We were excited to visit the Night Safari when we arrived in Chiang Mai.  In fact, it was one of the first attractions we went to after we got settled in.  And it was probably our most visited attraction for the entire time we’ve been here for a few simple reasons: feeding the animals is fun, its cheap if you go before 4pm, and there is a great play area for the kids!  Oh and there are lots of animals to see as well.

There are really 3 types of experiences you can have there.

When we first entered the grounds, we saw deer wandering around and had to be careful not to hit them. 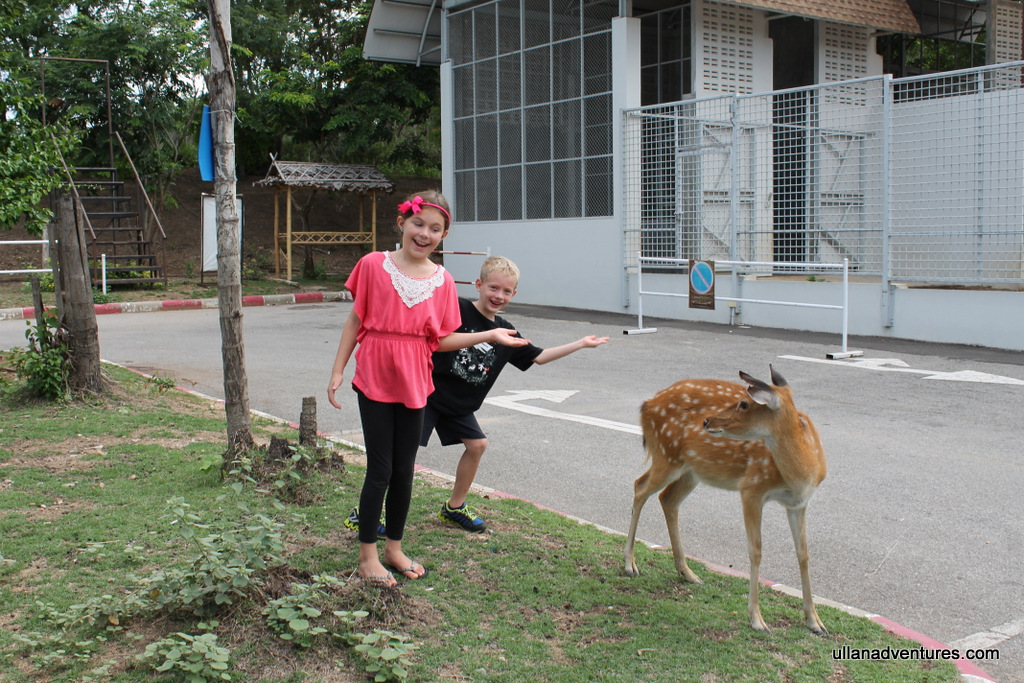 After you park, you’ll see giraffes and zebras in a huge enclosure and if its after 3pm, I think, there are people selling baskets of various plants to feed to the giraffes.  We’ve had a great time feeding the giraffes.   The best time was when I was bending over to feed the little giraffe and got knocked (hard!) upside the head which caused me to stumble.  I thought the big giraffe had just bumped into me but came to find out from Chuck and other spectators that the giraffe mistook my head for food and proceeded to try to eat my head before spitting me out.  To add insult to injury, he started stealing food out of my basket as I recovered and tried to figure out what exactly had happened. (In all seriousness, I wasn’t hurt and now it makes for a great story) 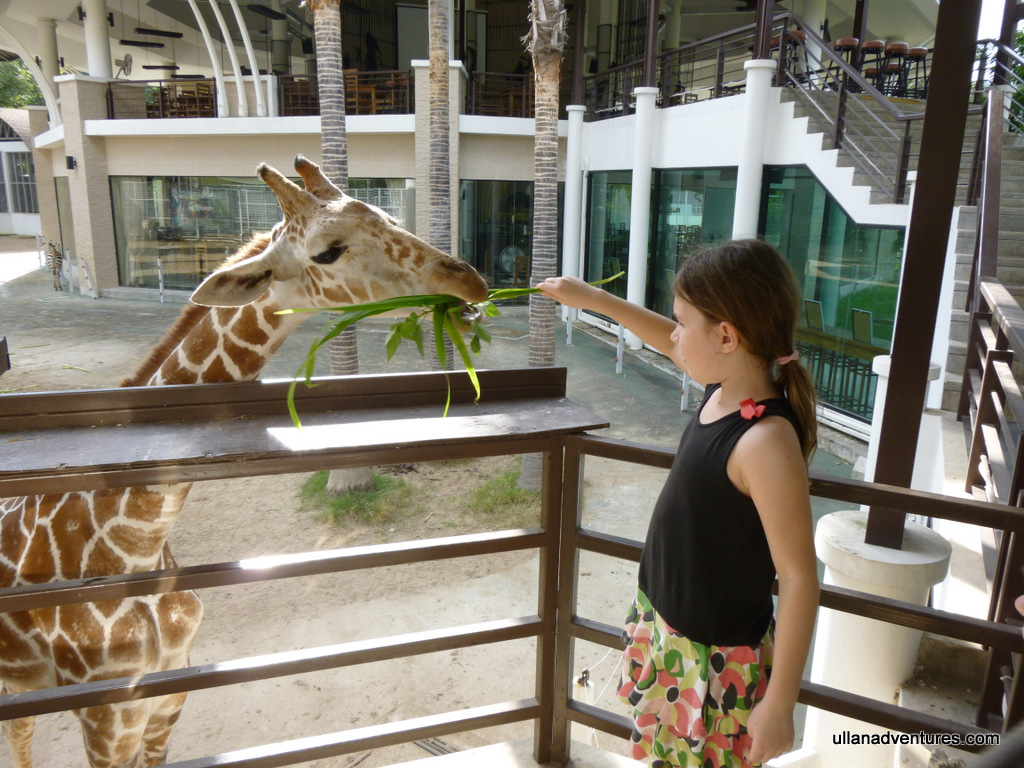 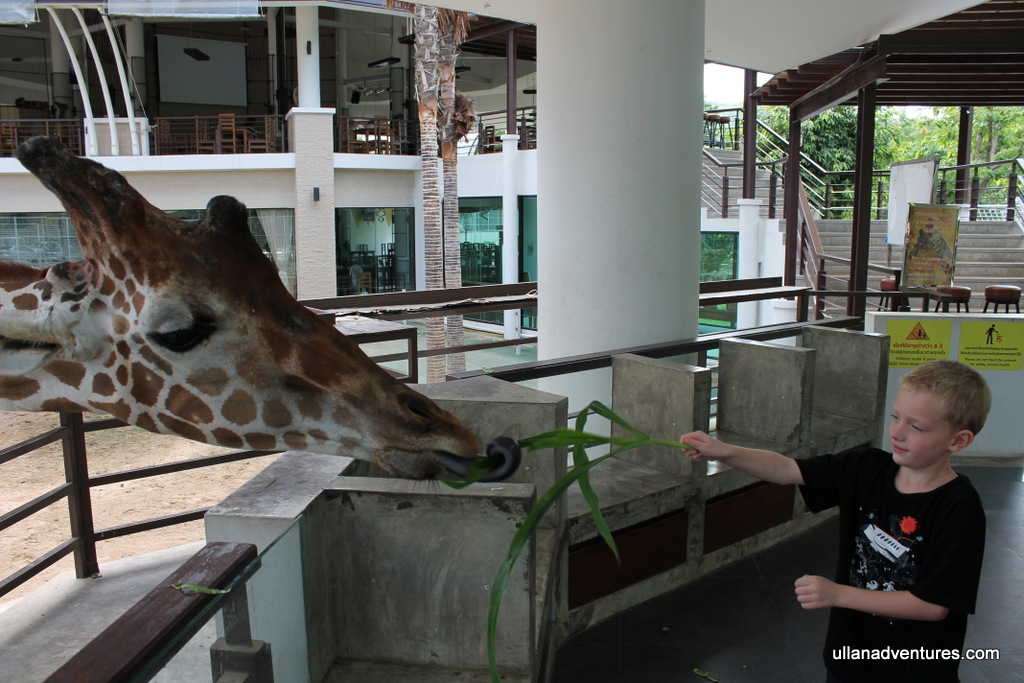 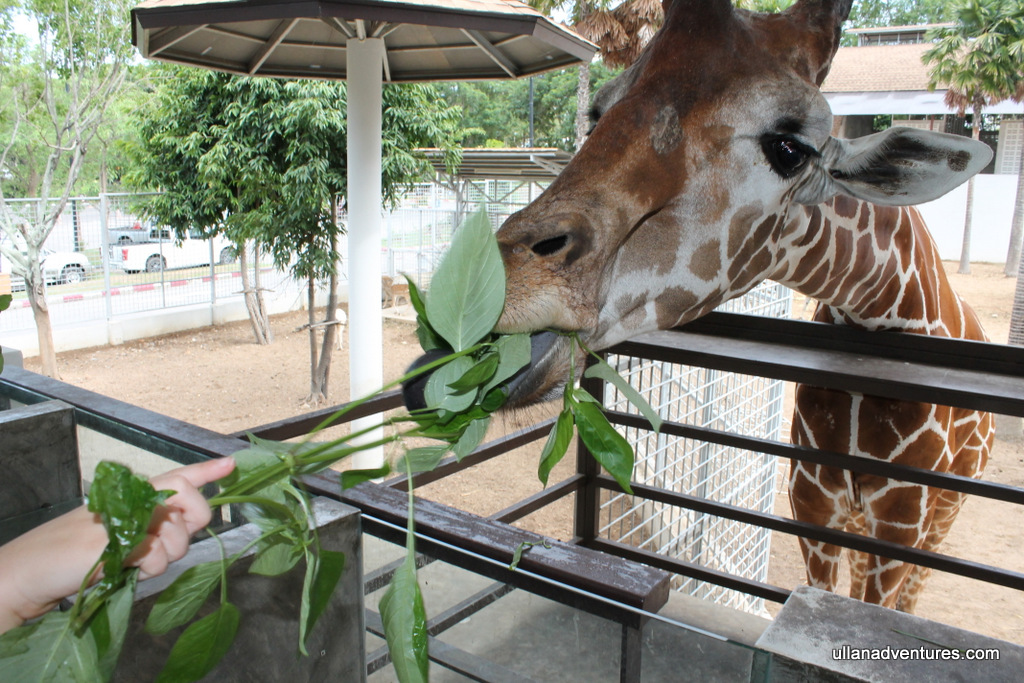 There are also deer you can feed and bunnies to watch.  Once done there, you start walking past the tiger cages.  Man these are some big boys.   There is also a little place where you can feed a baby tiger and get your picture taken for $5USD. 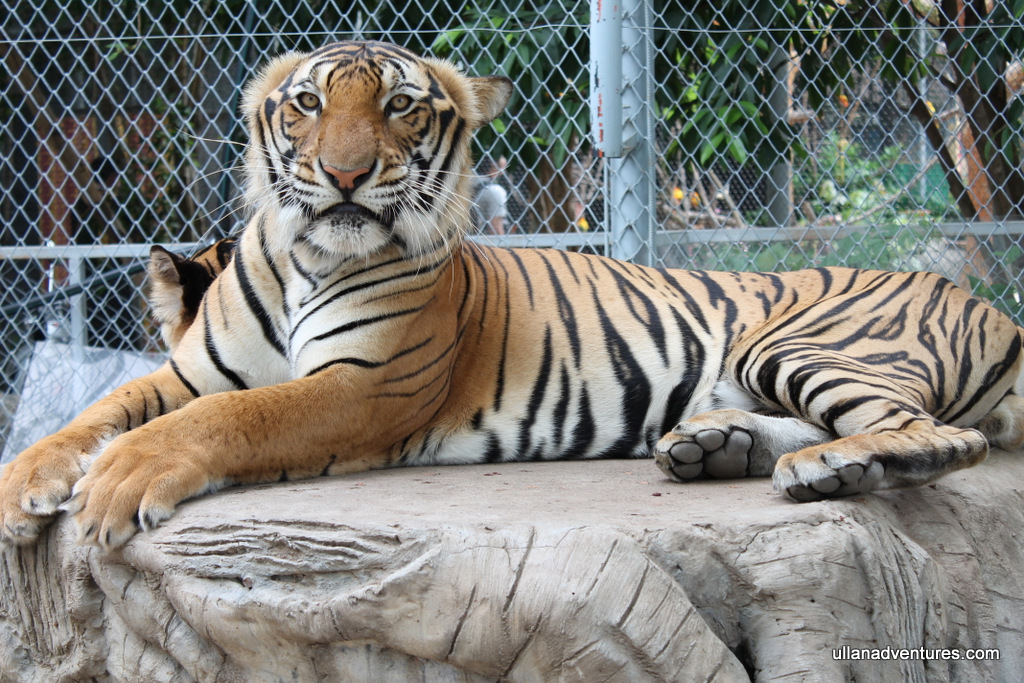 He doesn’t seem happy to have his picture taken 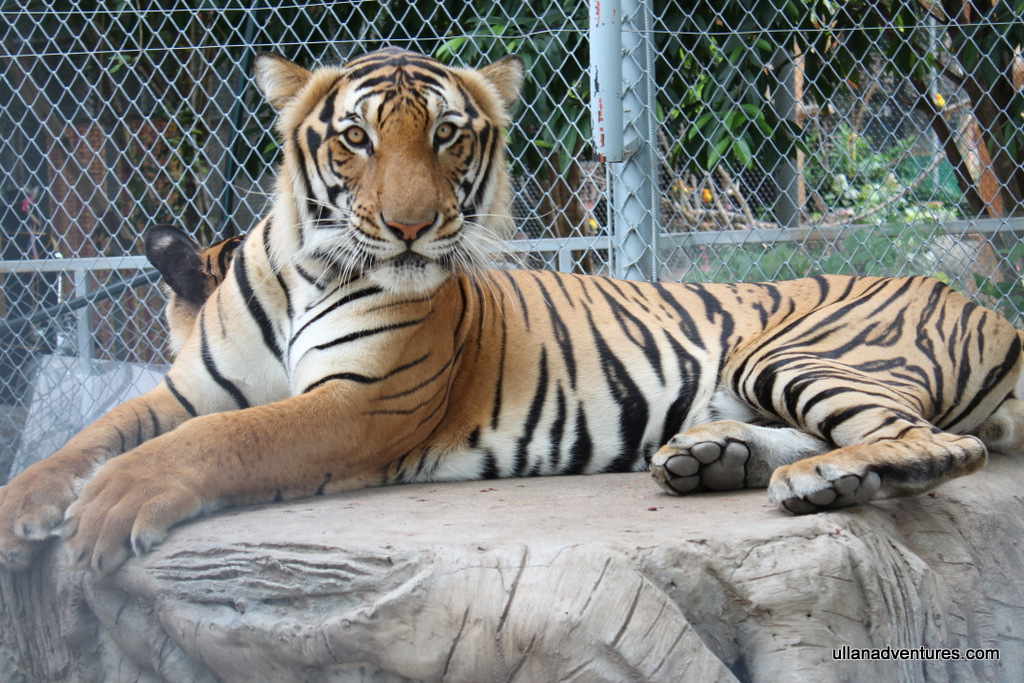 Behind the tiger cages is a bird enclosure where you can feed the sun conures.   This is so much fun as they’ll land on your hand and gently peck food off your palm.  Beck has been skittish about letting them land on him but once he was brave and let some eat off his hand.  Mara has been pretty fearless and lets them land all over her. 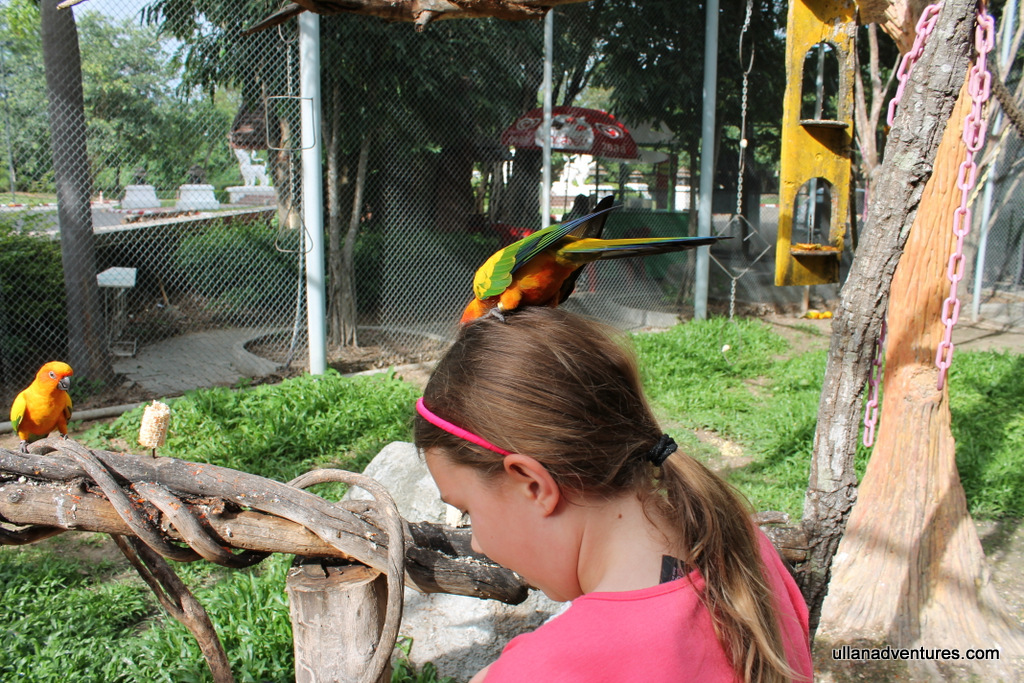 There is a bird on your head 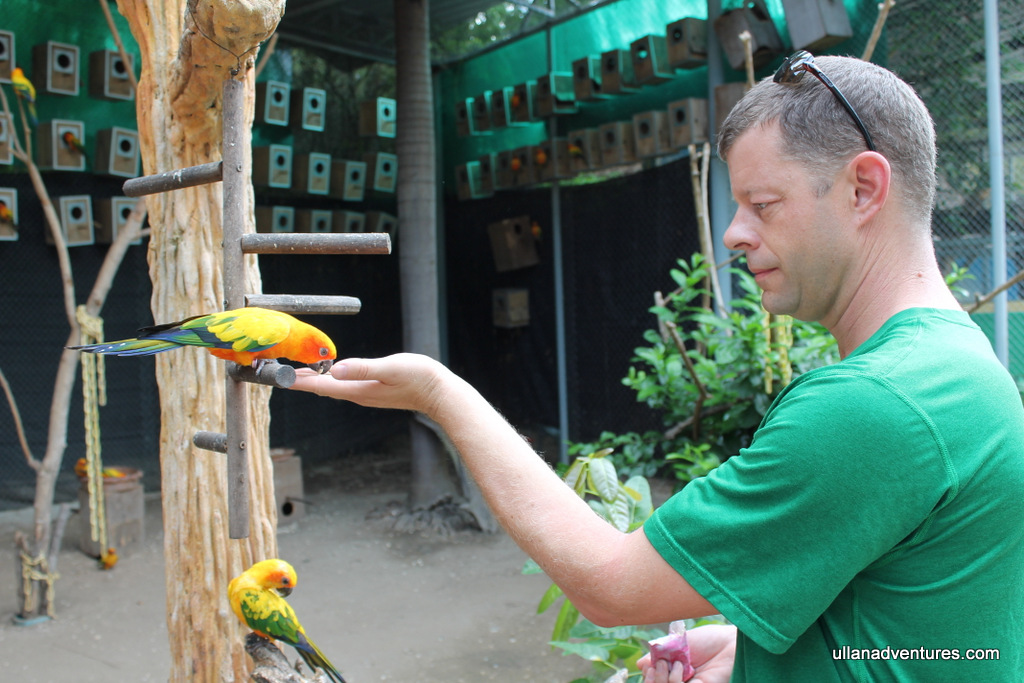 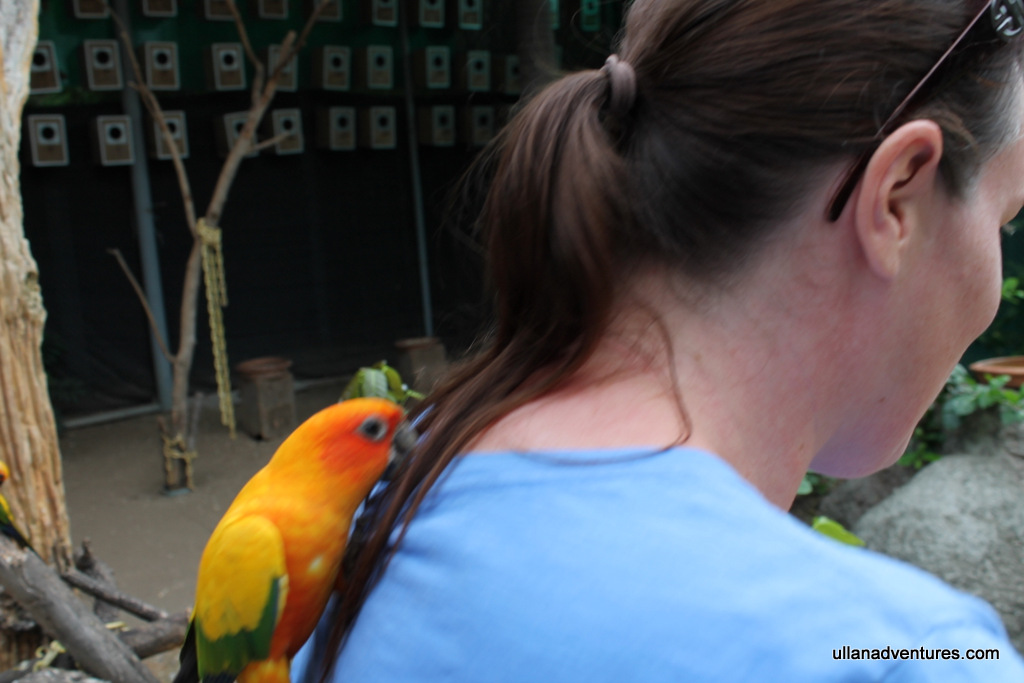 Why do animals keep trying to eat my hair?!? 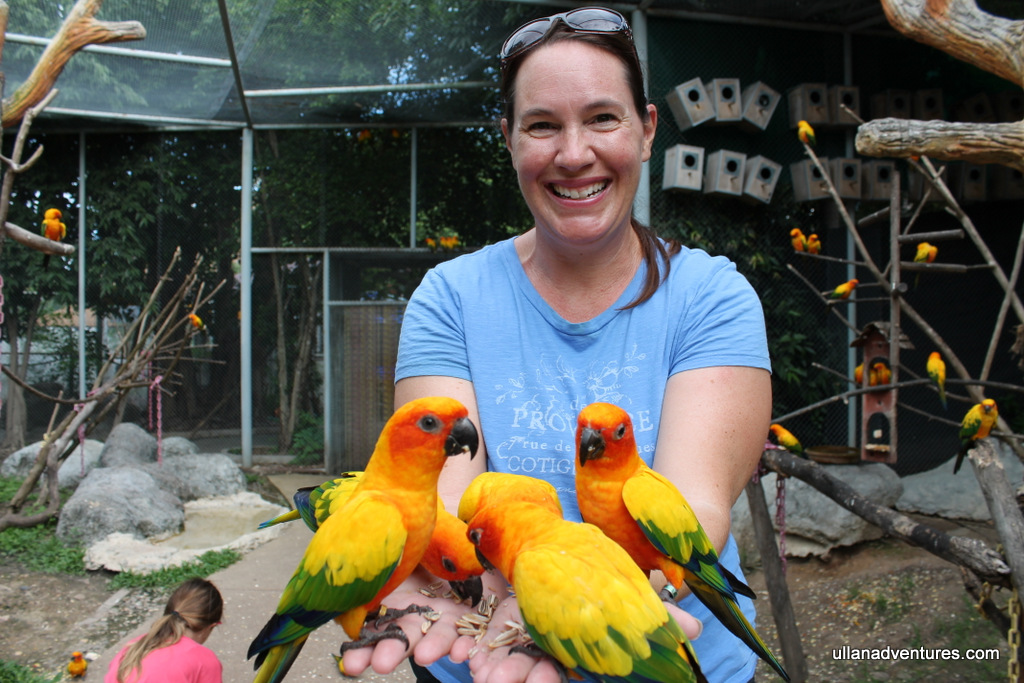 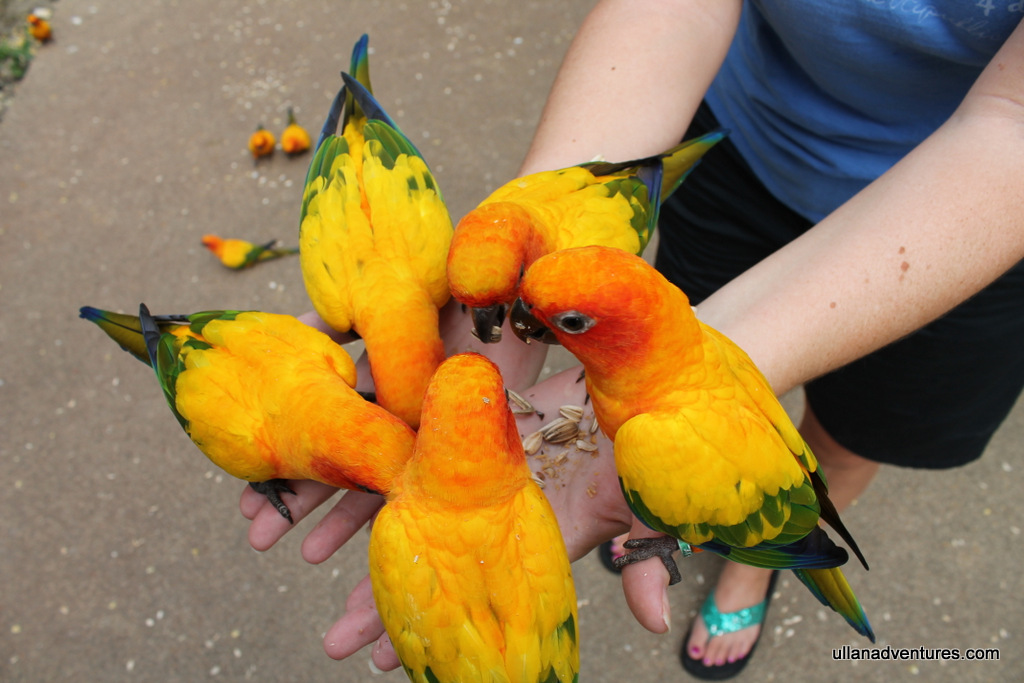 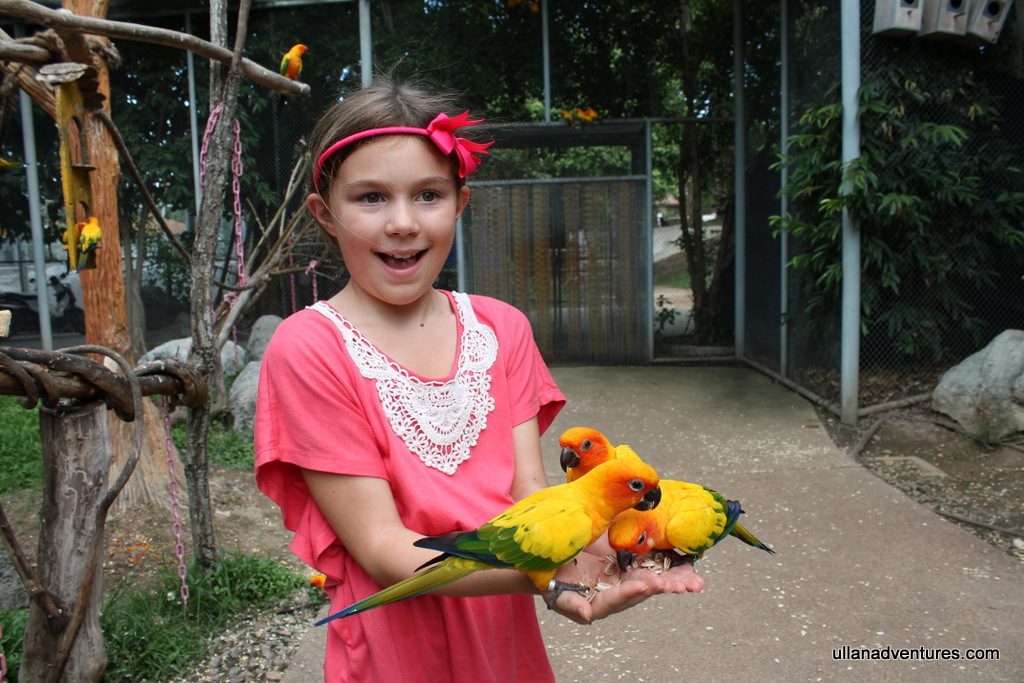 After we’re done with that part, we usually wander to the entrance and actually enter the park. (yes, you can enjoy the stuff outside for free).  From here, you can wander around to see the animals, attend a show if one is going on or head to the play area.  For 40Baht ($1.30), the kids get an hour at this great indoor/outdoor play area.  This was so nice to have during the rainy season and also made a great place to meet up with friends which allowed the kids to play while the adults could talk. 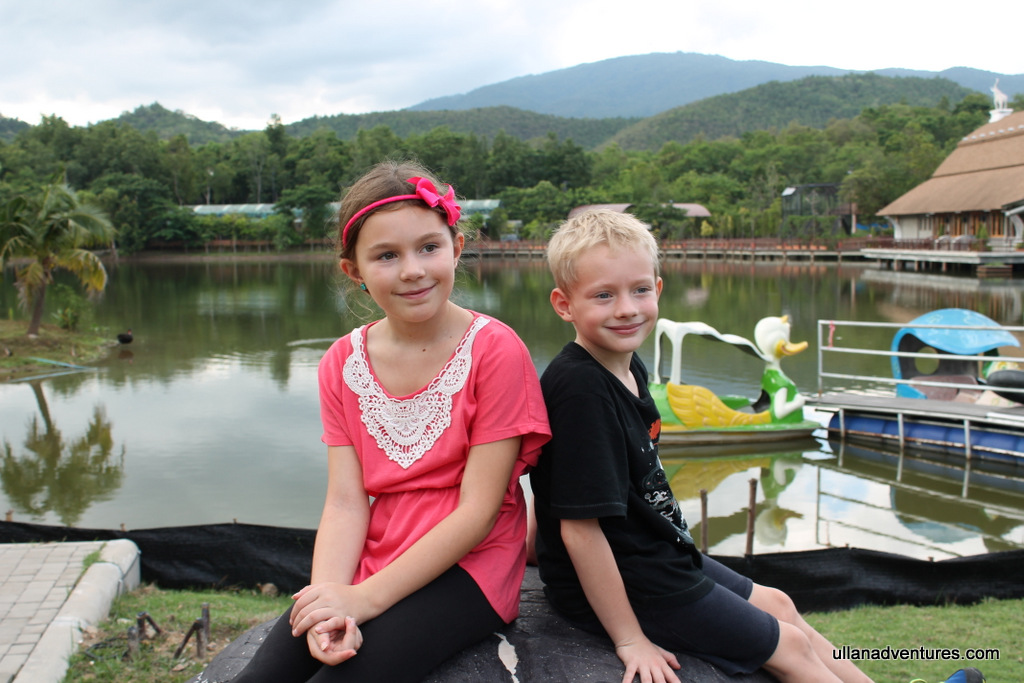 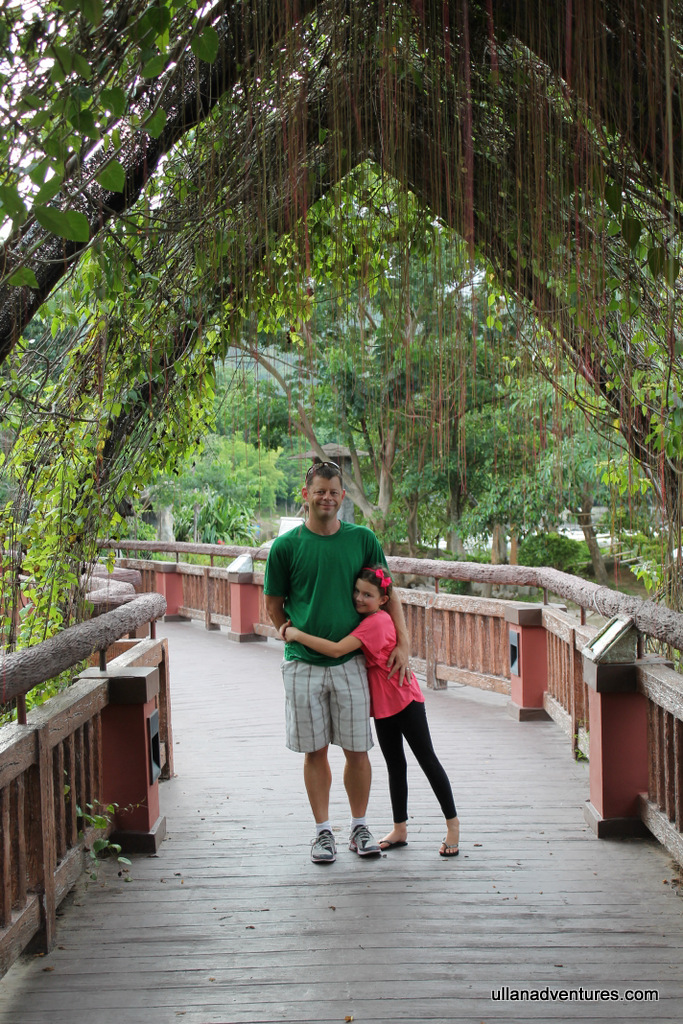 At night, there is definitely more to do.  There are show performances, once they brought out animals for us to hold, and one evening there were horseback rides. 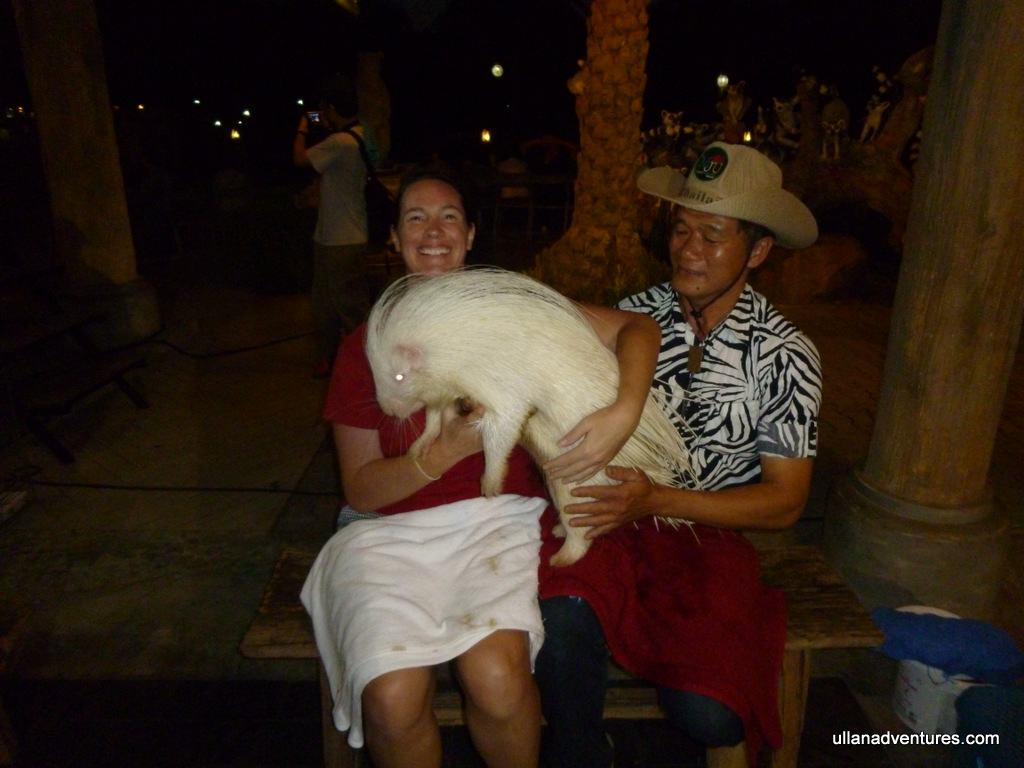 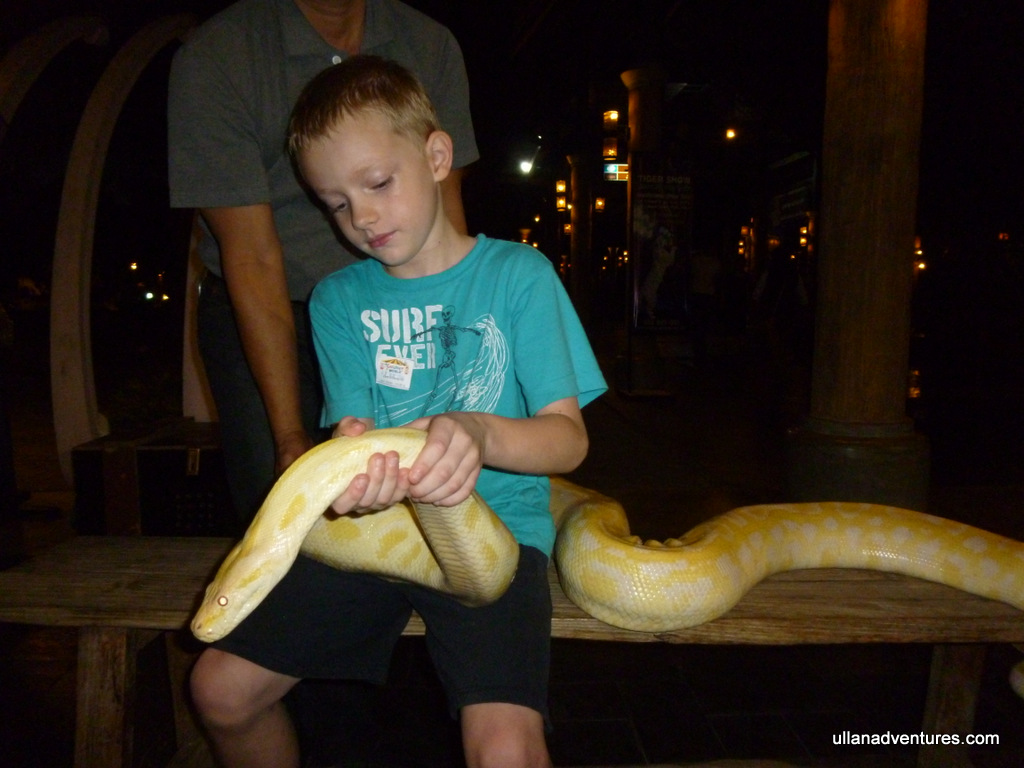 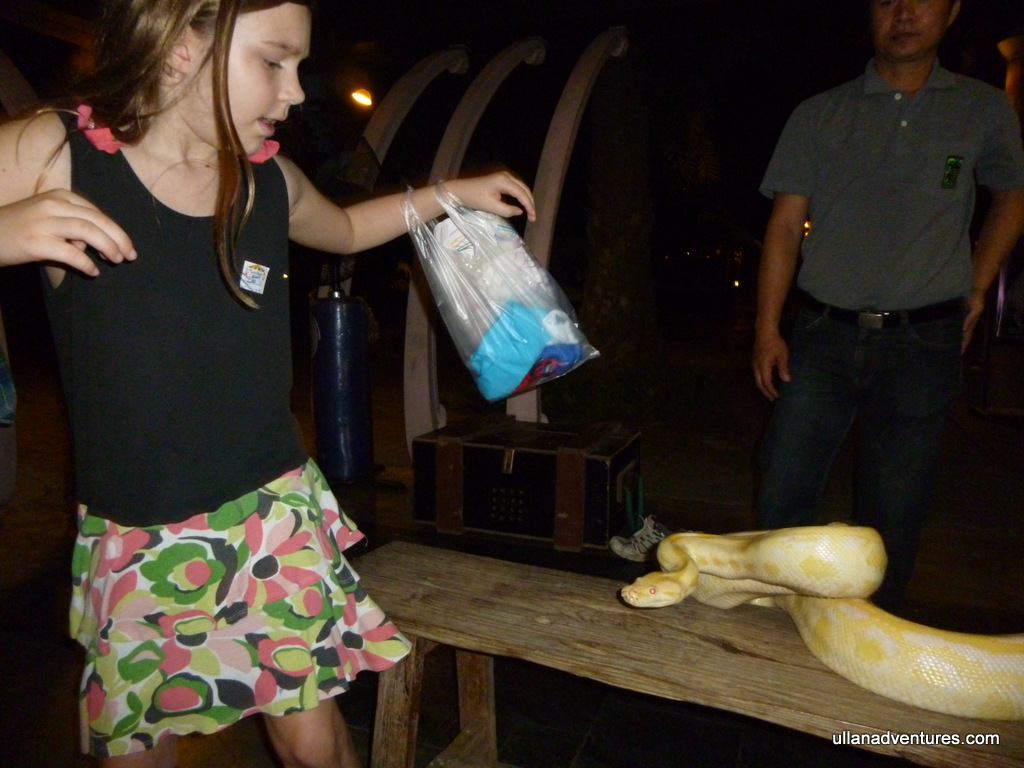 Yep, that’s pretty much my reaction to a python too 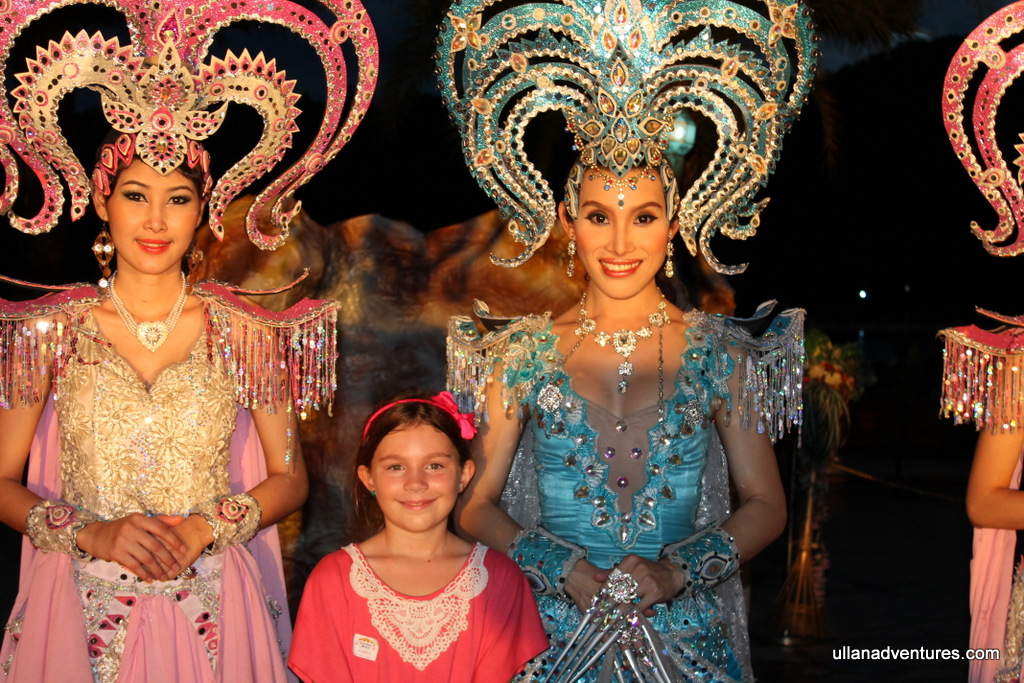 Some of the performers with Mara 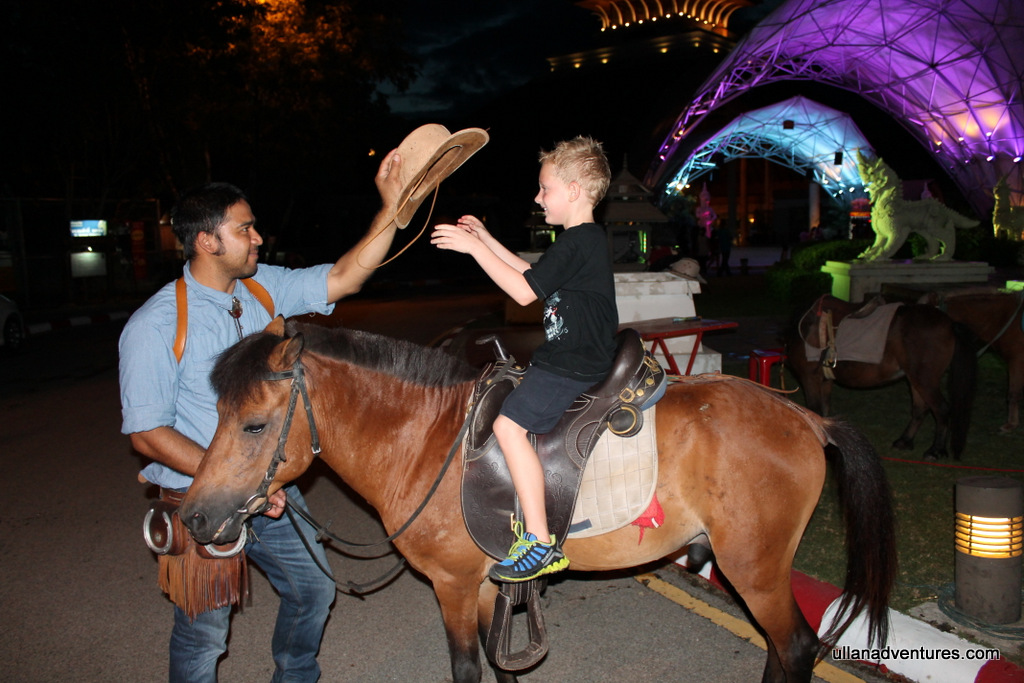 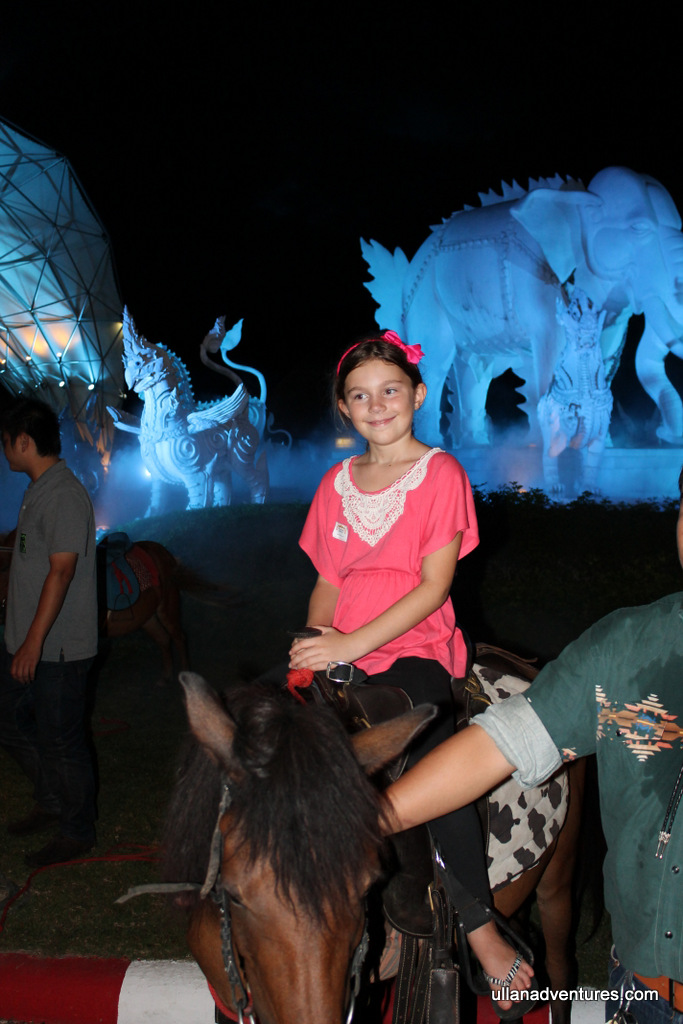 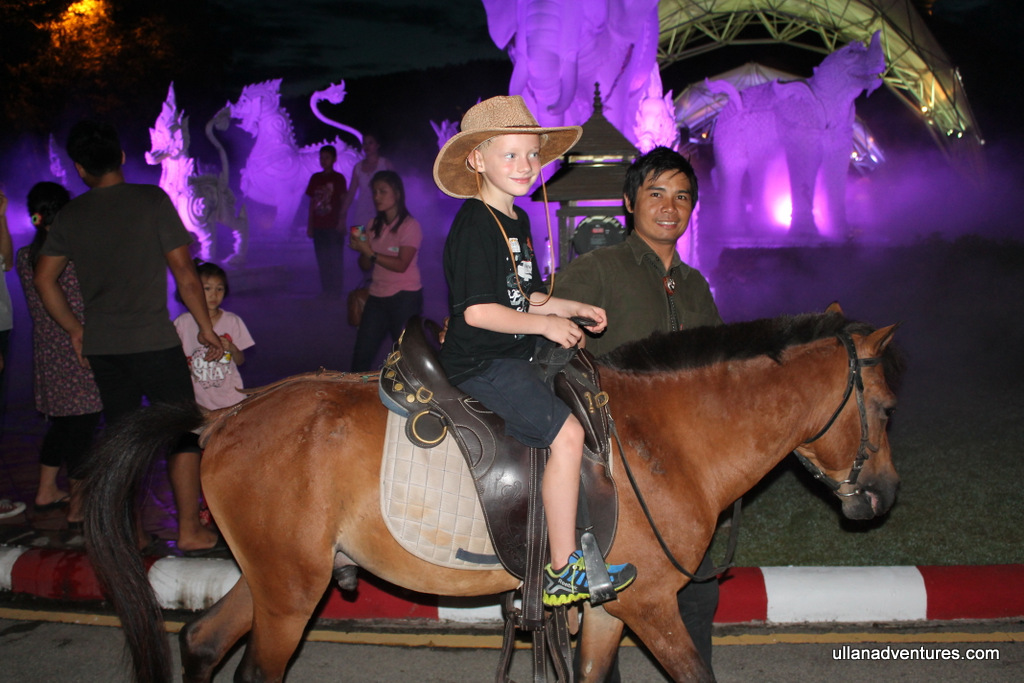 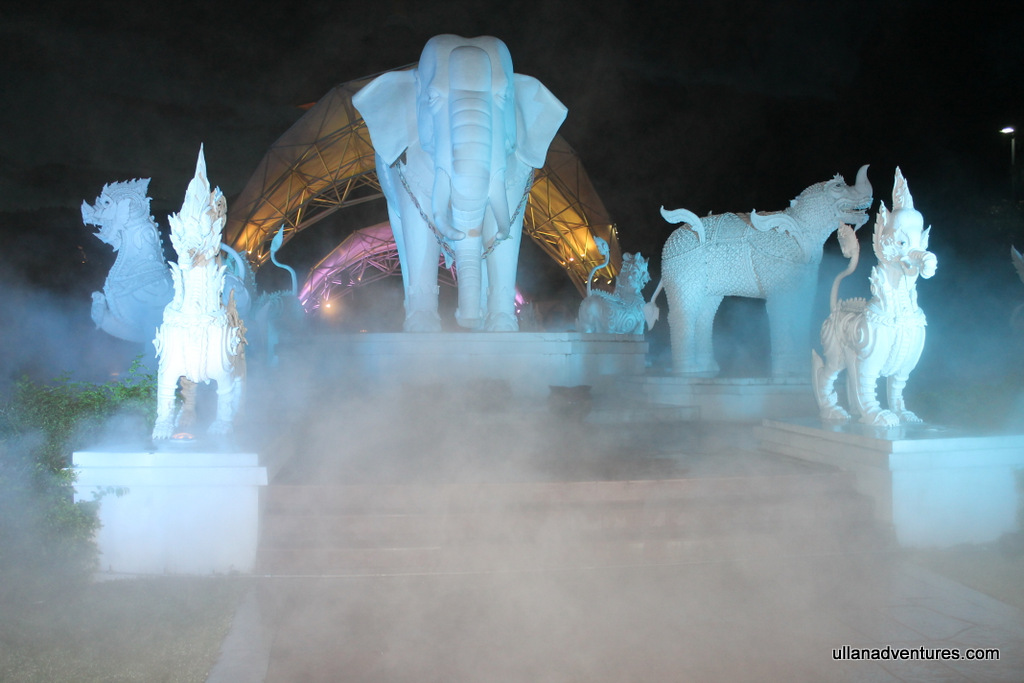 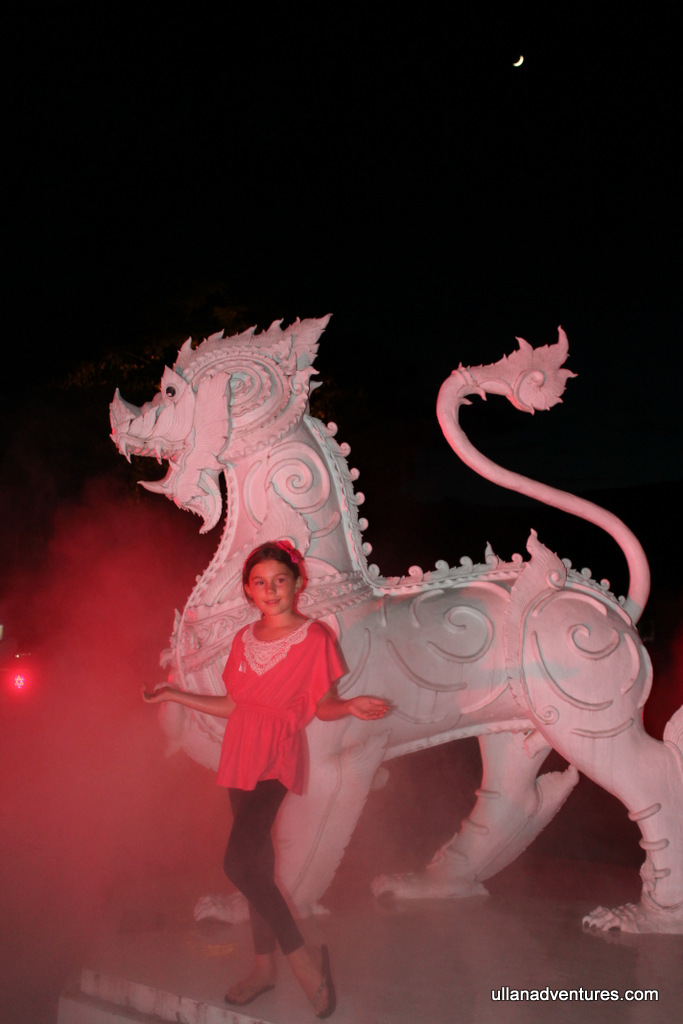 A few times we’ve eaten dinner at the Giraffe restaurant there (not the buffet restaurant downstairs, but the restaurant around the corner upstairs past where you feed the giraffes).  The restaurant overlooks the giraffe enclosure and tiger enclosures and the food is pretty decent and reasonably priced.

Overall, it’s definitely worth a daytime visit.  I’d recommend hanging out until about 6 or 7 pm to see all the animals and activities they bring out as the rush of tourists comes in for the safari.