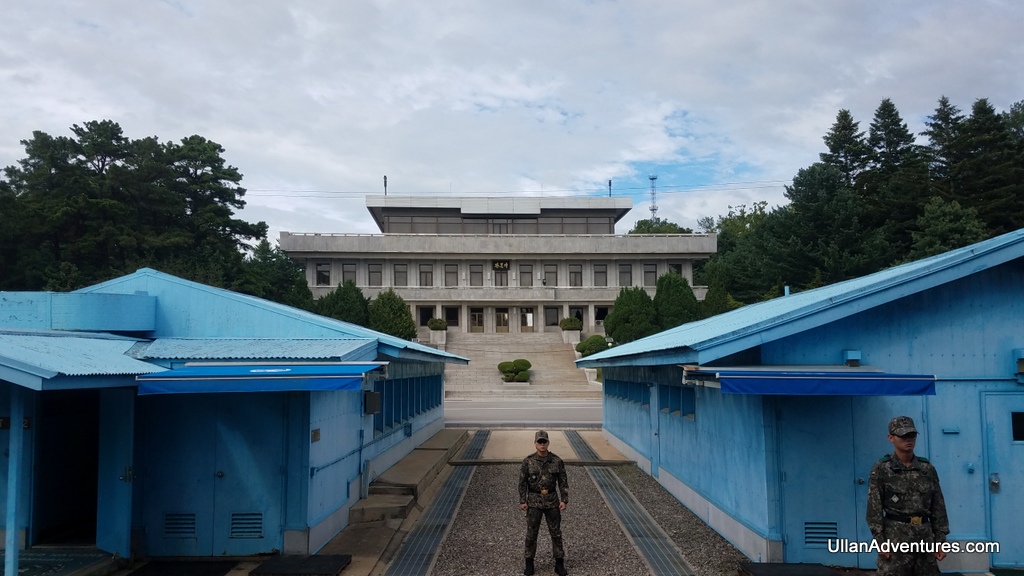 I remembering hearing about the DMZ growing up and learning a long time ago that Americans were allowed to visit and even step into North Korea.  For years, I knew if I ever made it to Korea, this would be at the top of my list.  So when I planned our trip to Japan, I made sure to include South Korea as part of the itinerary so I could include a trip to the DMZ too.

And then I started to stress.  I liked the idea, but man did it freak me out to go there.  Chuck and Mara weren’t phased, but Beckett was adamant that he wouldn’t go.  Cue lots of reading, researching, thinking about it, and more reading.  Ultimately, we decided that it would be safe as people had been doing this for years and years and years without a single incident.

That didn’t stop Beckett from refusing to go though.  Unfortunately, he couldn’t stay home by himself, so reluctantly he went along.  Chuck and Mara were excited.  I was still freaked.

We took a tour – you have to – that handled everything for us.  We boarded a motor coach around 8am and drove about 90 minutes to the border.  Our first stop was lunch. 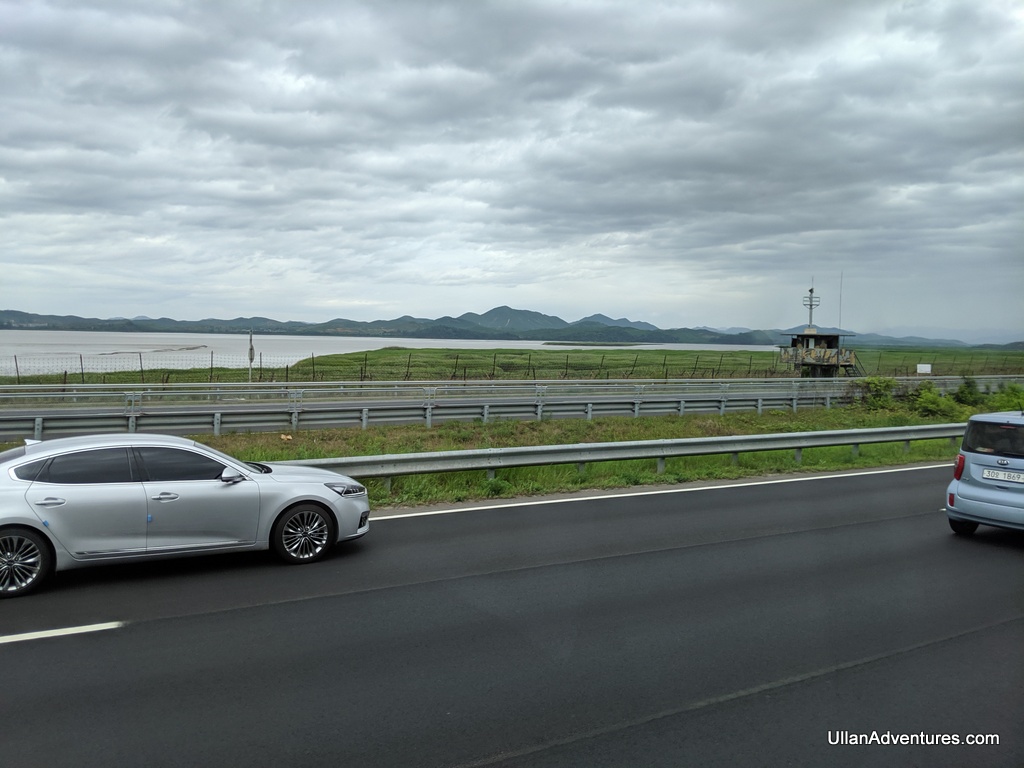 Our first view of North Korea across the water 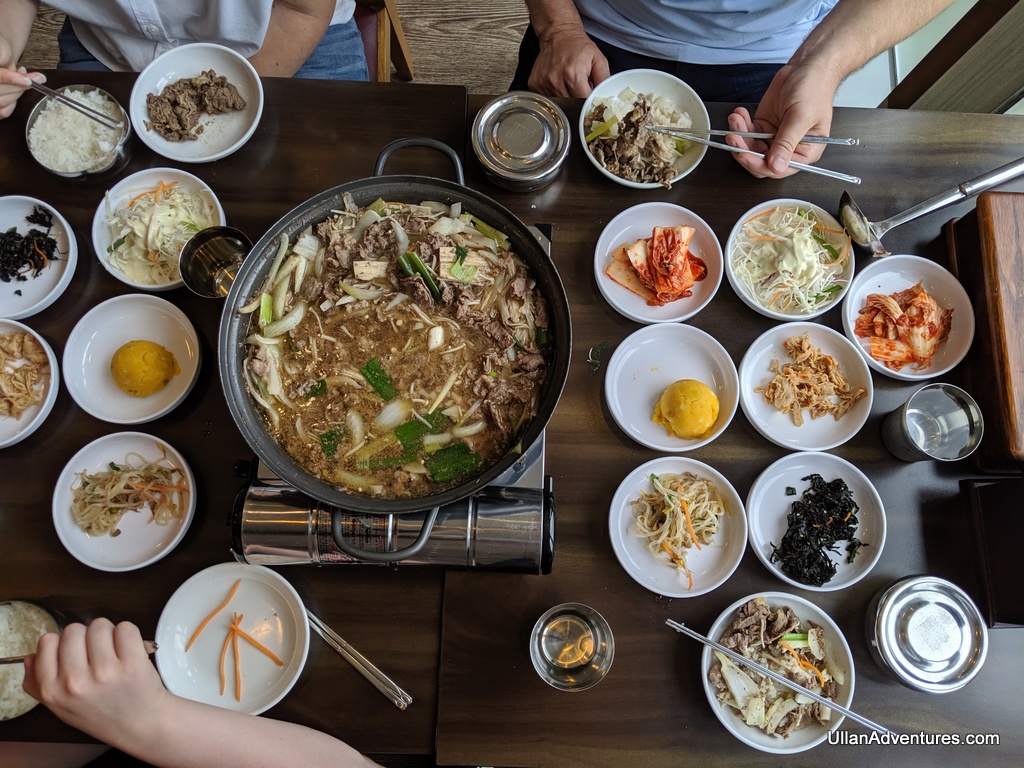 After lunch, it was off to the Dora Observatory, where we got a look at the border and into North Korea.  It was fascinating to look into North Korea and see people going about their lives. 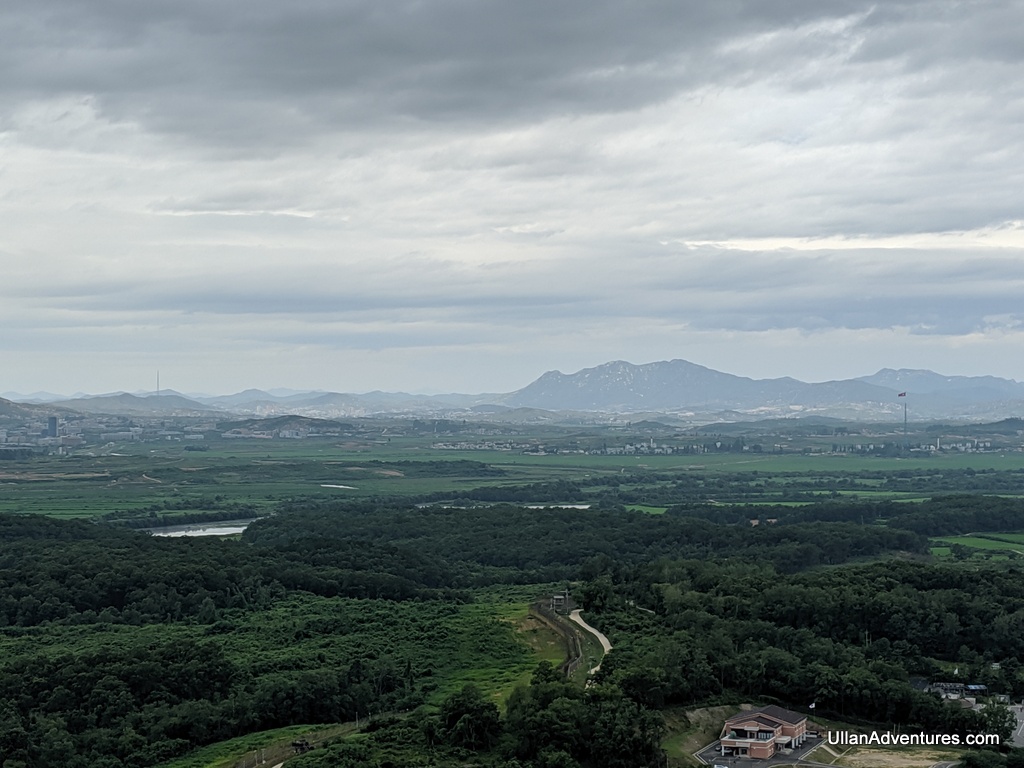 South Korea in the foreground and North Korea across the river 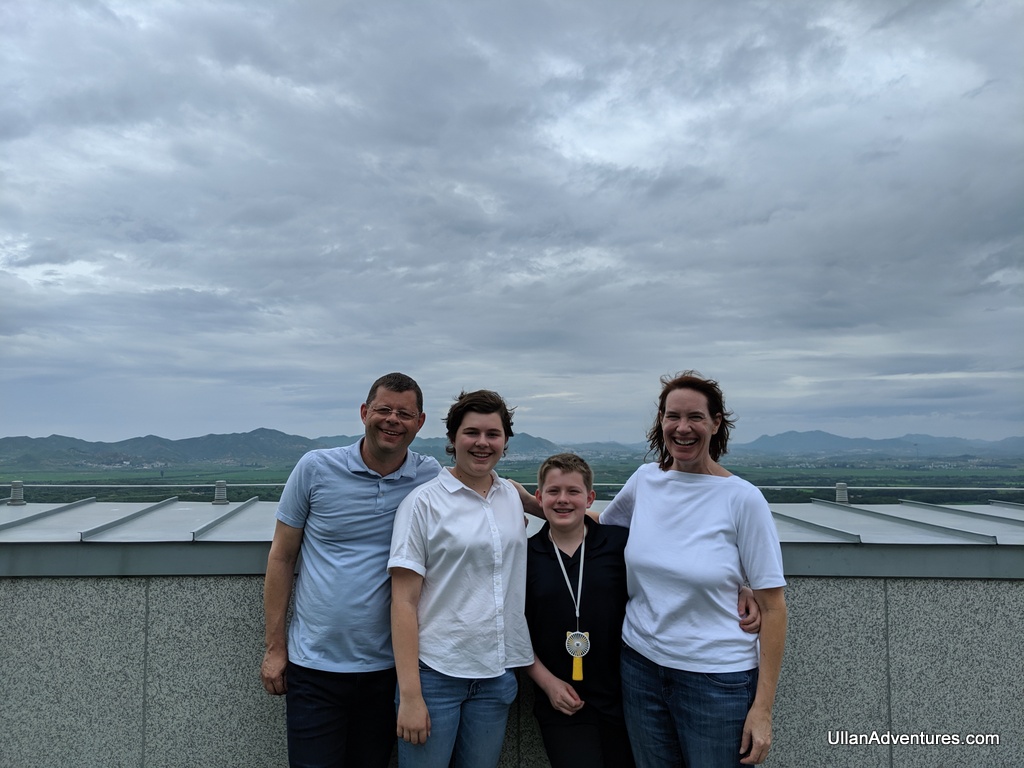 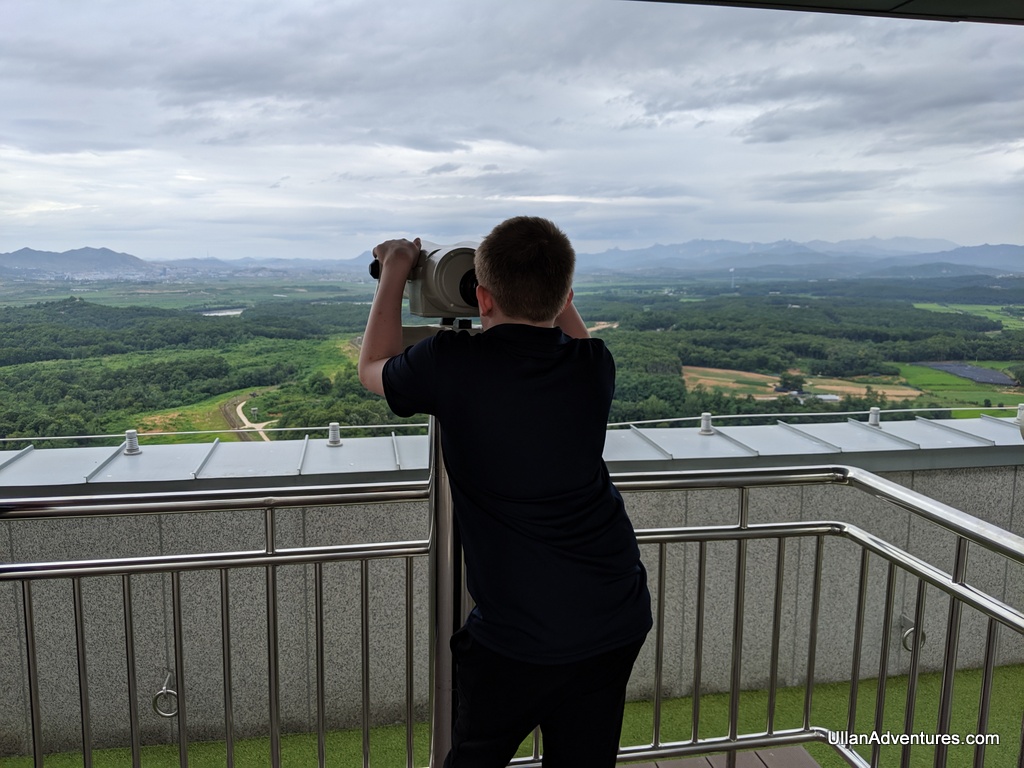 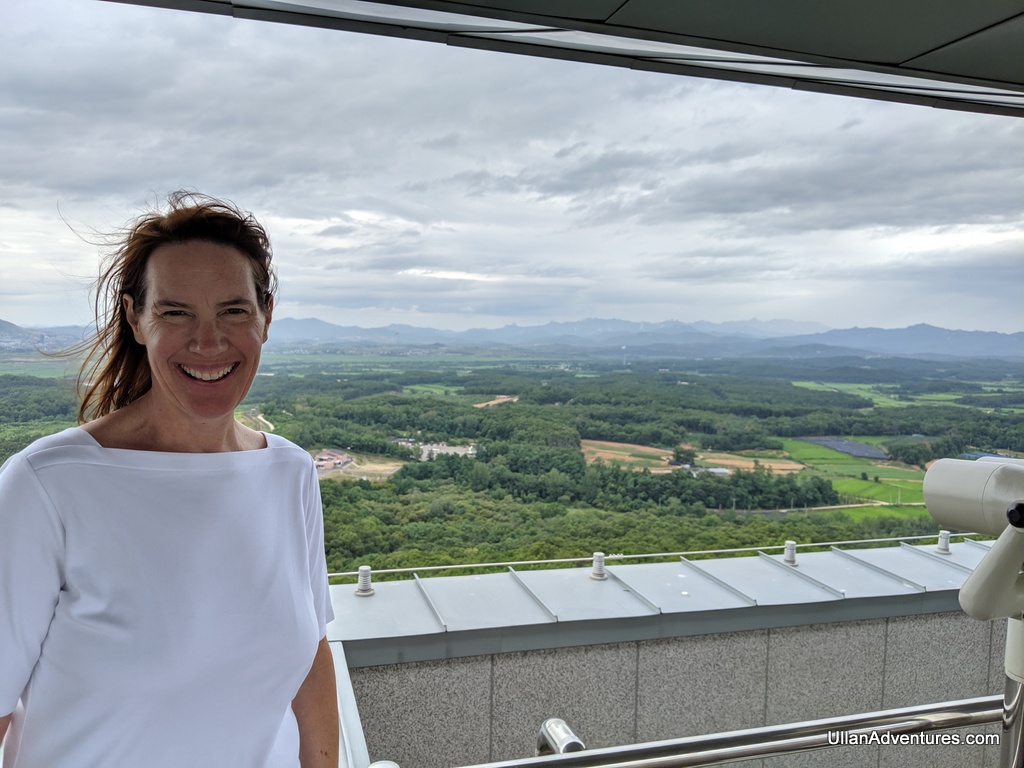 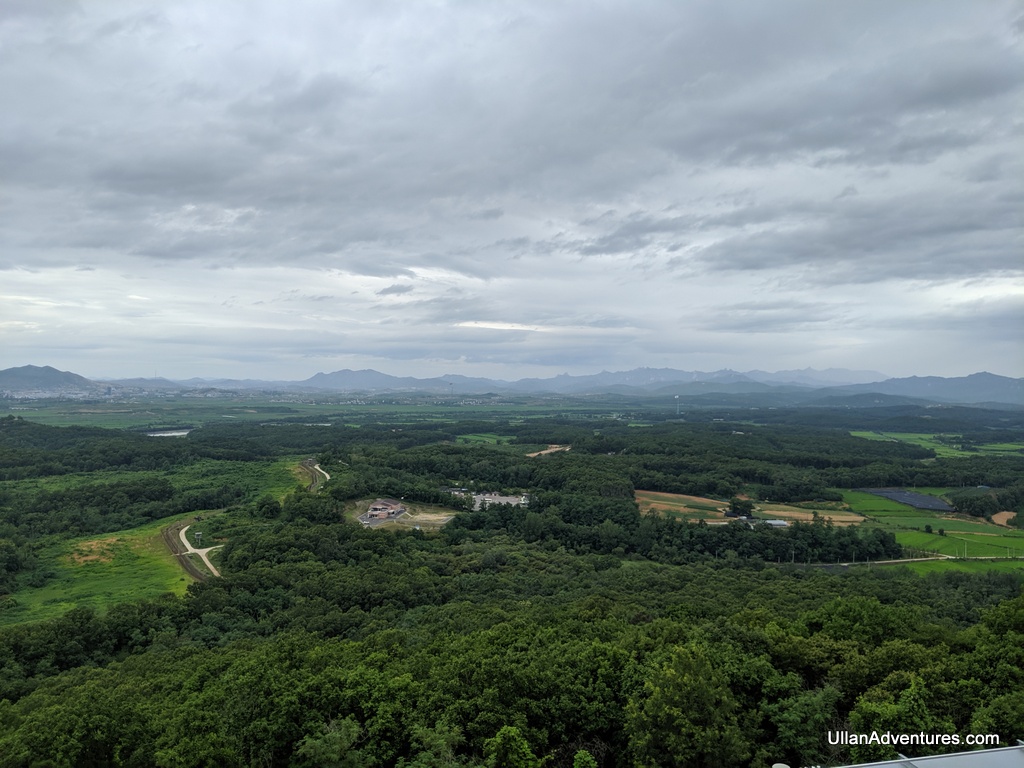 After that, we went to the 3rd Infiltration Tunnel.  This was one of the tunnels the South Koreans discovered that led from North Korea into South Korea.  You first watch a video, then get into a little mining train and descend in a very narrow tunnel a good 5 minutes deep into the earth.  Beckett was pretty freaked out by this, so once we got to the bottom, Chuck and Mara got out to explore the tunnel, while I rode back up with Beckett.

There didn’t seem to be much down there, just a long walk to a door that was at the border between North and South Korea. 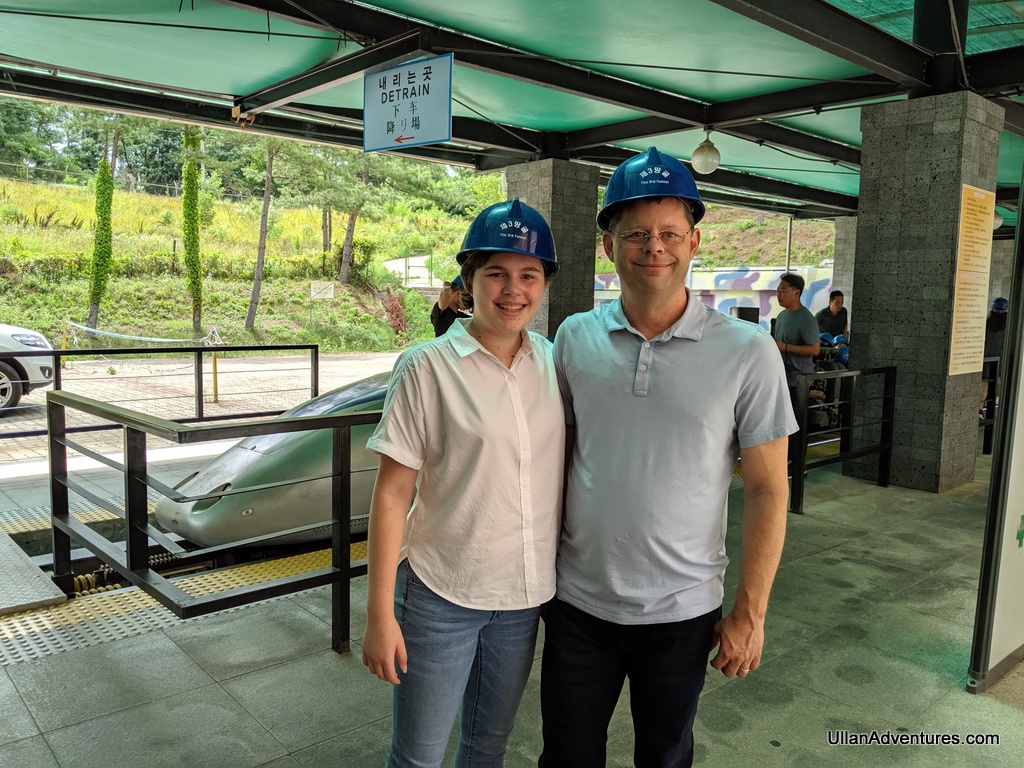 Then we had a few minutes to take some pictures before we went to the main event. 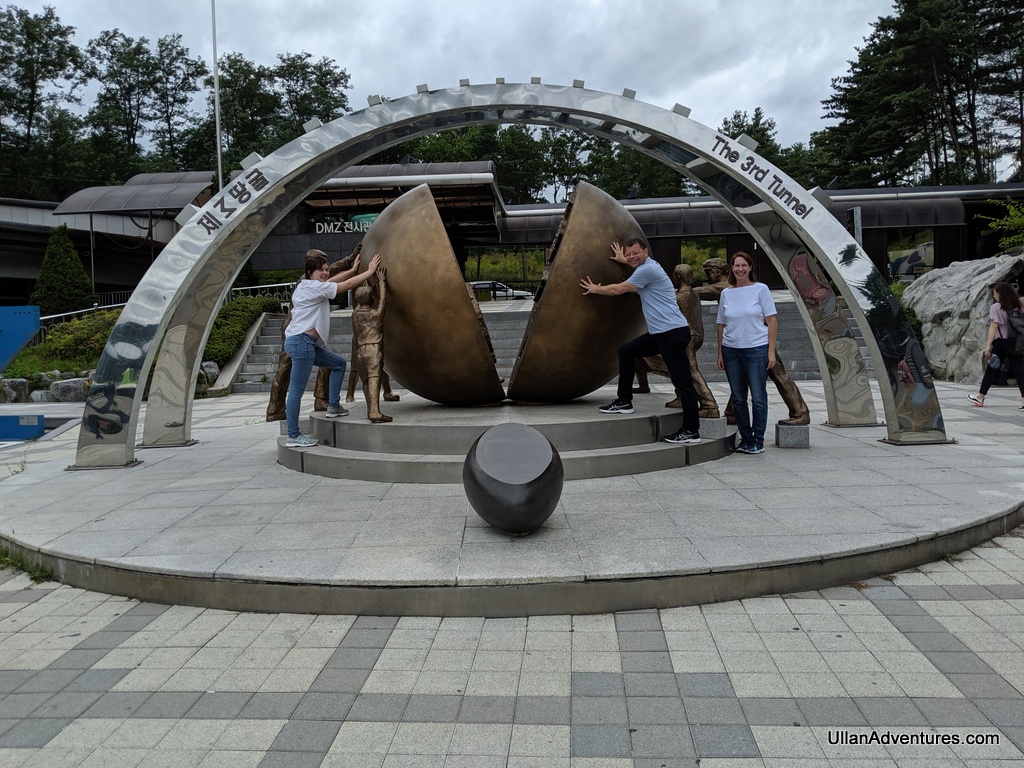 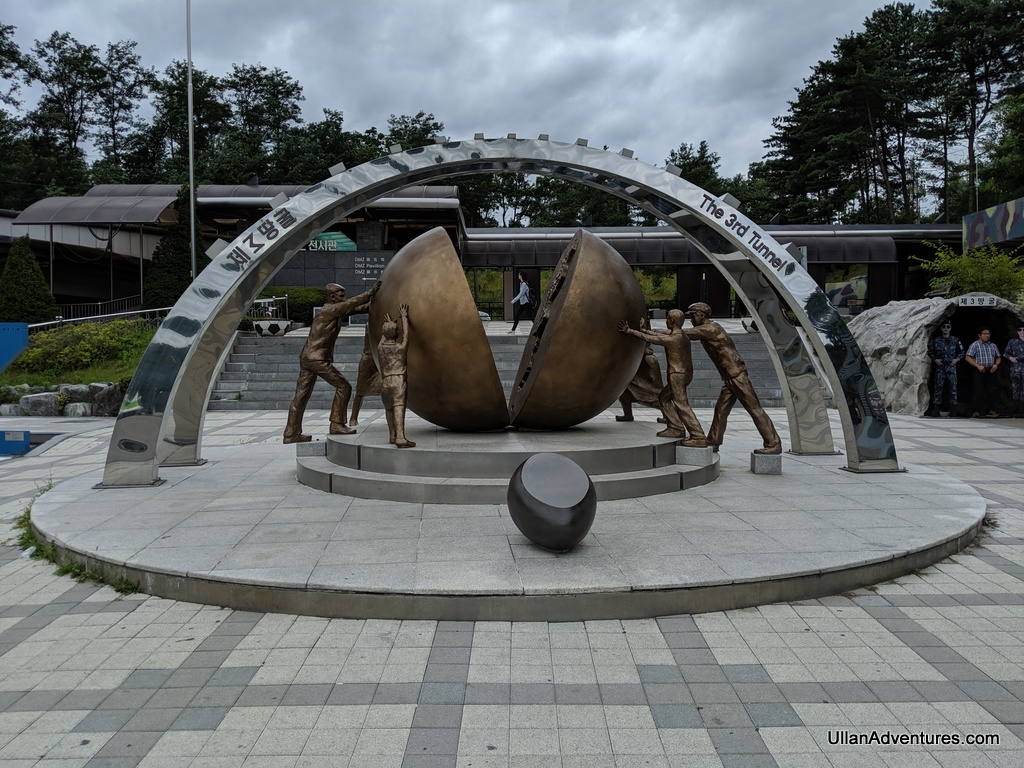 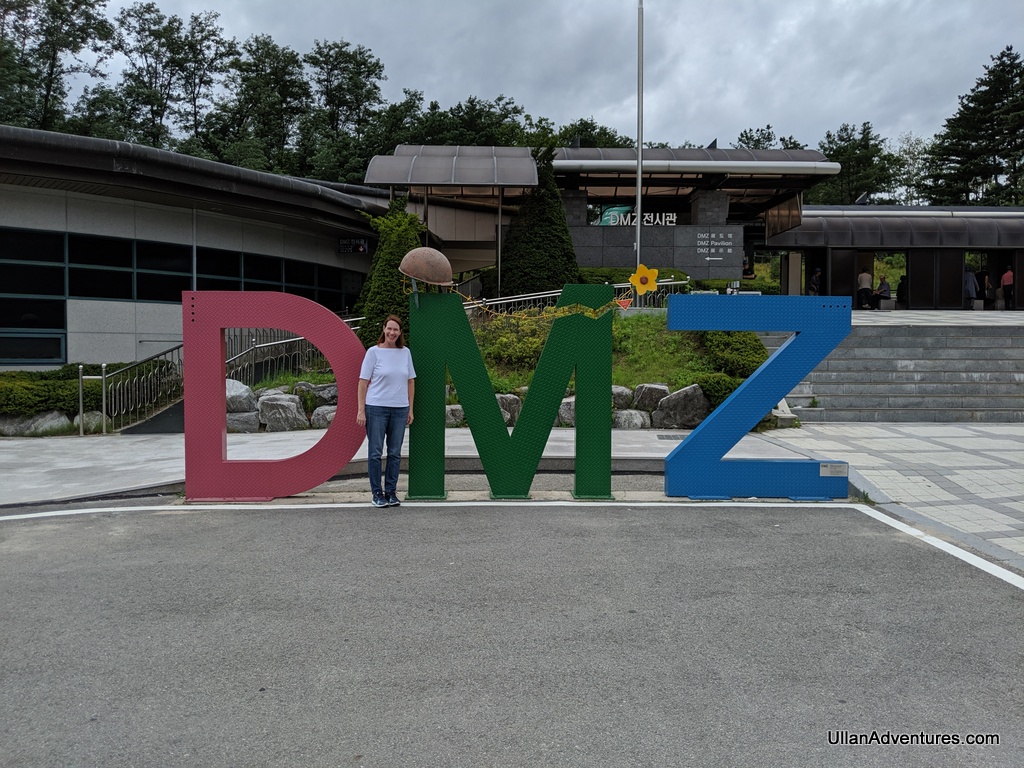 Then we headed to Camp Bonifas which is the UN Command military post located just south of the border.  We joined with other tours and went into an auditorium for a security briefing.  We also had to sign some paperwork basically acknowledging the danger we were about to take.

As we boarded the buses to go to the border, Beckett started to freak out and refused to go.  I felt so bad for him, but at this point, there was no way to stay behind.  One of the American soldiers came up to talk to him, and told him that they would stay by his side the entire time to make sure he was safe.  And he did.  The guy was so nice and really made sure Beckett was ok.

After a short drive, it was showtime as we arrived at the Joint Security Area (JSA). 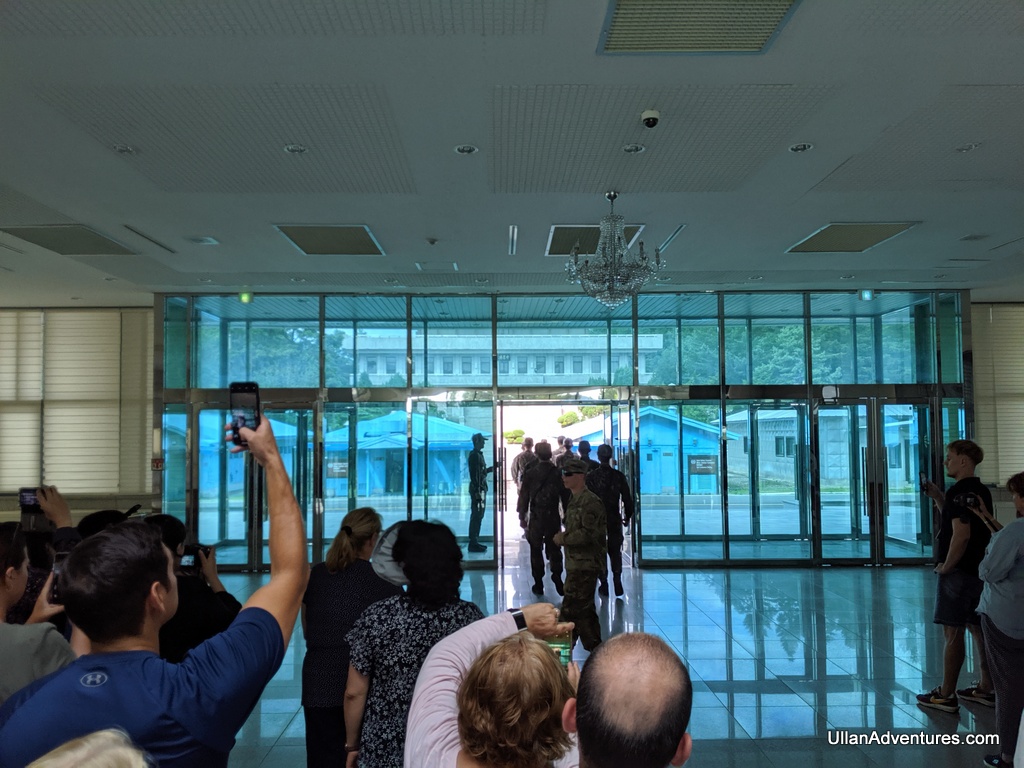 We then got to stand at a place I’ve seen in pictures so many times.  It was surreal.  You can see that Beckett is less than thrilled to be here. 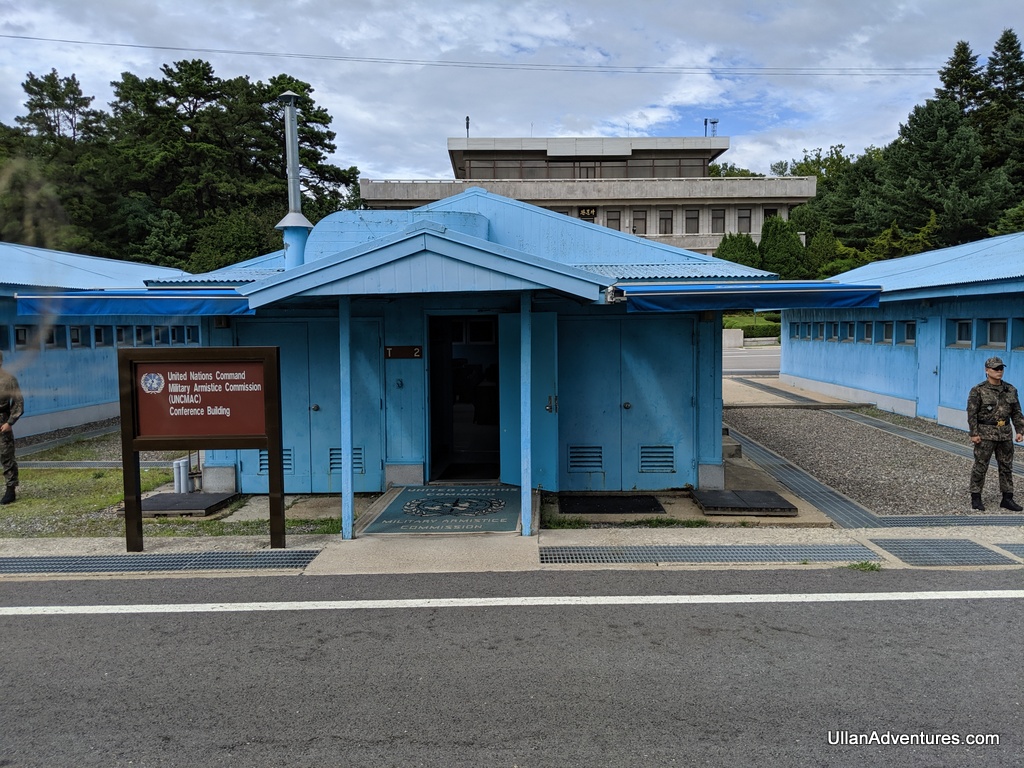 After another briefing, it was our turn to enter the building.  The soldier went into North Korea and talked for a bit, before he told us we were allowed to enter the North Korean side. 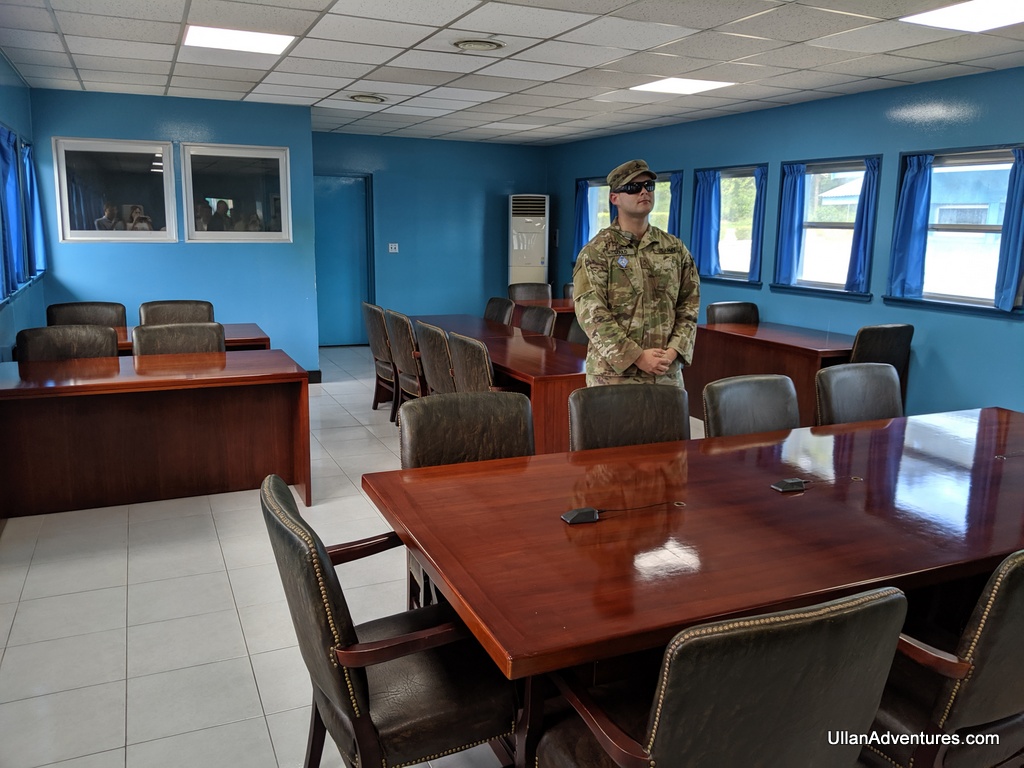 We’re in South Korea, and he is in North Korea.  The microphones on the table mark the border.

This next part happened so fast.  We walked into North Korea, took some selfies, and before I knew it, they were telling us we had to leave.  I think we only got 2 minutes on the North Korean side so I didn’t get the pictures or videos that I would’ve liked.  It didn’t help that there were so many of us in the room, that its not that we had much of a chance anyway.

Still, WE STOOD IN NORTH KOREA!!!

Walking across the border into North Korea 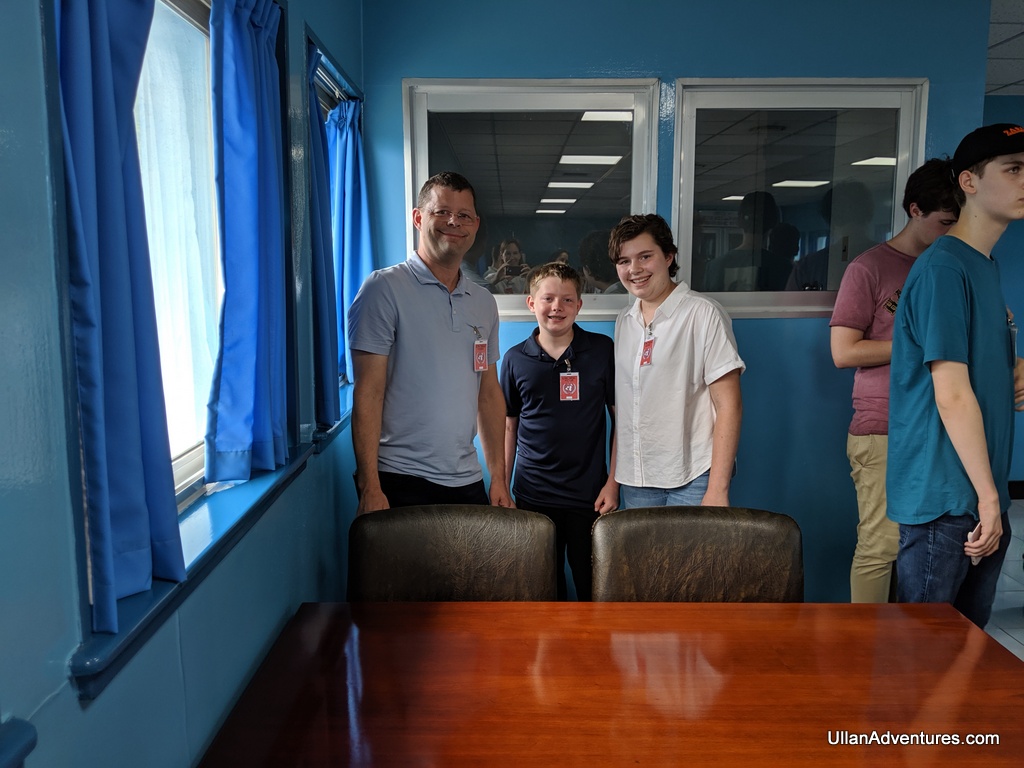 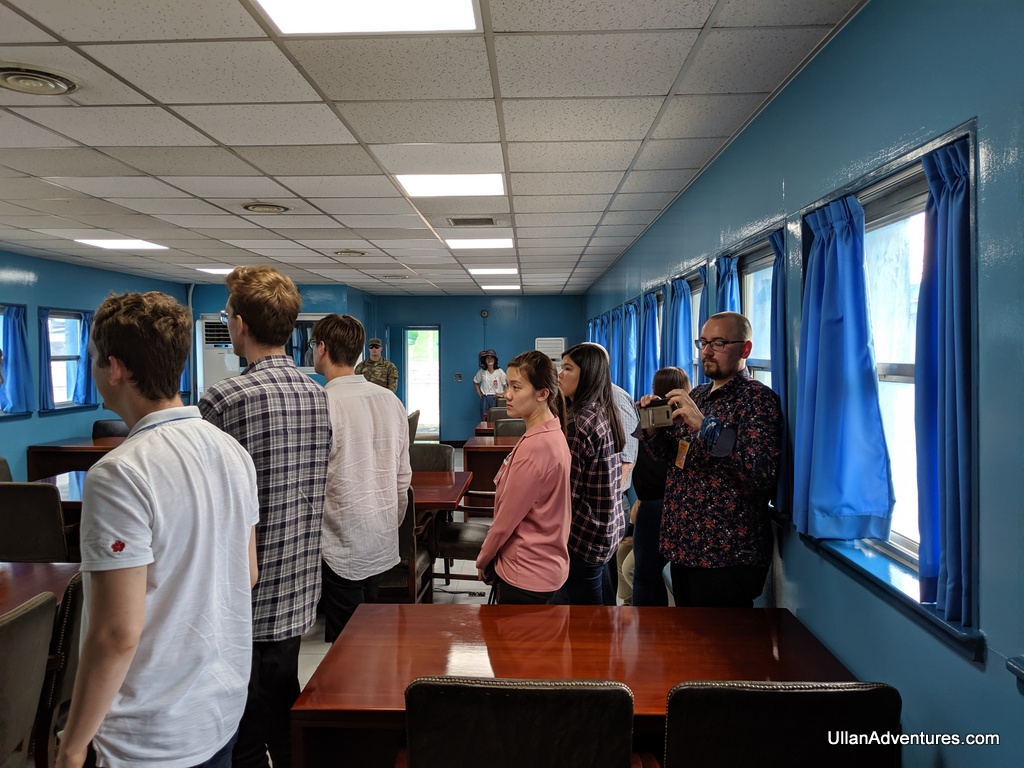 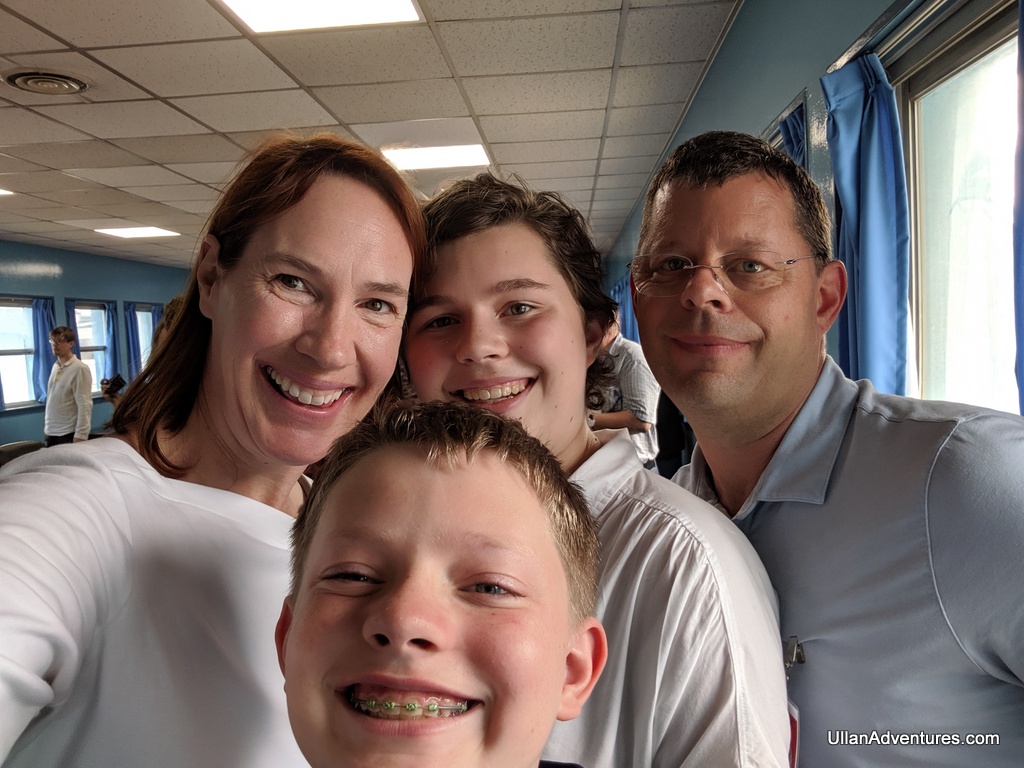 In North Korea with the background as South Korea

And then it was over and we were back outside.

Despite Beckett’s initial resistance, he was over the moon once we entered the building and stood in North Korea!

From there, we walked down to the Blue Bridge where Moon Jae In and Kim Jong Un had a historic, private conversation in April 2018. 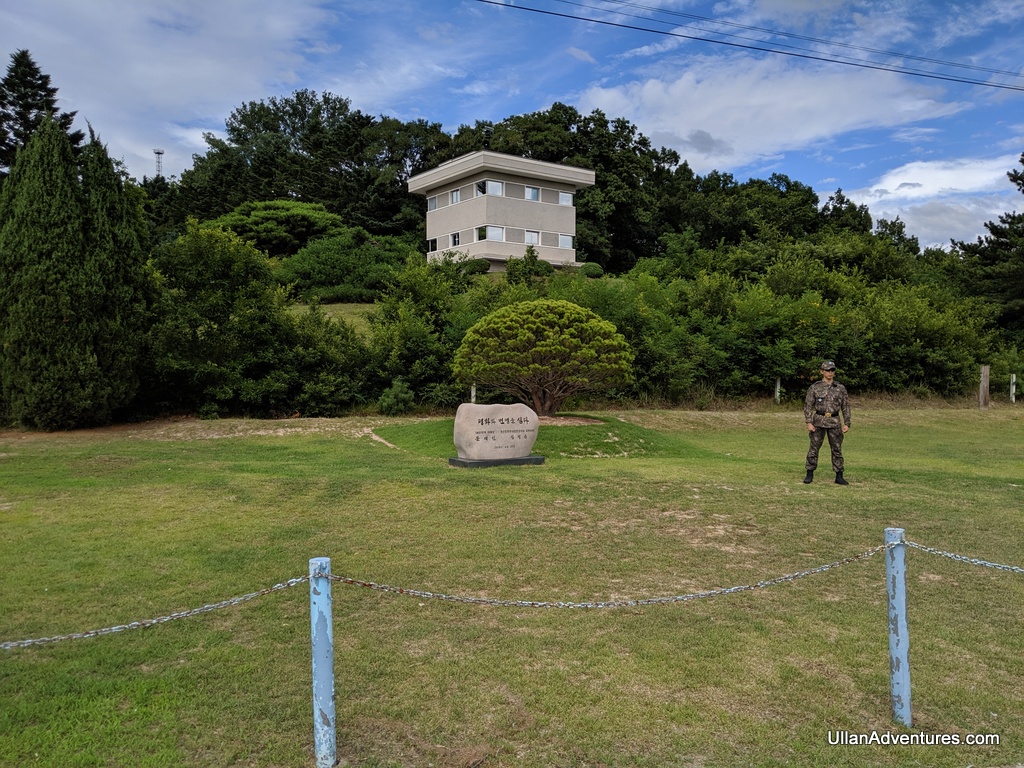 We also got some time to take pictures of the Freedom House before boarding the buses and heading back to Camp Bonifas. 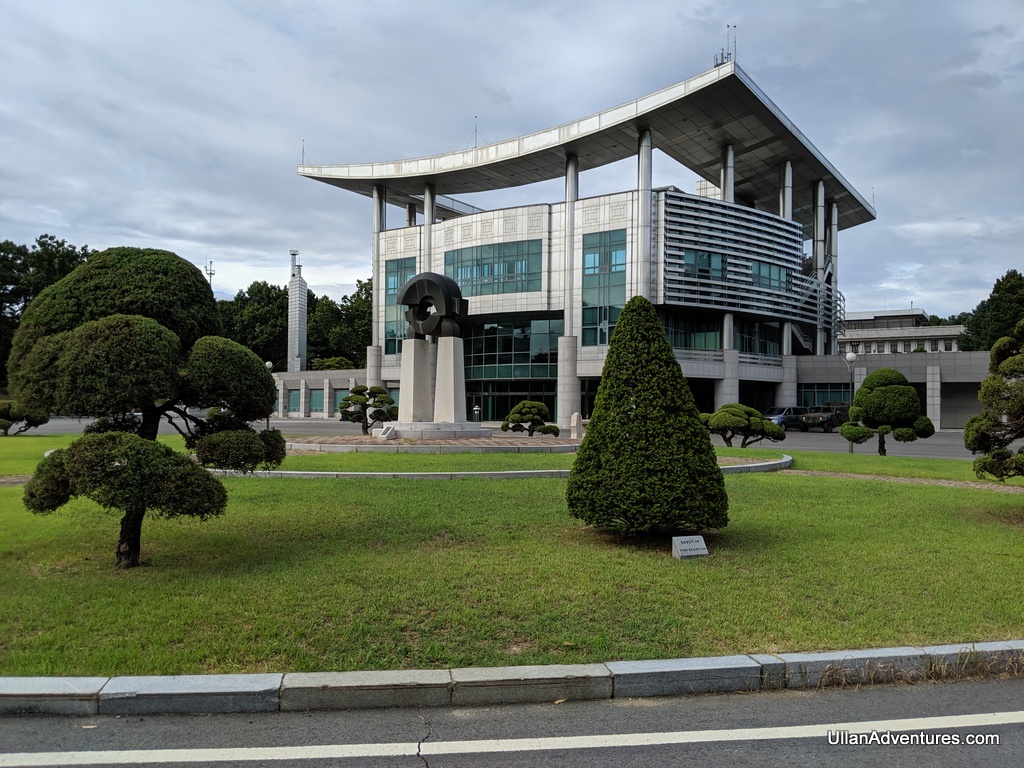 Once back at Camp Bonifas, we boarded our first motor coach to continue our tour.

The soldier that was keeping an eye on Beckett, gave him 2 military patches before we left.

Our final stop was at the Dorasan Station.  This is a train station which used to connect North Korea and South Korea.  The hope is that one day, this station will be used to connect them together again. 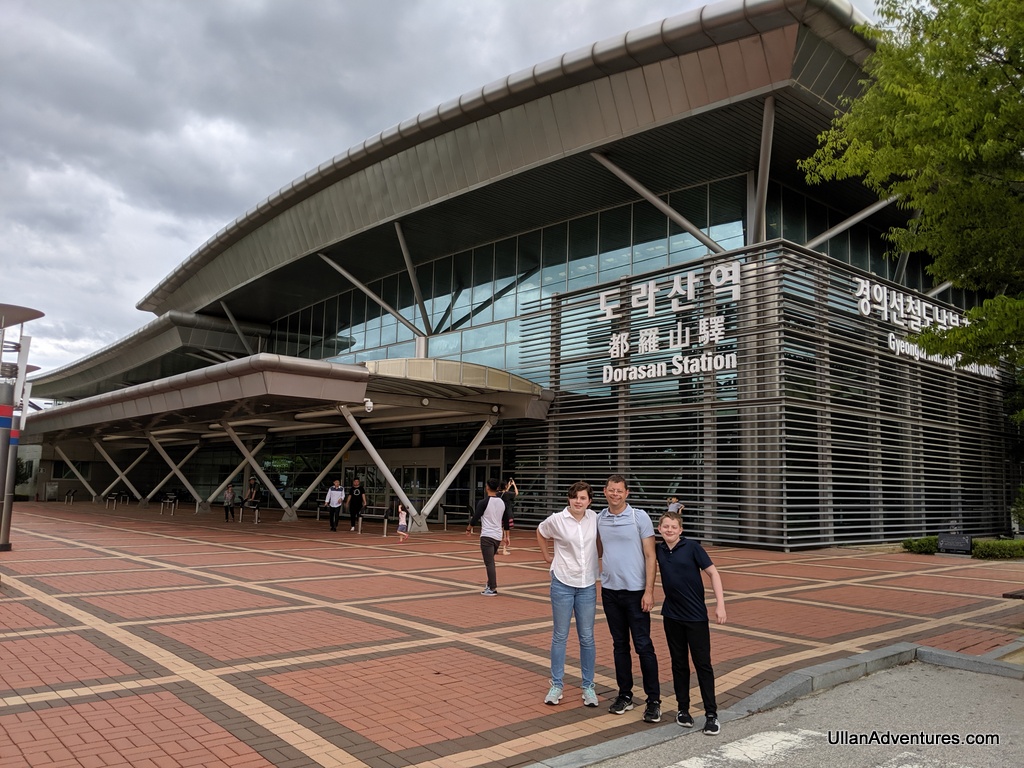 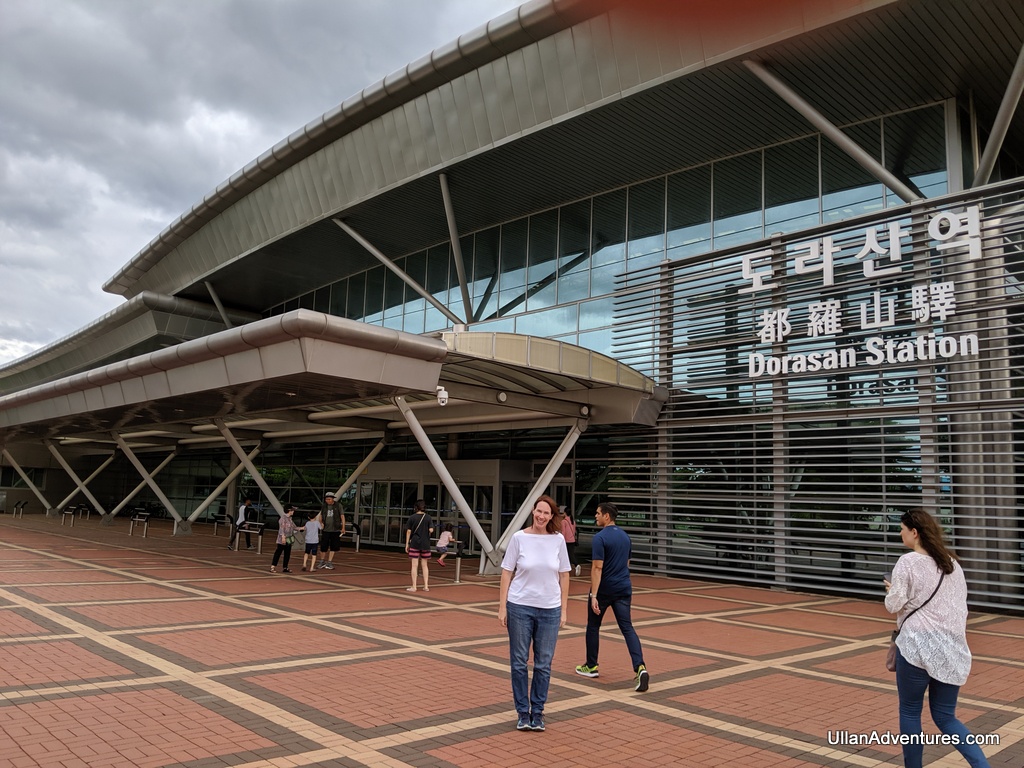 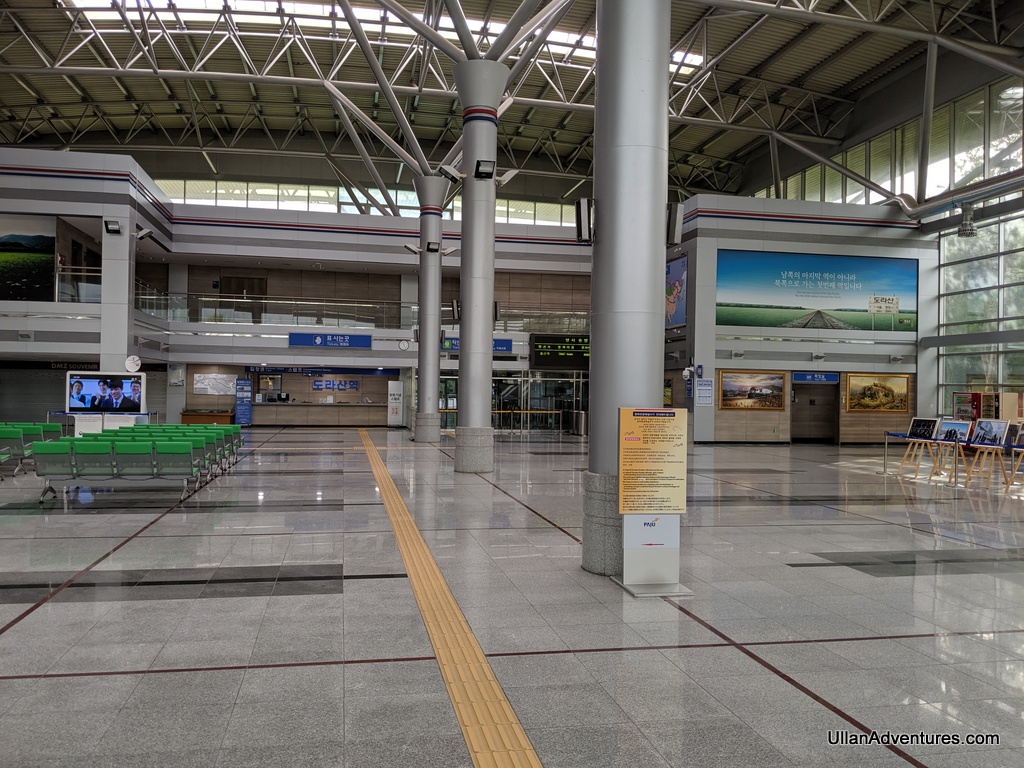 Waiting for a train that wasn’t coming yet

And sadly, this was our last stop, so we headed back to Seoul. 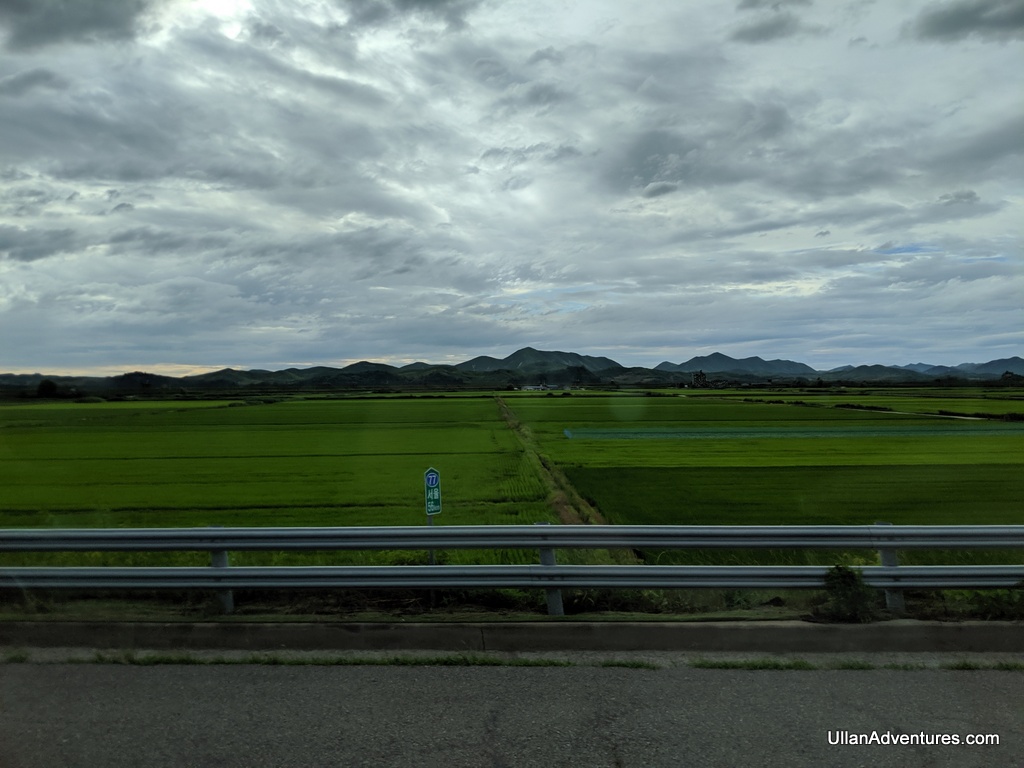 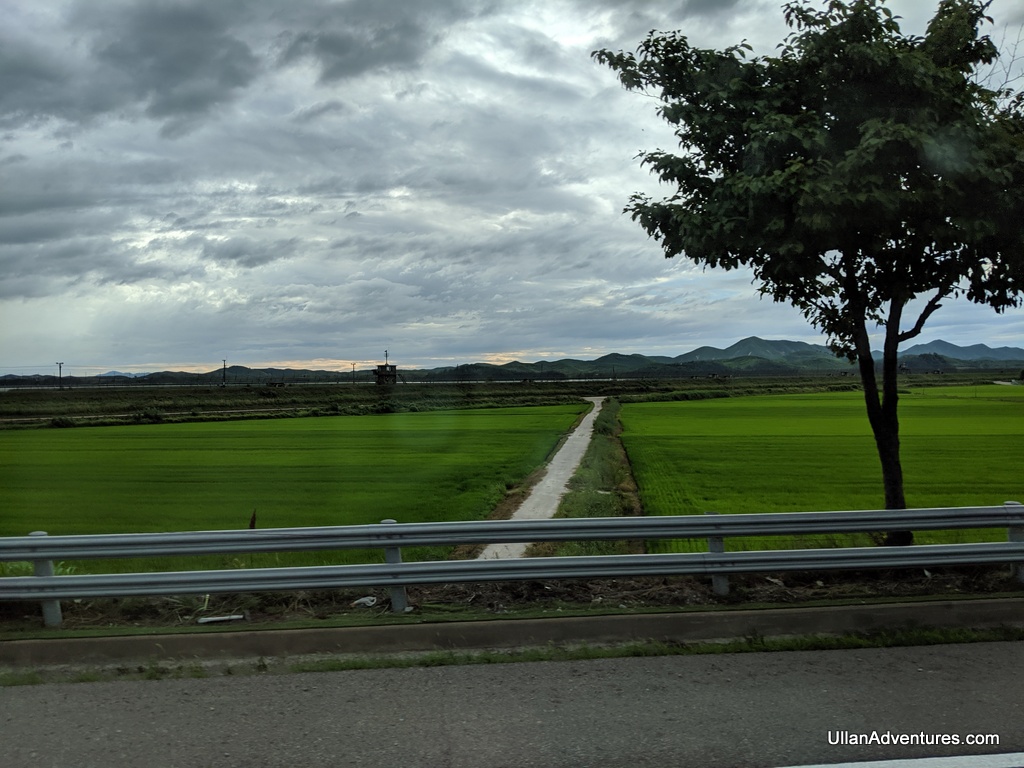 Overall, it was such a neat experience.  It wasn’t as scary as I expected, but that’s also probably because they removed all the soldiers with guns from both sides 6 months before our visit.  Still, I never felt unsafe or had an concerns once we got the border.

And as soon as Beckett got to cross into North Korea, he was so happy and relaxed.  He ended up being so glad that he went, and so proud of himself for pushing through his apprehension.