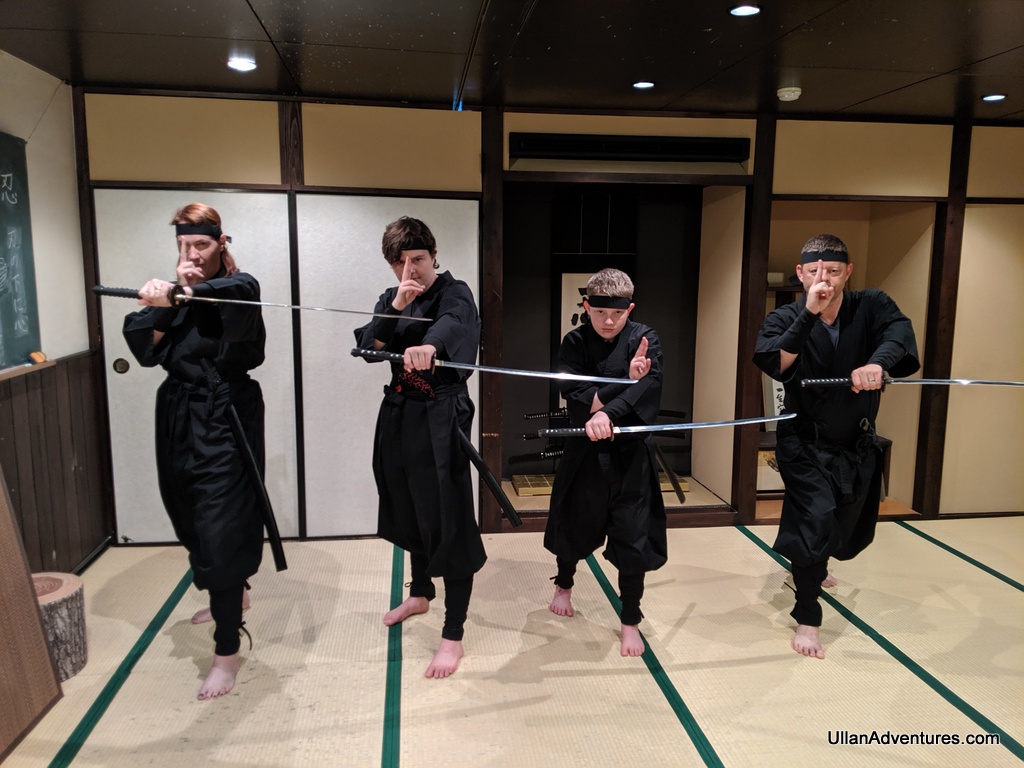 There was no way we were coming to Japan and not taking a ninja class.  Ninja stars?!?  Swords?!?  Cool outfits?!?  Yes, please!

We took a 1-hour lesson with the Ninja Dojo and Store, although it ran longer than an hour.  Luckily it was just the 4 of us at this lesson, so we got to really enjoy the experience as a family.

After getting suited up and getting some pictures, we first learned some Japanese and then the ninja training began. 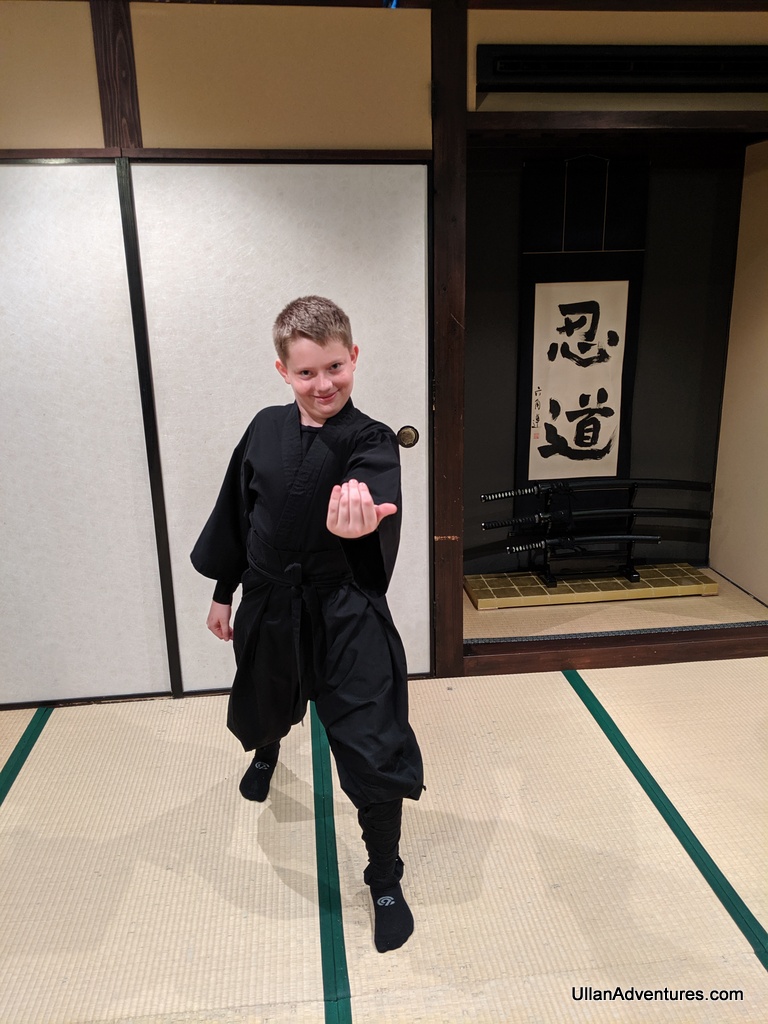 One of the first things we learned was how to walk like a ninja.  Ninjas primarily work in the dark so they not only have to be quiet, but know how to avoid obstacles.  This is done by pointing your toe and gently touching it to where you want to step.  If something is in your way, you’ll discover it before putting any body weight down and can then search for an alternative path.  Very sneaky. 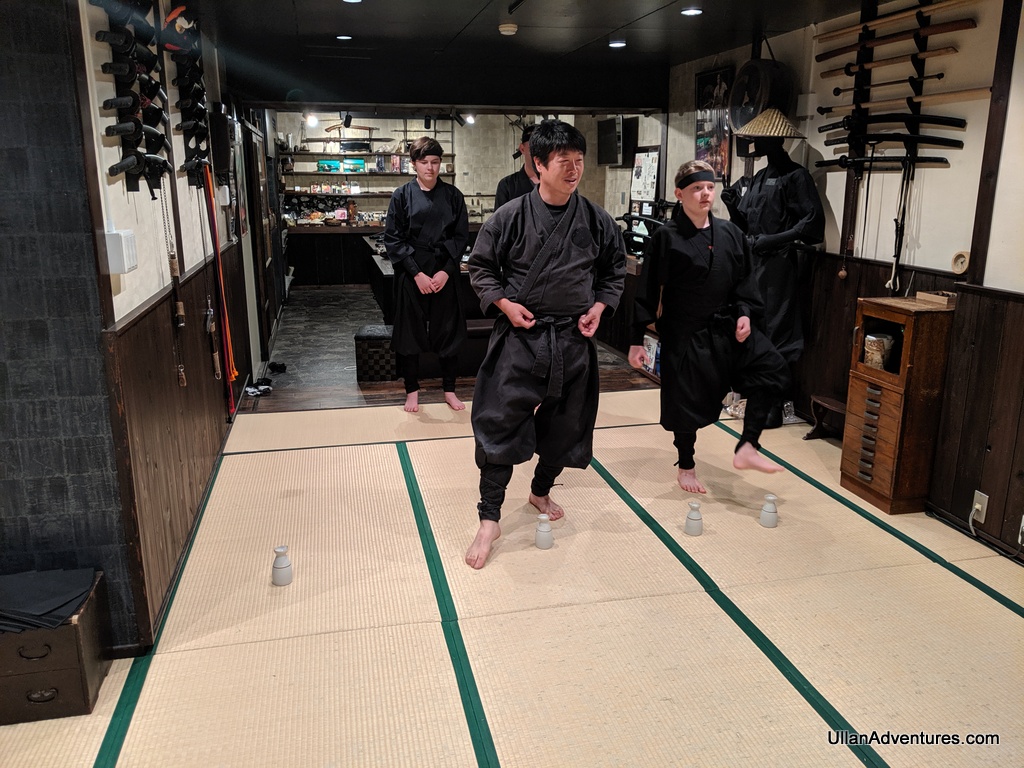 Then we learned how to enter a secret door and come out quietly.  Some of us were more graceful than others at this and we had a good time practicing. 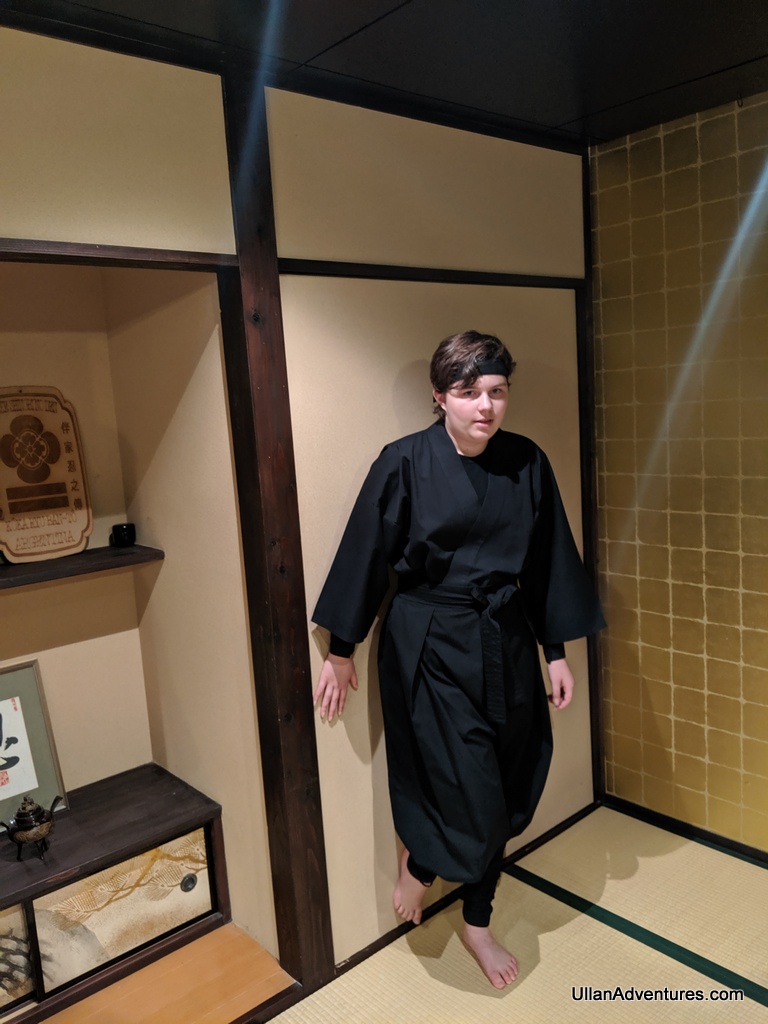 Mara about to disappear behind a hidden door

After learning a couple more things, it was time for the Ninja Swords!  We not only learned the difference between a Ninja sword and a Samurai sword, but also why it has a string on it.  We then learned how to properly pull it out of its sheath, how to wield it, and then how to re-sheath it when done. 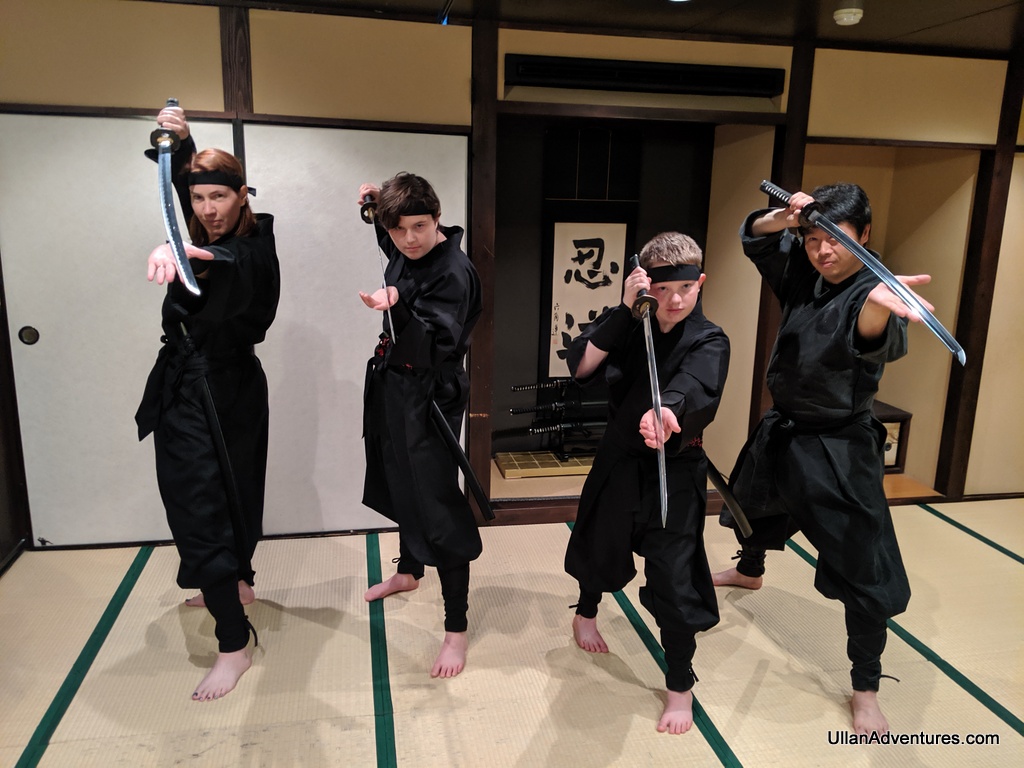 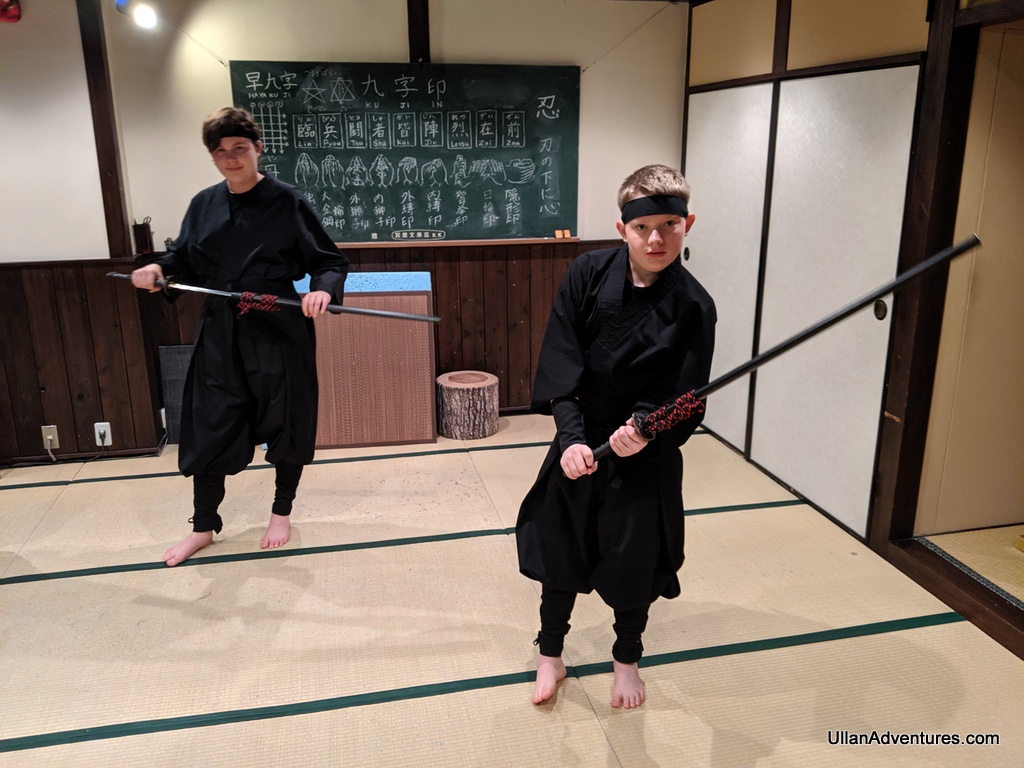 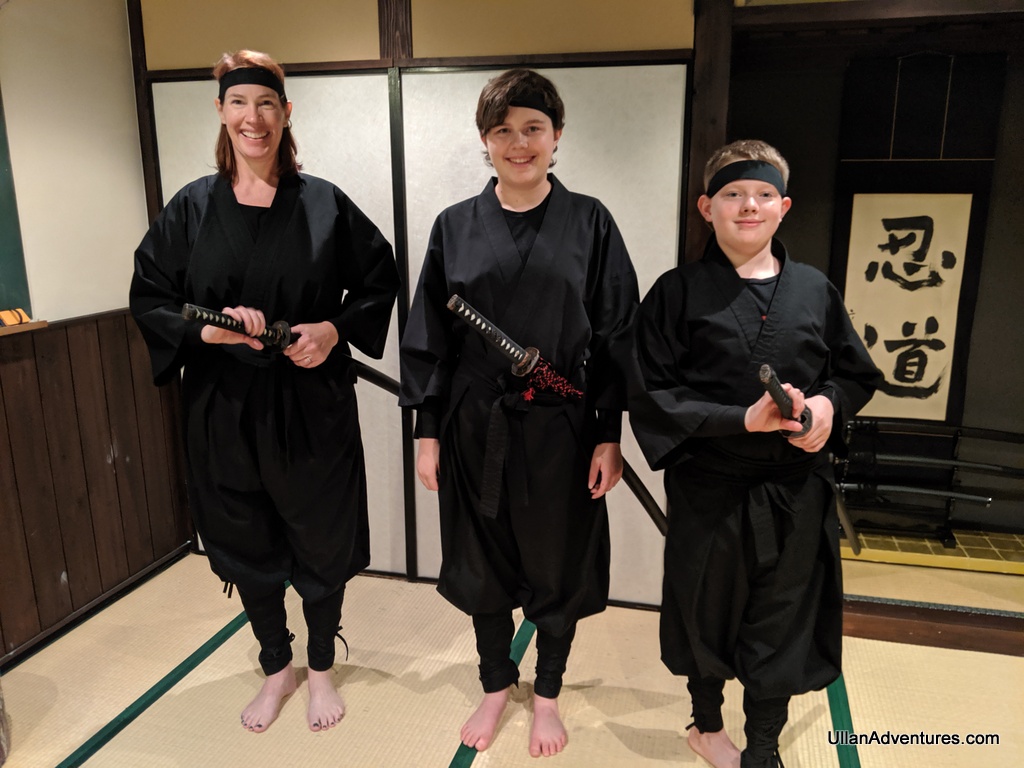 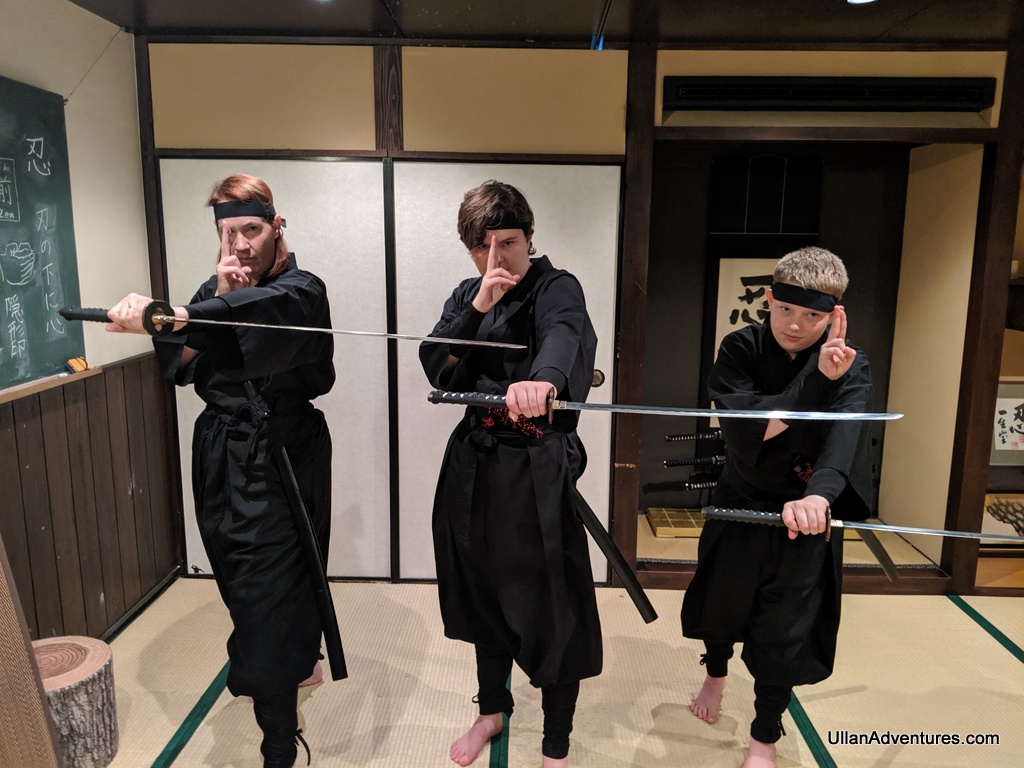 After a bunch of practicing, it was time to take on a bad guy.  First we did our ninja walk and once the bad guy was detected, we stabbed him then put our sword away.  We had a great time doing this part! 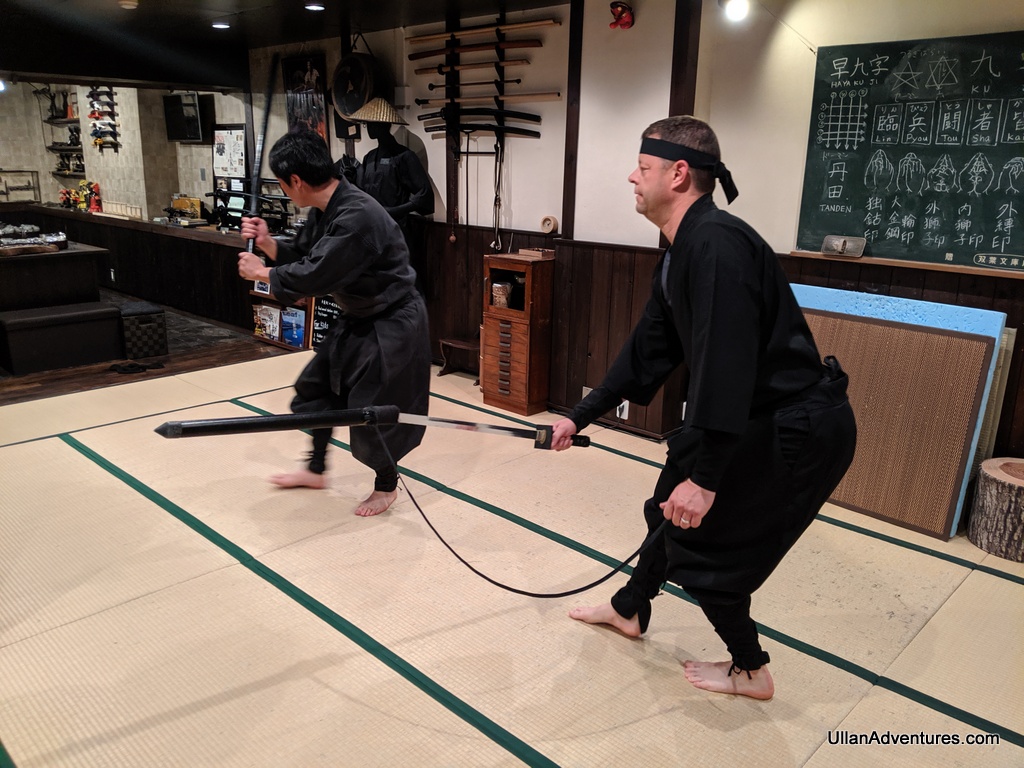 Chuck about to attack a “bad guy”

Next we got a rundown on different Ninja weapons and when they’d use them.  First up for us to learn was Ninja Stars (Shuriken)!  We all picked it up fairly quickly and (mostly) hit the target.  Chuck was a bit scary with how good he was at it. 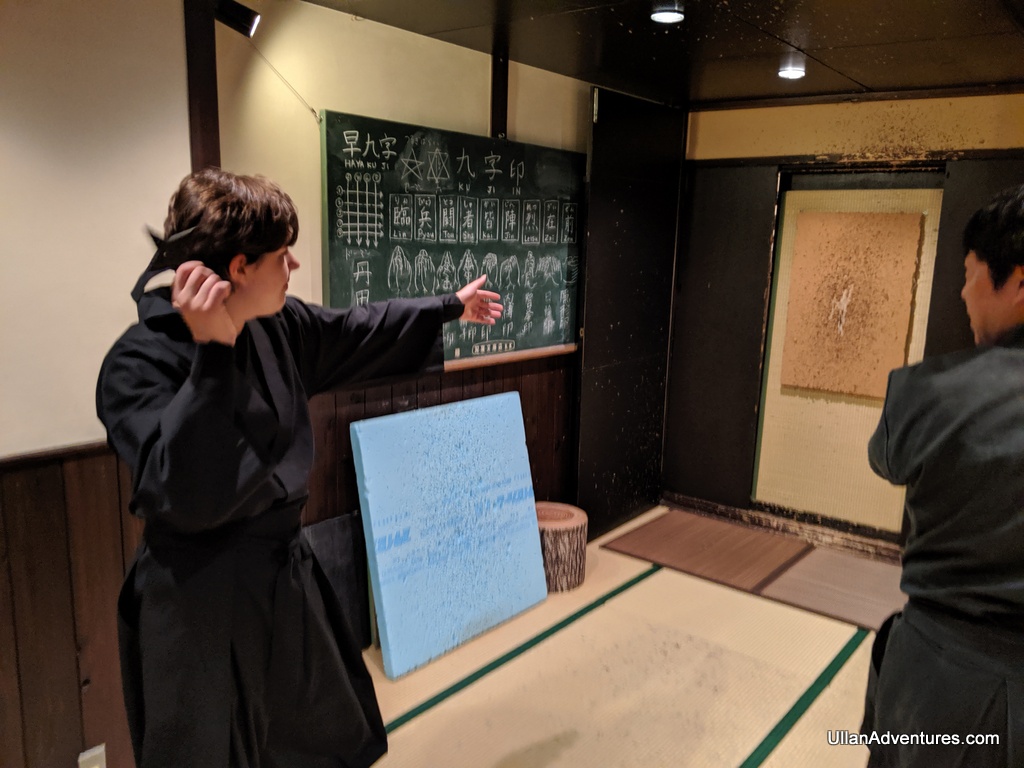 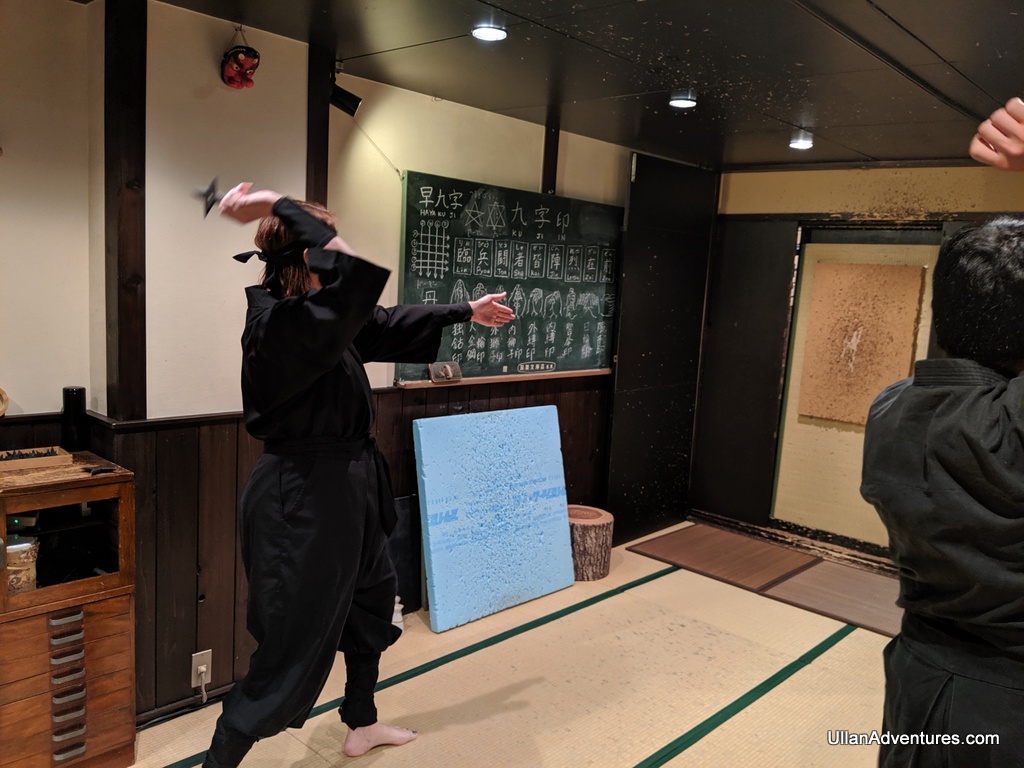 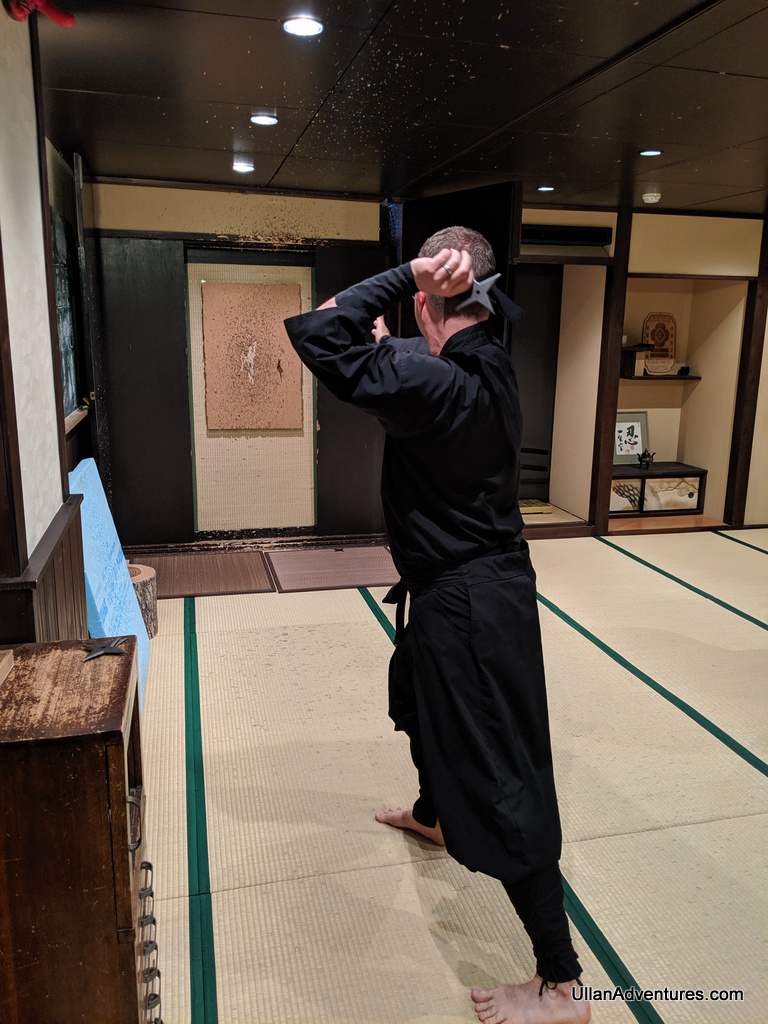 Next up was learning to throw chopsticks.  Yes, chopsticks.  Sometimes a ninja has to use whatever is available, so we saw how an innocent chopstick could be used as a weapon.  This was a little more hit or miss, however, I was quite good at it.  One of mine ended up embedded in the tatami mat though which was pretty funny. 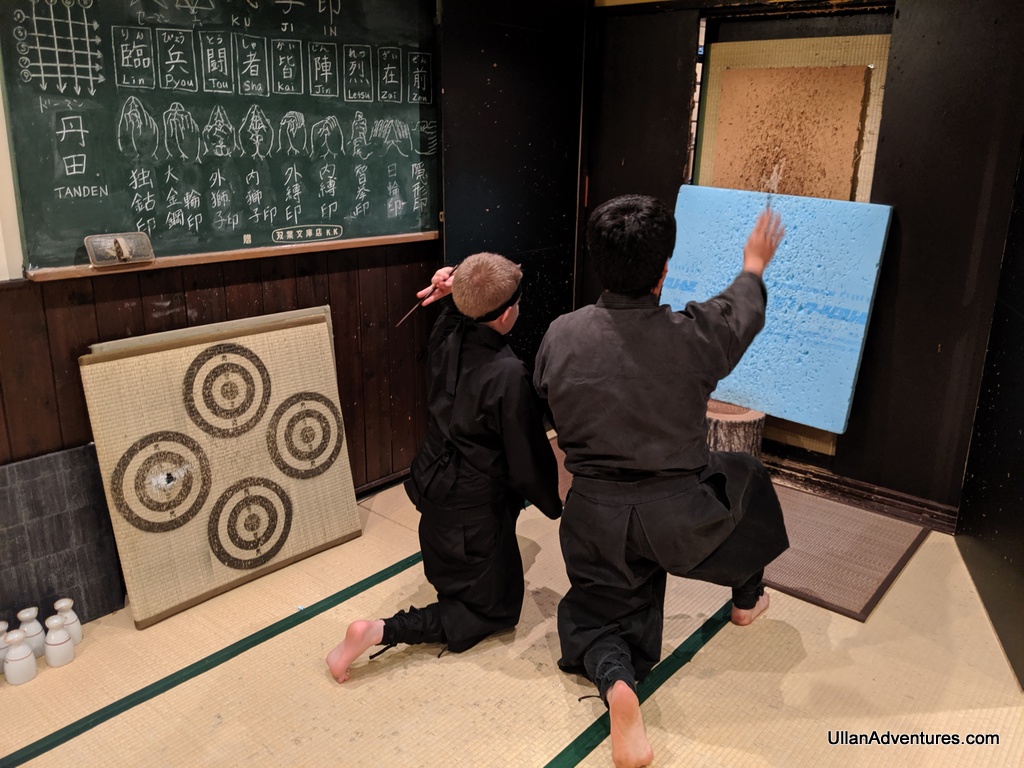 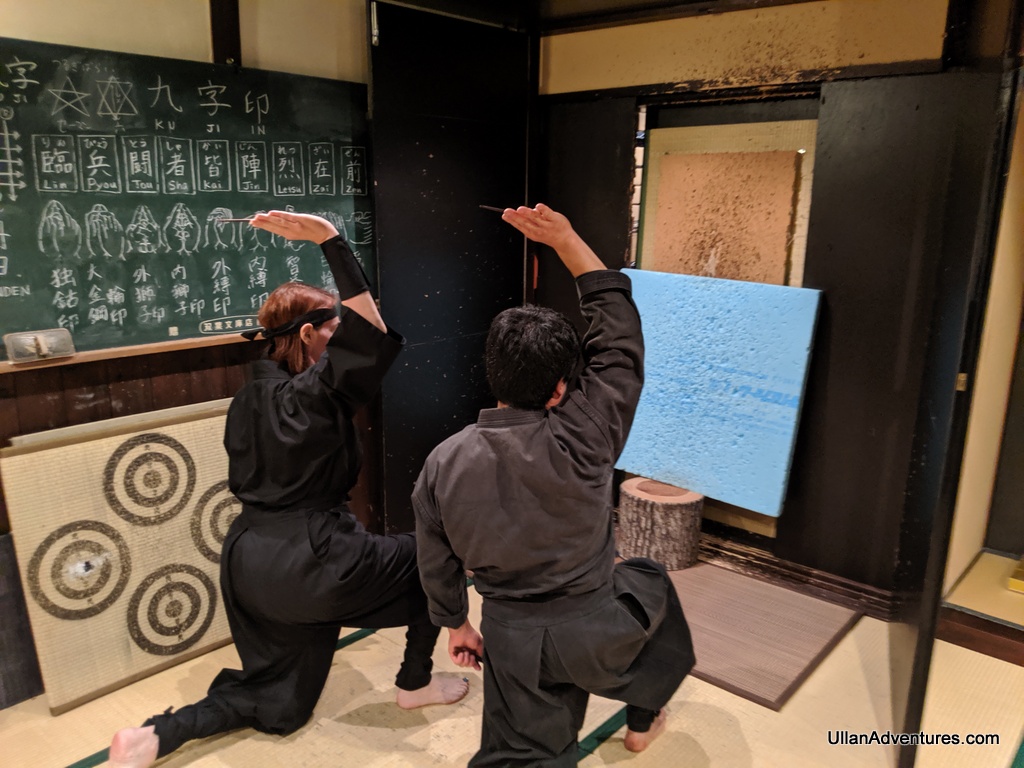 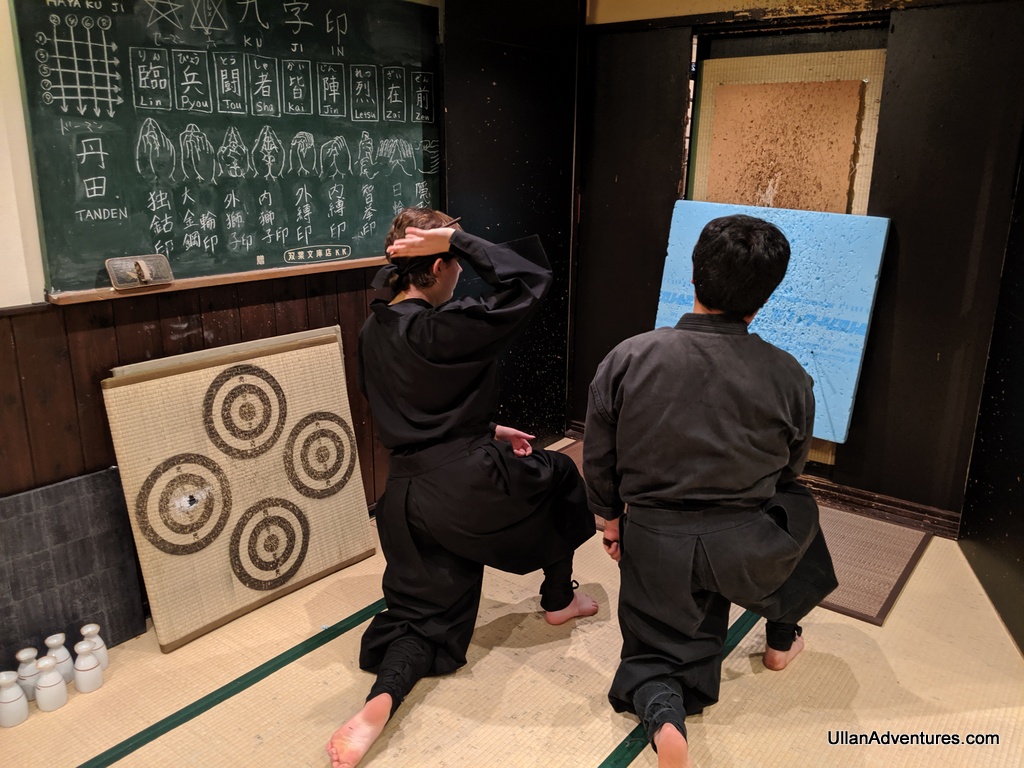 The last weapon was the blowgun.  Chuck and the kids did well at this, but I struggled to blow enough air since I was battling all my jaw issues and it had been so painful on the trip.  I still was able to do a couple, but then gave the rest of mine to the kids.  It was still fun though! 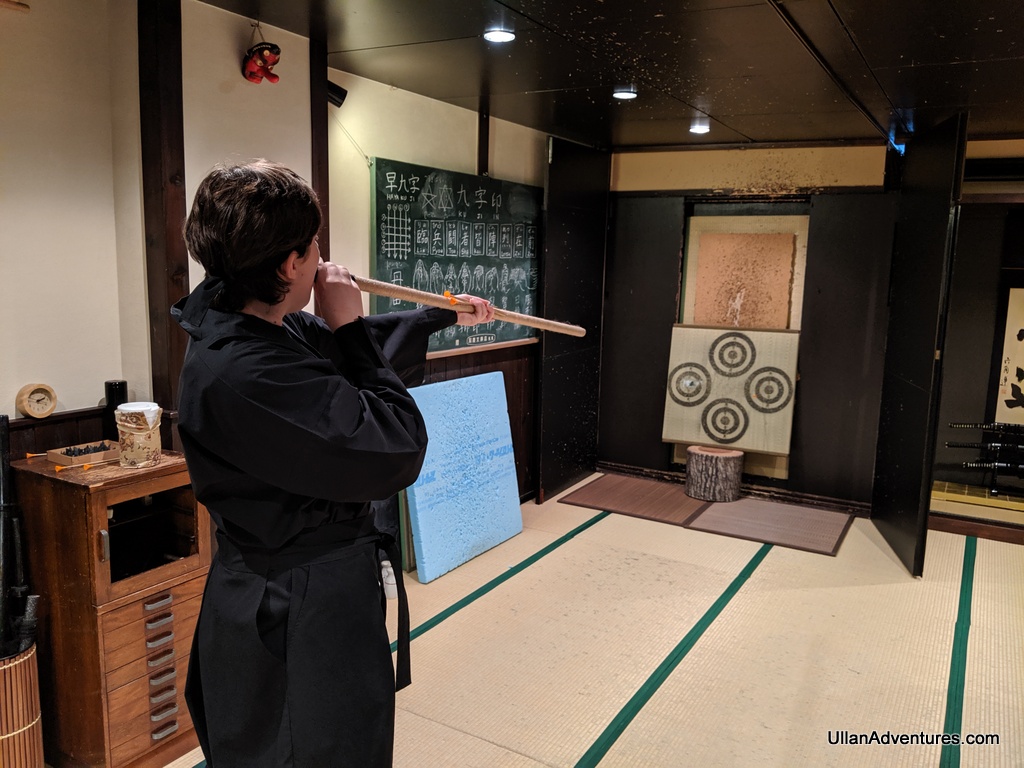 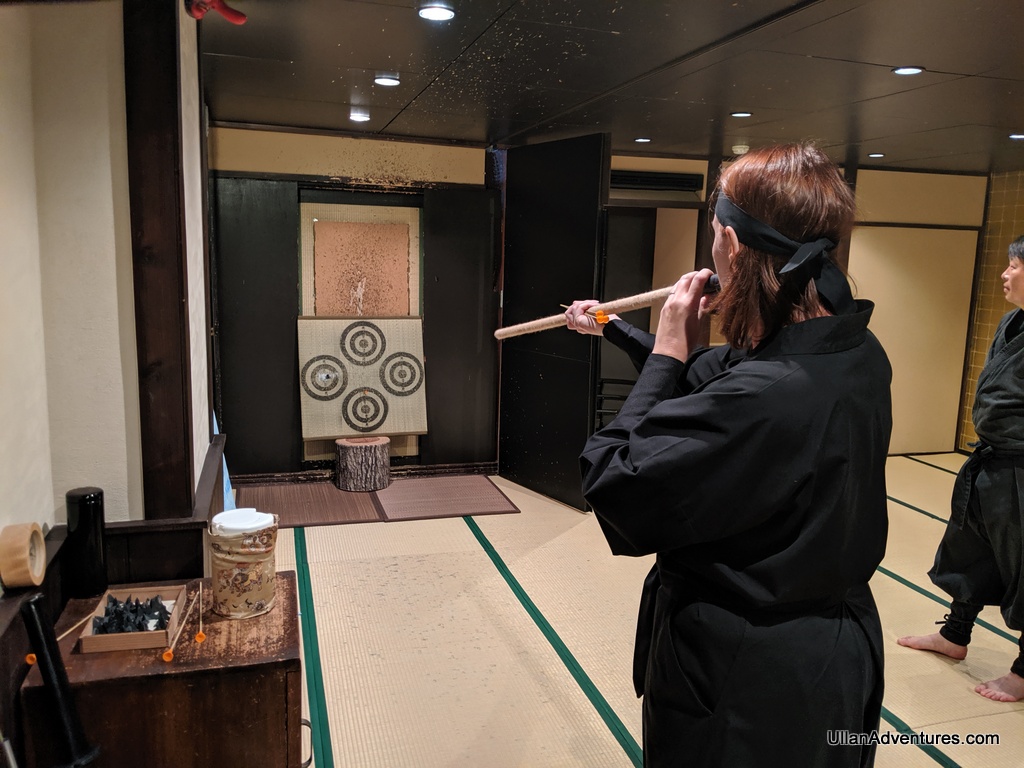 Sadly our lesson was over so we took some final pictures, took off our cool ninja clothes, did some shopping (a metal Shuriken for us, some rubber Shurikens for Beckett) and headed out. 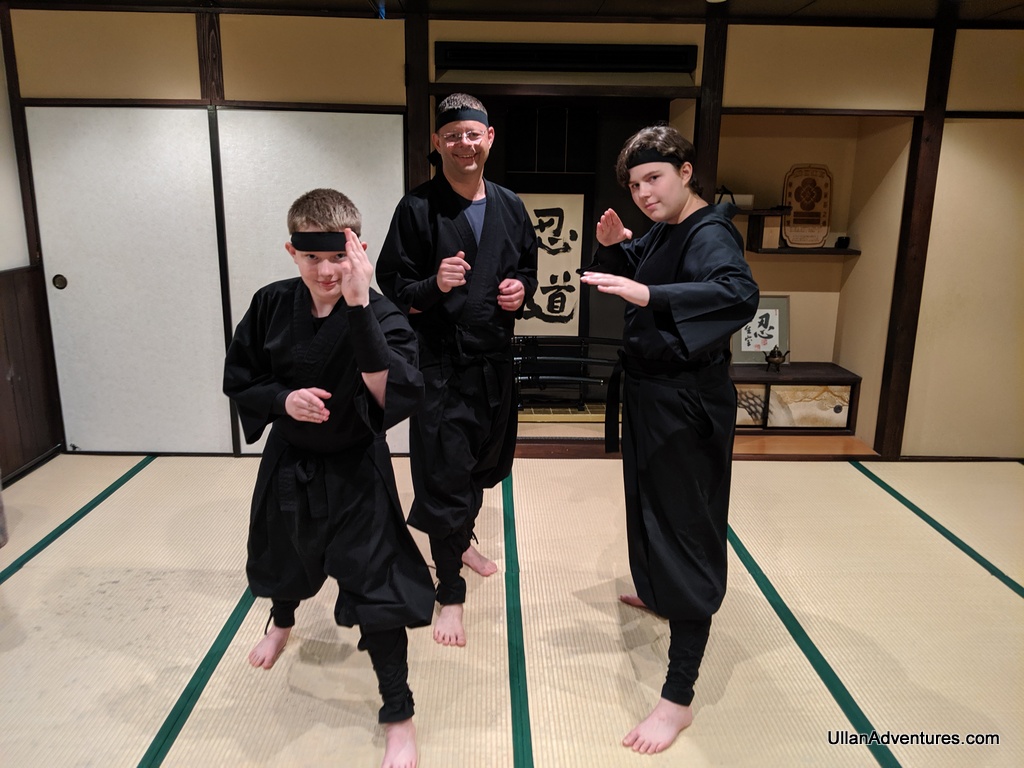 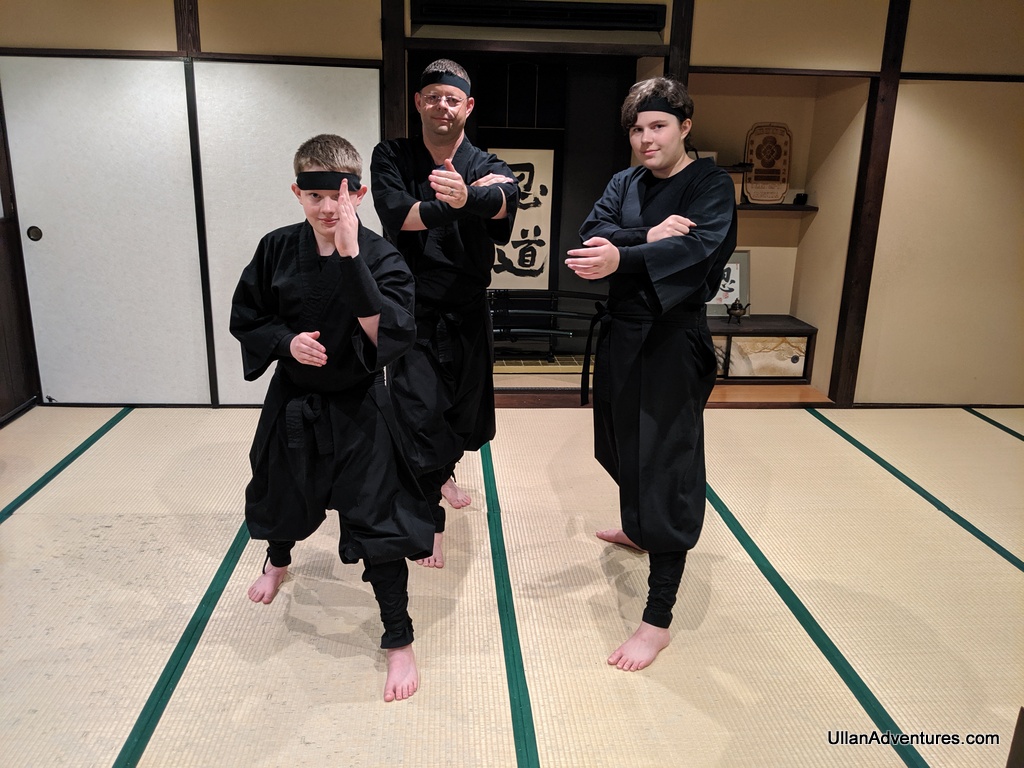 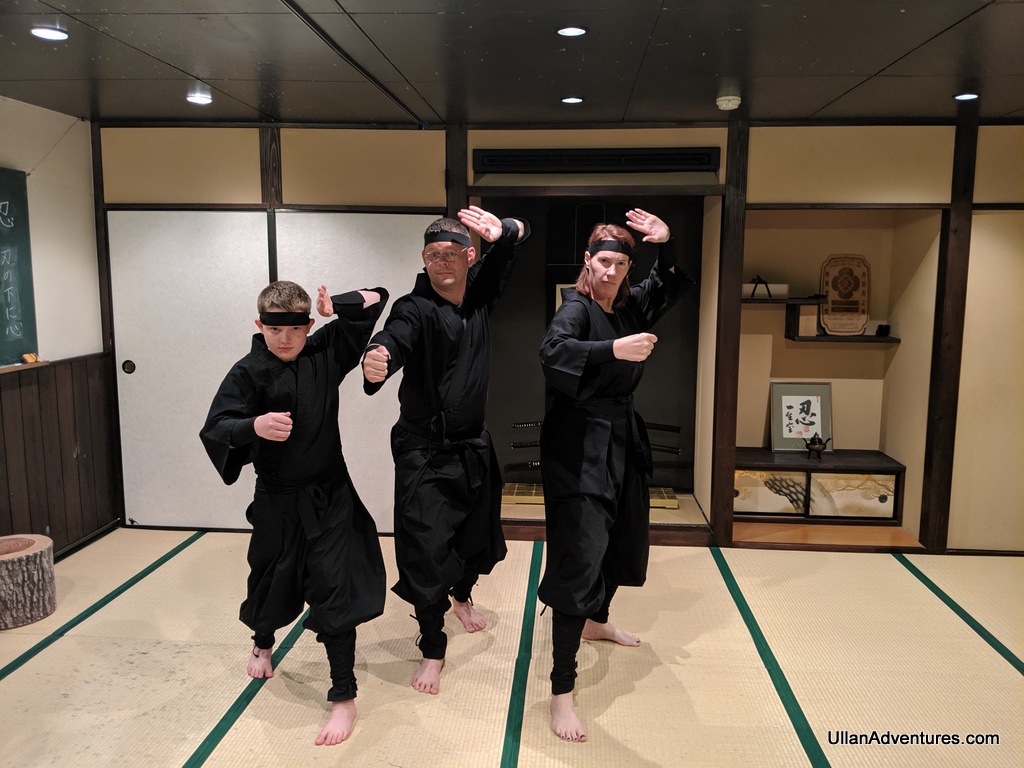 The ninja class was so much fun and one of the funnest activities we did on our entire trip.  We had a blast dressing up, weilding swords, throwing Shuriken, posing for pictures, and laughing as we messed up or did well.  It was definitely an experience I won’t forget.