We can now add paragliding to the list of activities we didn’t know we wanted to do until presented with the opportunity.  Turns out that where we’re staying in Turkey (Fethiye/Calis Beach) is about a half hour away from Ölüdeniz, which is famous for both its turquoise blue waters and fantastic paragliding.

We weren’t 100% sure if we’d do it, but once we got to Ölüdeniz and saw everyone coming down, we knew we had to do it.  Since we couldn’t leave the kids on their own, only Kirsten went on the first day.

She had a great time, which made me want to go, and then Beckett REALLY started begging us to go.  He’s been relentless for the past two weeks, and we finally gave in and said yes.  So a couple days ago, we all went over there again so Beckett and I could get our turn.

All the companies  have offices down by the beach and you just show up and sign up with whomever you want.  Most of them have flights 4 or 5 times a day.  Then all the people doing it will hop into a van with their pilots and take a 30 minute drive up Babadağ mountain, the top of which is about 6,500 feet. 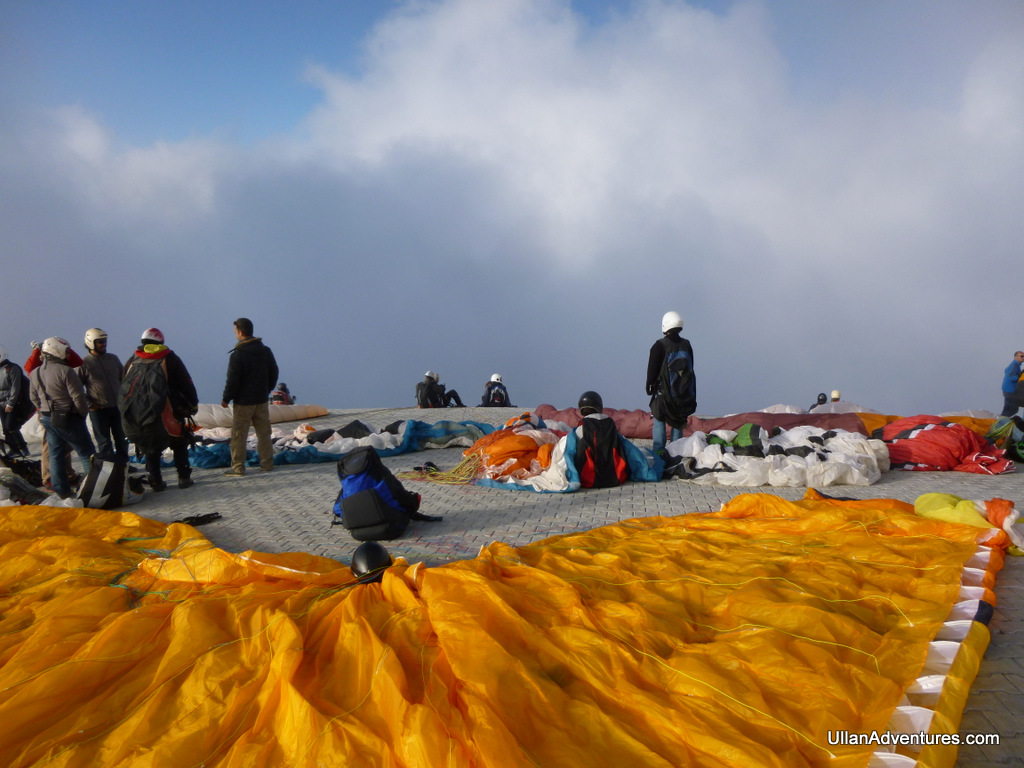 They have 3 launch areas at the top, and the winds dictate which one you use.  It’s basically a big slope filled with paver stones.  You’re not actually jumping off a cliff, but instead just catch air and get lifted off the slope. 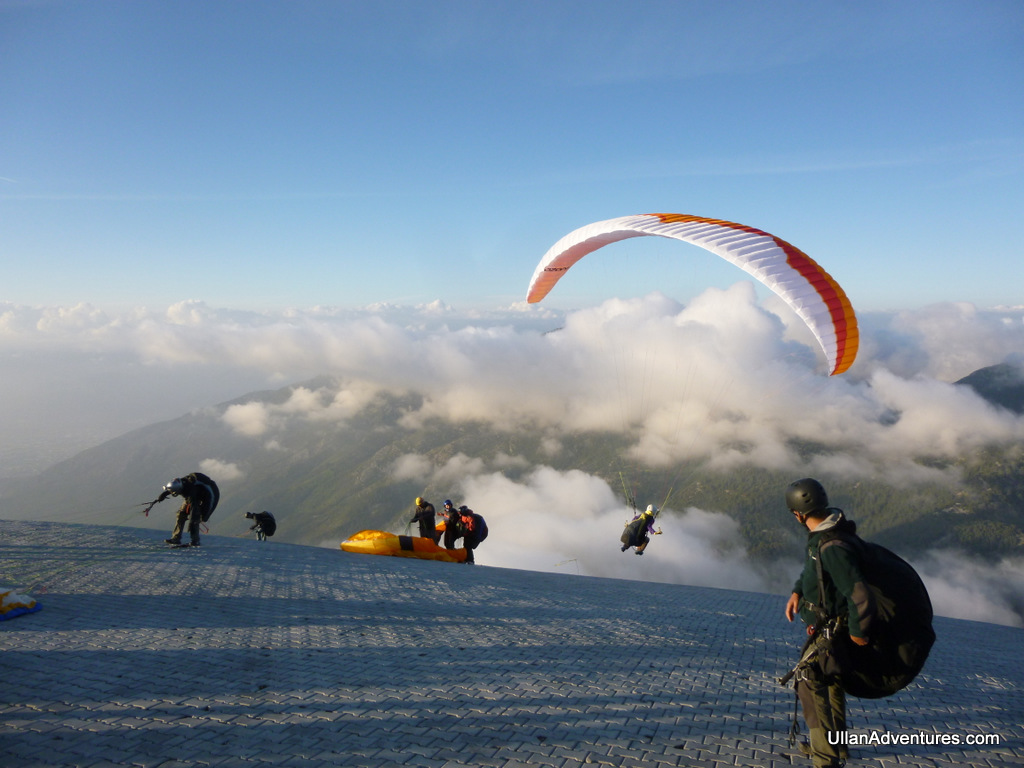 We continue to be surprised how fearless Beckett is in certain situations, such as with the zipline, and now the paragliding.  It’s kind of odd, because he gets freaked out by other things, such as strange dogs, even when they’re not hassling him.  The drive up made him a little nervous due to the steep hillside, but once we got to the top it was all systems go! 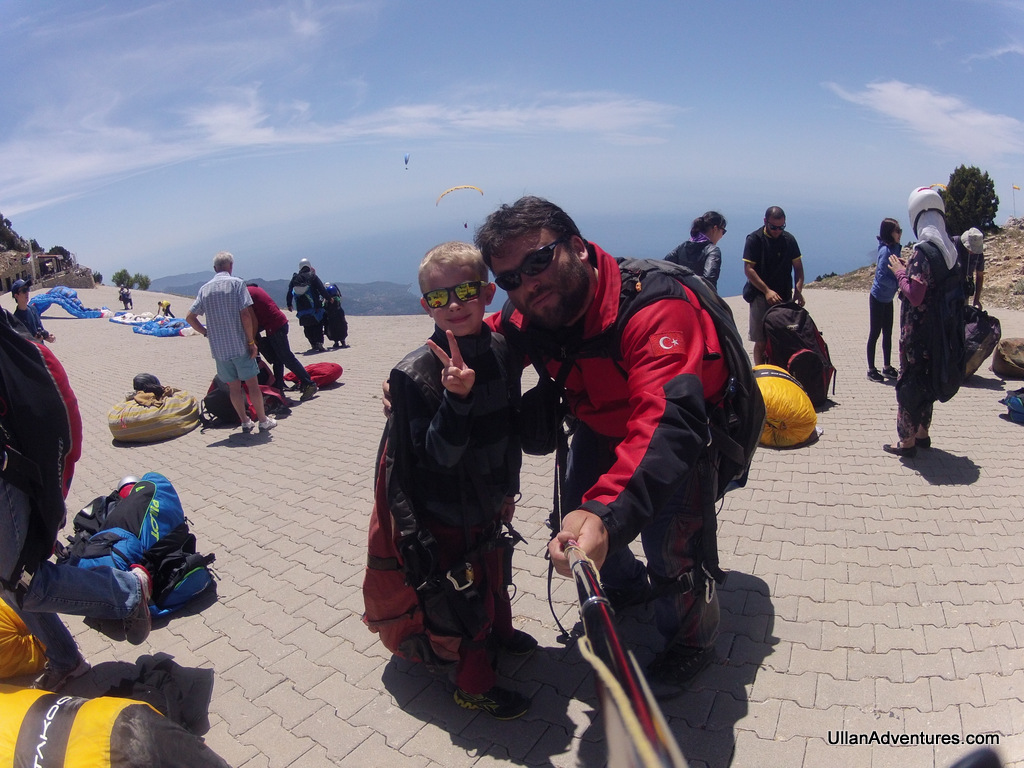 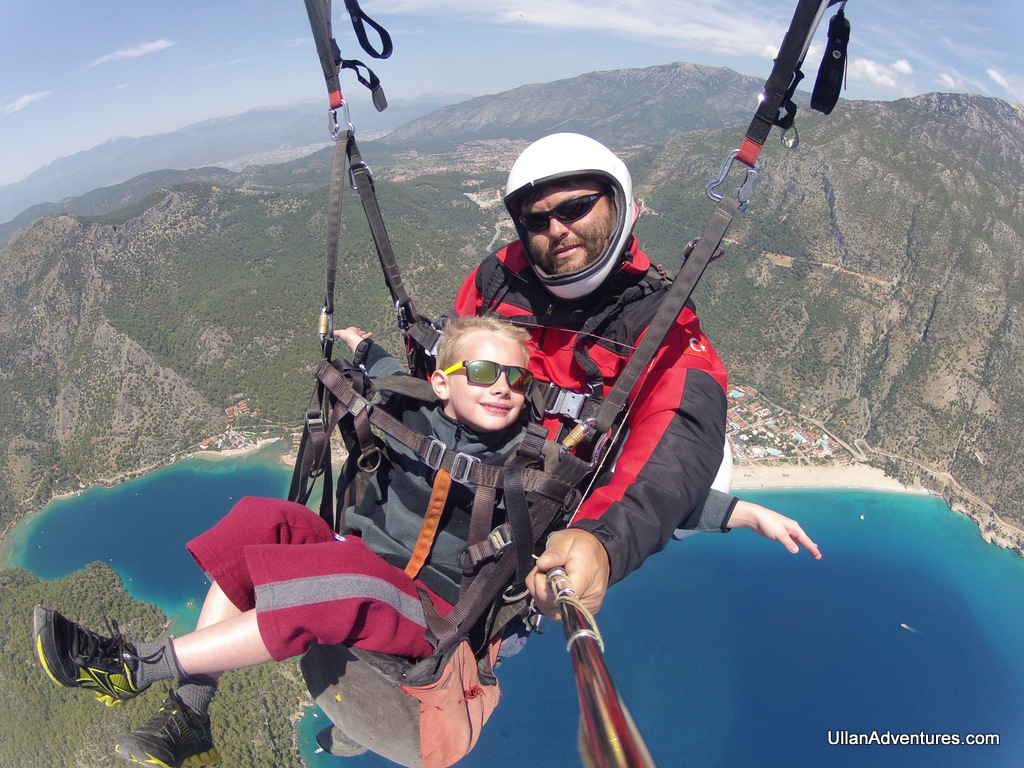 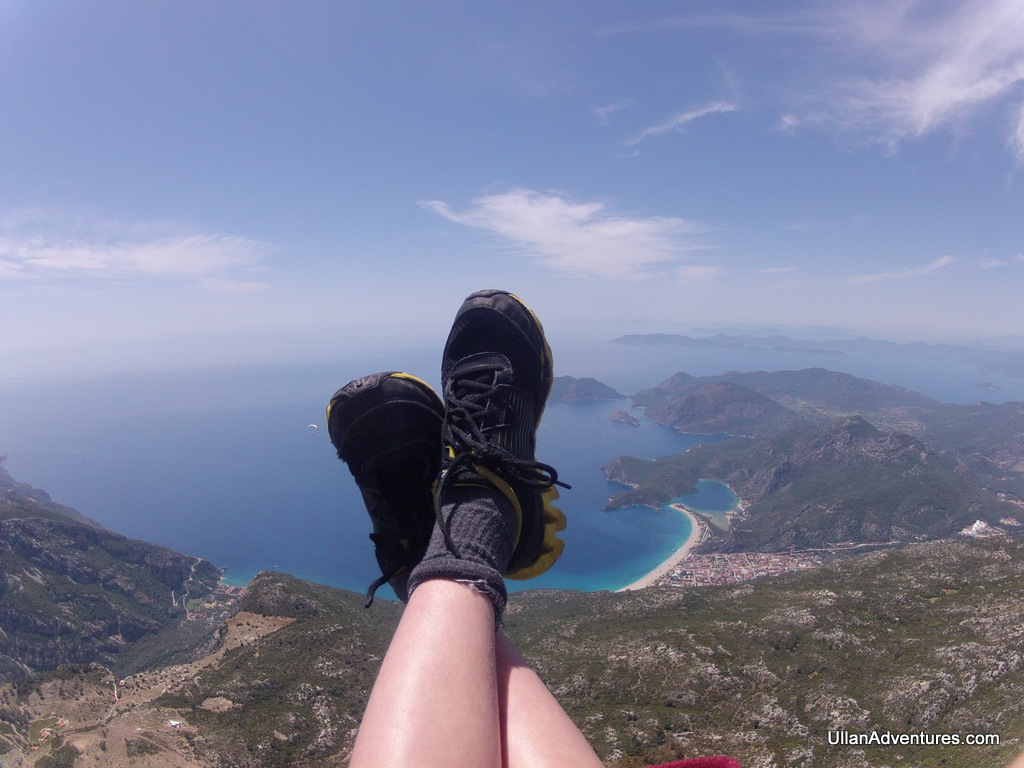 If the weather is good, you’re out of the van and into the air in about 3 minutes.

Unfortunately, Kirsten’s flight got delayed by clouds, so she was up there for 3 hours!  Right before sunset the clouds broke just long enough for her to take off. 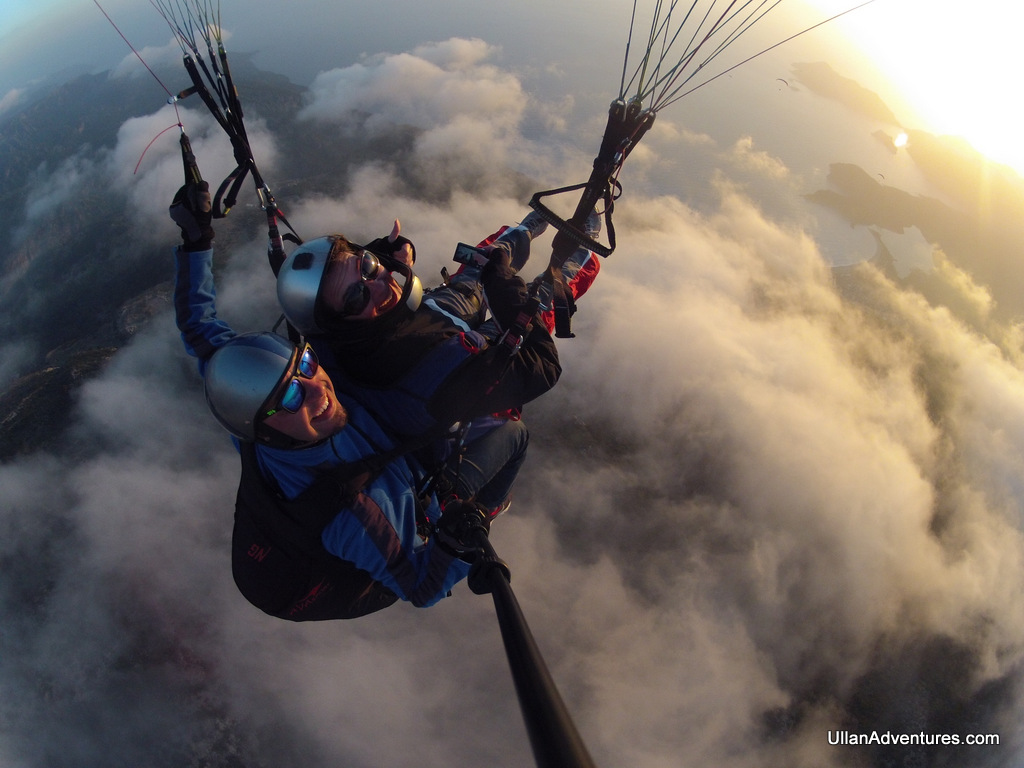 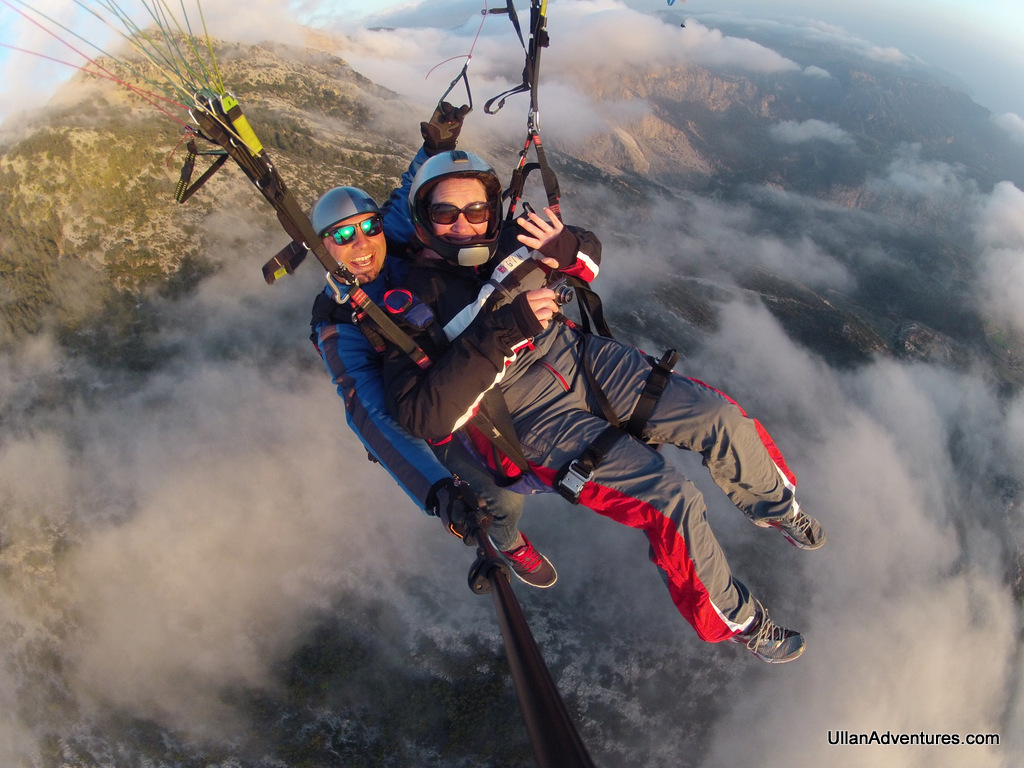 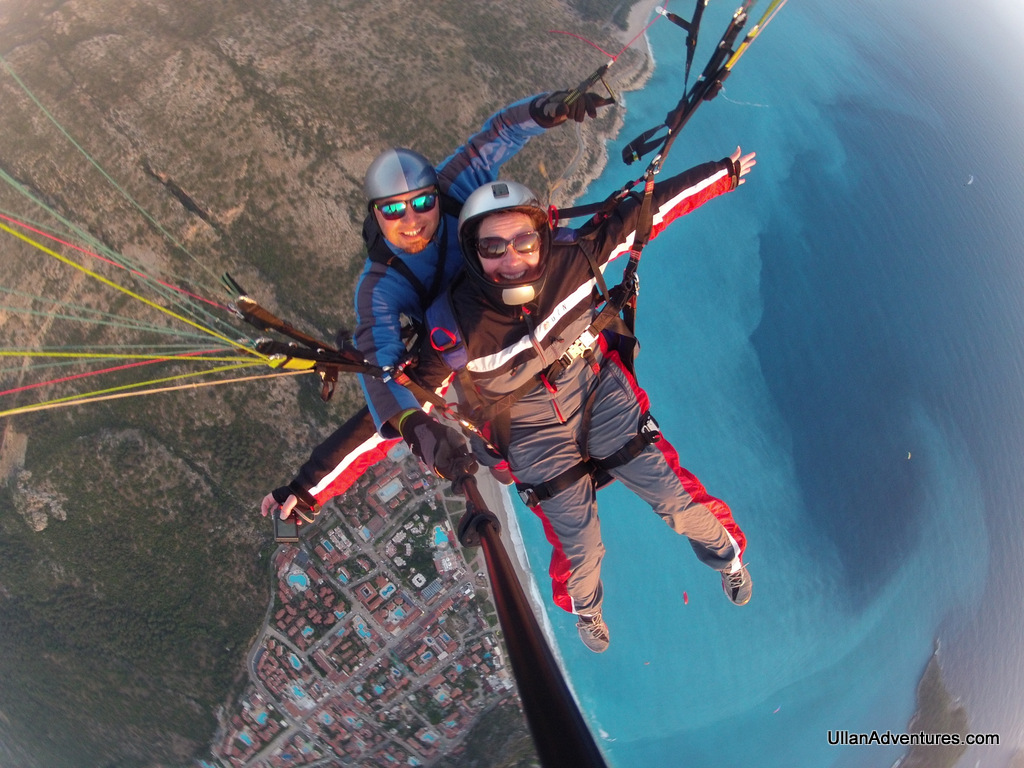 And here was Kirsten’s reward for the long delay – a beautiful sunset from the sky!

Finally, just one shot from my flight.   I didn’t pay for pictures, so just did a selfie while hoping not to drop my camera. 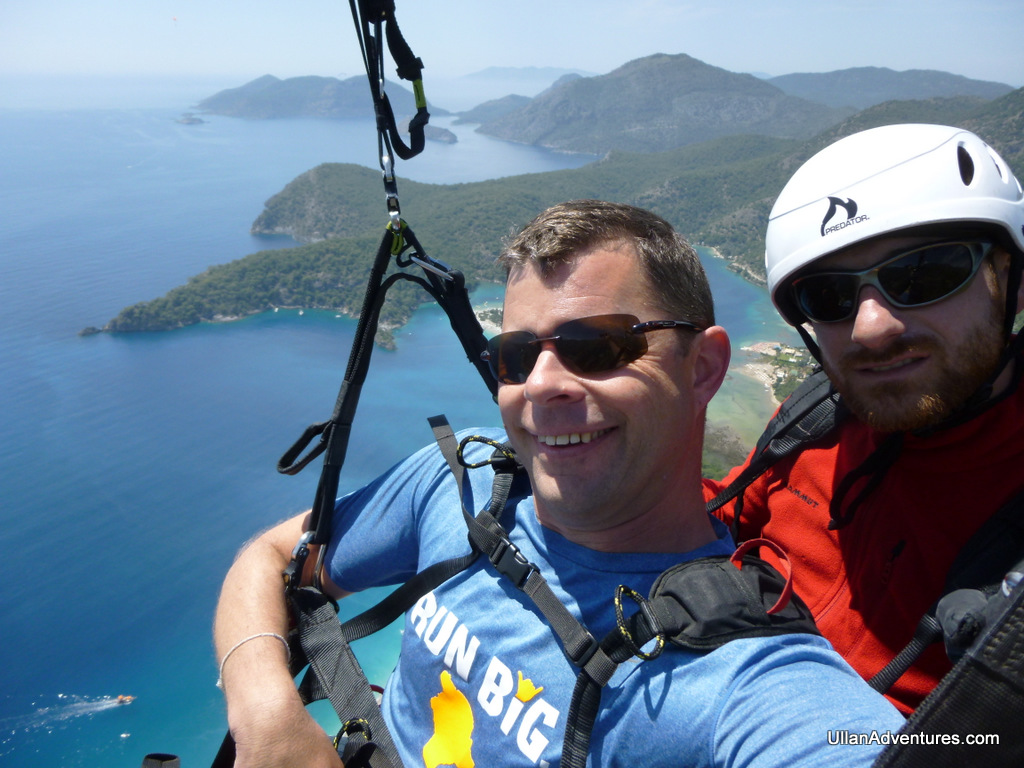 OK, all the photos of us aside, the views up there were amazing.  The ride is so smooth and gentle that you  just enjoy the feeling of soaring like a bird. 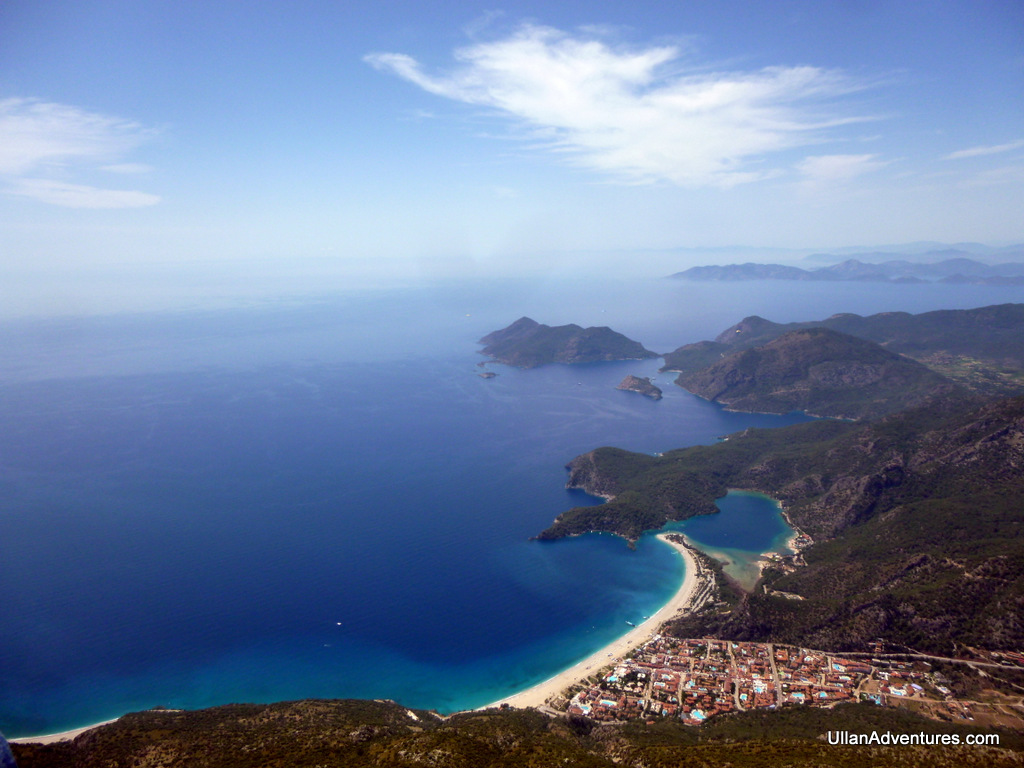 Ölüdeniz is the little town in the foreground. 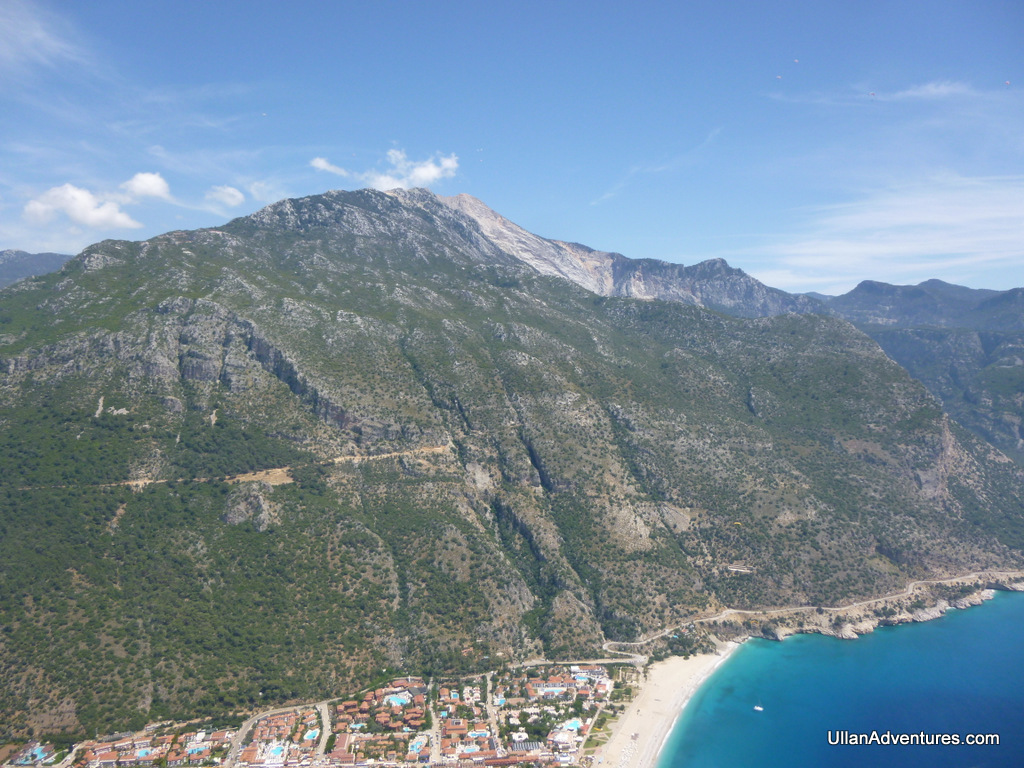 This is the mountain we launch from. 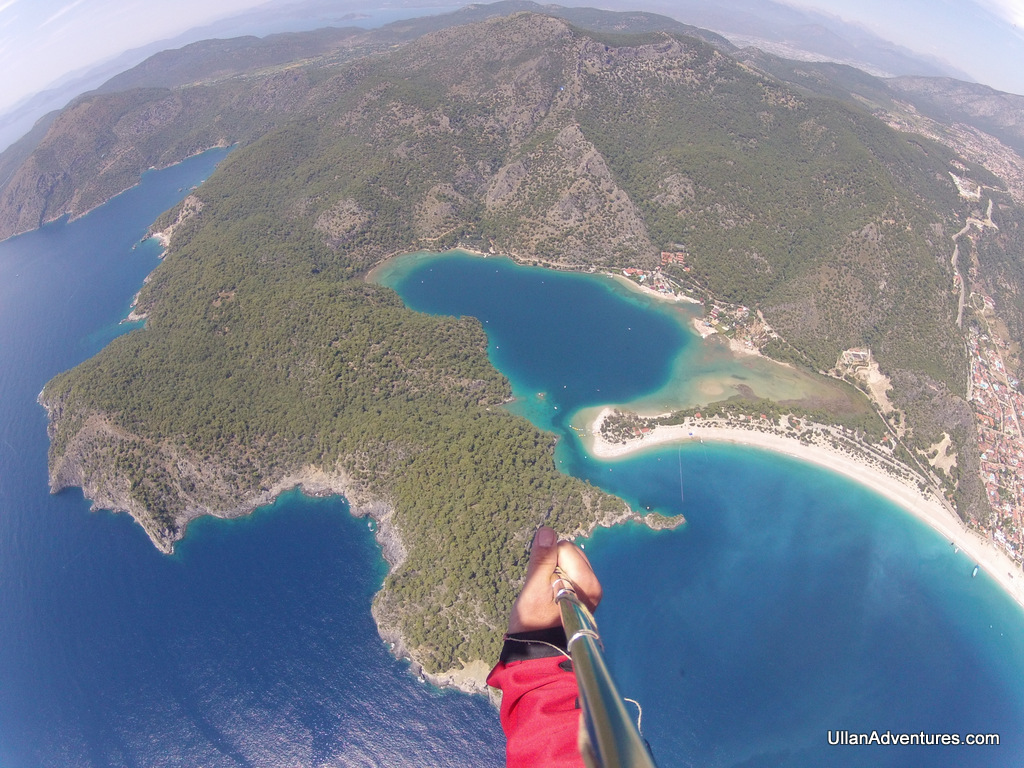 Even if you don’t go paragliding, the views of everyone landing are really cool, too. 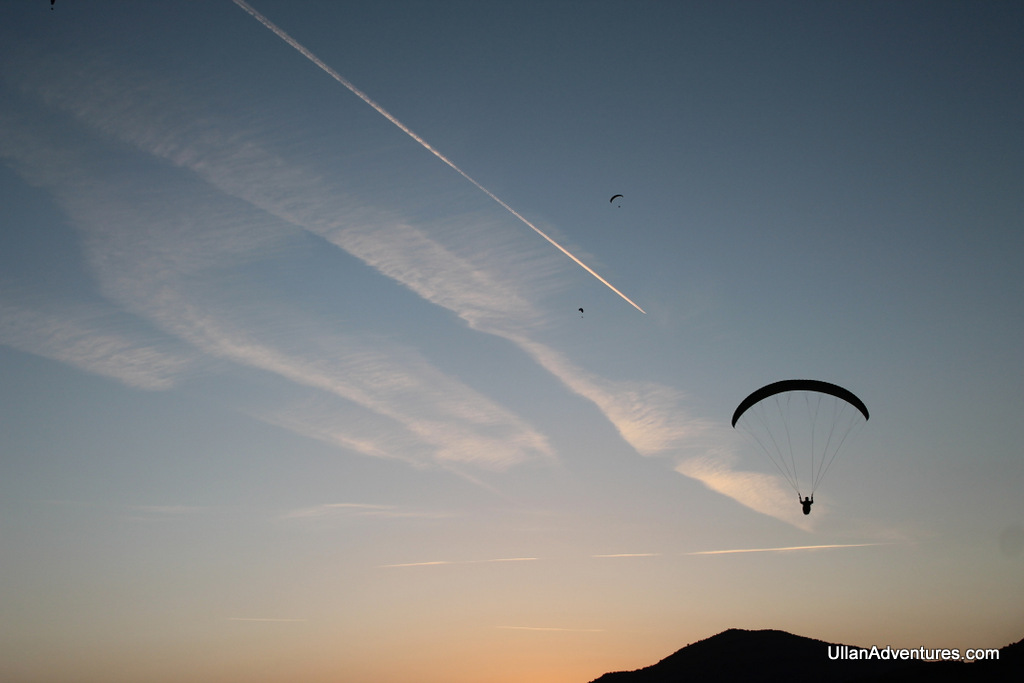 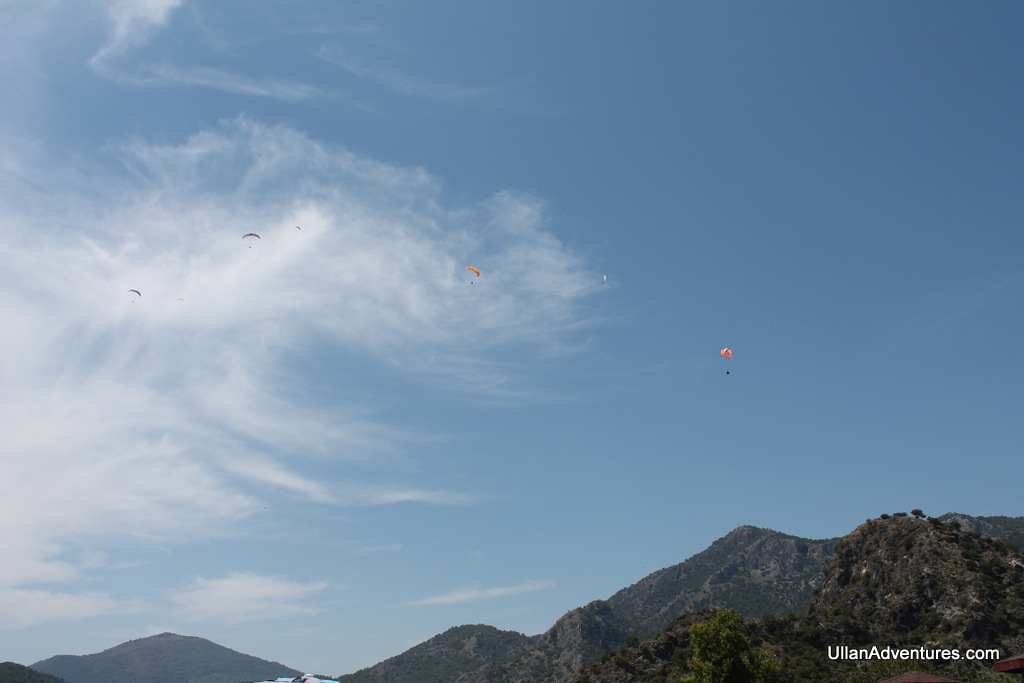 At times, you can see a couple dozen paragliders in the air.

All good things must come to an end, but landings are part of the fun.  There’s  a little strip of grass along the beach where all the gliders come in.  Our company had the flights go between two buildings to land close to their shop. 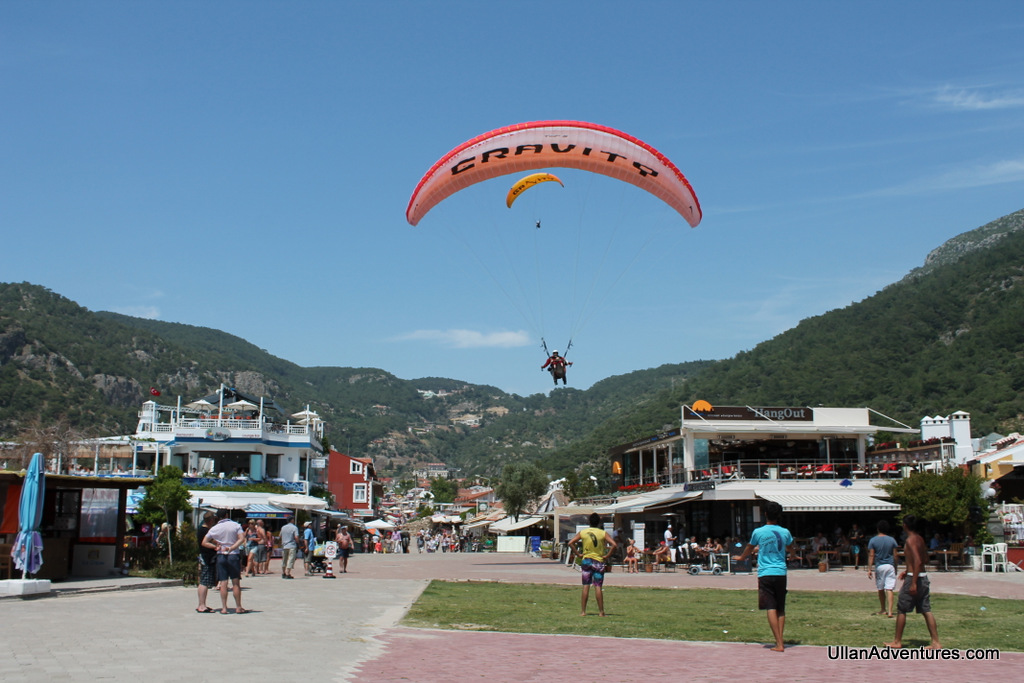 We’d recommend this to almost anyone.  It’s easy to be a bit nervous about doing it, but once in the air, all worries are forgotten.  The views are incredible and all three of us agree that it’s one of the coolest things we’ve ever done.

The cost here runs from 150 to 220 TL (about $70 to $105 US), which includes transportation, admission to the mountain, and your ride.  Prices are probably higher in peak season.  Kirsten used ReAction and Beckett and I used Gravity, which was a bit cheaper.

Photos and videos are extra, and they generally will end up costing you $30 to $50.  Yes, it’s a lot, but the photos are an incredible souvenir.

We didn’t make any reservations, and that was ok for May.  In Summer, you’d probably want to, especially if you have a large group.