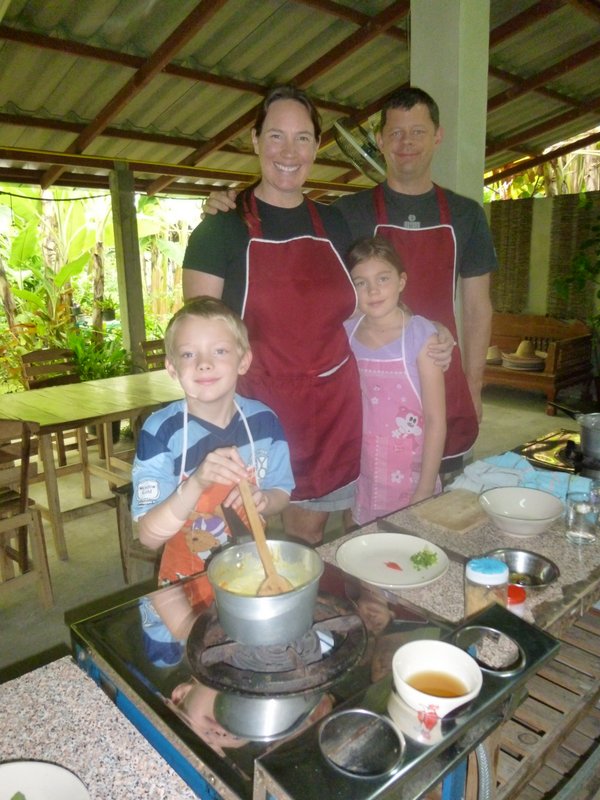 One of the bloggers I read took her kids to a cooking class with Sammy’s Organic Thai Cooking School while they were visiting Chiang Mai.  Her kids are even younger than mine yet they were able to help in the kitchen some and it seemed like such a fun and educational day.

My kids LOVE to cook so I thought this would be super fun for all of us and since its at an organic farm, it would be educational to boot.  However upon telling the kids I received one “meh” and one “I don’t want to go”.  Sigh.  I was so upset and almost canceled.  Even the morning of Beckett didn’t want to go and was being less than cooperative.

That all started to change as the class started.

We were picked up at Thae Pae Gate in the city since we live in the suburbs and then were taken to a local Thai market.  Sammy explained the different types of rice and where they came from and then we were shown how to extract coconut milk from coconuts. 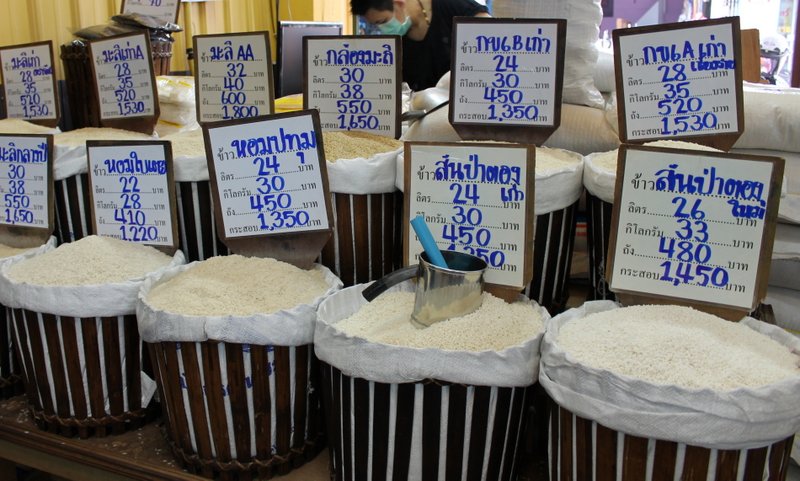 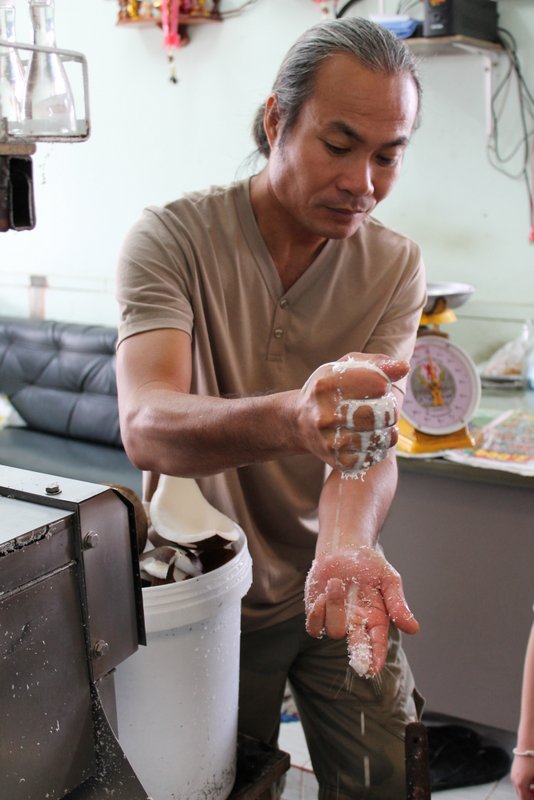 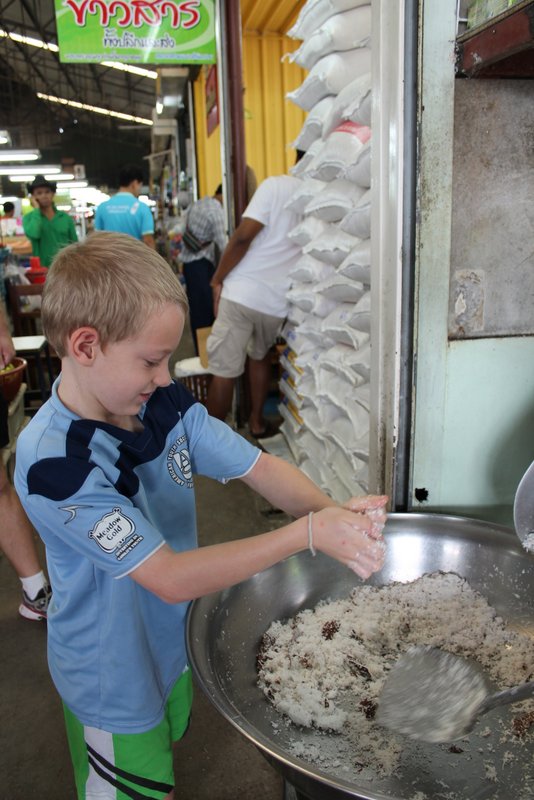 Beckett giving it a try

After the market tour we headed to Sammy’s farm.  He first showed us different ingredients, passed them around and explained how/when they were used.

Then it was time to start cooking.  First up, making curry paste.  I made a yellow curry and Chuck did a jungle (red) curry.  Actually, I should say Beckett made my paste and Mara did a large chunk of Chuck’s. 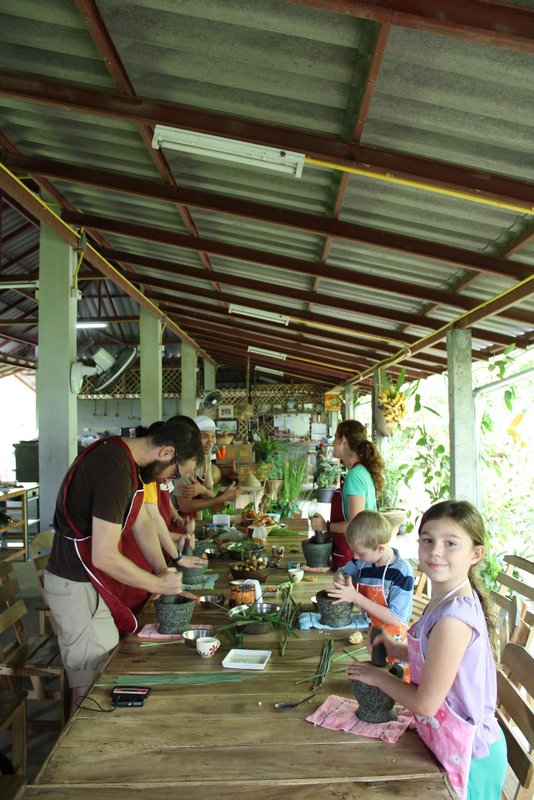 After the curry paste was made, it was time to cook it with chicken and other ingredients to make our final dish.  When that was done, it was onto soup dishes: Chicken in Coconut Milk soup for me and Thai Vegetable Hot soup for Chuck.  They gave Mara her own station to make coconut milk soup so I actually got to cook alone while Beckett took over making the veggie soup for Chuck. 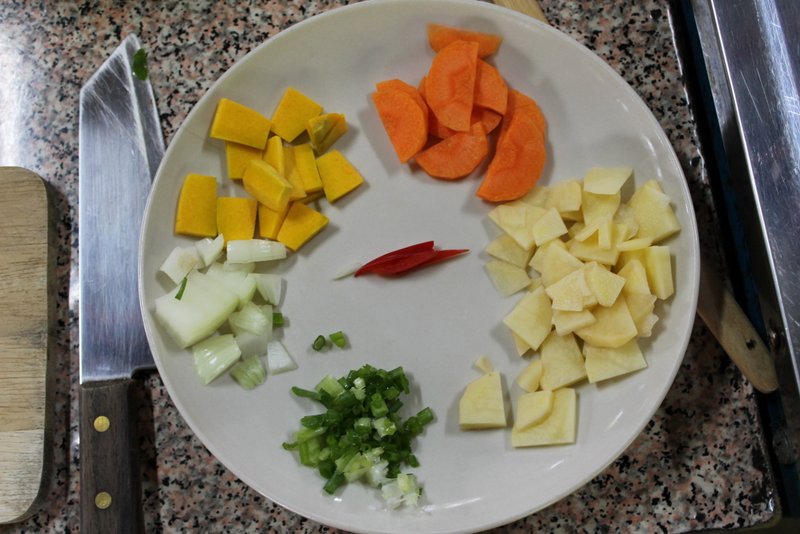 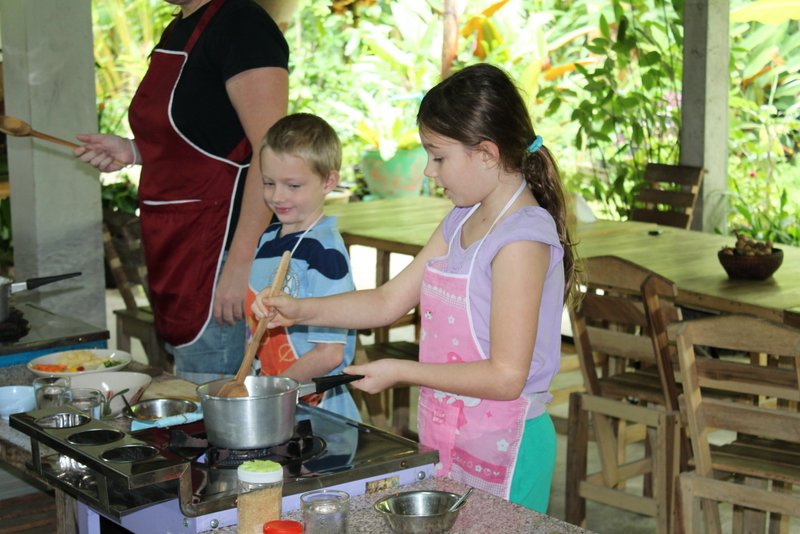 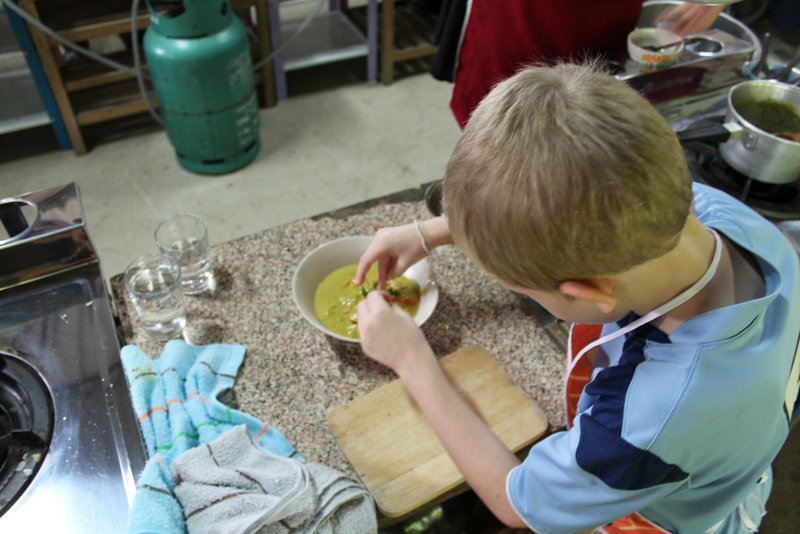 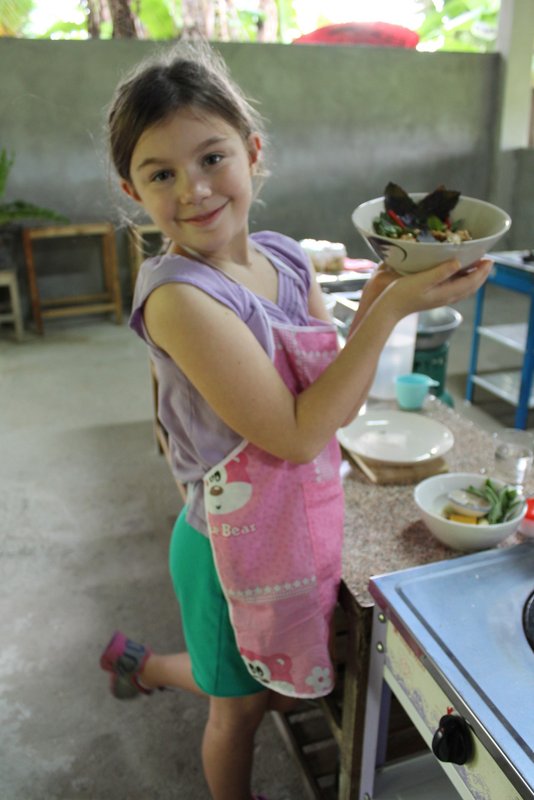 Mara showing off her Jungle Curry 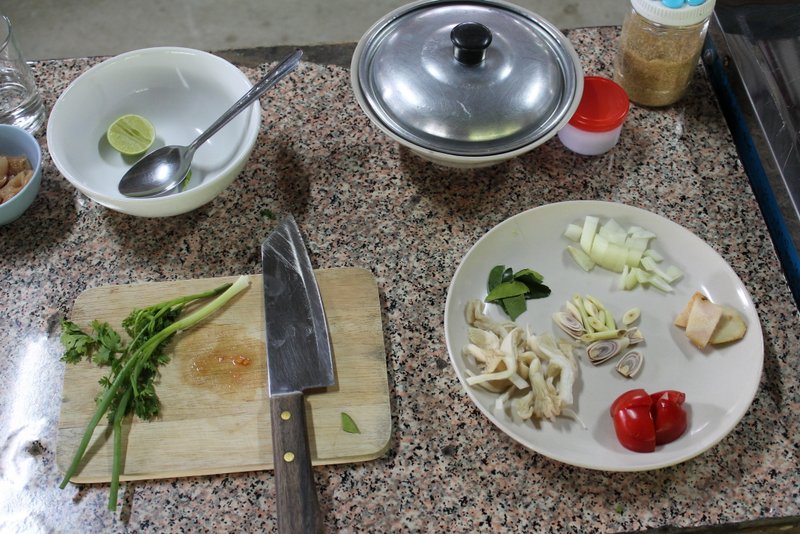 Next up was the stir fried dishes: Stir Fried Chicken with Holy Basil for Mara (I pretty much watched) and Pad Thai for Chuck and Beckett.

After all 3 dishes were done, it was finally time to eat.  And eat.  And eat some more.  It was so tasty.  And better yet, Beckett who won’t try anything devoured the vegetable soup, tried Pad Thai noodles and even tried a bite of yellow curry!  Mara loved the yellow curry and the chicken with basil and mostly took down her bowl of coconut soup single-handedly.  So not only did the kids cook and learned some things, THEY TRIED NEW FOODS!!!!!  Hallelujah! 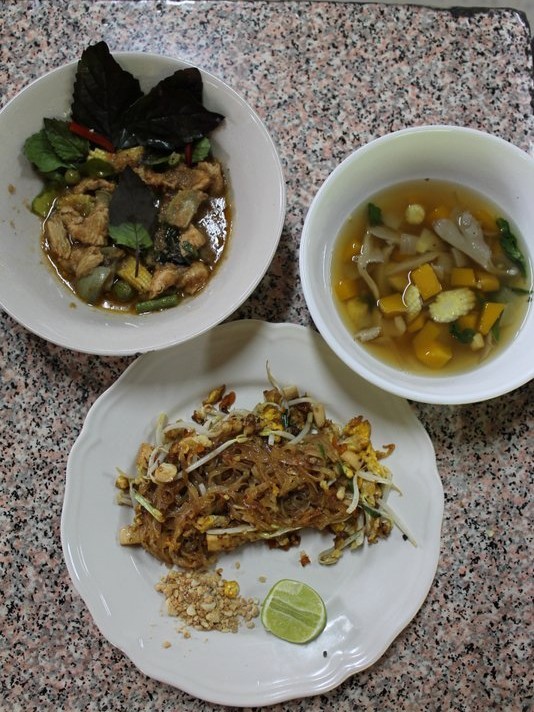 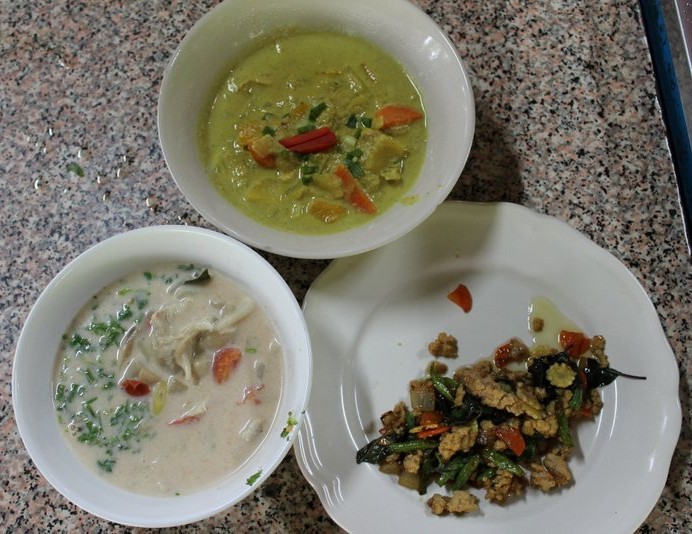 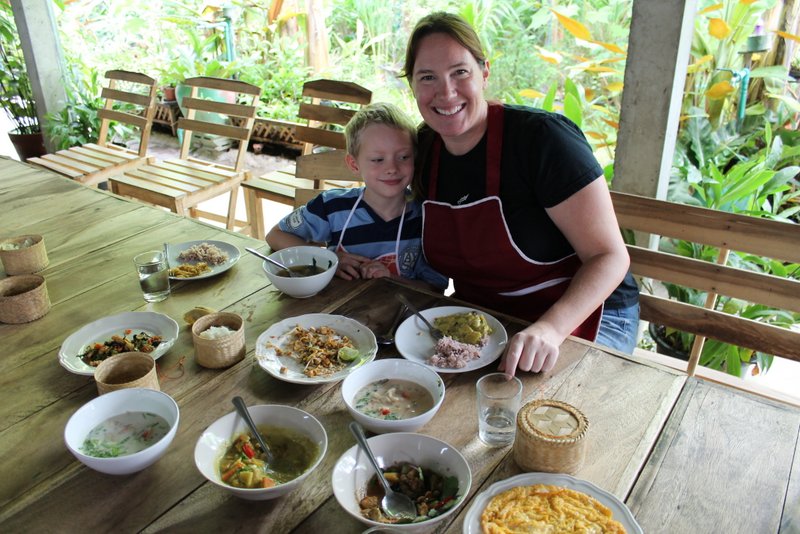 With full bellies, it was time to walk around the farm a bit then take a siesta in the hammocks strewn about the property.  I so need to get me a hammock. 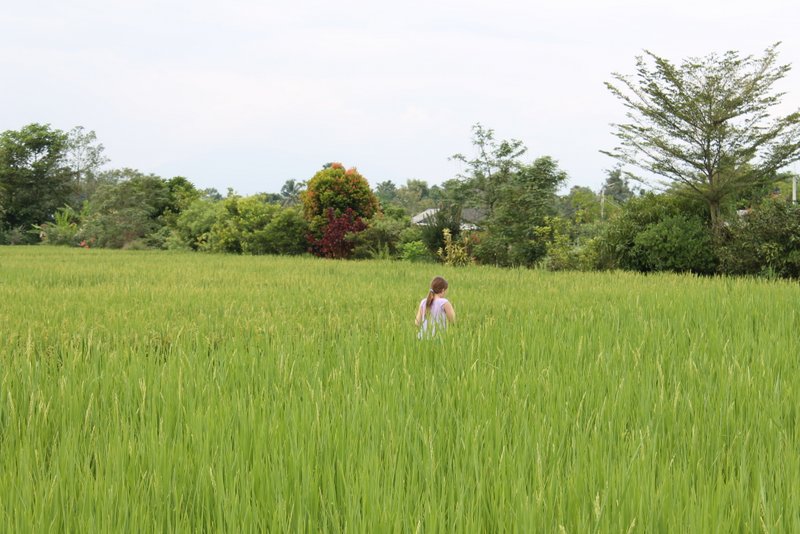 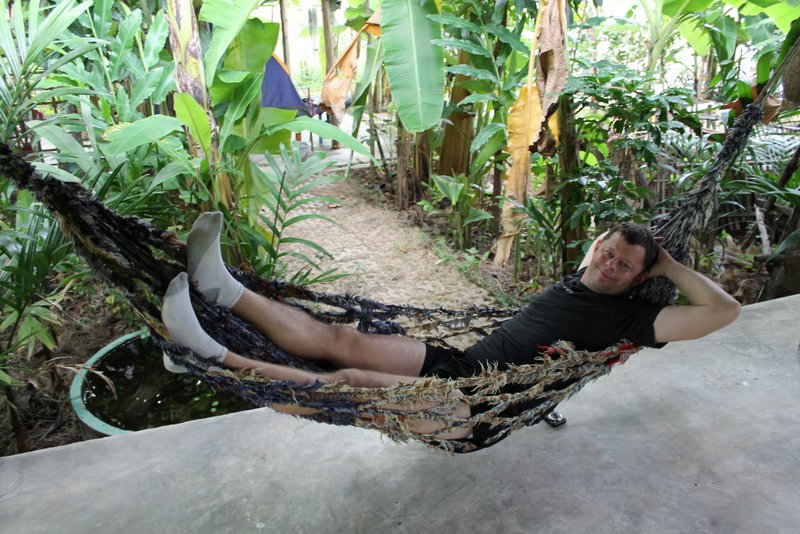 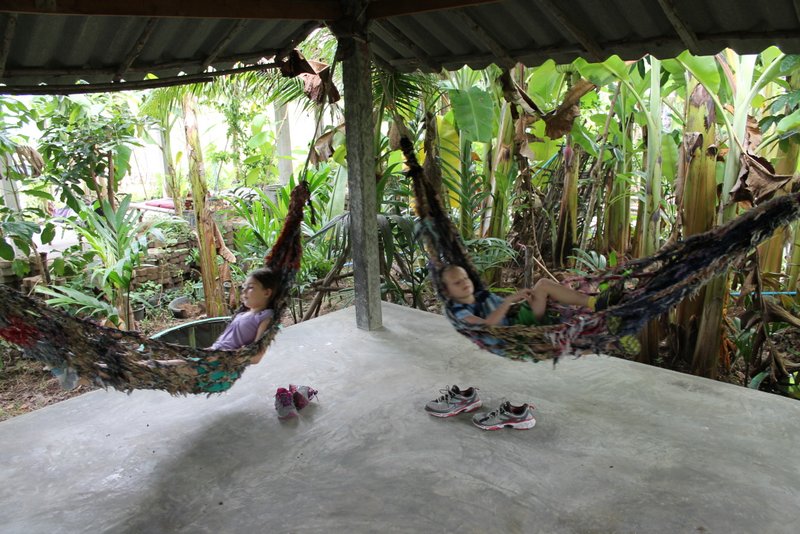 An hour later it was back to cooking.  First up was Vegetable Spring Rolls for Mara (Beck even rolled one) and Chicken in Pandanus Leaves for Beckett and Chuck. 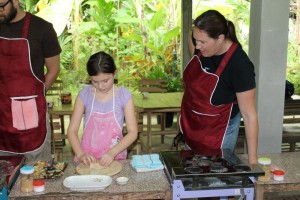 Then Beckett and Mara made Pumpkin Custard while Chuck made Mango with Sticky Rice.  My role at this point was just to take pictures and watch. 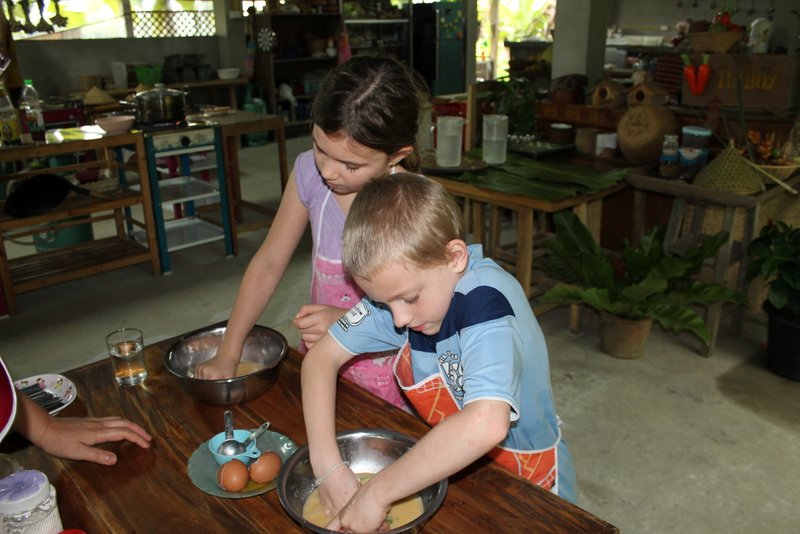 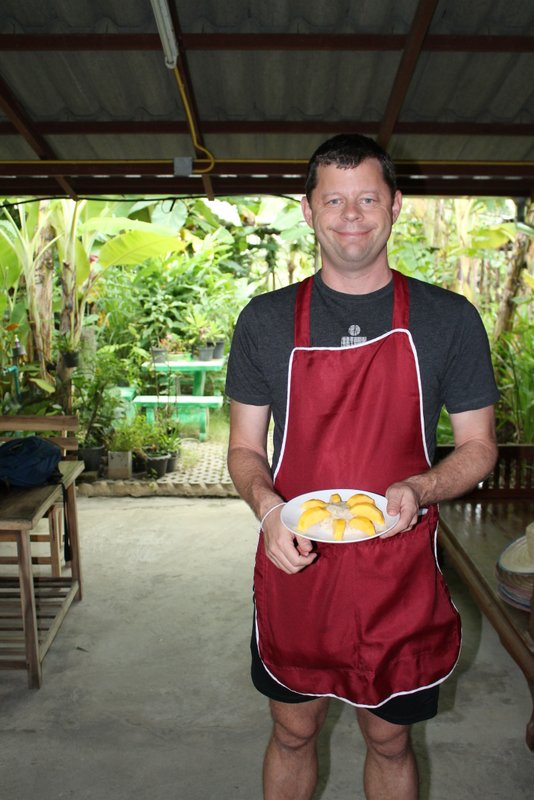 Chuck with his Mango and Sticky Rice

Once again, we ate and ate before we made the trek back to town around 4pm. 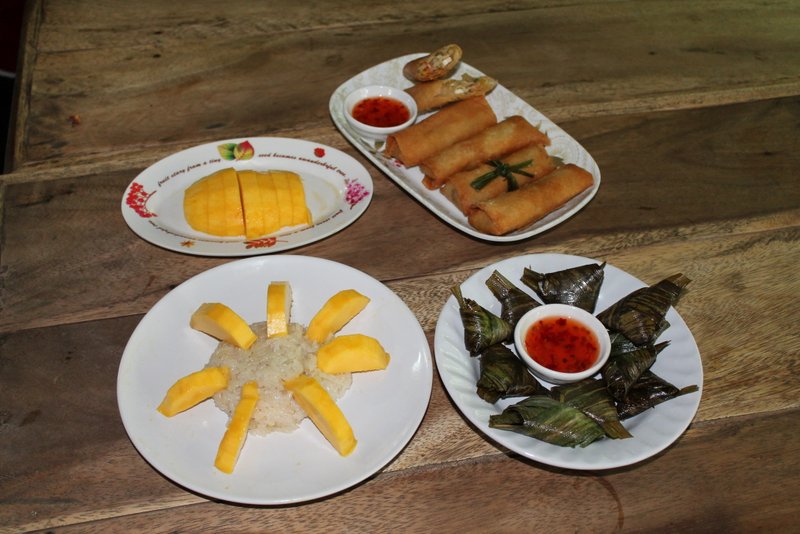 I must say, I was blown away by the kids today.  I couldn’t believe how well they were able to cook all by themselves and how quickly they picked everything up.  We do let them cook at home (and Mara is turning into quite the little baker) but still, this involved some chopping with huge knives, working on the stove including adjusting the heat, and even garnishing the dishes to make them look prettier.

Aside from making the coconut soup, I barely cooked all day which I’m completely fine with.  I acted as a sous chef for a couple of things and then got to stand back and observe my children learning, growing and turning into big kids.

The whole way home Beckett was asking if he could cook dinner for all of us the next night and they’re both clamoring to shop and cook a Thai meal all on their own.  I couldn’t have asked for a better day!

The logistics: We booked with Sammy’s Organic Thai Cooking School which is a bit out of town in a beautiful location surrounded by rice paddy fields.  Sammy picked us up at the Thae Pae gate around 8:30am and we arrived back there around 4:30pm.  Cost was 1,000 Baht ($33) for each adult and 100 Baht ($3.30) for each kid.  The best way to book is to call as my email wasn’t answered.

I took a different cooking class a week before and they were both a different experience.  The Red Chili class was very methodical and you measured, chopped, watched him cook, then cooked everything on your own.  Definitely a great way to be able to duplicate recipes back home and really learn how and why you’re doing what you’re doing.  The one with Sammy was a bit less formal and you didn’t have to do as much measuring and thinking.  For example, sometimes they’d come by with a bowl of coconut milk and ladle it in without telling you how much they were adding or why.  However, it was still fun and educational, but I’d feel less able to go home and recreate my dishes if I’d just gone to Sammy’s.