We just finished spending 3 days in Barcelona and loved it!

After taking an early-Saturday flight in from Malaga, we wandered up La Rambla (a big pedestrian/shopping street), then went to the FC Barcelona football game that night.

Sunday was pretty chill, as we went up to Guell Park, then just wandered and ate.

On Monday, we went to La Sagrada Familia, the church designed by Antoni Gaudi.  It was really spectacular and much different from “normal” churches.  We took an elevator to the top and got a great view of the city.  After that, it was more wandering and eating, then early to bed to catch our 6:15 am flight back home on Tuesday.

We covered the football game and La Sagrada Familia in separate posts:

It’s really hard to call Barcelona anything but a Grand European city.  We spent a lot of time strolling and eating, which really is the way to enjoy a city like this.  There was so much detail in the architecture, public spaces, and food options, that it would be a shame to rush just to see the A-list attractions.

After being in Spain for about a month, one thing about going to Barcelona threw me for a loop initially – most of the signs aren’t in Spanish.  What are they in, you ask?  Well, they’re in Catalan.  Barcelona is part of Catalonia, an autonomous community within Spain’s borders, and they’ve got their own language.  Many signs also have Spanish listed below, and from what I could tell, many people speak both.  But Catalonian independence is a hot issue, which may come to a vote in 2014.  Didn’t directly affect anything for us, but it was interesting to observe.

The kids were both reluctant to go, since we’ve spent a lot of time on the road in the last few months.  But they ended up having a good time at the football game, feeding pigeons, and snacking around the city.  Kirsten and I loved the look and feel of the city, all the little bars and cafes, and the overall vibe.  We’d love to get back for a few days without the kids someday. 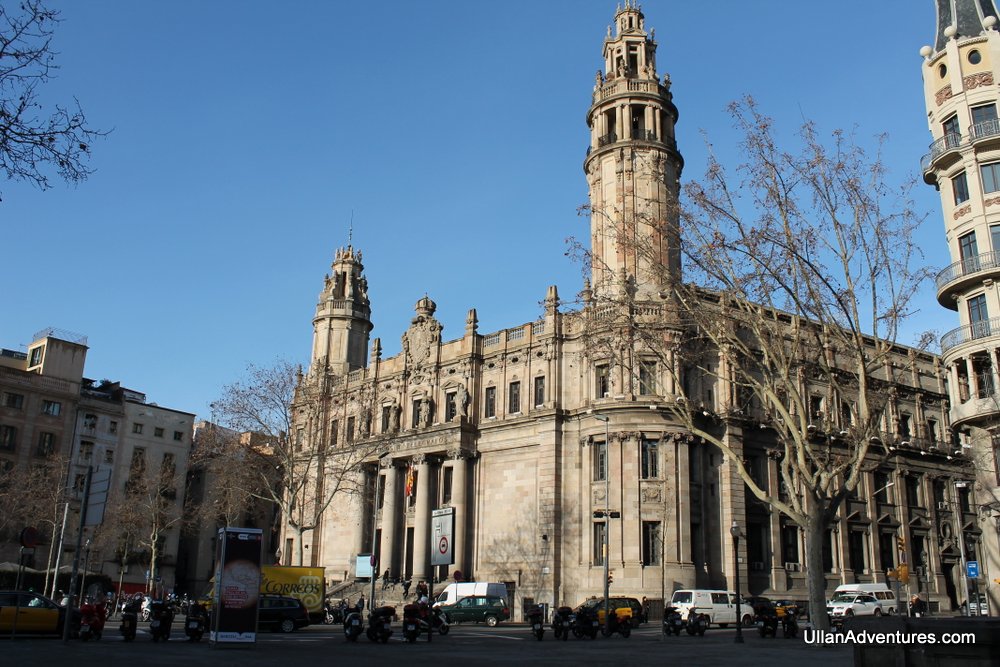 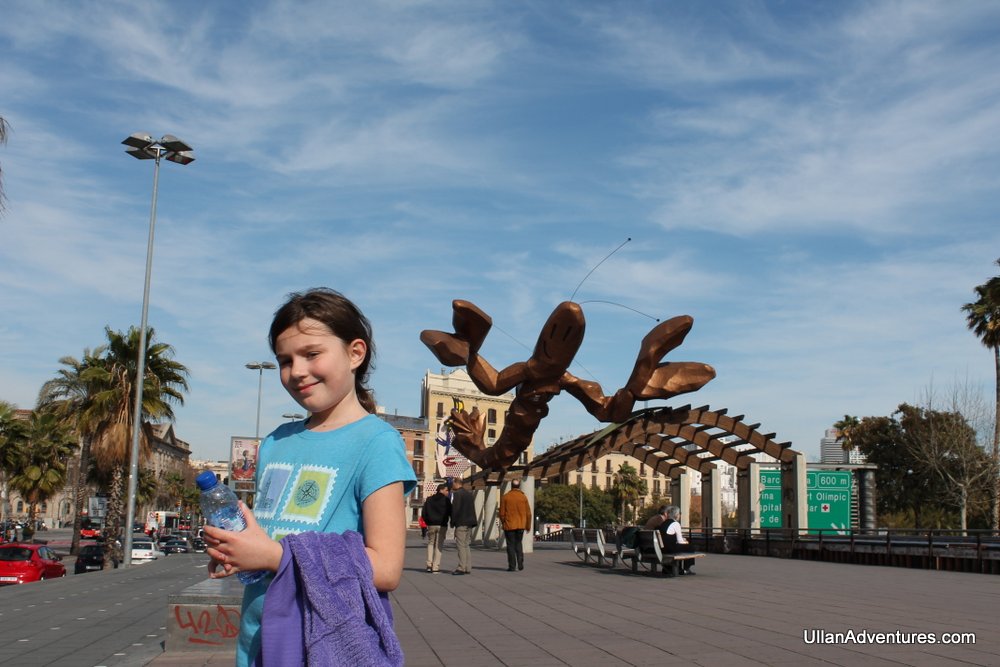 Don’t trust the smile on that lobster’s face! 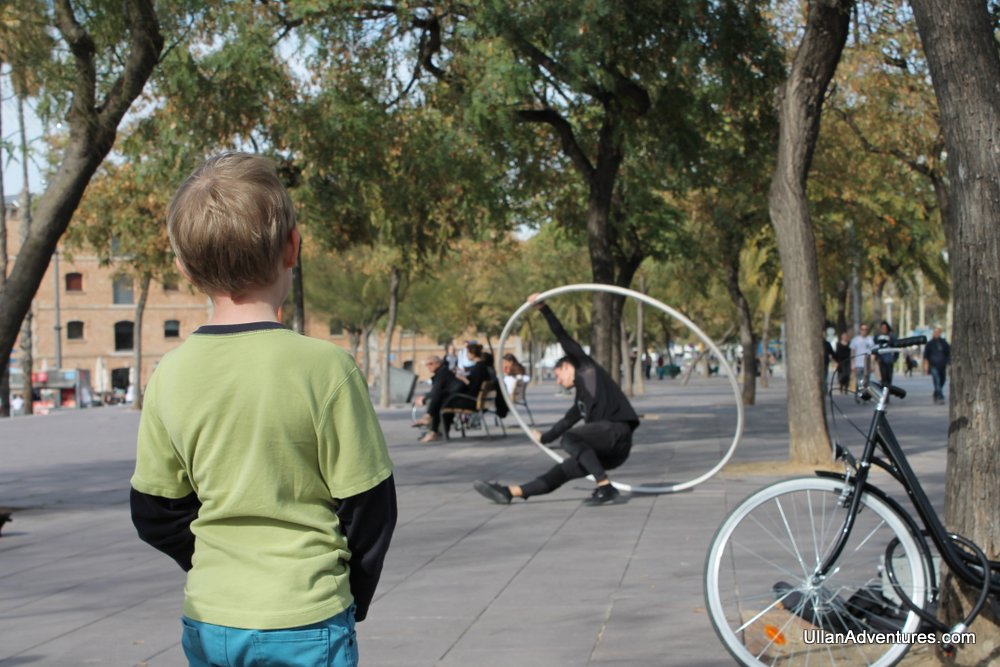 Lots of street performers around.

Next 4 pictures are from Park Guell.  It was kind of interesting, but not really worth the cost of getting in (about 28E / US$40 for the family). 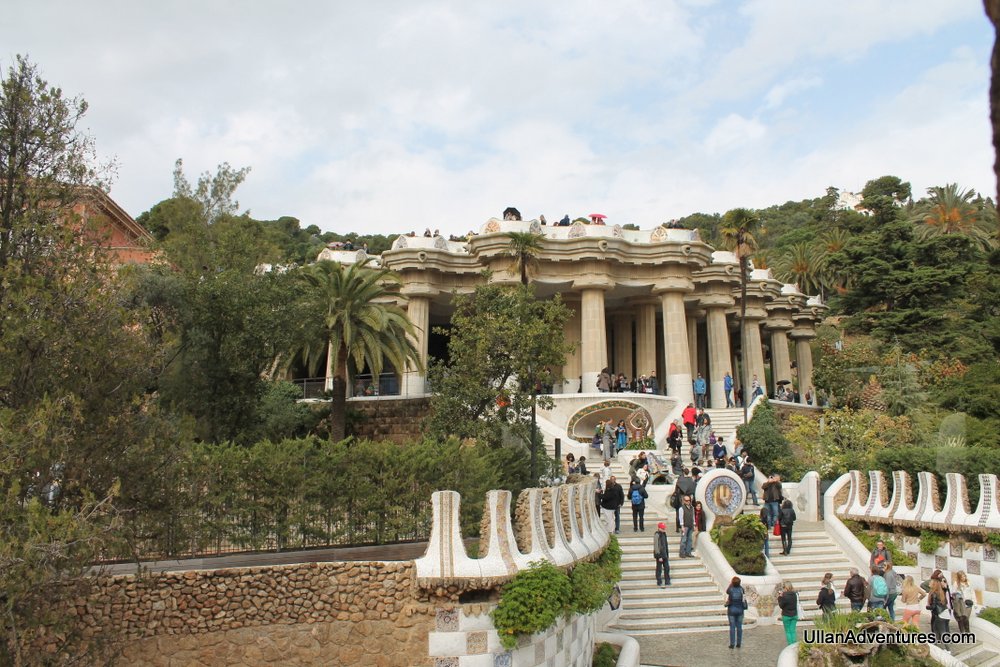 Front view of the most popular section of Guell Park. 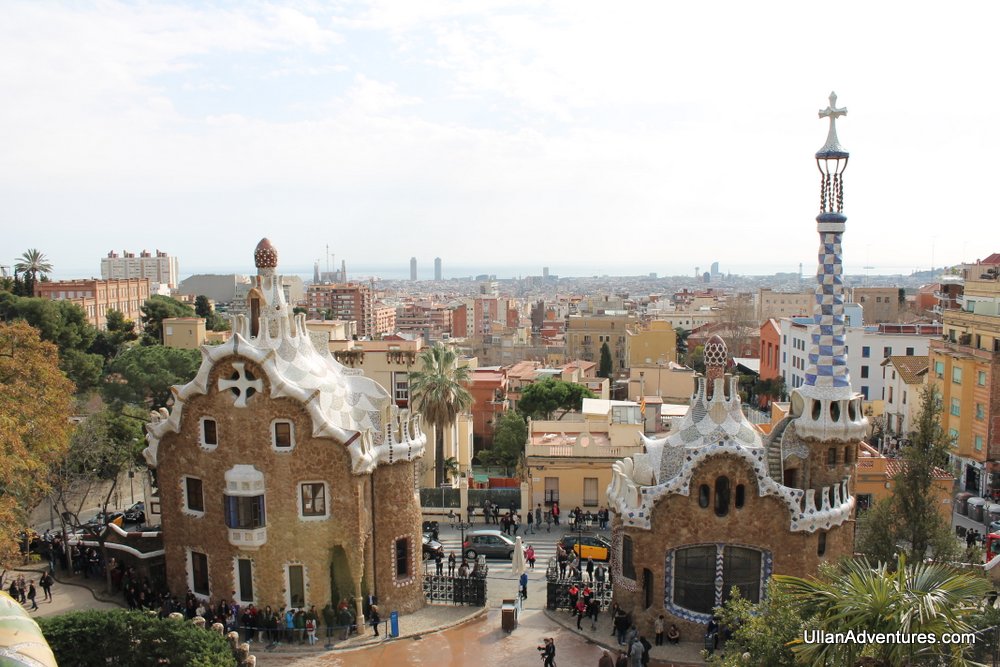 Great view of the city and ocean from the top of the park. 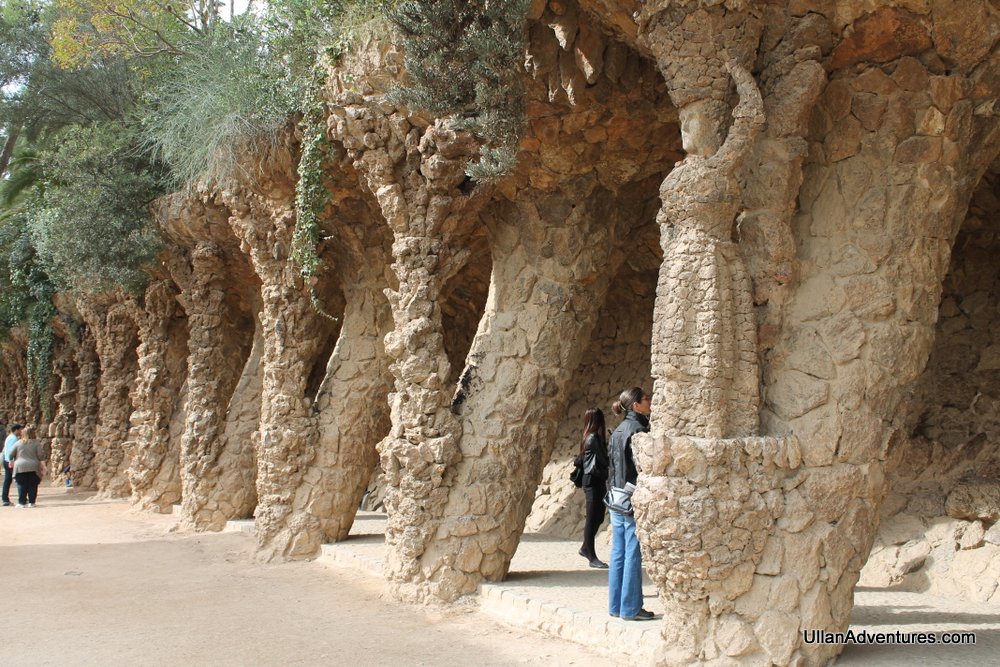 Interesting stone work. The walkway behind is also kind of cool, but the pictures didn’t turn out. 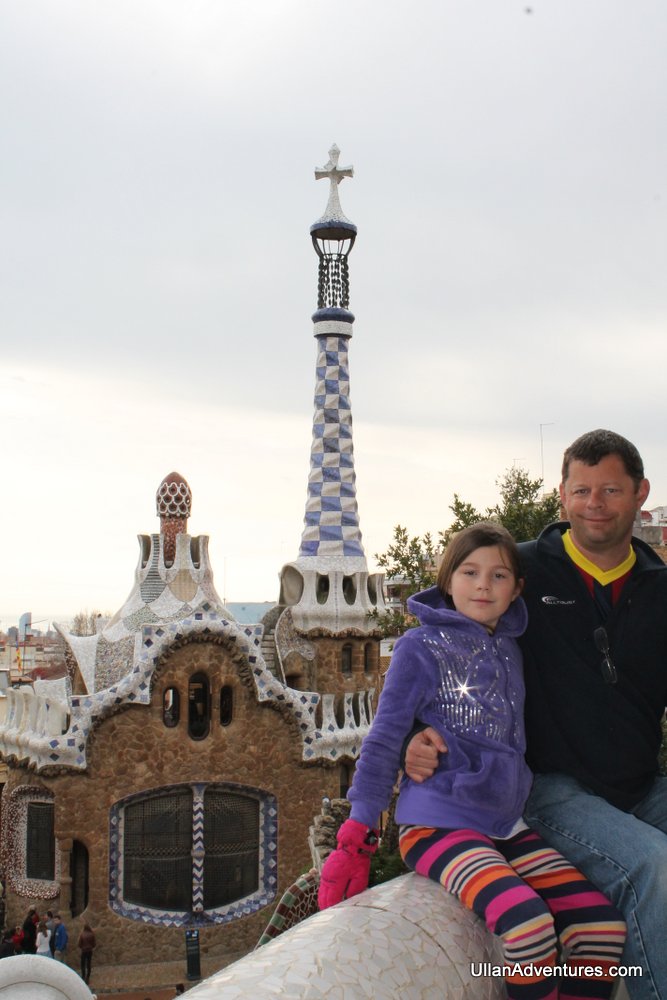 The big boulevards like La Rambla had plenty of cool buildings: 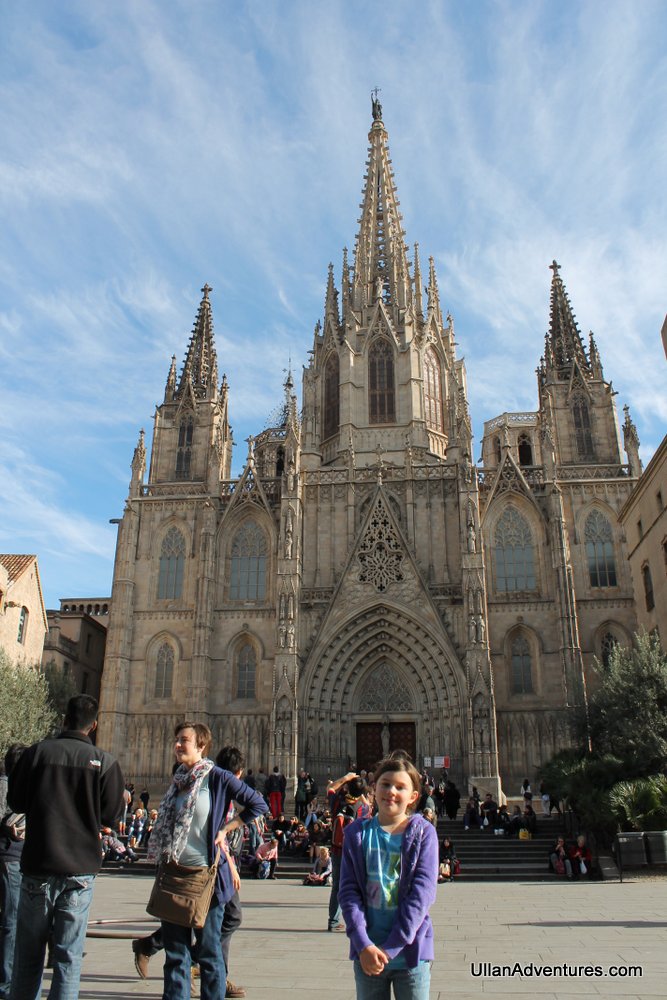 Mara at the Cathedral, not the same as La Sagrada Familia. 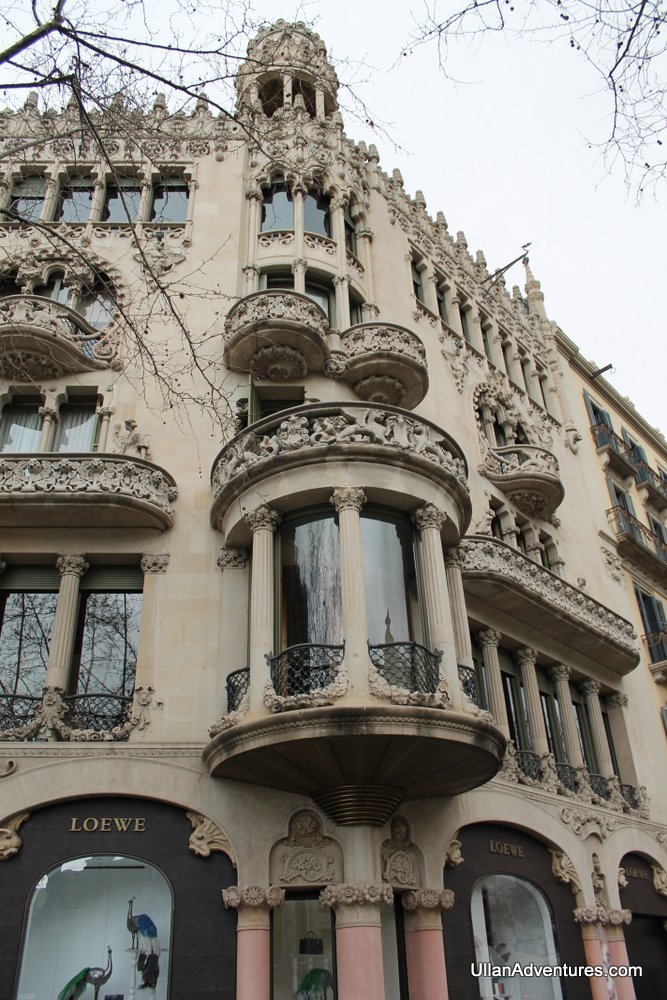 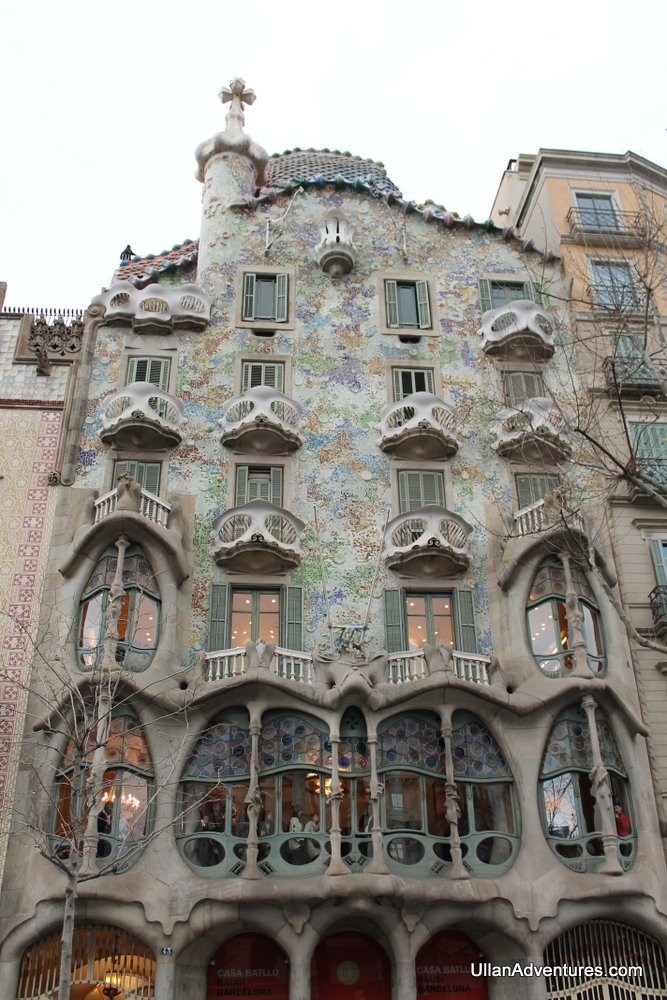 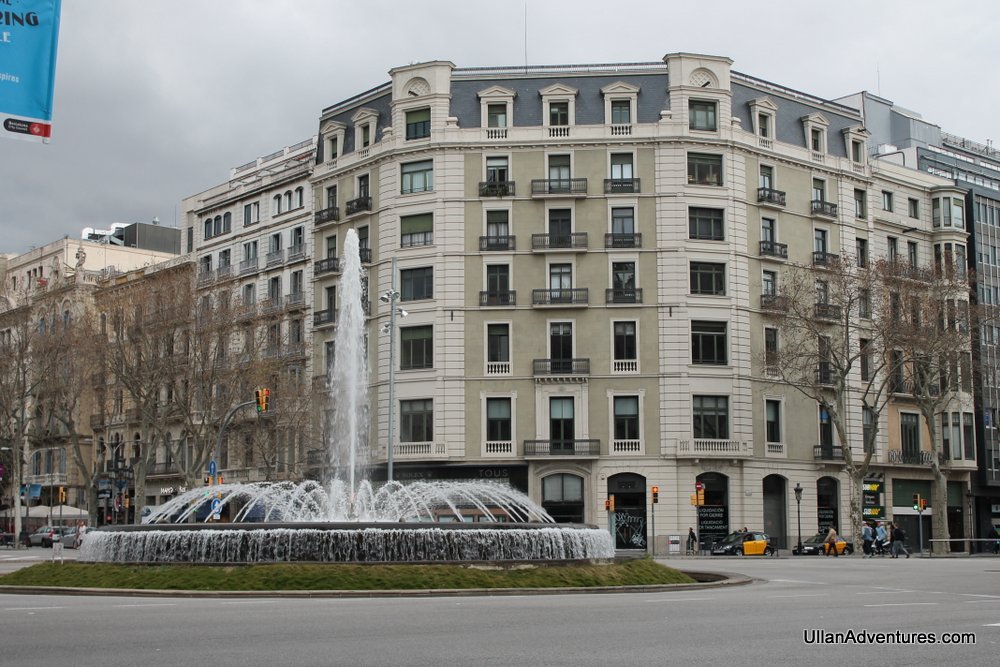 Nothing famous about this, just interesting 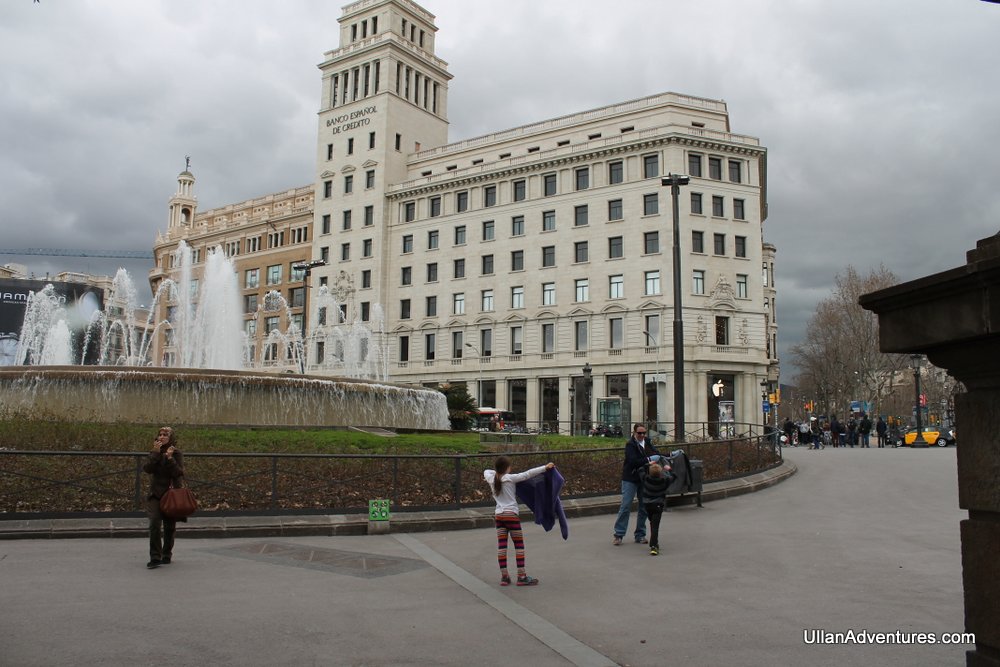 A little play at Plaza Catalunya 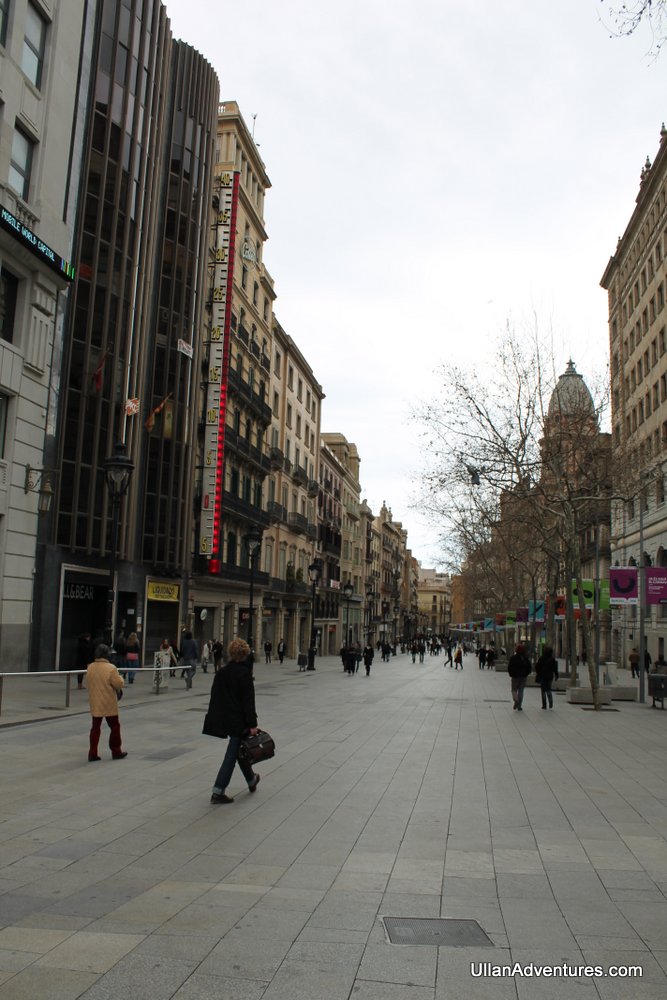 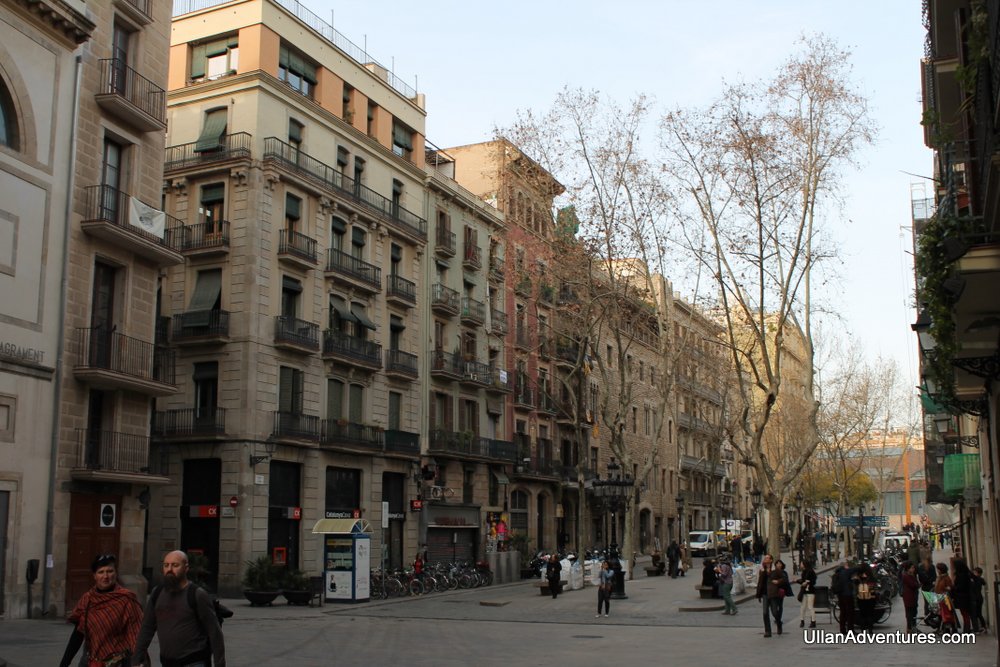 The side streets also had plenty of interesting stuff to see. 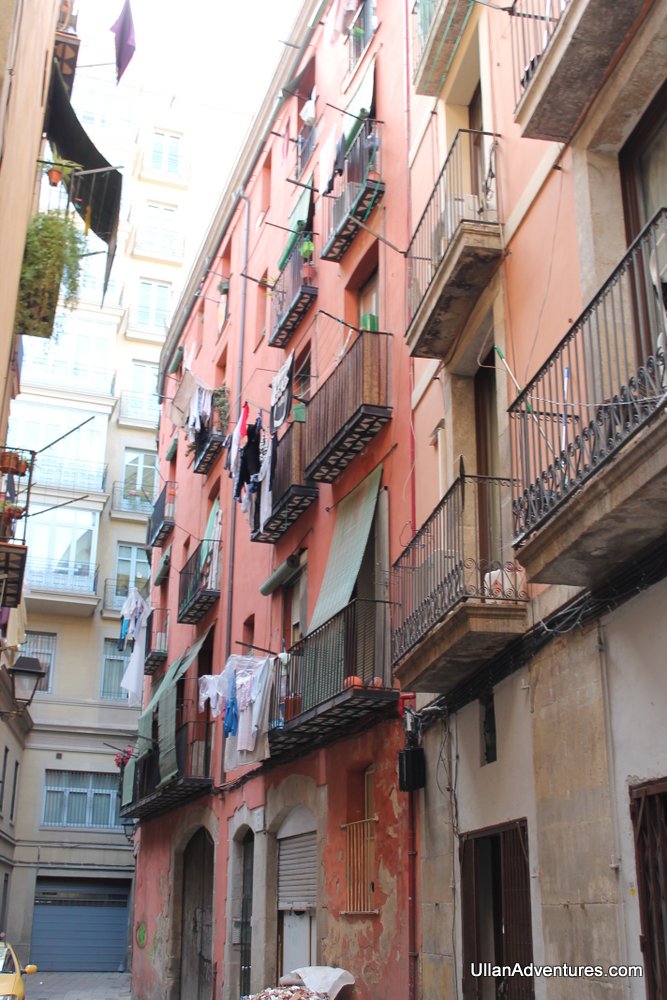 Must be laundry day 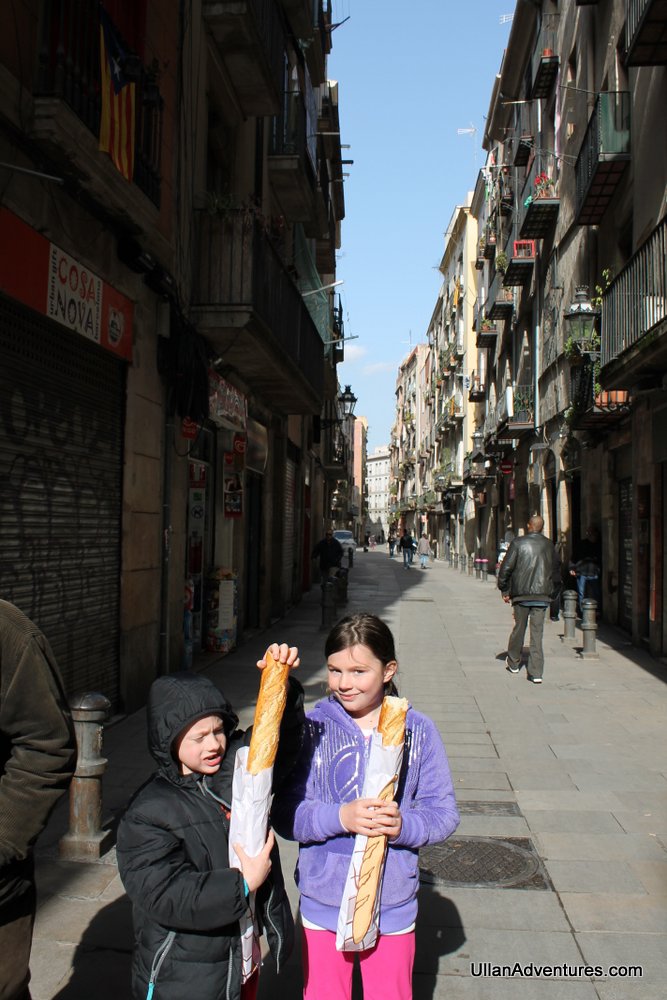 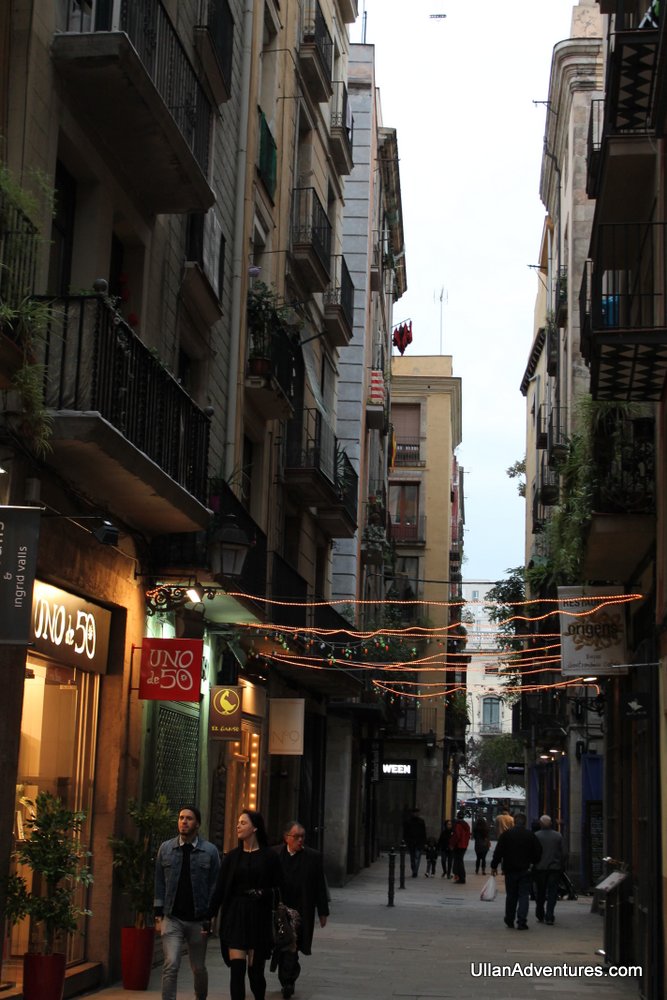 Mara and Beckett got to do one of their favorite things – chase pigeons! 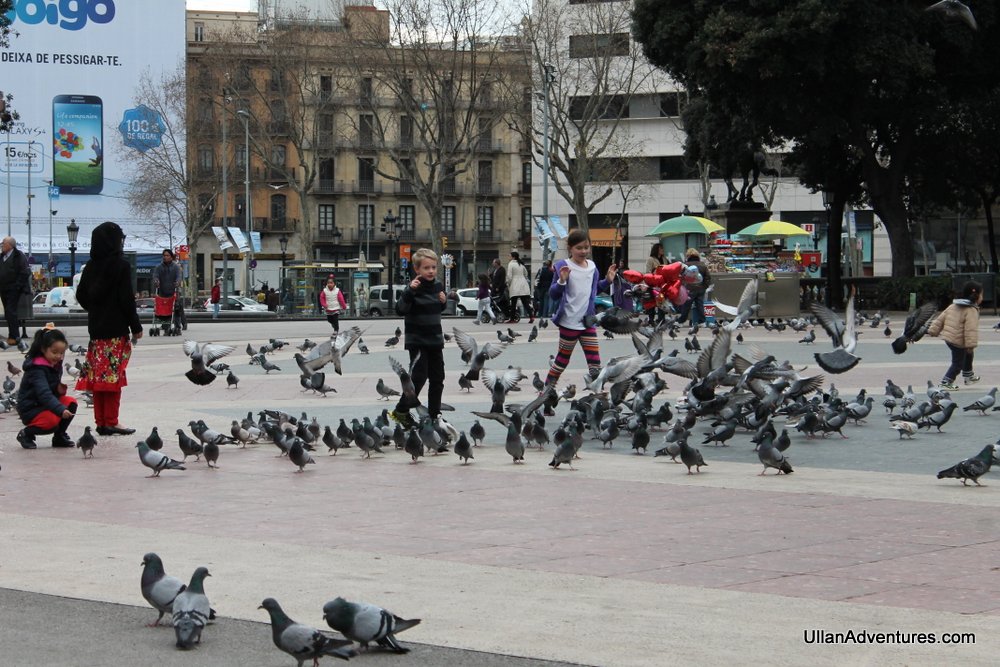 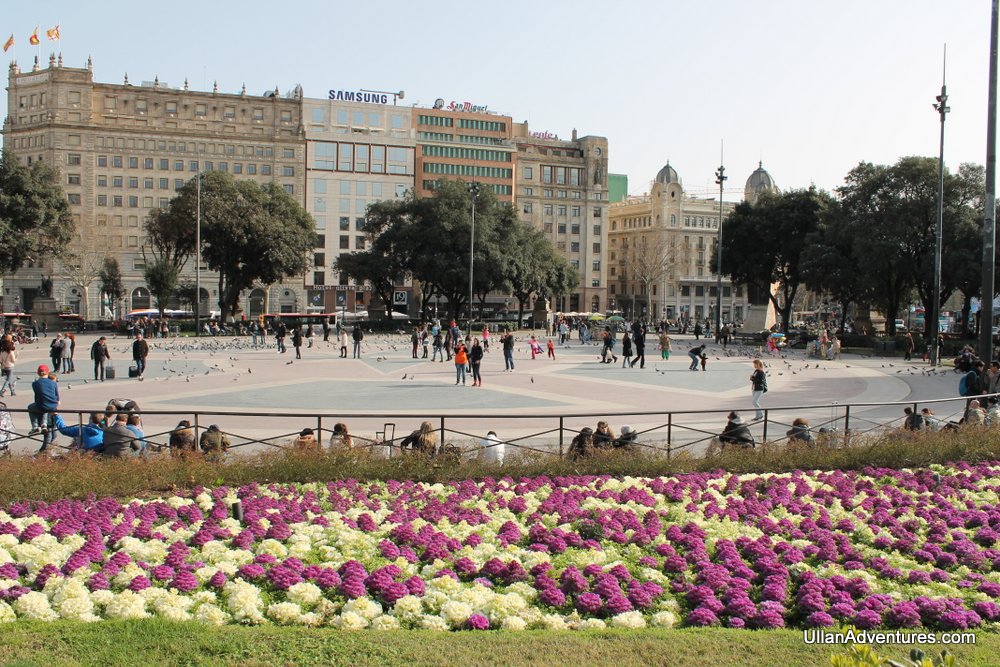 We also found breakfast at a place called Milk Bar, which had insanely good French toast, topped with berries and Greek Yogurt. 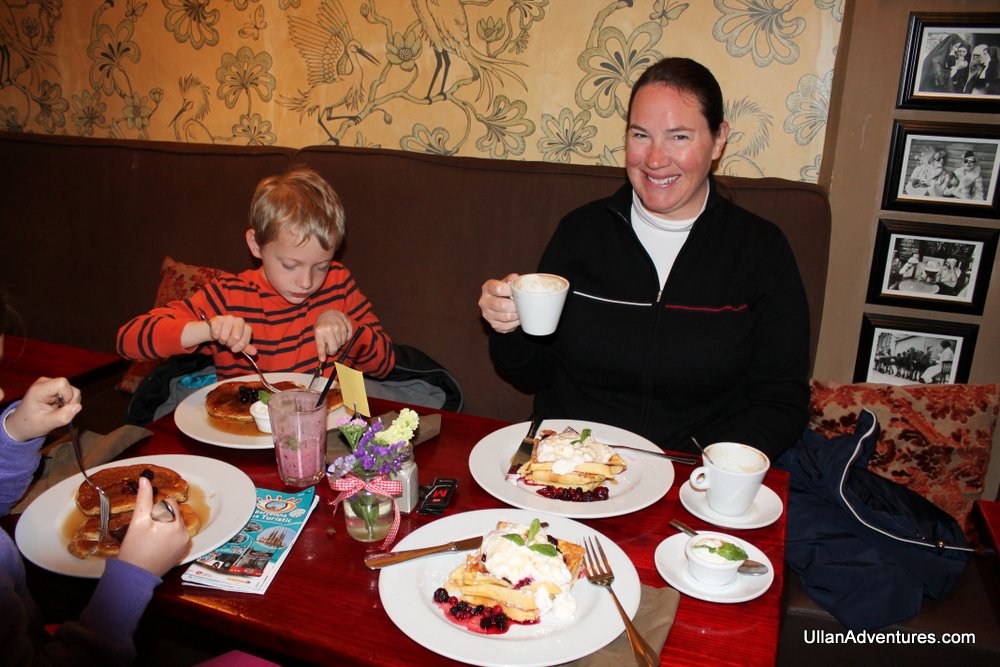 Finally, who doesn’t like a city where you can get Happy Pills?! 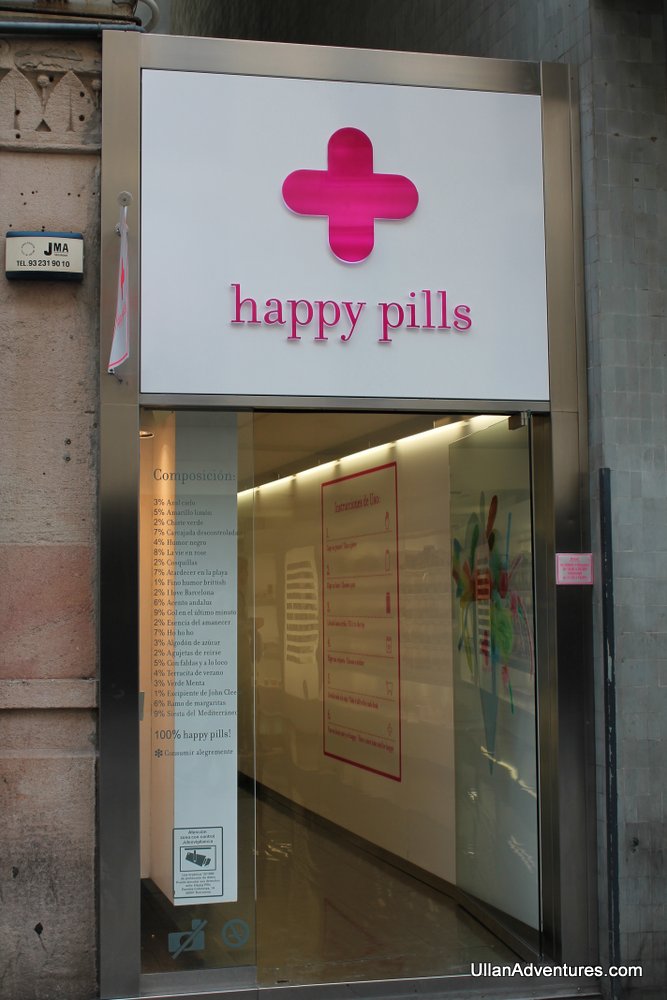 Logistics: We stayed at Som Nit Born which had basic, but clean family rooms and was located near the Gothic Quarter and other sites.