3 Days of Wine and Wandering in Sonoma & Napa

Despite our travels in 2013 and 2014, we hadn’t had an adults-only vacation for about 2 years.  Luckily Chuck’s mom Carla came to the rescue, and flew down to babysit the kids while we went to Sonoma and Napa for 4 nights.

Our first night was spent with Chuck’s friend Bonny in Santa Rosa.  In the morning we had a great breakfast then got a tour of Bonny’s property including her 2.5 acres of grapes.  Then it was off for some wine tasting!

We dropped our car off at Coppola then drove to Stonestreet Winery which is owned by Jackson Family Wineries.  Bonny has been here multiple times and knows one of the executives so we got VIP (free!) tastings.  We sat outside looking at a gorgeous view as we were treated to both the white and red wines.  I’m not usually a big white wine drinker but the one Chardonnay was the best Chardonnay I’ve ever had (I think it was the 2012 Cougar Ridge Chardonnay).

Then it was on to tasting the reds.  These were some of the best red wines I’ve ever had.  I think it was the 2012 Cougar Ridge Cabernet Sauvignon that was amazing.  Smooth, balanced, with many subtle flavors all blending together in perfect harmony.  They also brought out a few of the high end “back room” wines.  Once again, the red wine, 2010 Christopher’s Cabernet Sauvignon, was beyond words and Chuck and I “fought” over each sip.

The two of us with Bonny at Stonestreet. Wonderful place to relax and enjoy wine!

After our time at Stonestreet, we made a quick stop for lunch and then drove back to Coppola.  The best thing about being here was the grounds and all the movie memorabilia.  We even got to see his Oscars which was pretty cool.  Once again Bonny hooked us up with a free tasting although I didn’t really enjoy any of the wines. 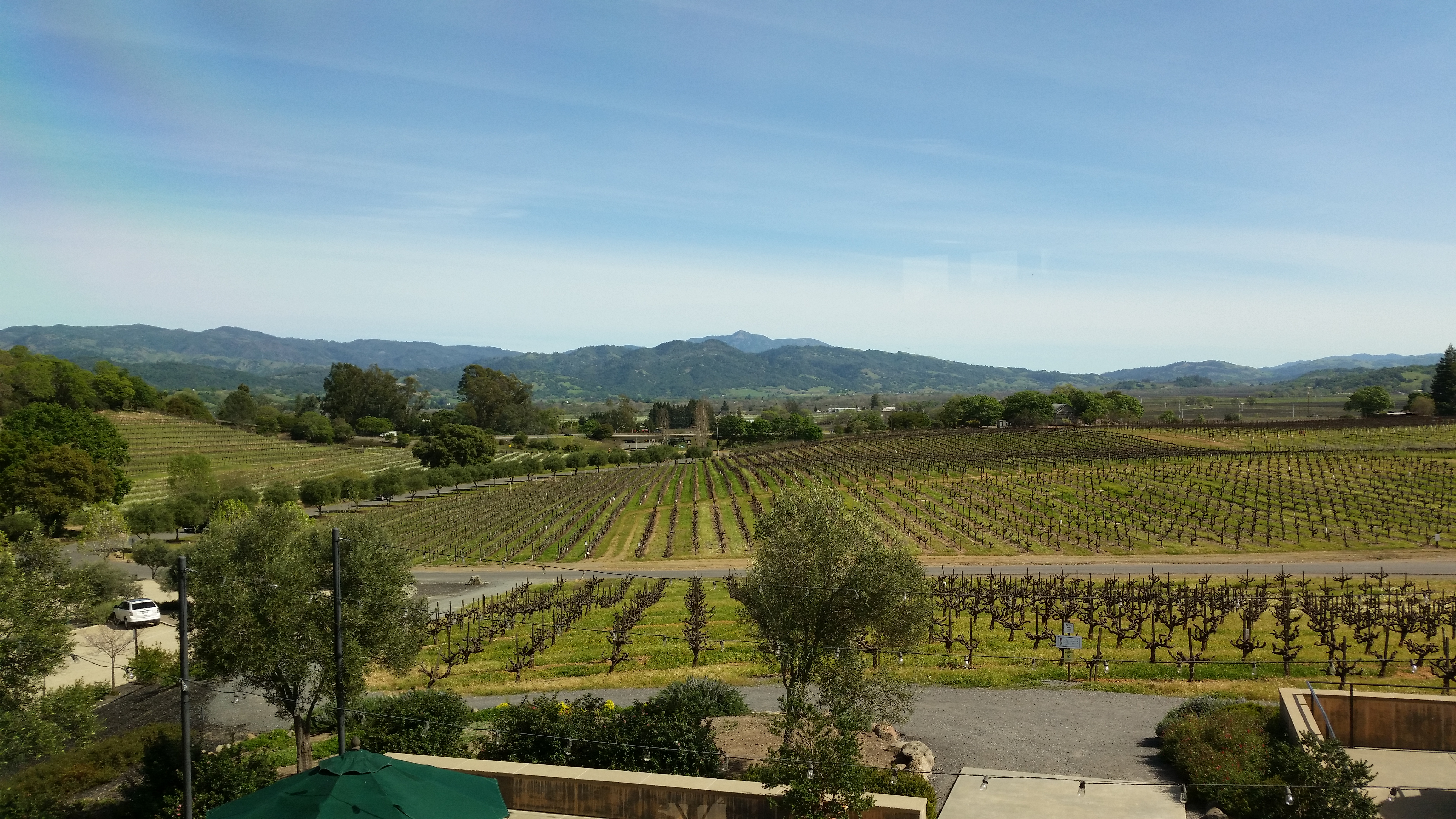 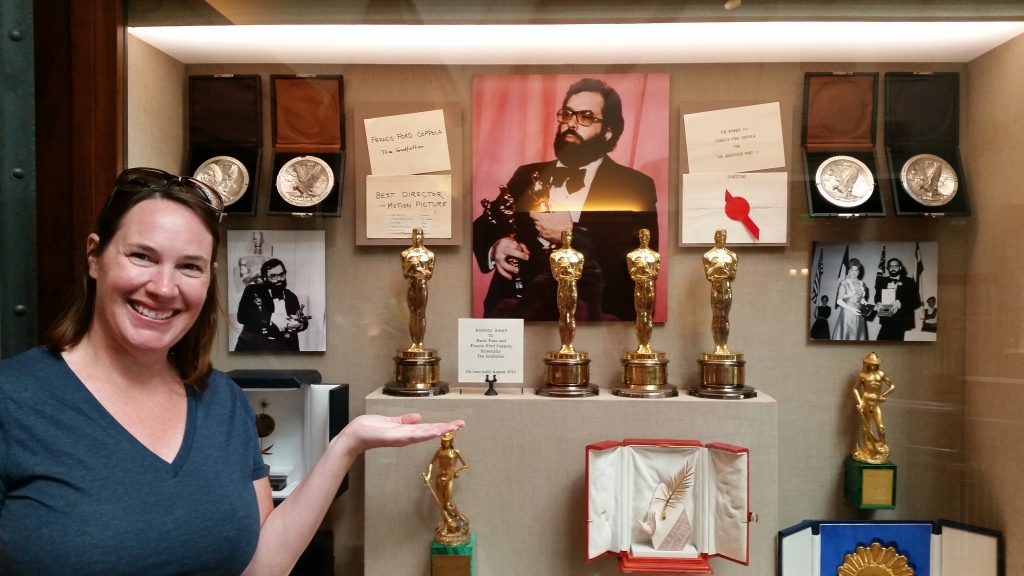 Bonny had to leave us at this point but suggested DaVero which is a small farm and winery.  Not only did they have pretty good wine, but they had delicious jam and olive oil.  They also had the cutest little piglets we got to see.

We were pretty full of wine at this point (well I was, Chuck was driving), so we headed to Healdsburg for dinner.  After a fine dinner at Healdsburg Bar & Grill, we headed to our hotel, the Hampton Inn Windsor, checked in and went to bed pretty early.

On Friday, it was off to Napa!  First we drove to Calistoga and had some BBQ before another free tasting (thanks again Bonny!) at Freemark Abbey.  The wines were pretty good but since we’d been spoiled at Stonestreet, they didn’t seem like anything to write home about.

Then we drove to Yountville to pick up pastries and bread at Bouchon Bakery.   The macarons were a close second to the ones at Ladurée in Paris.  So good!

Next up was Cakebread.  I had the highest hopes for this winery and paid extra for the special red wine tasting.  The wines sounded so good so I figured this was the place to blow the budget.  Turns out we were the only ones that signed up for this particular time so we had our own private tasting!  Score!

The bad part was that we didn’t like the wines that much.  They were good but young (so the guy told us but now I know what a young wine tastes like).  They were pleasant but lacked depth and character.  They’d probably be delicious aged for a few years but I wasn’t going to buy any at their prices and risk it.

Last on the agenda was a tasting at Domaine Carneros.  I picked this place because of the photos – it looked incredible.  They also mostly serve sparkling wines, and even though I’m not much a fan of sparkling wine, I thought it would be nice to try something different and mix things up.  Actually I should say that I didn’t used to be a fan of sparkling wine until my visit here.  They completely changed my mind.

Panorama of the view at Domaine Carneros

Our tasting consisted of 4 sparkling wines – 2 bruts, 1 rose and 1 demi-sec – although we were treated to an extra one.   They were delicious.  Interesting, balanced, well rounded and with bubbles.  Our favorite was the Blanc de Noir which is made from Pinot Noir grapes.  This stuff was so good that we enjoyed another glass AND bought our first bottle of wine to take home.  The grounds are beautiful and it was such a wonderful place to sit and enjoy a glass of bubbly while watching the world go by. 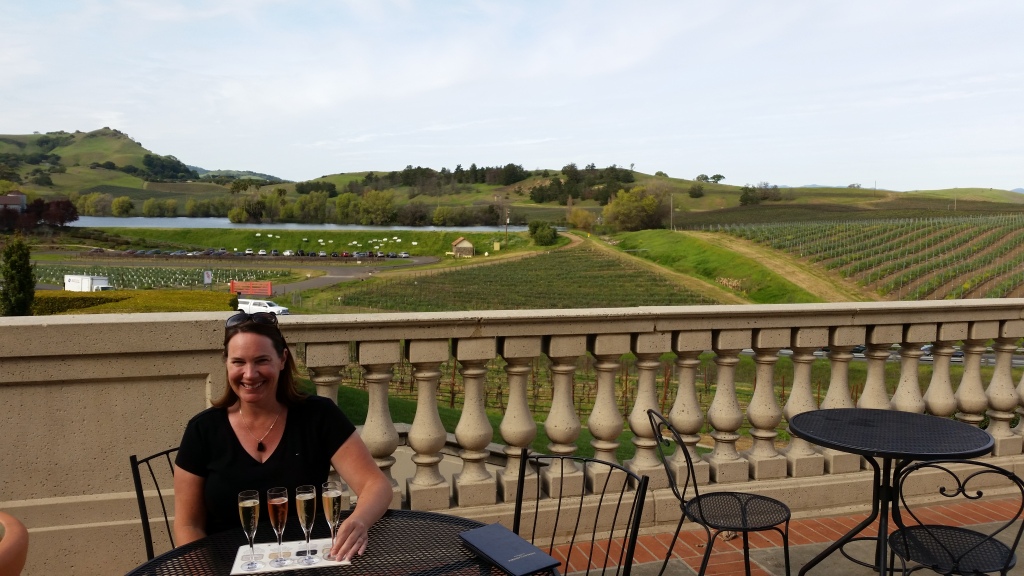 4 glasses of happy at Domaine Carneros 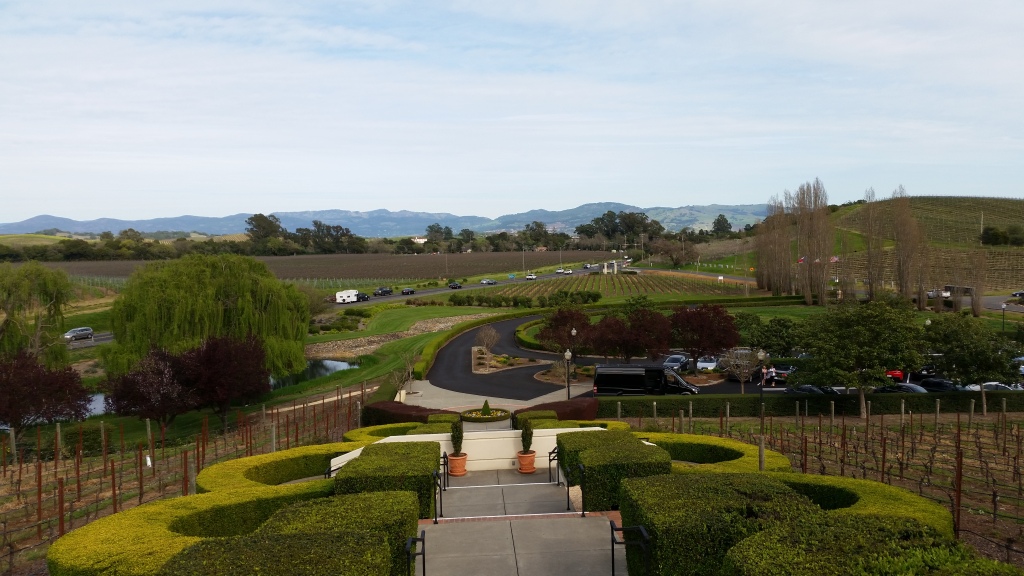 After our bubbly, it was off to dinner at Ristorante Allegria in downtown Napa.  Chuck and I had eaten here once before on our first trip to Napa and it was an amazing meal – one of those meals of a lifetime.  We had no delusions that it would be as remarkable the 2nd time but still knew we’d have a very good meal.  Boy were we both wrong.  We both ordered the same thing as last time, Wild Mushroom Ravioli for me and Gnocchi al Pesto for Chuck, and they were every bit as good as our first trip.  I think I spent the entire meal with my eyes closed savoring every single bite and making mmmmm noises.  It was that good.

On Saturday, it was Sonoma day.  We first headed to Armstrong Redwoods State Natural Reserve to see some redwoods.  There was a redwood tree there that was 310′ tall and another was 1400 years old!  Incredible.  It was such a treat to visit this park and surround ourselves in old redwood trees.  Quite amazing. 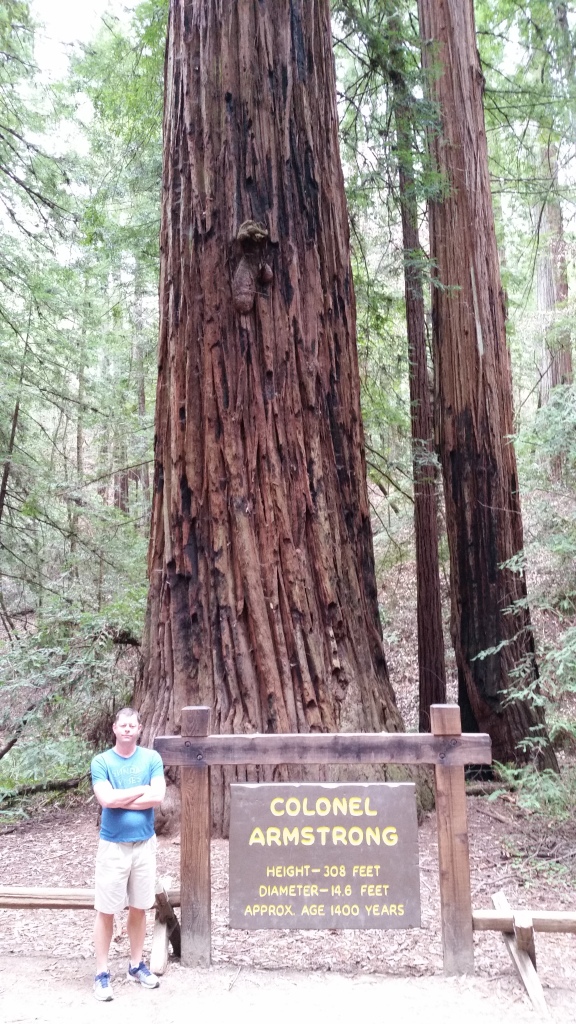 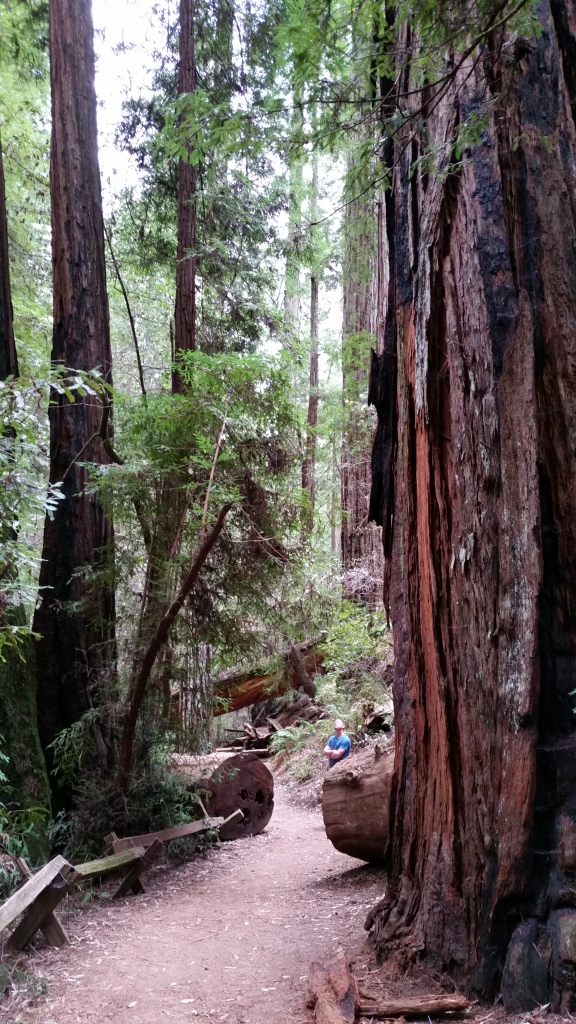 See the tiny speck that is Chuck? 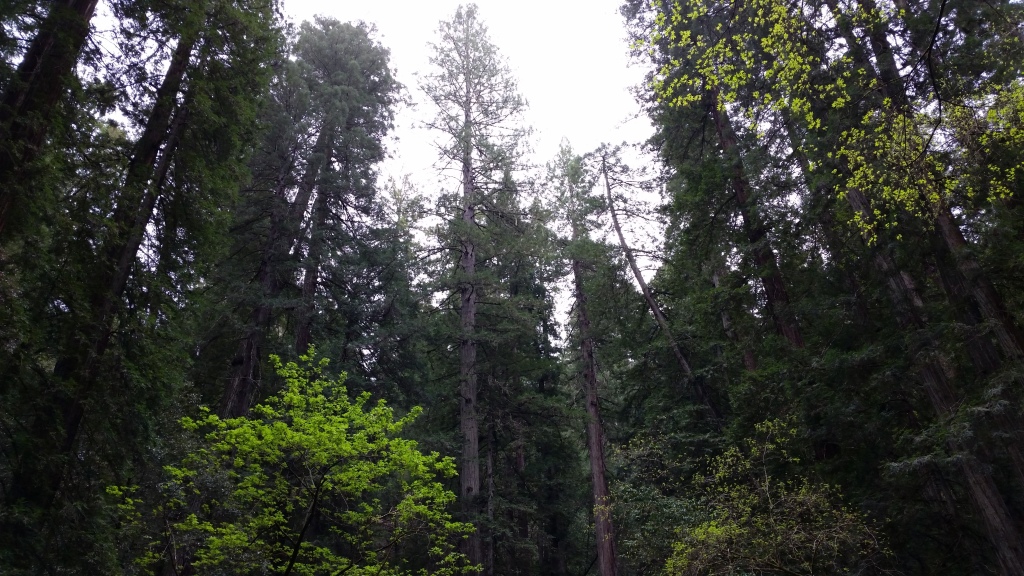 Next we headed to downtown Sonoma to check it out.  Mara had just been studying the missions of California and her assigned mission was Mission San Francisco Solano which happened to be in Sonoma, CA.  So Chuck and I stopped by to take a tour and some pictures to share with Mara. 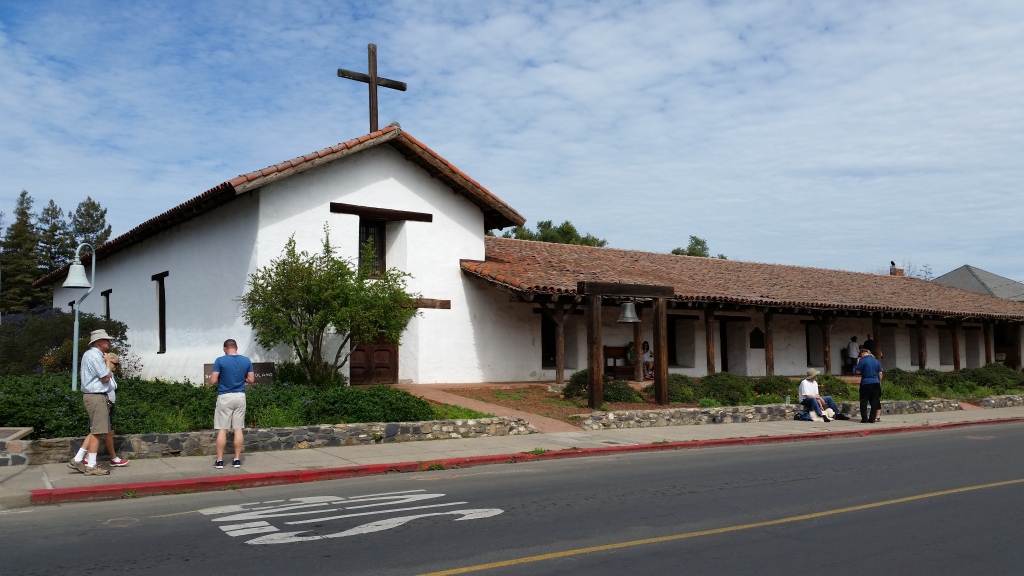 Then it was time for some more wine!  First stop was Imagery which we enjoyed.  They had a White Burgundy that I’m still thinking about and now I wish I’d bought a bottle.  I did enjoy a nice glass of it while basking in the sun.  They also had a couple of other wines I’ve never had before which is always fun. 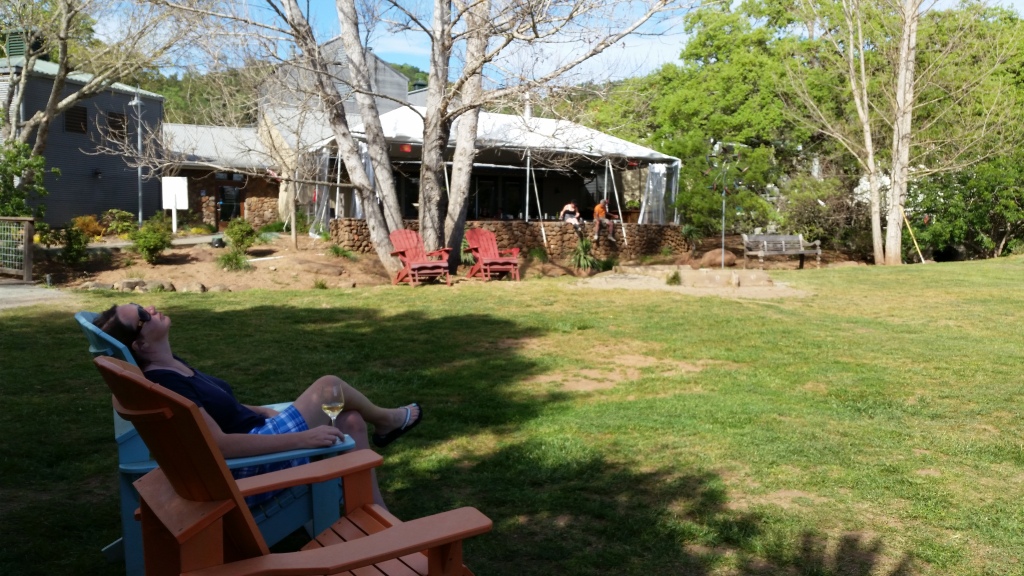 We had time to squeeze in one more winery, so we hightailed it to Benziger.  I really enjoyed their wines as well, especially their Pinot Noir and their Gewürztraminer.  In fact, I enjoyed them so much that I had a glass of Pinot Noir while at the vineyard and brought a bottle of the 2013 Gewürztraminer home. 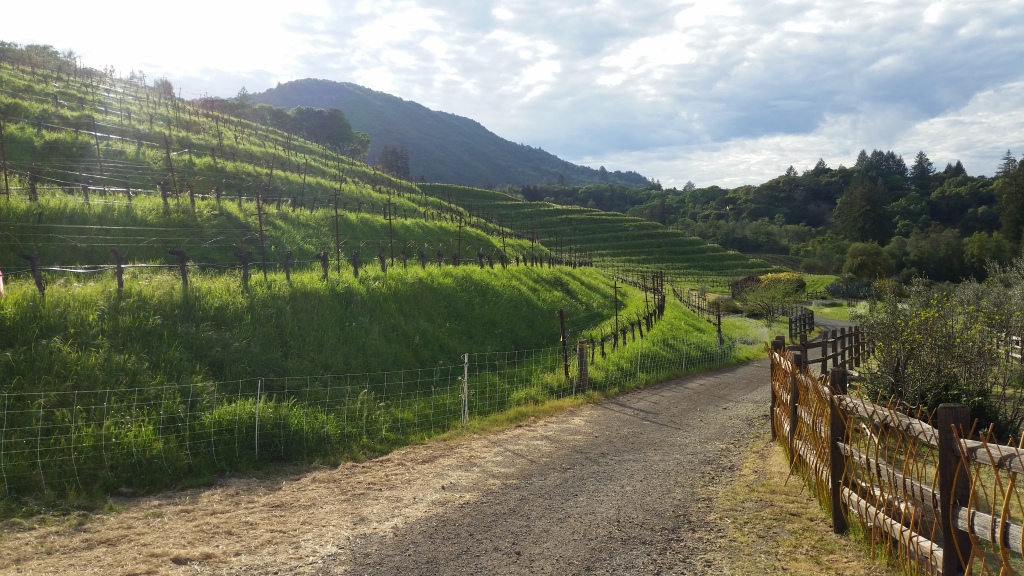 Chuck found us a great, little Indian restaurant so we loaded up on Indian food for dinner and headed back to our hotel.

The next morning, it was time to head to airport and head home.  After 4 nights away it was definitely good to be back home and with our kids again.  But I’m already dreaming of my return to wine country some day.