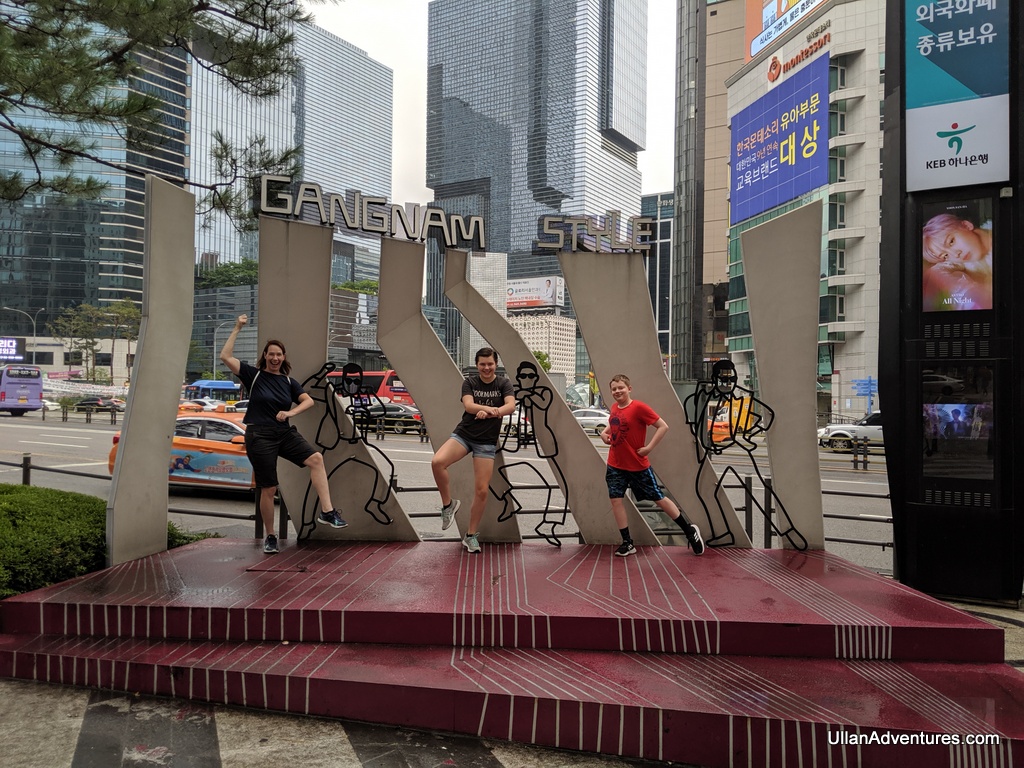 We arrived in Seoul after an exhausting, but fun 11 days in Japan.  After grabbing some snacks at the airport since we missed lunch and picking up our pocket wifi, we headed for our hotel to drop off our bags.  Normally we’d drop our bags and head out to explore, but this time we all chilled in the room for a bit before wandering around.

Our hotel was in Insadong which is one of the top tourist areas known for more traditional Korean shopping and food.  The hotel was a great choice as we had 3 bedrooms and 2 bathrooms, there was an included breakfast buffet which was awesome, plus we had a full kitchen and living area.  The location didn’t turn out to be the best choice for us though and I kind of think we would have had a better time somewhere else.

The pedestrian only streets around our hotel were neat, but after a brief stroll, we we’d seen all we wanted to see.  Plus the restaurant choices weren’t the best.  At this point, we were all so tired and hungry and honestly just needed some “normal for us” meals.  The first night, Chuck and I actually went to an Indian restaurant and then picked up some ramen and other food from a mini market for the kids’ dinner.

The next morning we went to Gyeongbokgung Palace.  After visiting there, we found a burger place on our walk back to the hotel and it really hit the spot.  Normally you can’t find a good burger outside of the US, but this place was pretty close and we were all able to get fed!

We then wandered around Insadong and found a stand making King’s Dessert.  This consists of taking a block of honey and rolling then stretching it into 16,000 strands which are then filled with nuts or chocolate.  The guy made a special batch for us and we took a bunch home to snack on the rest of the trip. 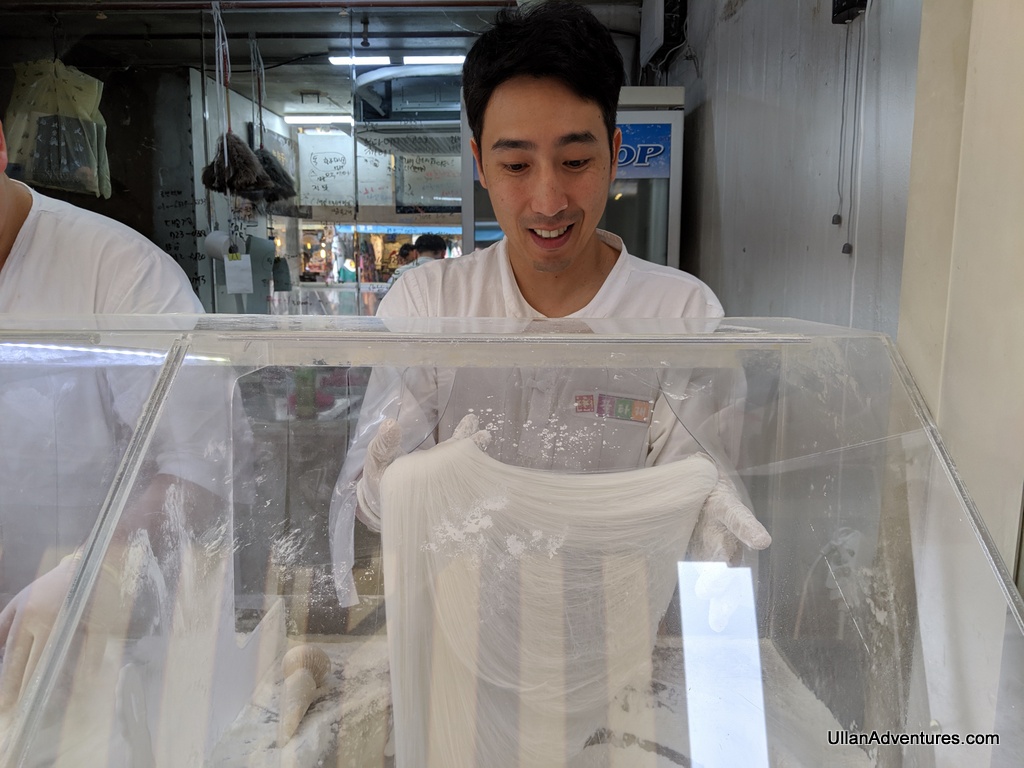 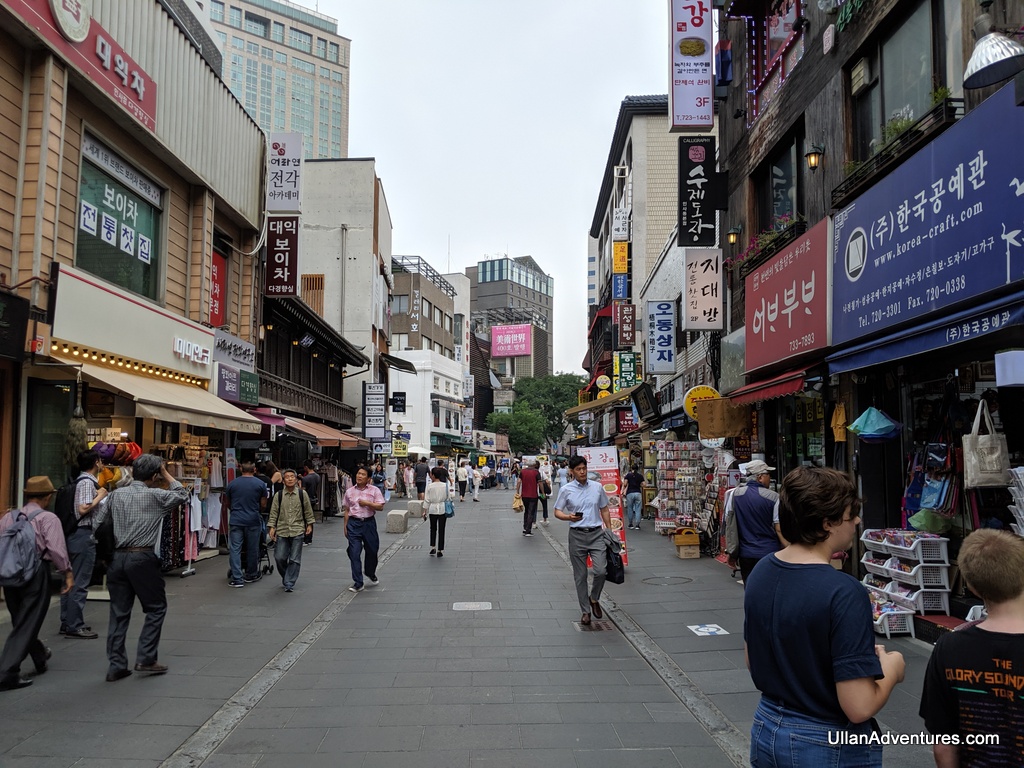 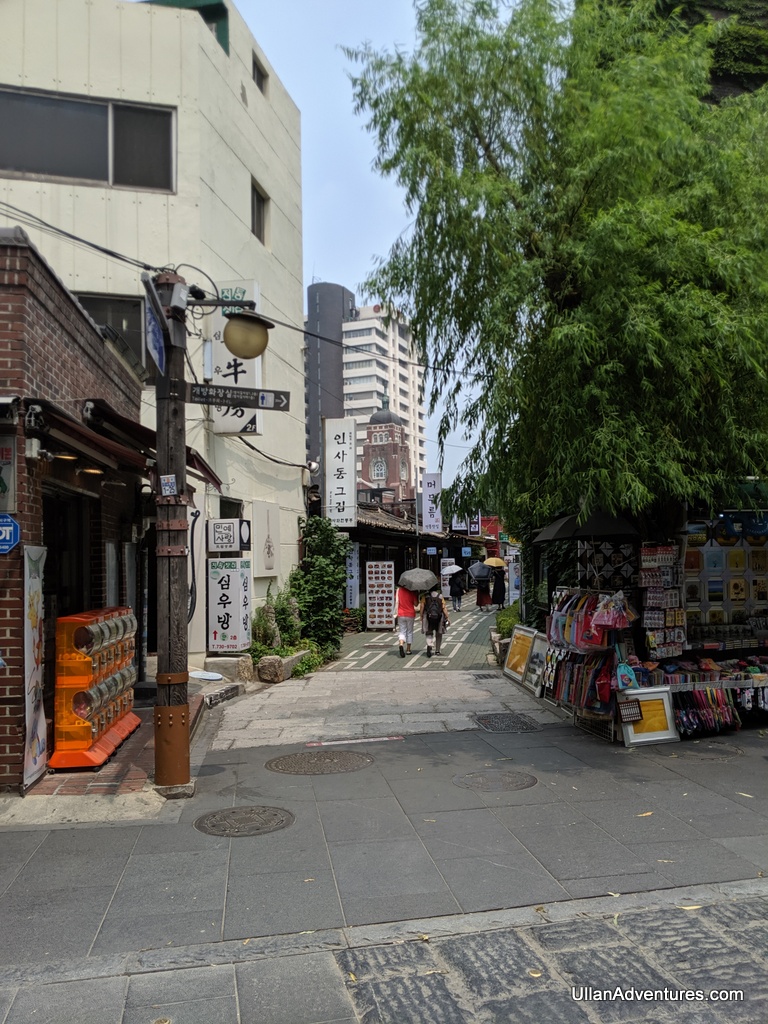 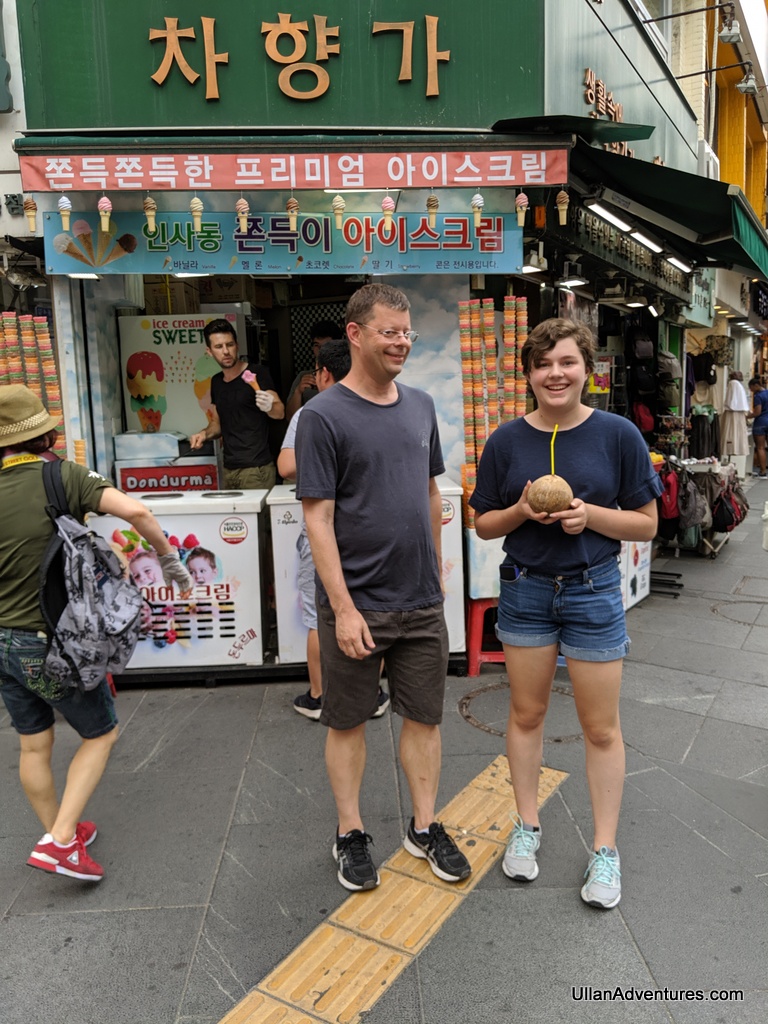 After a brief rest at the hotel, we took the subway to a different area of Seoul for our Korean Dessert making class.  There didn’t look to be a good place for dinner near the class, so we took the subway back to our hotel and then walked a good 15 minutes to the Myeong-dong night market to hunt for dinner.  We love night markets and had a great time exploring the market and trying the food. 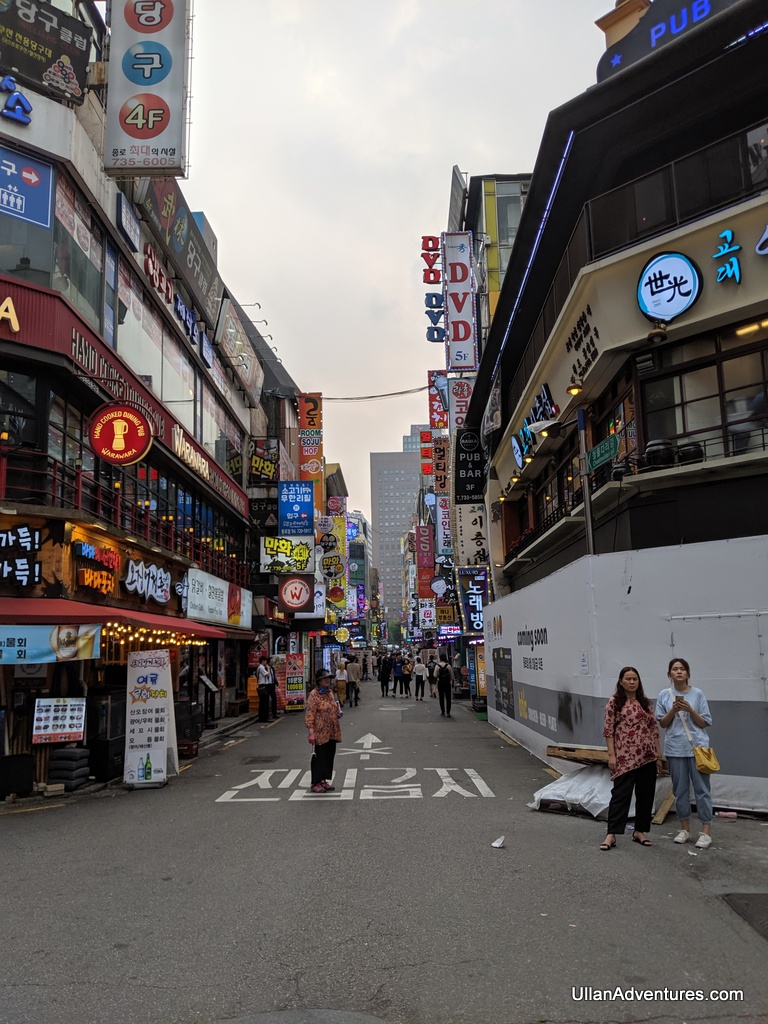 Area between our hotel and the Myeong-dong night market 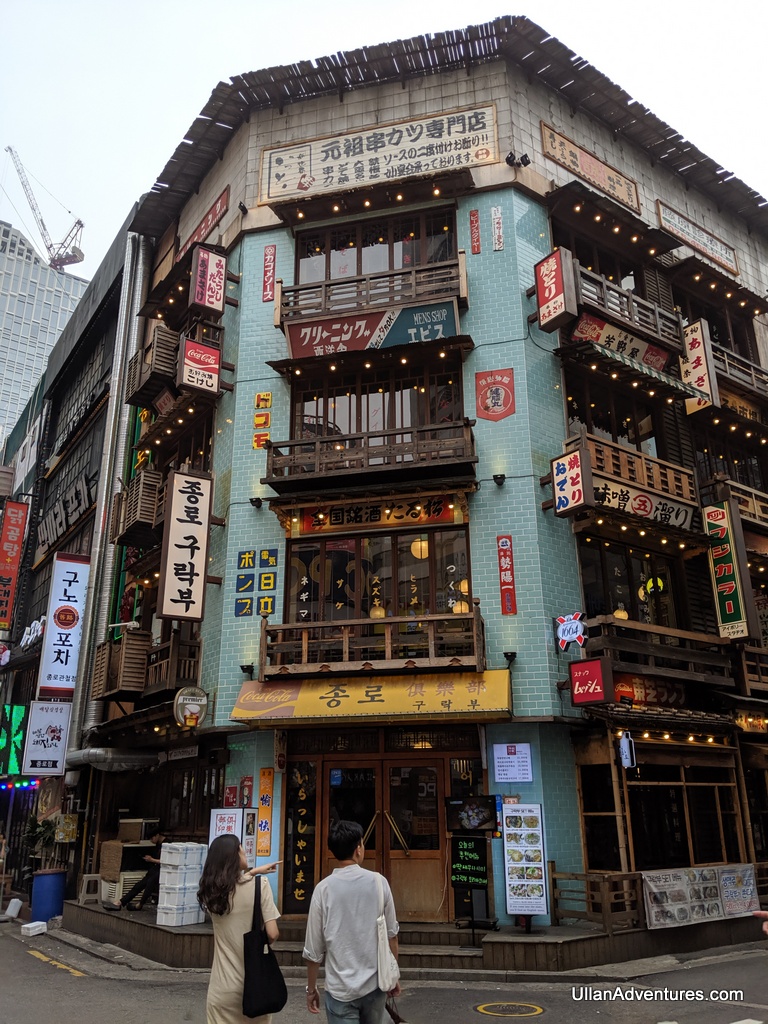 Day 2 started with us visiting the Bukchon Hanok Village which is a traditional Korean village.  I’d seen this on travel shows and it looked so cool.  And it was cool, but… not as amazing as I was hoping!?!?  It may have been the heat, so  while we enjoyed seeing it, I wasn’t as blown away as I expected.  That said, I’m really glad we went. 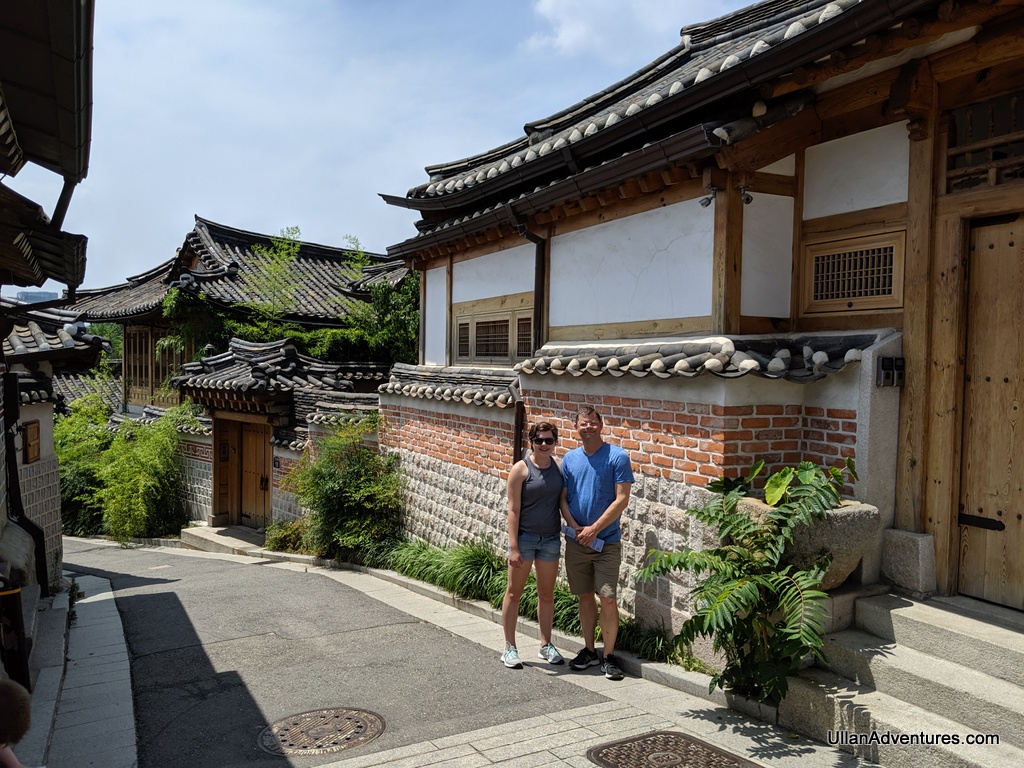 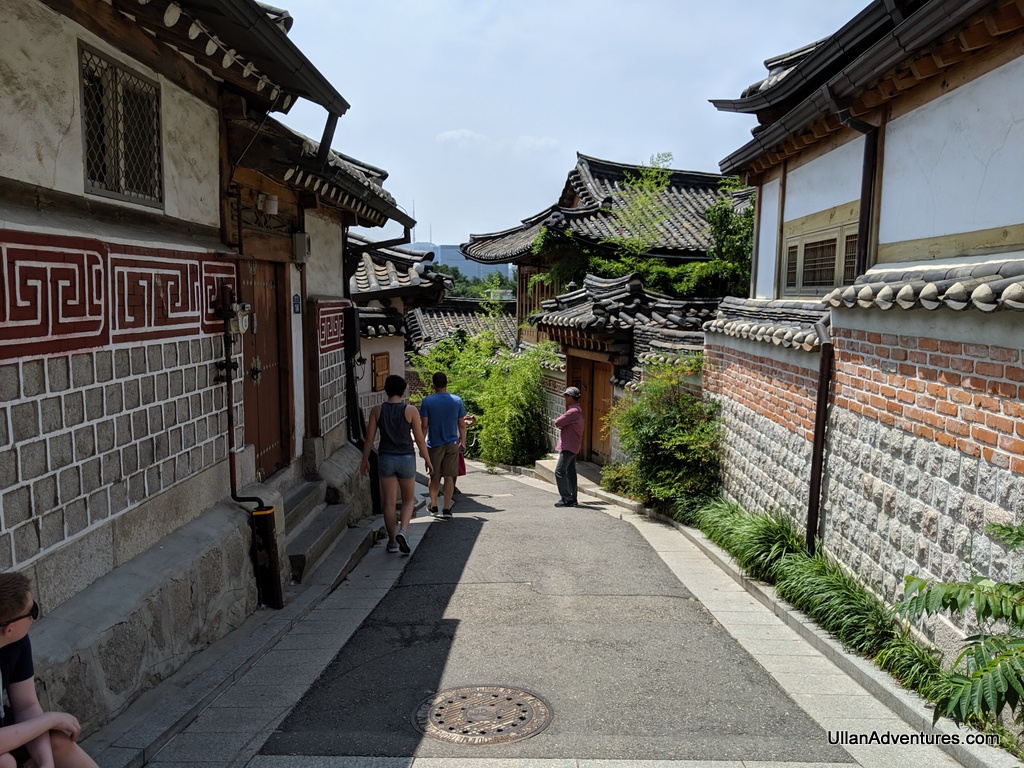 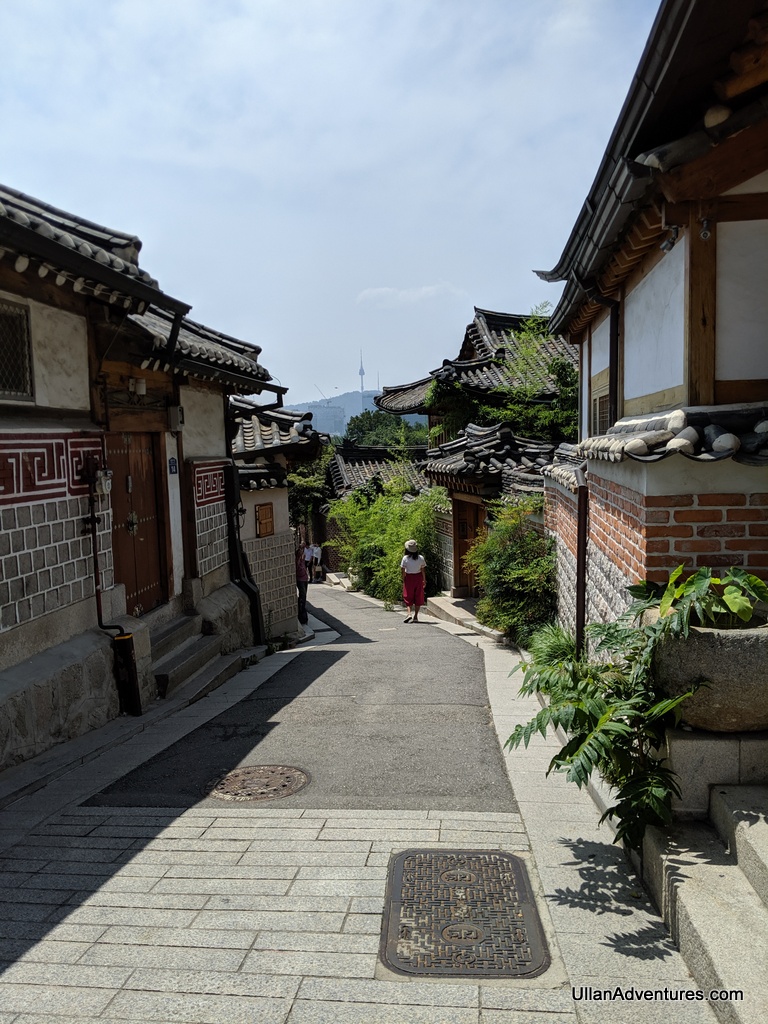 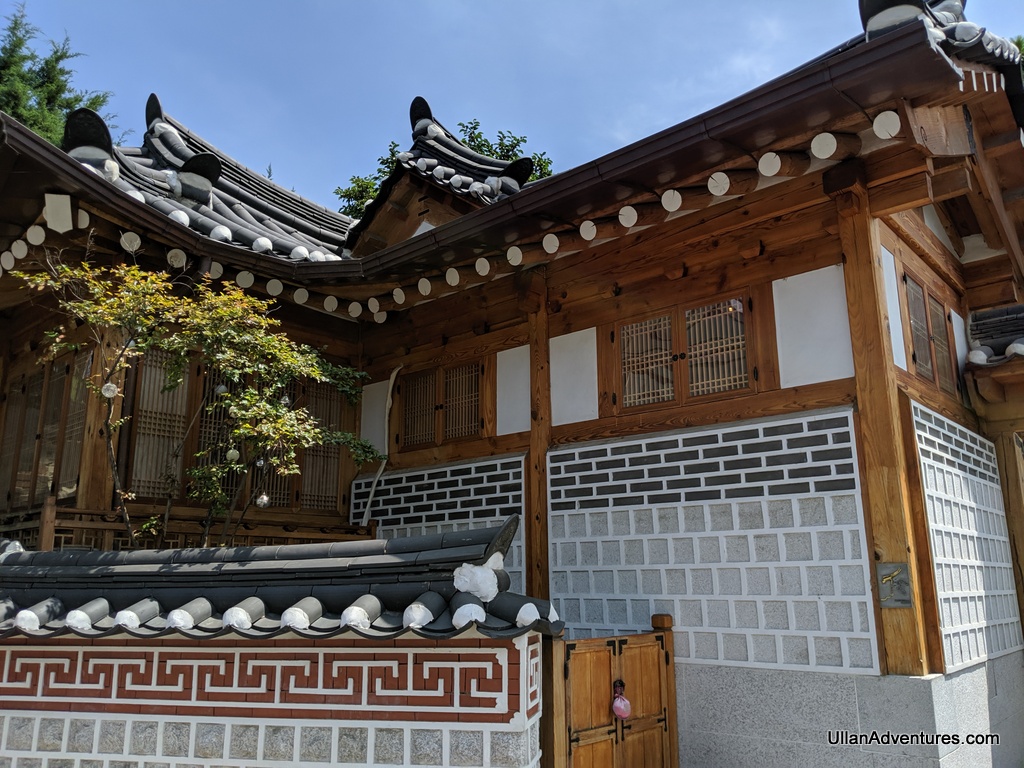 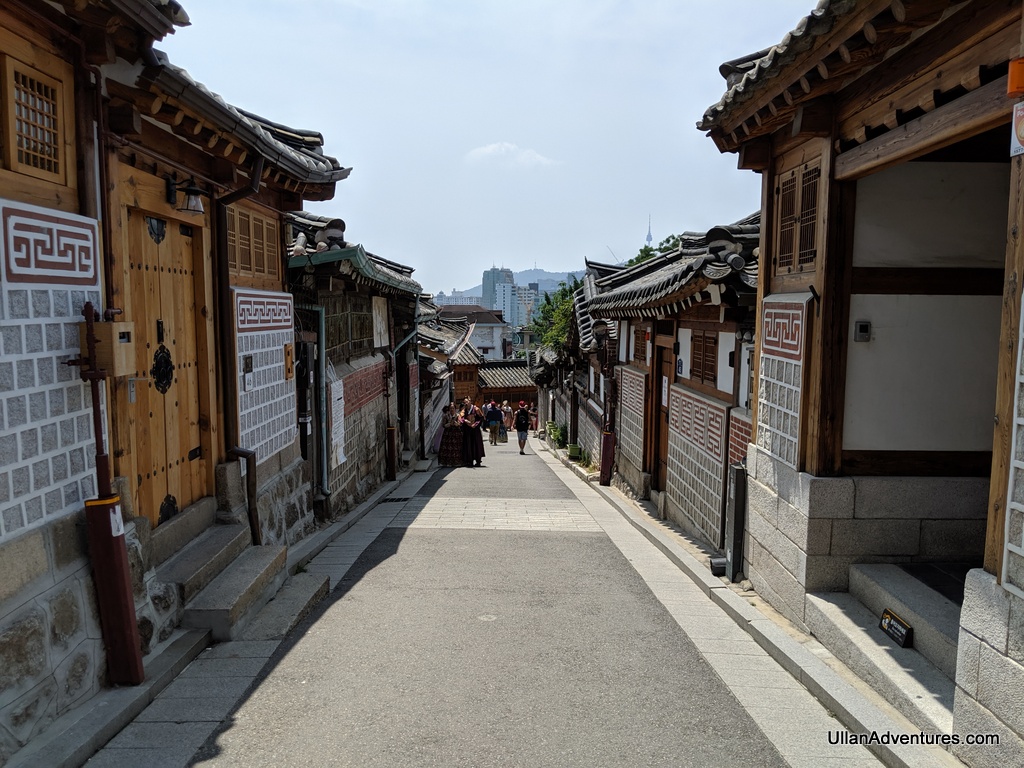 We had lunch at the same burger place from the day before then wandered around Insadong some more, mostly on the hunt for treats.  I ended up picking up some Starbucks and discovered the best Starbucks drink I’ve ever had although I can’t remember specifically what it was now.  I was hoping the drink would come to the US, but sadly it hasn’t yet.  I loved the drink so much, that I ended up getting one most of the remaining days in South Korea. 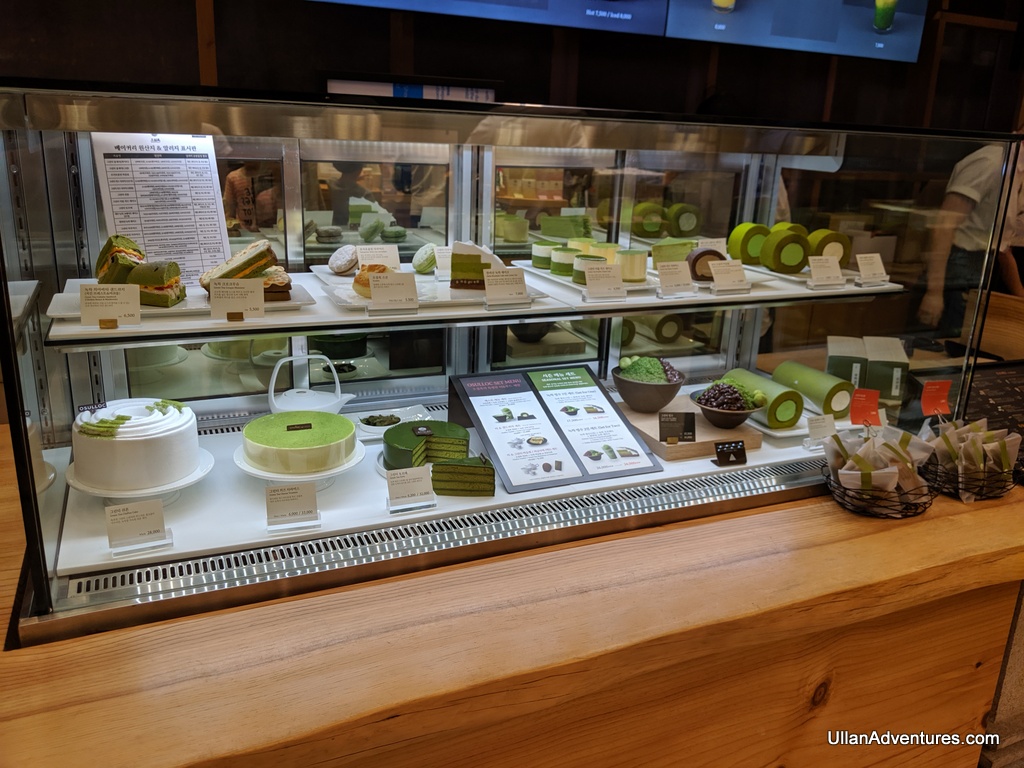 We had plans to visit another section of Seoul, but we scrapped them for some relaxing time at the hotel.

That evening, we revisited Myeong-dong for a traditional Korean BBQ meal then strolling around the night market again.

Day 3 had us waking early for our long day of visiting the DMZ & North Korea.

The day was incredible, but tiring so we had dinner at a Mexican restaurant about 10 minutes from our place then crashed for the night.

Day 4 was our last full day in Korea and there was still so much we hadn’t done.  First up was going to Gangnam.  Beckett has always LOVED that song, so we had to go to the area to check it out.  We found the one stage and proceeded to dance to the song and take pictures like total tourists. 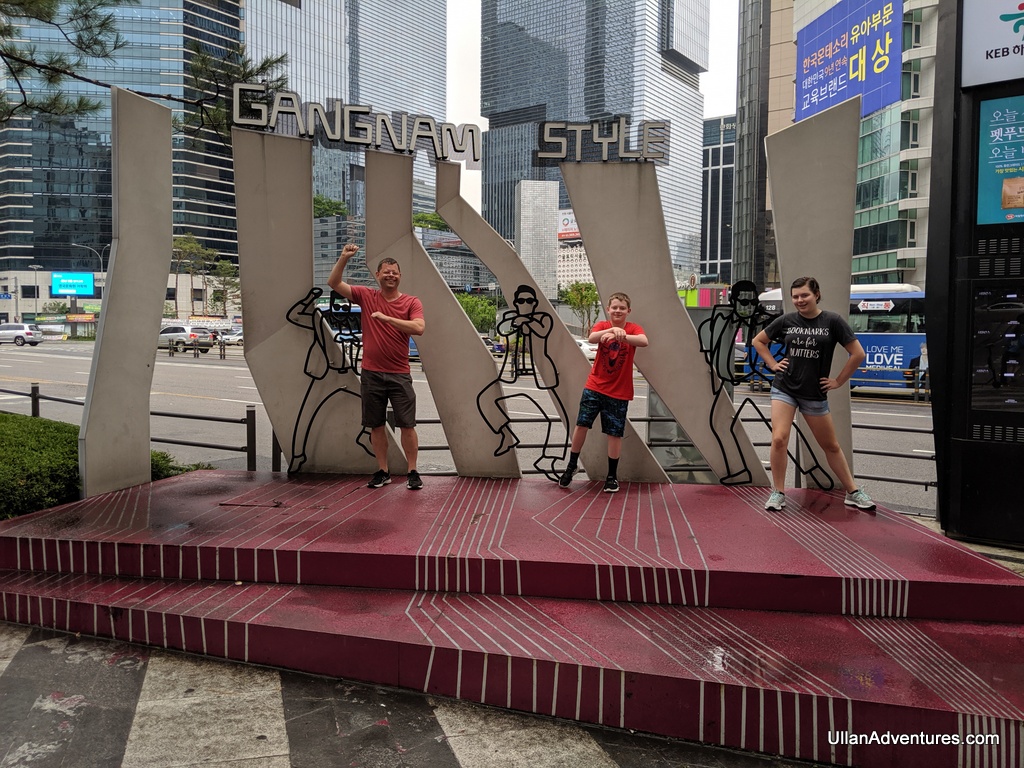 We never found the other stage – it turned out to be far away – and then found a Japanese shabu shabu meal for lunch.  Yes, despite eating so many shabu shabu meals in Japan, we were back for another one! 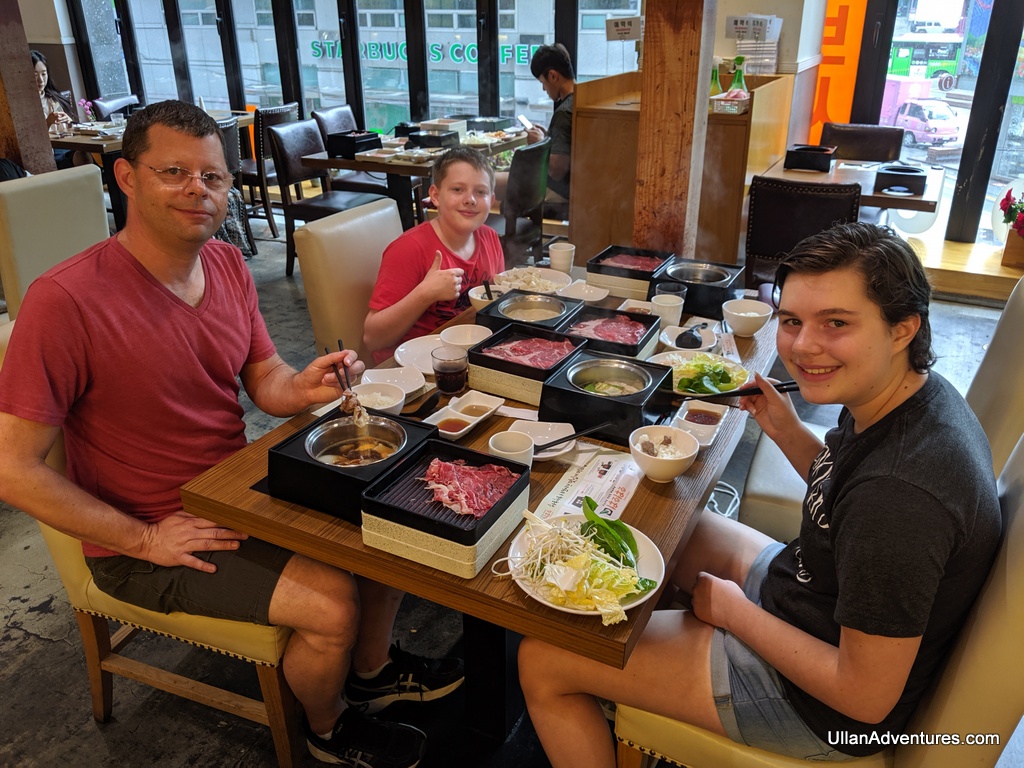 Gangnam was overall pretty disappointing, so after walking a few blocks, we hailed a taxi and headed for the Siloam spa, which features several different hot, cold, and mineral rooms.  There were some cool buildings there though. 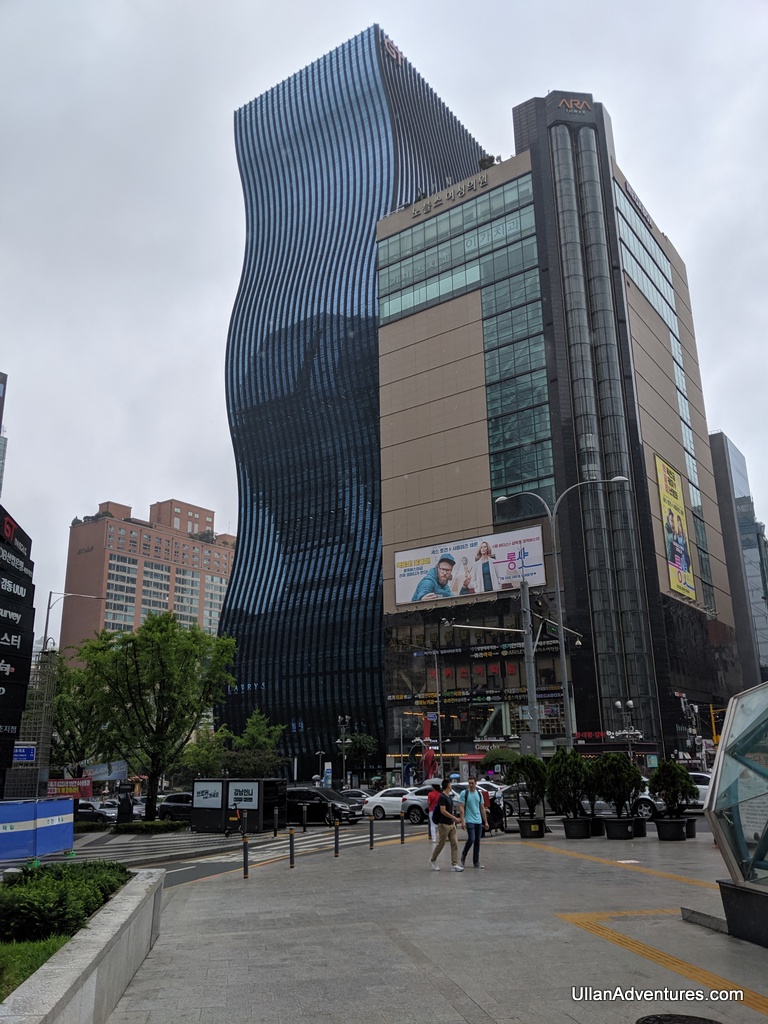 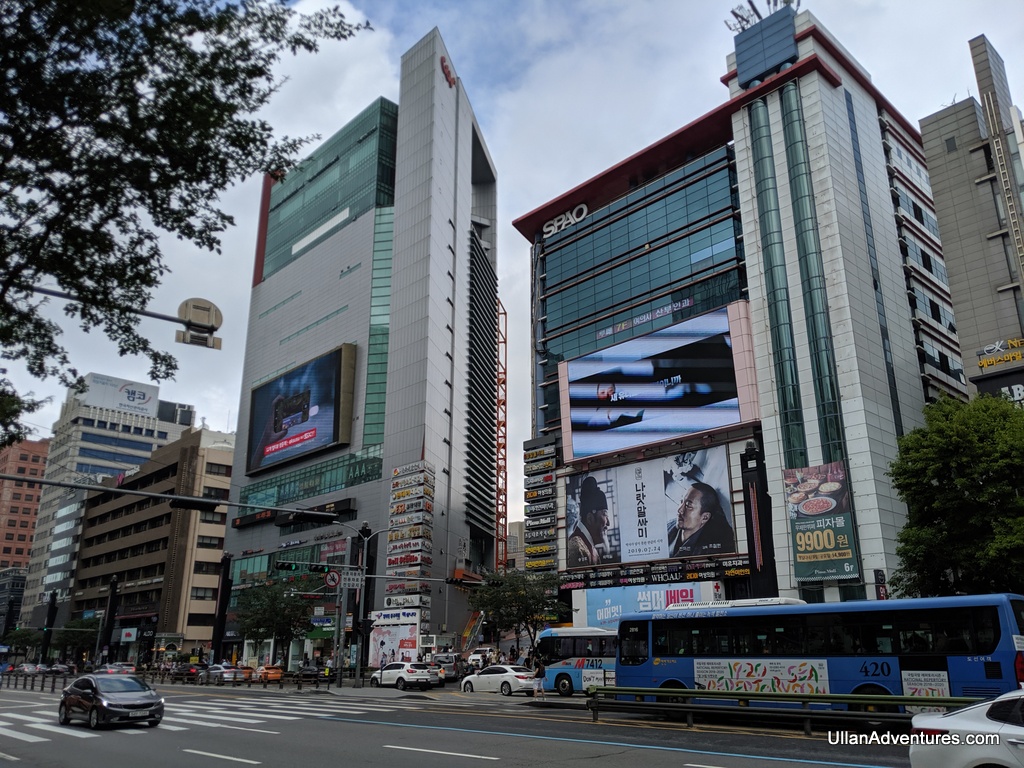 We had a really nice time relaxing at the spa before heading back to the hotel to pack up.

Fun in the back of a taxi

For dinner, we walked a gazillion miles to a pizza place and after a really long wait, we were treated to pretty authentic NY style pizza that totally hit the spot!

Day 5 had us leaving South Korea and starting our long journey home. 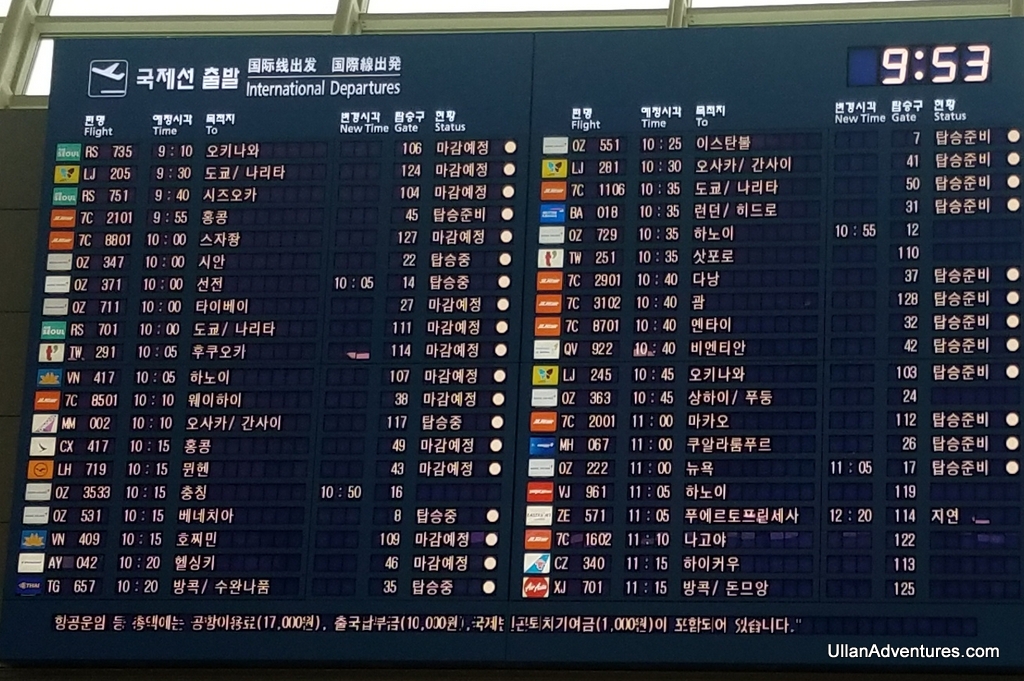 Departures Board at Incheon airport 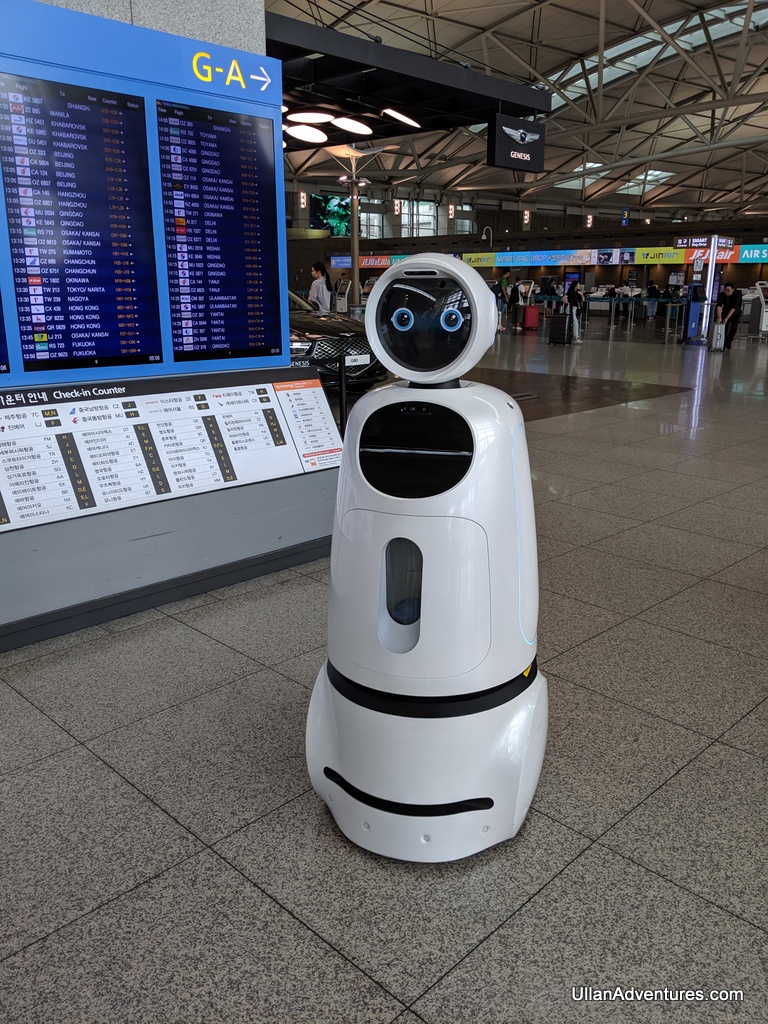 Cool robot at the airport

All in all, I enjoyed our time in South Korea, but I have many mixed feelings.  I didn’t love Seoul as much as I expected, but I didn’t hate it either.  There were so many things I had planned that we didn’t do from going up the top of Lotte World Tower, one of the world’s tallest buildings that has a glass floor on top, to visiting Lotte World, the world’s biggest indoor amusement park, to visiting other markets and sites.  But we were so exhausted that we couldn’t have fit in one more thing.  Plus finding food for all of us was far more challenging than I expected.

That said, visiting the DMZ was an absolute highlight of my travels and we got to see and experience many cool things so it was definitely worth going.