A Magical Sunset Drive in Kruger 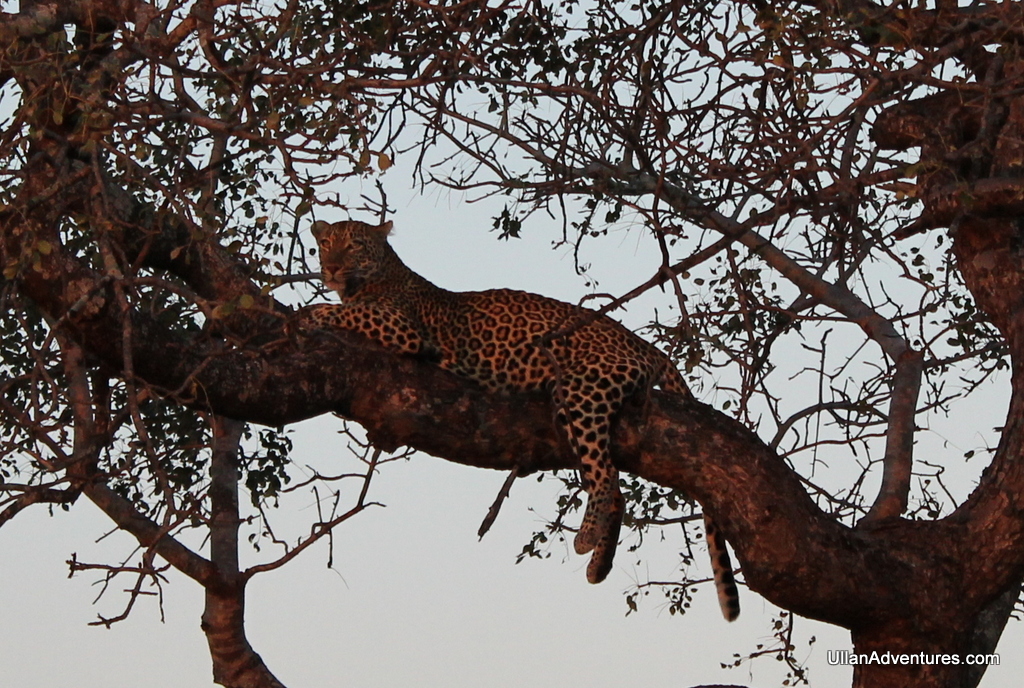 Leopard in a tree

On our last full day in Kruger, Beckett kept saying that he wanted to do a guided sunset drive.  We were surprised as we’d spent so many hours in the car hunting for animals already.  I think he partly wanted to see a bushbaby, but he also said he wanted to see more animals.  So he and I signed up for it through the camp while Chuck and Mara stayed back to have an African braai.  The drive only cost us about $30 for the 2 of us, and I have to say it was the best $$ I’ve spent in a long time.  We LUCKED OUT and had the most amazing drive of pretty much our entire trip!!

We left at 4pm and quickly saw elephants, a klipspringer, duiker, zebra, giraffe, wildebeest, impala, and more.  Some in our game vehicle were probably new to the park as they were so excited about seeing each of these and kept asking to stop.  Our guide would stop briefly, but kept telling us that he had news of an animal sighting he was in a hurry to get us to.  He didn’t say which animal, but we knew it would be good. 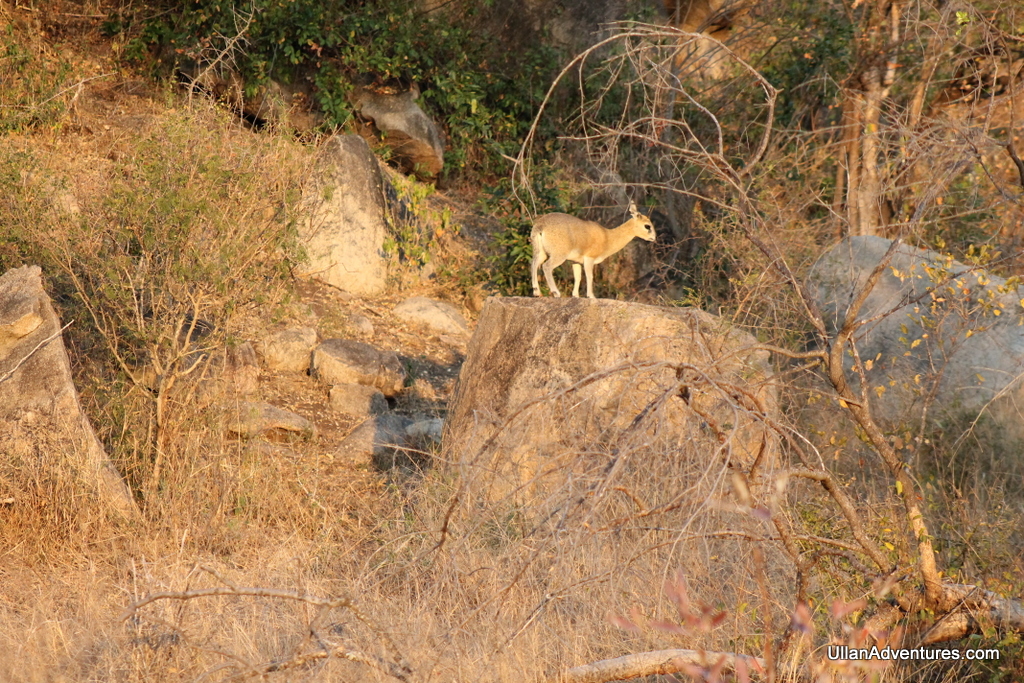 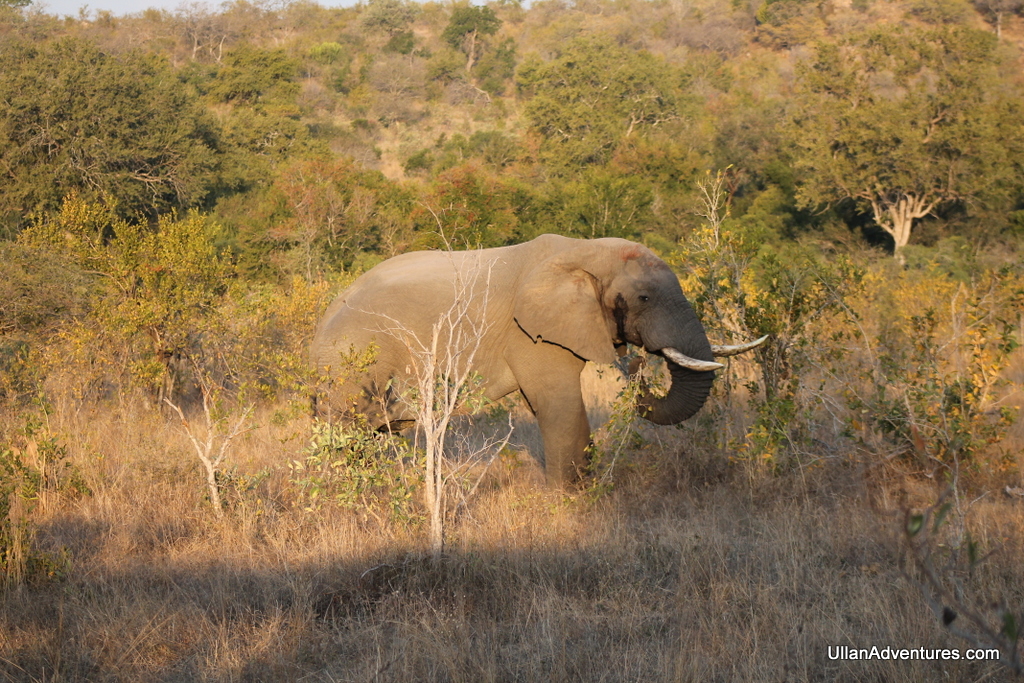 Eventually we came up a hill and there she was: the most incredible leopard lounging in a tree!  I couldn’t believe it!  She is seriously one of the most beautiful animals I’ve ever seen!  We pulled off next to the tree and sat there for a good 10 minutes taking pictures and watching her.  And with the binoculars, we got close up views of her.  After a bit, she stood up, stretched, then settled down for a nap on another branch.  AMAZING! 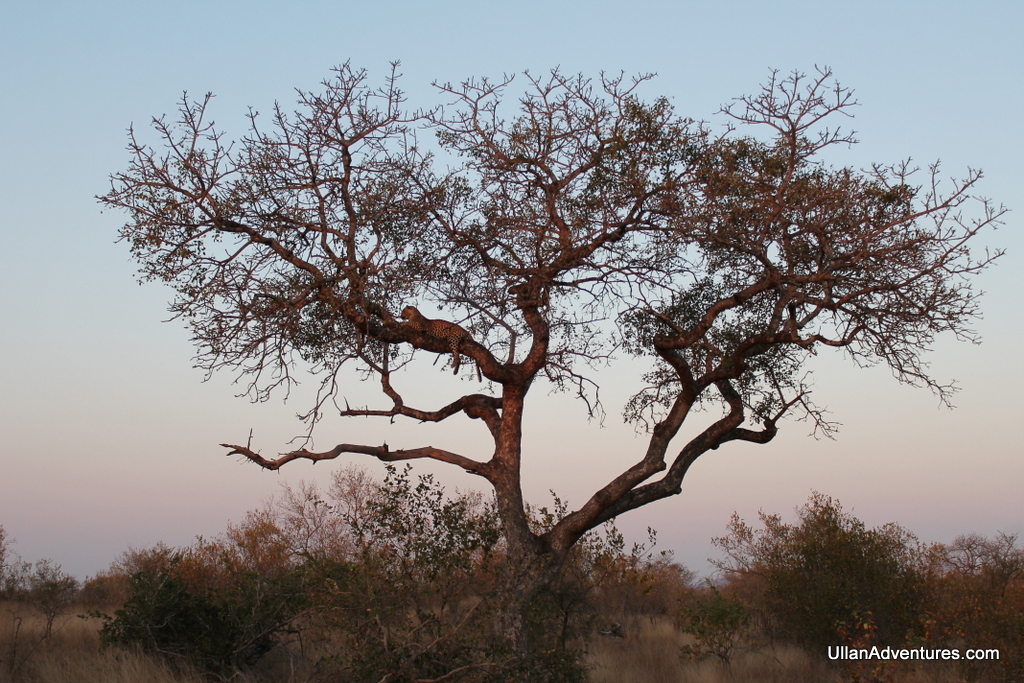 Leopard in a tree 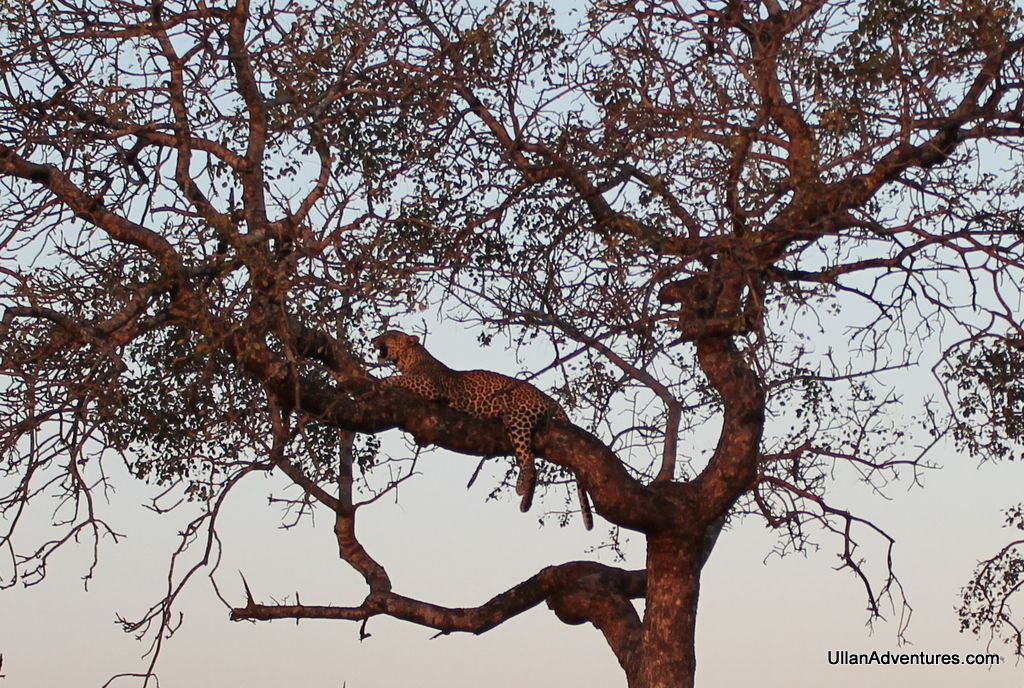 She is so amazing! 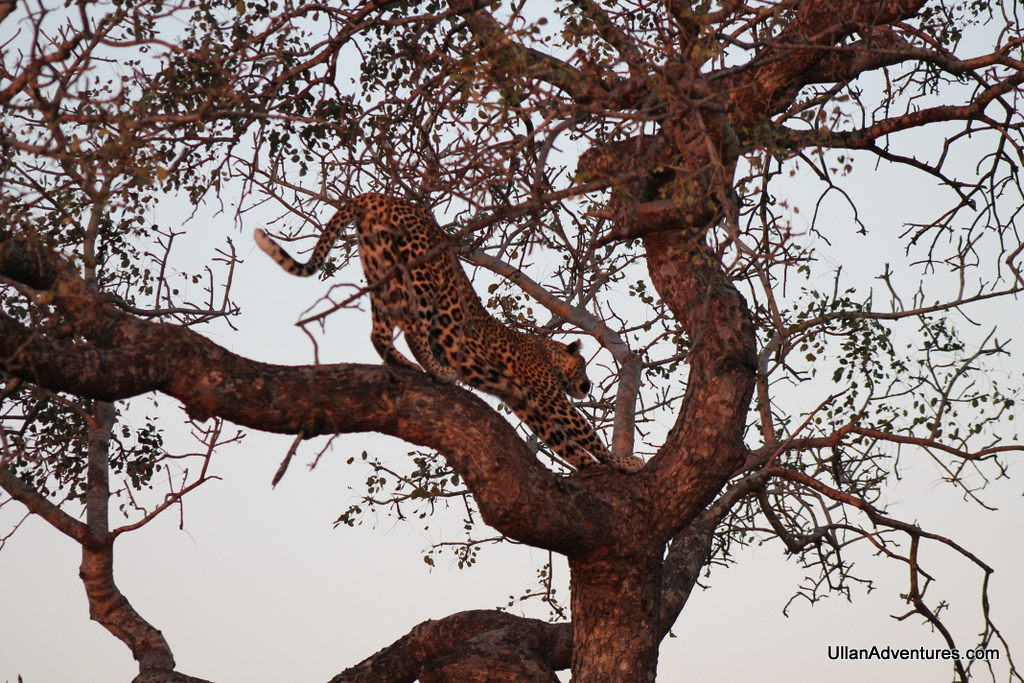 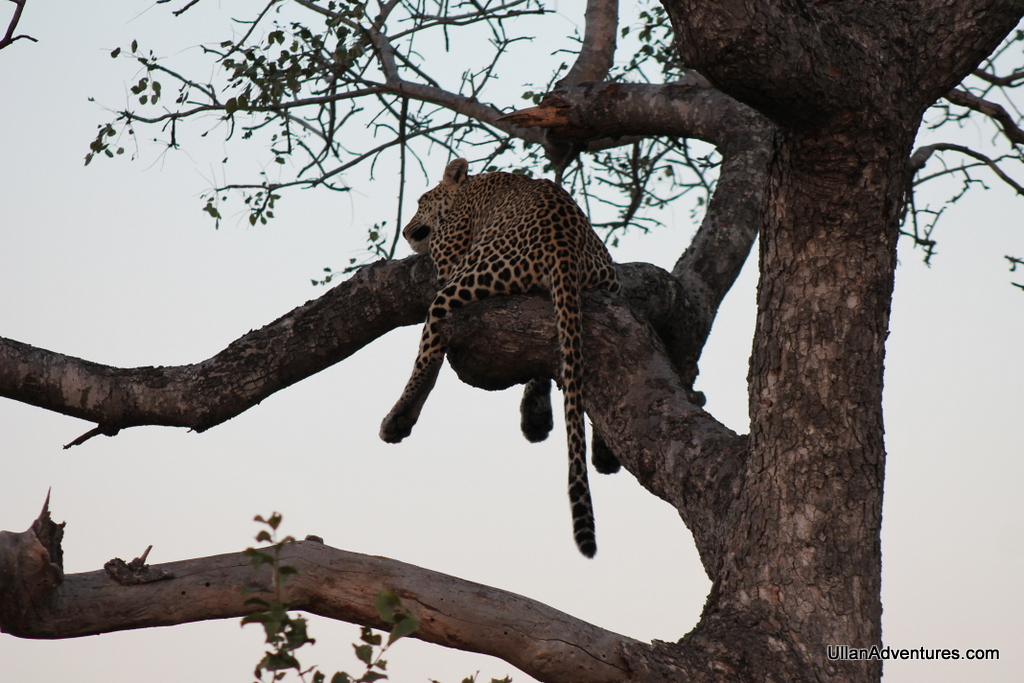 Rear paws dangling as she naps 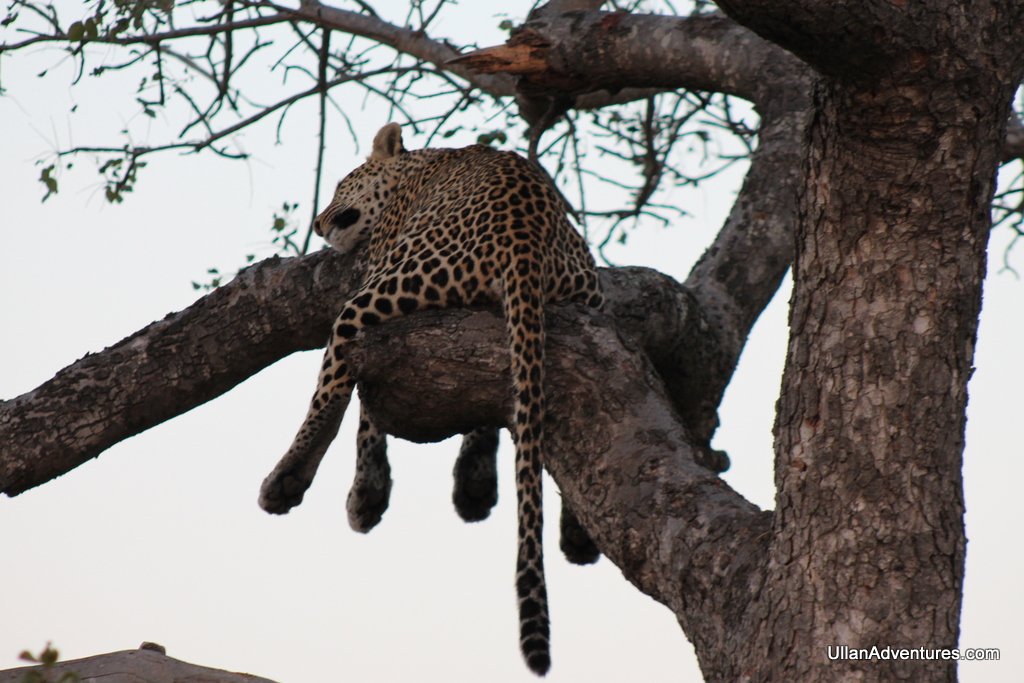 Loved seeing all 4 paws dangle as she napped!

After leaving her, we saw 2 White Rhinos grazing nearby. 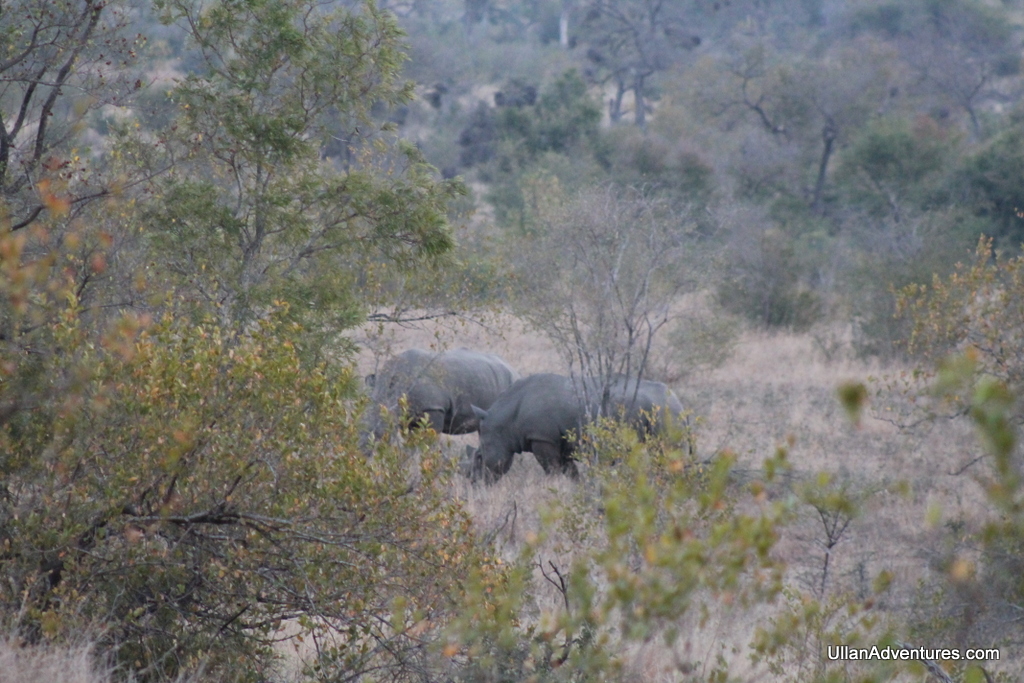 Then we saw an African wildcat.  He looked like a house cat!

At this point, the sun was setting so we transitioned into a dusk drive.  After a bit, we came upon a den of hyenas.  The den was right beside the road and the pups sat there looking at us before running in and out of their den and around their mom.  The pups were at points maybe 7′ from our game vehicle!  They were adorable! 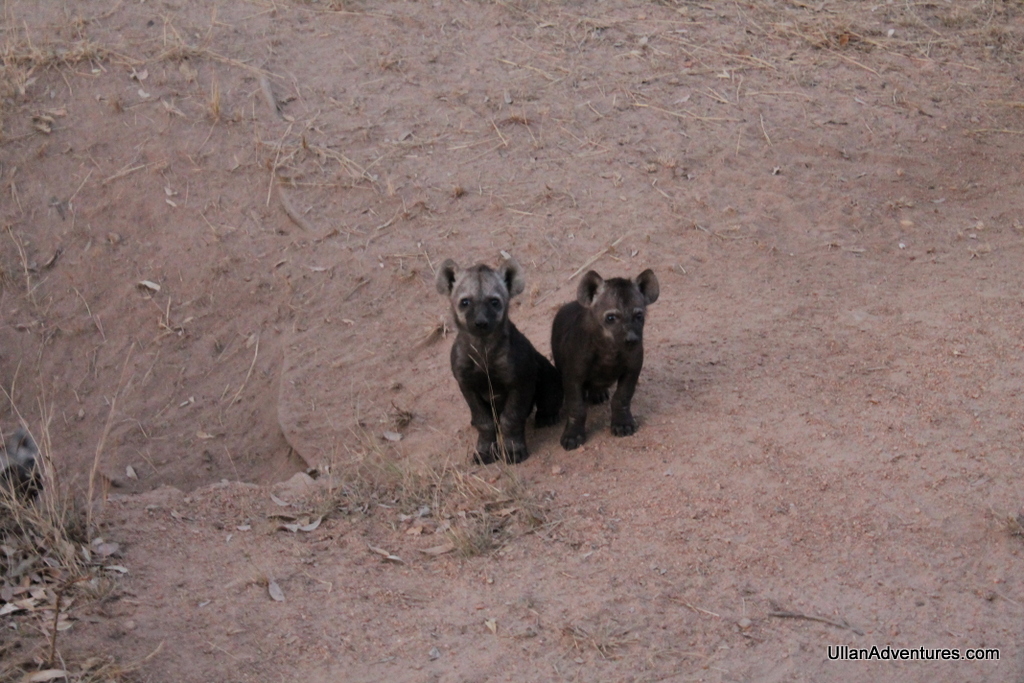 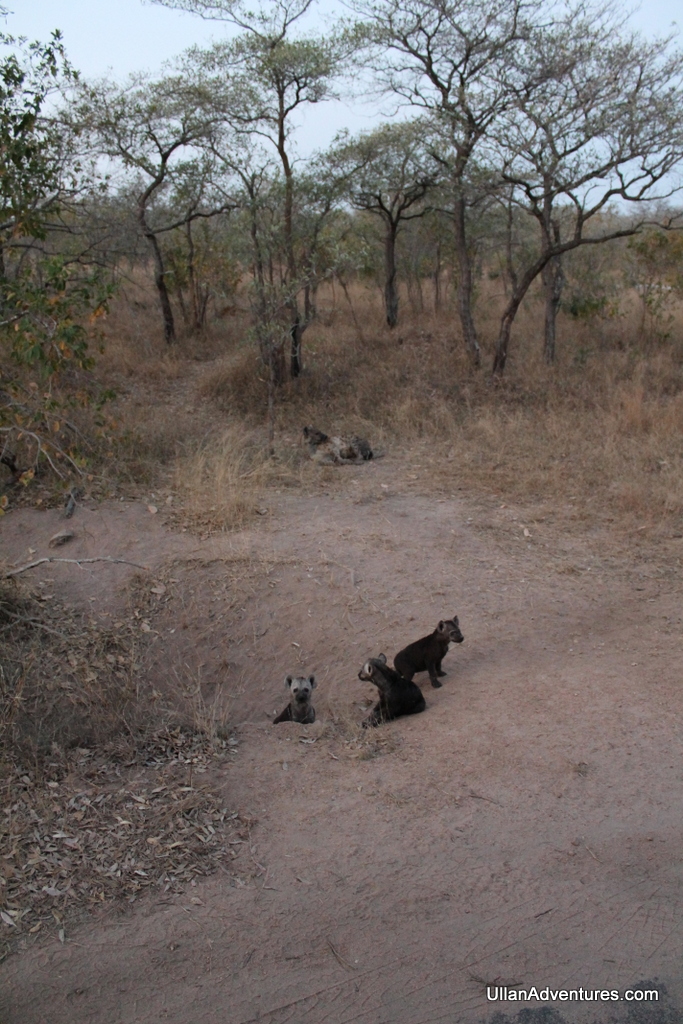 3 Hyena pups and their mom

The sky then turned dark and we got out the search lights to scan the darkness.  We found a white tailed mongoose, African wildcat, and Beckett found a scrub hare.

One of the guys on our game drive knew about a lion kill next to the road near camp, so the guide drove us there.  And we were treated to watching a male lion feast on a buffalo kill.  It was pitch black and we only had search lights to watch him.  My pictures barely came out, but still gives you an idea what we saw.  Eventually he got up and walked away and we saw a female lion laying there.  The way the lion looked at us before he left, Beckett and I were worried he was going to walk out of the bush in front of the game vehicle and attack us.

I navigated us back to the spot the next morning so Chuck and Mara could see, but the lion and carcass were gone. 🙁 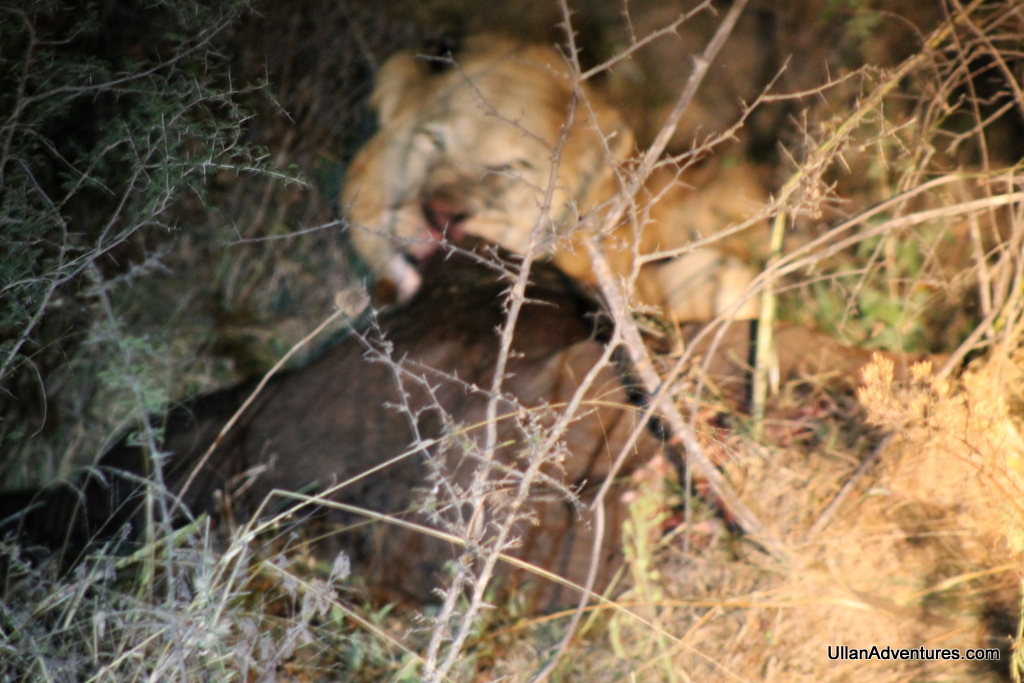 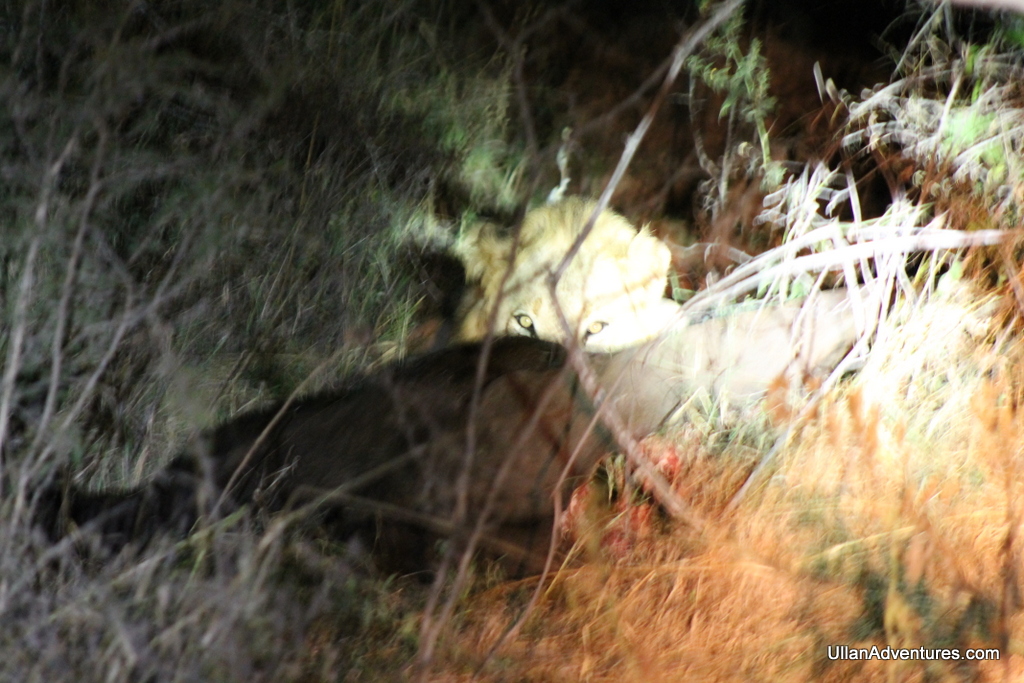 We got back to camp a bit after 7pm absolutely giddy by what we’d seen.  I thought we’d see a few things, but cannot believe our good luck at seeing a leopard, a lion with a kill, rhinos, and 4 other new animals.  This 3 hour drive was another highlight of our trip and something I won’t ever forget.  Beckett says seeing the leopard was the highlight of his entire time in Kruger as well.