After our amazing first day in Kruger, we still had 4 more full days in the park plus the morning of leaving the park.  And what an incredible few days those turned out to be as well.

The morning of day 2, I woke at the crack of dawn and went down to the restaurant deck to see if I could catch any early morning predators.  I didn’t see much except a mama and baby hippo and some kudu grazing near the restaurant. 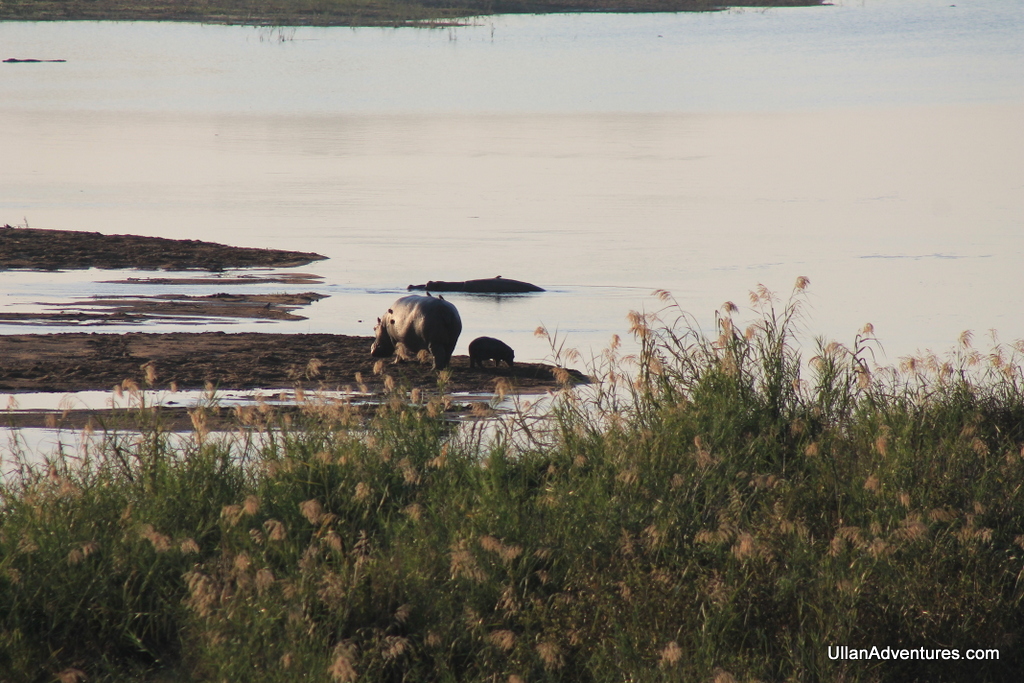 Mama and baby hippo and a 3rd hippo in the water 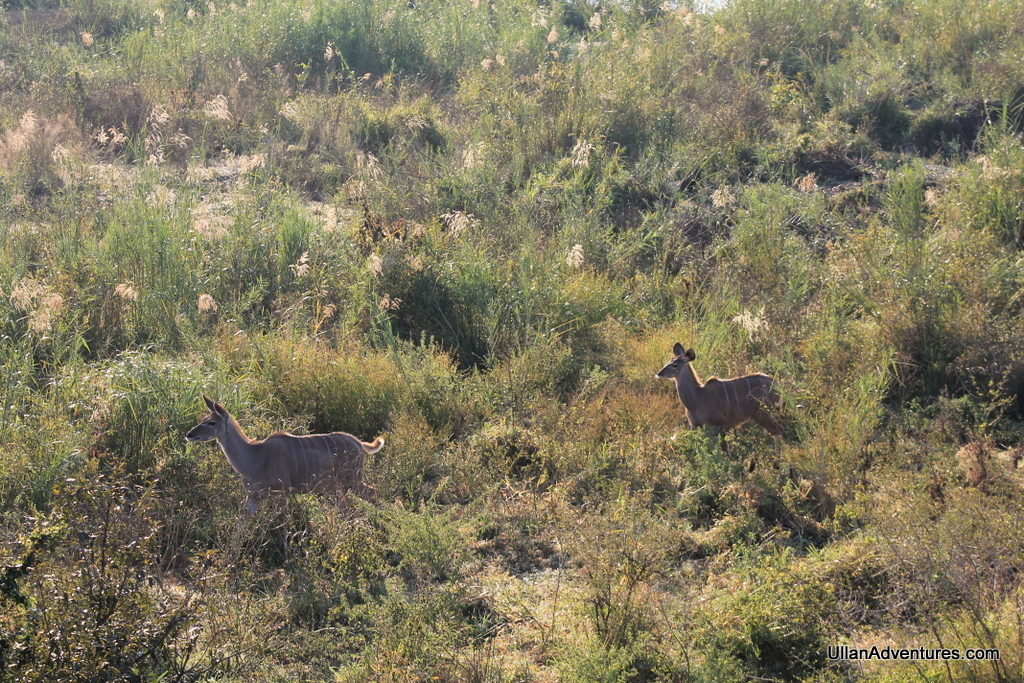 After breakfast, we checked out of Lower Sabie camp and headed to Satara camp.  The two camps are 93km apart and the trip was expected to take 3:45.  It took us about 5+ hours, but that included a stop at Tshokwane picnic spot for an unusual lunch.  Along the way we saw more giraffe, buffalo, zebra, wildebeest, impala, warthog, and elephants. 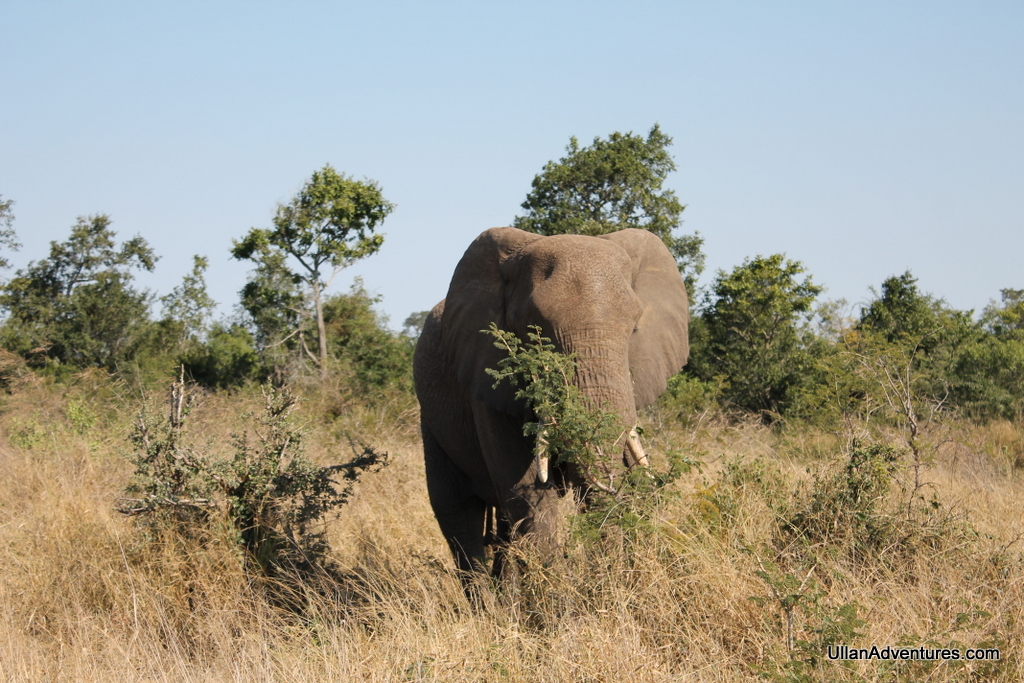 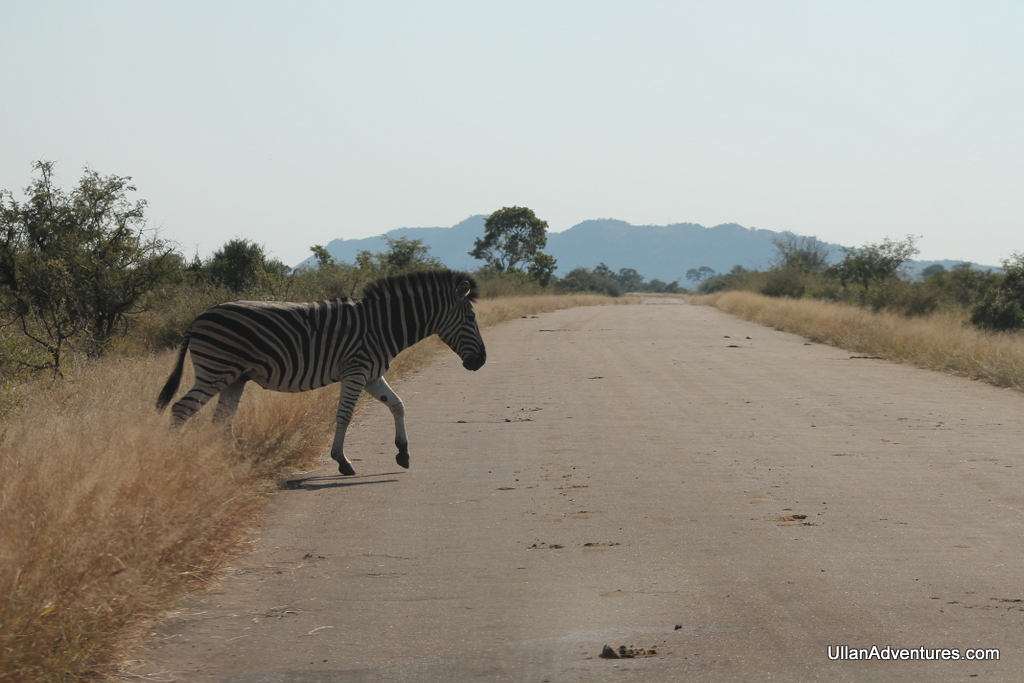 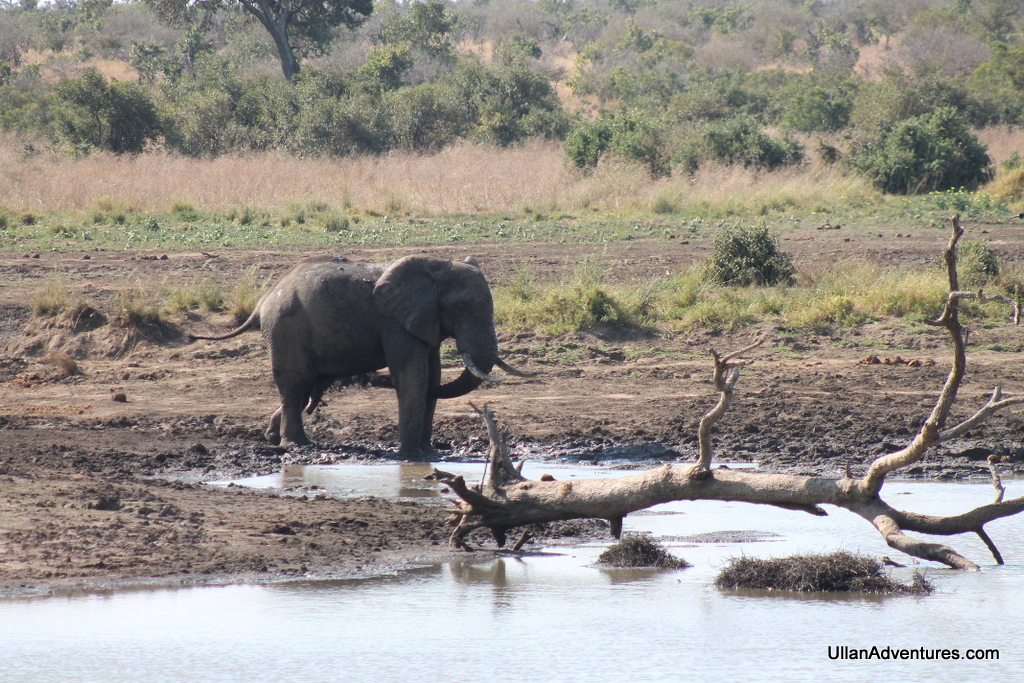 Elephant spraying himself with mud

We also saw a few new animals such as ostriches (that were fighting), vervet monkeys at the picnic spot, and baboons running along the road. 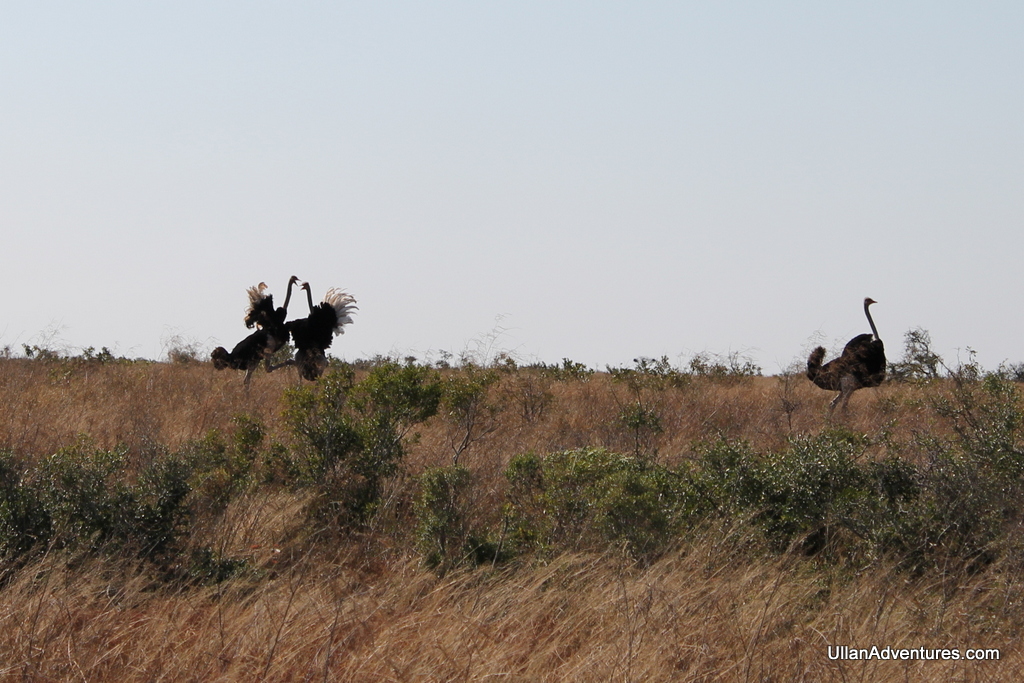 Our trip also took a little longer because we had an elephant in the road that wouldn’t move.  An oncoming car tried to go around him, but the elephant promptly put a stop to that and made them back up, so we had to wait for him to move on. 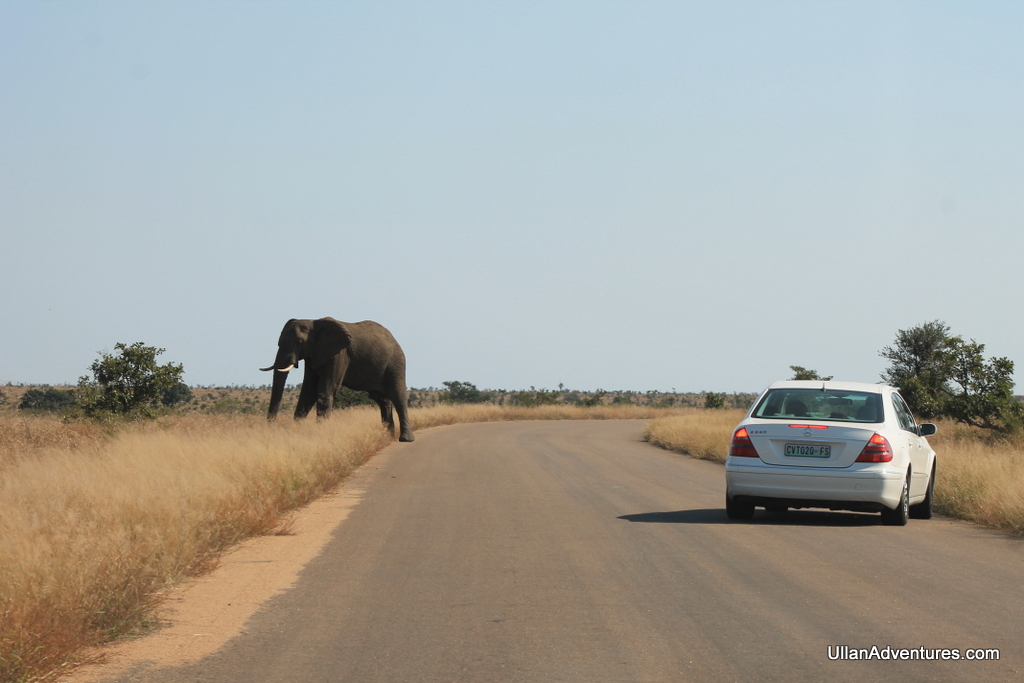 Elephant in the road. Nope, not going to try to go past him!

We also made a pit stop at Nkumbe hill lookout for a great view of Kruger.  The landscape was very different here from what we’d seen in Lower Sabie.

Once at Satara camp, we laid low the rest of the day.  We still got to see impala, kudu, a tree squirrel, and baboons at camp.  There was also a snake at camp, but we’re not going to talk about that. 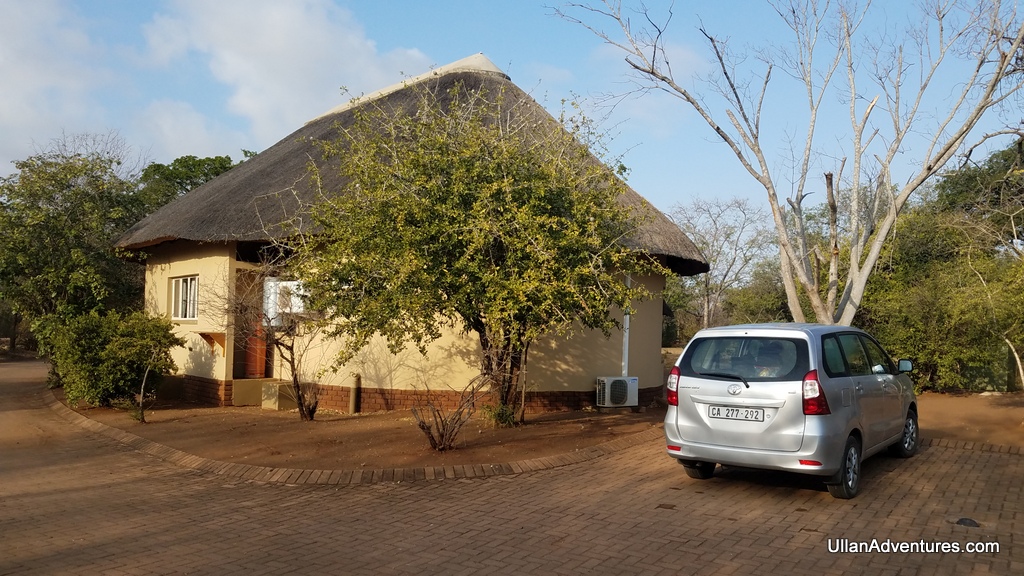 Our hut at Satara and our rental car

Day 3 was supposed to be a low-key day without anything scheduled except a guided night drive and doing some laundry.  We woke at the crack of dawn anyway to try to see some predators (they hunt in the early mornings and late in the day).  We were out for about an hour before we stumbled upon some Southern Ground Hornbills.  We only knew what they were because we’d seen signs about them being endangered and to report them for tracking if you see them, which we did.  It was really cool to see something endangered and “rare”.

We also had some good viewing of the usual animals including a giraffe walking across the road.  In fact, I could do an entire blog post of all the animals we had to stop to let cross the road.

Giraffe in the road

We were giving up and heading back to camp for breakfast when we spotted a lion walking in the road.  He eventually stopped and looked at us for a while before lying down.  He was amazing to watch!  We saw him licking himself, but my favorite part was watching him turn towards the breeze, close his eyes, and enjoy the breeze.  With our binoculars we got close up views of him too.  Eventually he got up and walked into the bush and within about 15′ he was gone from view.  What an incredible experience. 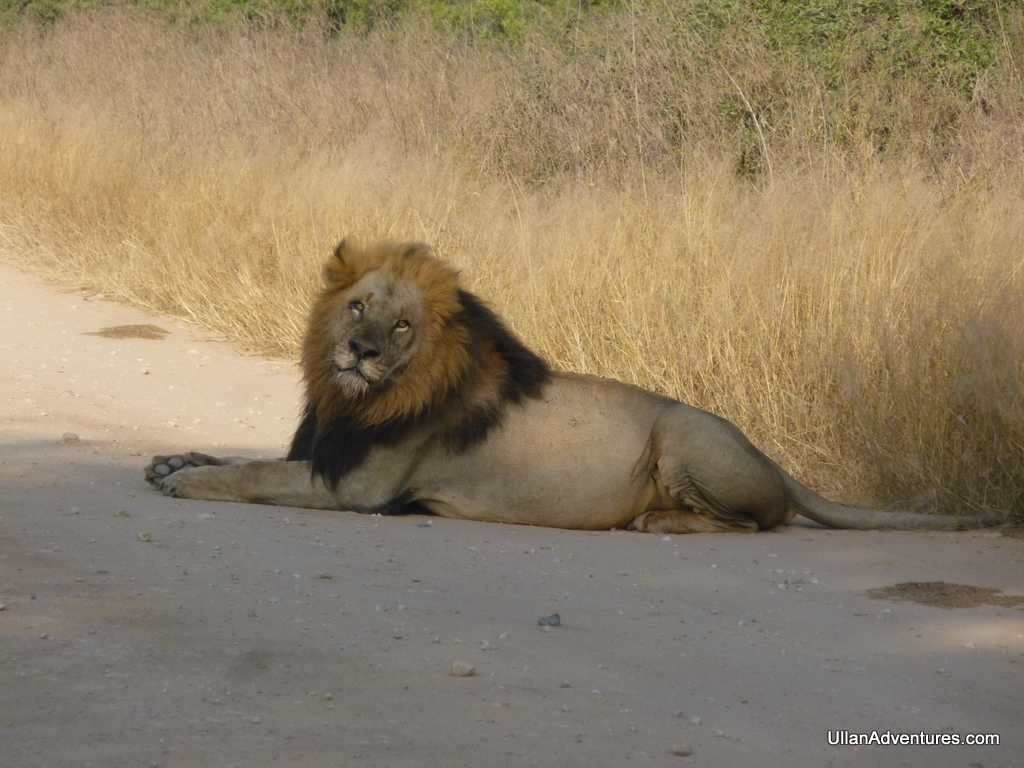 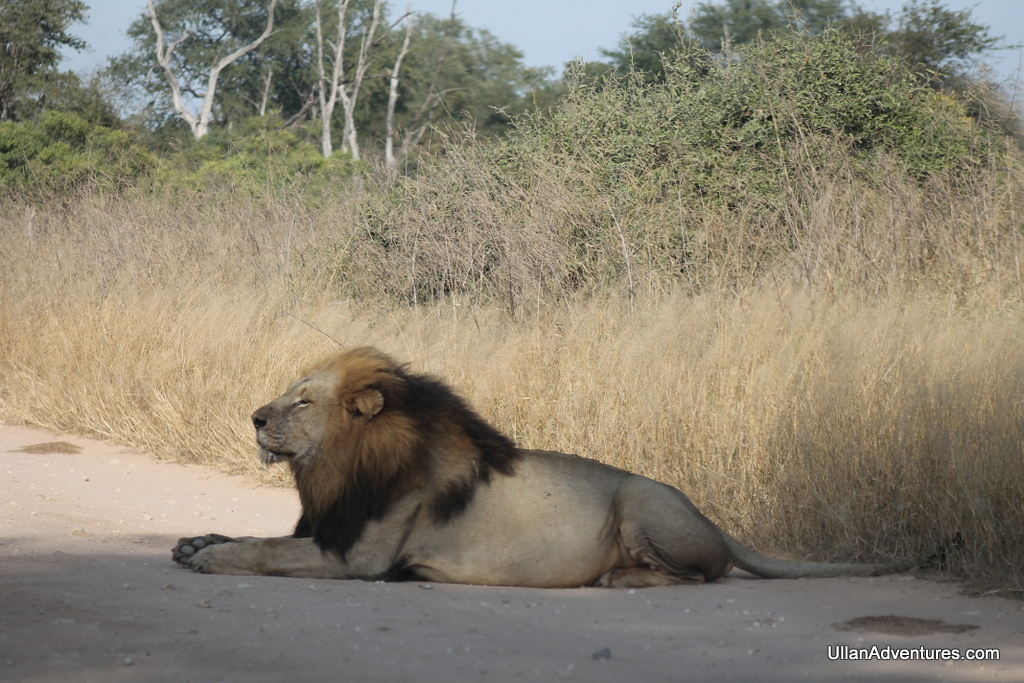 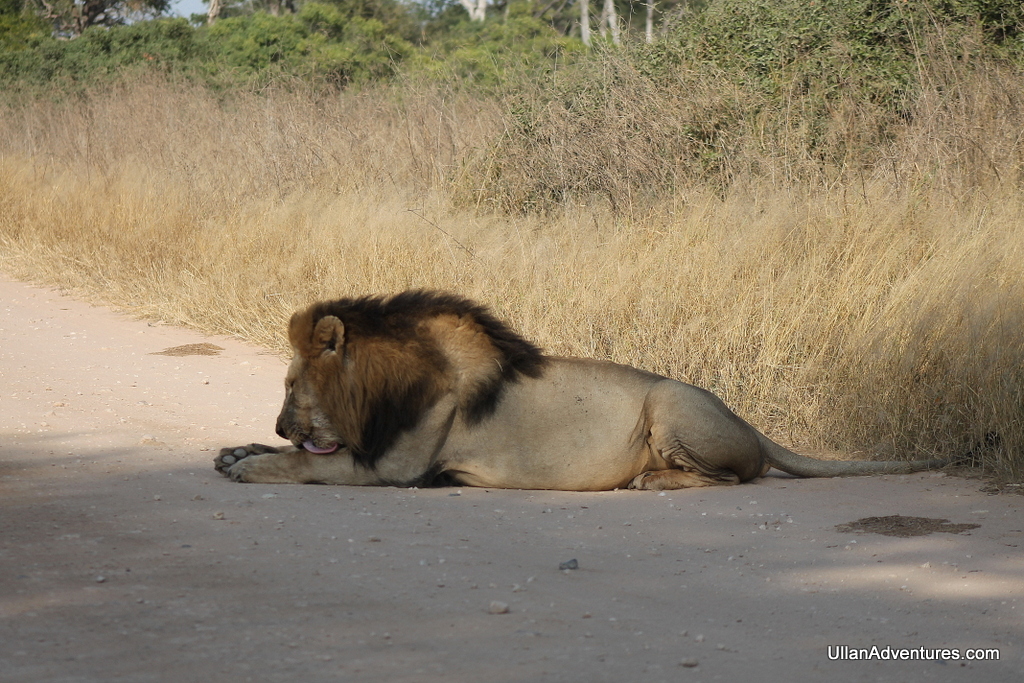 That afternoon Chuck and I went out right before sunset, but we didn’t see anything new.  And then that night we went out on a guided night drive from 8-10pm.  It’s pitch black out so they give a few people searchlights that they use to canvas the dark.  We found a male and female lion hanging out, then we found a male lion sleeping the road.  Our game vehicle pulled up right next to him – no joke, our wheels were maybe 6′ from him.  He could’ve easily stood up and tried to eat us, but luckily he was happier to sleep. 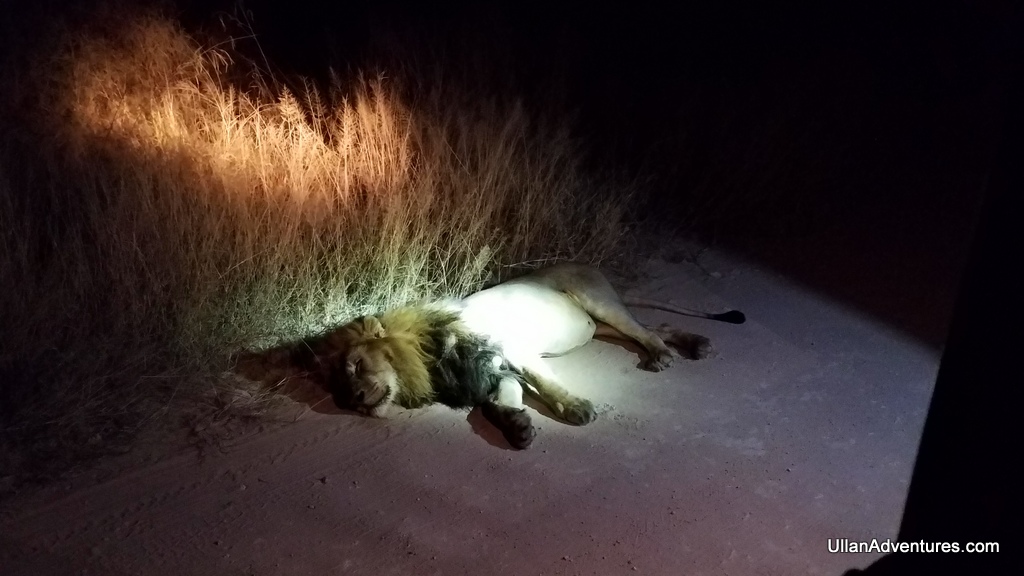 Lion sleeping in the road

This shows how close we really are to him. I think that’s Beckett’s head in the way.

We also saw jackals, a genet cat, and an owl as well as some of the usual animals.

Day 4 it was time to leave Satara and make the 4 hour drive to Skukuza camp.  We made a brief pit stop at Tshockwane picnic spot for a potty break then motored to Skukuza.  The vegetation got so thick near Skukuza that you couldn’t see a thing unless it was right next to the road or there was a mob of cars pulled over pointing out something interesting.  We still saw ostrich, 2 more lions, elephants, zebra, wildebeest, impala, warthog, baboon, kudu, and hippos out of the water.  And we saw a honey badger! 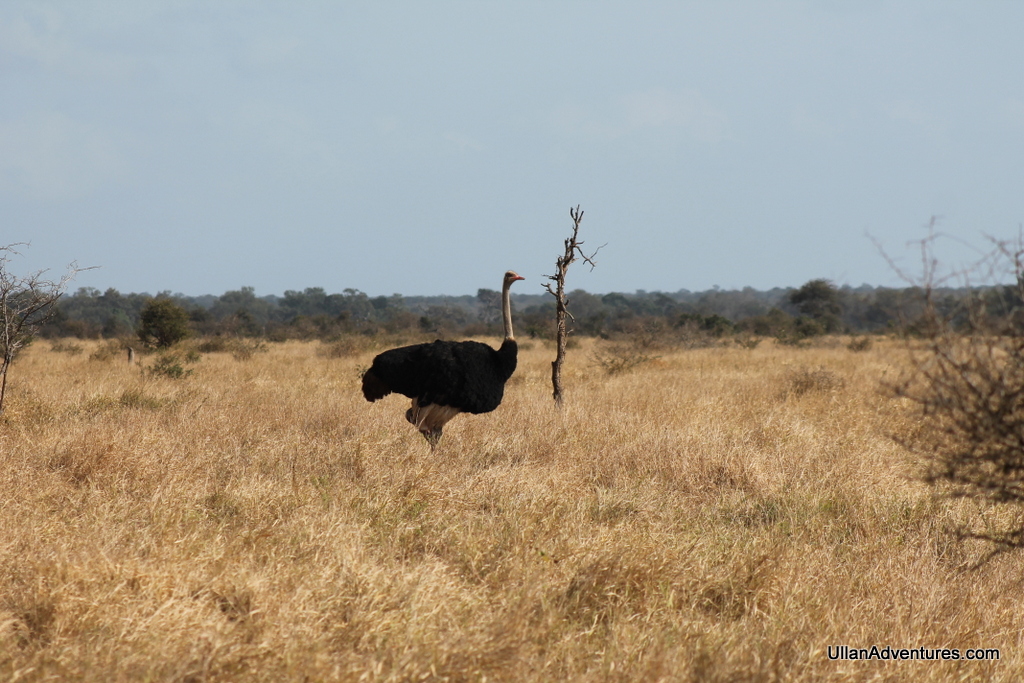 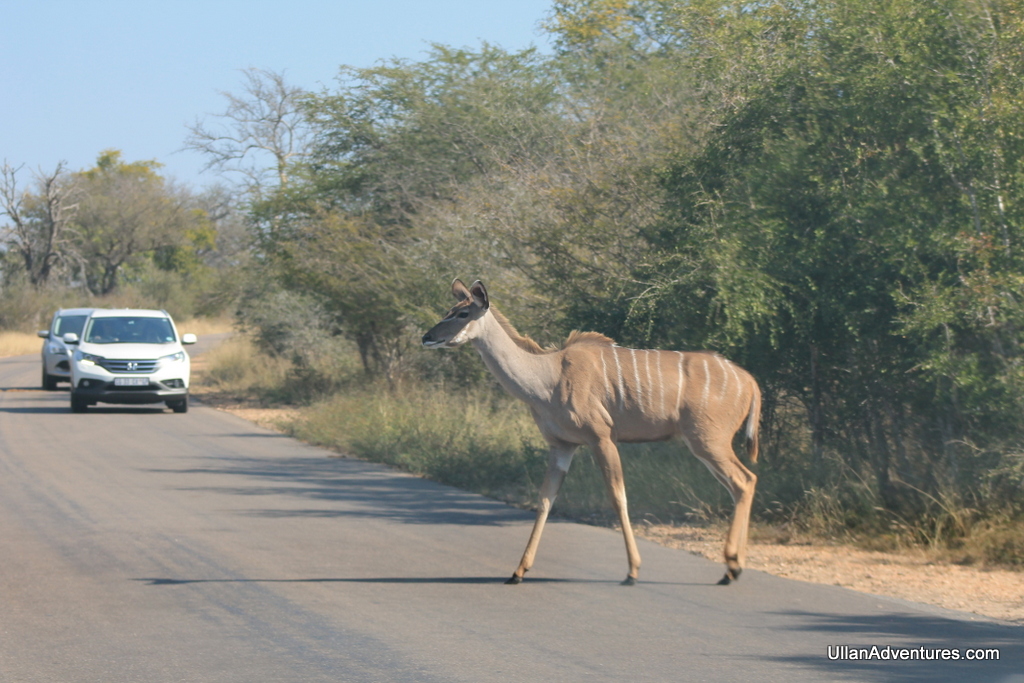 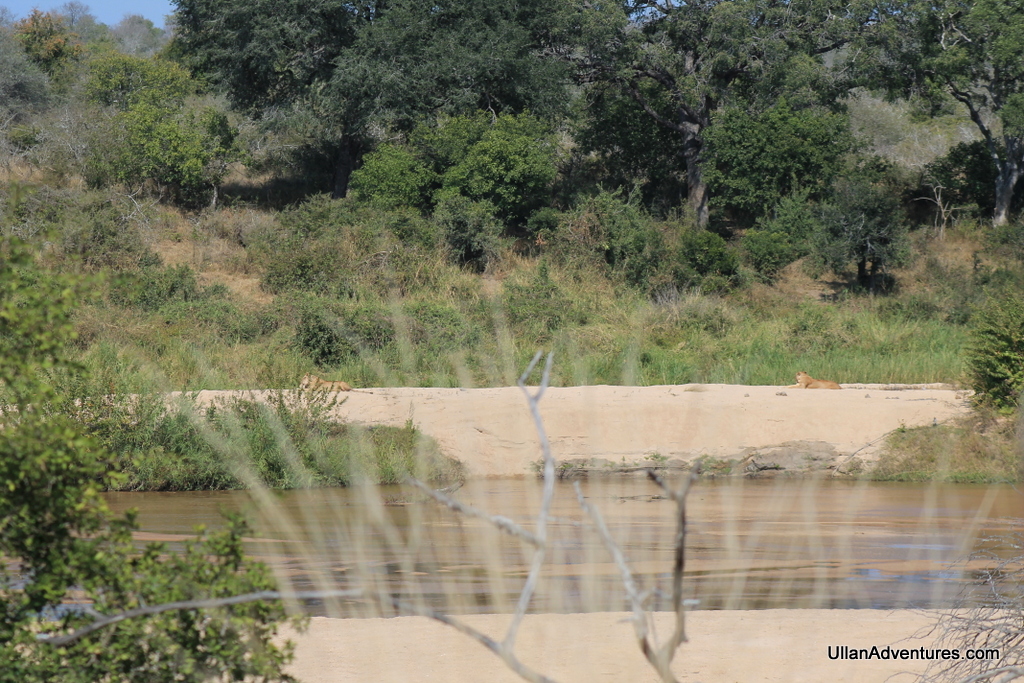 2 lions on the river bank 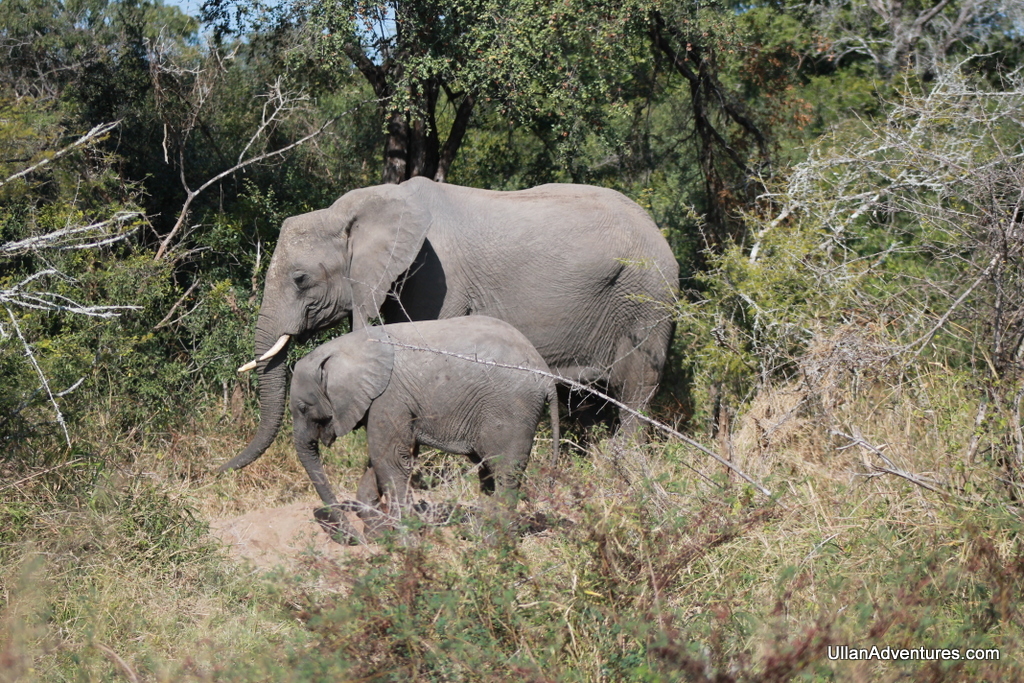 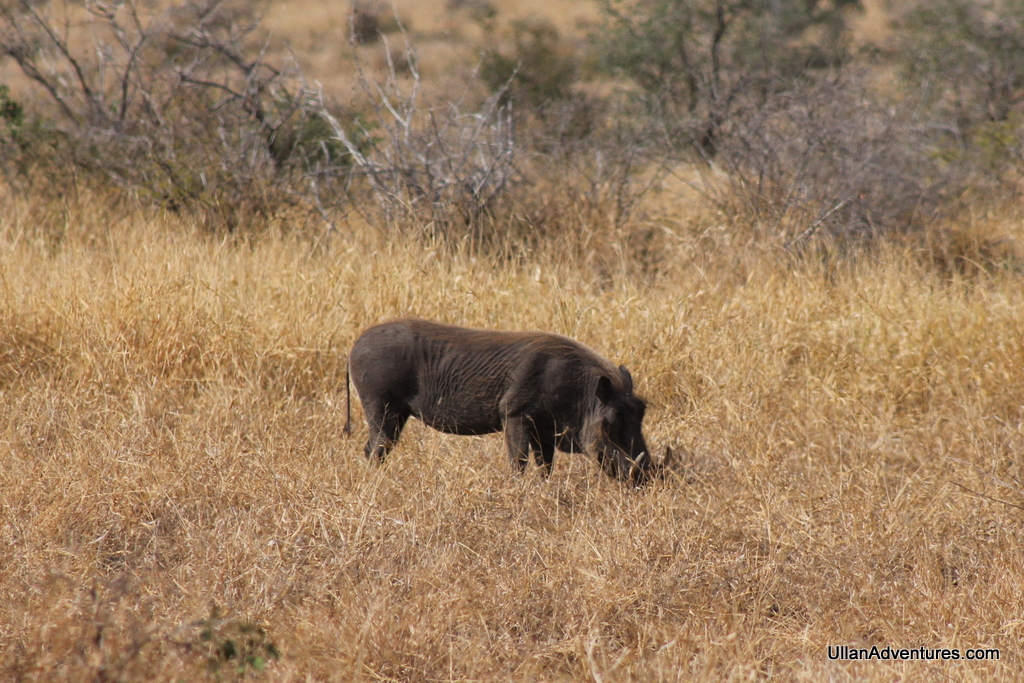 Once at camp, we ate lunch then checked into our cottage by the river. 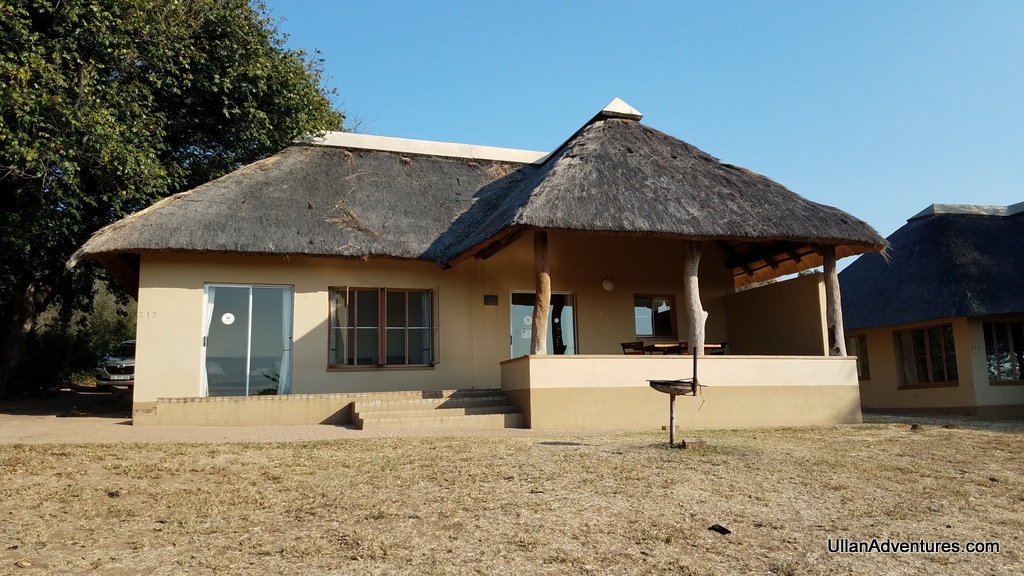 Our cottage in Skukuza

Then Chuck and I went out on a sunset drive hunting for leopard or cheetah.  Instead we saw a hyena that trotted beside our car.  He was much cooler than I expected. 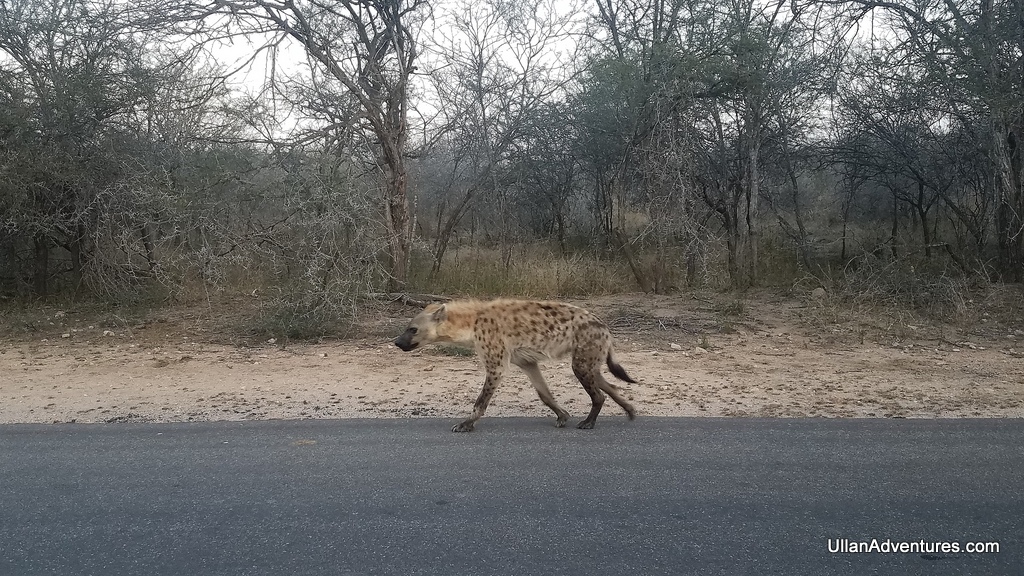 Day 5 was our last full day in Kruger. I woke really early and was treated to a mass migration of birds along the river.  It was unlike anything I’ve ever seen and lasted a good 20 minutes.  There had to be hundreds of thousands of birds that flew by!

Mara was kind of over all the driving at this point, but Beckett convinced me to sign up for a sunset drive with him as he was hoping to see a bushbaby.

Chuck and I were still hunting for leopard and/or cheetah so we went out in the morning, but didn’t see any.  We did find a troop of baboons covering a bridge though.  They were all over and cars were forced to slalom around them if they wanted to cross.  When we tried to cross, we had one baboon jump on the back of our car!  He sat there looking into our trunk and at us.  Eventually we drove away and he fell off although he tried really hard to hold onto our rear wiper.  Crazy! 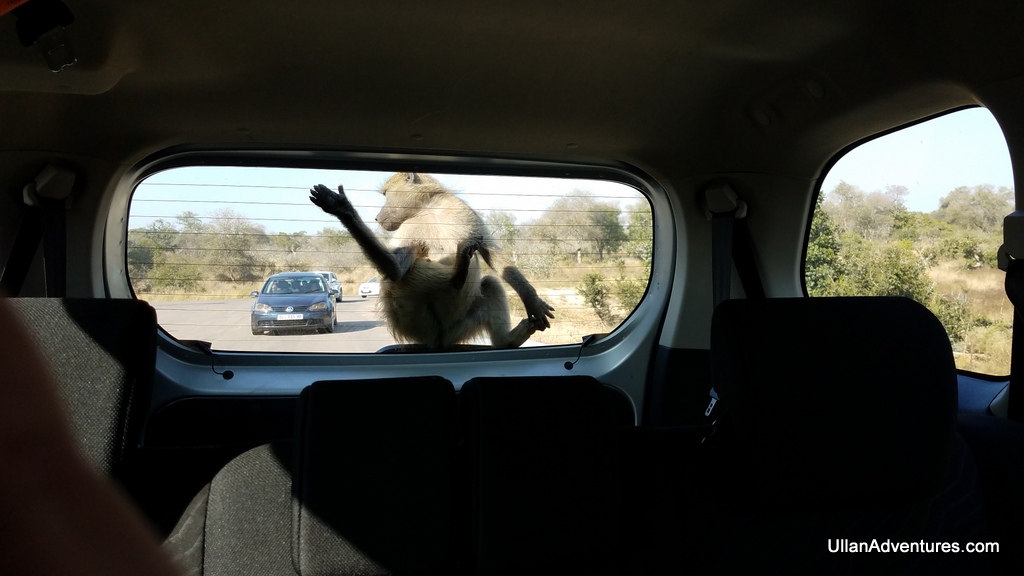 Baboon on our car window 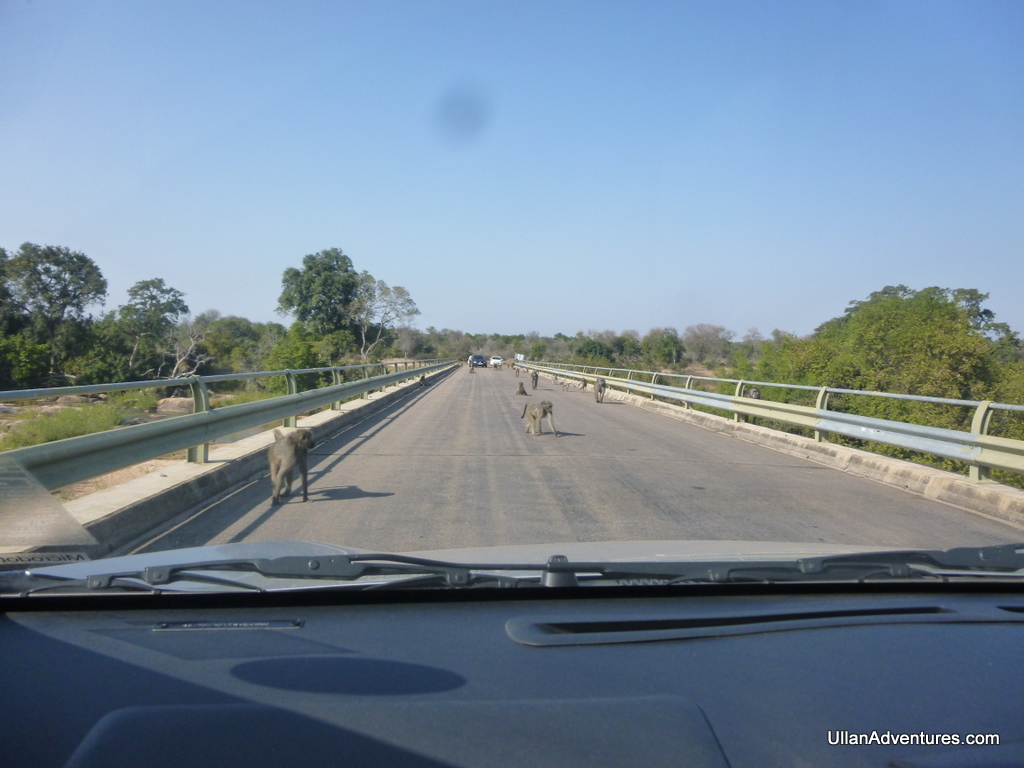 Baboons all over the bridge

That evening Beckett and I headed out on the most amazing guided sunset drive.  You can read more about it here.

Chuck and Mara stayed back at camp and had an African braai.  A braai is basically a BBQ and the camps have BBQ grills set up outside the huts and throughout camp.  They grilled impala, steak, corn, potatoes, and garlic bread and had a fantastic time! 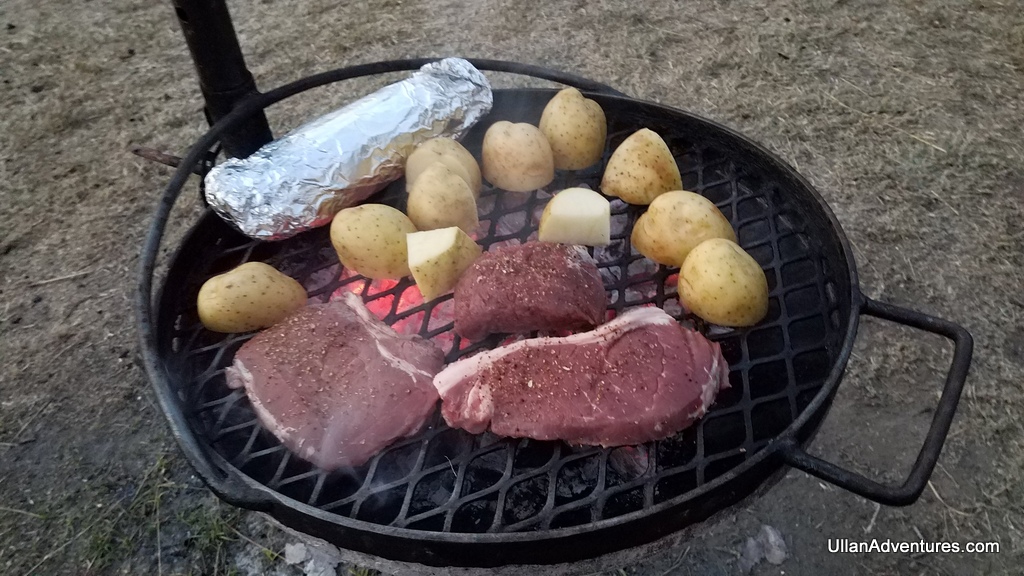 After our sunset drive, Beckett and I grabbed dinner and on the way back to our cottage, Chuck spotted the biggest porcupine I’ve ever seen.  He started following it trying to get a picture and I was trying to light it with my flashlight.  That is until the porcupine started running at me, so I promptly turned and ran away.  I wish we’d gotten a good picture because he was huge and so cool looking.

Day 6 came and it was time to check out and leave the park.  We drove about 2 hours to one of the gates and got one last look at all our favorite animals along the way: giraffe, elephants, antelope, a rhino mom and her baby, and more.  We even saw a female lion eating a buffalo kill. 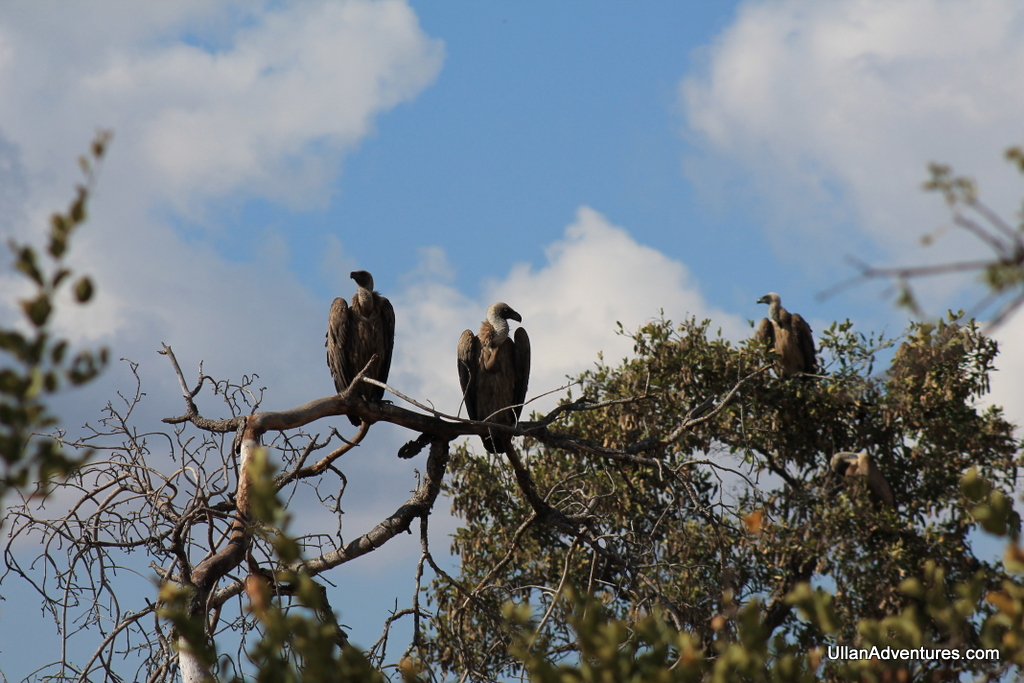 Lots of vultures in a tree near a lion kill

We also got a family picture before leaving the park. 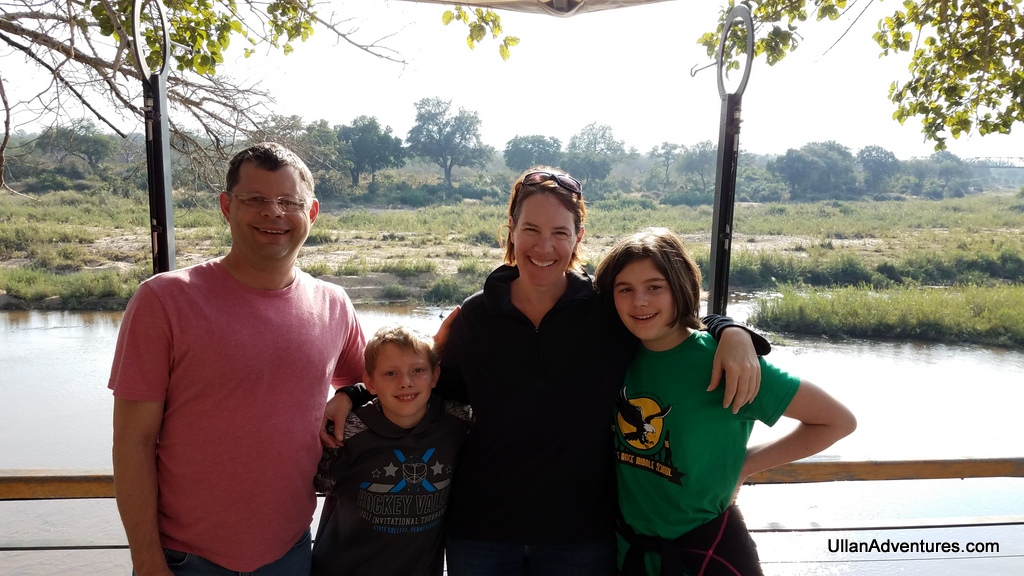 I was only a tiny bit sad to be leaving the park only because the experience was over.  Even though I’d been dreaming of an African safari for as long as I can remember, our time in Kruger exceeded my expectations.  I’m still blown away by all the animals and birds we saw.  And I feel much richer and so incredibly lucky for having experienced this amazing adventure.  All of us do.  What a highlight of my life!

Here are a few more pictures and video: 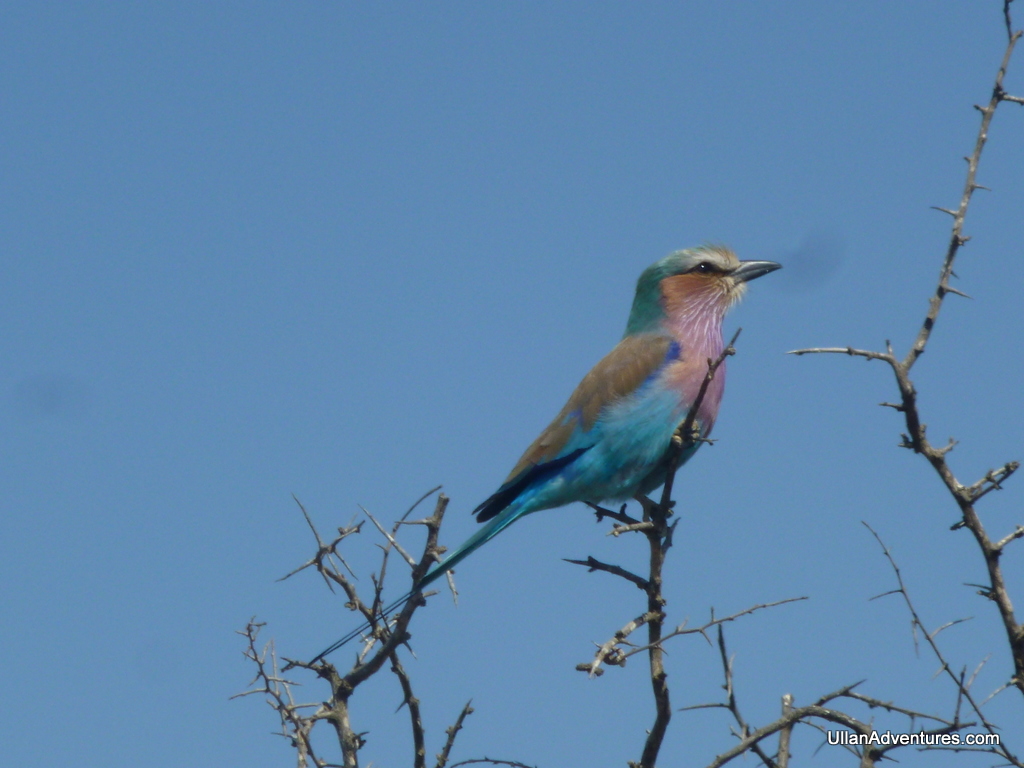 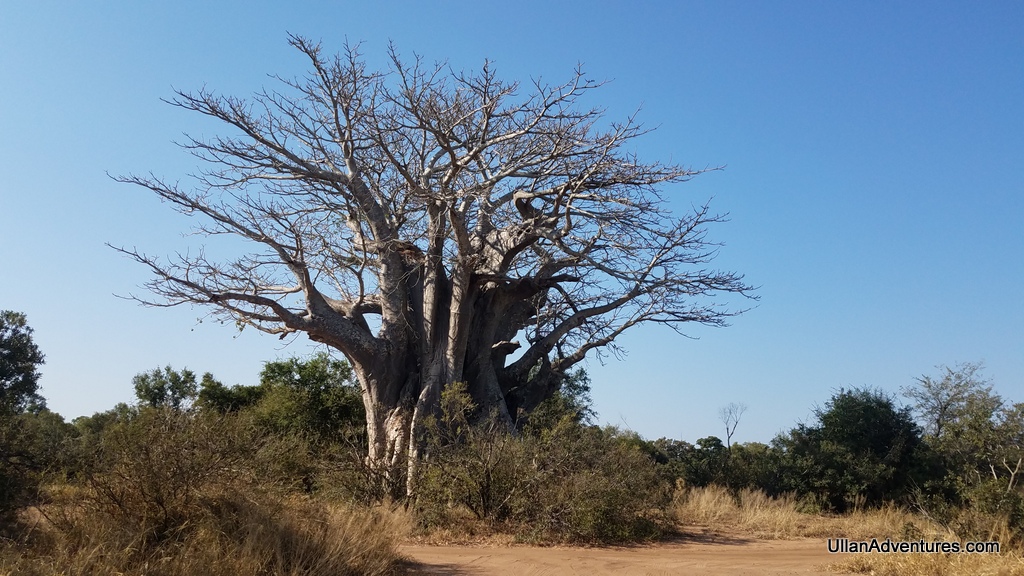 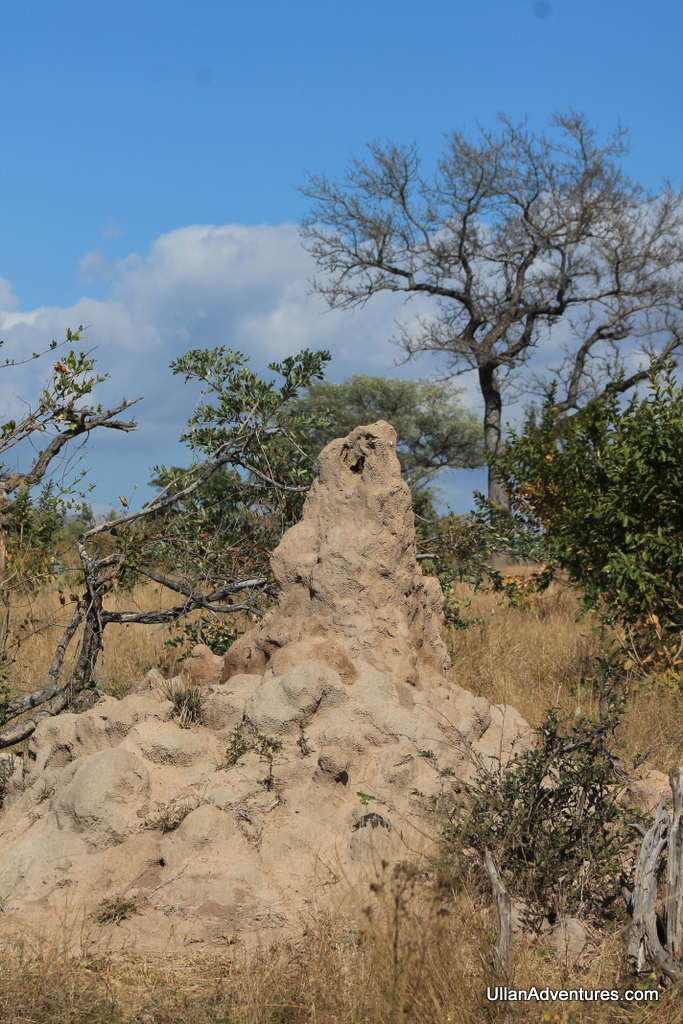 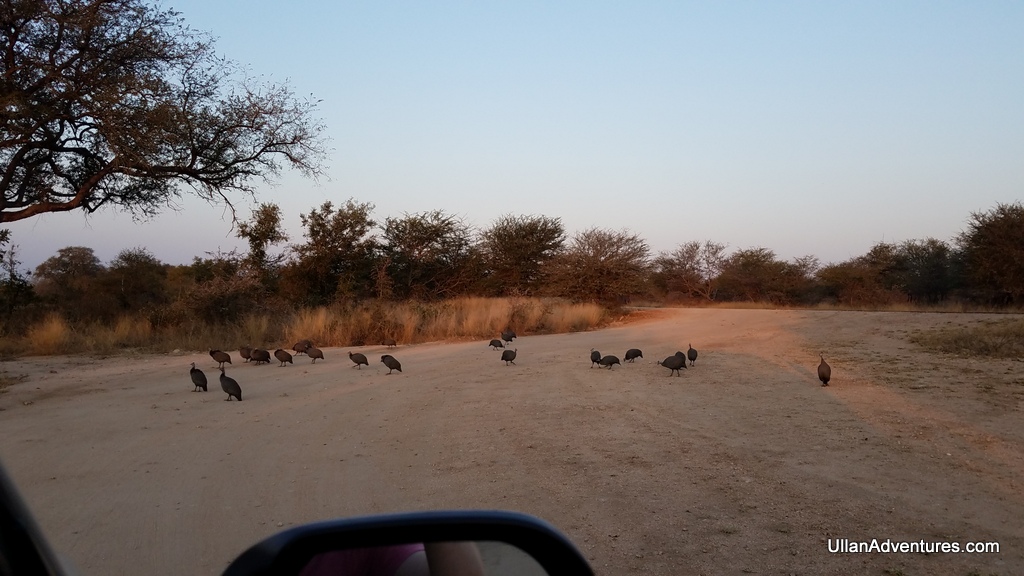 Guinea Fowl – Mara called them African chickens because they were everywhere 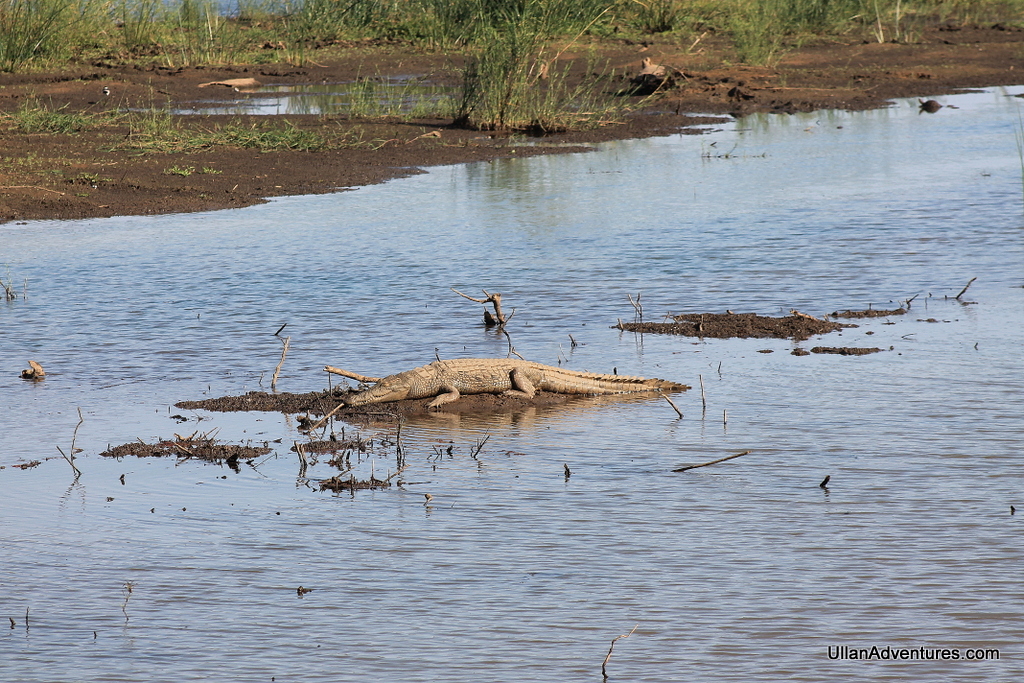 Driving Route: We took the H1-3 from Satara to Tshokwane. Then we took the H1-2 from Tshokwane to Skukuza. The whole trip is around 93km and took about 4:45
Animals: Ostrich, honey badger, elephant, zebra, wildebeest, impala, warthog, baboon, hippos out of the water, 2 lions, kudu

Driving Route: We took the H4-1 to the H12 bridge and back
Animals: Baboons on H12 bridge, monkey, kudu, impala and warthogs near camp.  Porcupine and a small antelope at camp.