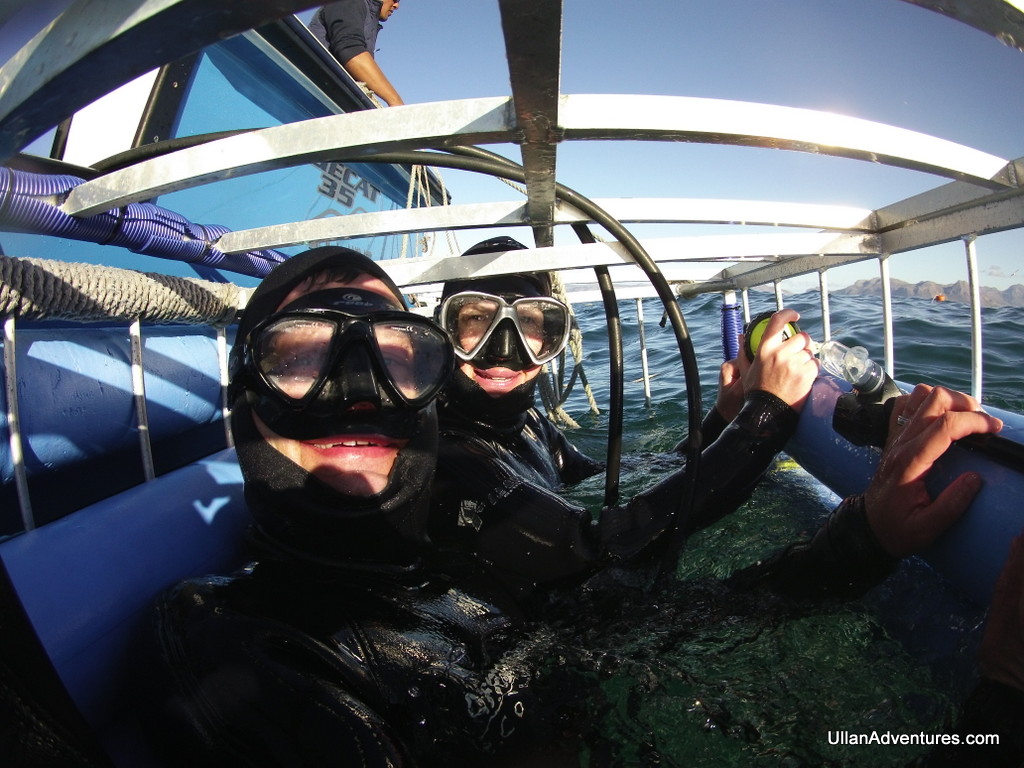 I remember watching a nature show years ago and seeing Great Whites leaping out of the air at a place called Seal Island near Cape Town, South Africa.  It instantly got put on my bucket list, although it was one of the few experiences on my list that made me really nervous.

It turns out, the great whites only leap out of the air at this one spot and only for a few months out of the year.  As luck would have it, that time frame coincided with when we’d be there!

I asked the kids if they wanted to go along, and they were both huge yeses.  In fact, I was the only nervous one out of the 4 of us.

So on our 2nd day in Cape Town, we got up at 4:30am and drove an hour south of Cape Town to Simon’s Town.  Around 7am we headed out in the freezing cold with our fingers crossed we’d see some sharks.  It was so cold out that the 3 of us bought hats at a different dive shop to try to keep warm, yet we still needed their cover ups and blankets to not be miserable. 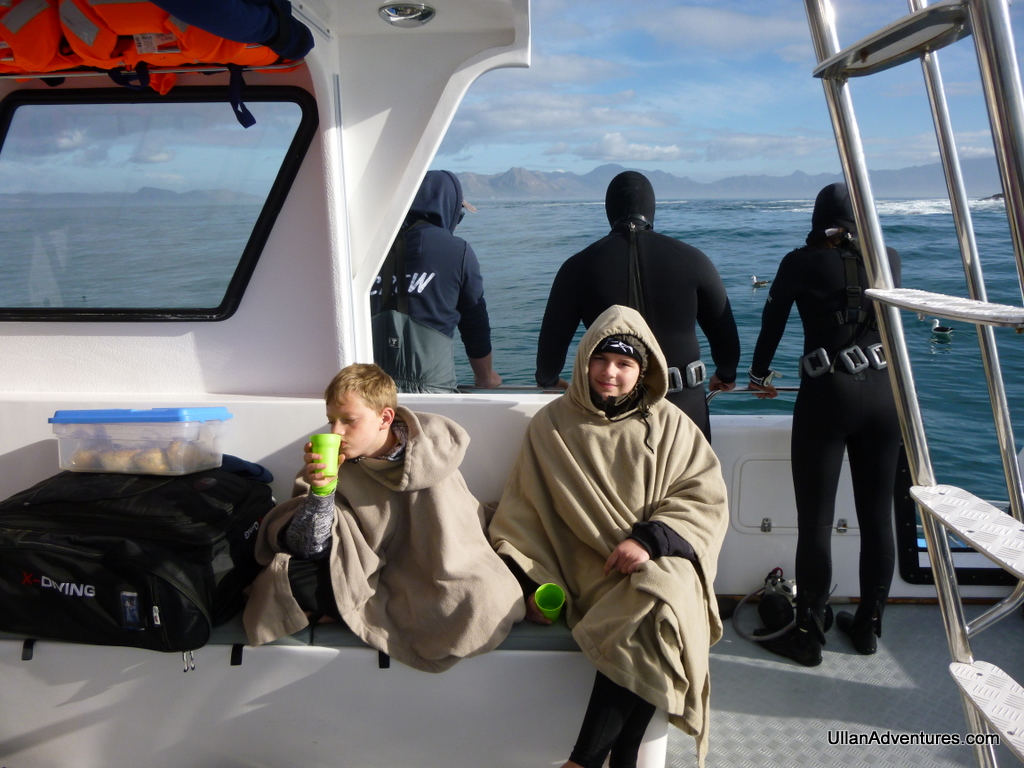 After 30 minutes, we arrived at Seal Island and started the look out for the sharks. 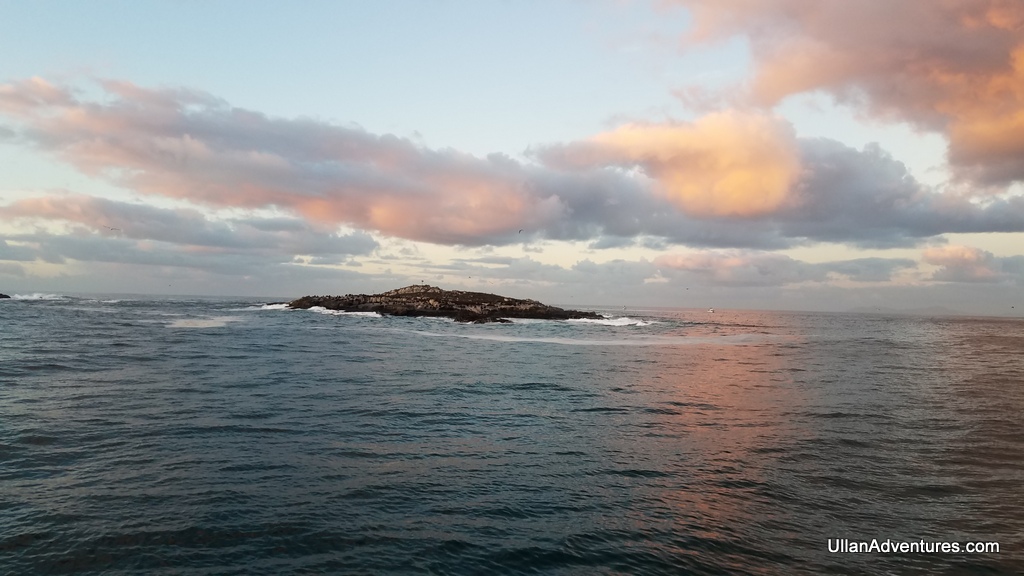 Seal Island in the distance 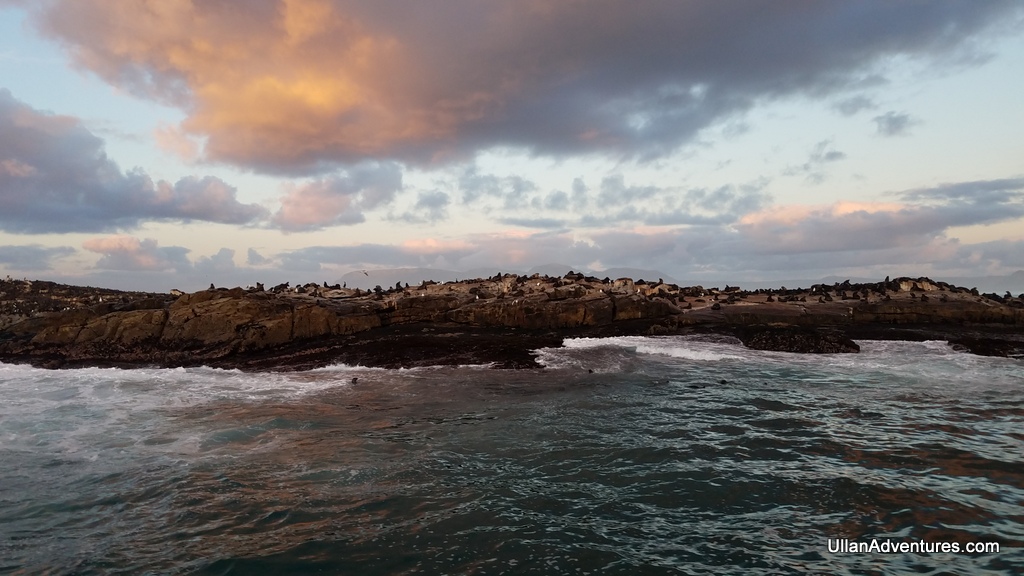 The sharks are hunting baby seals that are going out feed with the adults for the first time.  So first you find a group of seals returning to Seal Island then watch them to see if they get attacked.  I LOVED seeing the seals swimming in – and seeing the babies – and quickly found myself rooting for the seals to have a safe passage even though I really wanted to see a shark.

After about 30 minutes, the dive company, African Shark Eco Charters, towed a decoy behind the boat for about 30 minutes hoping a shark would go for the decoy.  Unfortunately we didn’t see any sharks and the other boats didn’t seem to be having any better luck.  In fact, it was really quiet out there and nobody seemed to be seeing anything.

Luckily the ocean was pretty calm and flat, but Mara still got sick and threw up a few times.  Beckett and I did OK though.  Once it warmed up, he was enjoying himself. 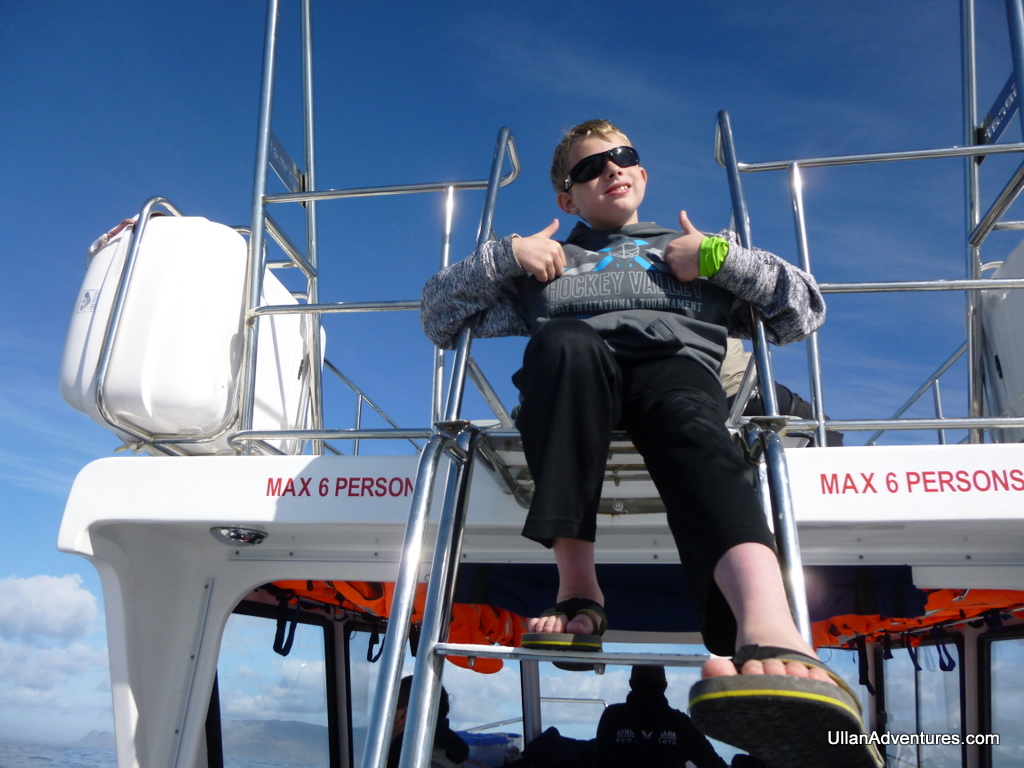 We stayed out there an extra hour hoping to get lucky, but finally gave up around 11:30am, took one last spin around Seal Island, and went back to shore. 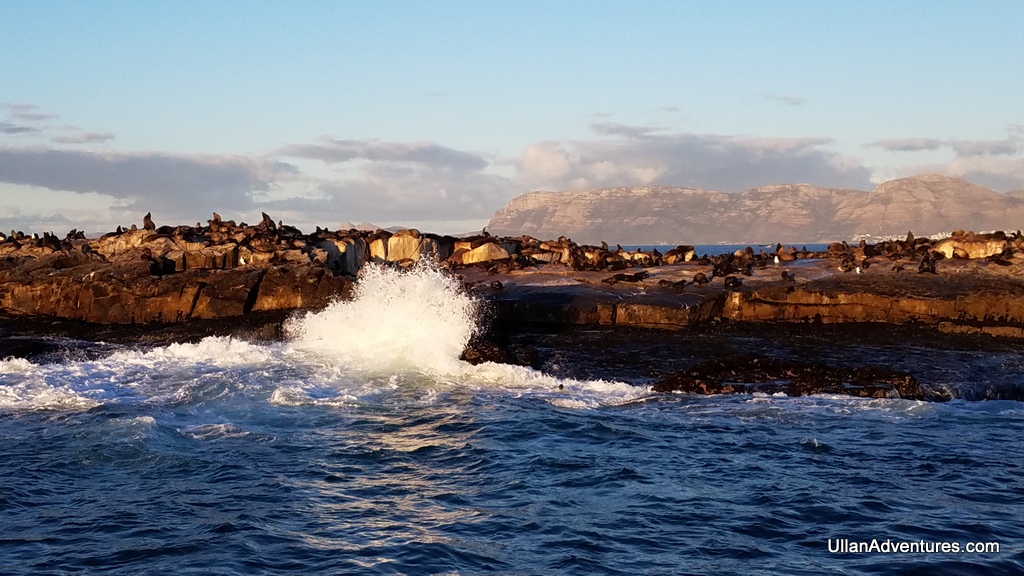 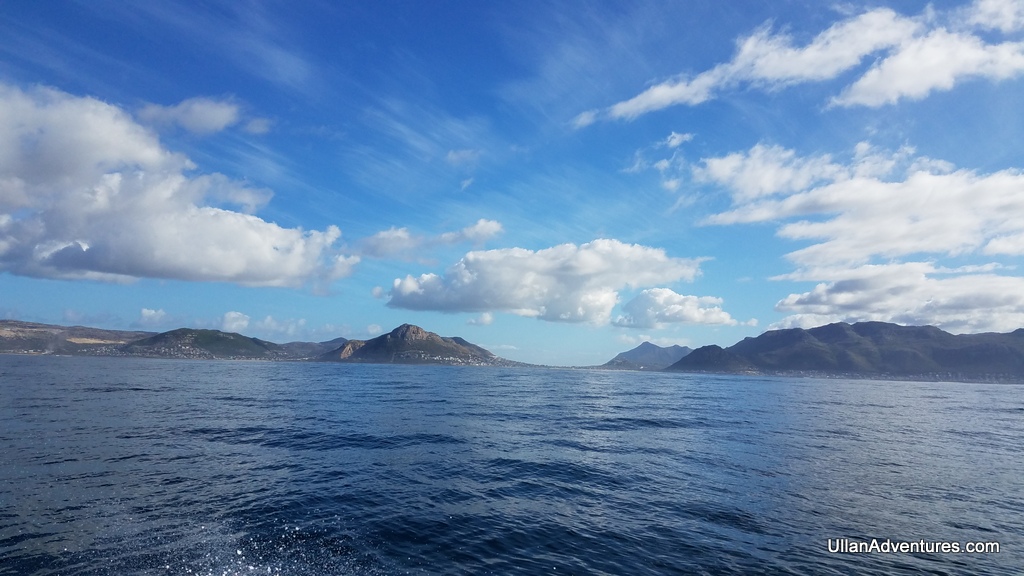 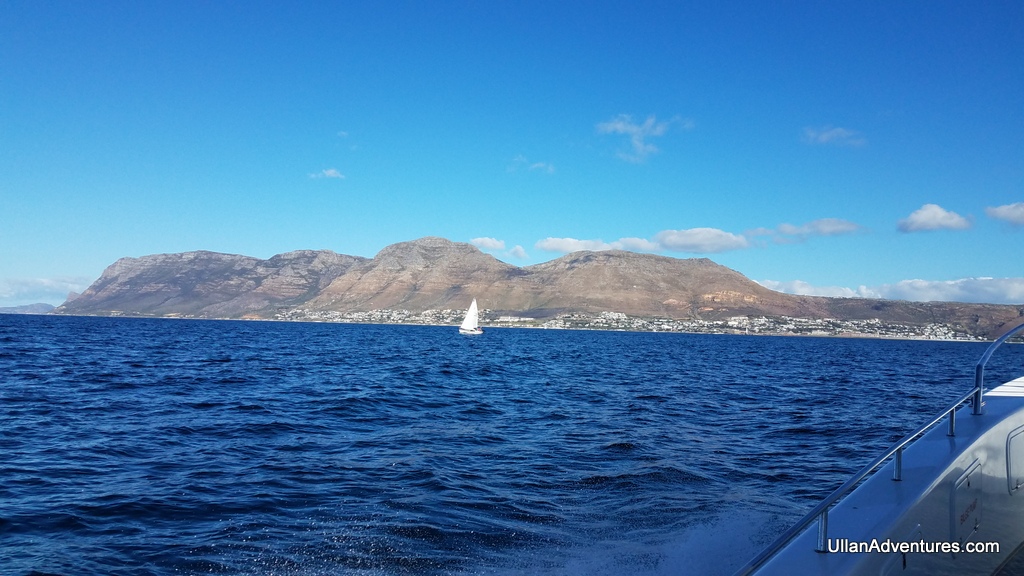 Our dive company offers a voucher to go back out for free if you don’t see any sharks, so we were hopeful we could go out the next day.  But then we found out they were completely booked for the next day which was our last day in Cape Town.  It was looking like we got shut out of seeing the sharks and spent a ton of $$ on a boat ride. 🙁

We checked in with the dive company a couple more times in the hope that someone canceled, but they were still full.

Driving back from Simon’s Town

Once we got back to our AirBnb, we called again and this time found out they had 2 spots available.  Mara didn’t want to go out again, but Beckett did so we had to figure out who got to go.  We decided that Chuck and I would go and the kids would stay home and sleep in which Beckett said he as fine with.

So at 4:30 the next morning, Chuck and I headed back down to Simon’s Town hoping to get lucky.

As soon as we got out to Seal Island, there was a shark attack nearby.  I missed the initial strike, but was able to see the shark strike a couple more times.

Then there was another attack! 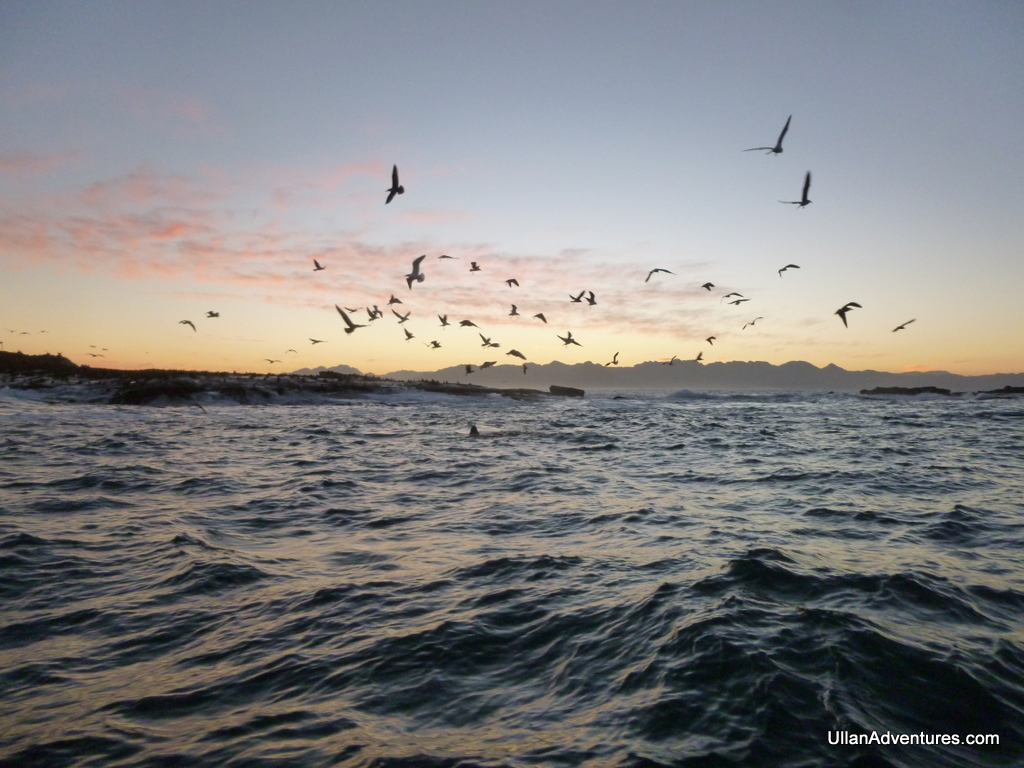 Once things died down, they towed the decoy to see if we’d get any bites.  And we did! 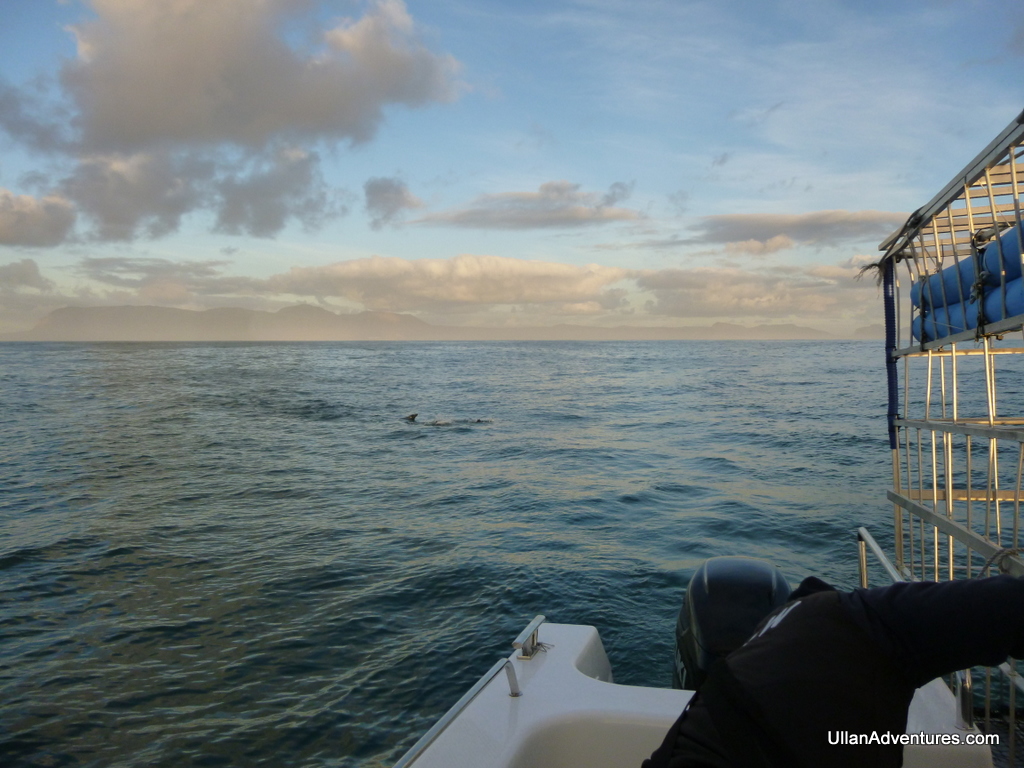 They then dropped anchor, chummed the water, and set out the dive cage.  Four people jumped at going first so they got all suited up in thick wetsuits – the water is COLD – and waited.  Once the crew saw a shark, they hopped into the cage and got an underwater view of a shark swimming by.  I think they saw 2-3 sharks before their time was up. 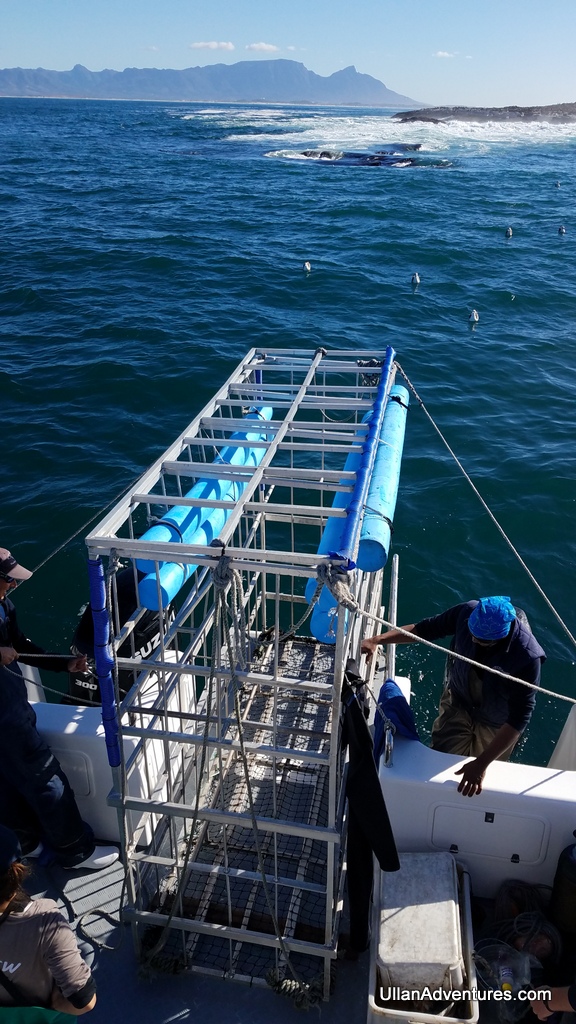 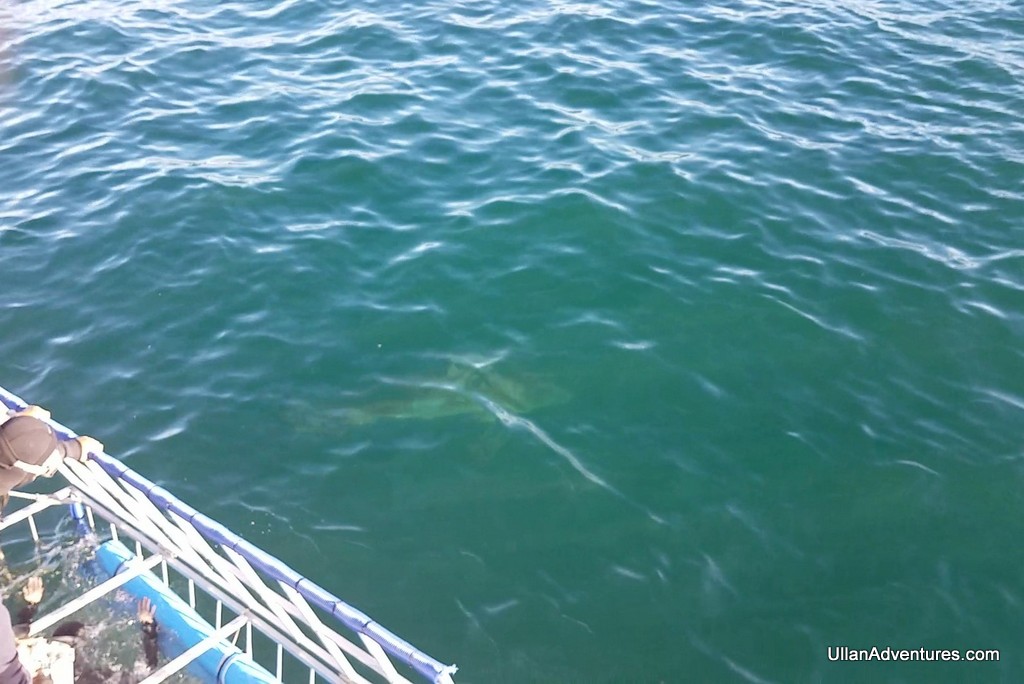 Can you see the shark?!? 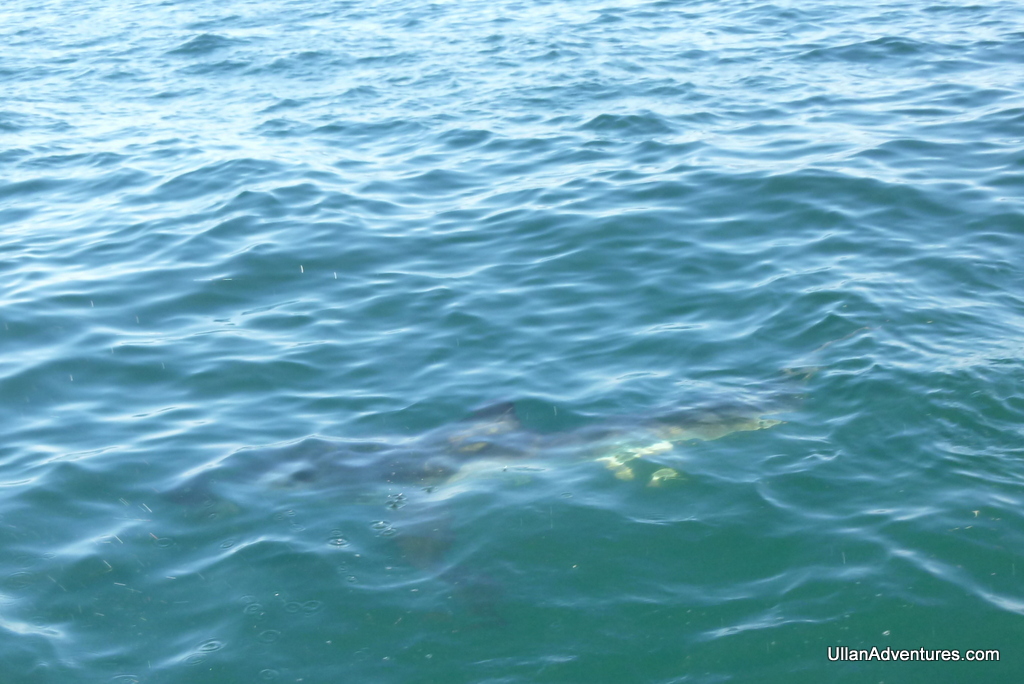 Chuck and I were in the next group and hopped into the cage.  Despite the 7mm wetsuit, hood, and boots, the bitterly cold water still makes its way in.  And our hands were exposed which didn’t help.

Waiting for our turn 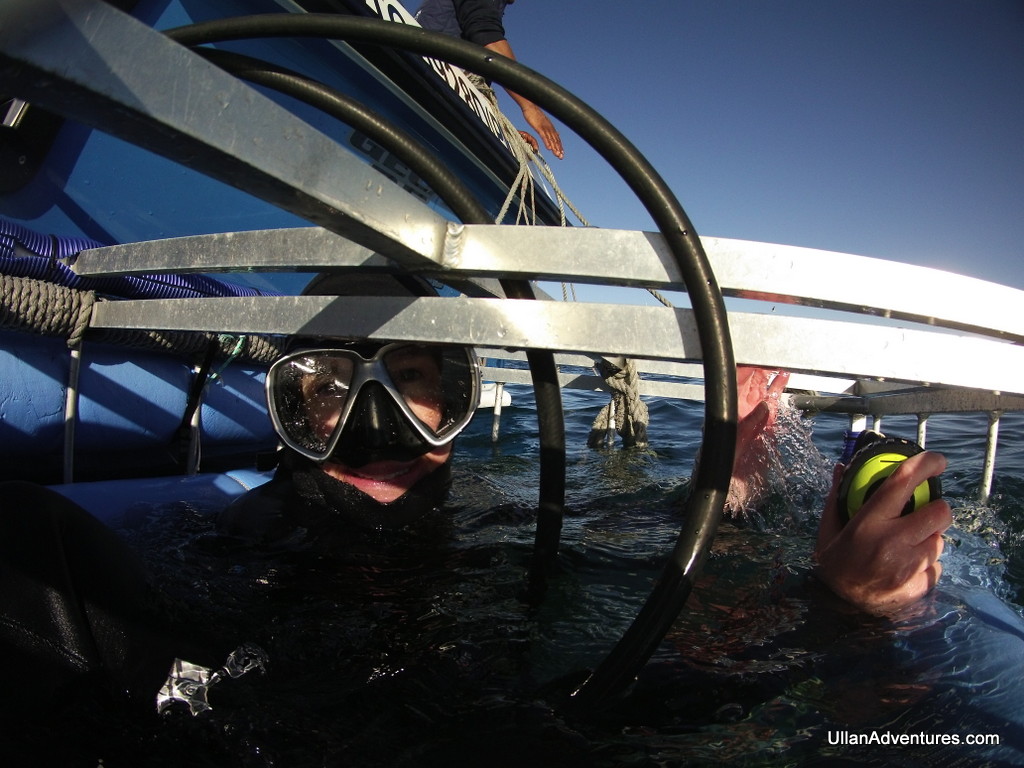 In the shark cage 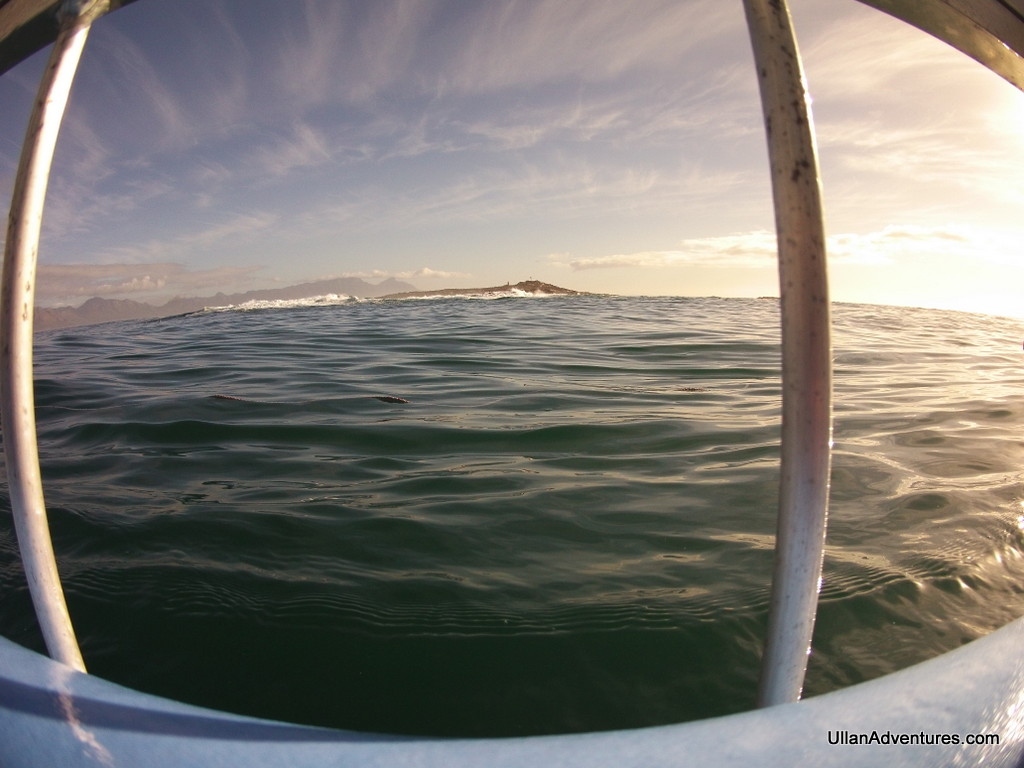 From in the cage

I personally hated being in the cage.  I didn’t have a good place to anchor my feet without them sticking out, I was trying to hold on to the top of the cage so my head didn’t slam into it as the water bobbed us around and slammed us into the boat, and I was shaking because I was so cold.  I kept thinking about getting out, but knew I’d regret it if I missed seeing a shark.

Eventually the crew yelled that shark was approaching and told us to go underwater and look near the buoy.  We had scuba hoses so we could breathe underwater – that’s why I picked this particular company – so we could watch without having to come up for breaths.

I saw a huge shark lazily swim maybe 10′ in front of us before he turned and headed out in the distance.  I couldn’t believe it!  The water is so murky, yet I still got a good look at him.

We hung out for a while longer in the cage, but didn’t get anymore sightings.  Once out of the cage, I realized that I was the only one in our group of 4 to see the shark!  I have no idea how they missed him, but felt even more fortunate that I saw him!

Sadly that was the last shark sighting of the day and after waiting around a bit longer, we headed back to shore.

I’m so grateful that Chuck and I got to go back out a 2nd time and that we got to see some sharks.  I was sad the kids never got to see one, but seeing as Beckett was throwing up when we got back to our rental, it ended up working out for the best.

Next post: A Dream Day in Kruger National Park