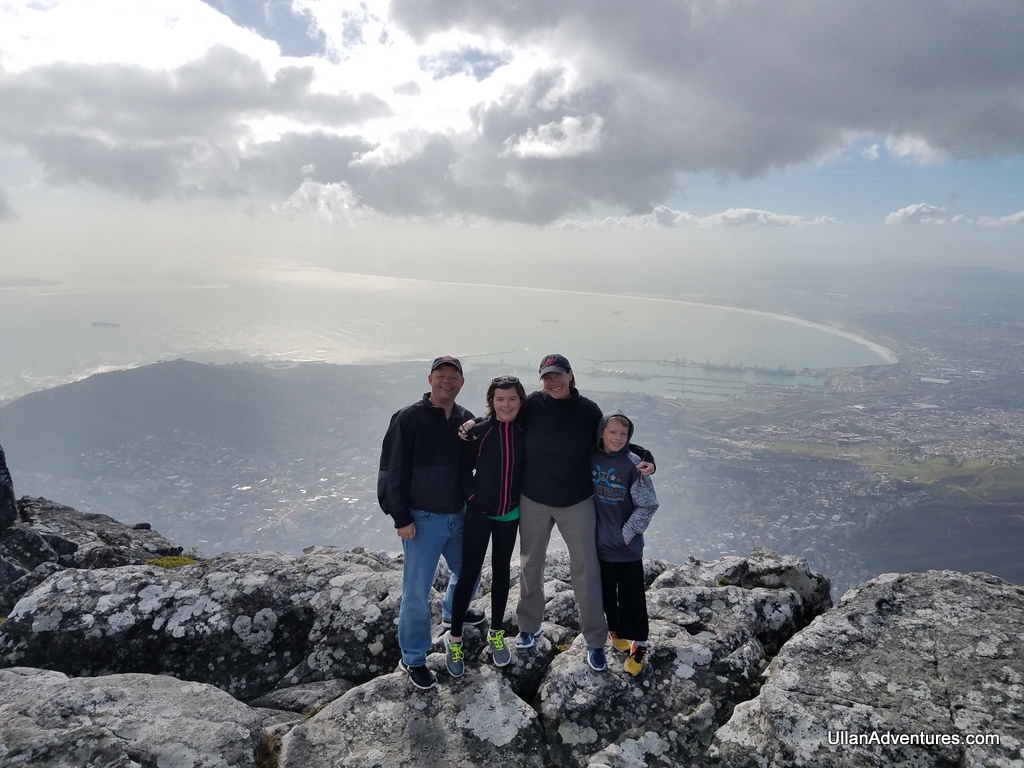 On top of Table Mountain

After 5 days of island life on Mauritius, we headed to Cape Town for 3 days.  Instead of a hotel, we got a condo through AirBnB near the V&A Waterfront.  Wasn’t always the most convenient place relative to all the attractions we visited, but the views were nice and we had plenty of dining nearby.

The views from our condo:

The view from our condo – Table Mountain in the distance 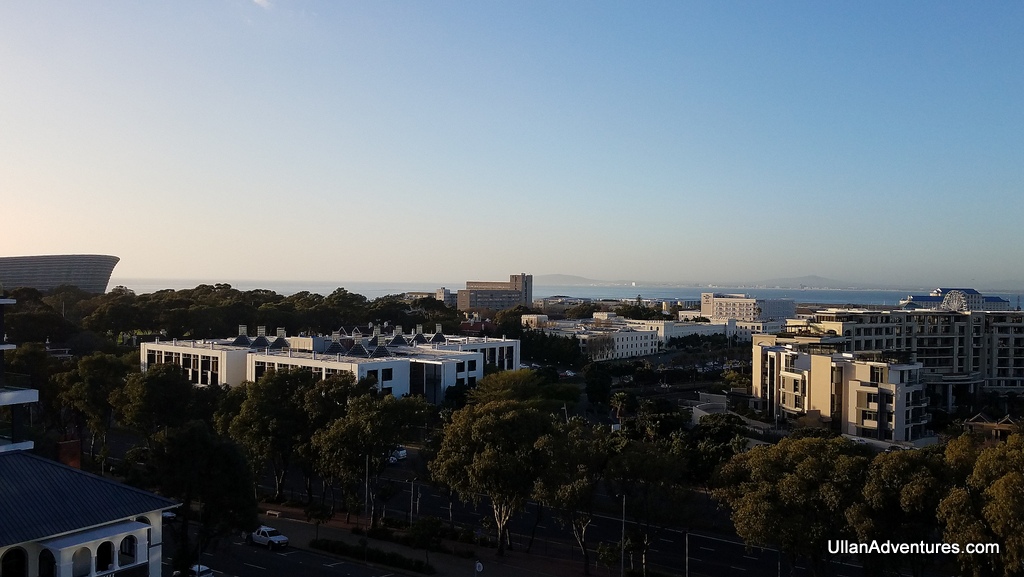 The first morning we grabbed breakfast then headed to Table Mountain.  The weather wasn’t perfect, but we’ve heard that Table Mountain gets shut down often due to bad weather and wind, so we needed to jump on getting up there when we had a decent enough window.

We drove part way up the mountain, then took the cable car to the top.  The car spins so everyone gets a view as you ascend. 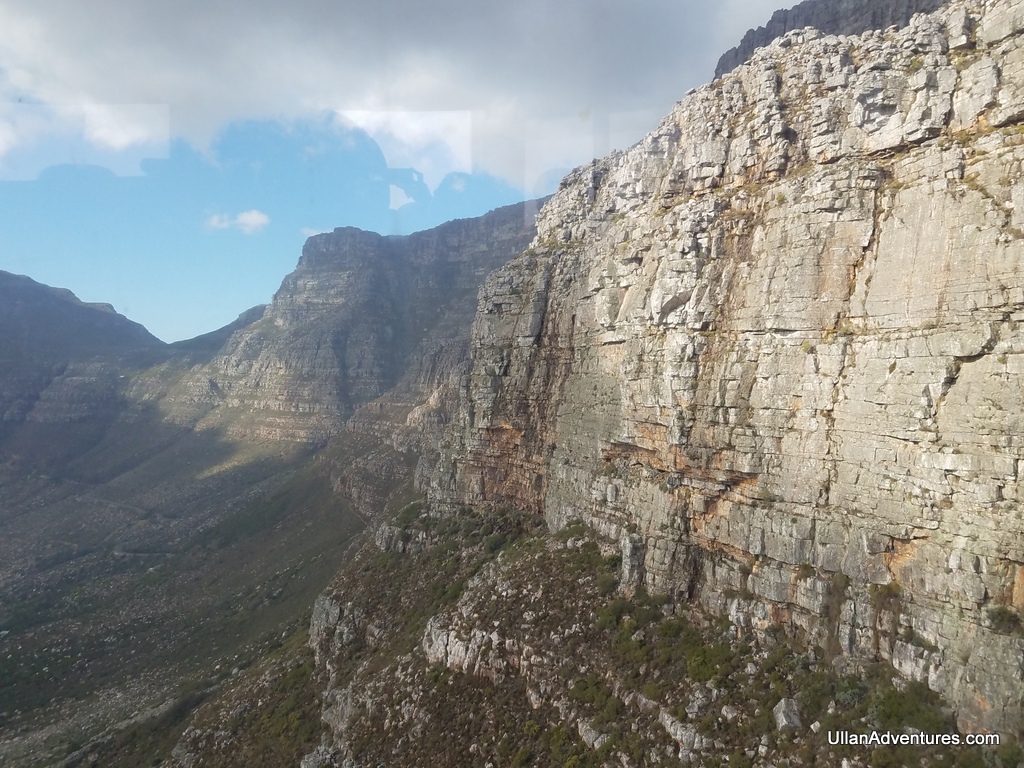 The side of the mountain on the ascent 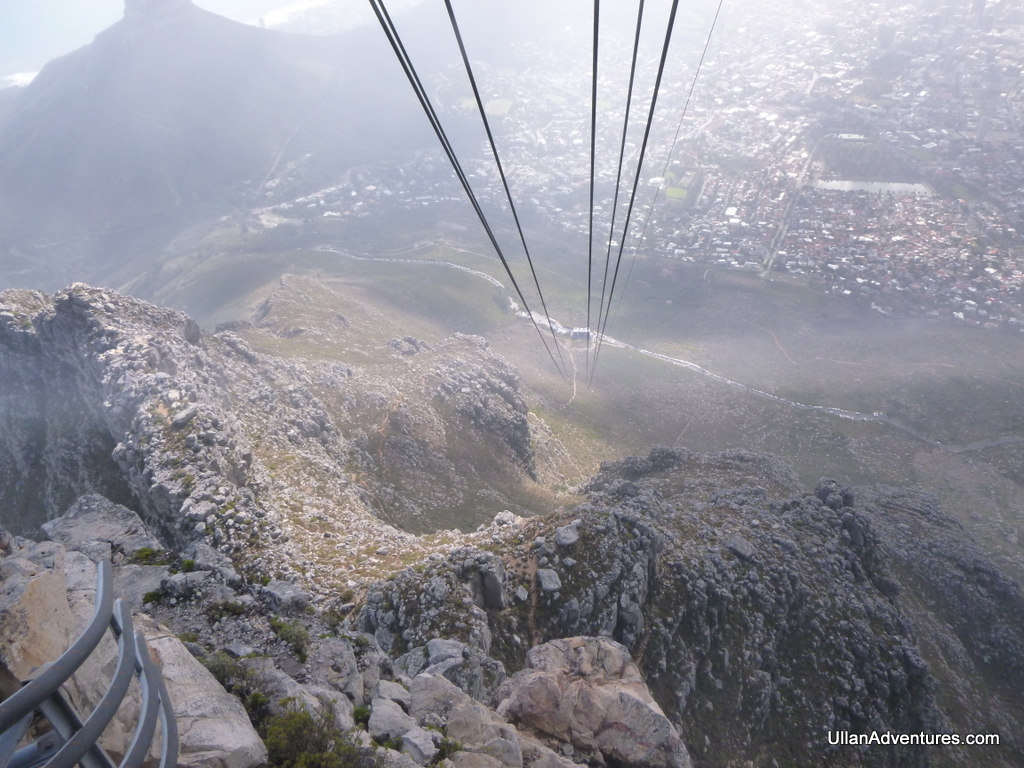 That’s a long way down!

It was freezing up top!  It was also a bit hazy so the views weren’t amazing, but it was still pretty cool.  It was also far rockier up there than we expected.  We spent about an hour wandering around the top taking in the views of the city from all sides. 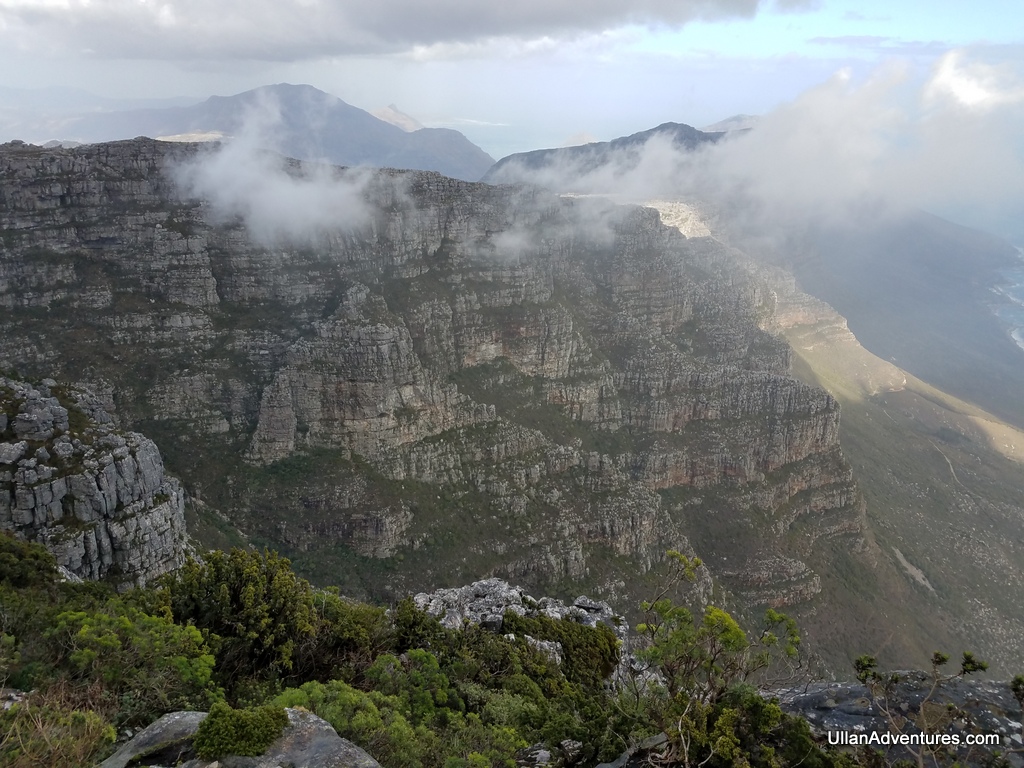 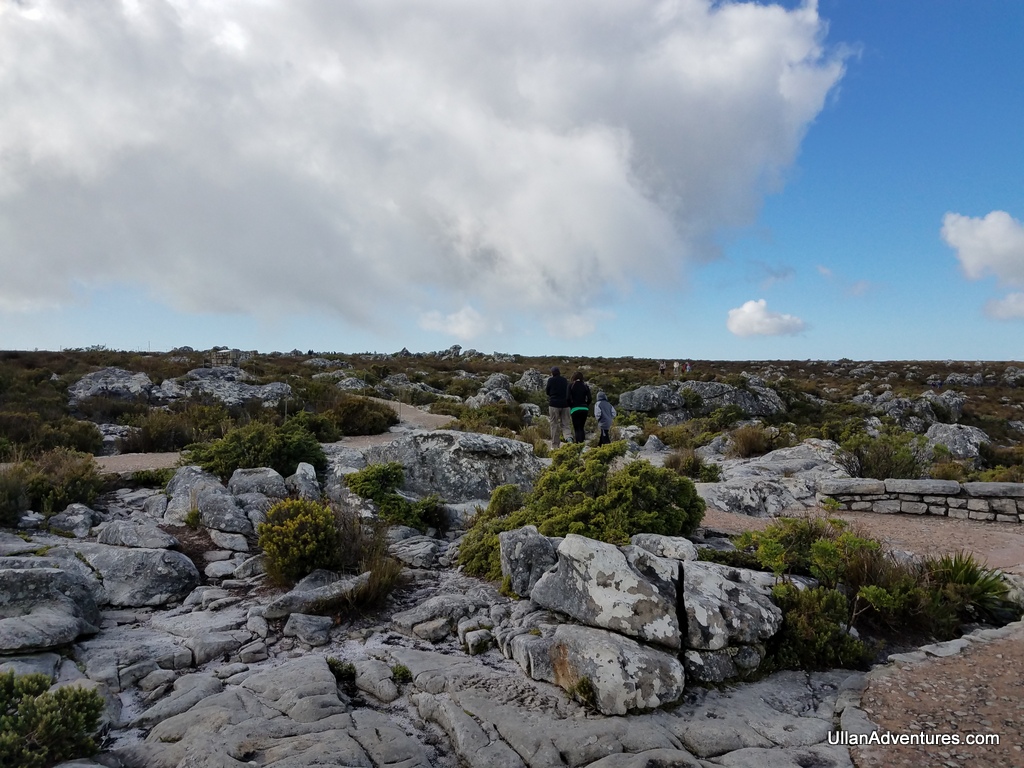 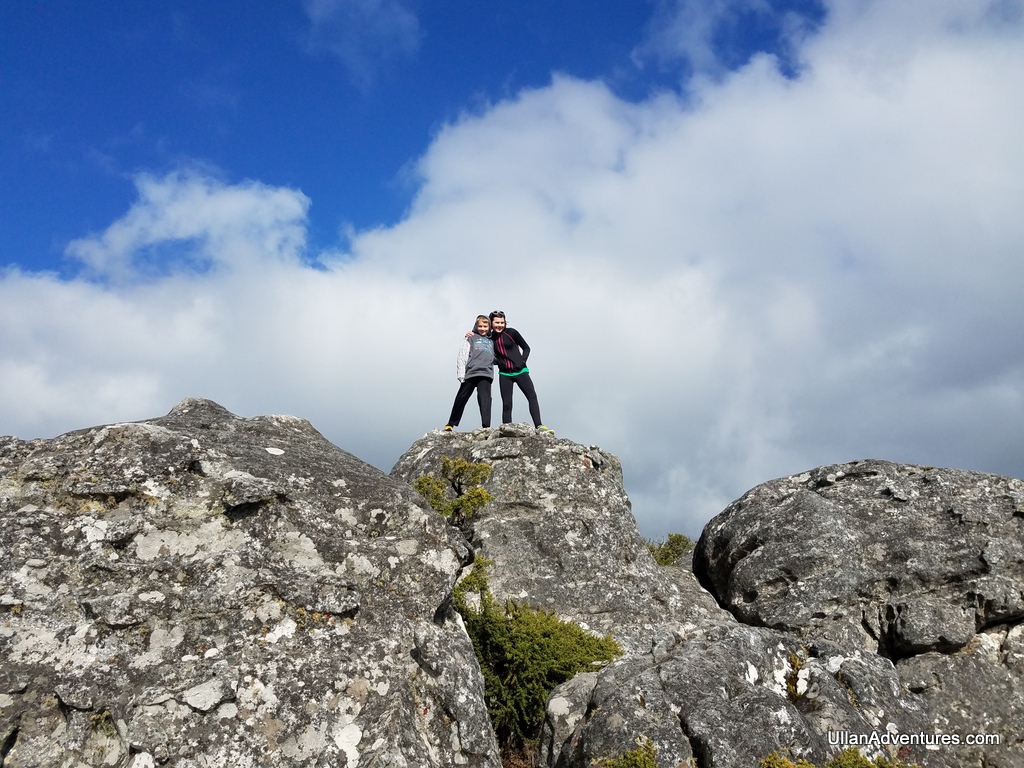 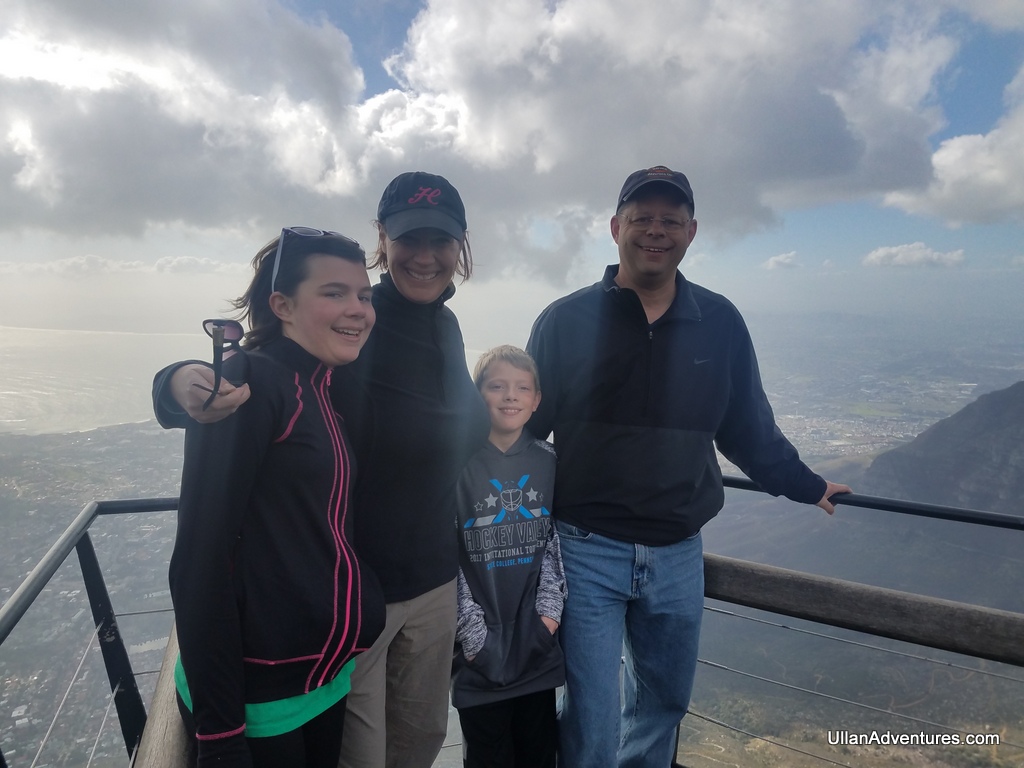 We gave the kids a camera so they could capture their perspective. We should’ve known this is what we’d find: 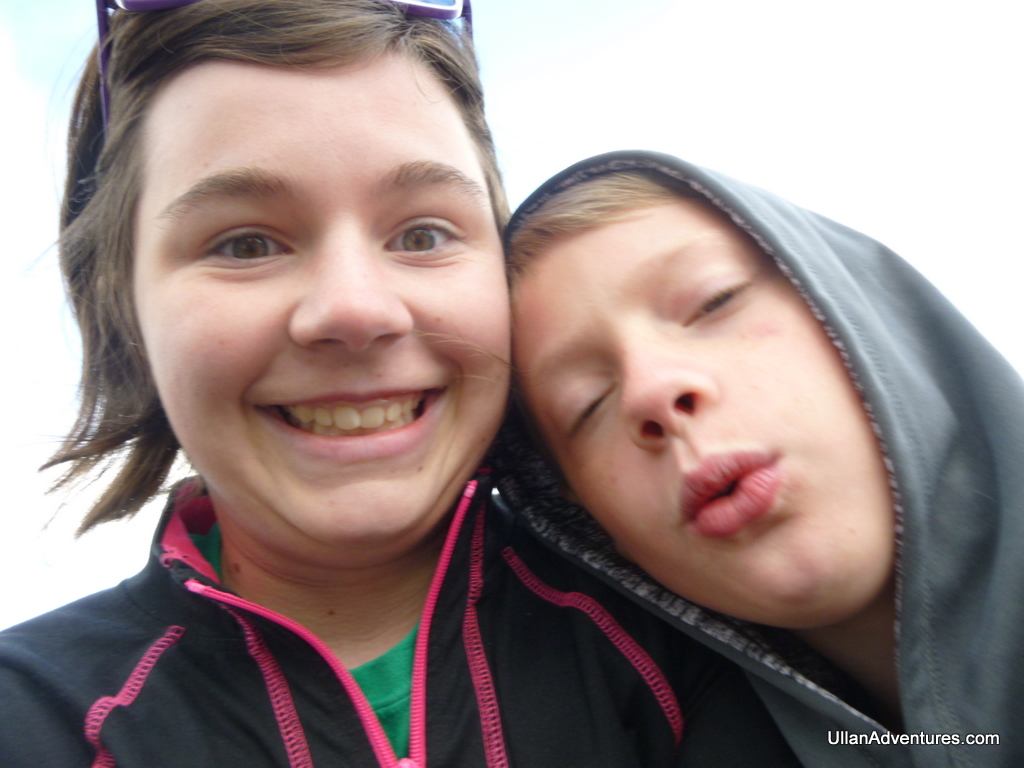 At one point we saw a sign warning not to feed the Dassies.  What on earth is a dassie?  Eventually we found out.  They’re adorable! 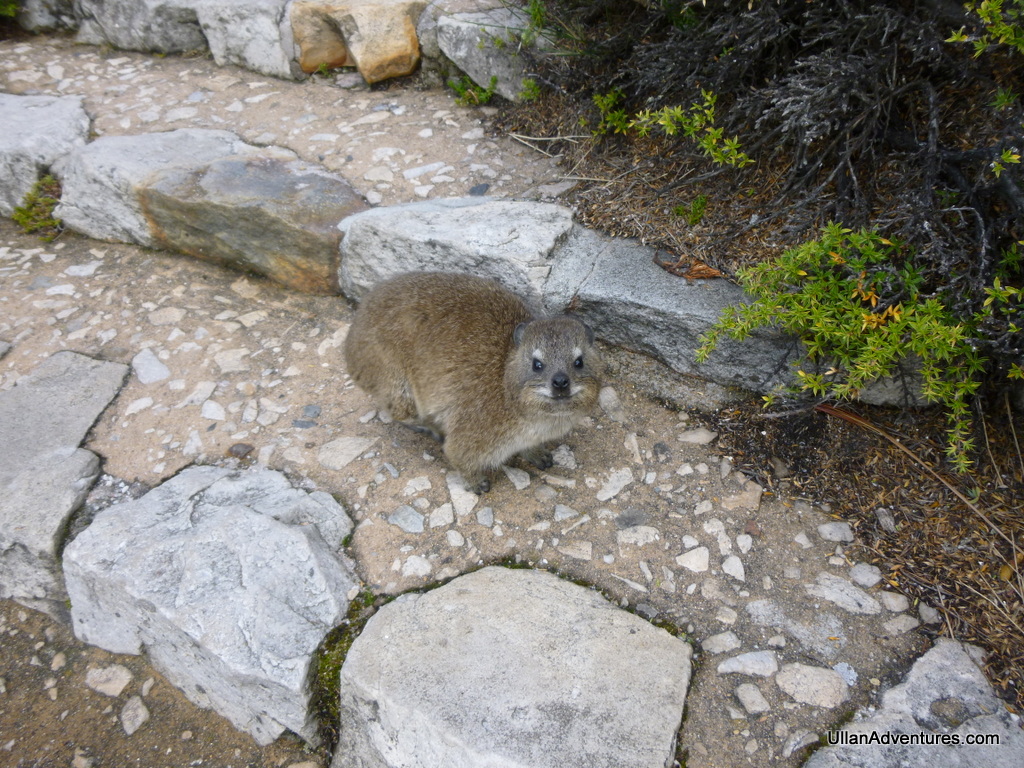 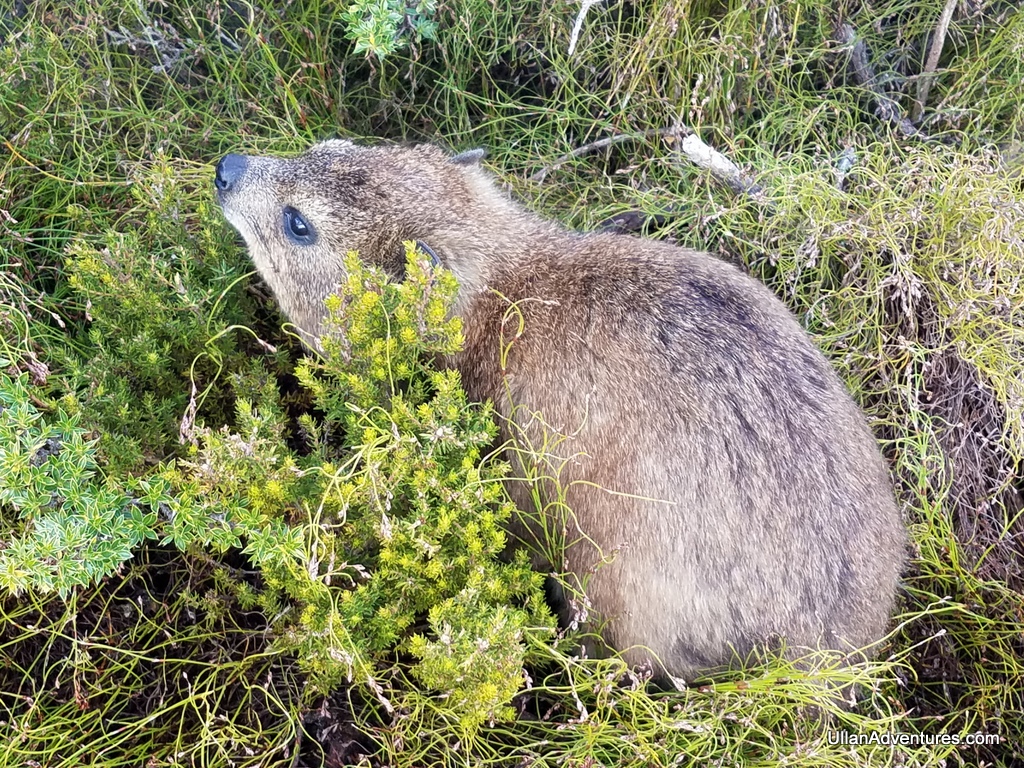 Beckett fell in love with them and bought himself a stuffed dassie to bring home.

After Table Mountain, we grabbed lunch, then headed down to the V&A Waterfront.  The waterfront area has a mall, indoor food stalls, shops, and restaurants.  We ended up picking this pub for dinner and the food was awful, but at least their hard cider was good. 🙂 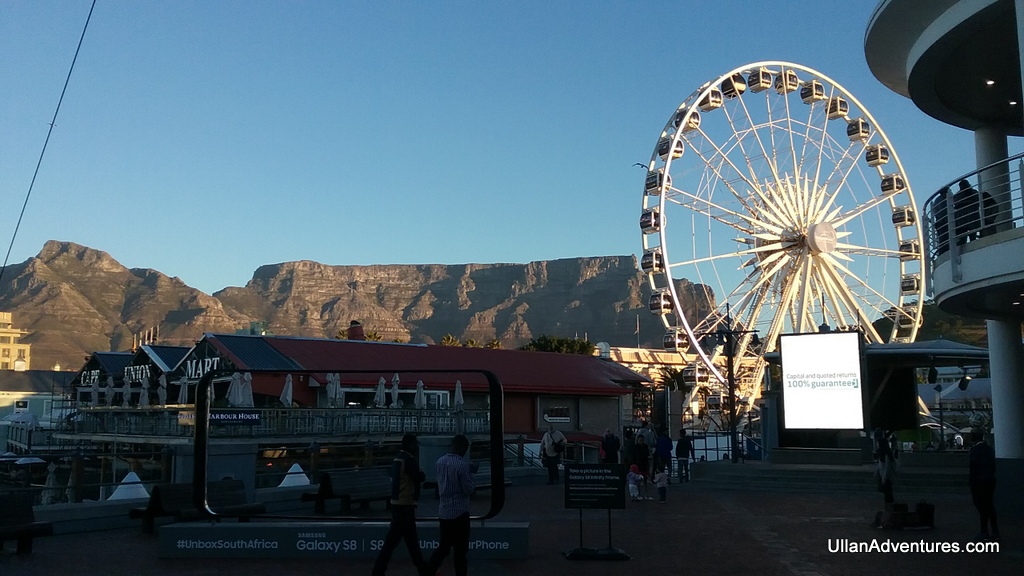 Table Mountain in the distance 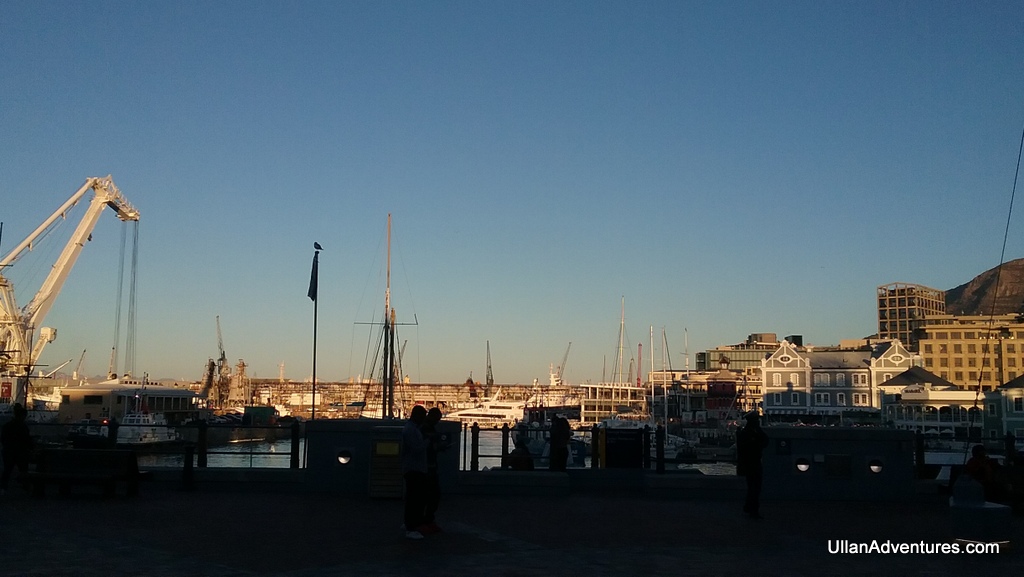 The next morning we were up at 4:30am for our Great White Shark trip in Simon’s Town.  After the shark trip, we had lunch then went to Boulders Beach to see the wild penguins.  Yes, Penguins!  They were adorable.  We saw plenty of baby penguins and saw them wandering around, swimming, and just hanging out.  We even had one “attack” Beckett’s shoe. 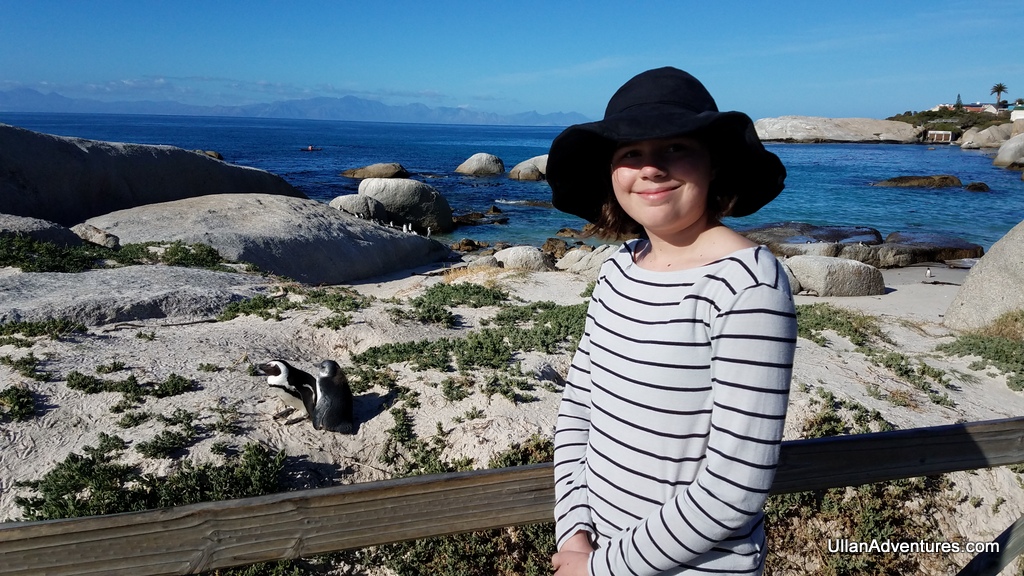 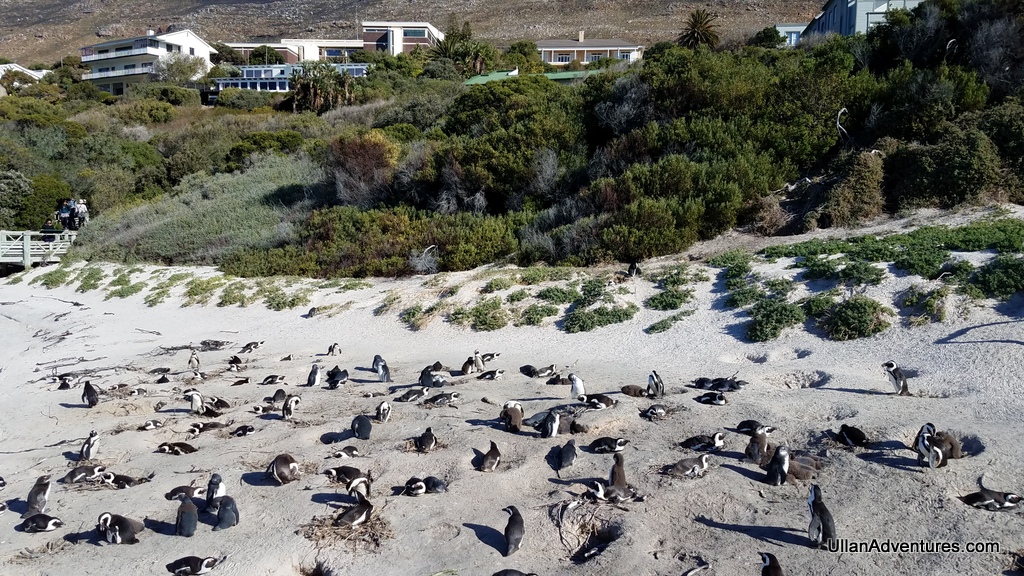 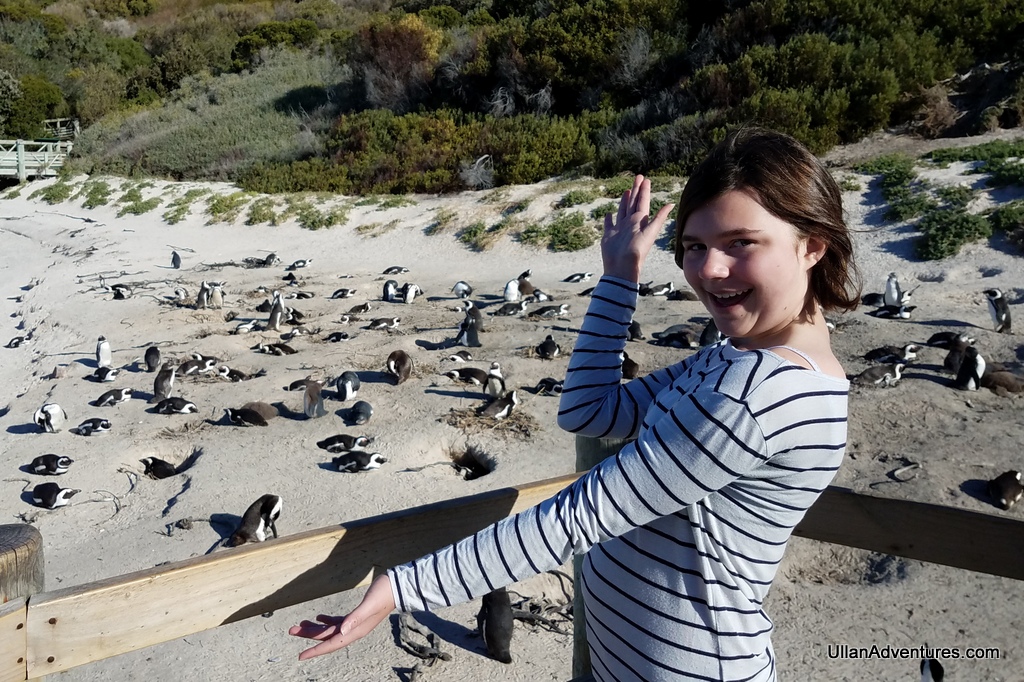 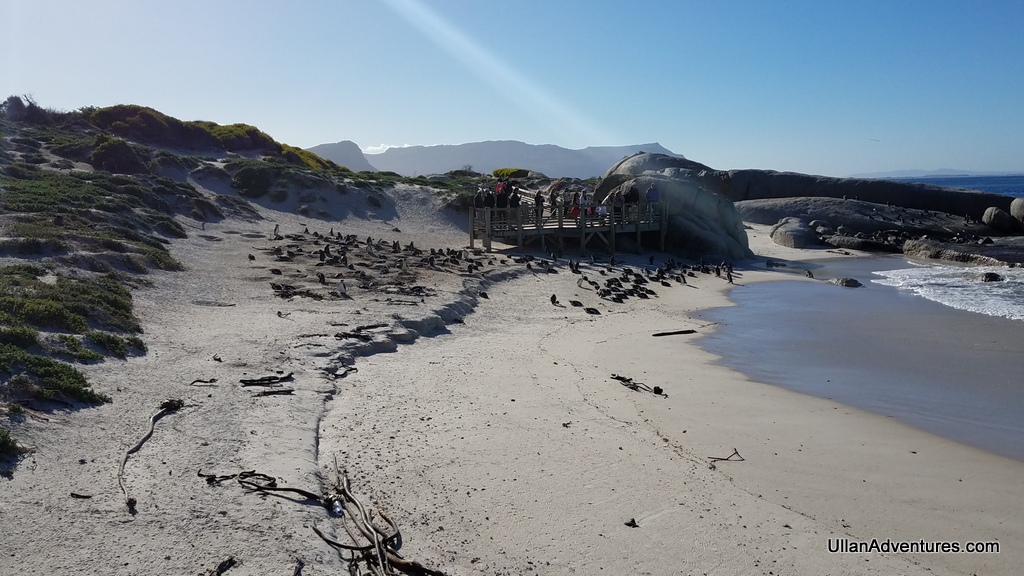 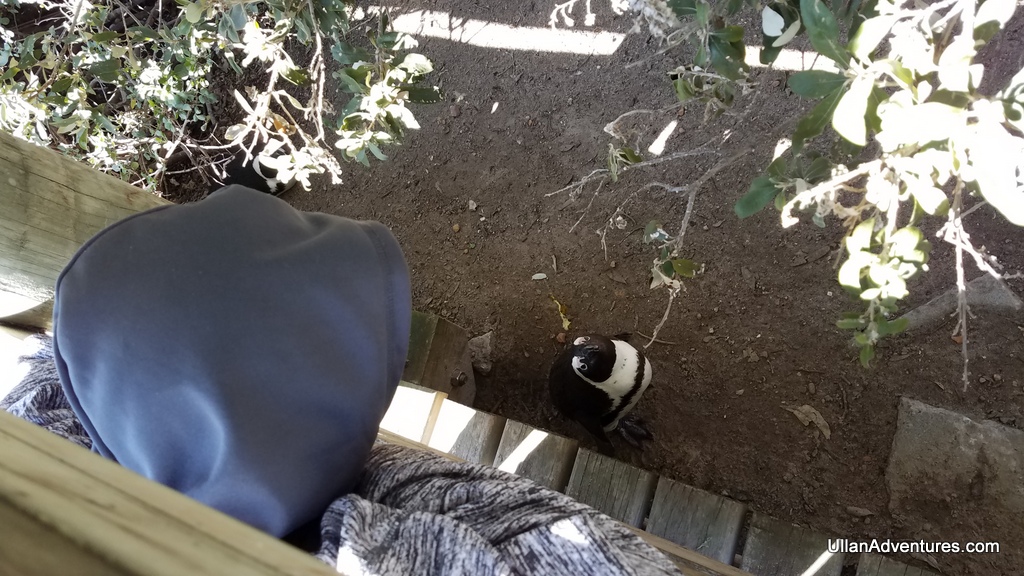 We then headed back to our condo and relaxed the rest of the day as we were pretty exhausted.  Since we didn’t see any sharks, we called the shark company to see if spots were available for the next morning and 2 spots opened up.  So the next morning,  Chuck and I woke at 4:30am and headed back down to Simon’s Town to try to see Great Whites again.  The kids were able to sleep in and had a nice, relaxing morning playing games on their iPads.

Unfortunately Beckett started to not feel well right before we got home and proceeded to throw up once we got back.  The poor kid had a fever and felt awful so that shut down any plans we had for the afternoon.  Mara and I did venture back to the V&A waterfront to wander around and have a snack.  And later Chuck and Mara went out for dinner and brought me home food so I could stay with Beckett.  It wasn’t exactly how we expected our last day to go, but such is life.  And at least we got to do all the things we REALLY wanted to do.

Luckily Beckett was well enough the next morning for our flight to Kruger.  It still took him 2-3 days to get fully better, but at least he could travel.

Overall, I went into Cape Town with high expectations and came away disappointed.  I thought I’d fall in love with the city, but I didn’t.  It was pretty, and I could see how fun it’d be during the summer.  I think Chuck and I would’ve enjoyed it more if we had gone to Stellenbosch to go wine tasting or driven down to the Cape of Good Hope.  Don’t get me wrong, I did enjoy my time there and am very happy we went.  But I left not really ever needing to go back.Save