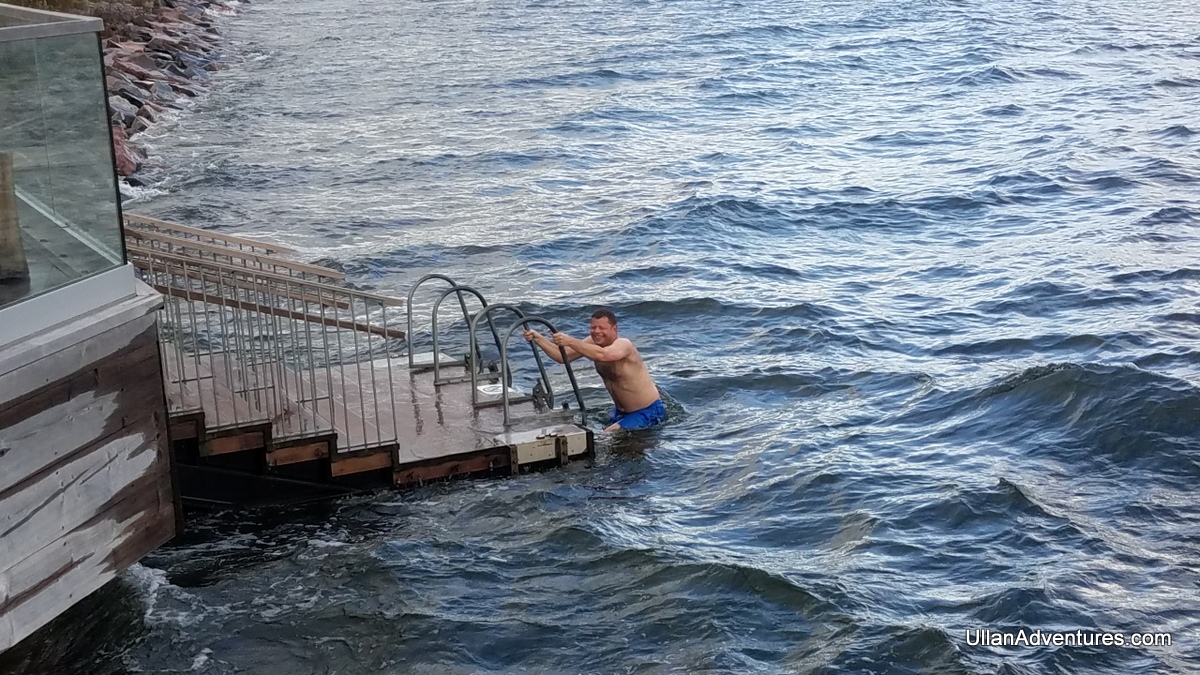 Helsinki was our last stop on our 10 day Baltic blitz trip.  We arrived via ferry from Tallinn early in the morning.  When I say ferry, I should say small cruise ship as it was far more like a cruise ship than a typical ferry.  The ferry had multiple restaurants, a bar, and sleeping cabins across multiple levels.  I was a wreck on the ship as I had barely slept the night before, but managed to catch a quick nap after having some breakfast.  The seas were a little rocky, but napping and ginger candies helped me not get too motion sick.  The crossing only took about 2 hours so it was still pretty early when we arrived. 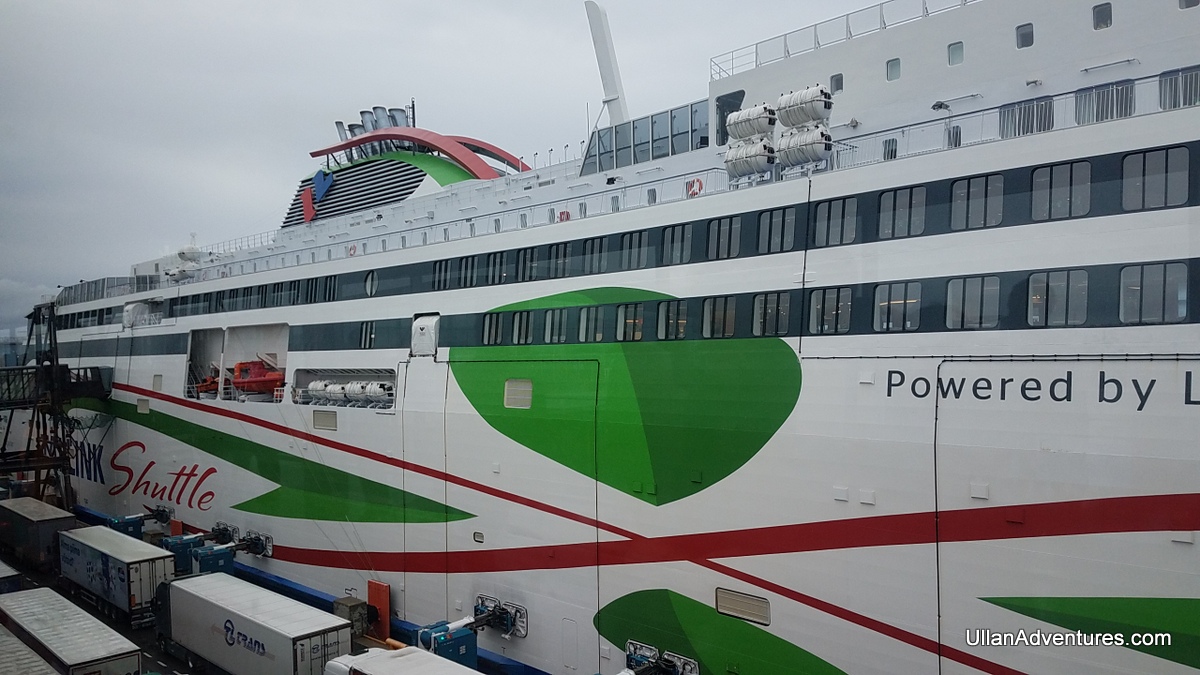 We took a taxi to our hotel, Hotel Fabian, and luckily they had our room available even though it was barely 10am.  As much as I wanted to go out and explore, I desperately needed sleep so I took a couple of hour nap before we headed out for lunch.

Our first stop was to the Central Market along the waterfront.  We were able to find some lunch at one of the food stalls – moose meatballs for Chuck and yummy salmon fish and chips for me.  My legs were still shot so Chuck wandered down to the Uspenski Church while I rested.  We then wandered around the market and bought each of the kids a stuffed animal, a reindeer and a moose. 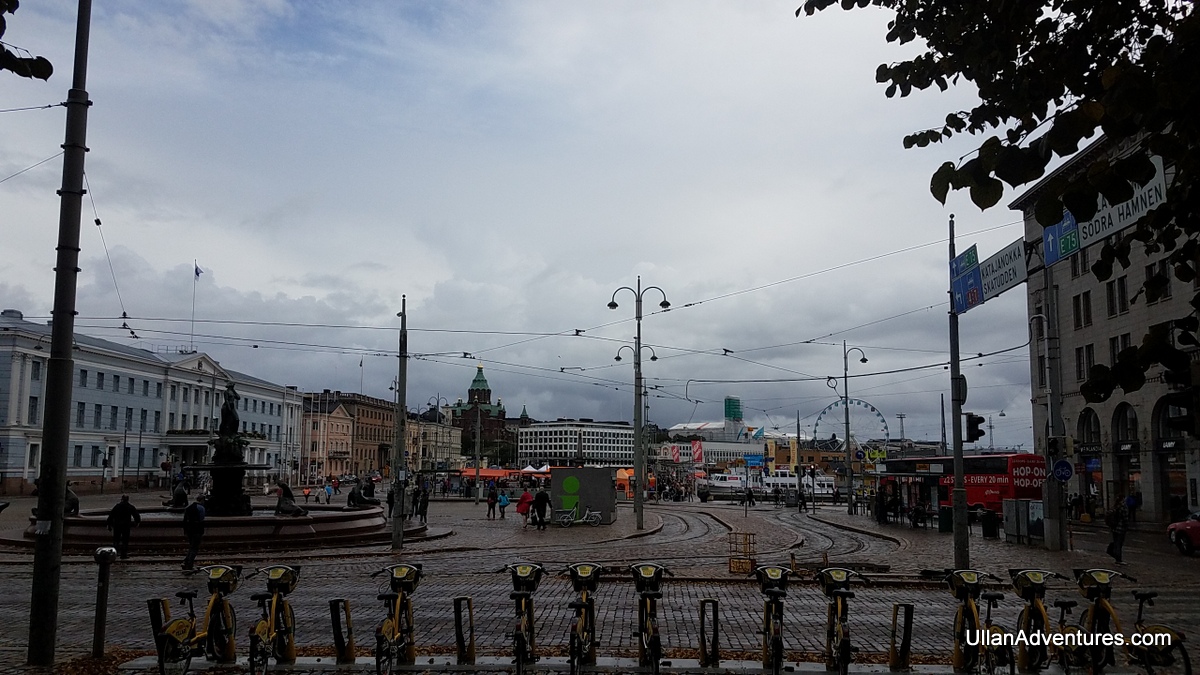 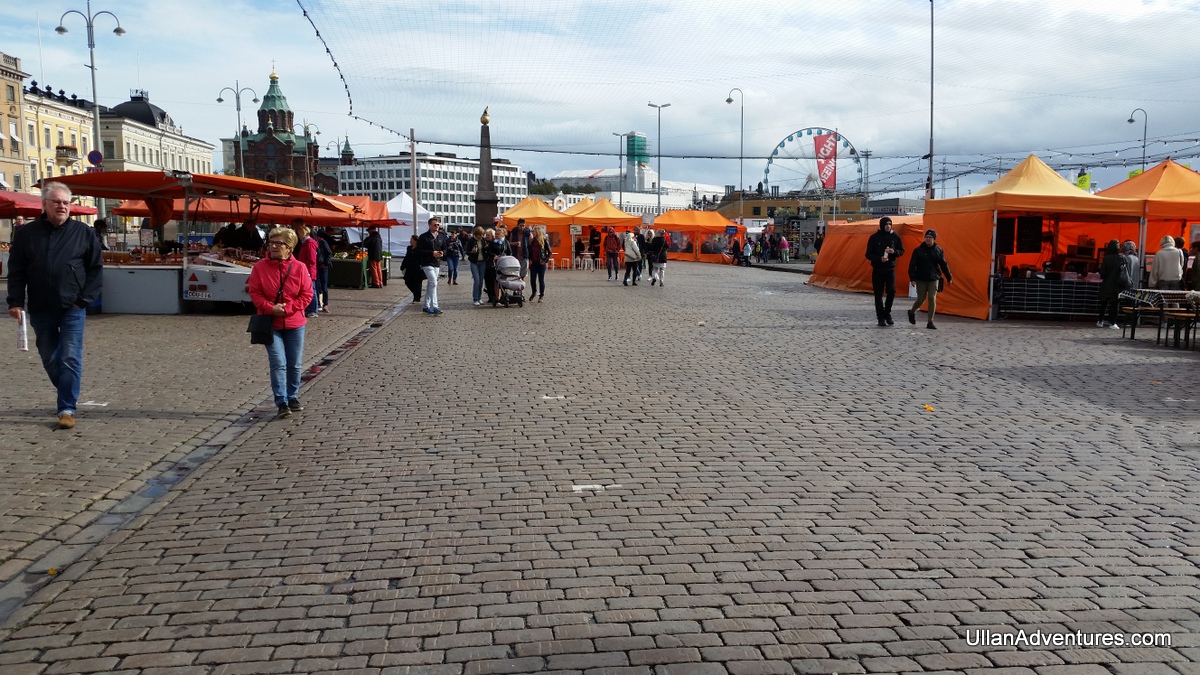 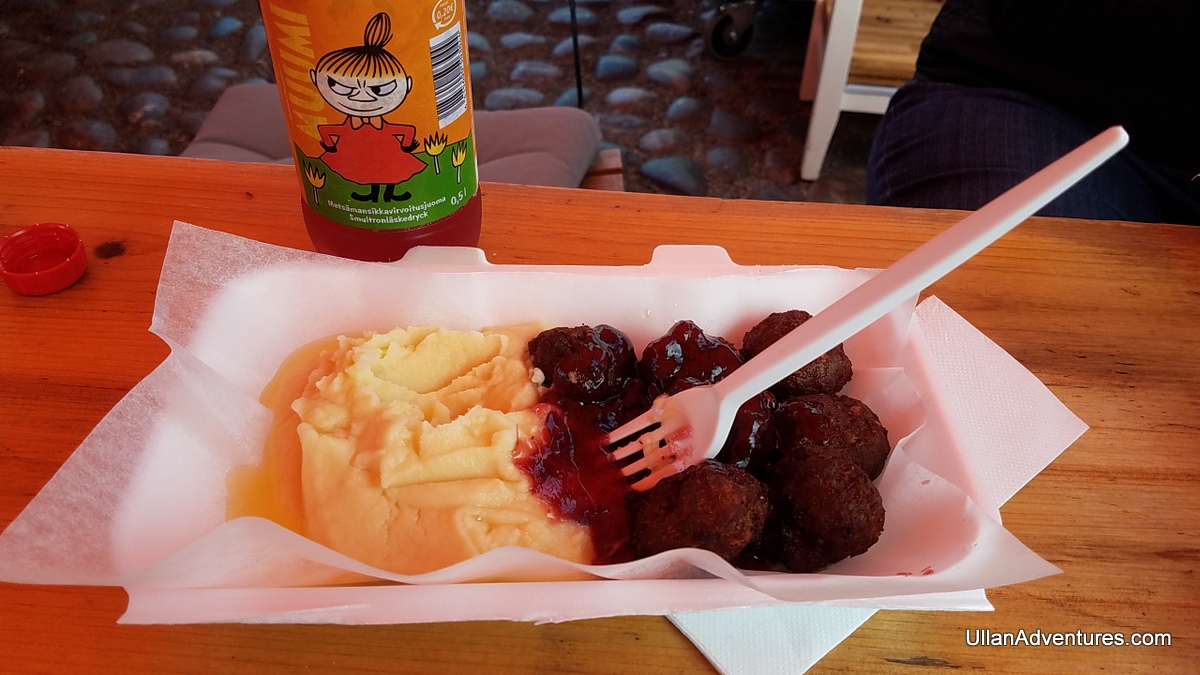 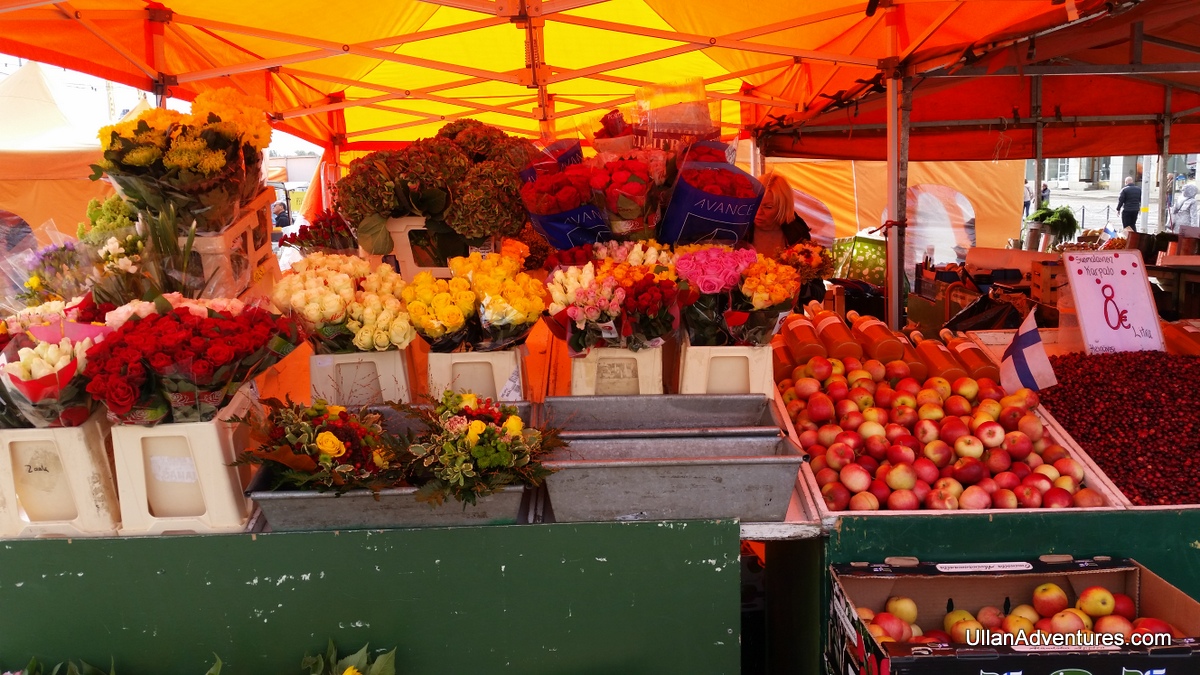 We then swung by the Helsinki Cathedral before walking down the Esplanade.  We also found some cool stores to do some shopping, mostly for Christmas ornaments. 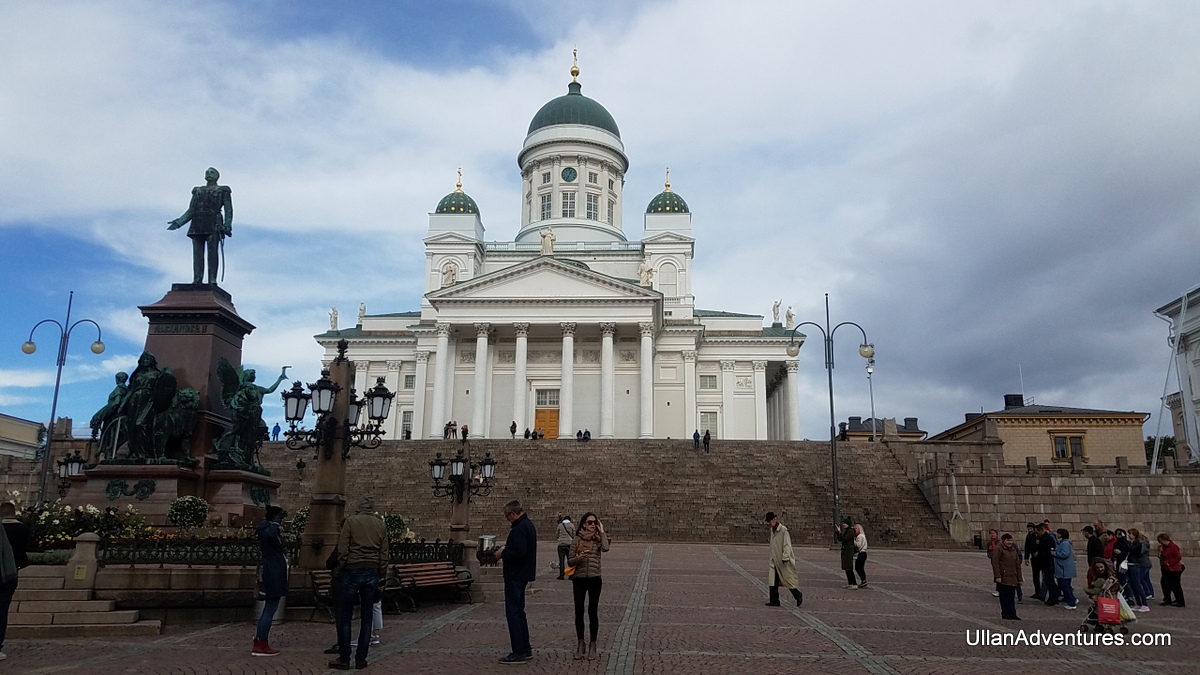 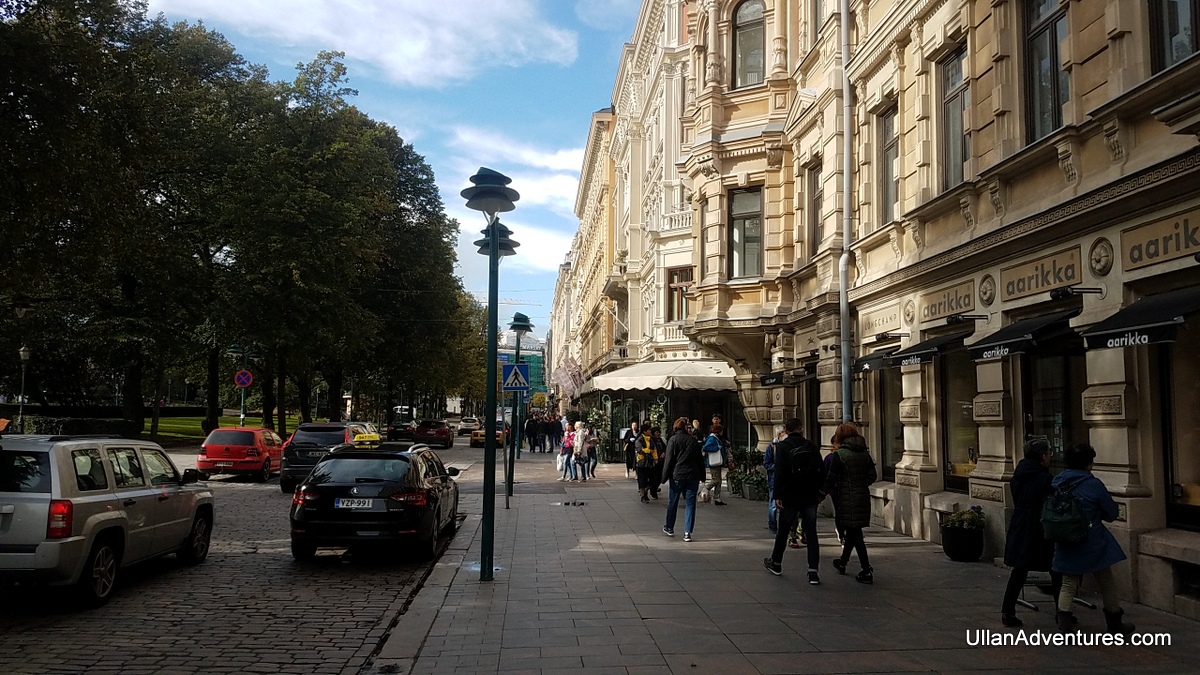 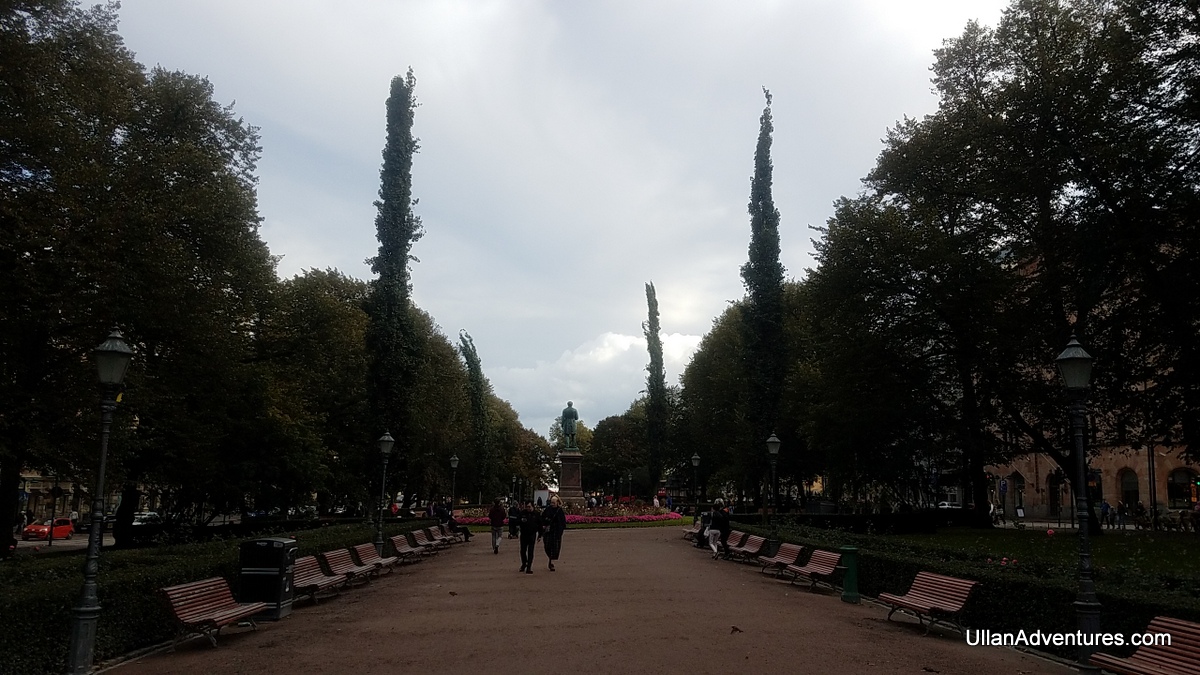 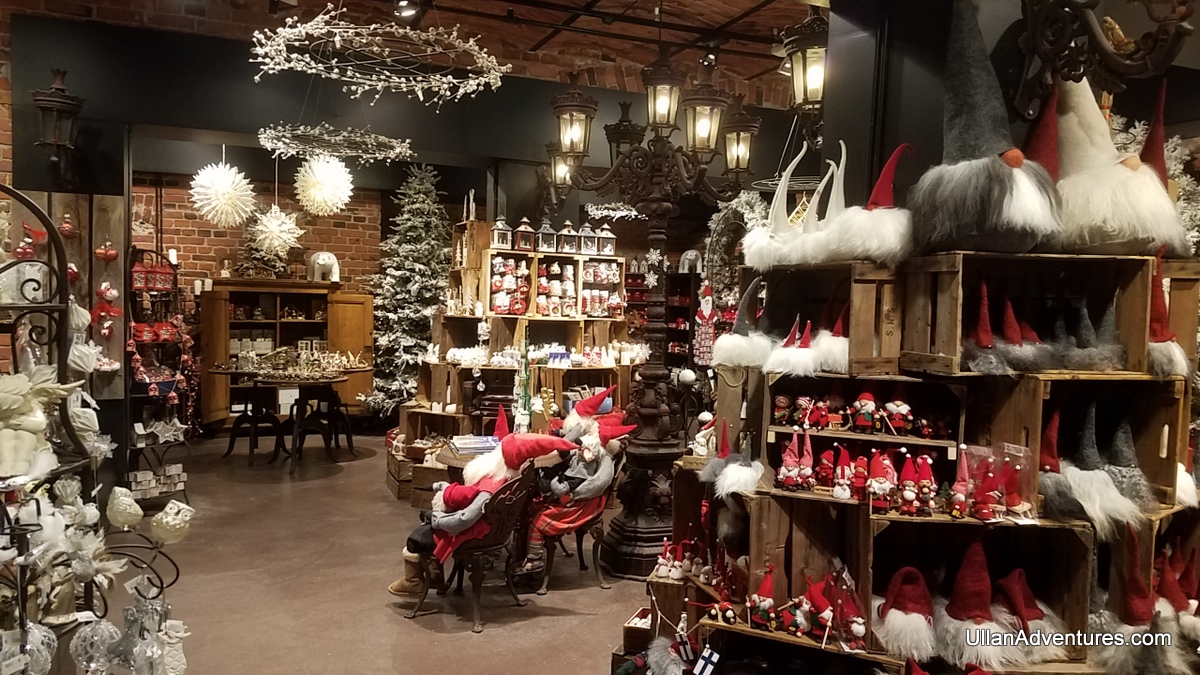 I wanted to buy so many Christmas things at this store!

Then it was time for a traditional Finnish sauna experience!  I found a place in Helsinki that has both the traditional smoke sauna and a wood-burning sauna.  And it was open for men and women at the same time (many of them are open for women at one time and men at another). 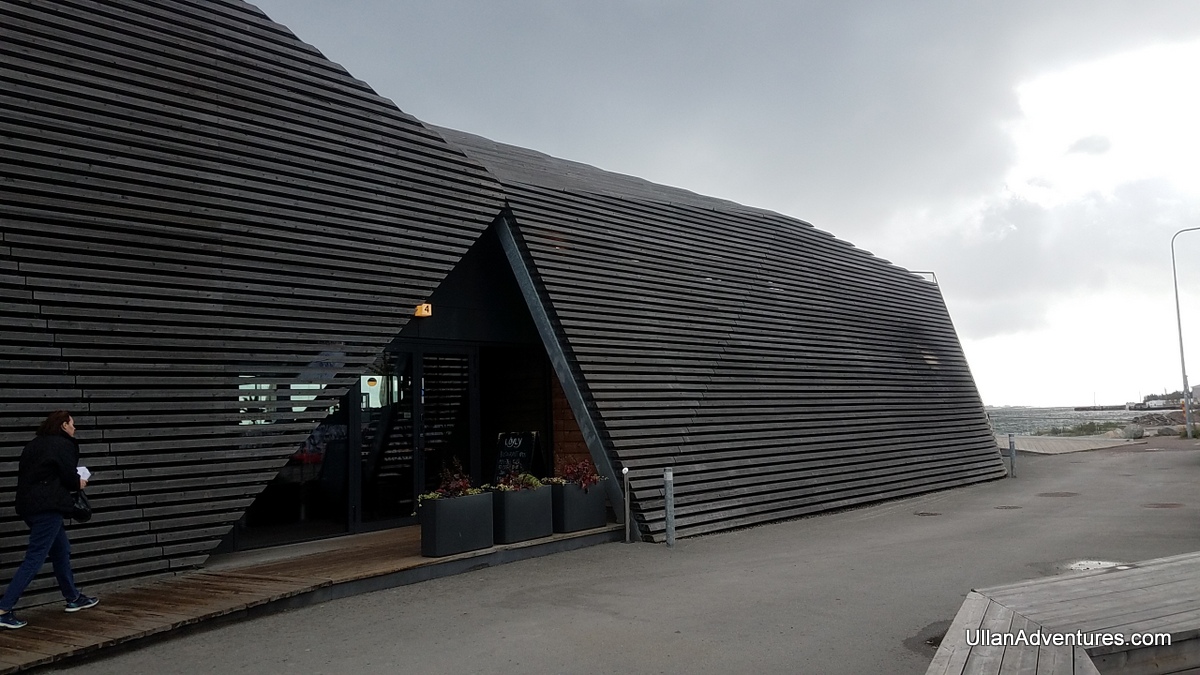 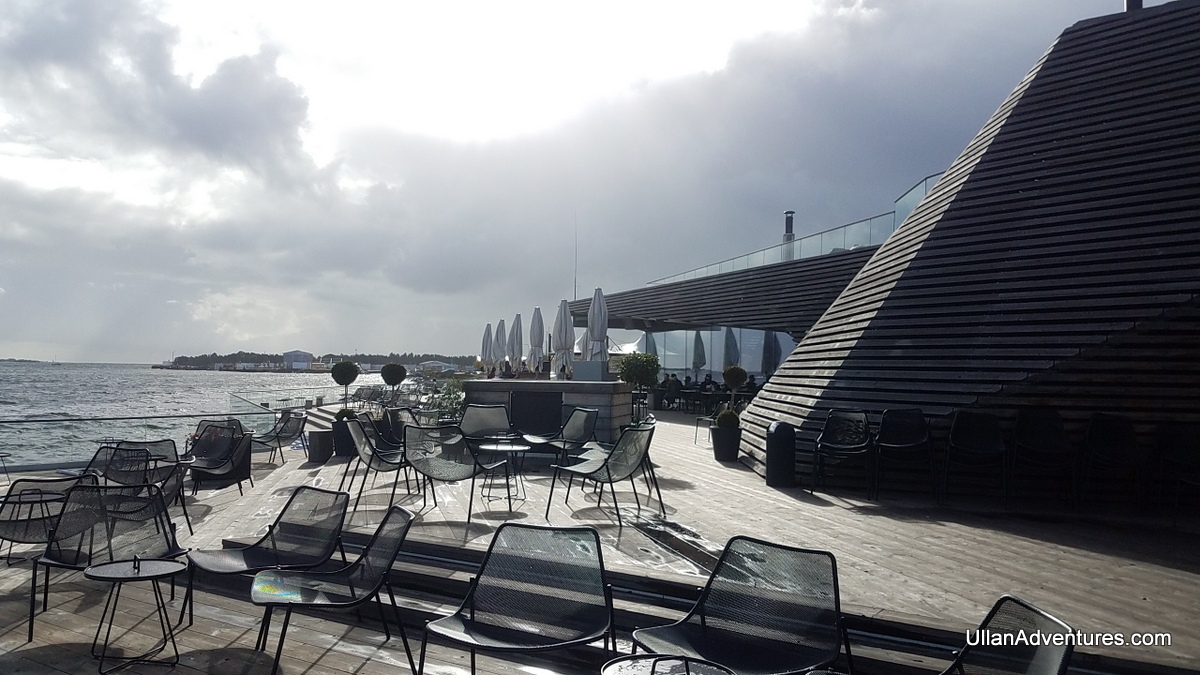 This place was really cool.  After getting changed in either the men’s or women’s locker room, you are supposed to shower naked before going outside and into one of the 2 saunas.  It was cold and raining that day so it was quite unpleasant being outside in only a swimsuit.  But the saunas warmed you up quickly.

We headed for the traditional smoke sauna and boy was it hot.  I mean hotter than I think I’ve ever felt even in other saunas.  And the smoke was heavy as well, but you could still breathe OK.  After a bit in there, we headed back out to the cold, got a glass of water, then headed for the wood-burning sauna.  After a bit in there, it was once again back into the cold for some water and back into the first sauna.  Rinse and repeat.  After a while, I was done so I sat around a wood burning fire and chilled – literally – while Chuck did more sauna time.  Then I got dressed and left him to keep going back and forth.

He decided to go full traditional Finnish style and take a dip in the icy Baltic Sea in between sauna visits.  I did put my feet into the water, but that was all I was going to do.  Brrrr. 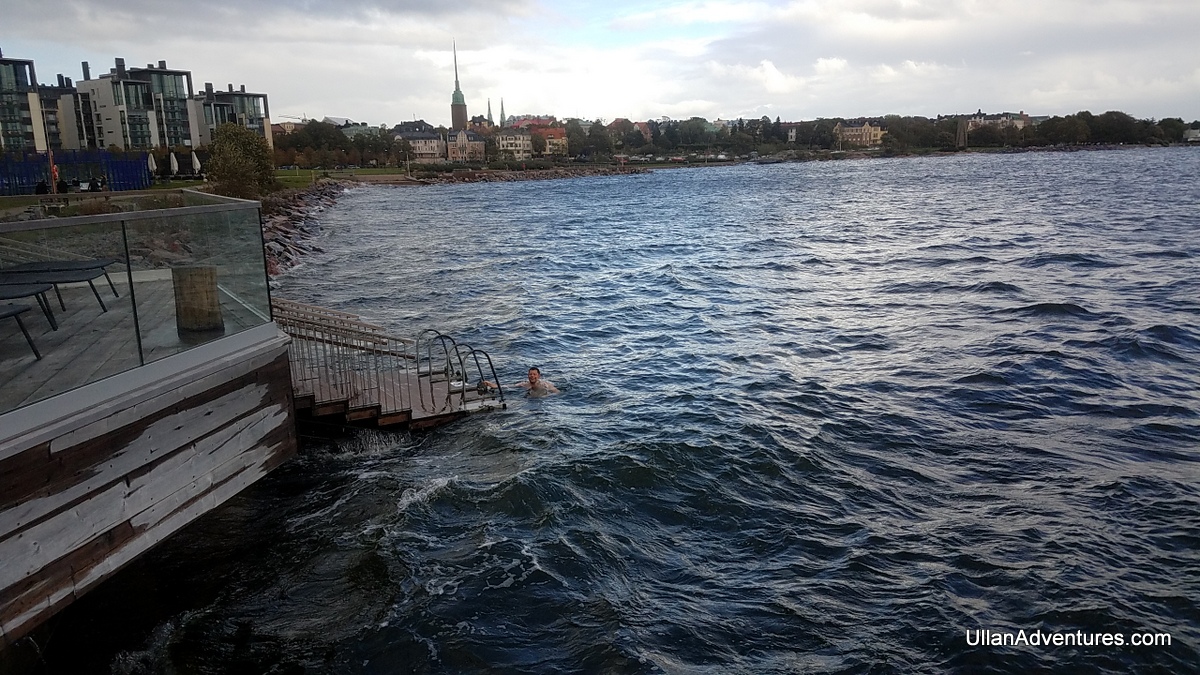 Chuck submerged in the Baltic Sea 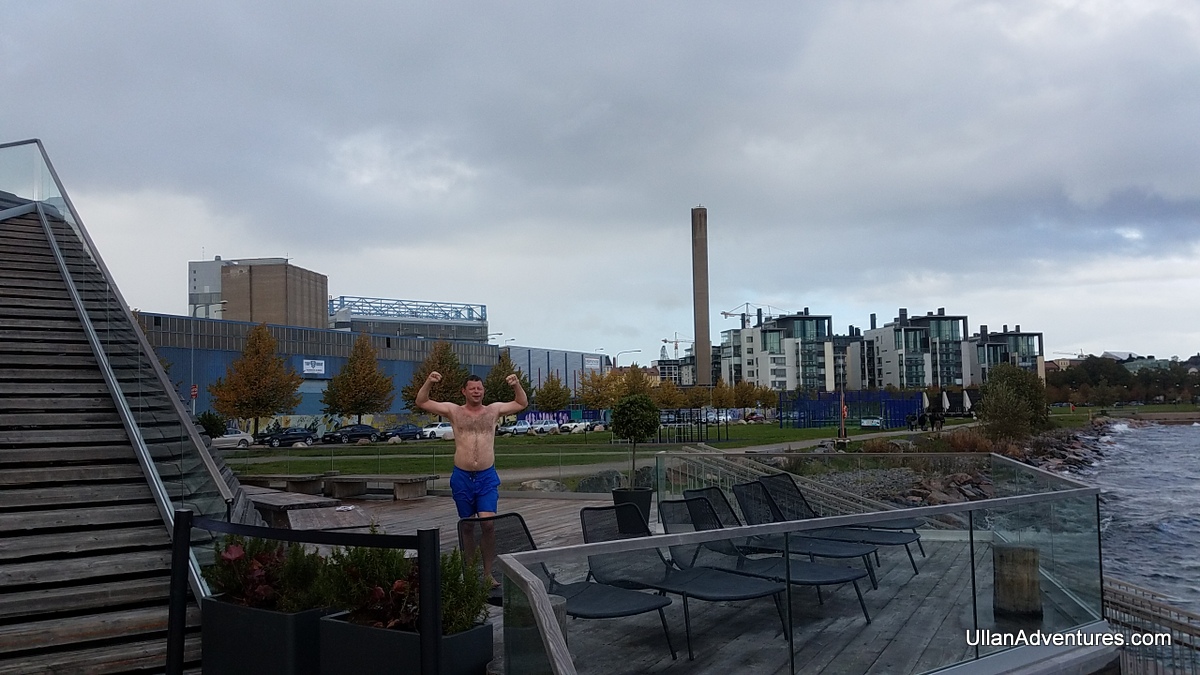 As he kept going to the saunas, I went into the restaurant and enjoyed a delicious bowl of salmon soup and a coffee while enjoying the great view outside.

After taxiing back to the hotel and getting cleaned up, it was time for dinner.  Chuck found a steak restaurant nearby that sounded good, and when I looked it up, I realized it was owned by Stefan Richter whom I used to watch on Top Chef!  I was really excited to get to eat his food!

I ordered a local Finnish steak and Chuck went for a reindeer steak.  My steak was the best I’ve ever eaten.  The meat is so much better than what we get in the US with this amazing flavor and texture.  Chuck loved his reindeer as well. 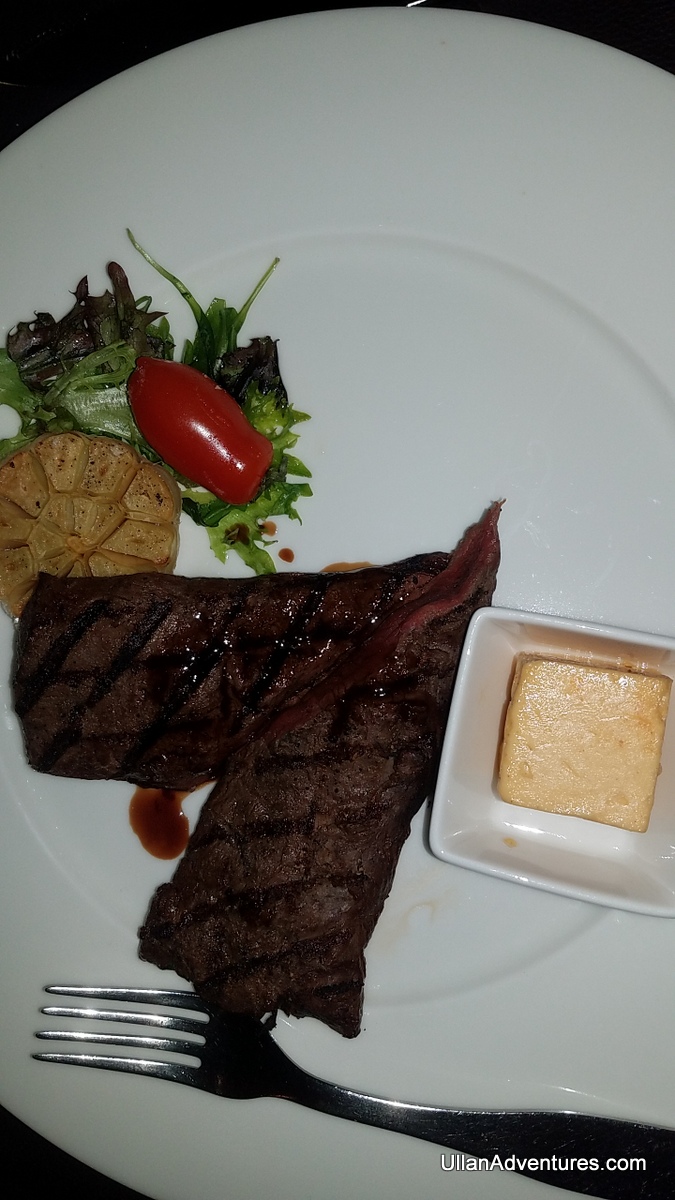 On our way out, I saw Stefan at the bar and then he walked past me and left the restaurant.  As we walked out, he was sitting outside and started chatting with us.  He ended up talking to us for a good 10 minutes and we learned so much about his restaurants and what he’s up to.  It was such a cool experience!!

The next morning we only had time for a quick walk back to the harbor, briefly checking out the Old Market Hall, and taking a few more pictures before it was time to head to the airport. 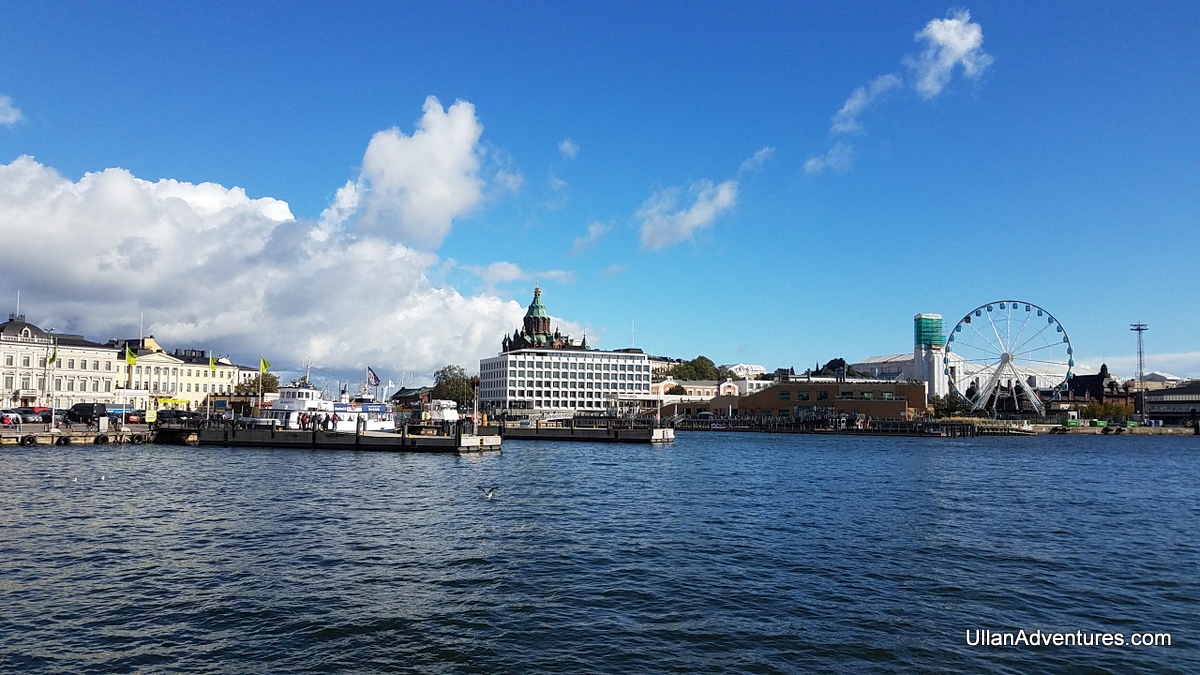 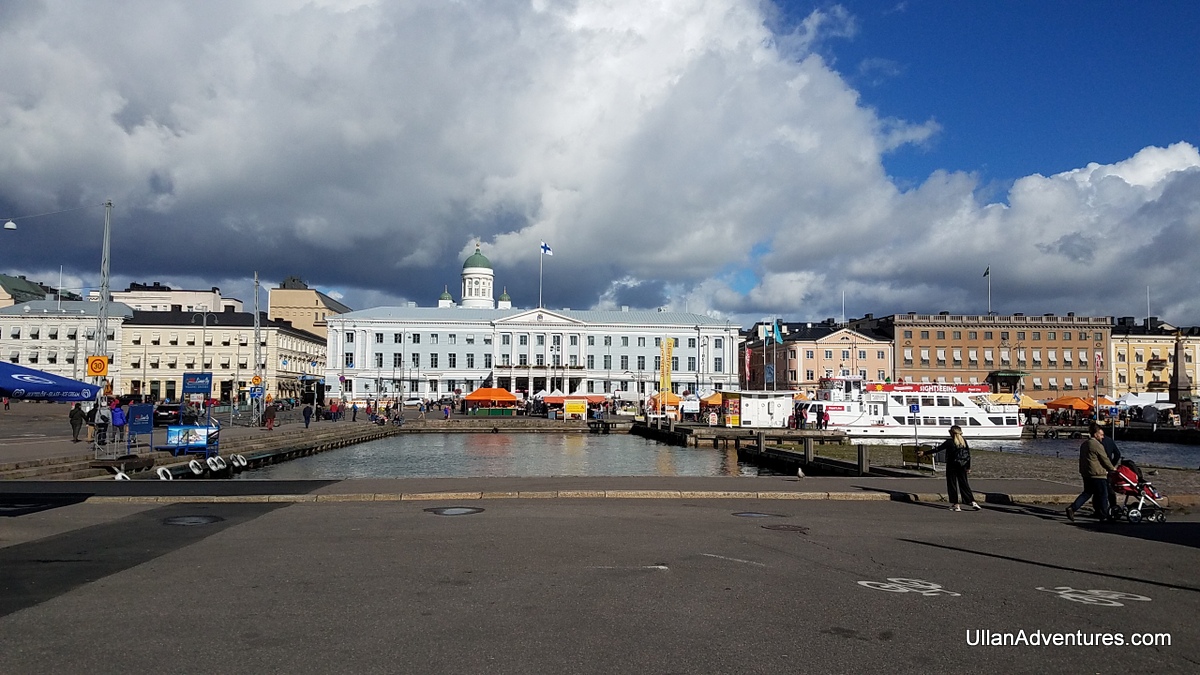 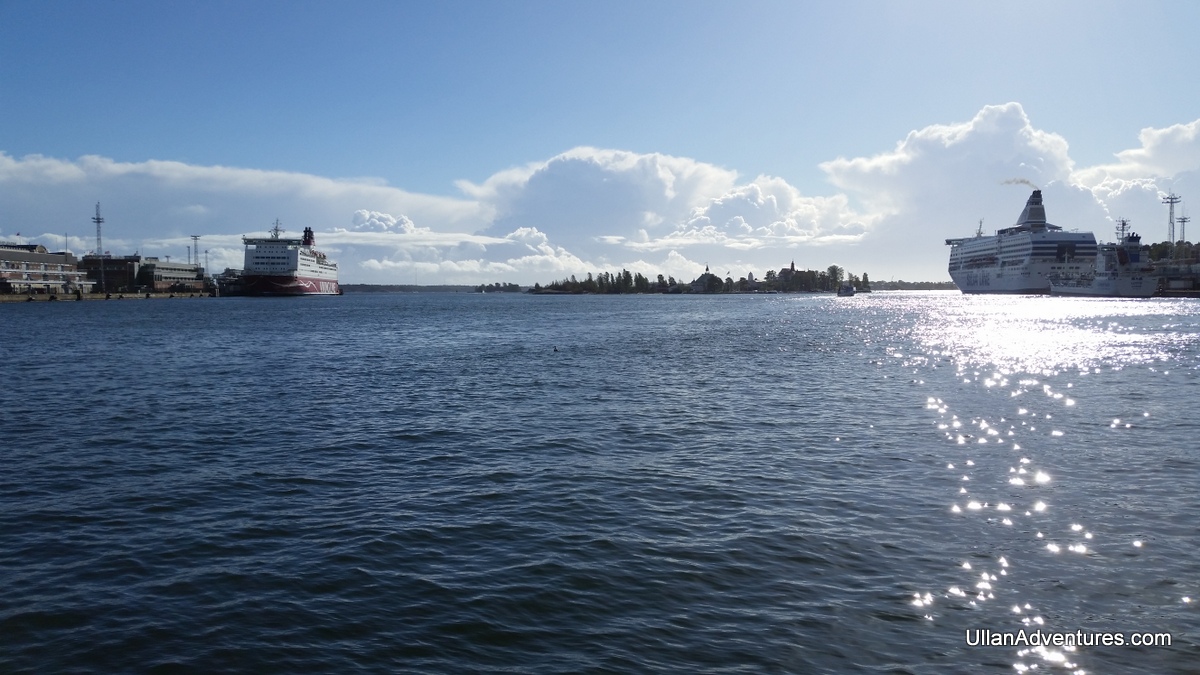 At the airport we had to get another meal of meatballs with lingonberries that we had when we arrived and once again they did not disappoint.  Best airport food I think I’ve ever had.

And then we started our trip back to the US (via Reykjavik).

All in all our Baltic trip was amazing AND a complete whirlwind.  We were barely in any place more than 48 hours and packed in 5 countries in 10 days with a stop in Iceland on each side.  We’re used to packing in a ton, but this time I think we overdid it especially when I take in consideration the good month or two it took for my legs to stop hurting (no joke!).  BUT I loved all we saw and did and experienced, so it’s hard to regret any of our choices.  And I loved everywhere we went and feel so lucky that we got to experience that part of the world!