A couple of years ago, I was watching a travel show where the guy showcased food from Osaka and other places around Japan.  Beckett got really excited and said that he wanted to go there to try the food they were showing, and boom, a travel plan was born.  Chuck and I had previously talked about going to Japan, but hearing Beckett’s interest made us decide it would be our next big trip.

After a year and a half and a ton of planning, we were off. 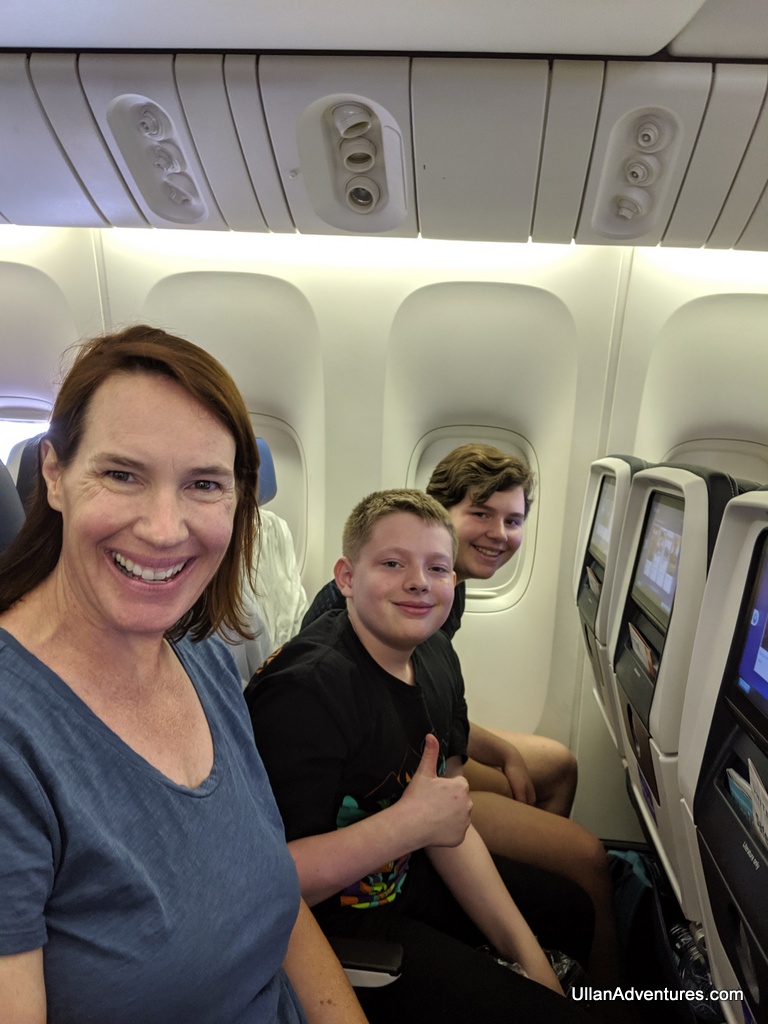 Chuck arranged for a driver to pick us up at the airport and take us to our rental.  It was actually very cost effective compared to the cost of all 4 of us having to take the train to the metro.  And it was so nice to not deal with any logistics when we arrived all tired and jet lagged from the flight.

We had a slight issue getting into our rental as we first couldn’t  locate the lockbox and then the code they gave us didn’t work.  Eventually we got in and were able to drop off our stuff, before heading out for some dinner. 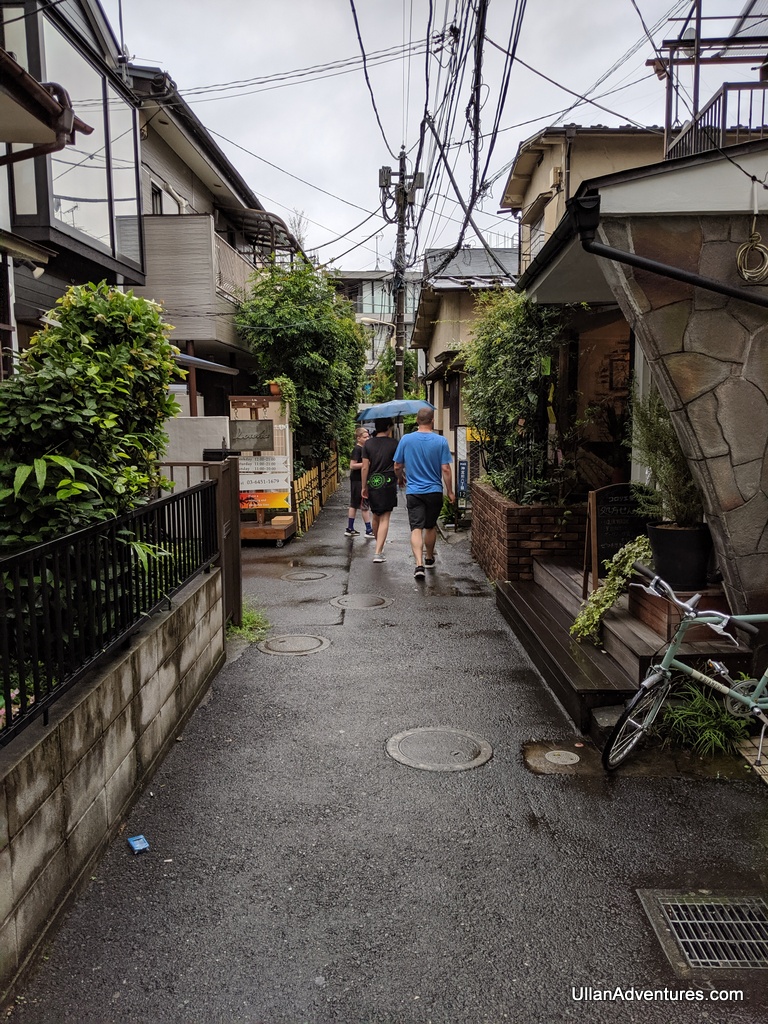 Street our rental was on 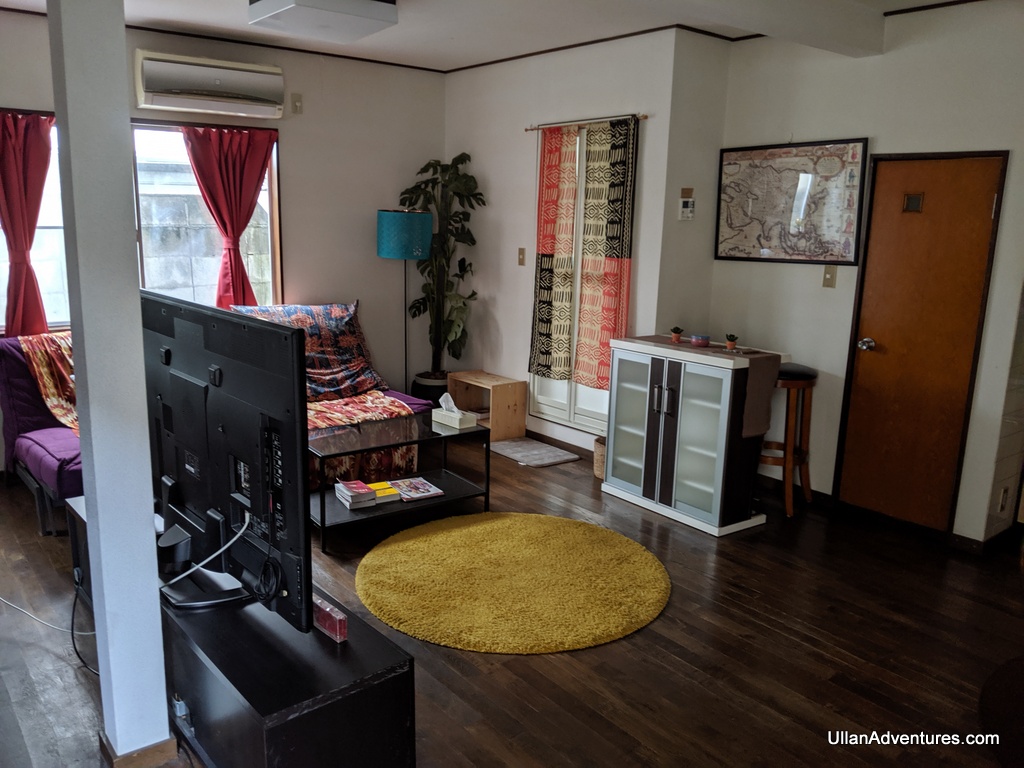 Our rental was such a great find!  It was a 3 bedroom 2 story house only a few blocks from Harajuku.  And it cost less than a hotel room would’ve been.  Add in that it had a kitchen and a washing machine and it ended up being such a great choice for us.

For dinner, we found a cute little ramen shop a few blocks from our rental.  We first waited for a table to become available, then ordered our food from a vending machine type machine out front.  Then we sat down, handed them the tickets from the machine, and received our food.  It was delicious! 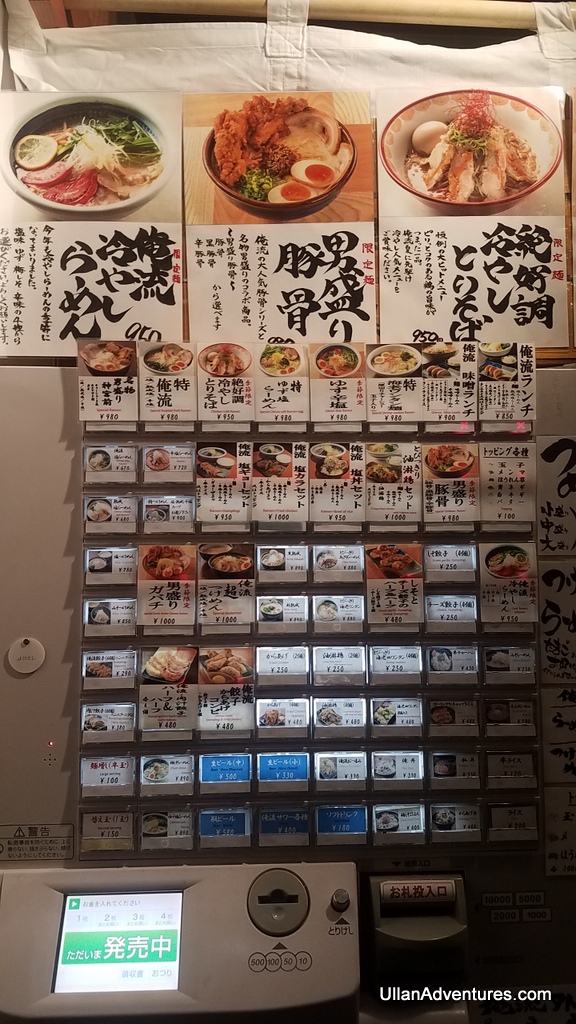 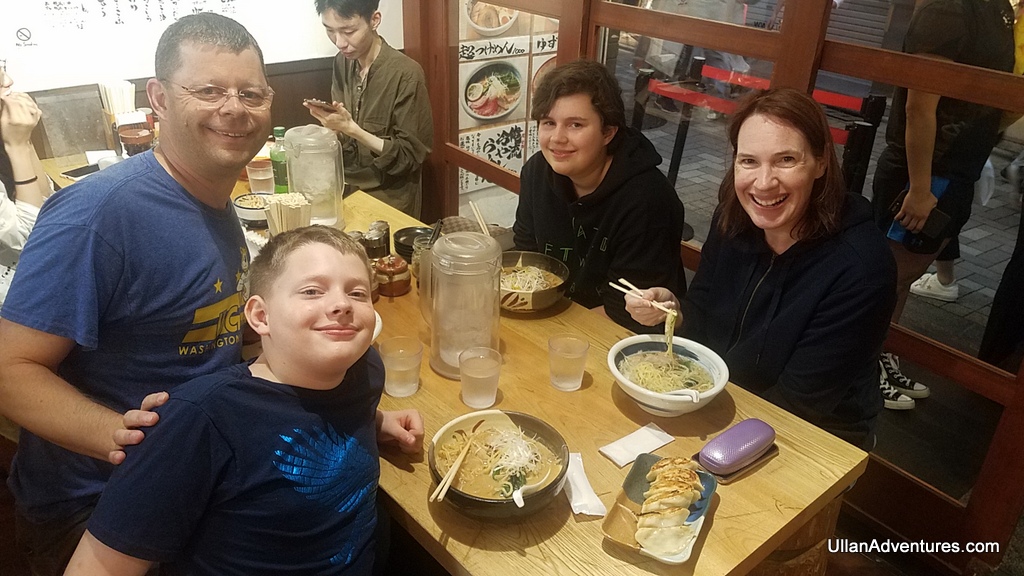 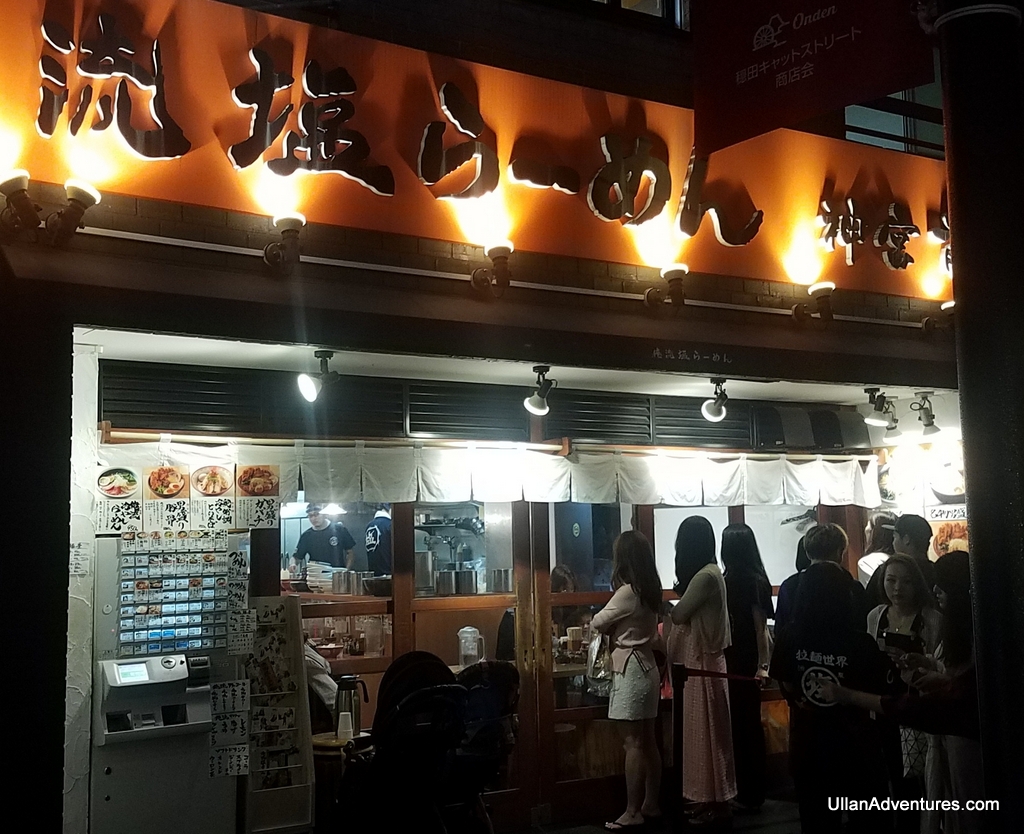 Then we hit a mini mart to stock up on breakfast foods and headed back to our rental for some much needed rest.

The next morning we were all awake by 4am, but having our instant Starbucks coffee and some breakfast foods made that better.

It was strangely rainy and cool the next morning when we headed to Harajuku.  We had breakfast at this Kona themed restaurant that was exactly what we needed. 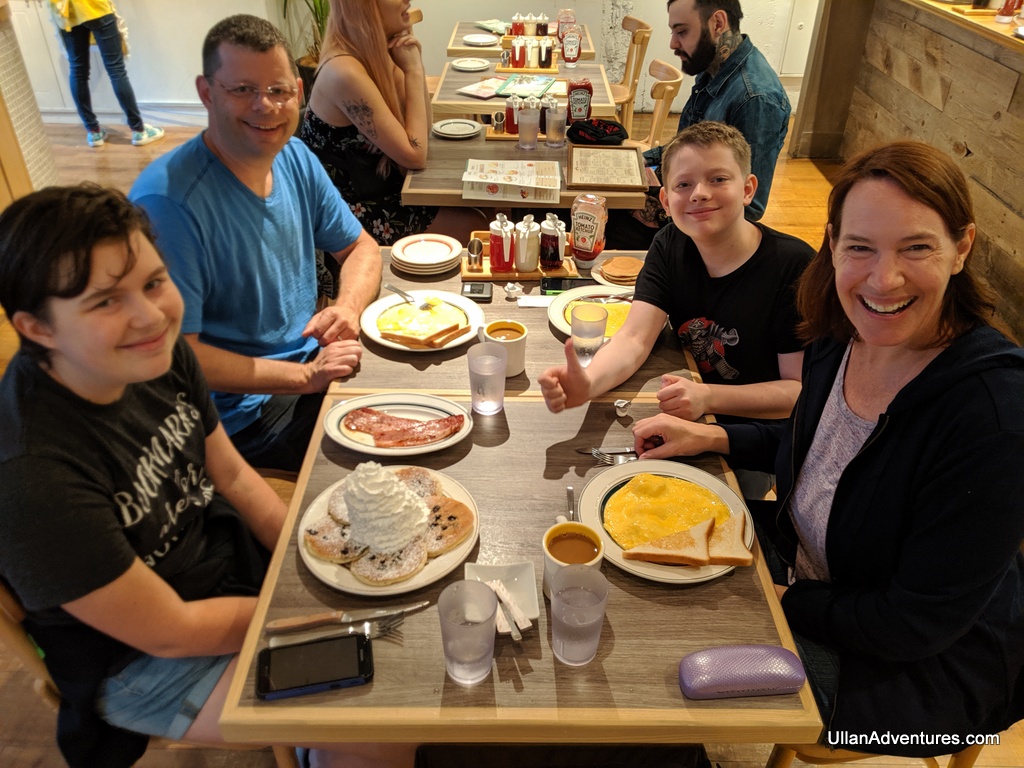 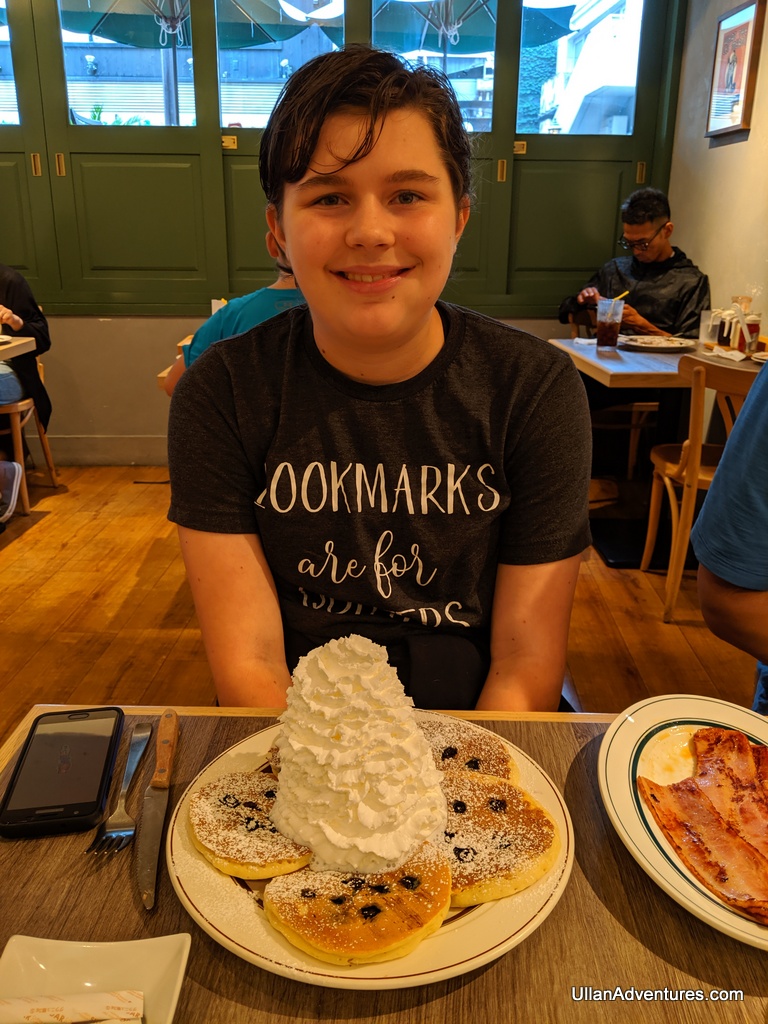 Look at the mountain of whipped cream on her pancakes!  They were as good as they looked.

After breakfast, we wandered the famous Takeshita Street in Harajuku, but unfortunately it was too early so many things weren’t open yet.  The rain and cool weather didn’t help either.  Since our rental was so close by, we were able to go back a couple more times and found it jammed packed and far more like we expected. 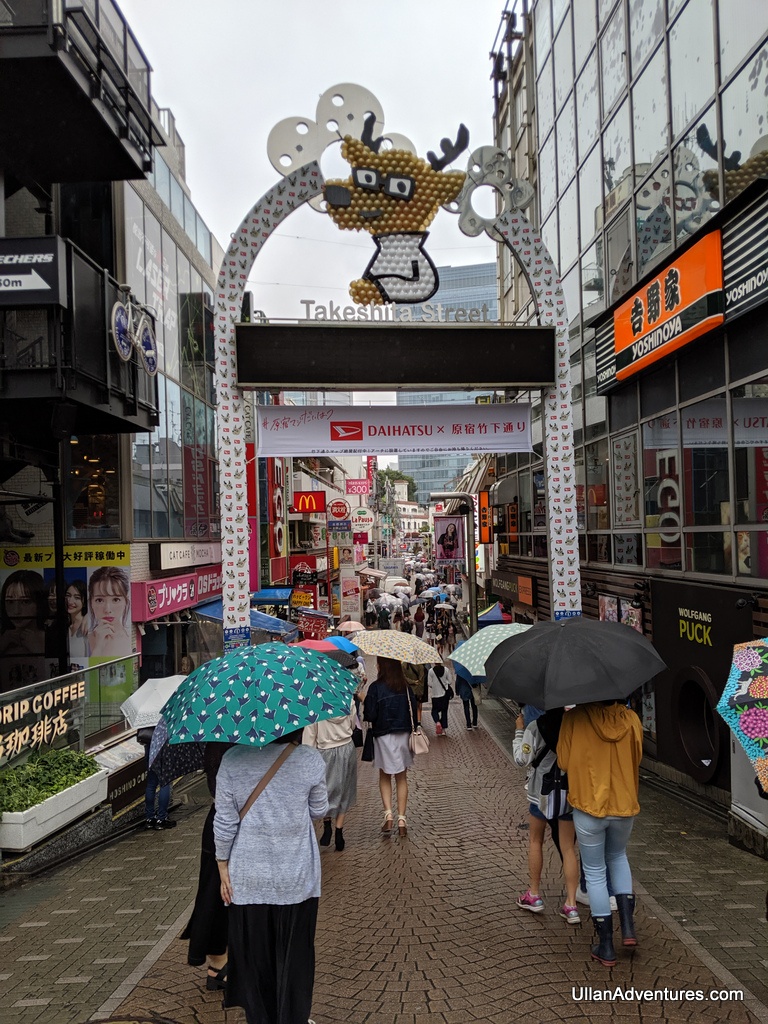 After walking thru Harajuku, we walked over to Meiji Shrine.  Meiji Shrine is a Shinto shrine set in a forest.  Its a good 10-15 minute walk from the park entrance to the shrine.  Along the way there are some torii gates and some really cool sake barrels and it was quite relaxing being among the trees in the heart of Tokyo. 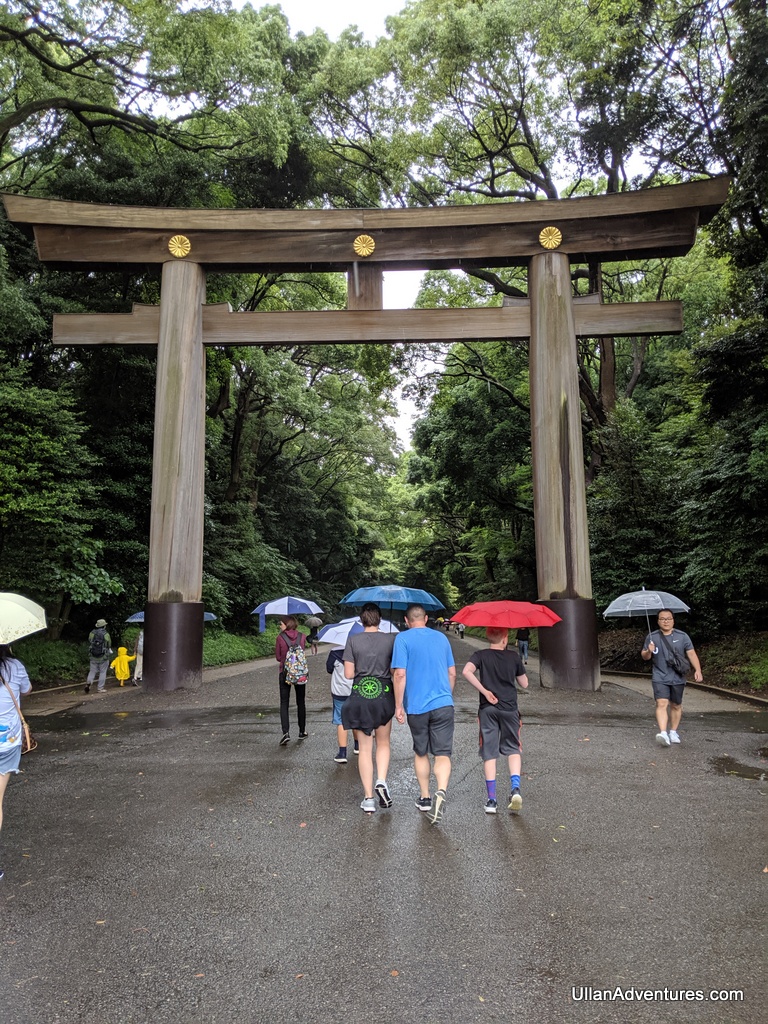 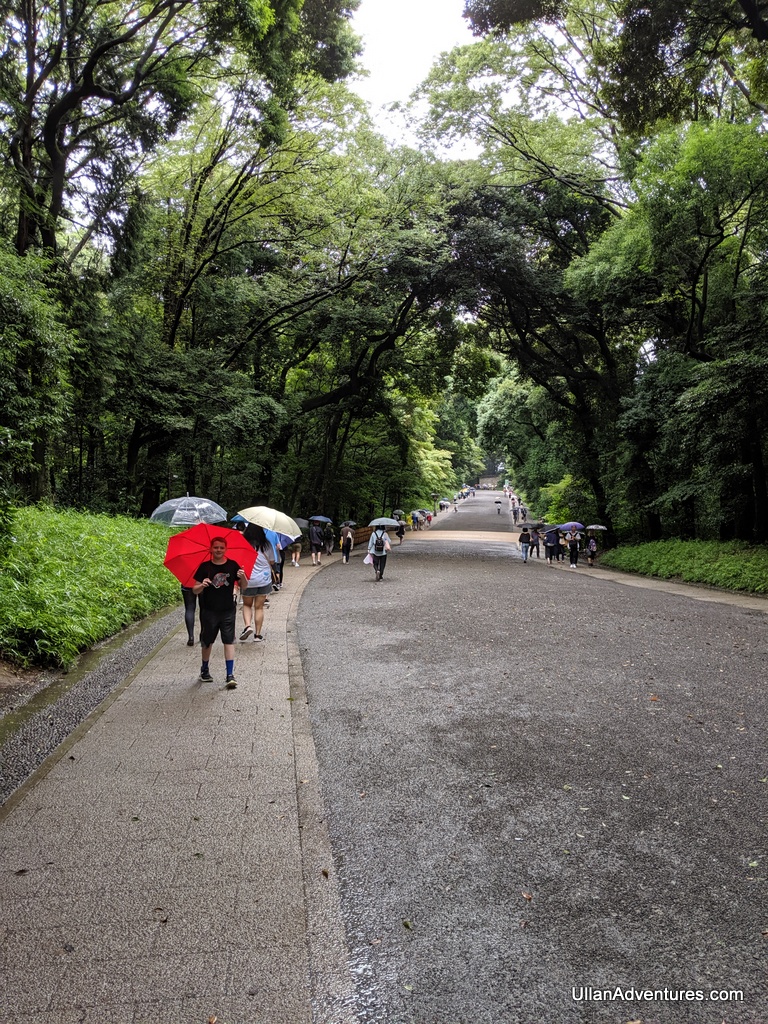 Part of the long walk 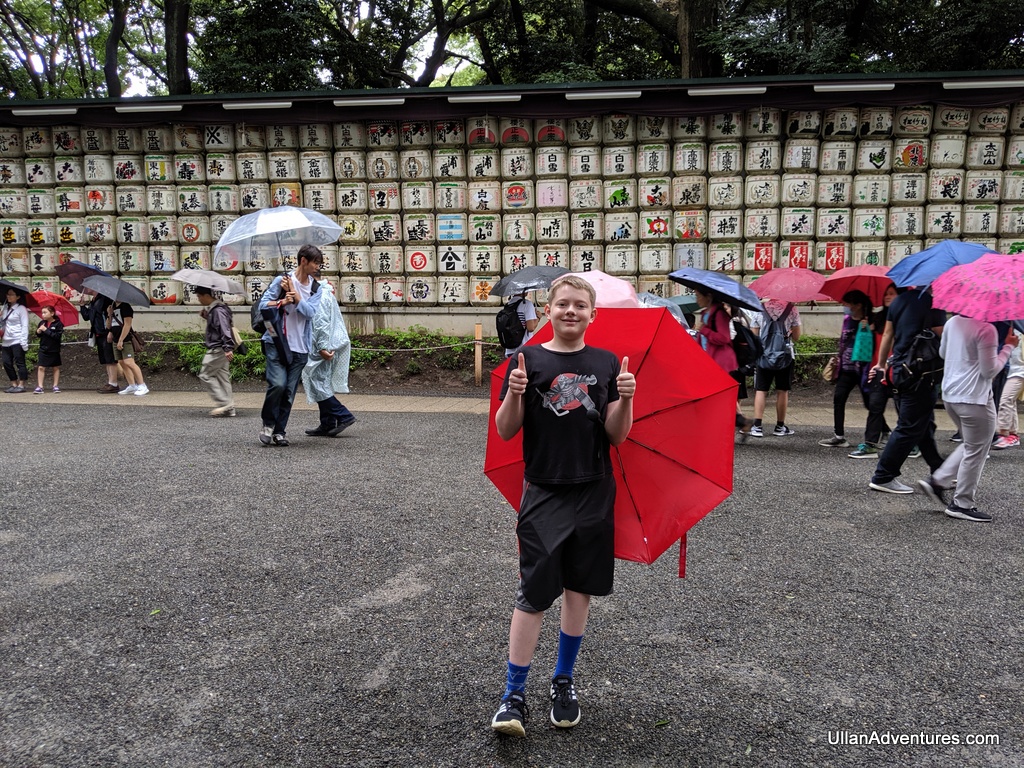 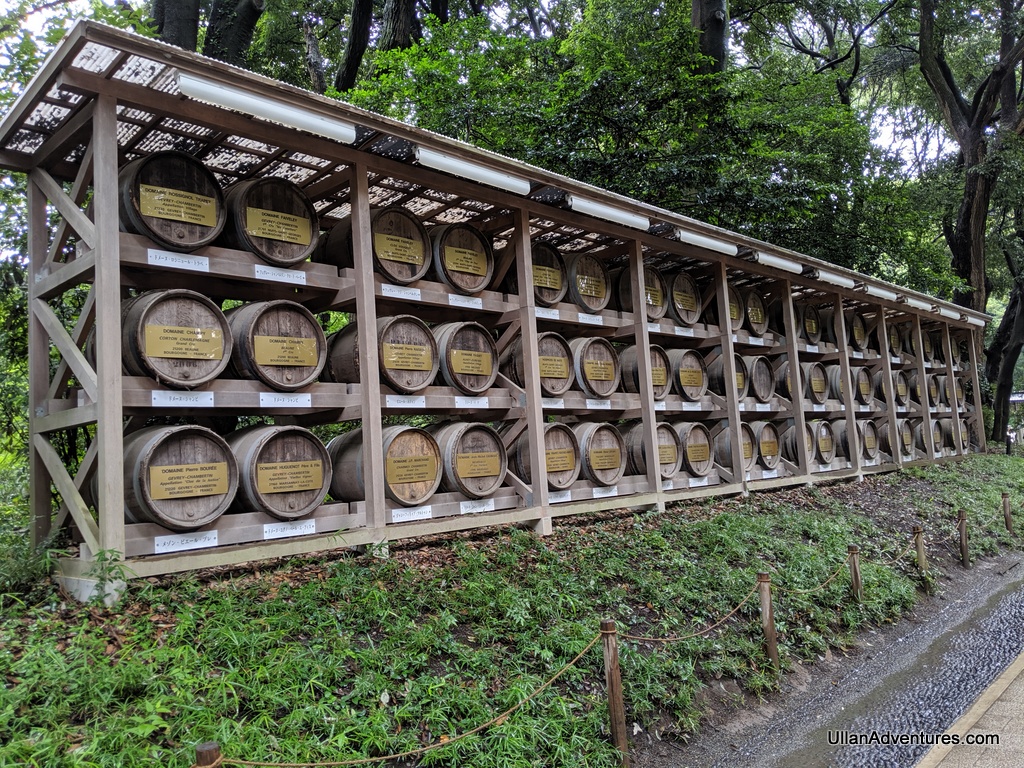 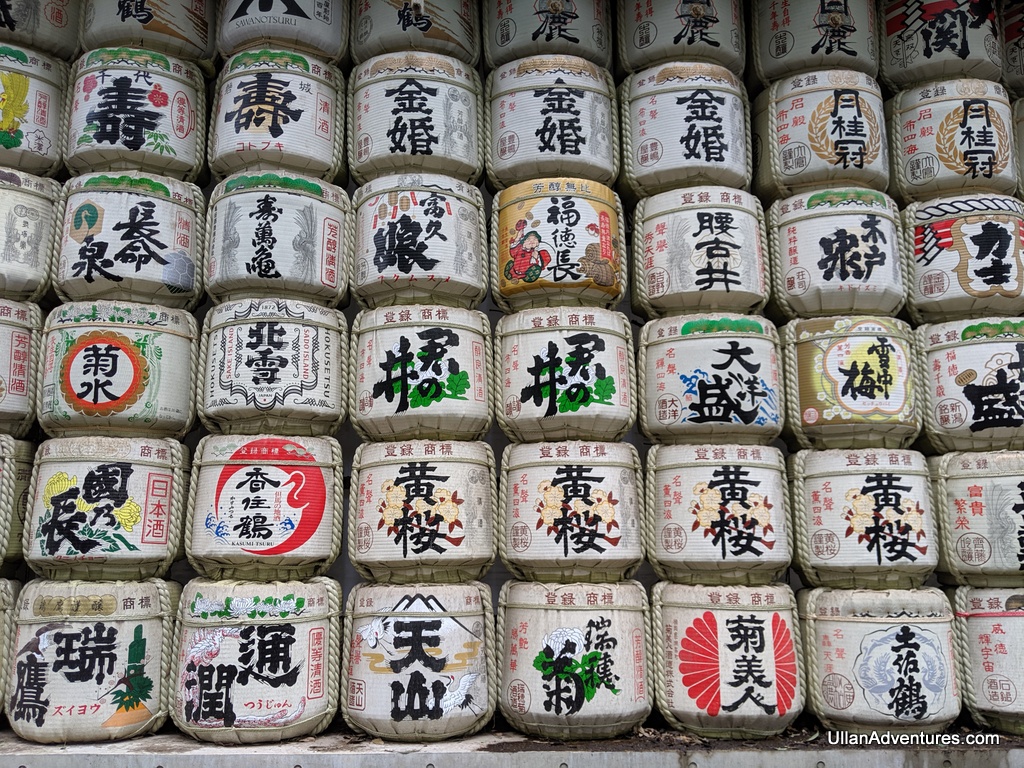 At the entrance of the shrine, there is an area to cleanse your hands and mouth with instructions in English so we knew what to do.  Seeing as it was raining and we were really jetlagged, we didn’t stay for very long before heading back to the rental.  We did buy a wooden prayer tablet where we each wrote a message before hanging it with all the others. 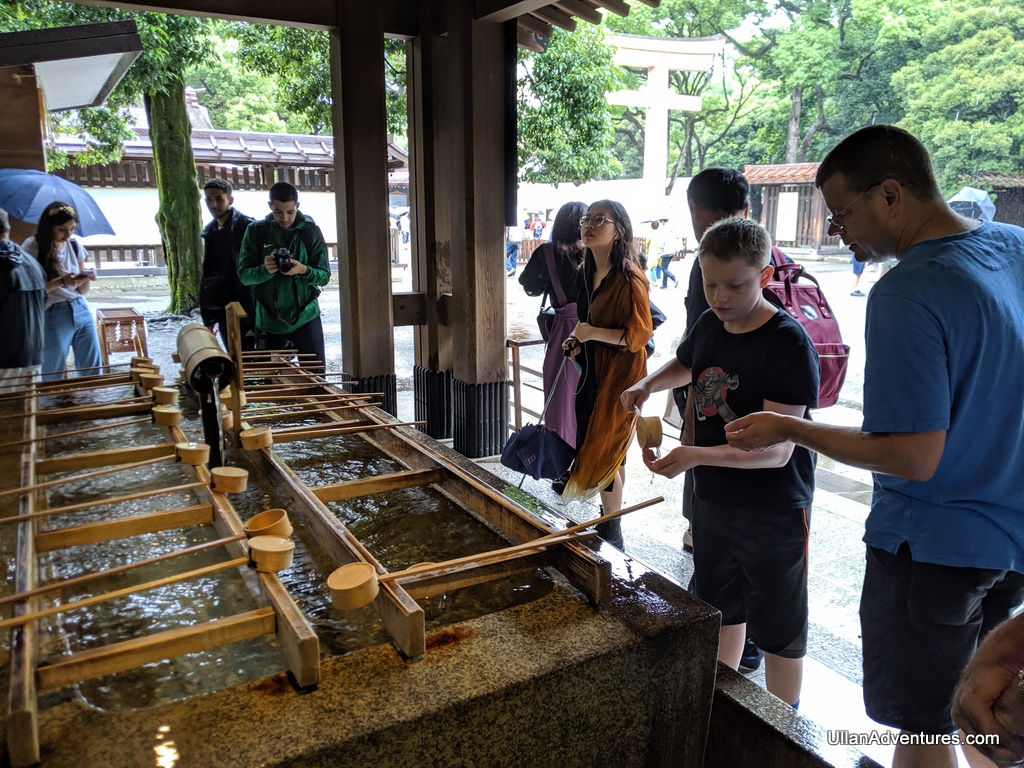 Cleansing our hands before we enter the shrine 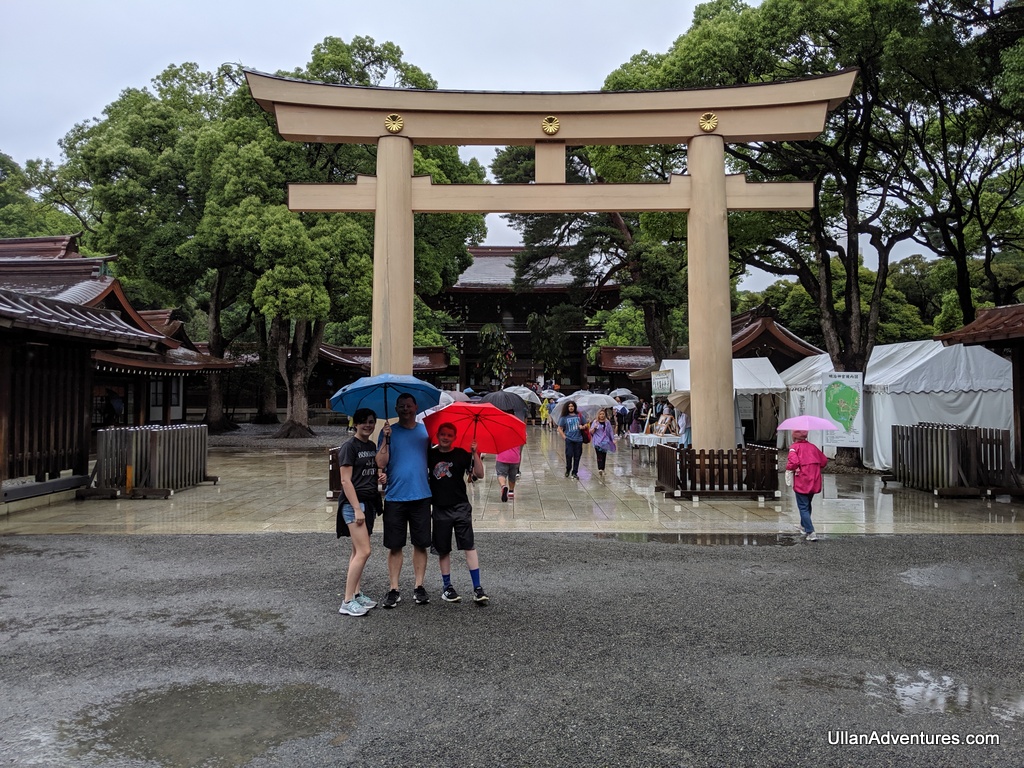 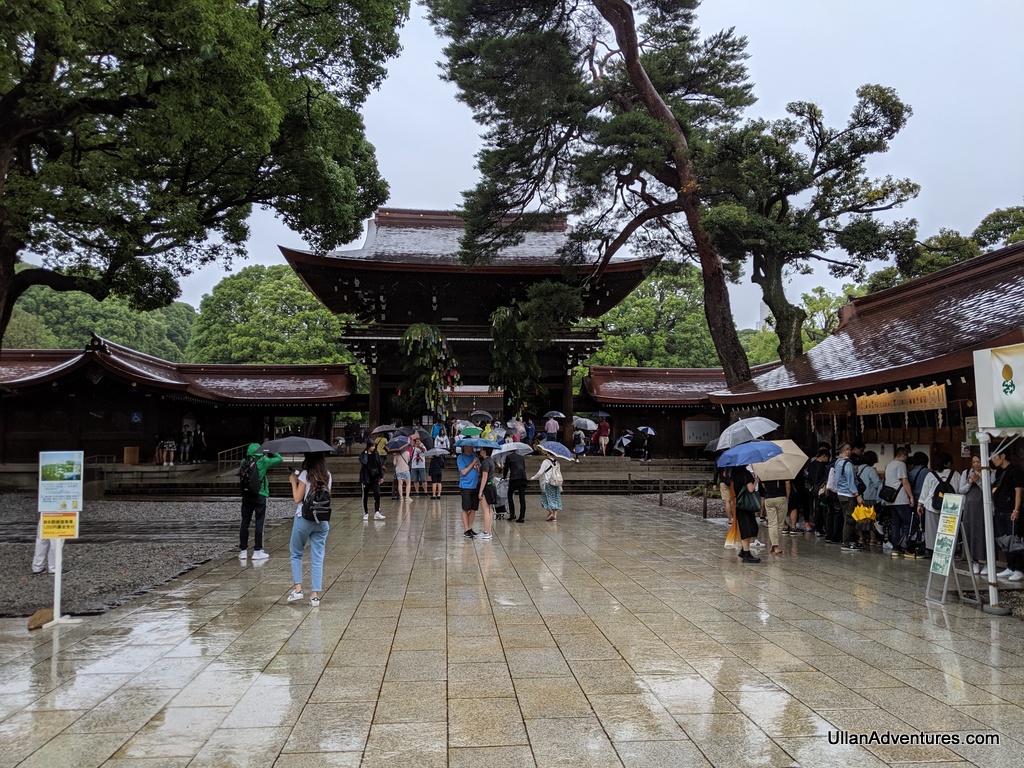 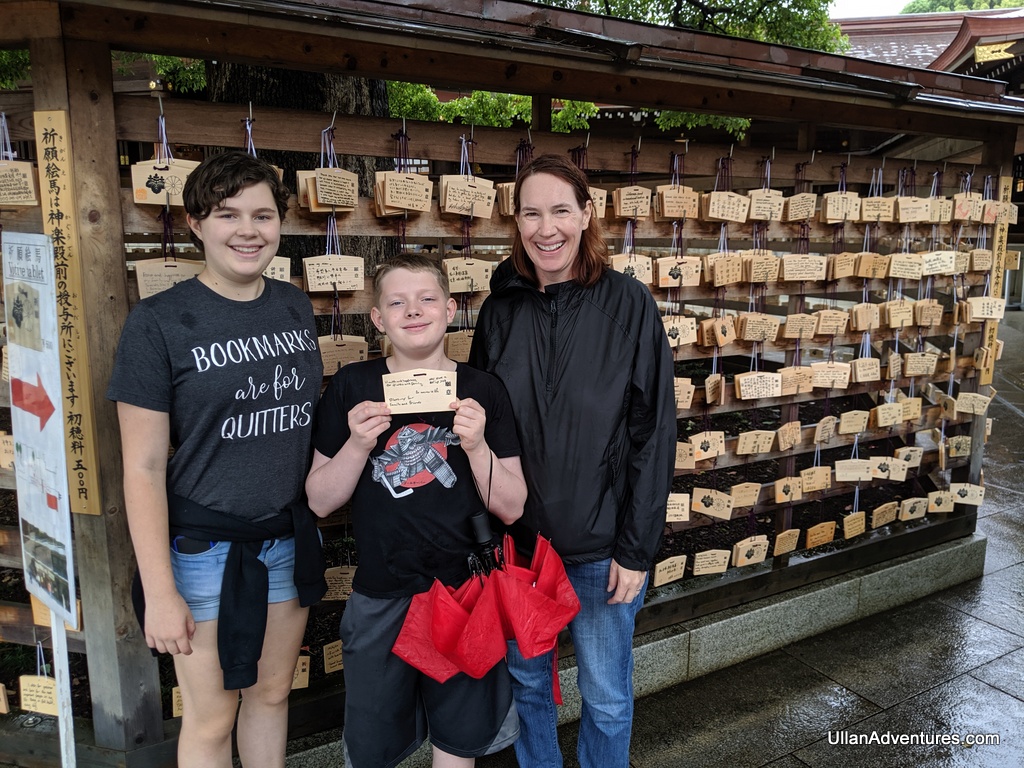 After resting at the rental, we headed out to Shibuya for lunch.  We found a place that has shabu shabu which was the first of many shabu shabu meals we ate over the next 2 weeks.

Then it was off to the first of many arcades for some fun.  As soon as Beckett walked in, he spotted “Duck” in a crane machine and it became our mission on the trip to win Duck.  He tried and tried, but wasn’t successful, however we kept our eyes out for him at other arcades.  Eventually he was successful winning “Mini Duck” at a crane machine on day 4! 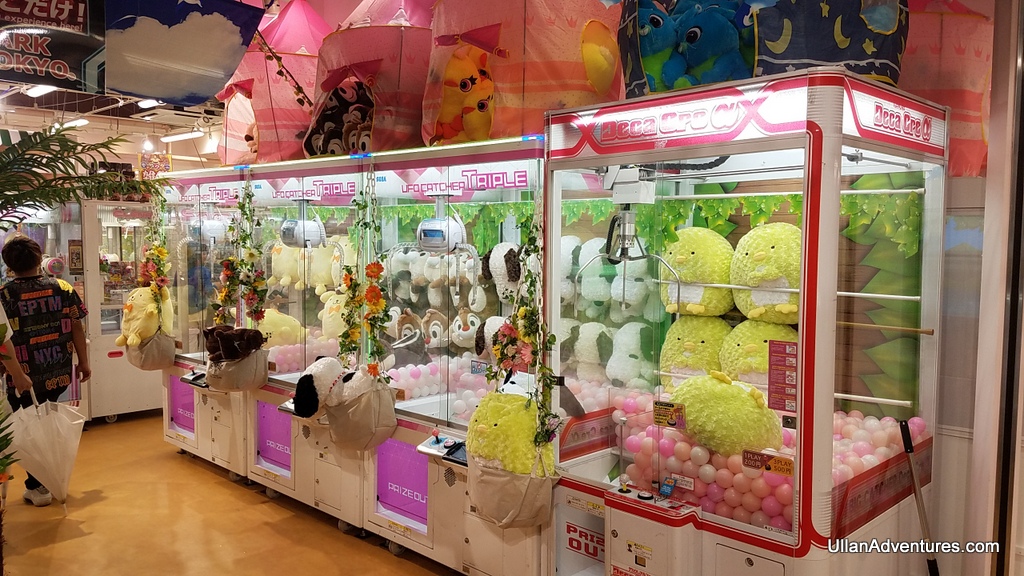 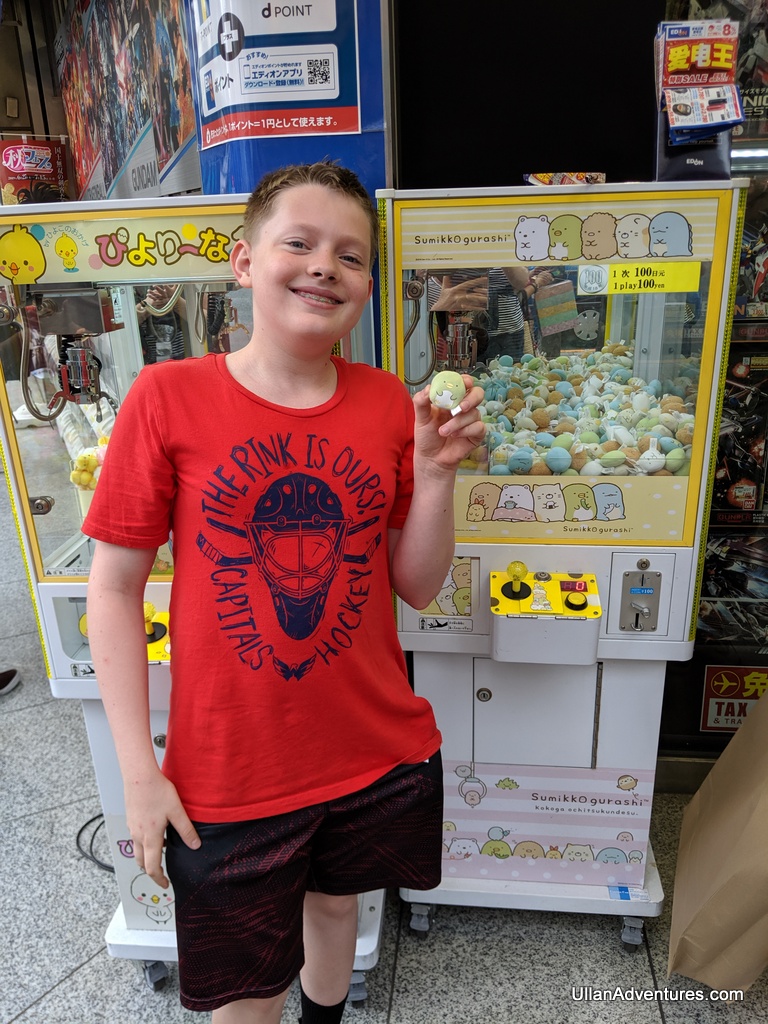 We ended up spending a lot of time in this arcade and had a blast.  We found a 4 person air hockey table, we all played Mario Kart, the kids discovered this drum game that they couldn’t get enough of, and there were plenty of other games and fun to be had.  We visited quite a few arcades throughout our time in Japan! 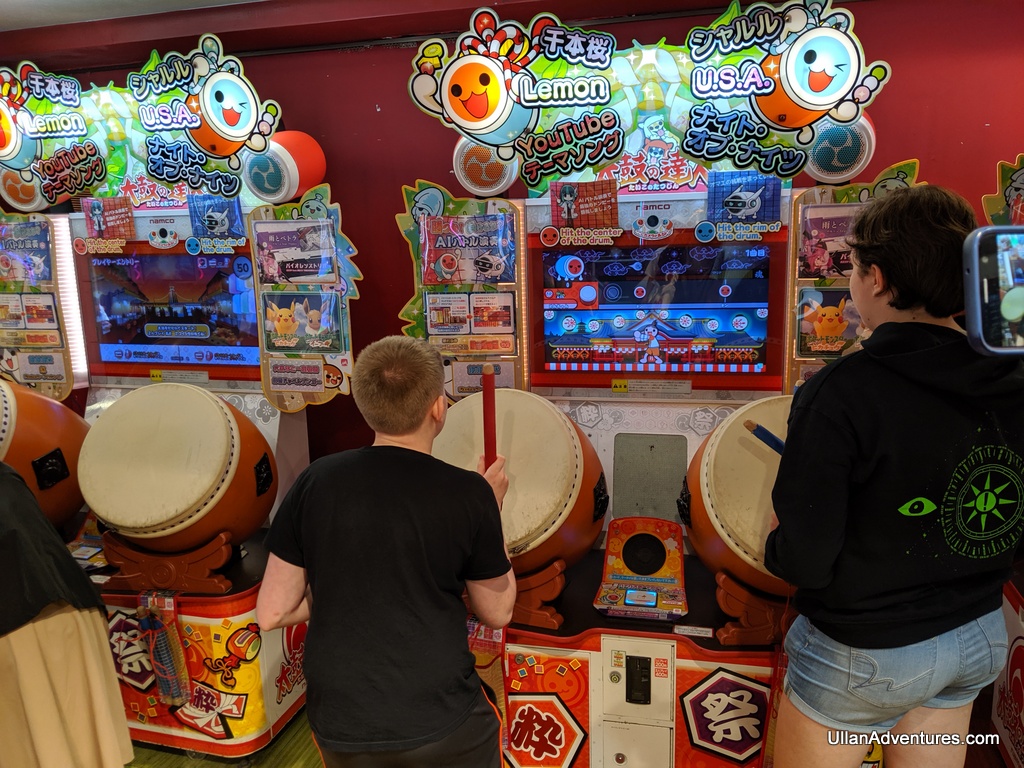 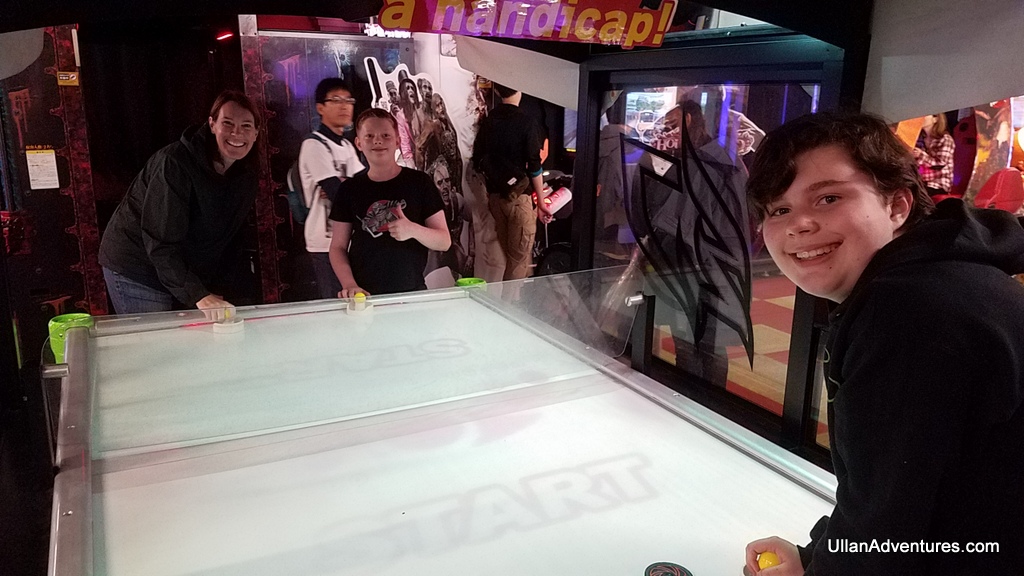 4 person Air Hockey!  This was so fun! 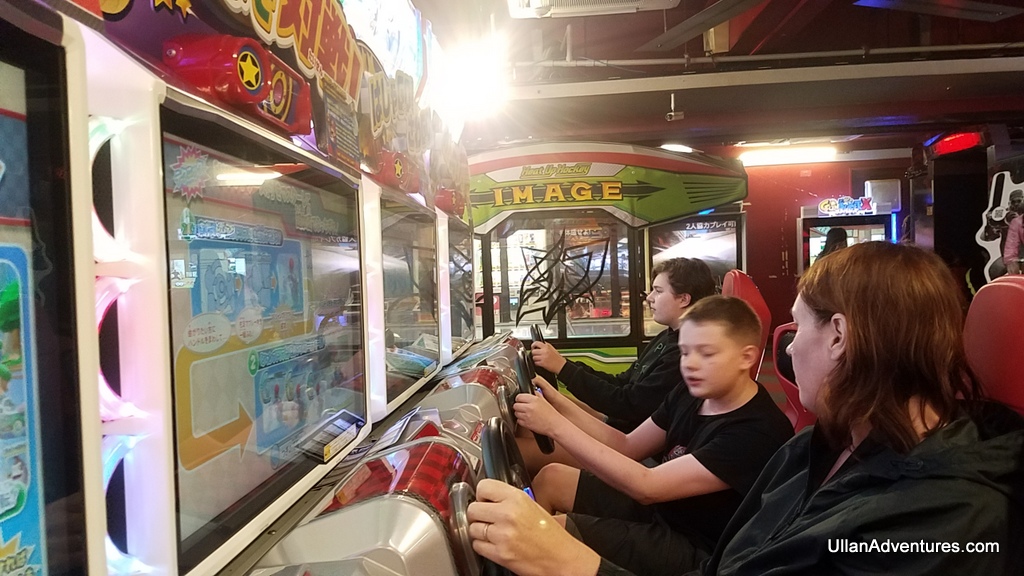 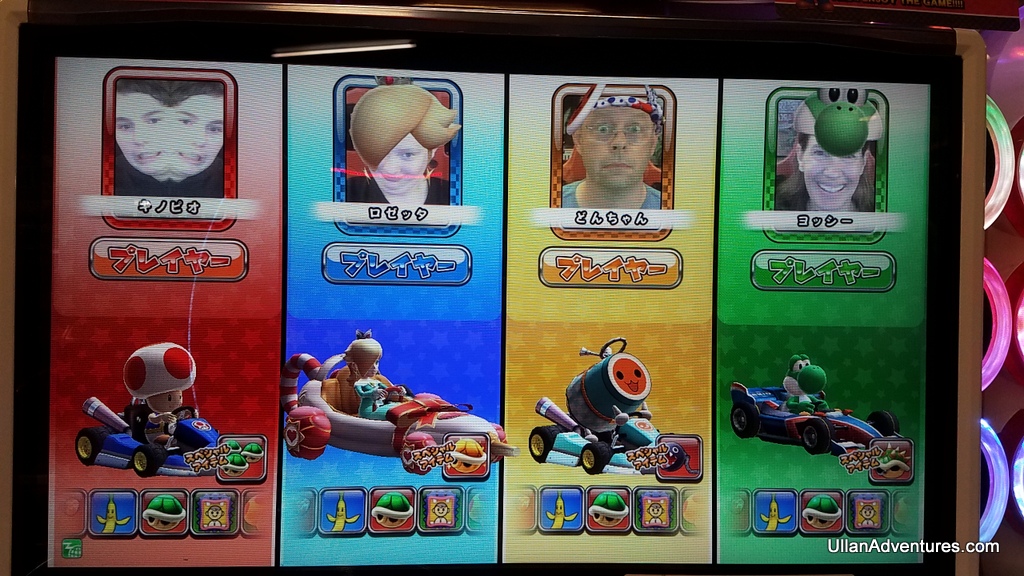 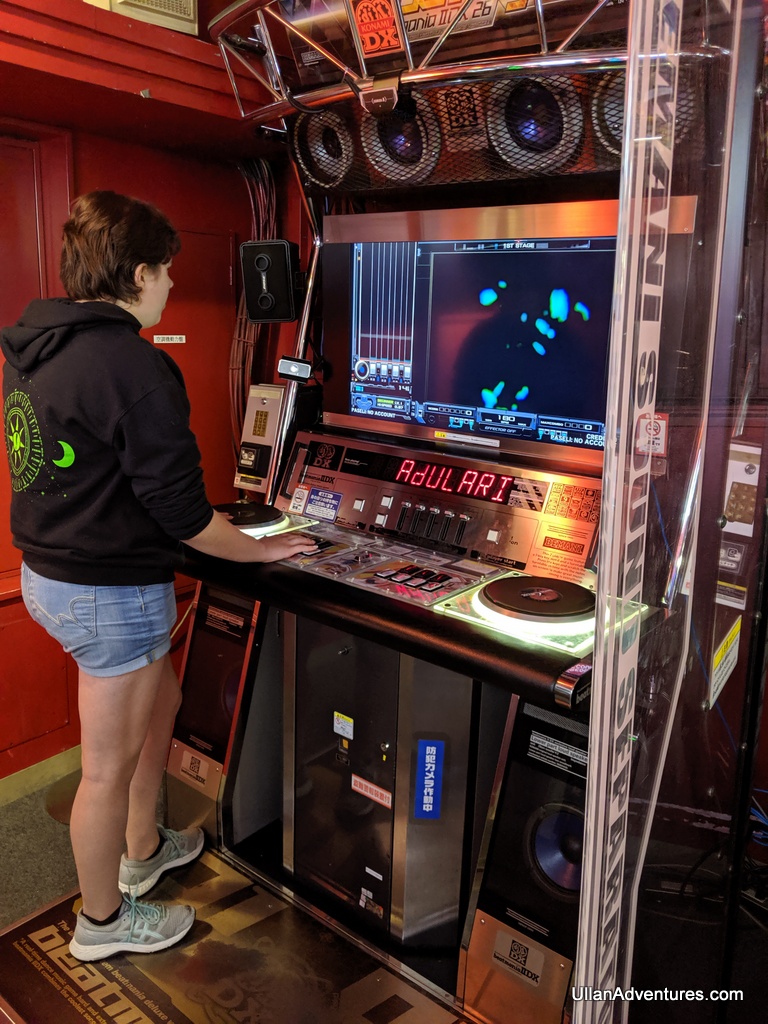 We then wandered around the Shibuya area and to the Shibuya Scramble.  This is the world’s busiest intersection and is quite the site to behold.  It was raining the first time we went, but we went back another day to see it at rush hour. 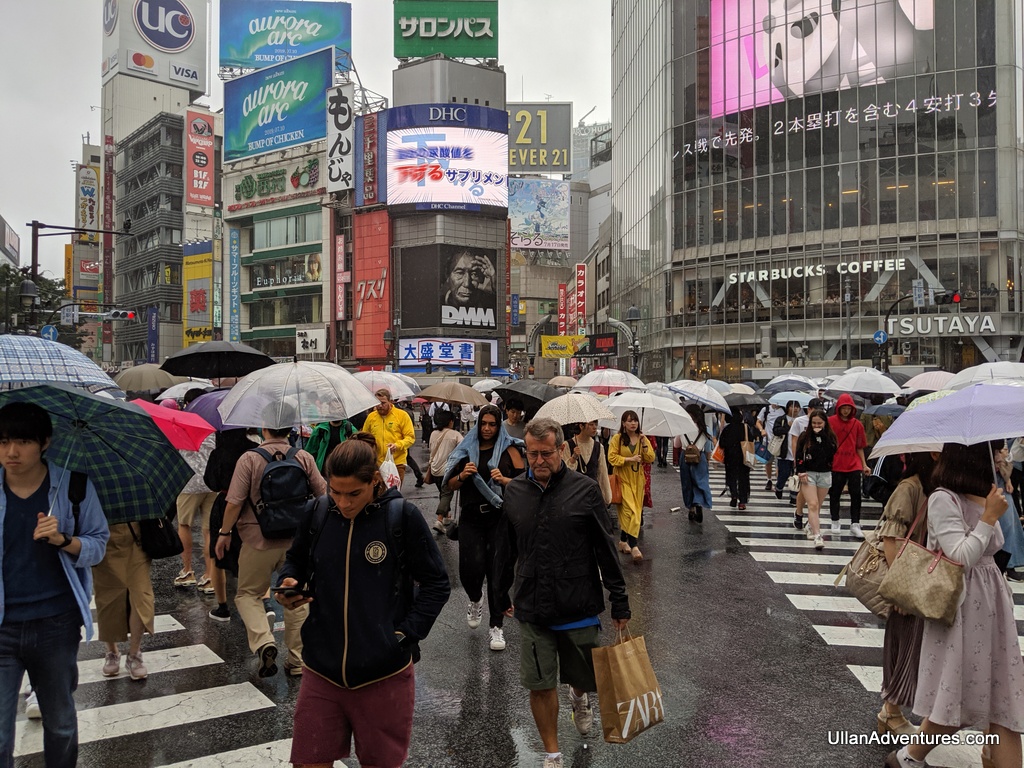 Shibuya Scramble in the rain 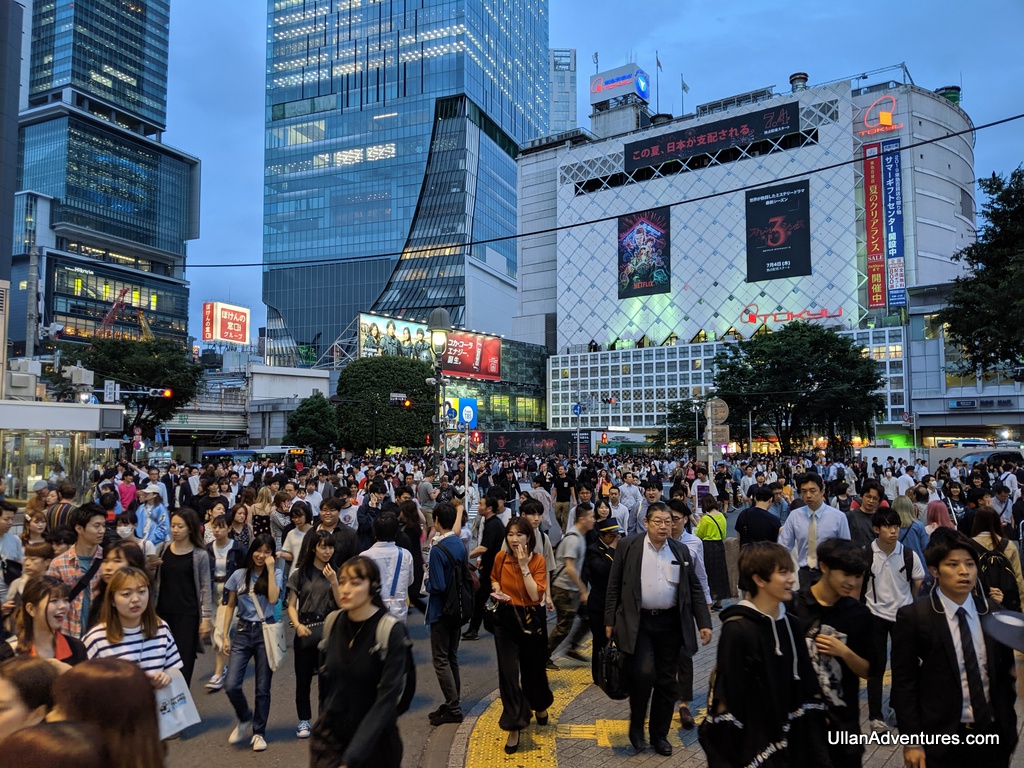 After wandering around Shibuya some more, we headed back to our rental for some much needed rest. 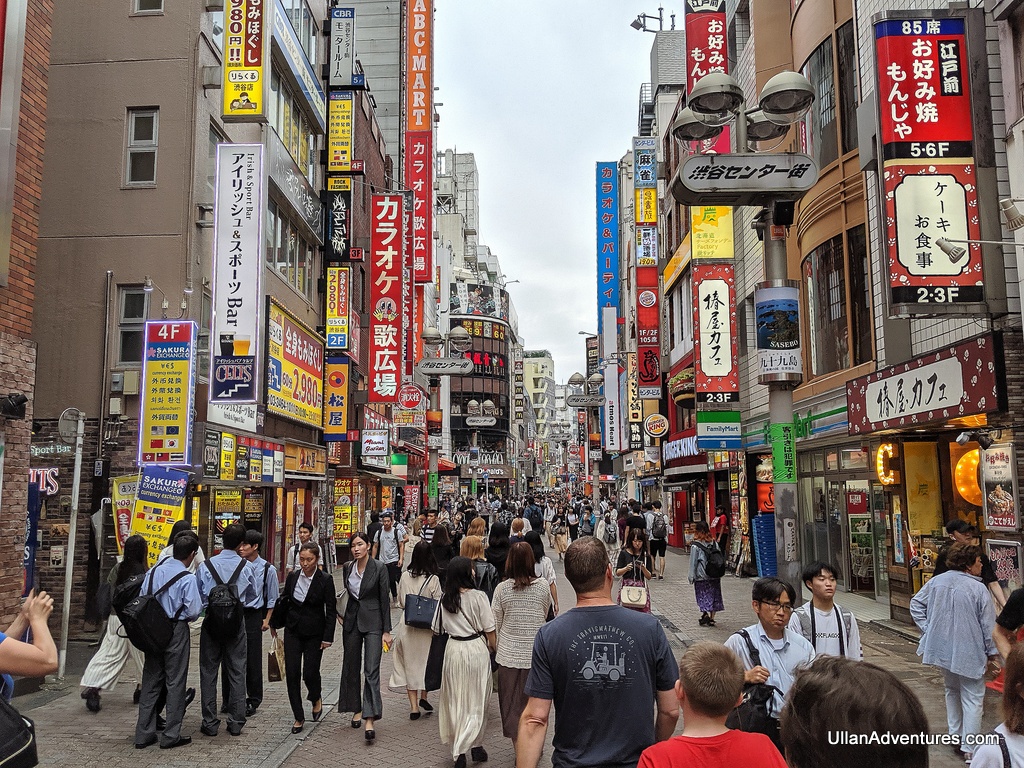 After some dinner, it was finally time for sleep!  Phew, what a busy first day!