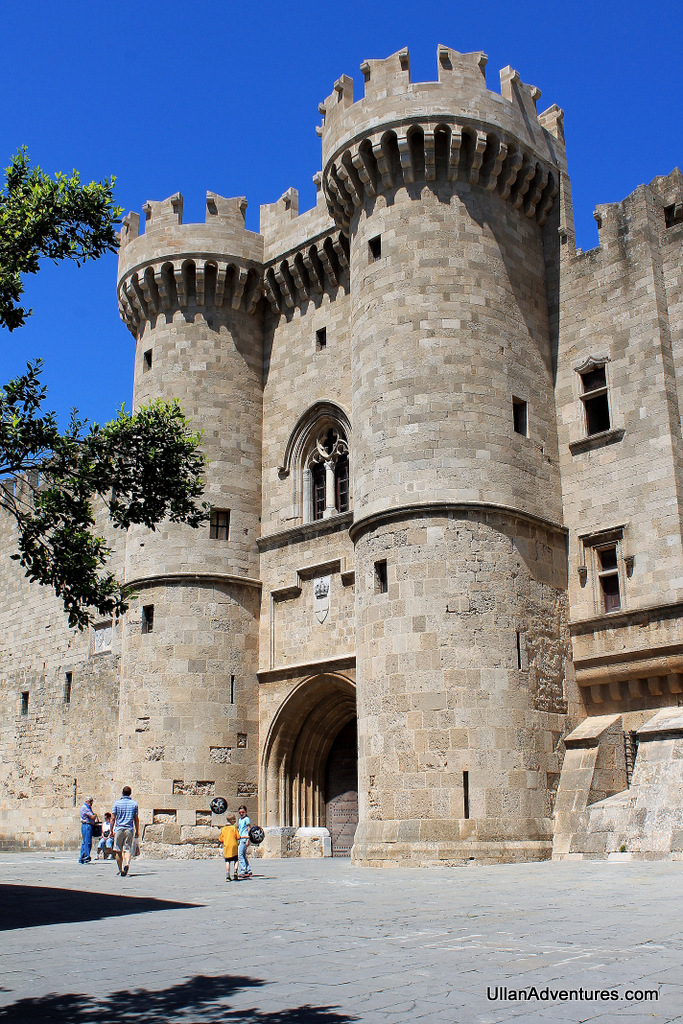 You ever walk around and expect Knights on horseback to storm out of a castle?

Me neither, except in Rhodes!

Rhodes Town (on the island of Rhodes) is dominated by walls and castles dating from the 1300s to 1500s, when the presence of Christian Knights was at its peak.

The old town is a UNESCO World Heritage site and it really feels like you’re walking back in time.  Or like you’re in Monty Python’s “Quest for the Holy Grail”, which is even better!

It seems like each little side street is more adorable than the last, and it’s hard to believe it’s really modern underneath the surface.

The funny part about enjoying this so much is that it wasn’t part of any master plan to visit.  We had wanted to go to Athens and Santorini, and a stop in Rhodes was needed just so we could catch a ferry to Turkey.

Originally we planned to spend 4 days in Rhodes, but we extended 2 days in Santorini, which cut into our time in Rhodes.  We would’ve liked to stay longer in each place, but we ran out of visa days and had to be out on the European Schengen visa zone.

We first fell in love with Rhodes when we arrived at our place inside the old city walls and strolled along the little side streets into the big squares. 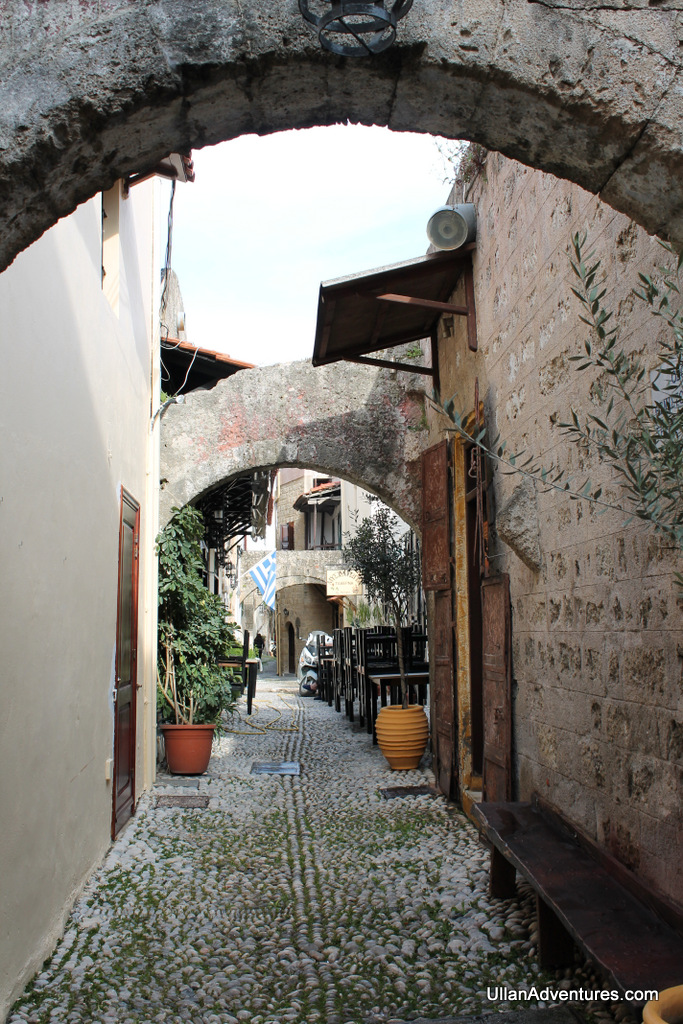 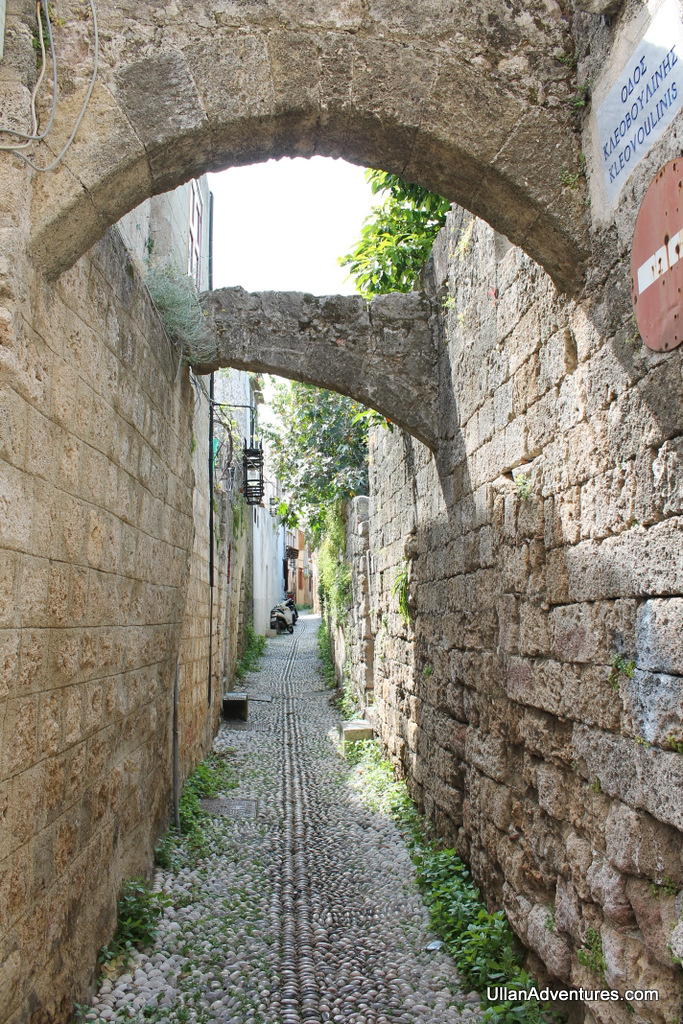 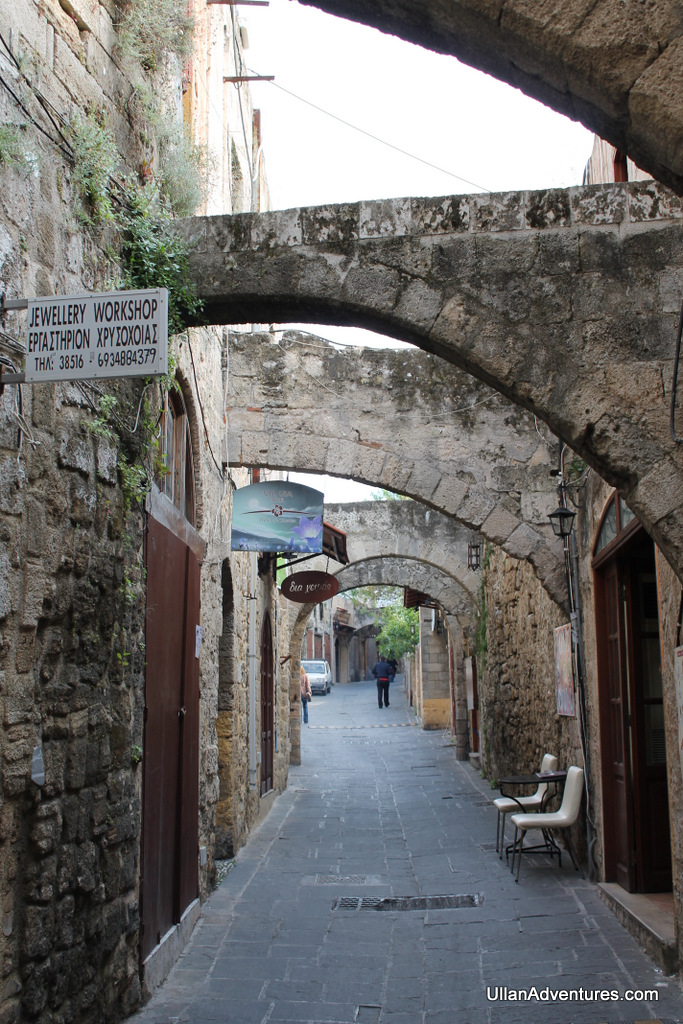 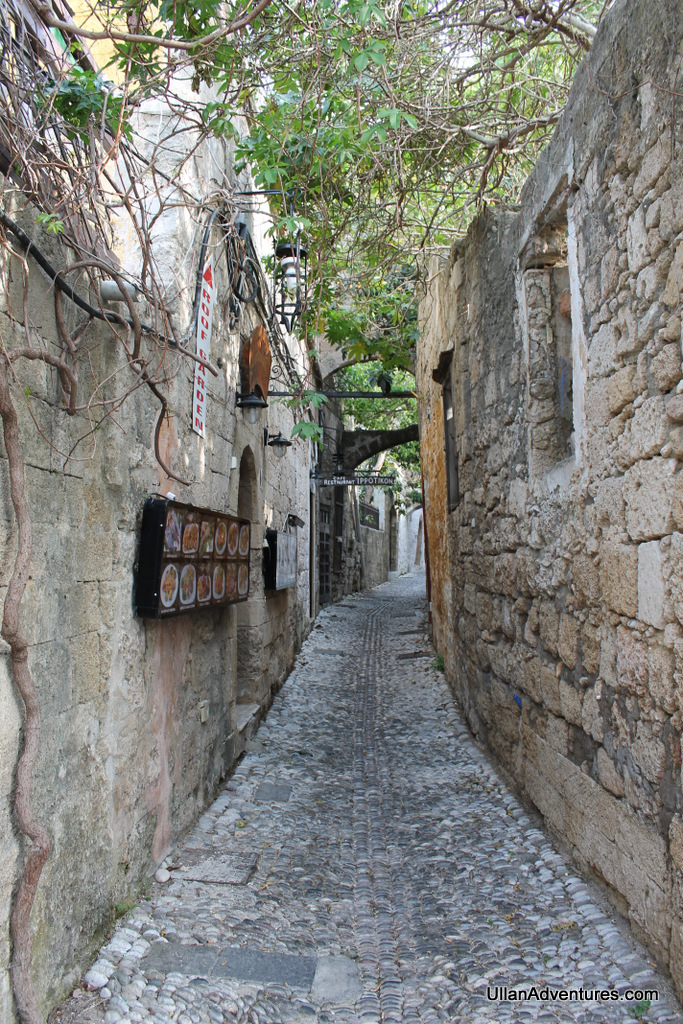 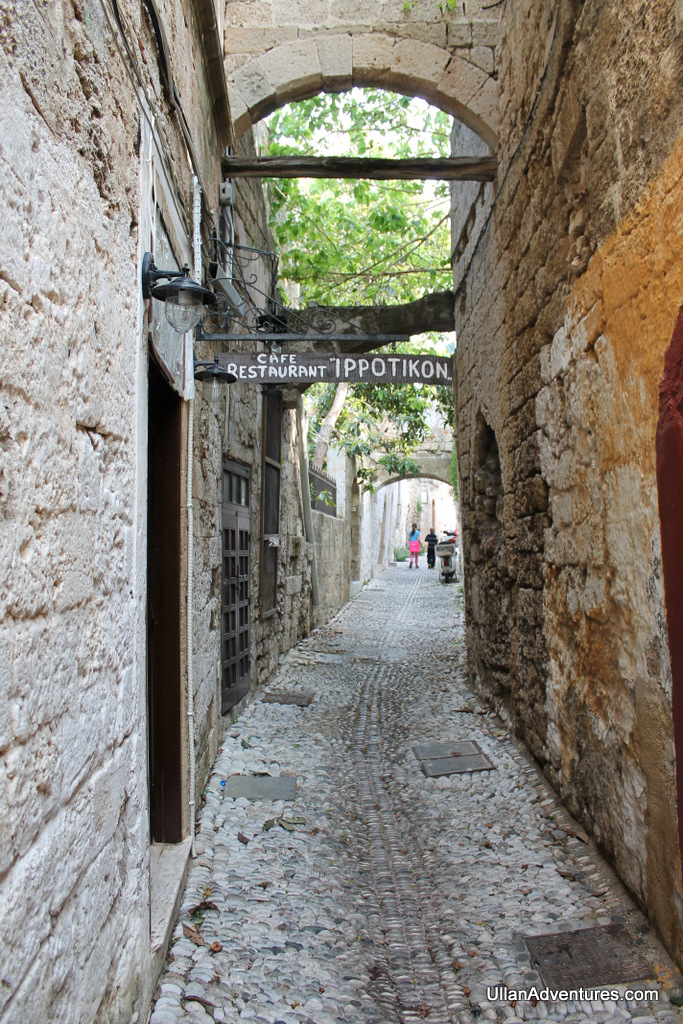 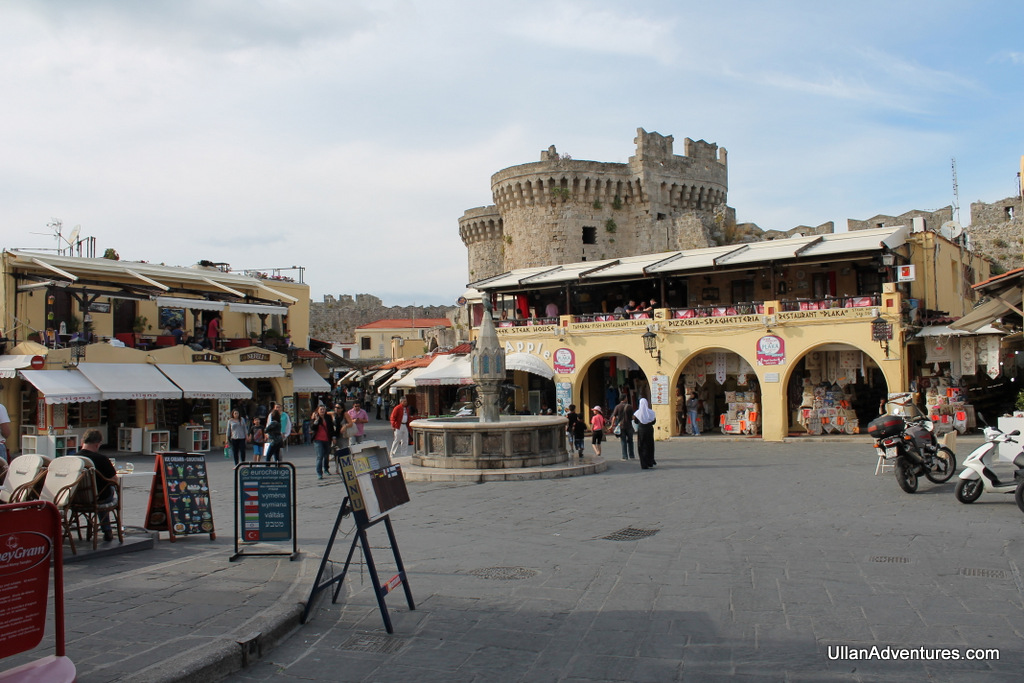 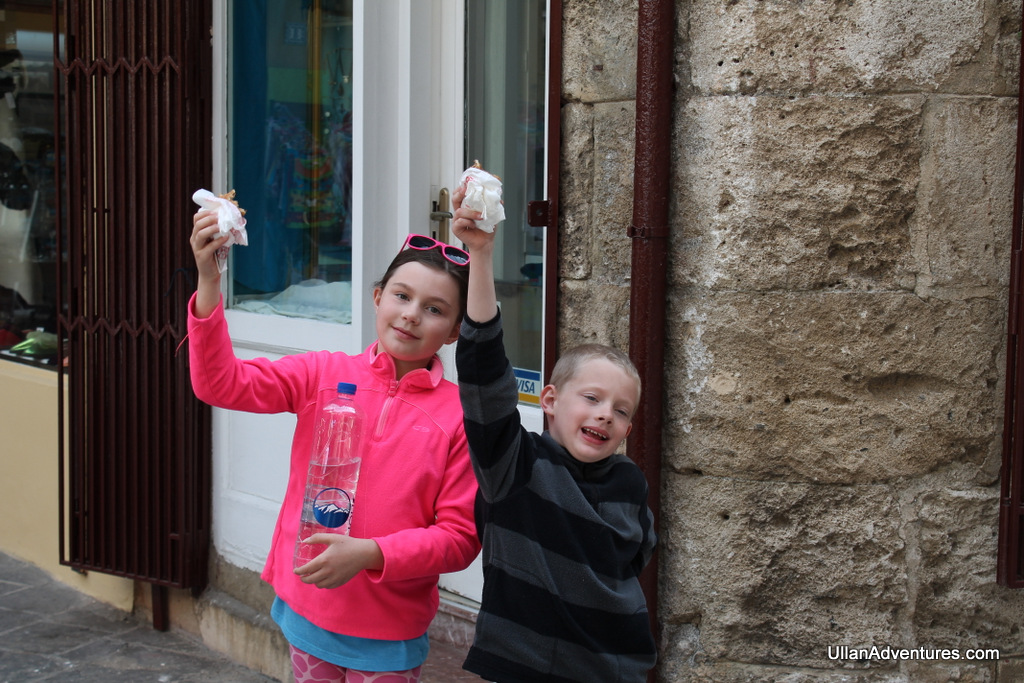 Enjoying crepes on the go.

Our second day, we explored the medieval castle known as the Palace of the Grand Master of the Knights of Rhodes.  If you picture “castle” in your mind, this is it! 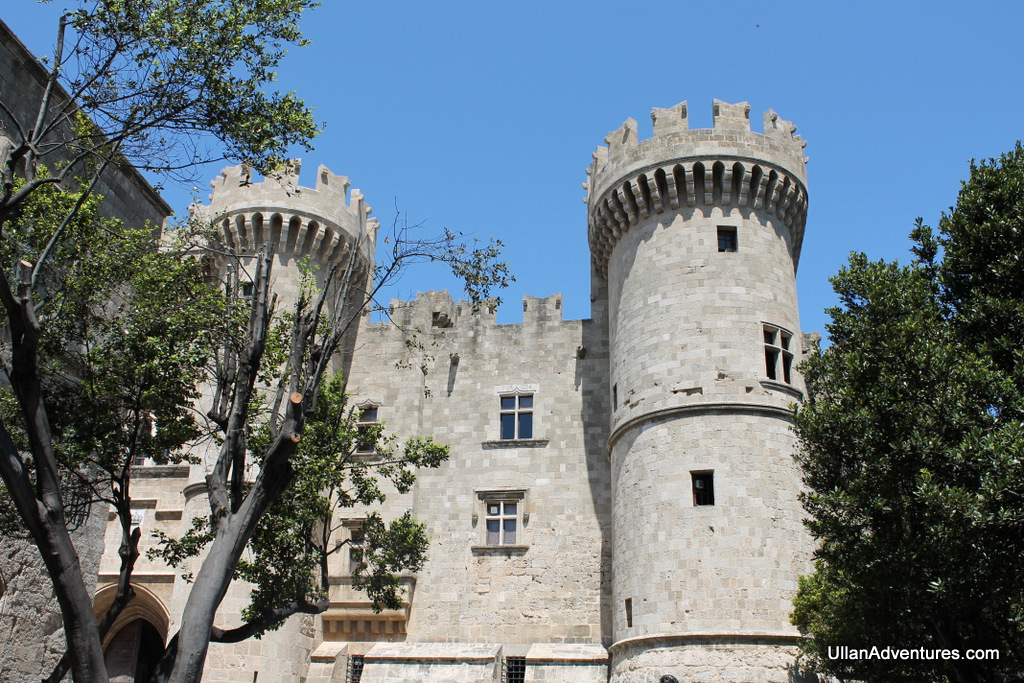 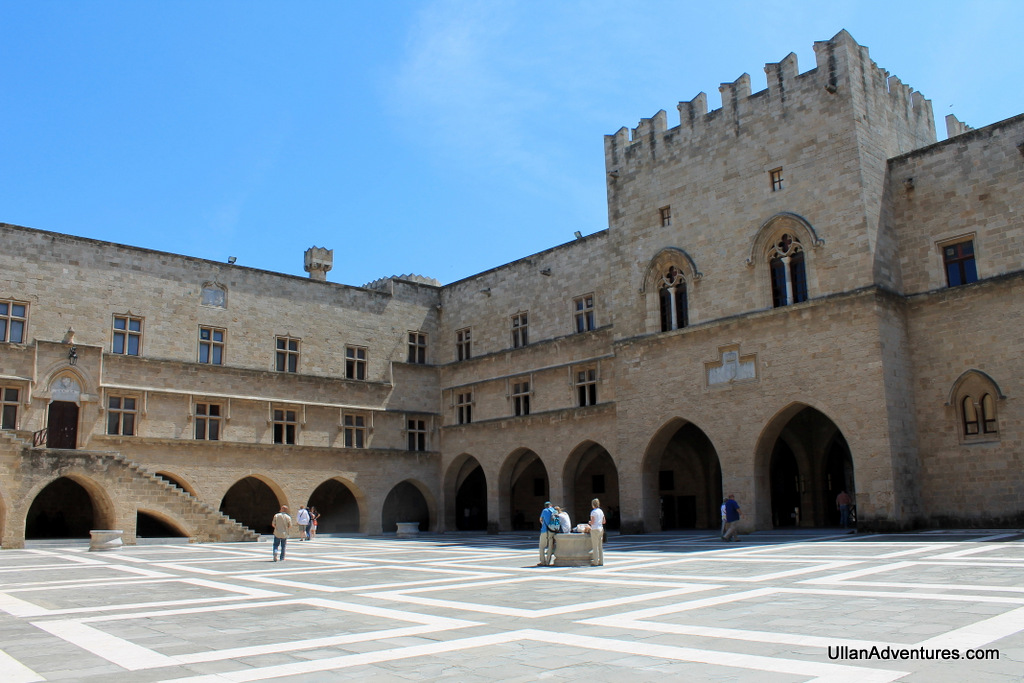 Courtyard inside the castle. 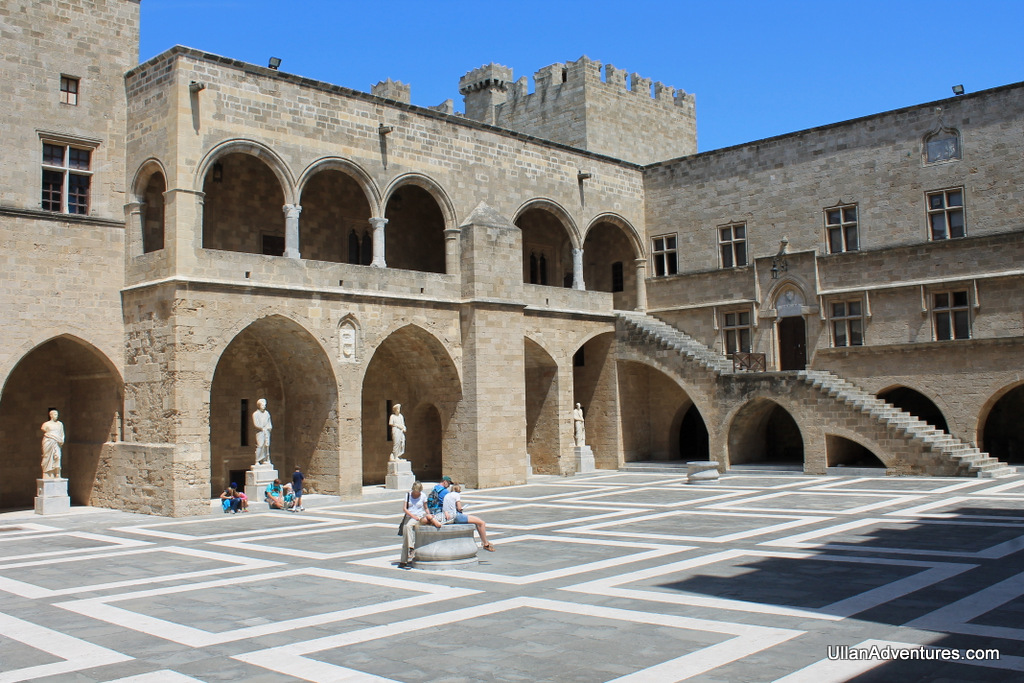 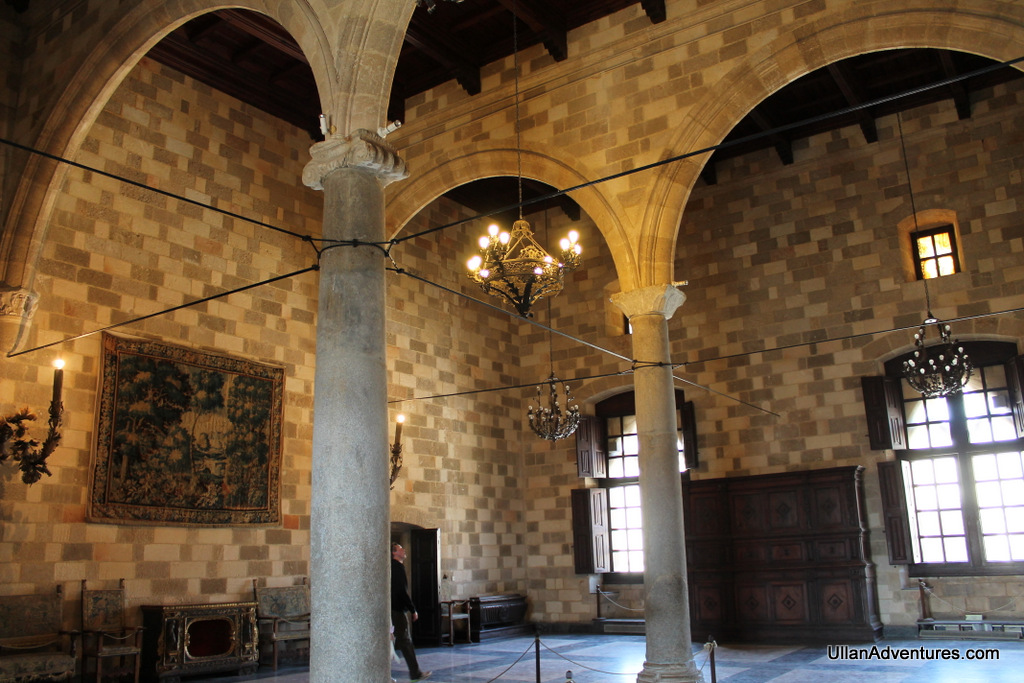 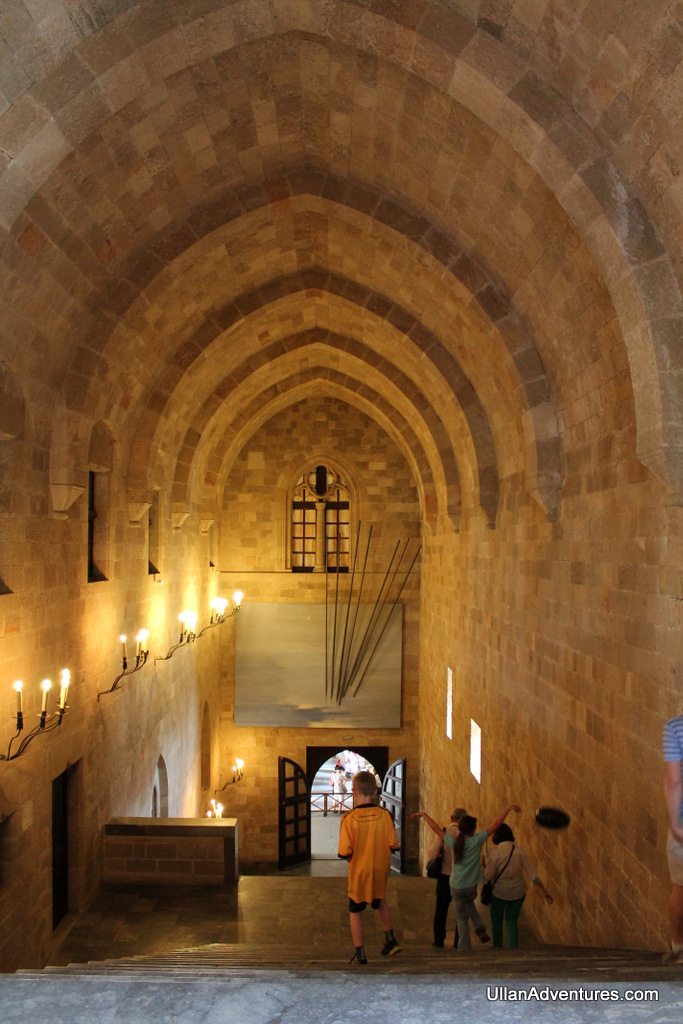 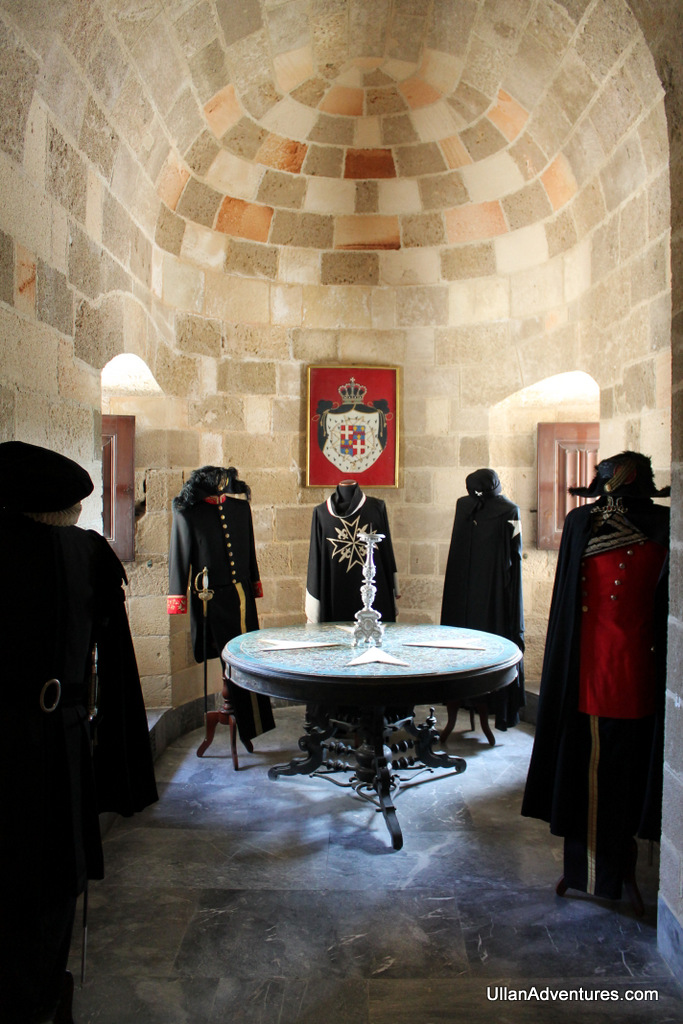 Uniforms representing what was worn at the time. 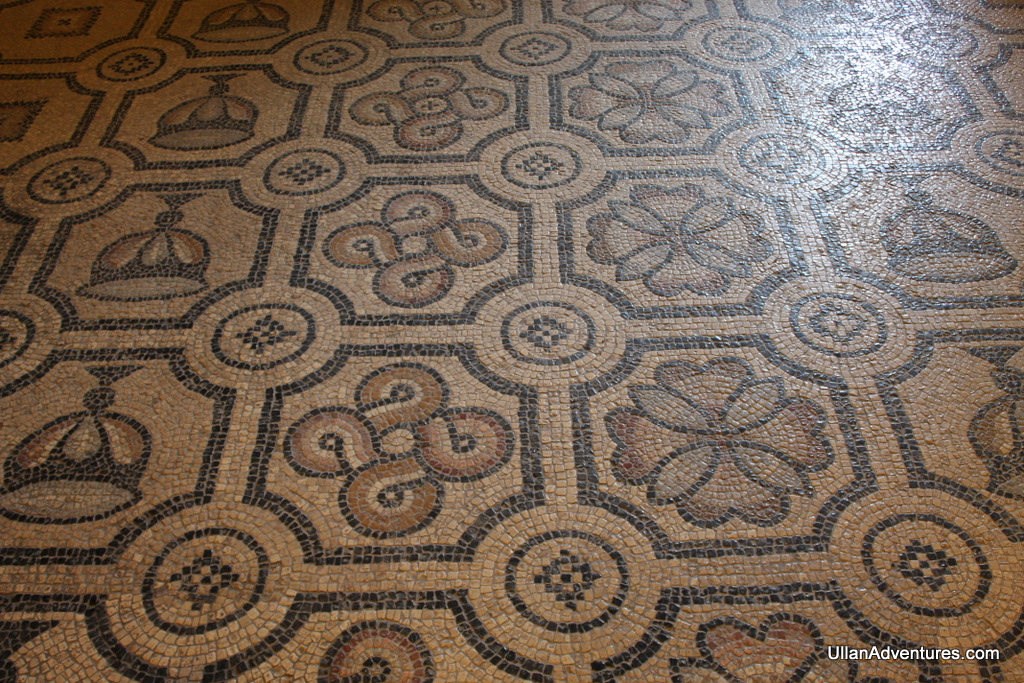 There are several mosaics in the castle that have been relocated from other sites.

Outside of the castle is the Street of the Knights: 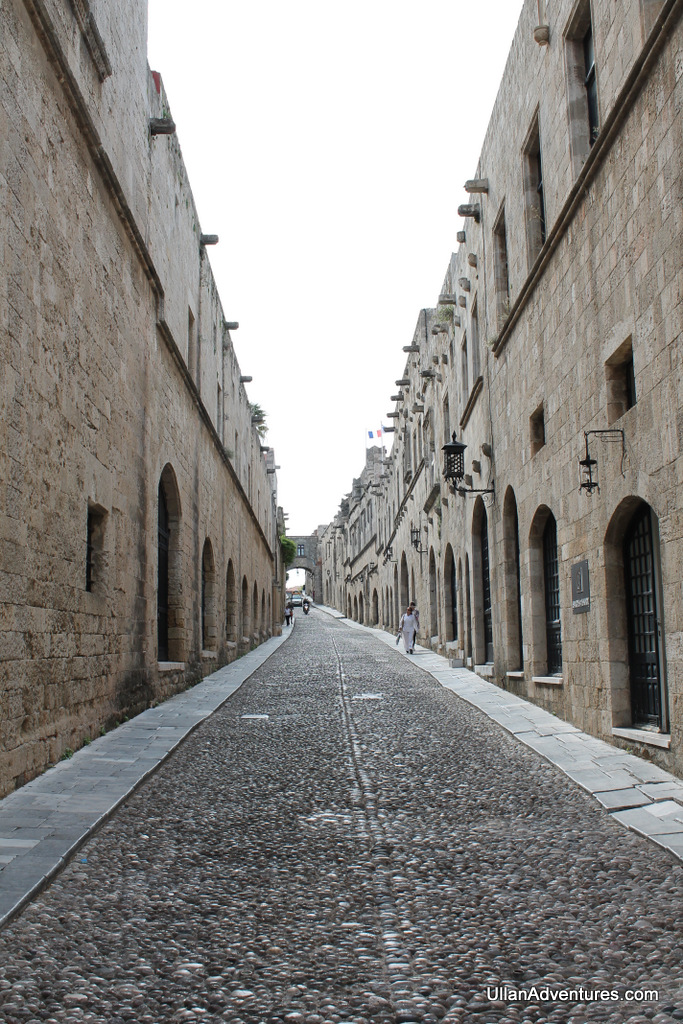 If you notice in the above picture, the streets are cobblestone but not in the usual way.  They put the stones sharp end up instead of flat so they weren’t the most comfortable things to walk on especially in flip flops. 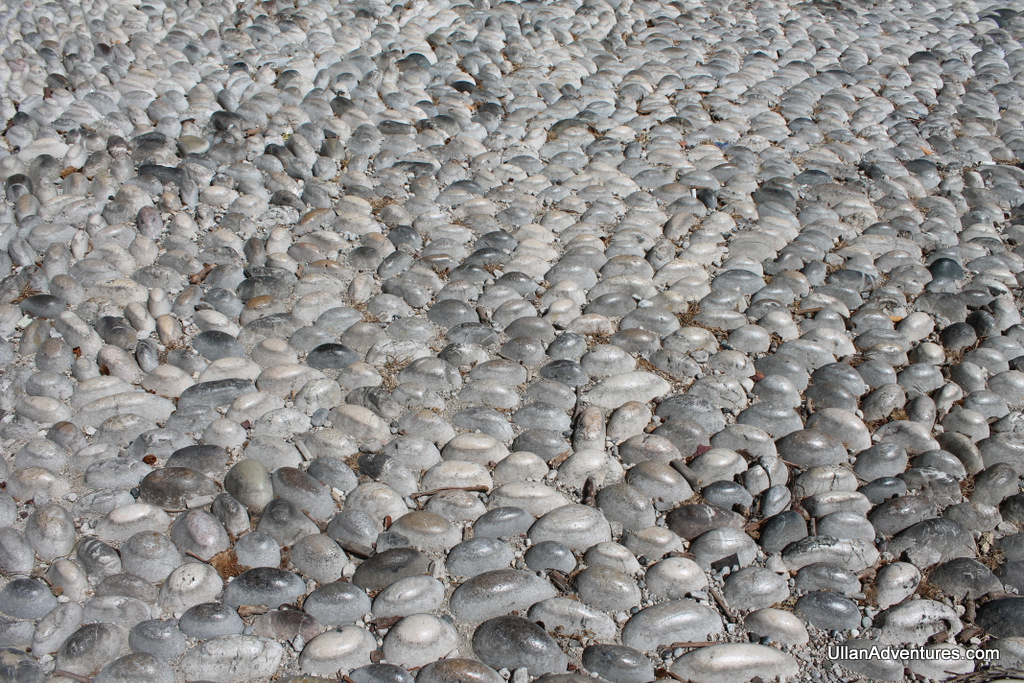 Here are a few pictures from walking around town: 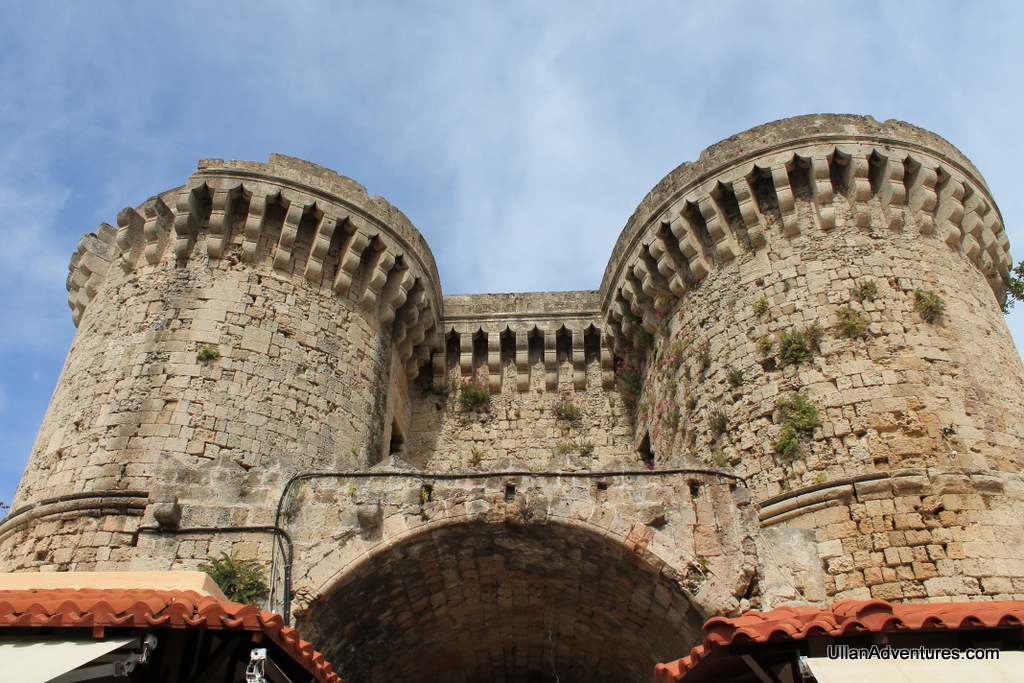 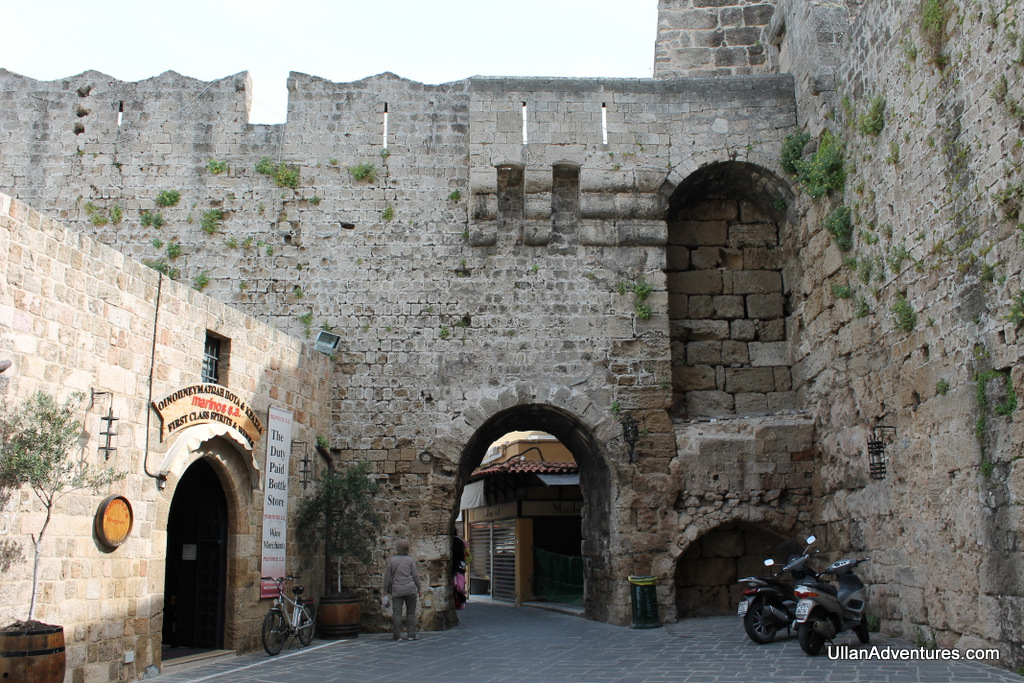 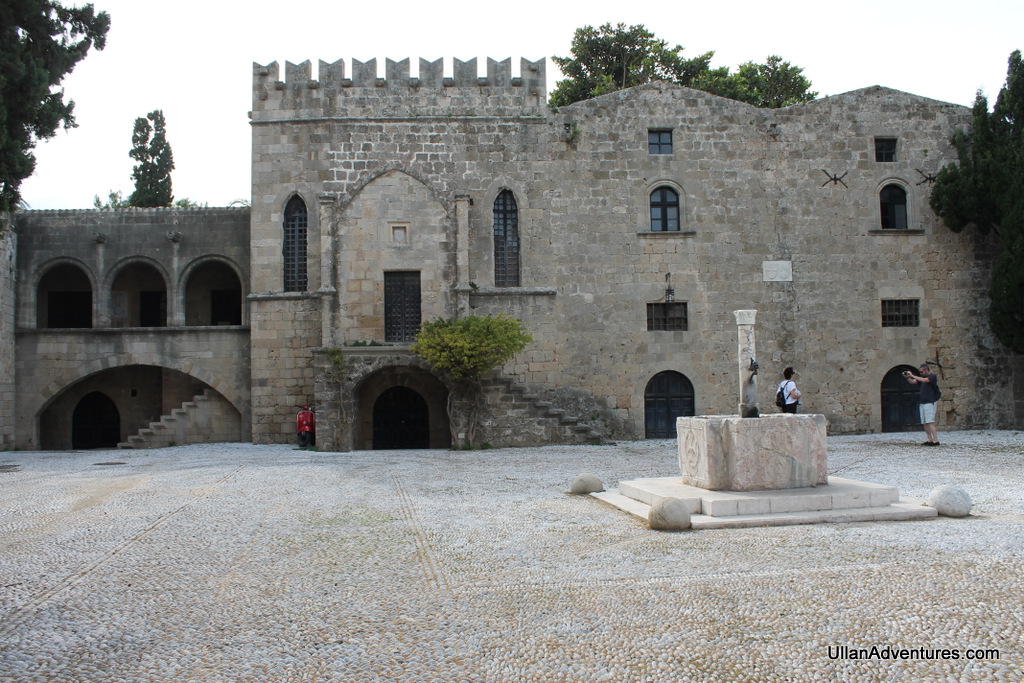 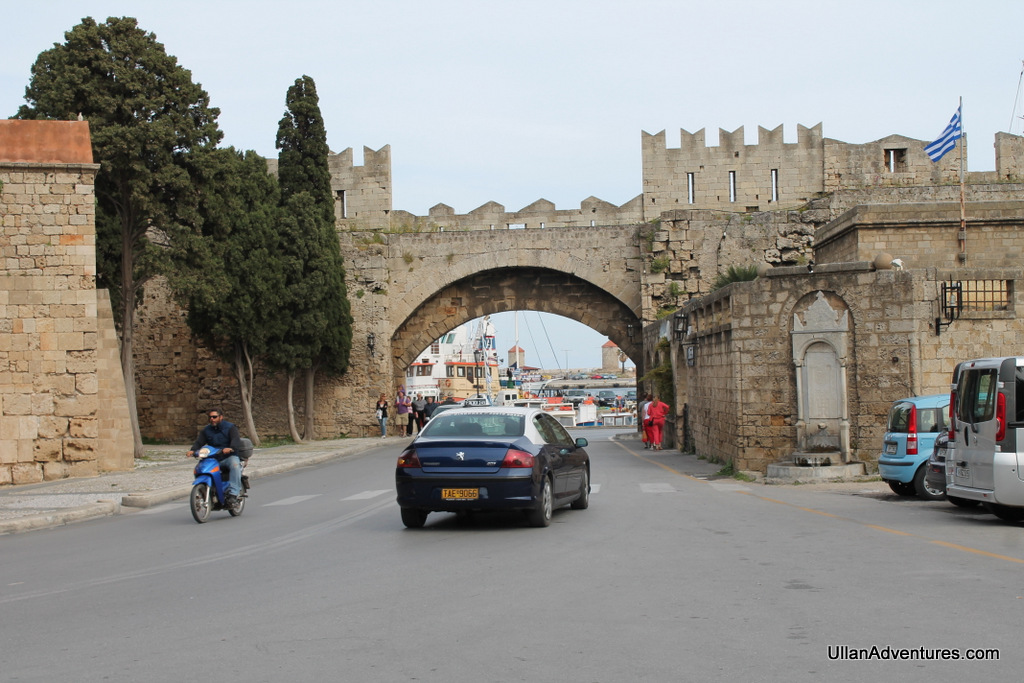 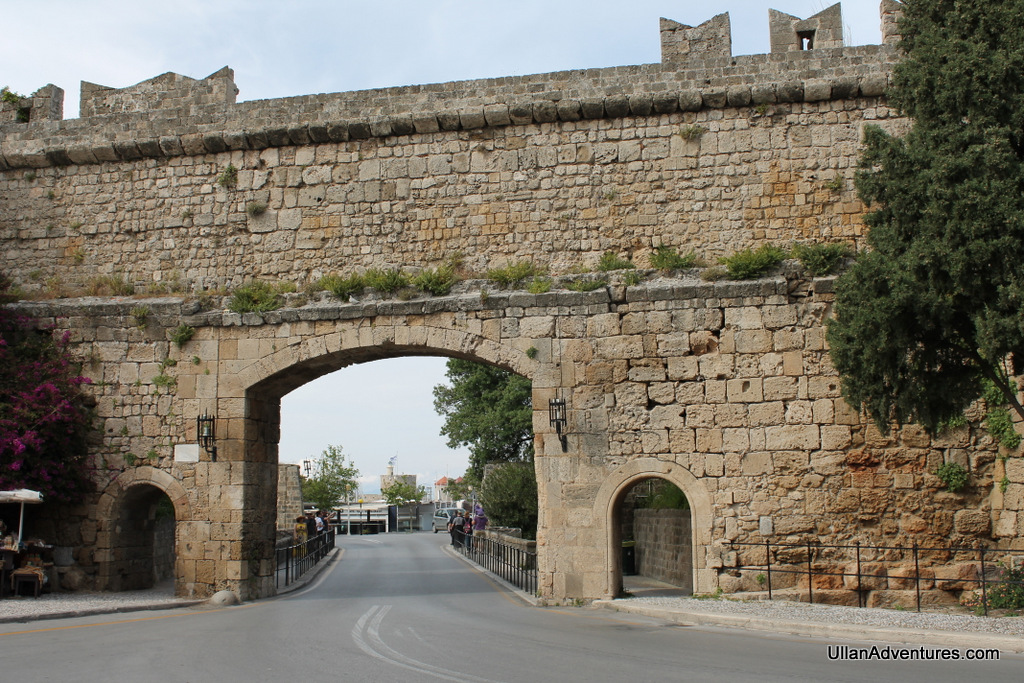 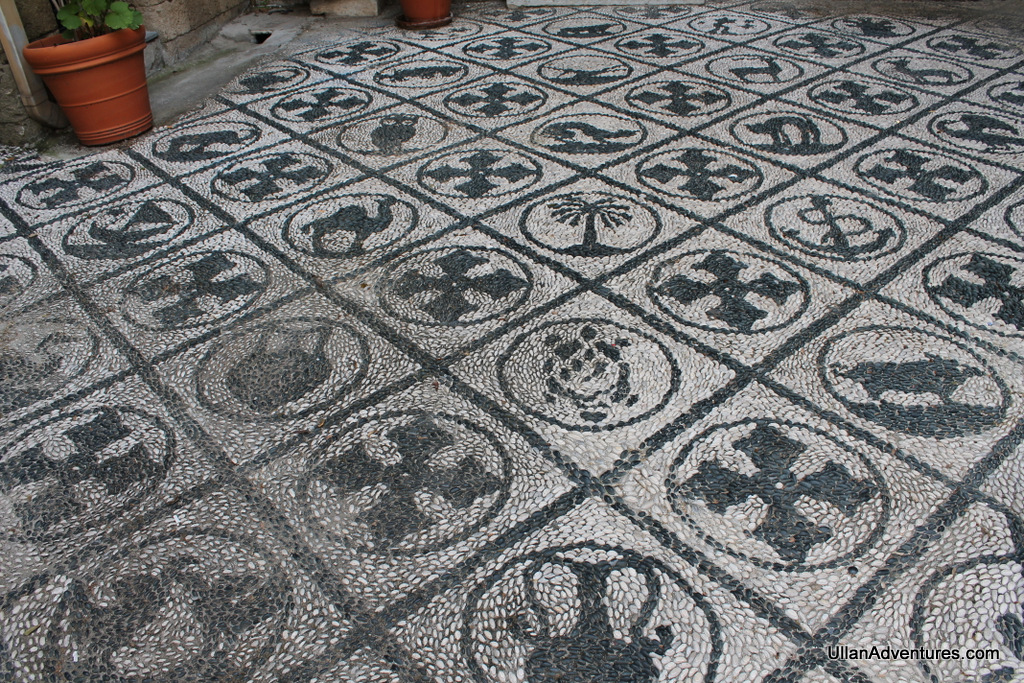 There are a few outdoor spots with old mosaics preserved.

Two days in Rhodes was plenty and I really don’t know what we would’ve done with 2 more days.  Not that there isn’t anything to go see and do, but after schlepping around Europe for 3 weeks, we were happy to explore the old town, the castle and just wander around.  Plus, we were happier to have the 2 days in Santorini rather than here so the trade-off worked out.  That said, I was sad to leave Rhodes and Greece and would love to return some day.

Previous post: The Acropolis and Parthenon in Athens, Greece