On our last border run to Myanmar, we stopped at the Monkey & Fish cave. I wanted to visit on our last trip, but wasn’t able to find any good directions. However, this time Chuck found the way and we thought it’d be a fun 15 minute diversion on our way back to Chiang Mai.

We ended up spending a good 1 1/2 hours there and it became a highlight of our Thailand trip.

When we first arrived and walked back to where the monkeys appeared to be, we saw at least a hundred monkeys descending the cliffs then jumping on the roof of a building before scaling down to the ground we were standing on. Big ole daddy monkeys, teeny tiny baby monkeys that were more careful and would tentatively hang on to a ledge then finally let go only to tumble down a little and grab onto something else, to all sizes of monkeys in between.

And yes, there are fish here as well, but the monkeys steal the show!

Can you see them on the cliffs? There are at least 20 in this picture!

It was amazing to see these wild monkeys in their habitat and just, well, being monkeys.

We saw baby monkeys wrestling with each other, one baby monkey was running and jumped over their mother only to have the mom snatch the baby out of the air and then pull it to her chest, and baby monkeys clutching to their parent’s bodies.

We also saw monkeys cleaning each others’ fur, monkeys fighting with each other, monkeys climbing on things, and even a monkey swimming.

We also got to witness and dog & monkey fight!

You could buy peanuts to feed the monkeys but there were signs up warning not to let kids have the food. They also give you a big stick so you can keep the monkeys from getting too aggressive. And yes, they can get aggressive when it comes to food. Some would take it out of our hands and others were really good catchers and you could throw the peanut and they’d catch it like it was a fly ball.

After we’d had enough of the monkeys we wandered the grounds a bit. There are some other animals there like crocodiles, fish, a peacock and more. And there is a Wat and a very old looking … chedi, I think is the term. There was also a cave you could go into. The setting was beautiful as well with the lush green trees and cliffs.

All in all, it was an awesome diversion.

Location: The Monkey & Fish Cave is located 12km into Thailand from the Mae Sae border crossing with Talichek, Myanmar.  From Highway 1, turn at this sign for Wat Tham Pla on the West side of the road and drive straight for approx 2 km until it dead-ends at the Wat. 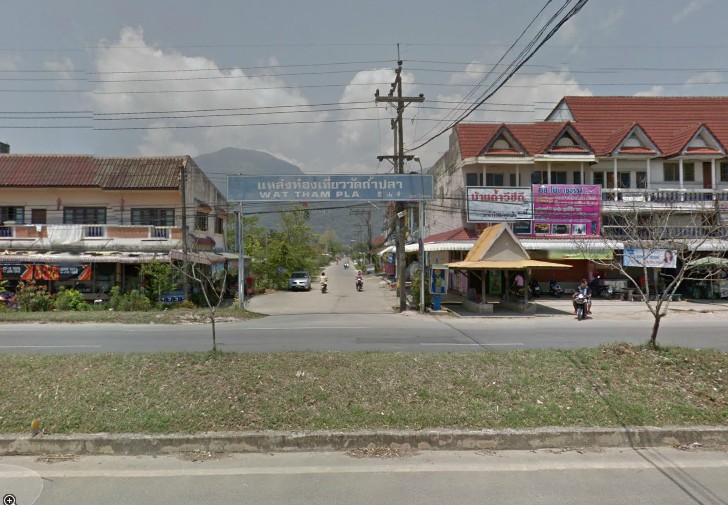 Park outside and walk in.  Head to the left for the monkeys.  Enjoy!