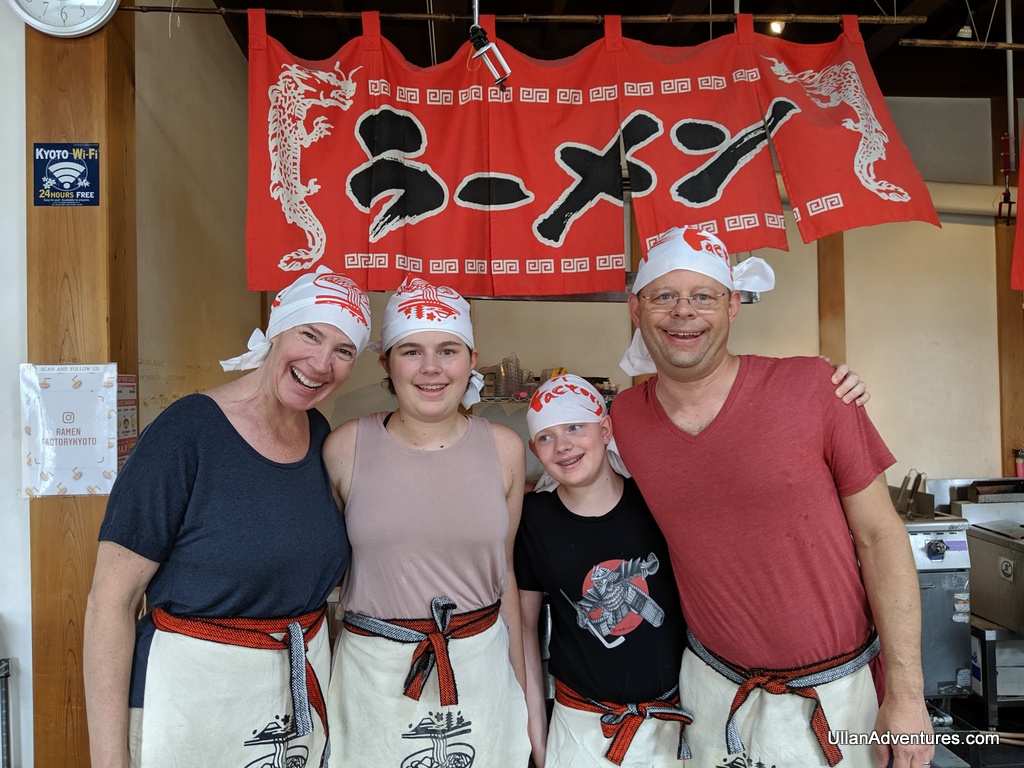 Anyone that knows Beckett, knows that his favorite food is noodles.  Specifically Japanese noodles like ramen and udon.  So it was an absolute must that we take a noodle making class while in Japan!

We took a class with Ramen Factory in Kyoto.  The class was fantastic.  They walked us through every stage of making our own noodles, cooking chicken, flavoring our own soup broth, and then getting to enjoy our creations.

After getting cleaned up and our aprons and handkerchiefs on, we started cooking. 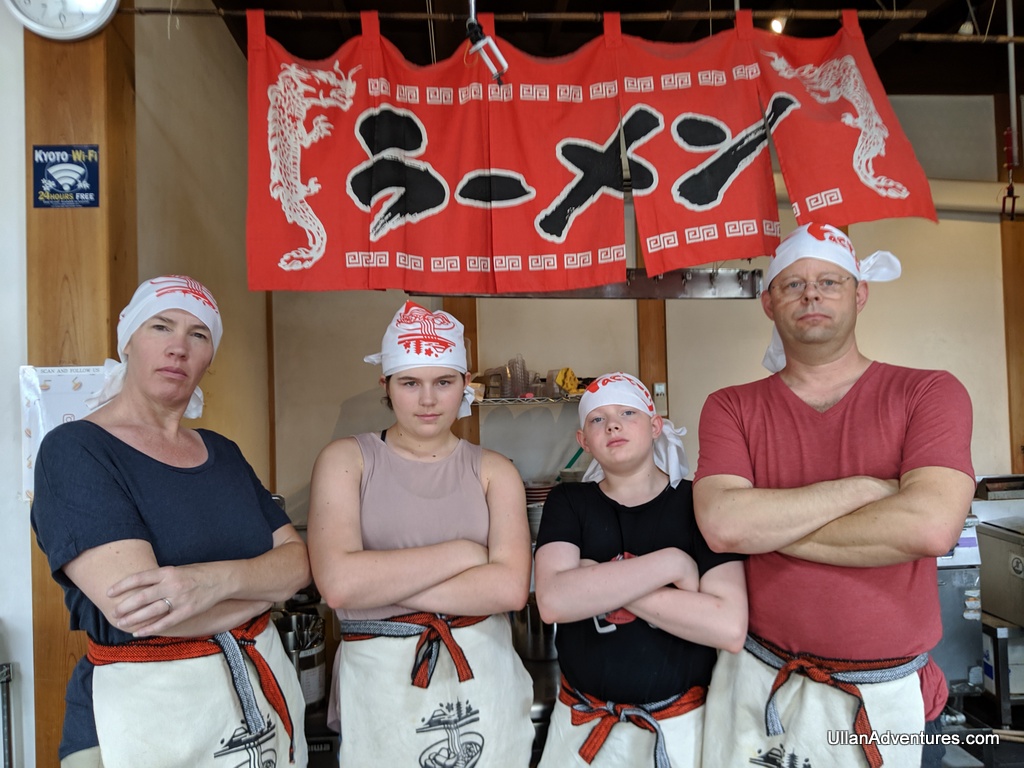 First up was using some cooking twine to tie up some chicken pieces and then they put them in the oven to cook.

Then it was time to make our noodle dough.  The first step was sifting the flour, then mixing it with salt and water. 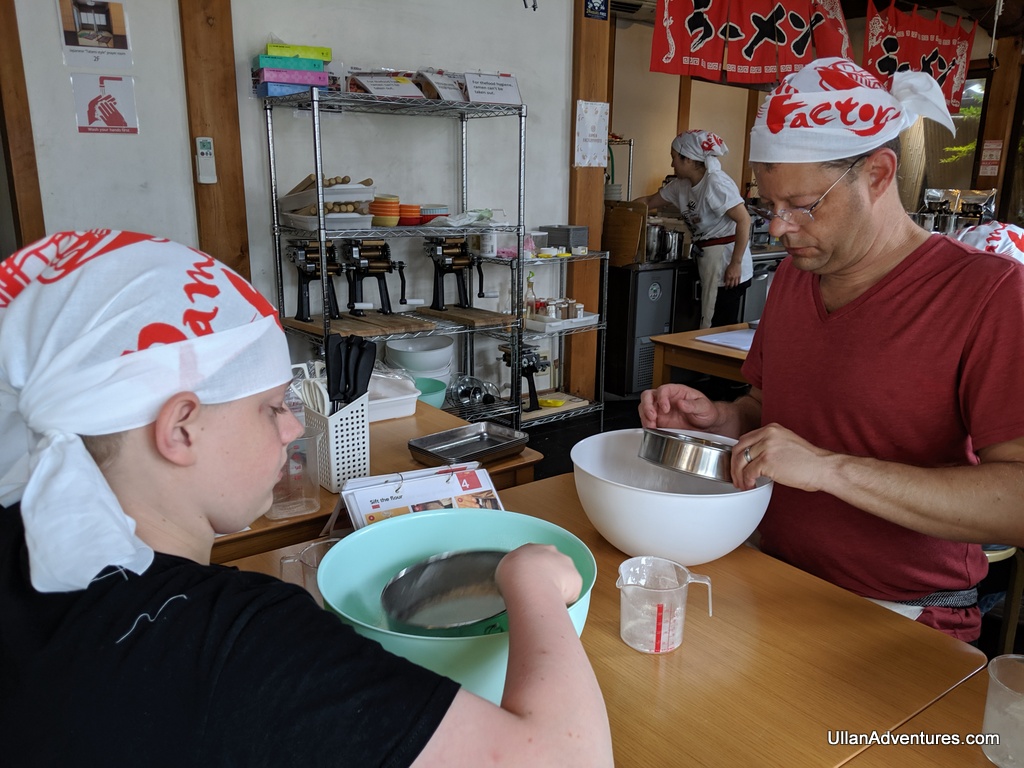 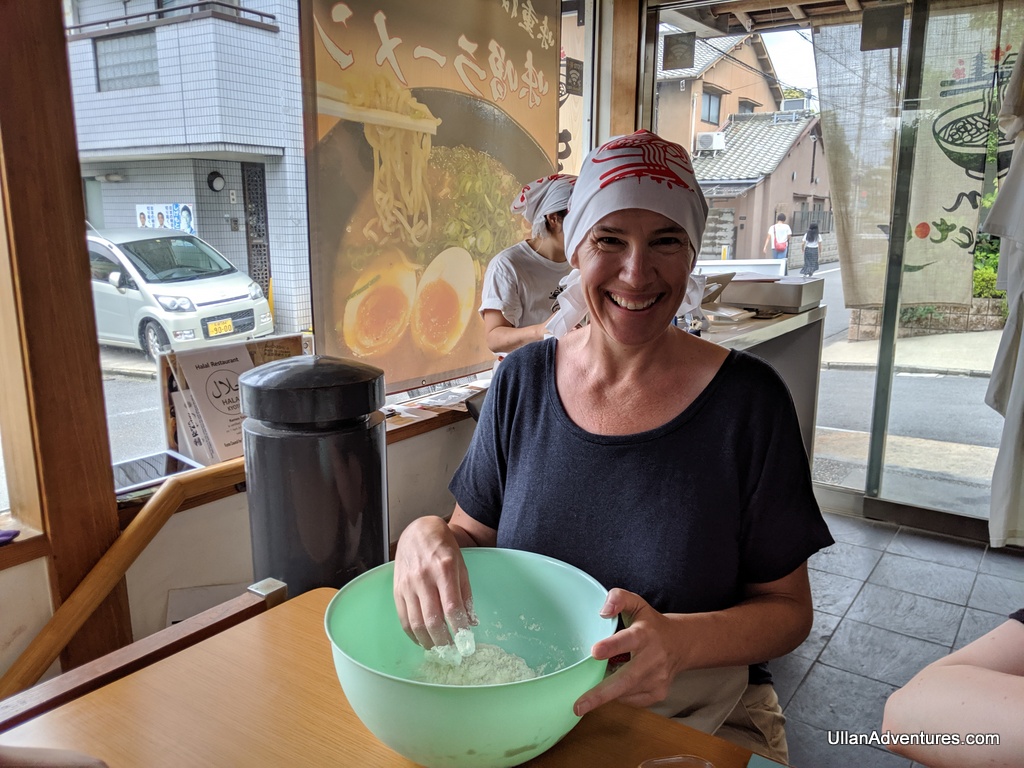 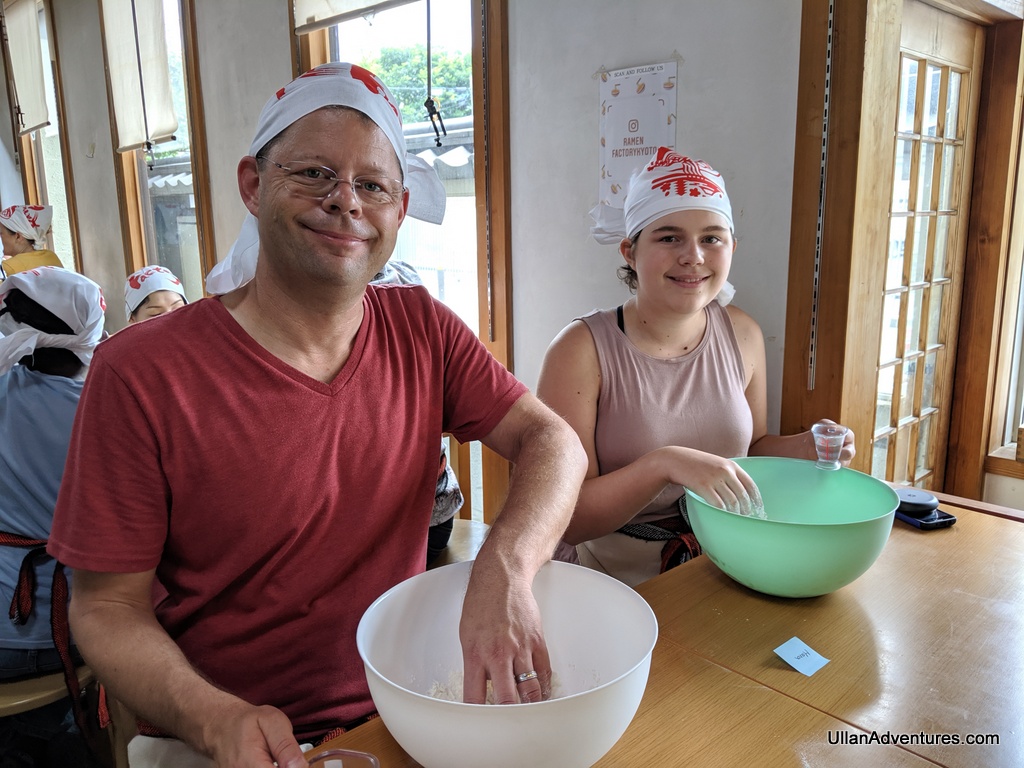 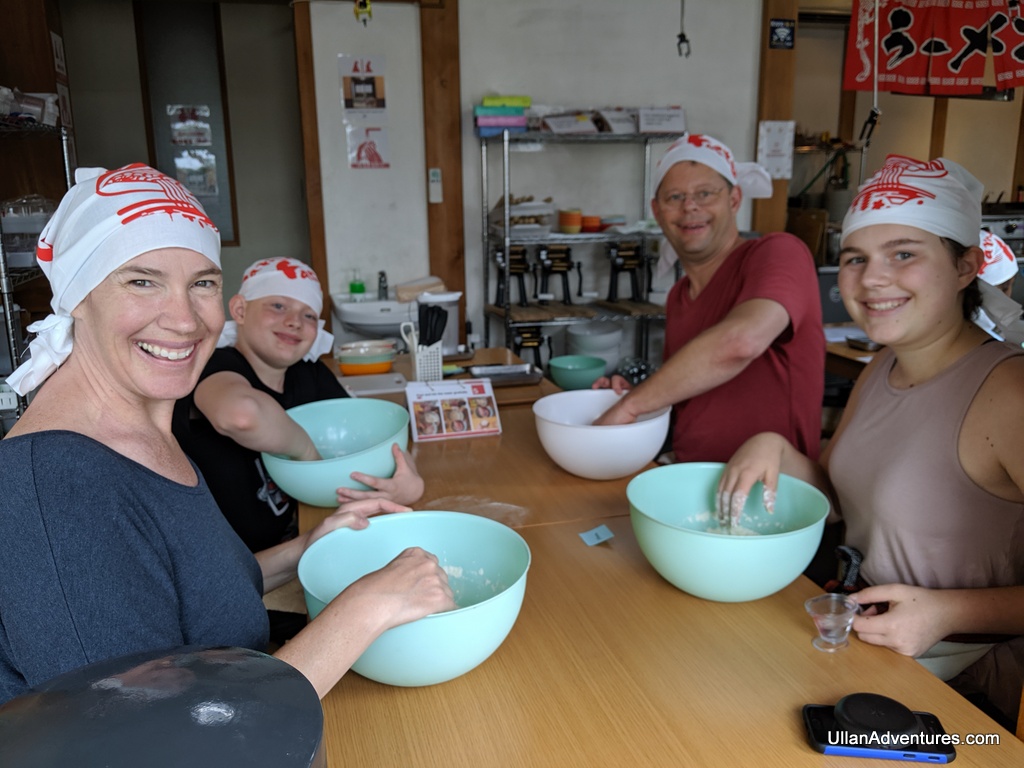 Then it was time to soften the dough by punching it repeatedly for a long time.

Next up was putting the dough through a pasta roller a few times to turn it into long, flat sheets. 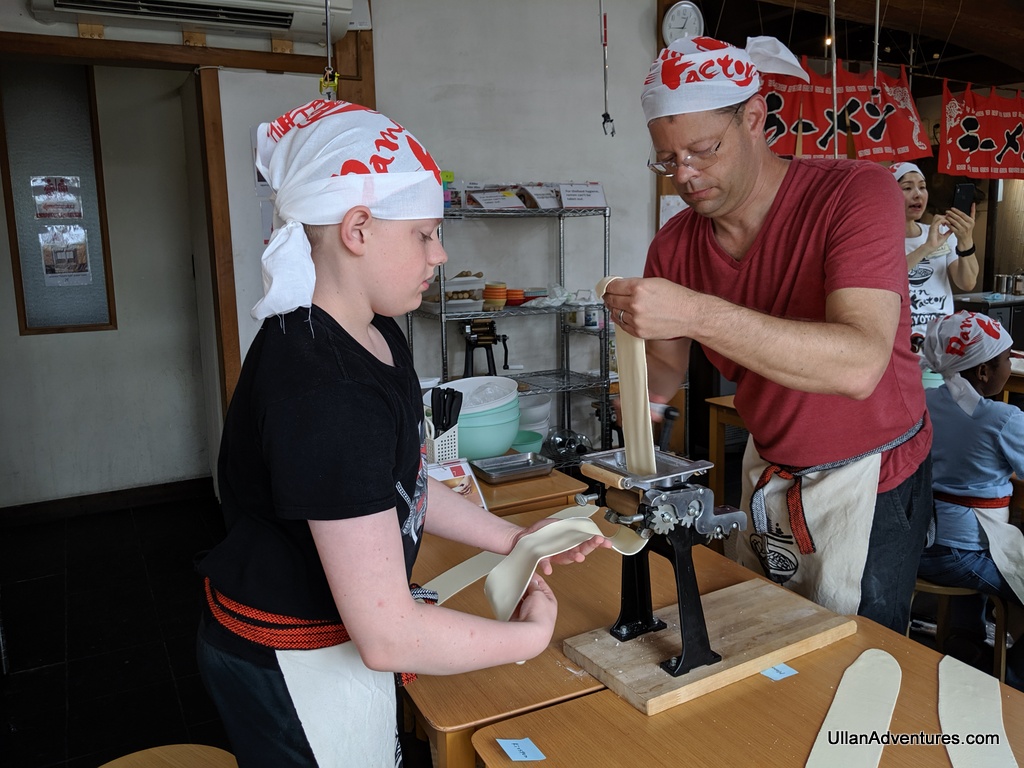 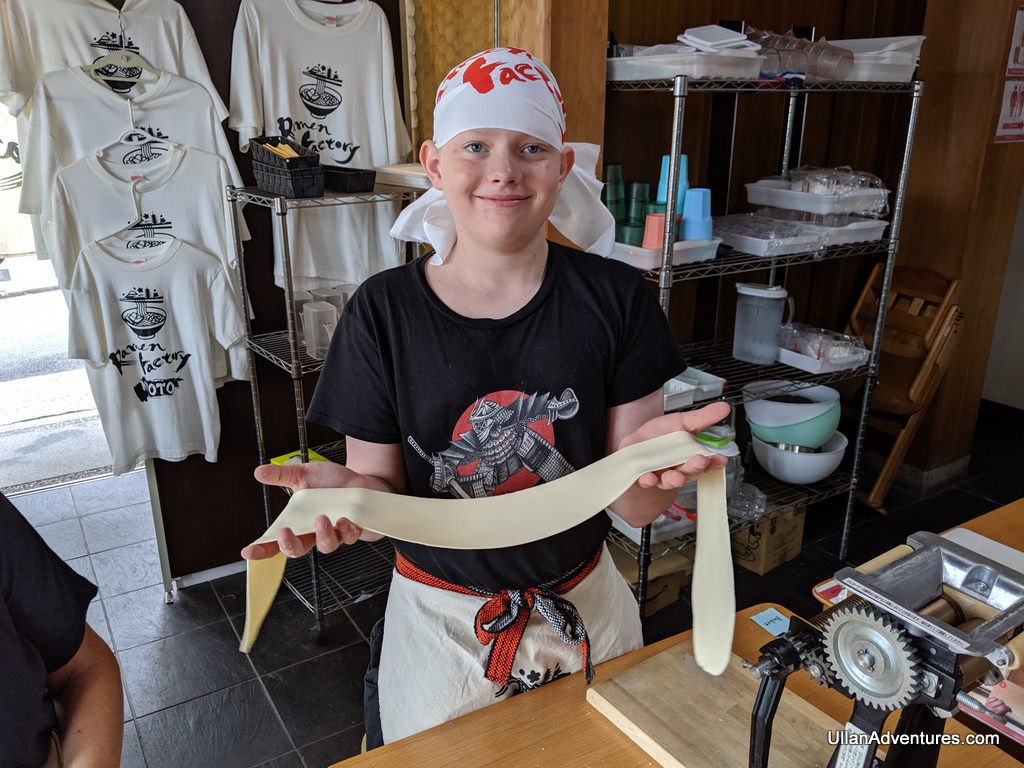 The next step was so much fun as we got to use the pasta machine to cut the dough into long ramen noodles. 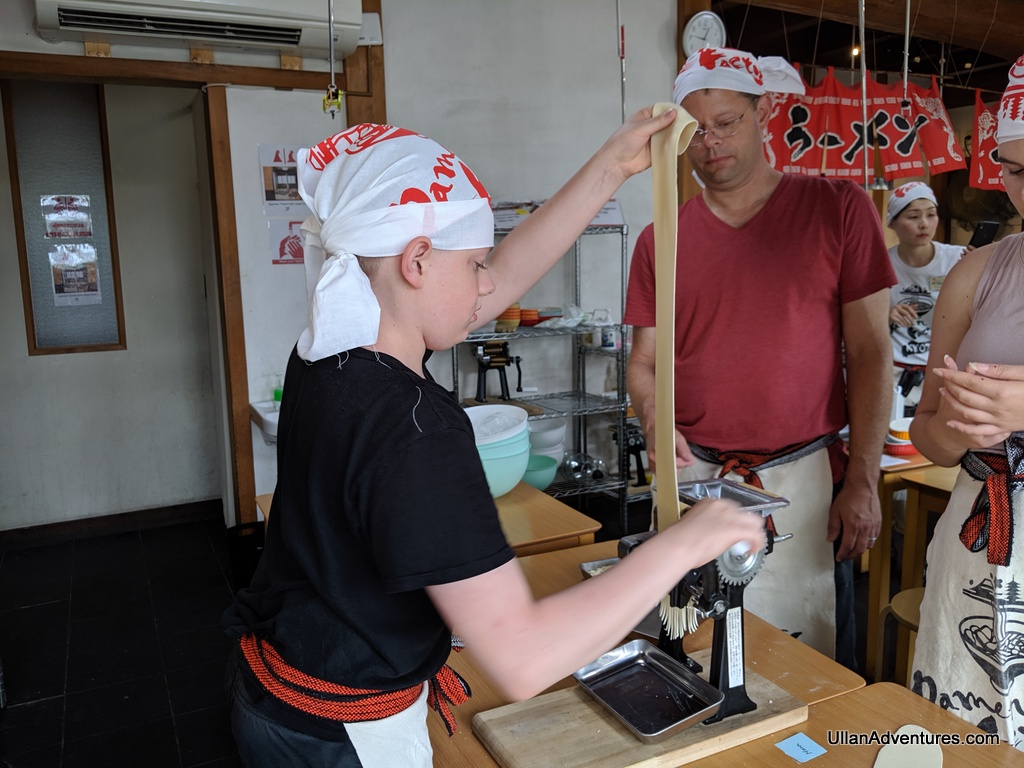 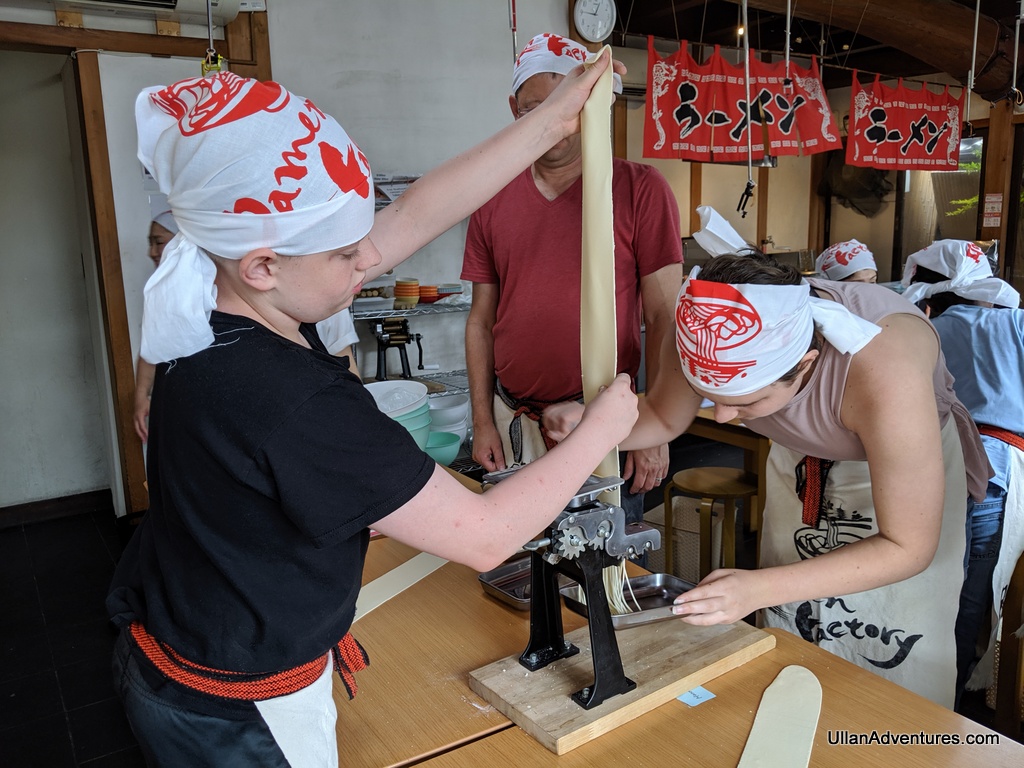 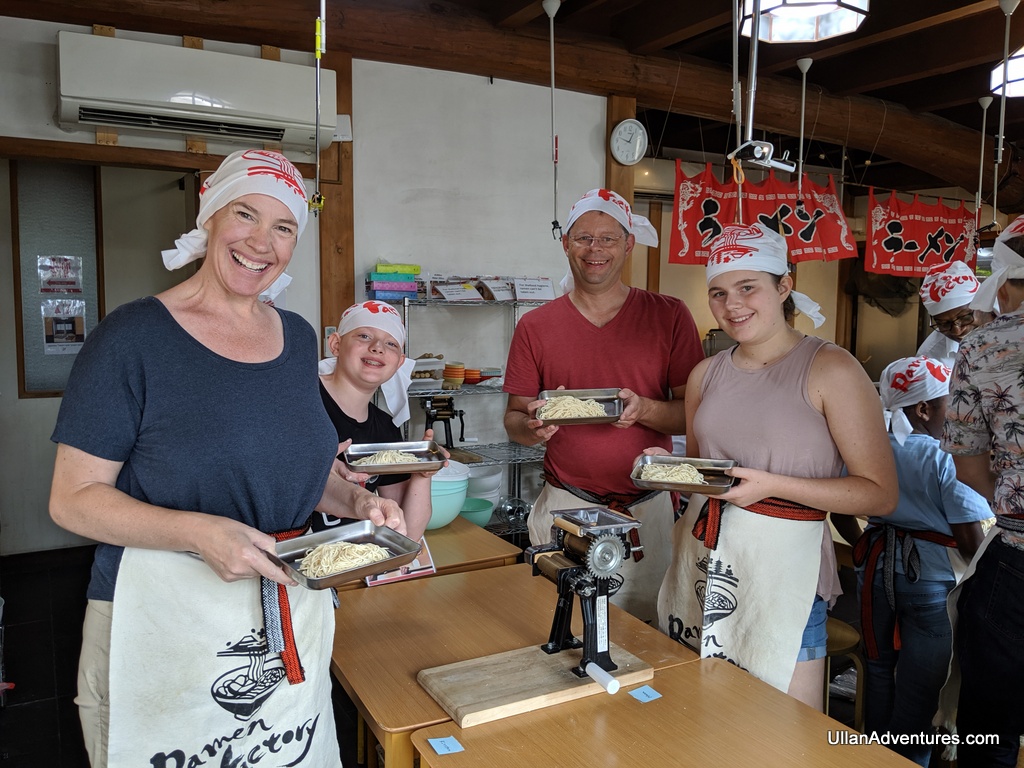 Look at our trays of fresh ramen noodles! 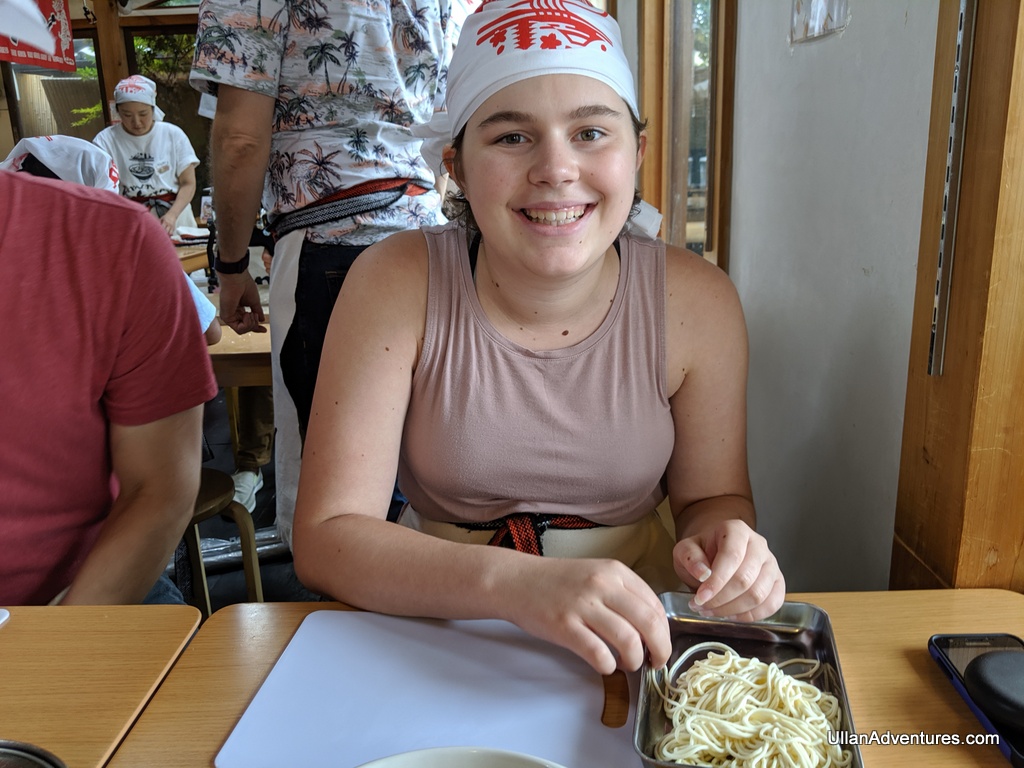 We then got our cooked chicken back and cut it into bite sized chunks before using a torch to flambe the outside of the chicken.  I think this was one of the highlights for the kids.  Maybe not so much for Chuck.

I love Chuck’s body language as Mara uses the torch 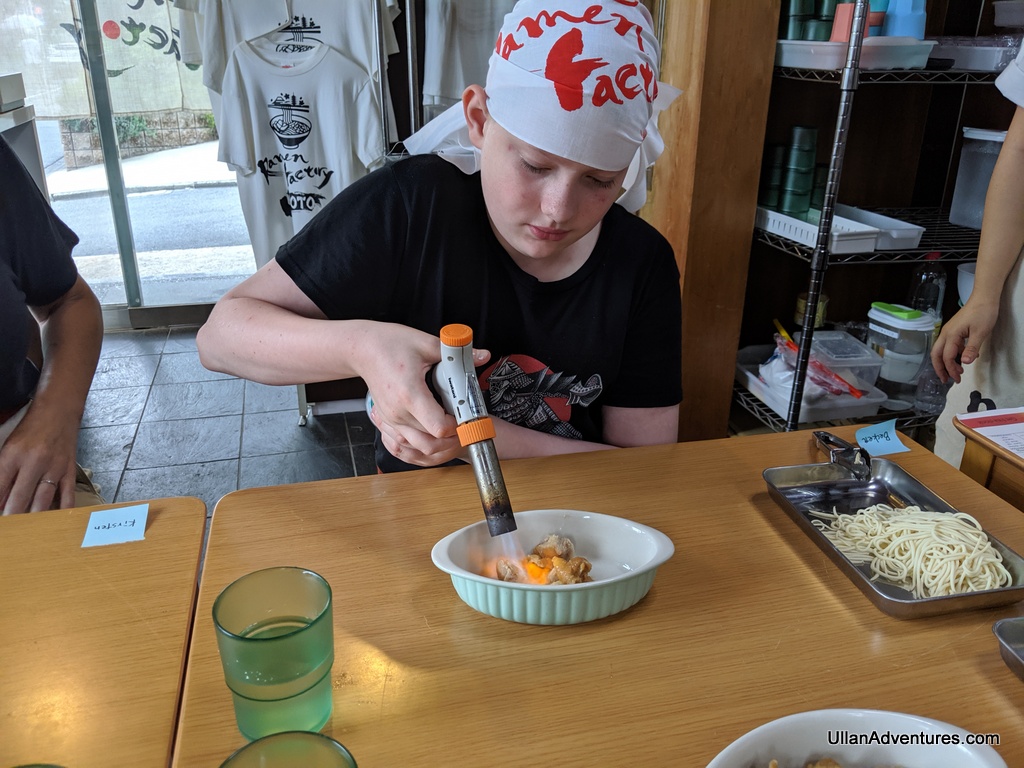 At this point, we took our noodles over the cooking station.  Here we were given a rundown of the different soup bases and were allowed to mix and match the different flavors to make our own custom soup flavor.  I think we all ended up with a different combo.

Then we cooked our noodles.  This involved putting them into a mesh basket, and stirring them in hot water for a minute.

Then we dumped them into our bowls, added our soup bases and soup broth, and returned to our table for the finishing touches. 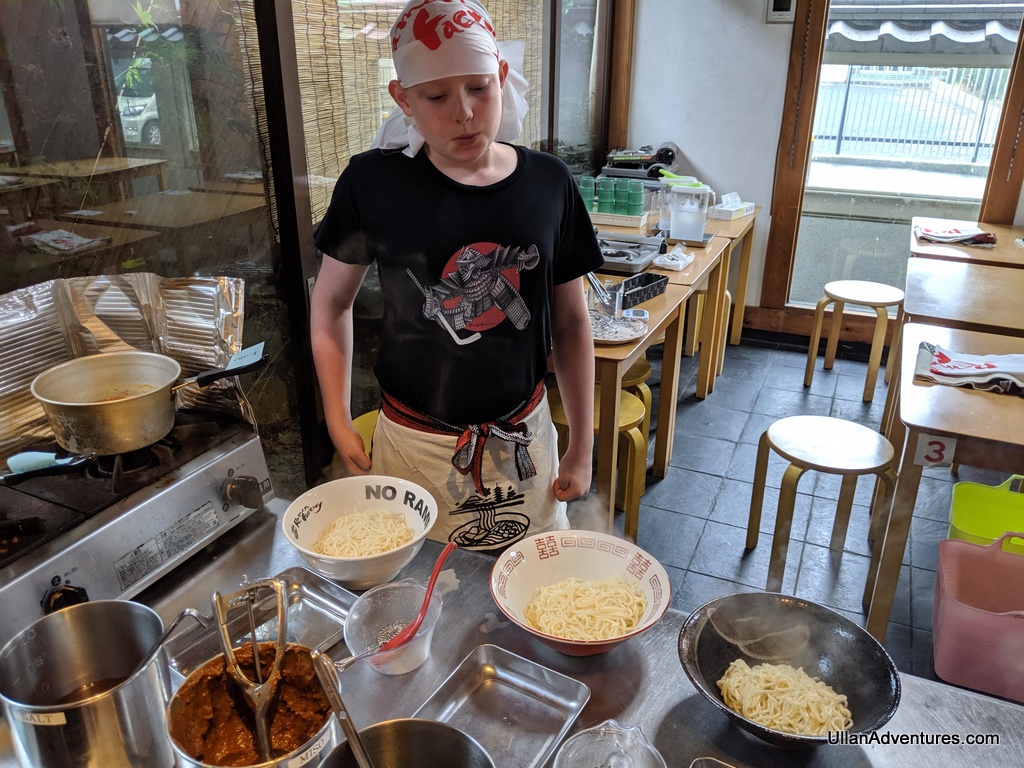 After adding the chicken and condiments, it was finally time to eat!!  OMG was it delicious.  The noodles were so good and fresh and it was one of the better ramens I’ve ever had. 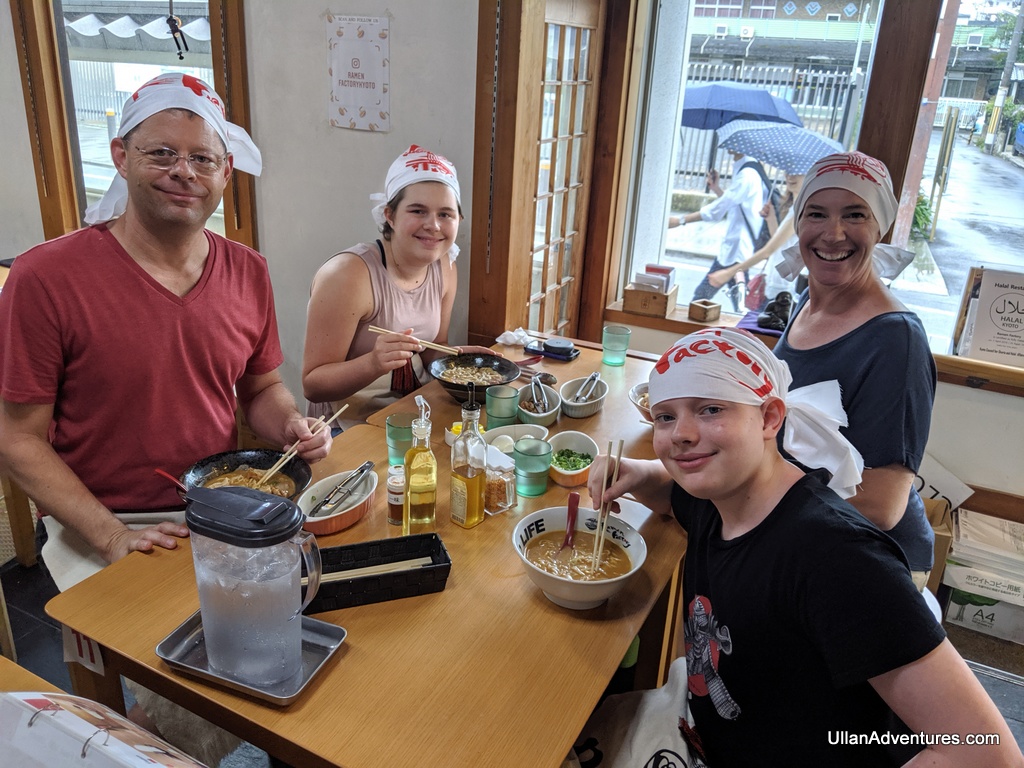 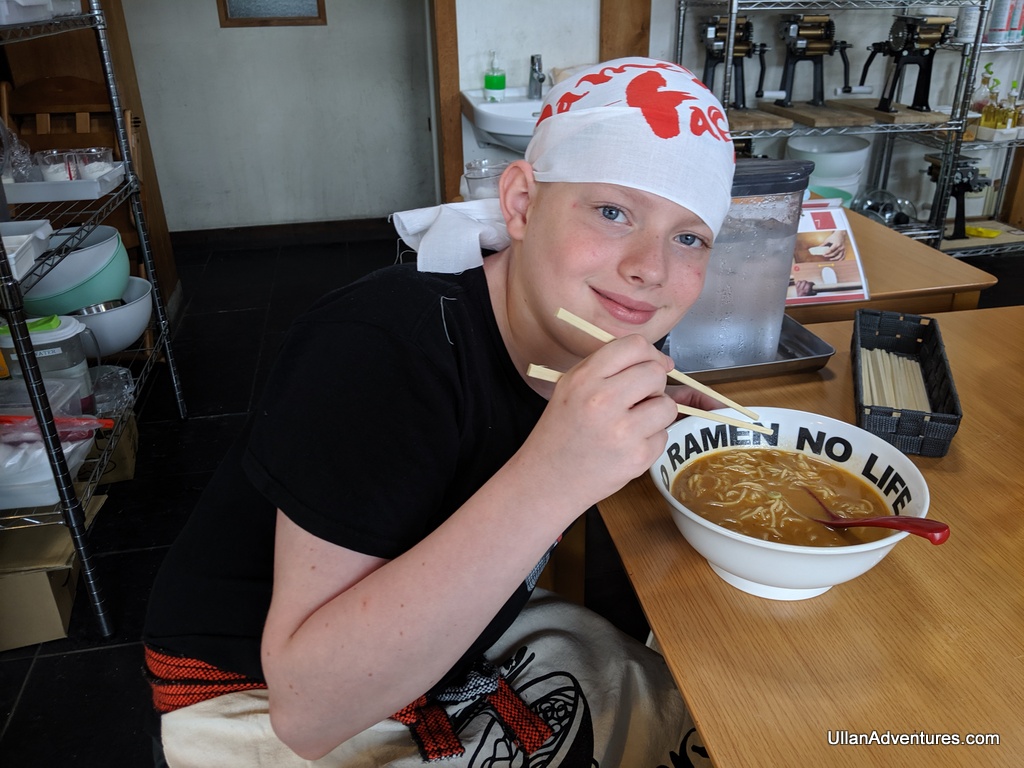 Once we were done eating, we decided that we just had to buy a souvenir bowl to bring home and a t-shirt for Beckett especially since their slogan is pretty much Beckett’s mantra: “No Ramen No Life”. 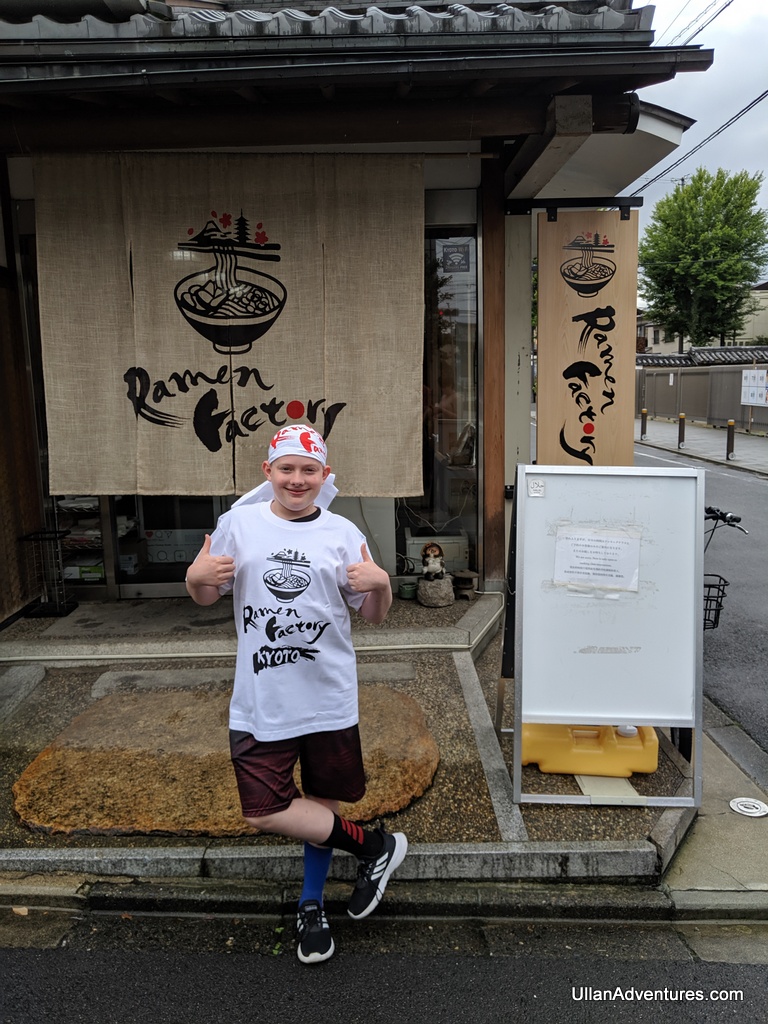 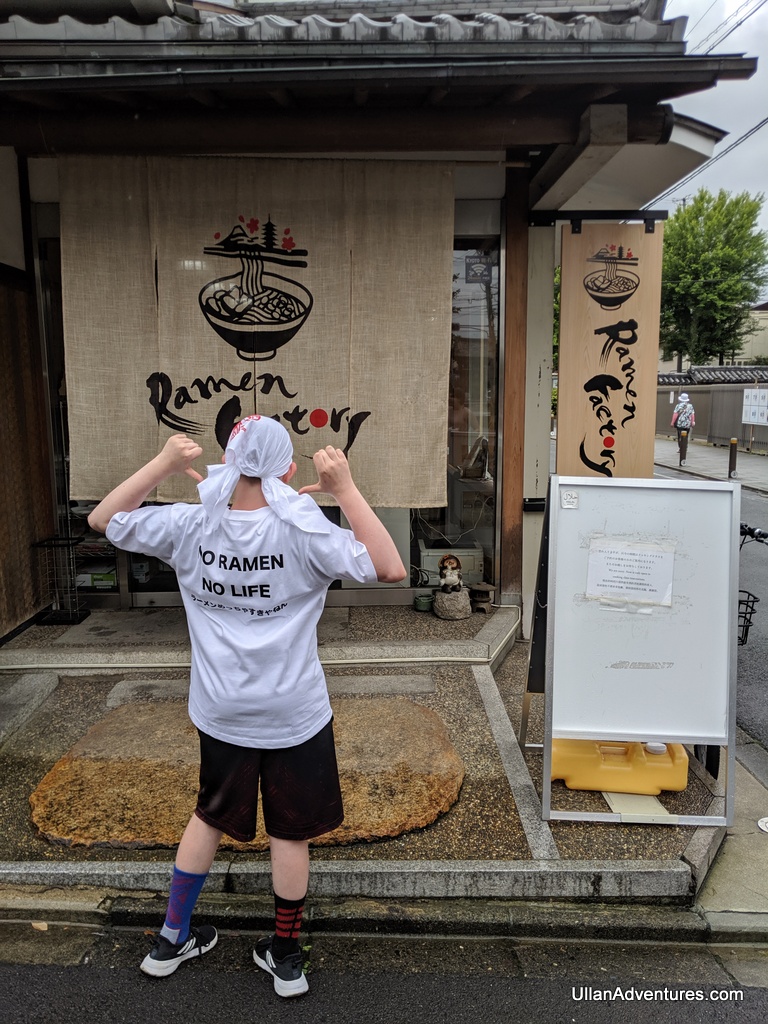 Once we came home, Beckett started using their ramen recipe to make his own ramen.  For Christmas he got an electric pasta roller and noodle cutter and has continued to make his own fresh ramen.