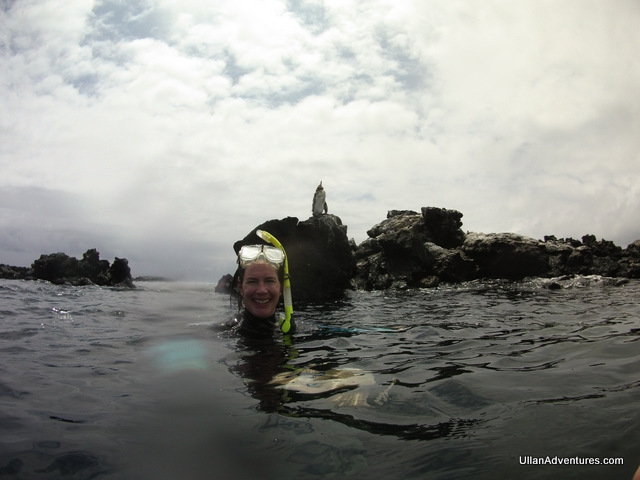 Before we came to the Galapagos, we each picked which experiences we most wanted and also which animals we most wanted to see.  Near the top of my list was penguins!  Yes, they have penguins in the Galapagos!  They can only be found on 2 islands but only 1, Isabela, is (semi-)easily accessible to those doing a land based tour.   We knew adding a 3rd island to our trip was going to keep us really busy, but I  didn’t want to miss the chance to swim with wild penguins, so we figured out an itinerary that included Isabela and figured out that snorkeling at Los Túneles, aka The Tunnels, was the best place to go.

Los Túneles is about a 45 min boat trip from Puerto Villamil, which is the main town on Isabela.  It’s a rocky trip out but we were lucky that it wasn’t too bad on the day we went.  We were also REALLY lucky that we had some great animal sightings on the trip out.  We saw a massive manta ray somersault out of the water twice, a baby hammerhead shark, and mating turtles. 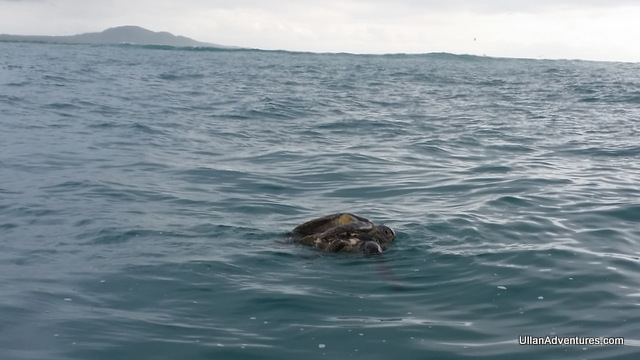 We first stopped at an area outside of the Tunnels where we snorkeled for 2 hours.  There weren’t that many fish or even coral, however, there were a lot of other cool things: Huge sea turtles munching away, lots of reef sharks hanging out in a cave, a marbled ray, a massive lobster (thing had to be 5lbs!), a big parrotfish, and a really cool eel that looked more like a sea snake than an eel.  However, the highlight of this snorkel, for me at least, was seeing a seahorse!

I also found one of the more interesting things I’ve ever found in the ocean – a $5 bill.  If you don’t know, I tend to find money all over the place and have found random money in many of the countries we’ve visited even if we’re just there for a few hours.  Usually it’s pennies or some other small coin, but this time, it was a $5 floating in the water.  I asked our group who lost money out of their pocket and no one had so they clapped for me and my good fortune. 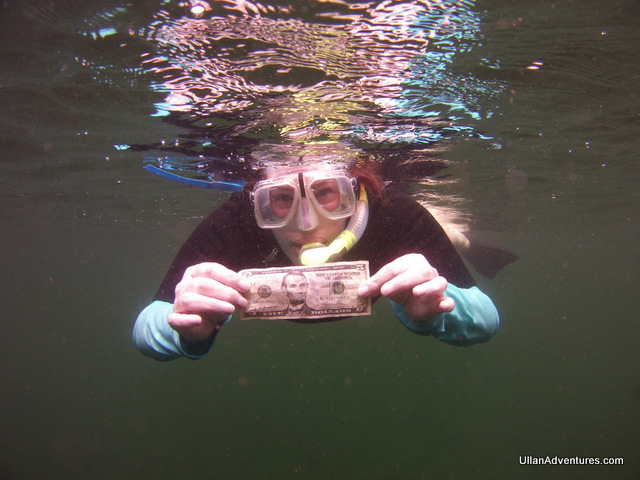 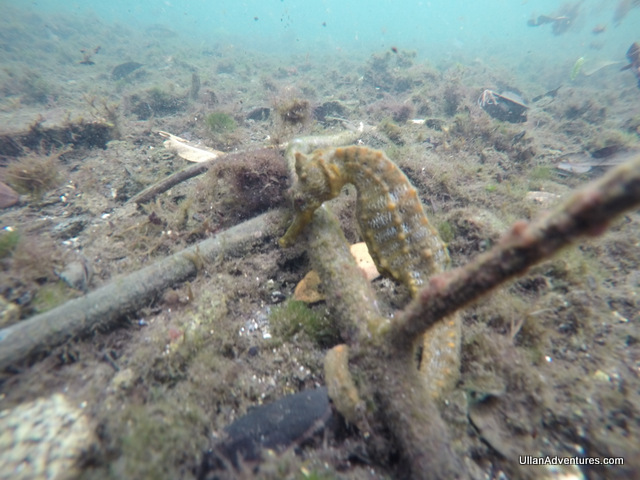 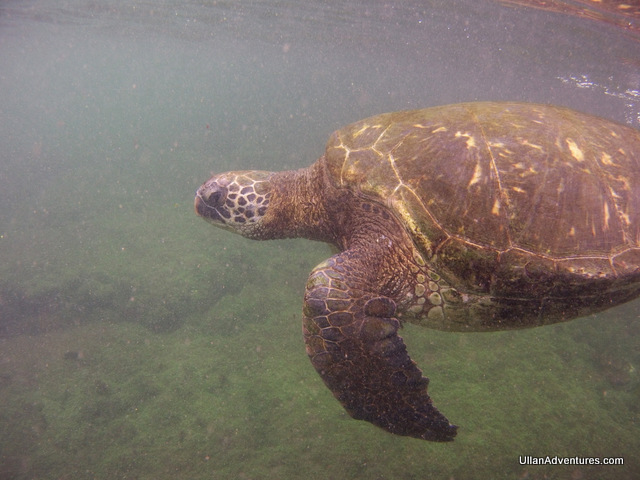 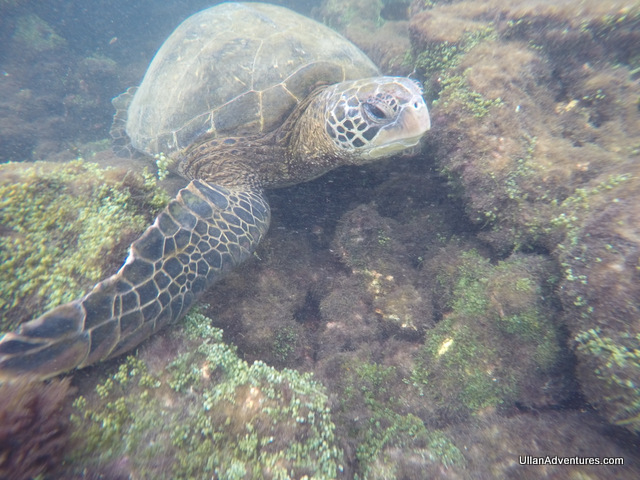 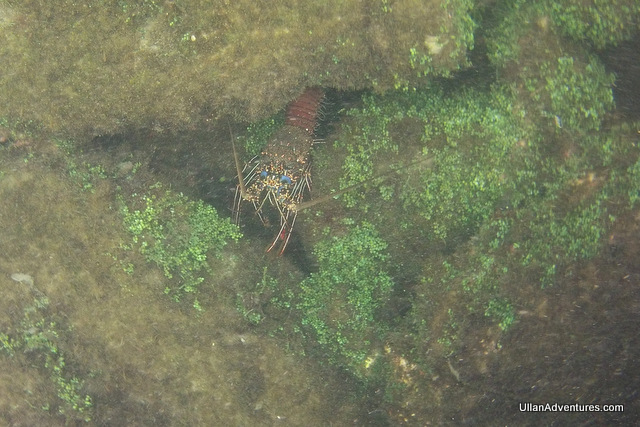 Eel that looked a lot more like a snake 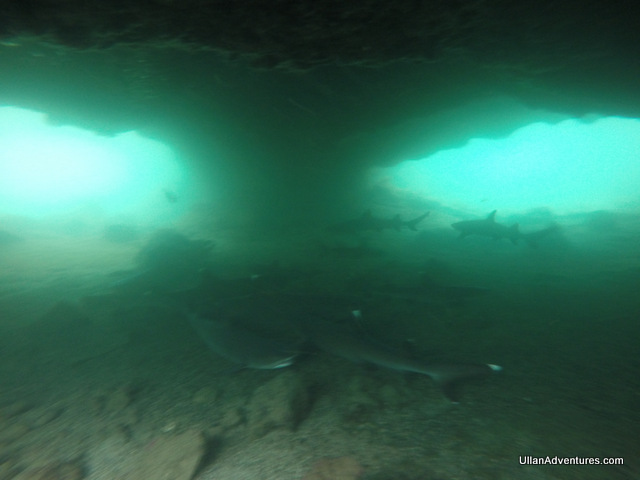 9 Whitetip reef sharks in a cave

After our snorkel, we headed over to The Tunnels to see the penguins.  We weren’t sure if we’d be able to get in as other boats were having trouble, but our captain surfed us in no problem.

I was so excited to see the penguins and we quickly got into the water to get a closer view.  Unfortunately, we didn’t see any penguins swimming in the water as they were content to hang out on the rocks. 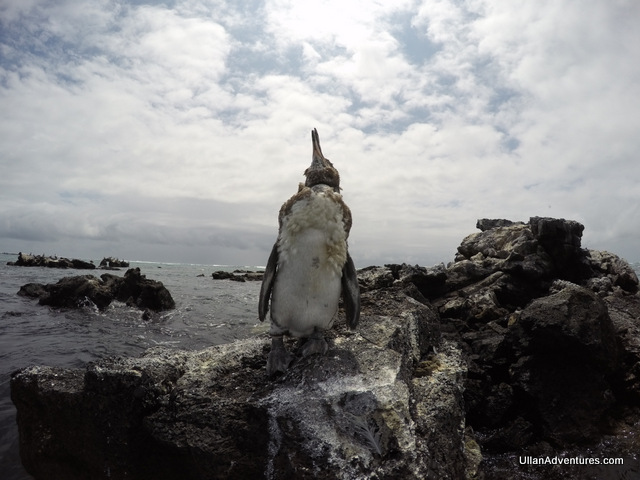 There were also blue-footed boobies hanging out on the other rocks, so we were able to swim near them for a closer view. 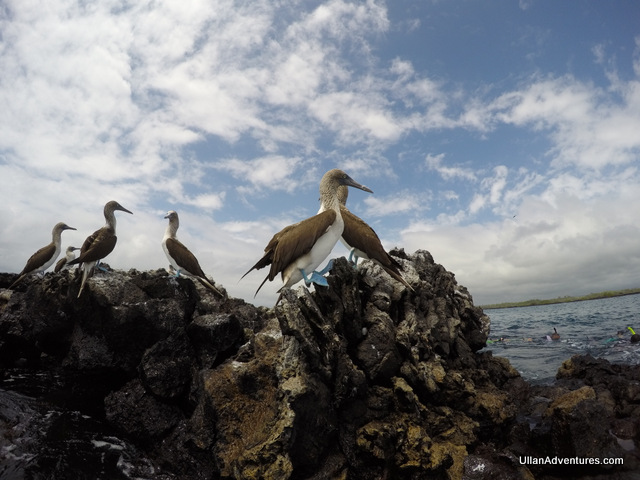 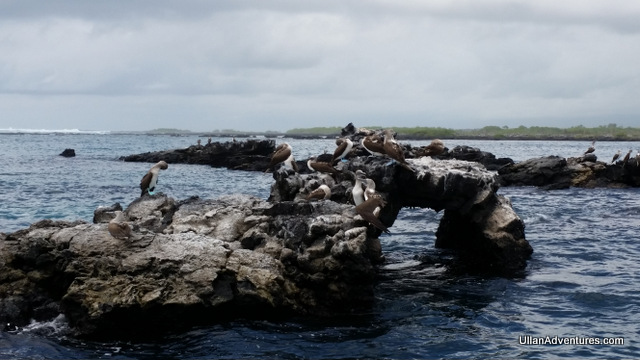 A pelican then flew in and landed on one of the rocks.  So cool! 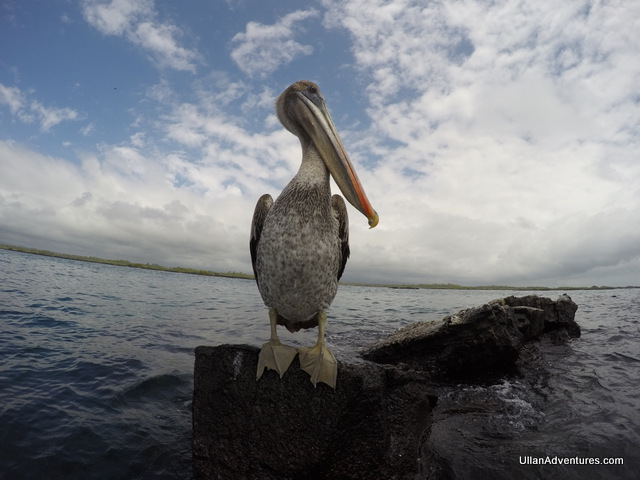 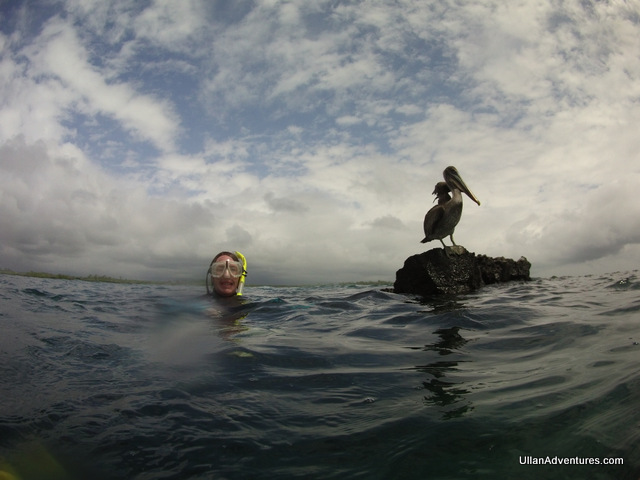 After snorkeling here, we headed over to the actual Tunnels which were so pretty.  We ate a quick lunch then headed up on the rocks for a look around. 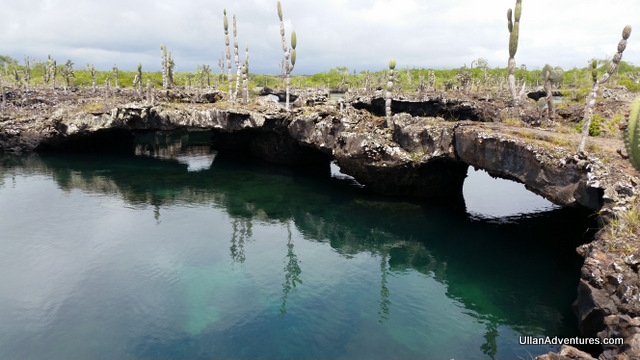 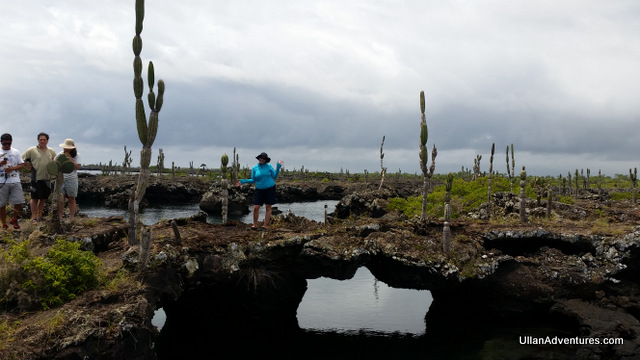 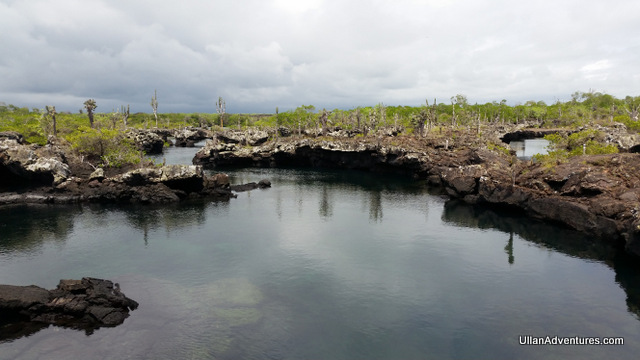 Then it was finally time to head back to Puerto Villamil.  However on the way we were treated to some jumping manta rays.

We then came upon a rock that had Nazca boobies alongside Blue-footed boobies.

Then it was back to the dock and our hotel.

Logistics: We booked our trip with Scuba Galapagos which is located in The Wooden House hotel.  I was able to arrange the trip via email before we left the US.  The trip was $90USD pp which included lunch.  The good: They were really good at spotting wildlife.  The bad: the boat didn’t have a bathroom or any shade which would be nice on a 6 hour trip, lunch was a warm ham sandwich, and we had a 1Km walk home from the dock after the trip.  Lastly, the guides spoke both Spanish and English, however, most of the people on the boat spoke Spanish so they didn’t bother to translate as much into English for us English speakers.   This made us feel a little clueless on some things and ignored other times.  Overall, they wouldn’t be my first choice, but they were a fine choice and we had a magical day so I really can’t complain. 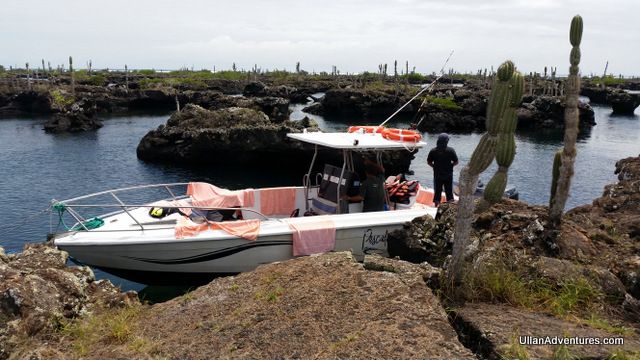