Diving with Hammerheads at Gordon Rocks 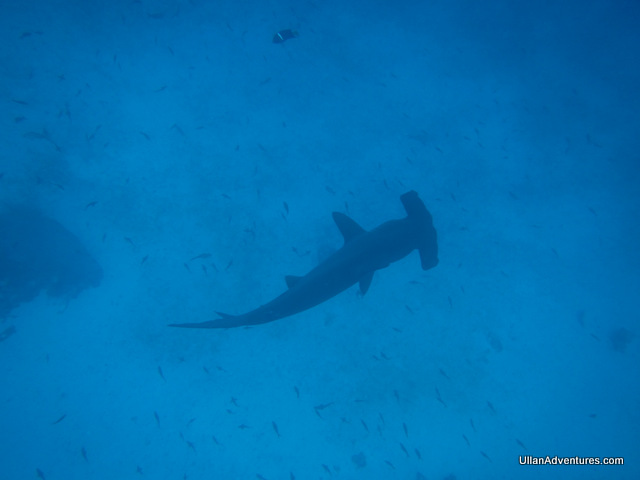 One of the things we were most looking forward to on our trip was diving with hammerhead sharks.  We had 2 chances – one at Kicker Rock off of San Cristobal and the other was at Gordon Rocks off of Santa Cruz.

Gordon Rocks is known as “THE” place to dive with schools of hammerheads in the Galapagos without doing a live-aboard.  It is also considered an intermediate to advanced dive due to currents (it’s nickname is the “washing machine”).  Most of the good dive shops won’t take anyone with less than 30 dives (I’m at 40+, Chuck is at 30-ish) and they make sure you’ve been diving recently too.

I’ll admit, I was actually nervous about this dive.  I think I read too many stories online about the dive being difficult and even a case where a diver got swept a few miles away by the current (they found her a while later).  Someone online was also telling a beginner that wanted to dive there to “Google ‘Gordon Rocks’ + death” as apparently people have died there.  So yeah.  Crazy current, being known as a “washing machine”, people dying, advanced dive credentials required.  Oh and schools of sharks.  Yep, I was a bit nervous.

At least my nerves were calmed when we went to the dive shop the previous day to get outfitted for our equipment.  Once they heard we dove Kicker Rock a few days prior and had plenty of dives under our belt, they said we’d be fine and it’s only horrible a few days a year.

The morning of, we took a pickup truck taxi to the ferry landing at the north end of the island then headed out on the boat. 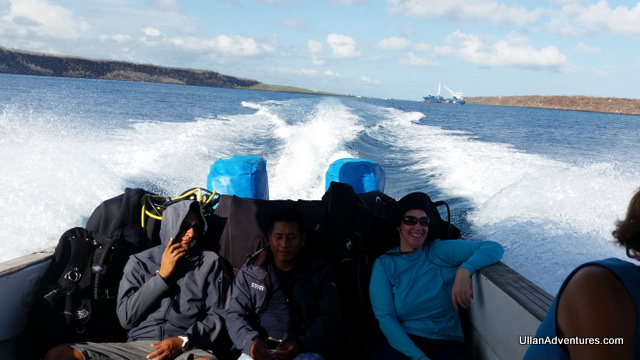 After about 45 min, we stopped to do a check dive.  Then we took a 5-10 min trip over to Gordon Rocks.   After about 5 minutes of the crew checking the current, it was time to go.

The dive entrance was different than normal because of the current.  Our group got ready, sat on the side of the boat and waited.  When our dive guide said “Go”, we immediately back rolled into the water, met at the back of the boat and descended quickly so the current didn’t sweep us away.

As soon as we got down to about 40′, I saw 2 hammerheads swim by on the sea floor (they were about 60′).  And, that was the only hammerhead shark sighting we saw the entire dive.  Sigh. 🙁

We swam around for about an hour but really didn’t see much: a sea turtle, others saw a golden ray, some fish.   Very disappointing.  The current wasn’t too bad though so that was good. 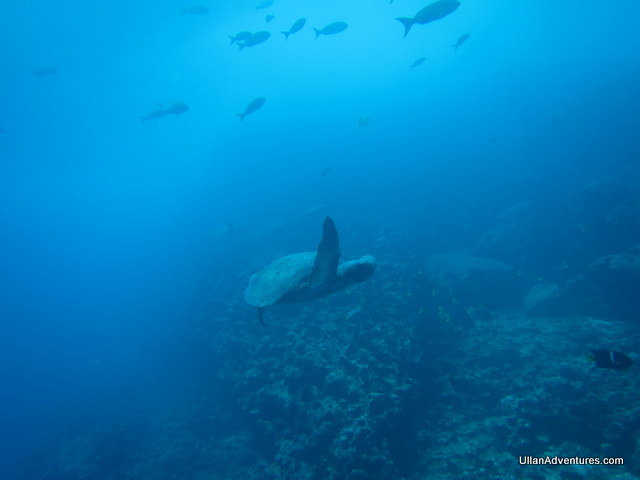 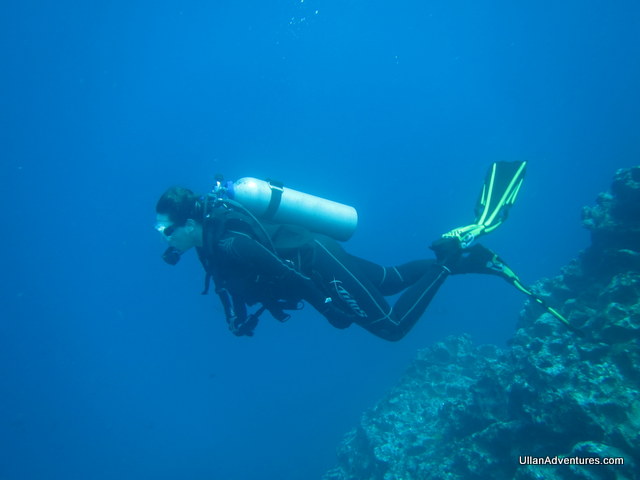 We were bummed coming back to the boat and got more bummed when we found out the other group saw a huge school of hammerheads.   Guess we just weren’t in the right place at the right time.

After an hour surface interval (that was quite wavy and making me nauseous), it was time for dive #2.  We knew the hammerheads were out there so our fingers were crossed.

Not long after we descended, we started seeing the sharks.  Hammerheads, Whitetip reef sharks, Blacktip reef sharks, Galapagos sharks.  Some were together maybe 20′ away, some were alone maybe 10′ away.  Plus we saw a pair of spotted eagle rays.  THIS was the dive we were hoping for.  I was so calm yet excited when I saw the hammerheads.  I kept saying to myself “I can’t believe I’m seeing this.  I’m so lucky.” 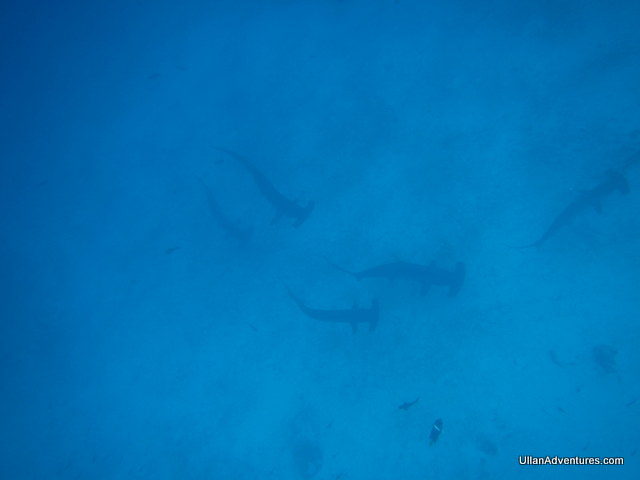 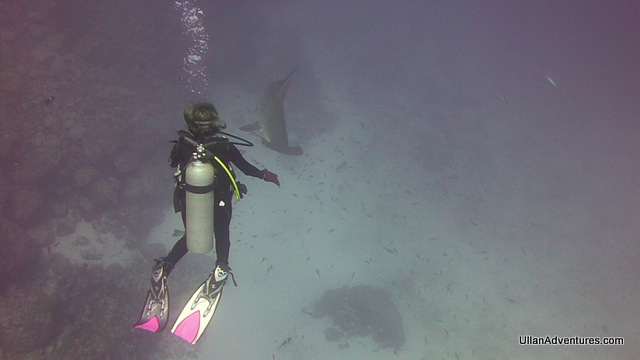 Not me, but another girl in our group.  Look how close! 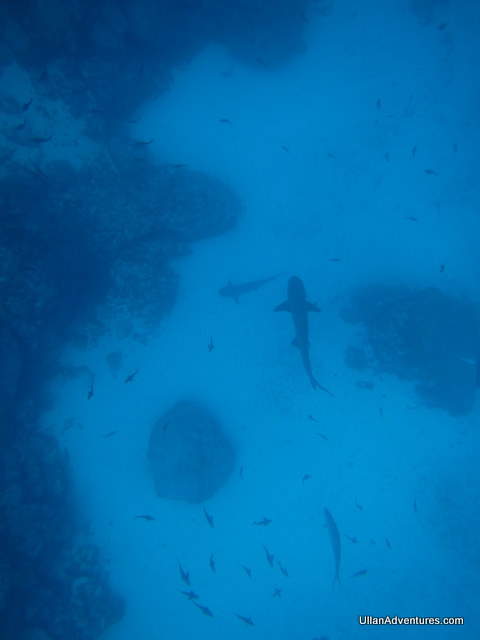 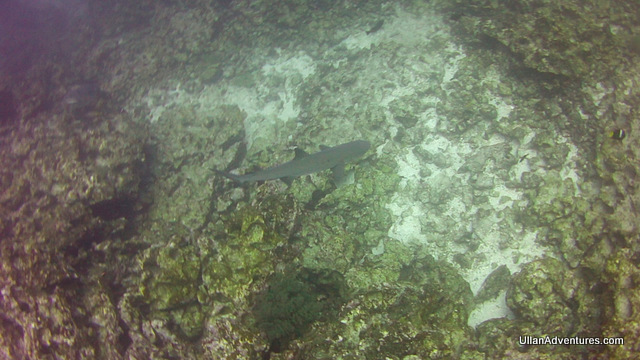 There was definitely more current on this dive but nothing too bad.  The only interesting thing was the up/down current that would make you ascend or descend a bit.  It was subtle for me but Chuck got caught in it a bit more.  Nothing too scary or a big deal, but I can totally see why this is an advanced dive.

Soon it was time to get back on the boat and head back to Santa Cruz.  We were treated by a whale sighting on the trip back.  At first they said it was a baby humpback whale, but I’ve seen enough of them to know it was something else.  When I saw the head, I thought it was a pilot whale.  But watching the video back, I’m starting to think it was a beaked whale, maybe a Cuvier’s beaked whale.  Not sure, but still a cool sighting.

After lunch back at the harbor, we took the trucks back to the main town and that was that.

Logistics: We went diving with Academy Bay Diving out of Puerto Ayora on Santa Cruz.  They did a pretty good job so I’d definitely recommend them.  We met at the dive shop at 6:30am, left the shop at 7am and returned around 2:30pm.