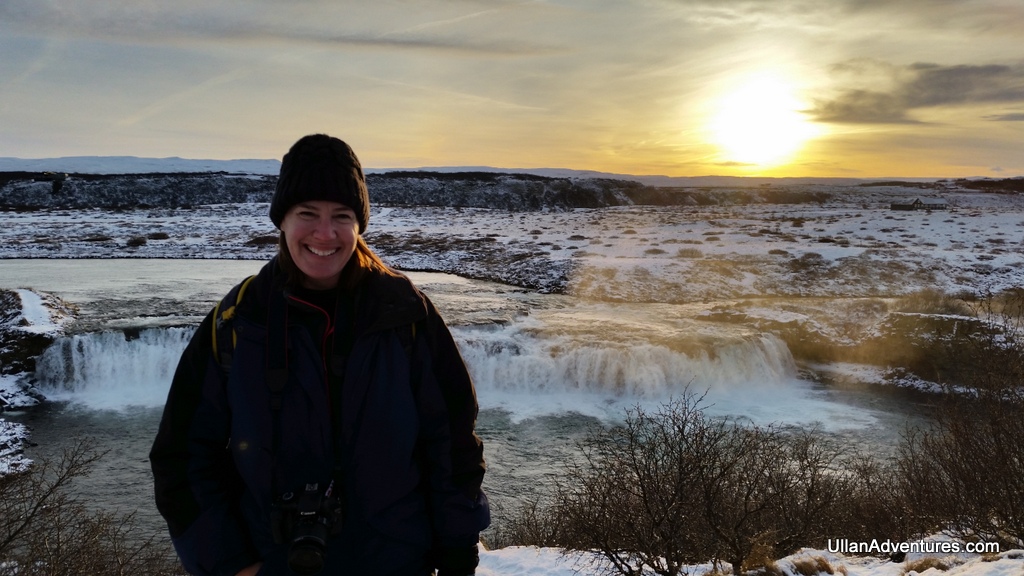 One of the most popular tours in Iceland is the Golden Circle tour.  It combines waterfalls, landscape, geysers, and more on an all day trip around the eastern part of Iceland.

I was picked up at 8:30am despite it still being dark outside (the sun doesn’t rise this time of year till 10:15am), and we got on our way around 9am.  We drove about 45 minutes to the town of Hveragerð which is built on a hot spring field.  We stopped at a rest stop for about 15 minutes for a bathroom and coffee break before heading out.  There was an earthquake in 2008 that split the floor at the rest stop.  Instead of fixing it, they put plexiglass over it so you could see into the crack in the earth.  Kind of cool.

From there, we headed east about an hour to Faxi waterfall.  We stopped along the way to get pictures of the sunrise as it was too beautiful to miss. 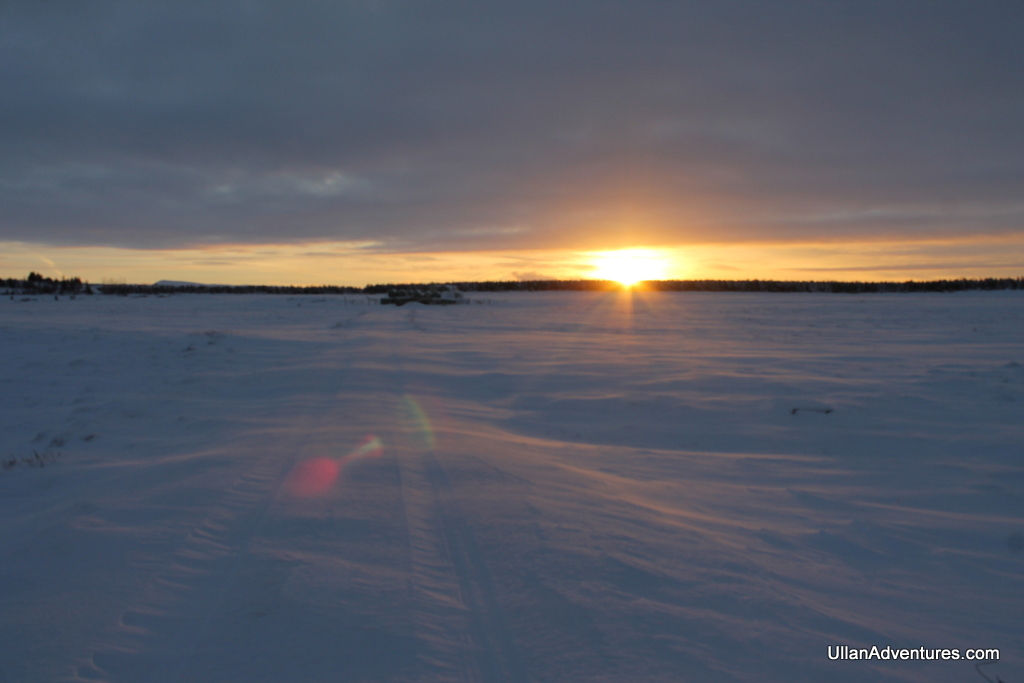 Upon arriving at Faxi waterfalls, we were given crampons to use while walking on the icy ground.  They were invaluable as we would’ve been slipping around like the other tourists.  We only stayed maybe 20 minutes which was plenty of time to take in the falls. 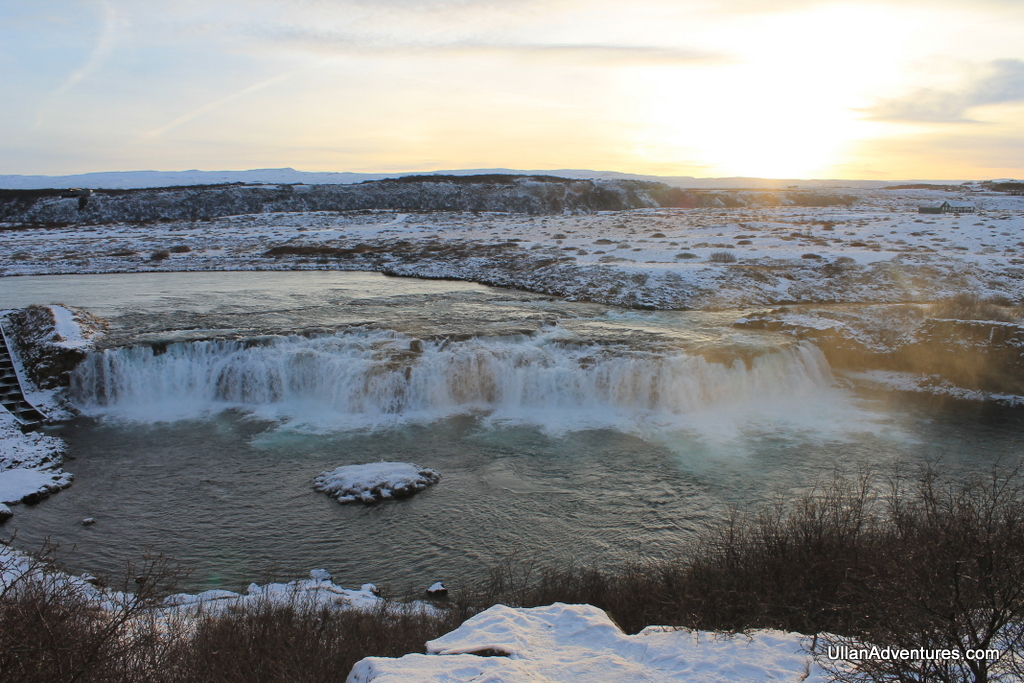 From there it was another good hour or so to our next stop – Gullfoss waterfall!  Here we were dropped off below and then walked up to get a view from a higher vantage point.  It was beautiful, but quite cold, so after about 45 minutes I was grateful for the shop at the top to warm up! 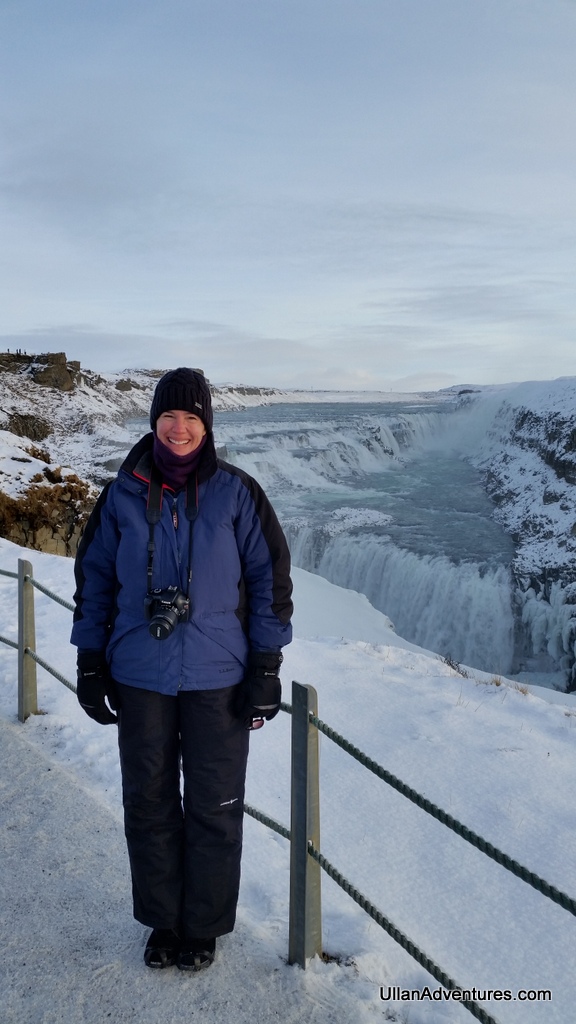 Then it was time to head to Geysir for lunch and to see the geysers there.  The English word geyser comes from the Great Geysir here.  The Great Geysir no longer erupts, but the Strokkur geyser erupts every 4-7 minutes.

I was so hungry that I grabbed a quick lunch of delicious meatballs, before heading out to see the geyser. 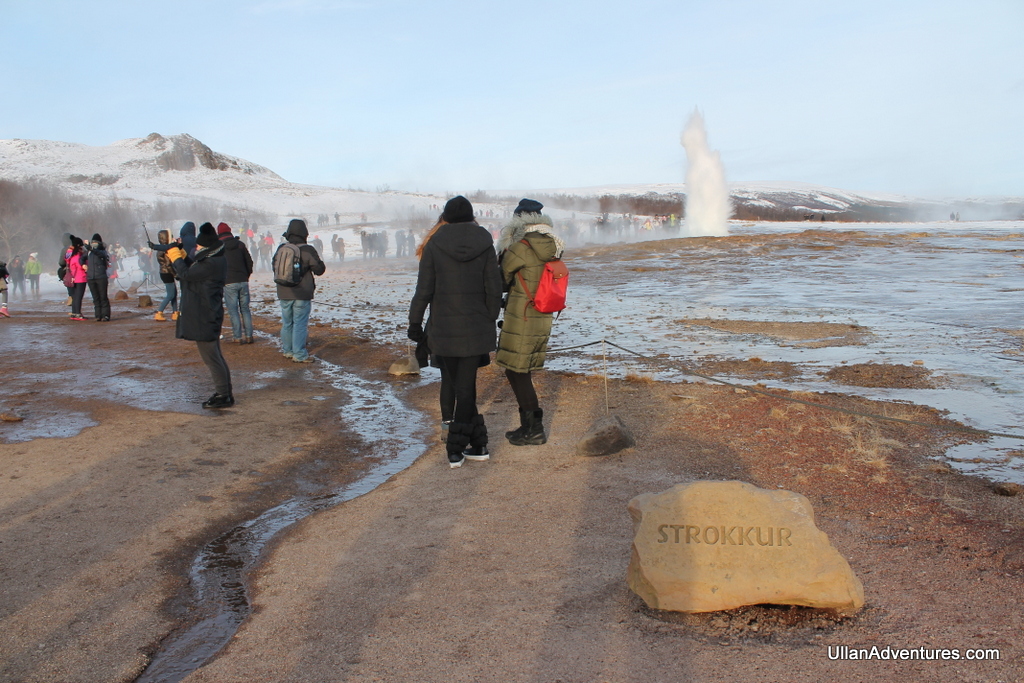 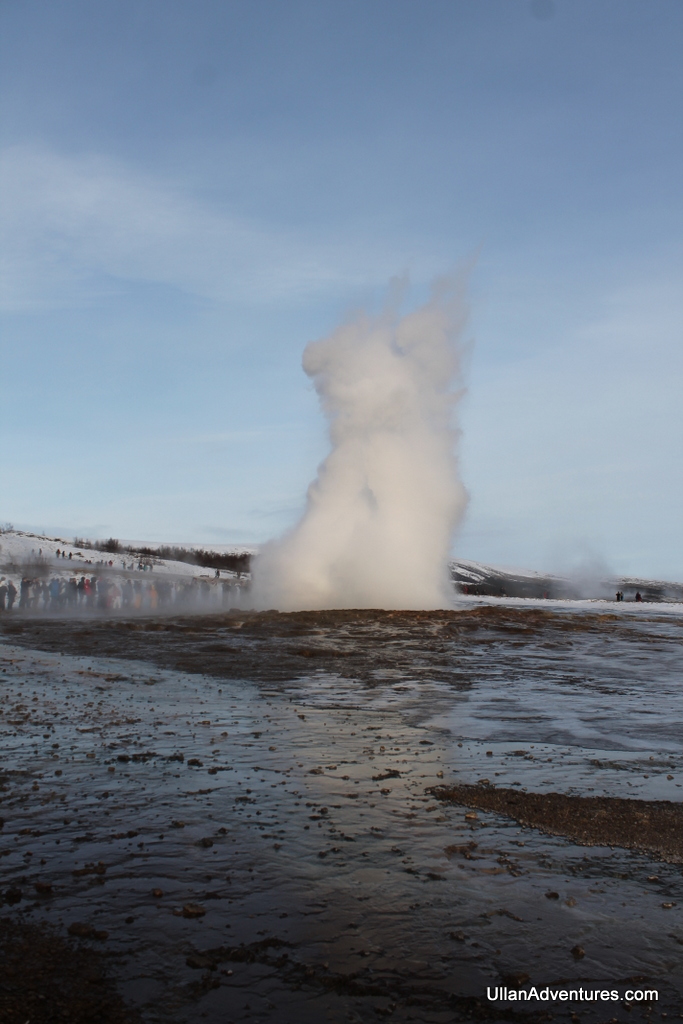 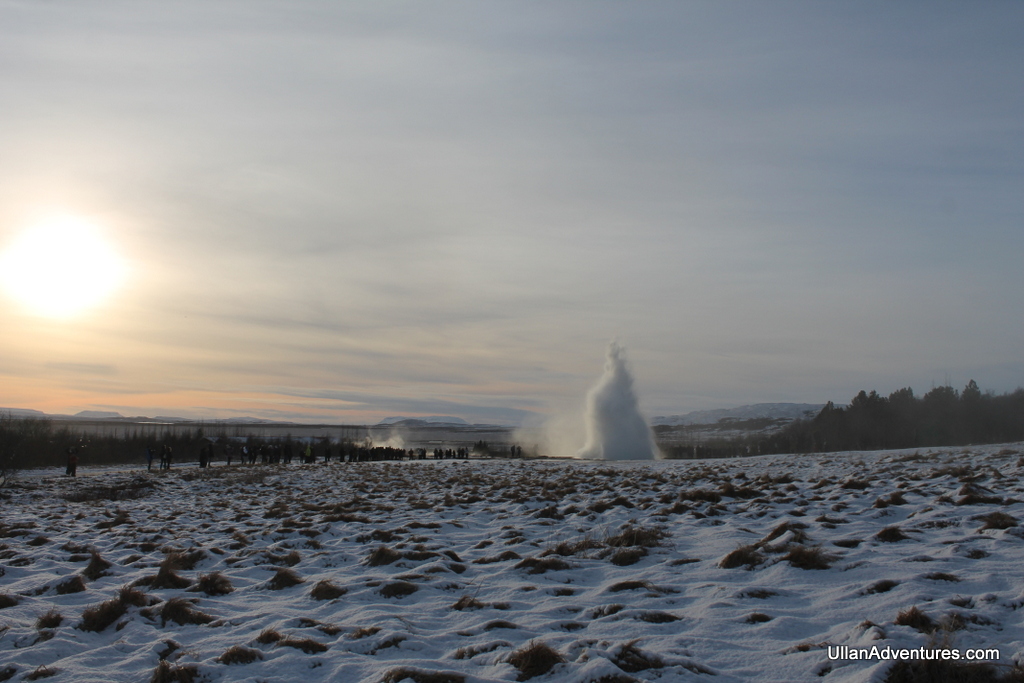 There are also boiling mud pits steaming all along the landscape. 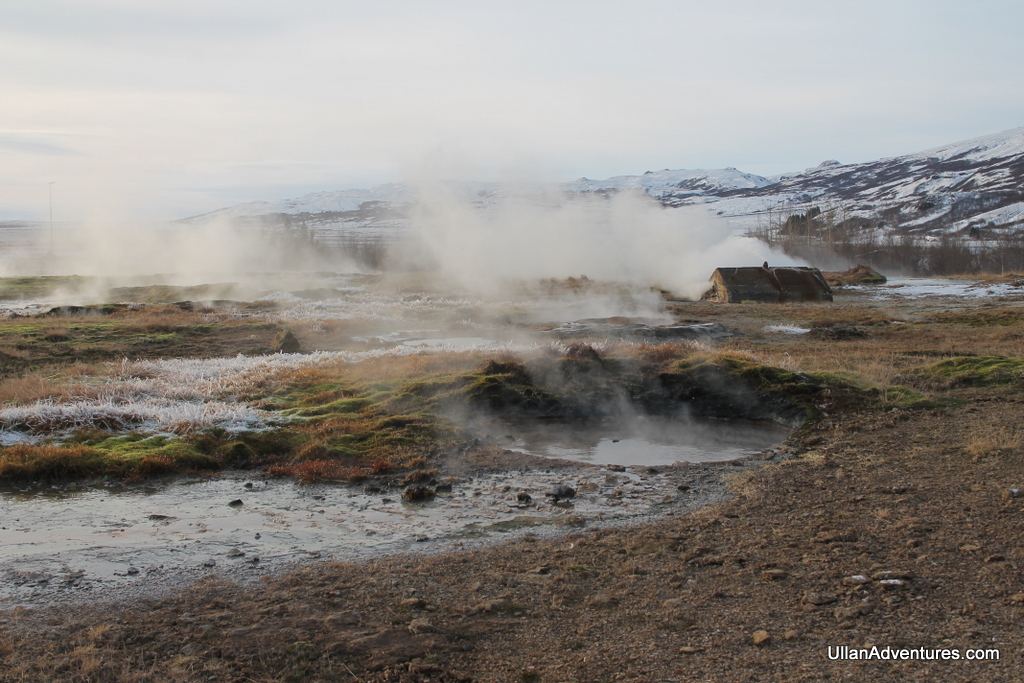 Once back on the minibus, we headed to Thingvellir (Þingvellir) National Park which is an UNESCO World Heritage Site.  This was the site I was most looking forward to seeing.  The site is a rift valley between the North American and Eurasian tectonic plates where you literally get to walk between continents.  The plates here are drifting apart at about 2cm a year and the rift valley is 7km wide between the 2 plates.

We arrived on the Eurasian plate, then headed onto the rift valley.  We were left off at the bottom on the opposite side so we could hike up to the North American plate.  First though, I hiked up to a cool waterfall, Öxarárfoss . We were told that the water comes from a glacier and it takes about 70 years for the water to flow to the waterfall and down to the lake making it some of the clearest, cleanest water you can get.  Our guide told us to fill up our water bottles from the waterfall so we could enjoy the water. 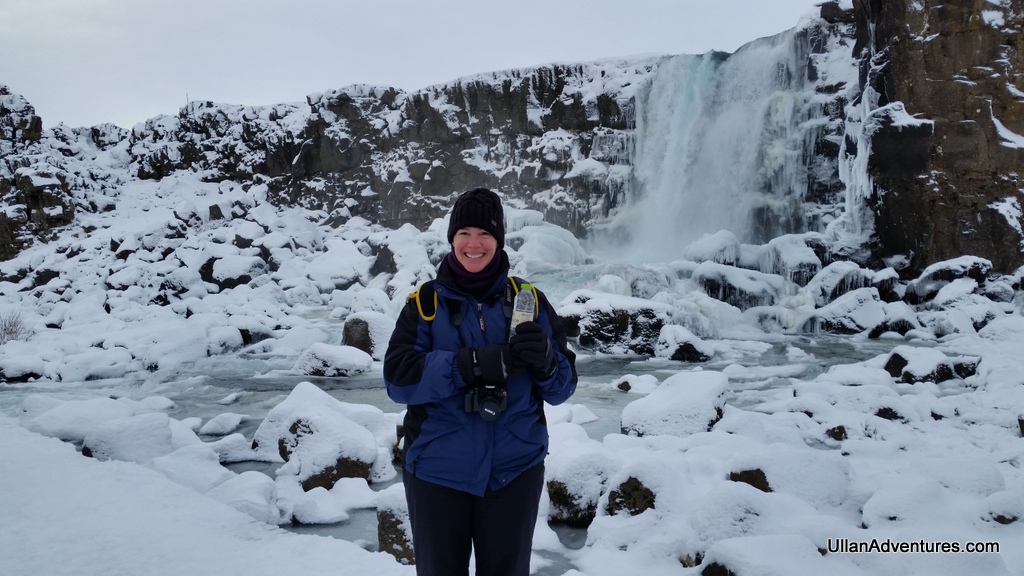 Water from the Öxarárfoss waterfall 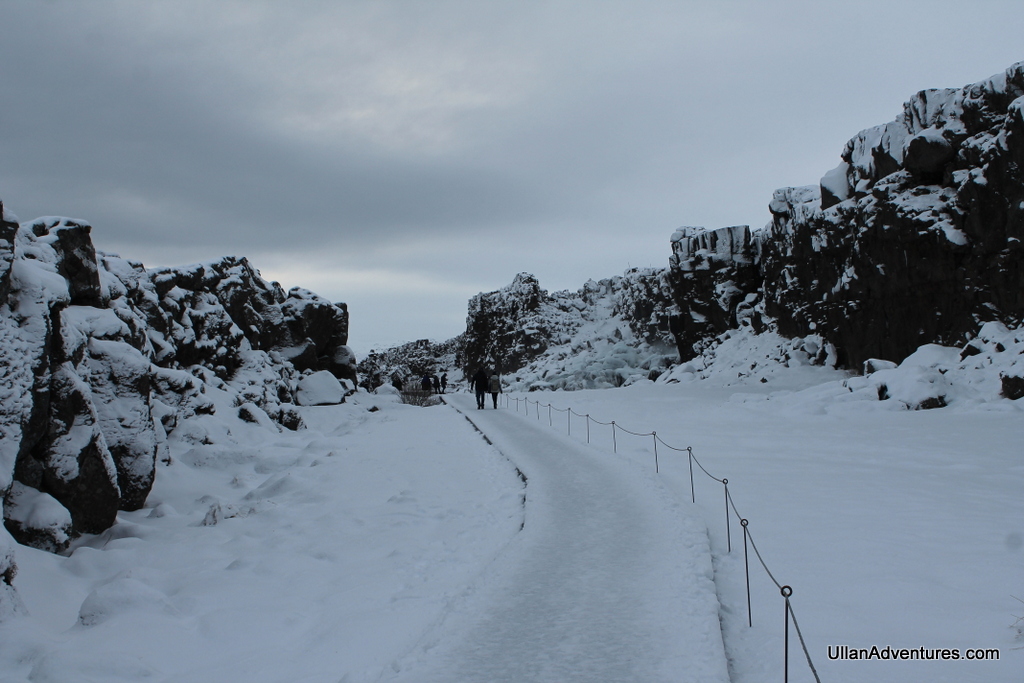 Hiking up to Öxarárfoss waterfall 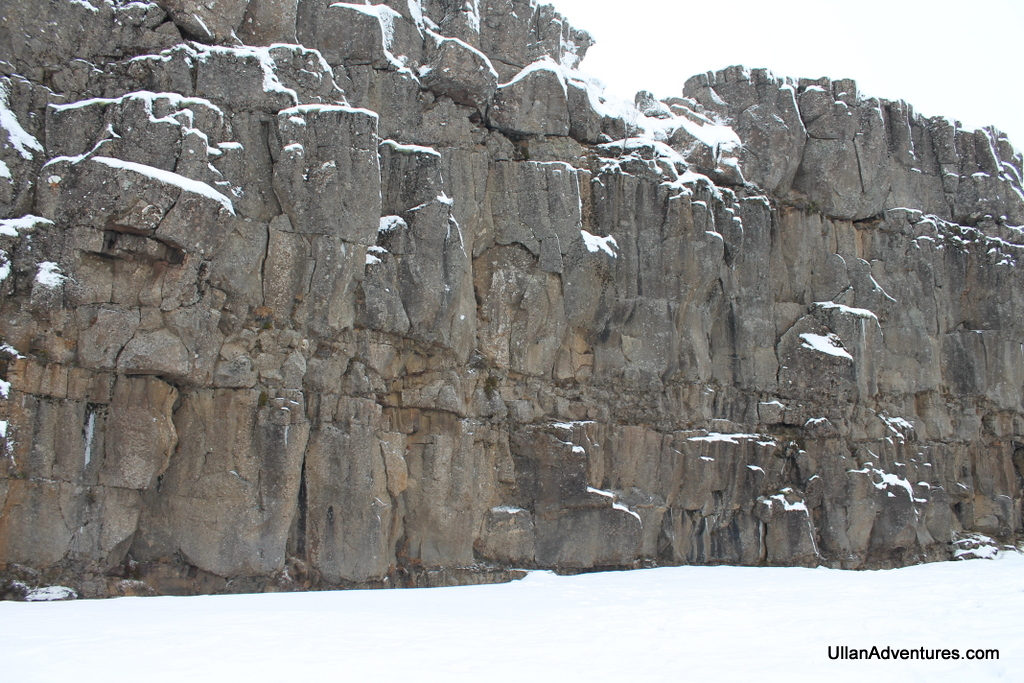 The edge of the North American tectonic plate

I then walked up the path to the North American plate.  I was so glad to have the crampons again as it would’ve been quite slippery without them.  Along the way we passed The Alþing (Althing) which is the original national parliament of Iceland.  It was started in 930 making it the oldest parliamentary institution in the world (it has since been moved to Reykjavik). 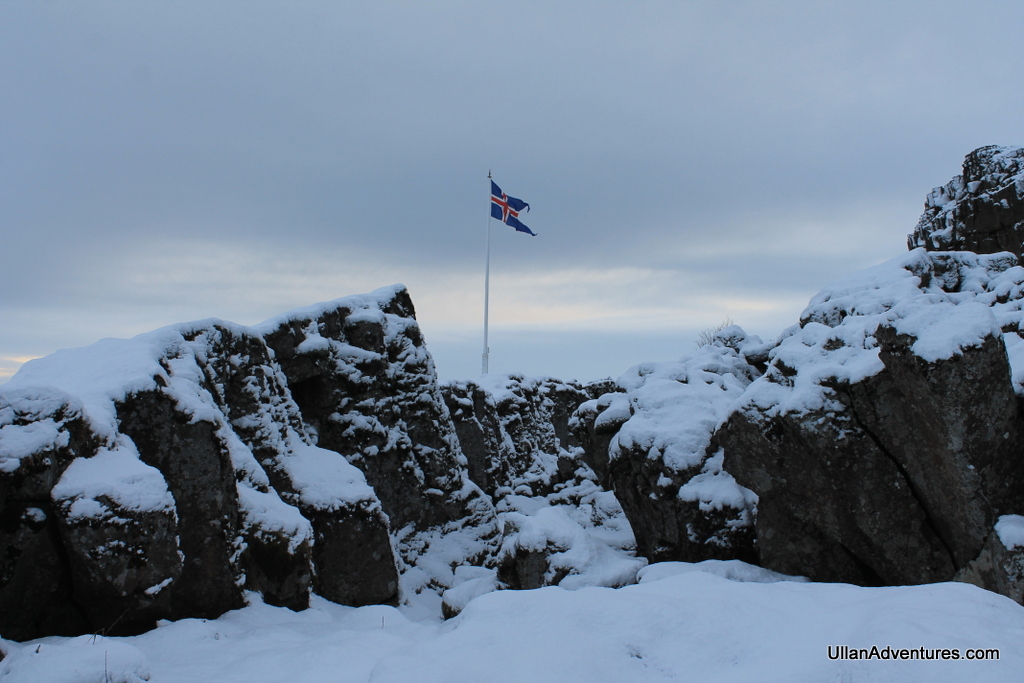 Once at the top, we had a fantastic view of the rift valley.  You could even see the dark edge of the start of the Eurasian plate across the continental drift. 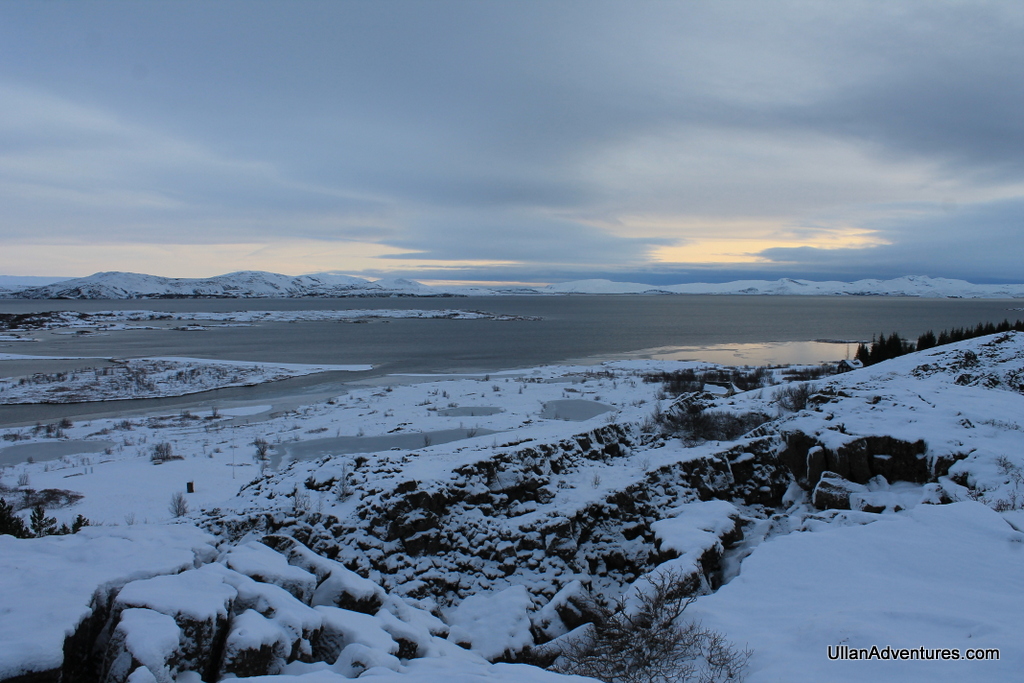 Rift valley between the North American and Eurasian tectonic plates 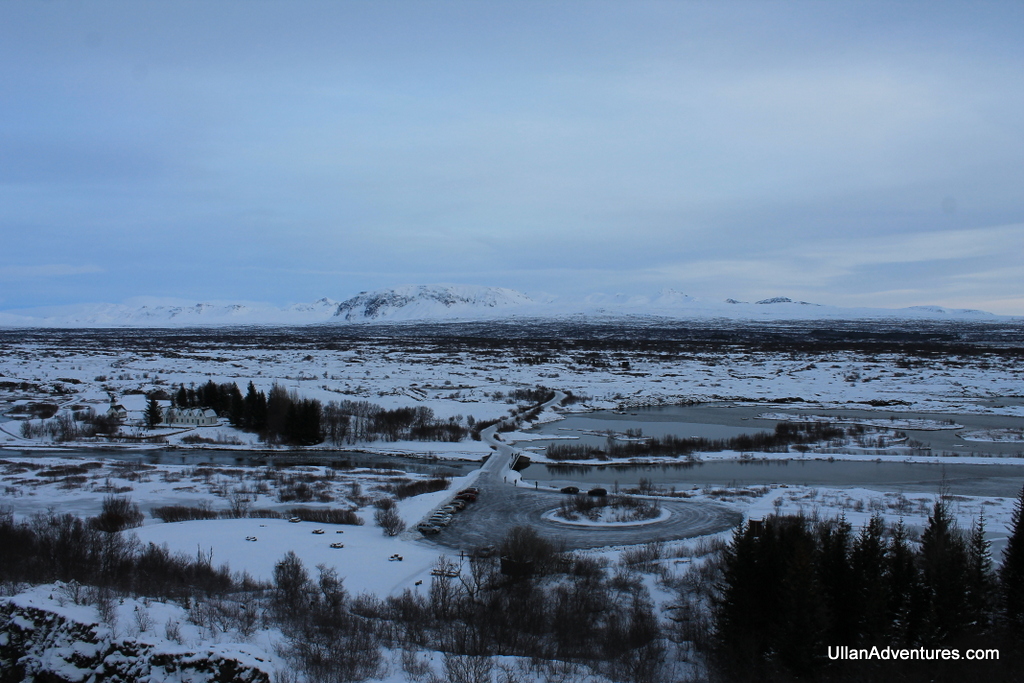 Rift valley between the North American and Eurasian tectonic plates

It was now about 4pm and time to head back to Reykjavik, a trip that took about an hour.

Along the way, we made a quick stop off to see some Icelandic horses up close.  They came right over to us and were so beautiful and fuzzy and sweet.  I wanted to take one home with me! 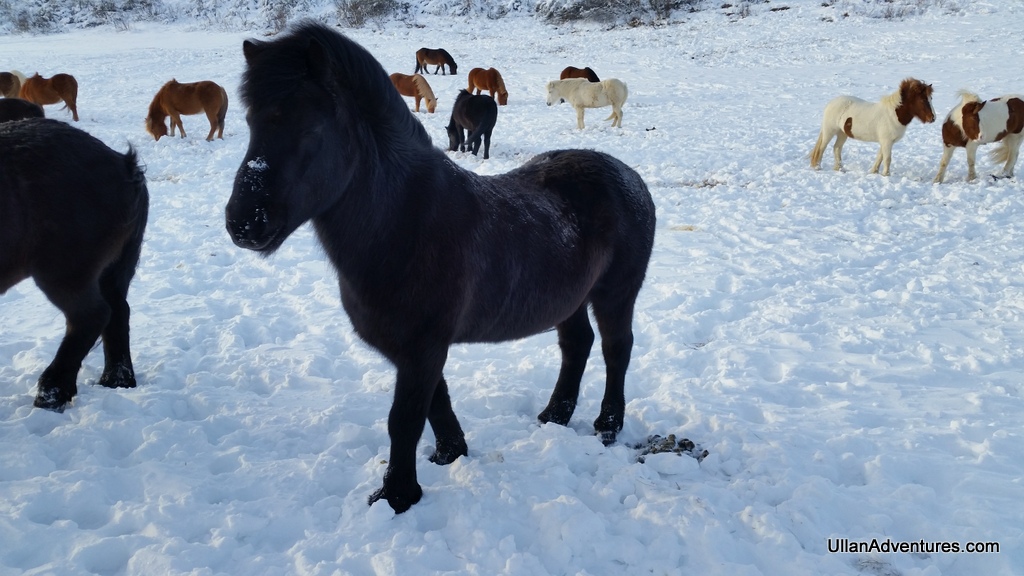 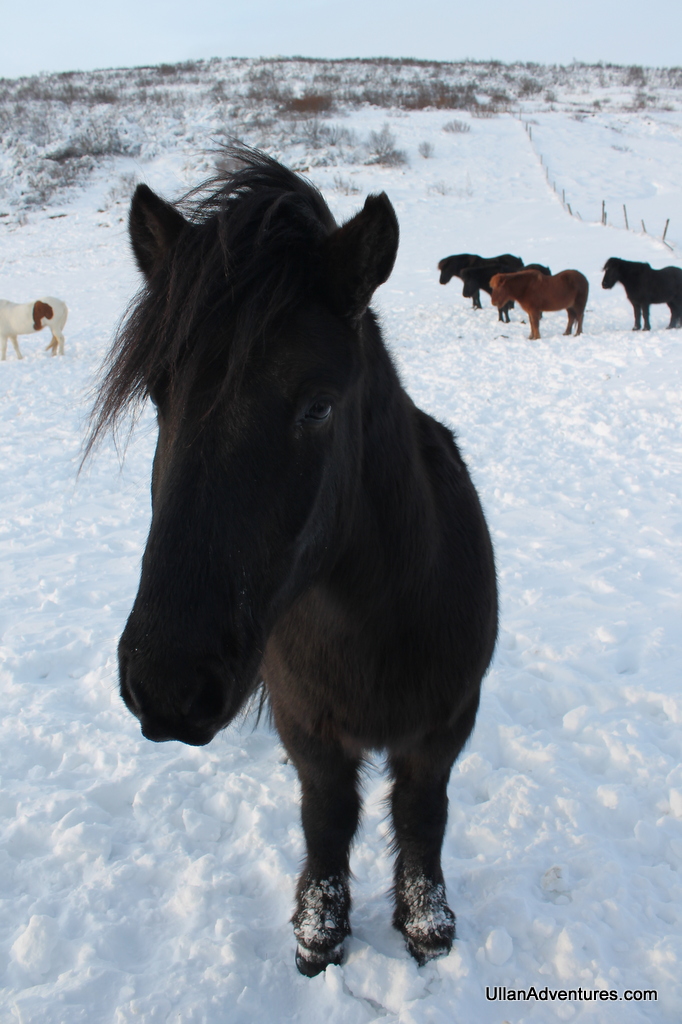 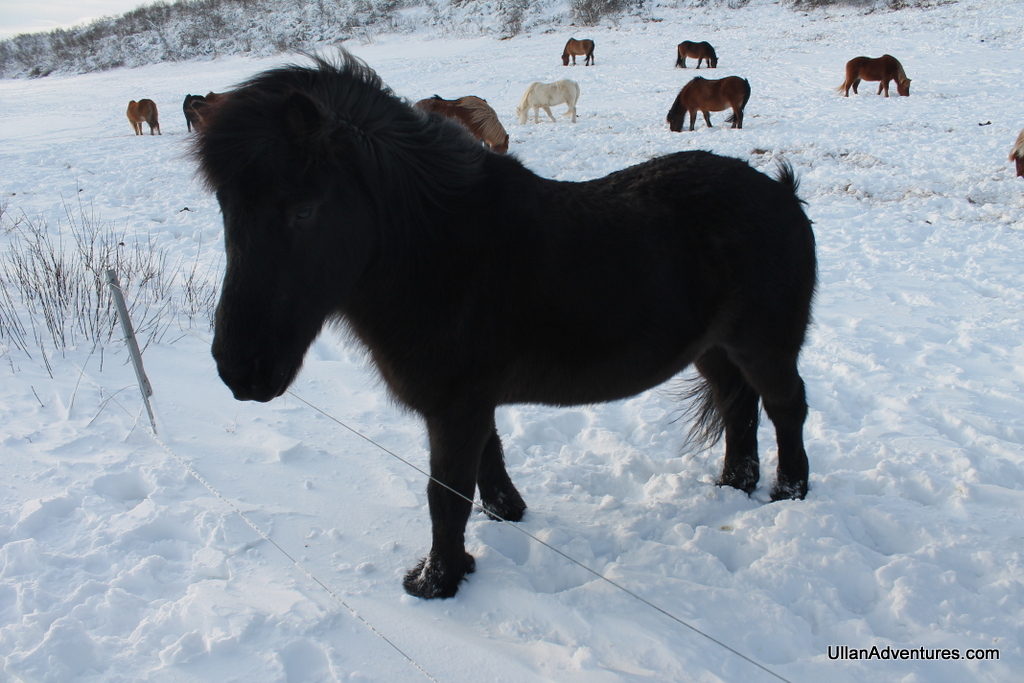 I’m so glad I went on this tour.  Not only did I get to see some of the Iceland landscape, but I got to see some beautiful sites too.  It was great to get out in nature and breathe in the clean air and see the pristine snow covered land. 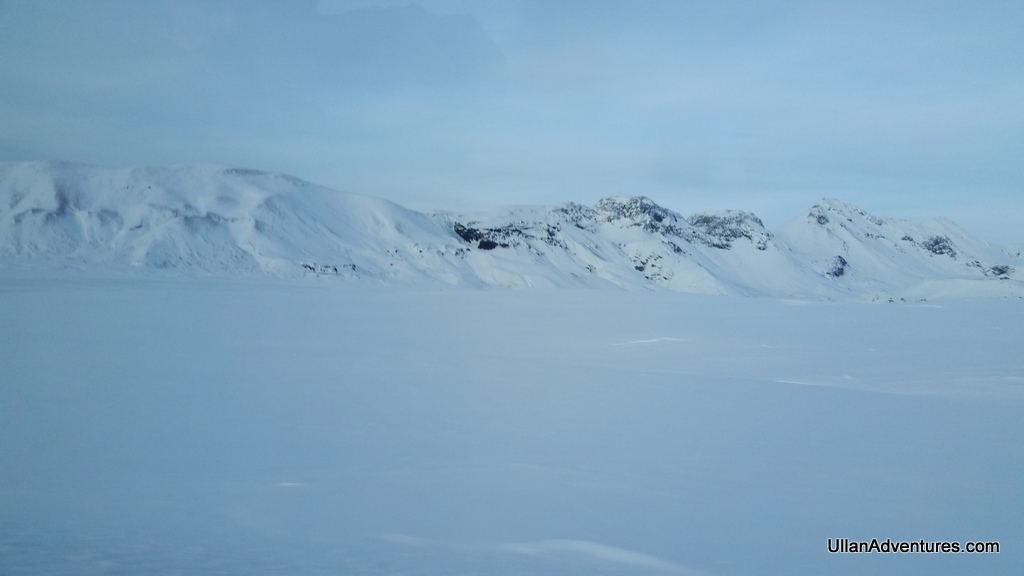 I took my tour with GeoIceland and they did a great job.  Our guide, Siggi, was excellent and added enough information to enrich the day.  Our tour was only maybe 12-15 people which made it more personal and gave us more flexibility at the sites.