View of Reykjavik from the top of the Hallgrímskirkja Church

I traveled to Reykjavik after 2 great days in Copenhagen on the free stopover deal on WOW Air.  I arrived at my hotel, the CenterHotel Plaza, around 4pm quite hungry as I missed lunch again while traveling.  After dropping my things, I walked about 5 minutes to the harbor to the Saegreifinn (Sea Baron) restaurant for their world famous lobster soup.  I had just watched a Bizarre Foods with Andrew Zimmern where they showed how it was made, so I had been looking forward to it.  Unfortunately, I only give it a “meh”.  It was good, but not great.  I was still glad to try it though and enjoyed the experience as well. 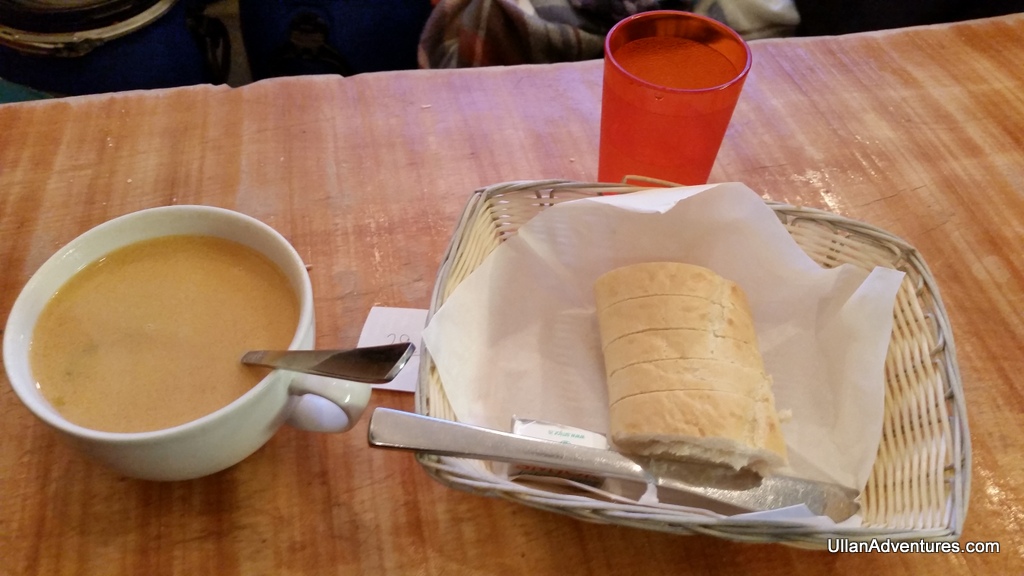 Then it was time to head out on my Northern Lights tour!  I returned after midnight and had to immediately get to sleep as I had early morning the next day going on my Golden Circle tour.

I returned from the tour around 5:30pm and quickly headed out for a meal of Plokkfiskur which is a fish, potato, and cheese gratin. 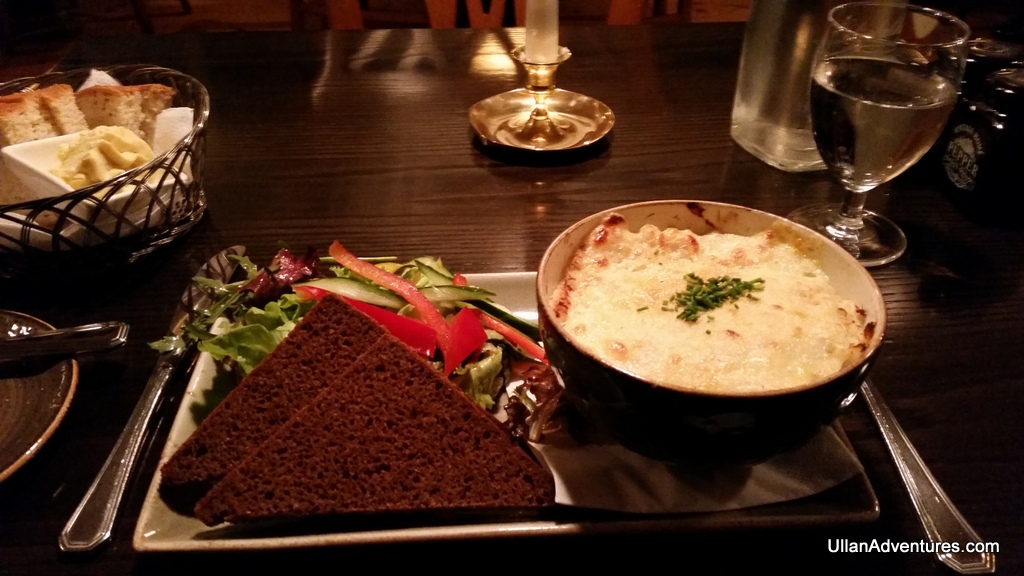 Then it was time to explore downtown Reykjavik so I walked one of the main streets up to Hallgrímskirkja Church then walked back on Laugavegur, the main shopping street. 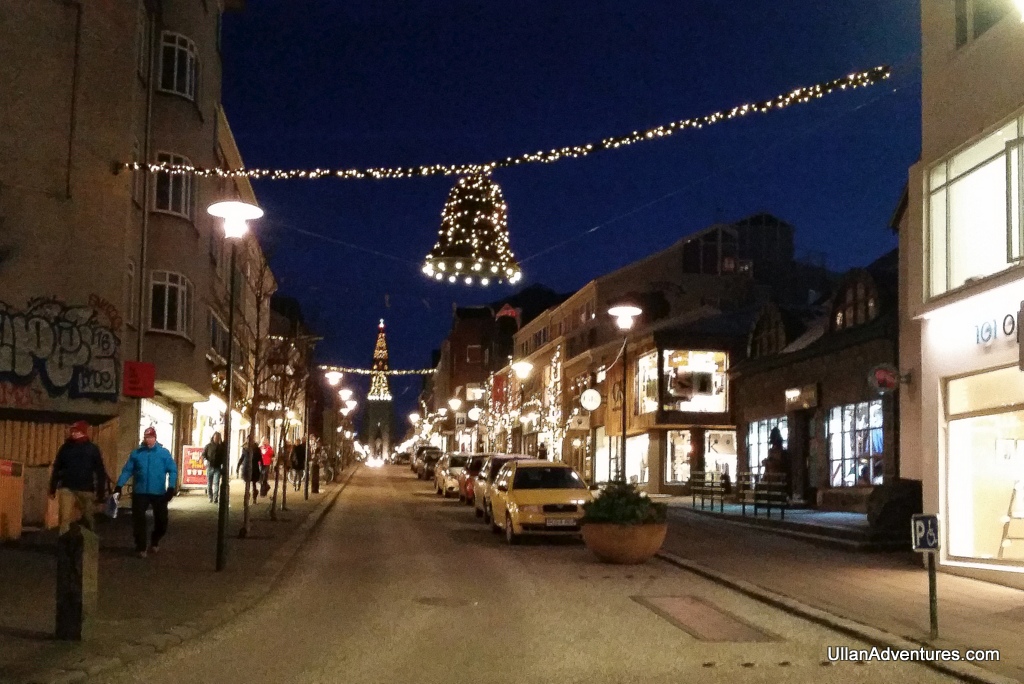 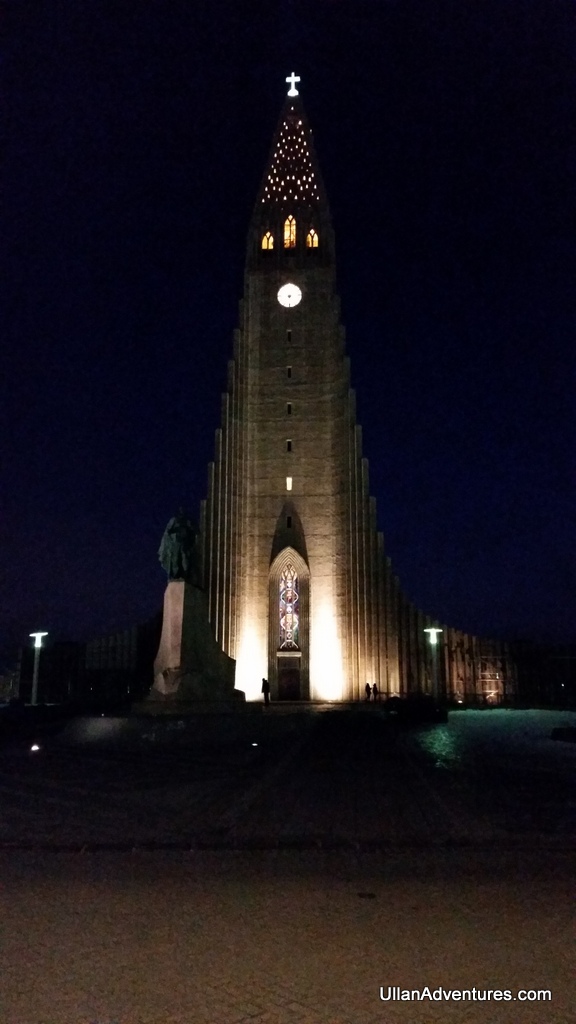 That night I didn’t have any plans so I went to a bar across the street from my hotel, Micro Bar, and had a local, Icelandic beer – very good – before getting some sleep.

The next morning I finally got to sleep in and have a casual breakfast at the hotel as my next excursion didn’t leave till noon.  Unfortunately there was a bit of a snafu with getting picked up for my Blue Lagoon excursion.  I stupidly waited inside (but looking out) as I had done for my 2 other tours because it was freezing rain outside.  But these guys didn’t stop at my hotel and stopped down the street at a bus stop.  When I checked in with the front desk, they told me about waiting at the bus stop and I was told to take the taxi to the bus terminal for the main bus to the Blue Lagoon.  Luckily there was a taxi out front who raced me there in time, but then my credit cards wouldn’t work for some strange reason.  He actually let me go without paying as I didn’t have any cash either, so I was able to make my bus in time.  I almost cried when he told me to go – what a nice person!  Phew!

The bus trip takes about 50 minutes to the Blue Lagoon and it’s great to see the topography along the way.

The Blue Lagoon is awesome!  It’s definitely an experience.  You have to shower naked before getting dressed and going down, but they do have private showers and they give you a towel so it wasn’t a big deal.  They also have an indoor pool that goes outside so you don’t have to walk outside in the freezing cold to get in.

The water is so warm, it’s like crawling into a fantastically huge bath.

First stop was making my way to the face mask bar and slathering myself with the silica mud.  It was awesome seeing everyone walking around with their faces covered in white goop!  Of course I was the only person without their phone taking selfies, so I don’t have any pictures to share.  Once you’ve let the mask set, you rinse off, then do the algae mask, which is a green/gray goop this time!

While that was working on my wrinkles, I swam all around the place then up to the swim up bar.  My ticket included a drink so I opted for a glass of Prosecco which I enjoyed while sitting on a bench in the lagoon. 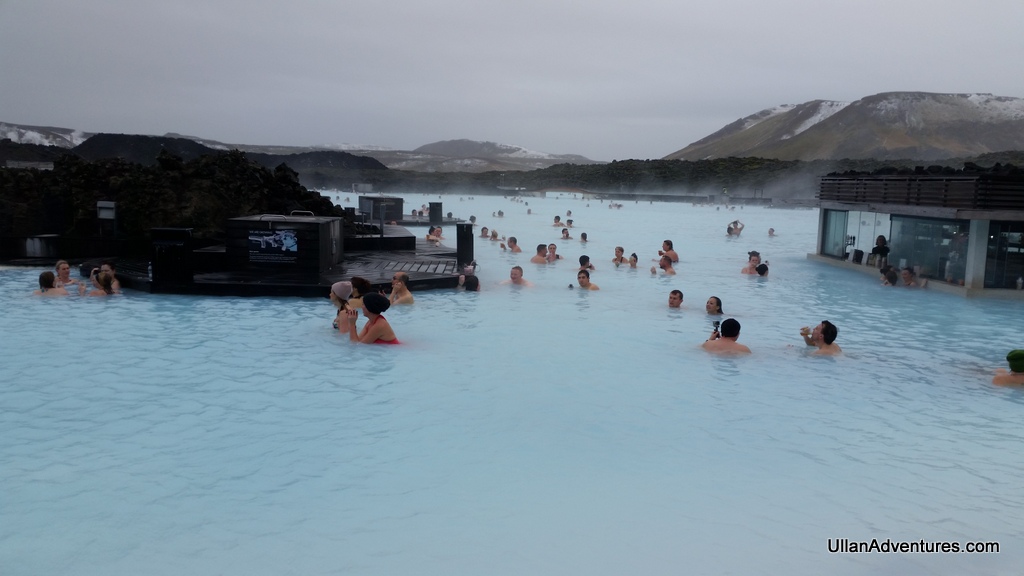 At this point, it was freezing rain on us and the wind was brutal on our faces so it was starting to get a bit unpleasant.  I also was feeling really off that day since I’d been sick the entire trip, so I decided to leave the lagoon after only 45 minutes or so.  Once dry and warm, I was able to get a snack before taking the bus back to my hotel.

Then it was time for an insanely late lunch of grilled scallops back at the Saegreifinn, before wandering around the downtown some more.  Later I went out for a steak sandwich to The Laundromat Cafe, which is exactly as it sounds, a laundromat with an attached cafe.  Even though I didn’t do laundry, the food was delicious so it was worth going.

The next morning it was raining out, but there was still one thing left I wanted to do – go up to the top of the Hallgrímskirkja Church.  Even though it was about 10:30am and the sun had just risen, it was still so dark and gray because of the rain.  It was still really cool to see Reykjavik in all directions! 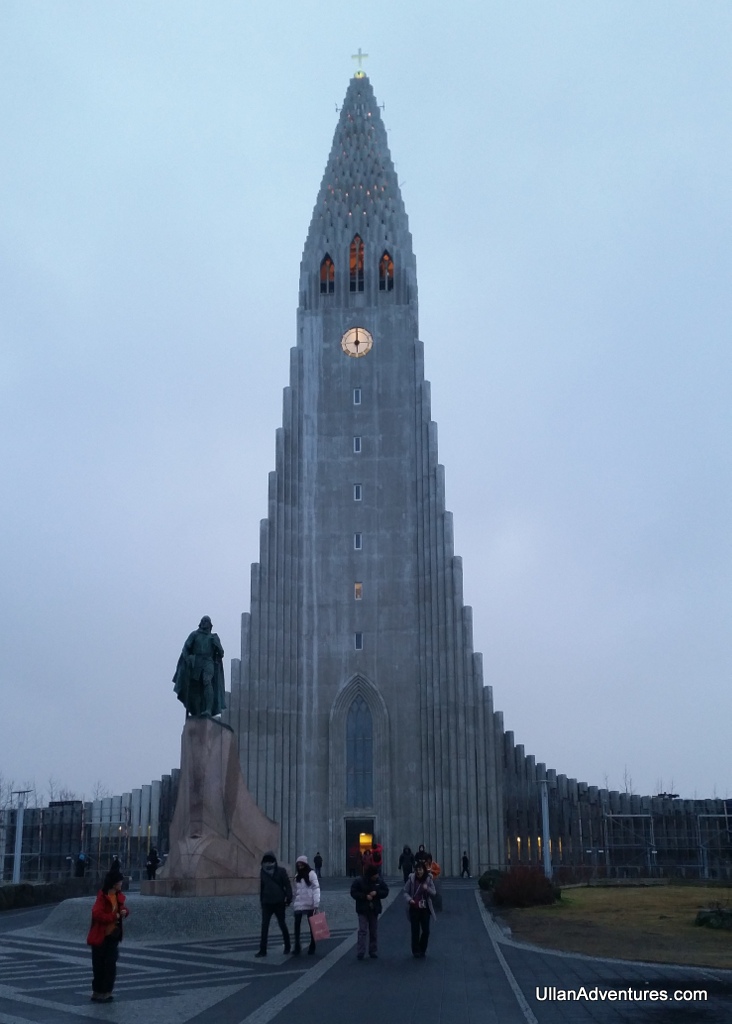 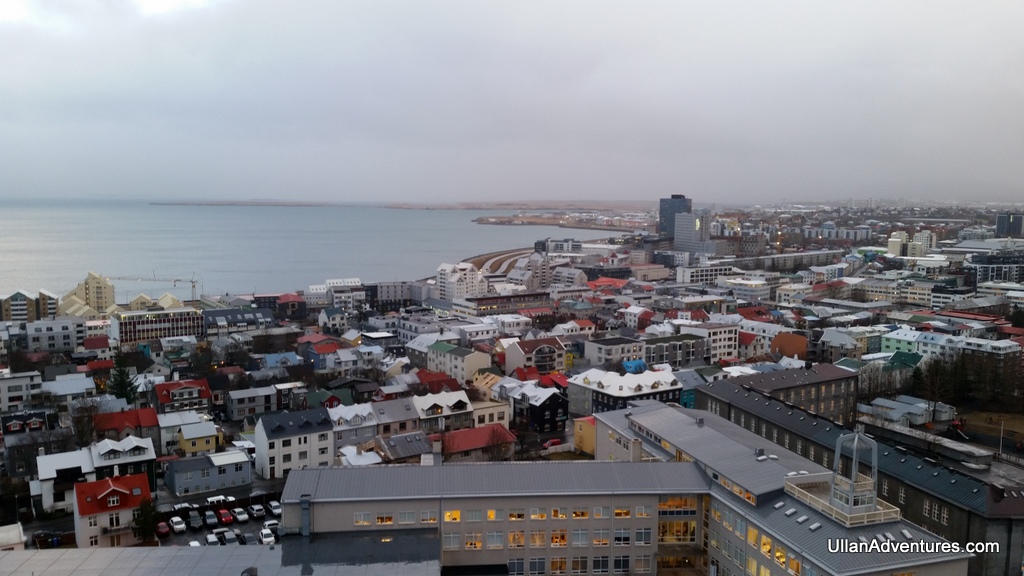 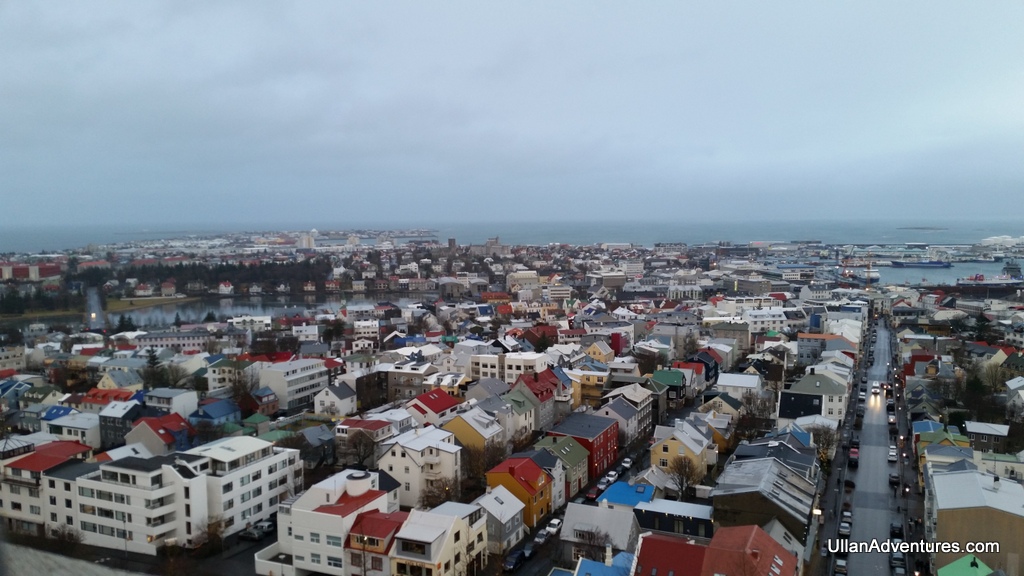 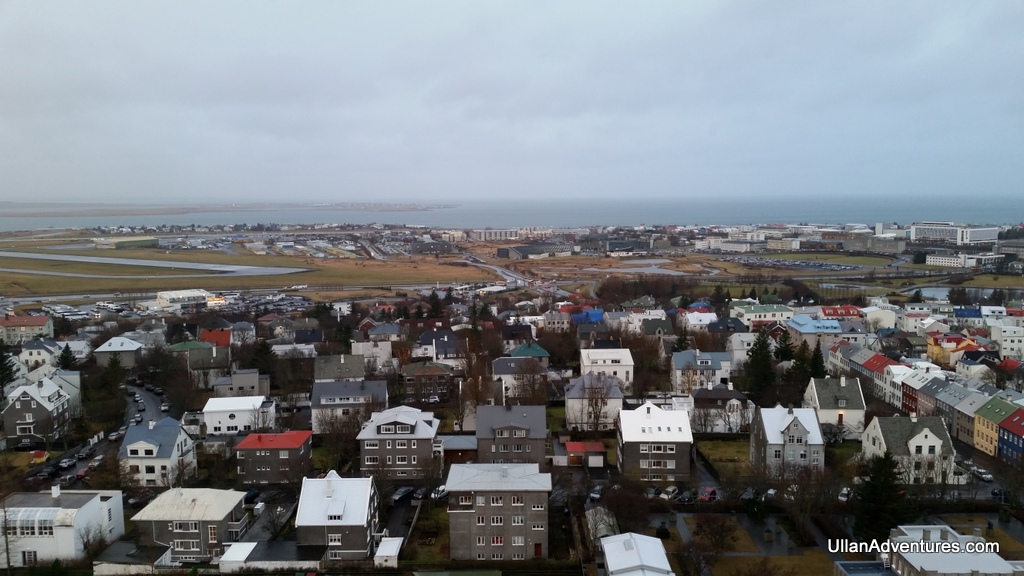 The inside of the church is really cool too with this amazing pipe organ.  An organist came in and was playing the organ so I sat and listened to him for a while before heading back. 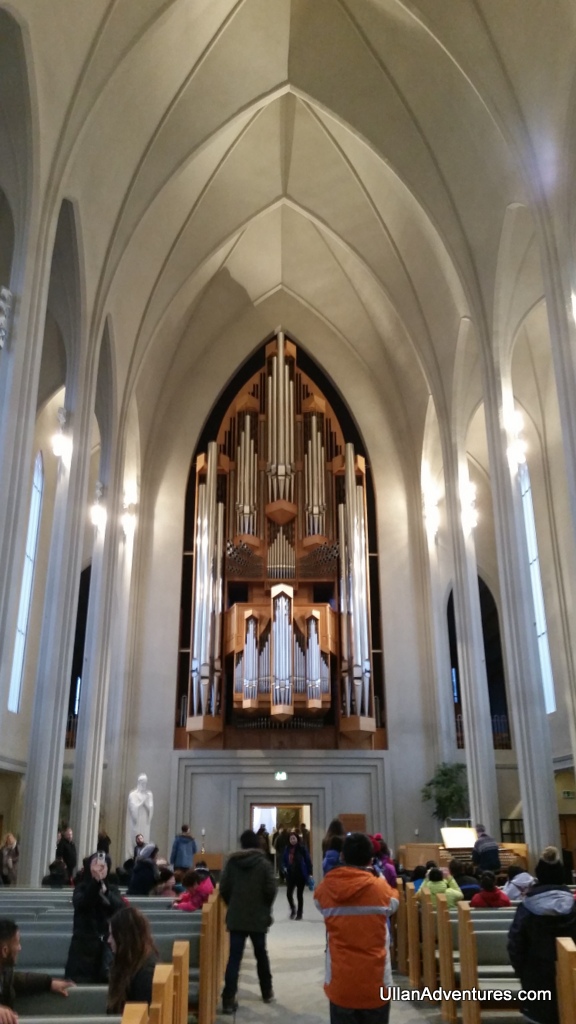 Inside of Hallgrímskirkja Church

Then it was time to pack up and head to the airport for my flight back to the US.  I was sad to leave Iceland, but also looking forward to returning home as I’d missed Chuck and the kids so much.

All in all, I really enjoyed my time in Iceland.  When I arrived, the land near the airport reminded me of the Big Island except covered in snow.  Parts of it looked as expected and parts of it didn’t.  It was also pretty chilly, but not nearly as bad as I worried, I guess because I was dressed for it.  It was also wonderful to get out in nature and see pristine land, breathe the clean air, and drink the pure water.  I definitely loved my time there and was glad I finally made it to this Bucket List destination.

Iceland from the air 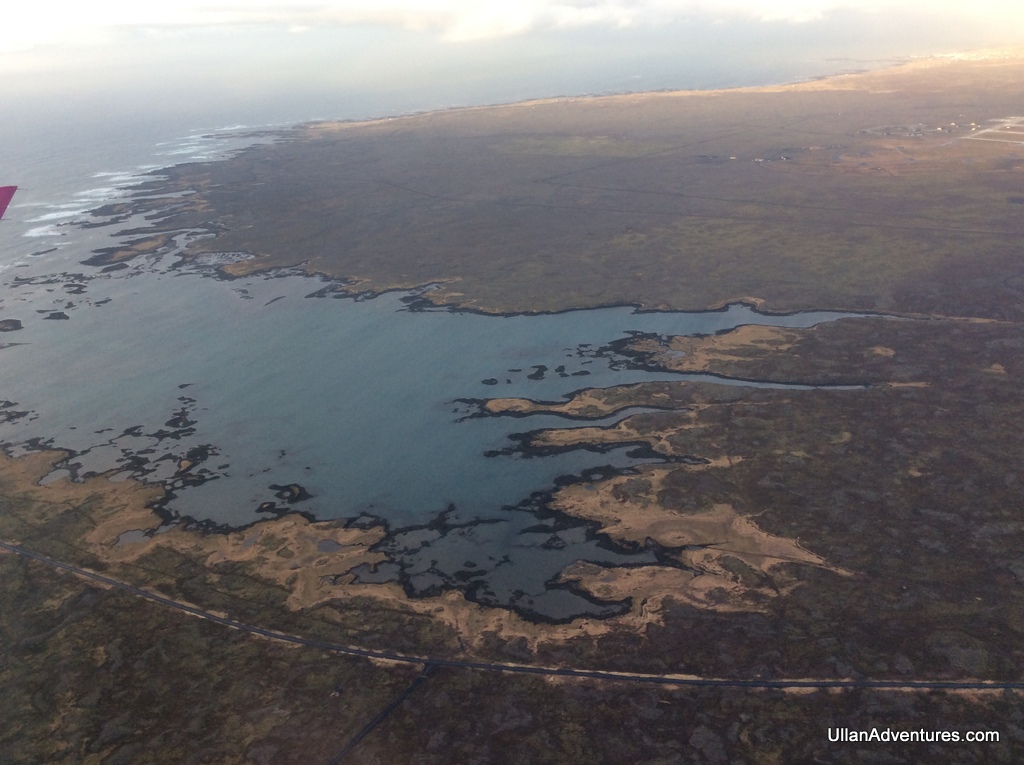 Some land on my flight back to the US 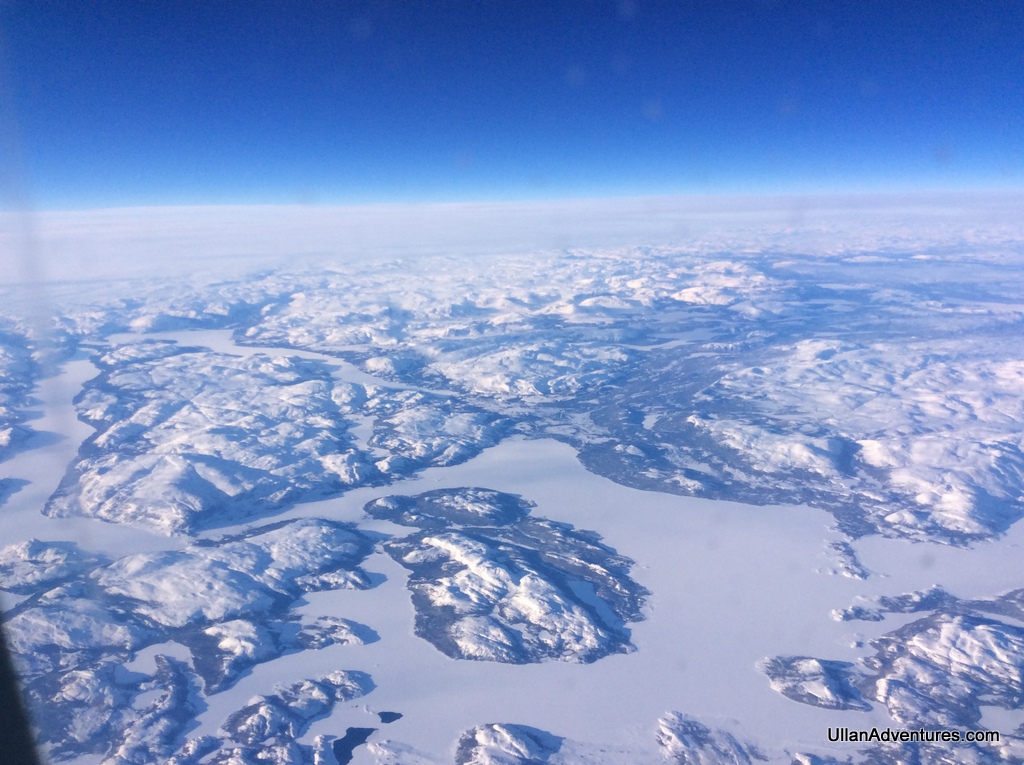