Once again, we all woke in the middle of the night and were wide awake.  Ah, jet lag!  We had a nice, leisurely morning in the rental and then took a taxi to Shinjuku.  We asked to be let out in the Golden Gai area, but were never quite able to find it.  Also, everything was mostly shut down in the area, so we never did really get to experience the area and didn’t get the chance to come back another time.

After giving up finding the area, we headed to our 12pm reservation at the Ninja Restaurant only to discover that we were mapping to the wrong ninja restaurant.  Unfortunately, the one we wanted was a good 20-30 minute walk away.  To get there, we had to cross some train lines by going thru a mall and despite asking people in the mall for help, we were never able to figure out how to get through the mall to the other side.  Eventually we found a tunnel that got us to the other side and arrived just in time, however, we were all tired, hungry, thirsty, and stressed out when we arrived.

Luckily the Ninja Restaurant experience was awesome and we all had a great time!  You can read more about that here.

After lunch, we headed back to Harajuku so we got to see it open and busy.  The kids got one of the famous crepes, Chuck got the biggest cotton candy I’ve ever seen, plus we had fun perusing the various stores. 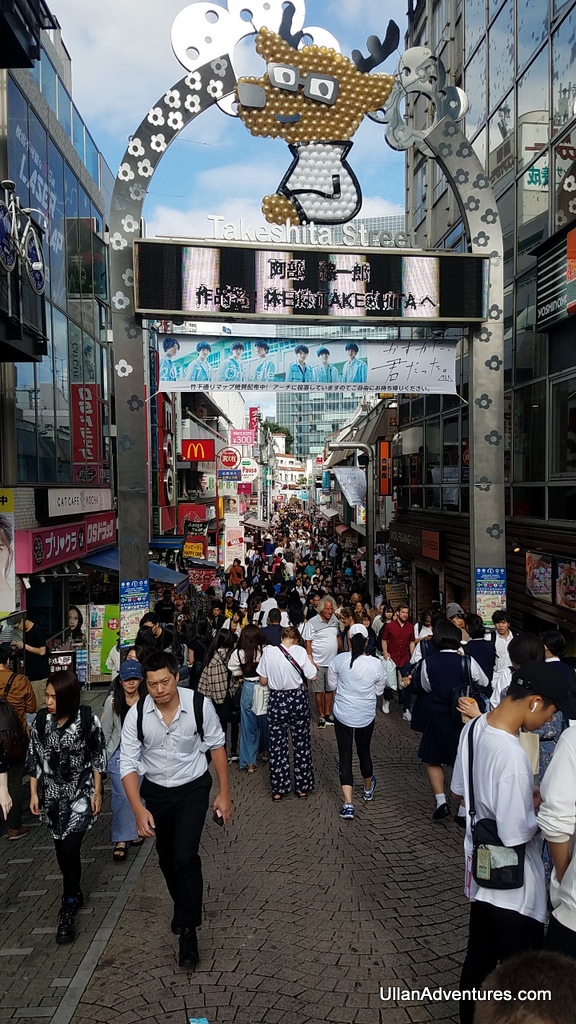 The kids loved their crepes 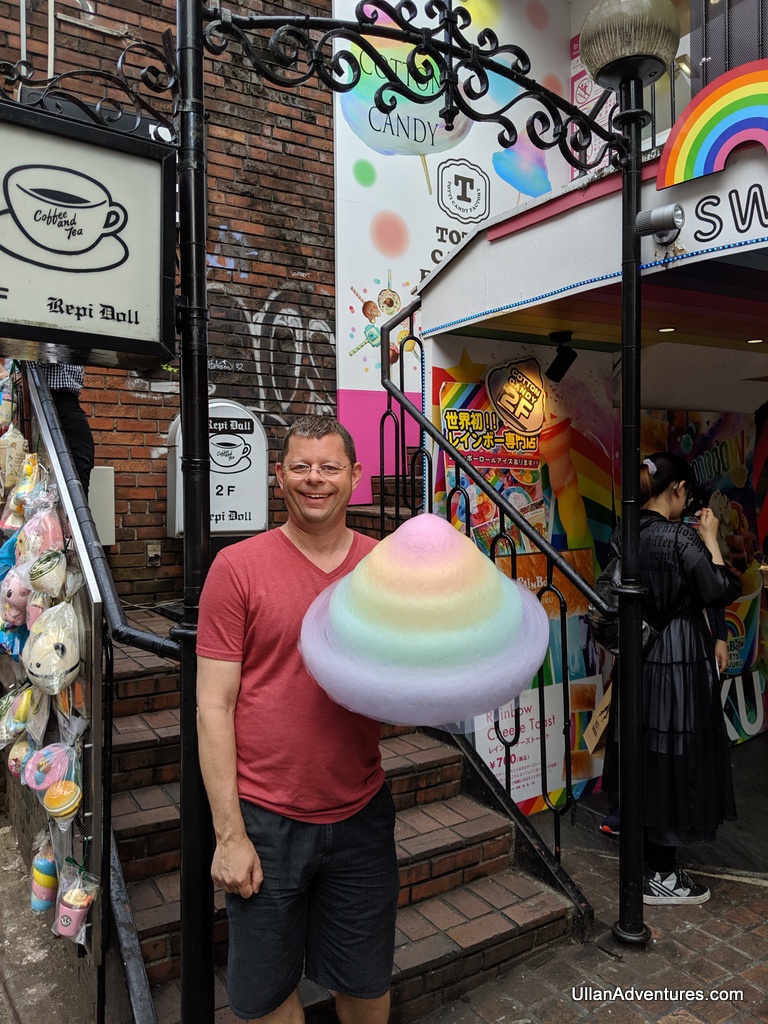 As if that wasn’t enough for one day, we decided to visit the Robot Restaurant that evening.  We had such mixed thoughts on even going, but at the last minute we decided to just go as we might regret not going.  We warned the kids that we had a feeling it might be really bad. It was.

I don’t even know how to describe this thing.  You start by waiting in this area with bad entertainment before walking at least 5 stories downstairs to some long skinny room with really cramped seating.  Once seated, they put these metal gates down so you’re stuck in your seat till the different acts are over.  After each act, they remove the gates and you can get treats, trinkets, or go to the bathroom.  Rinse and repeat for all 4 acts, although between acts 3 & 4, you aren’t allowed to go to the bathroom. 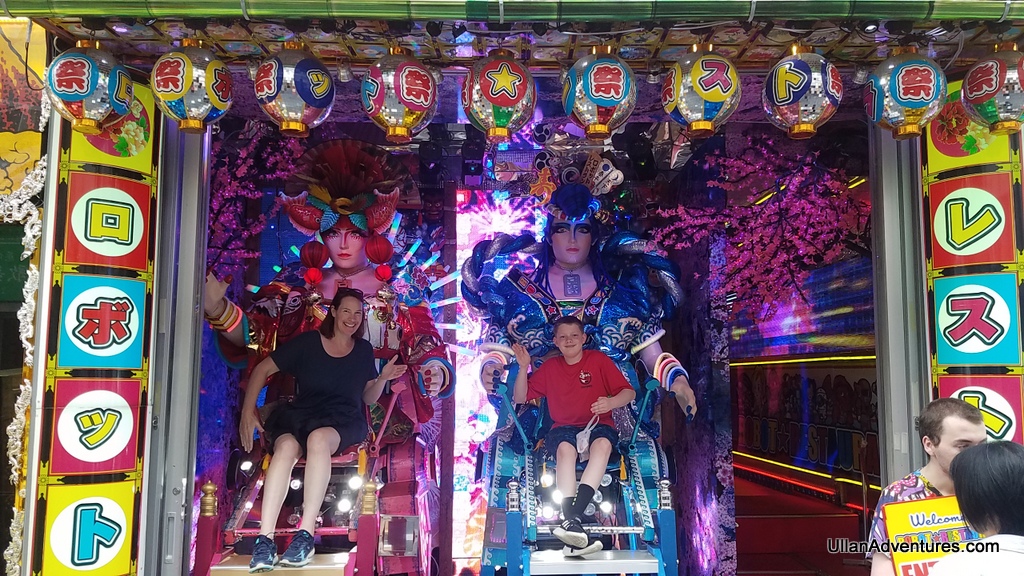 Out front before the show 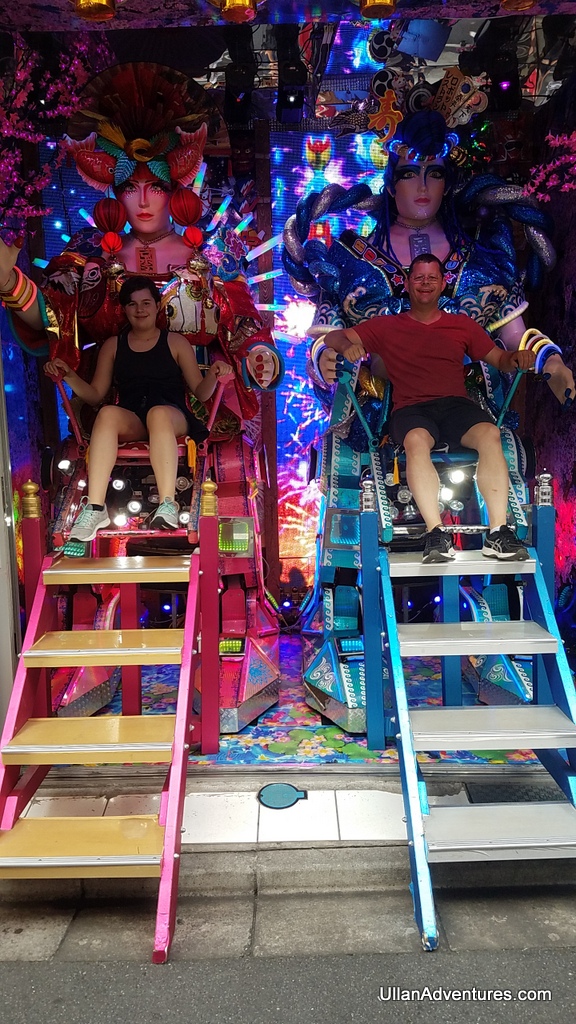 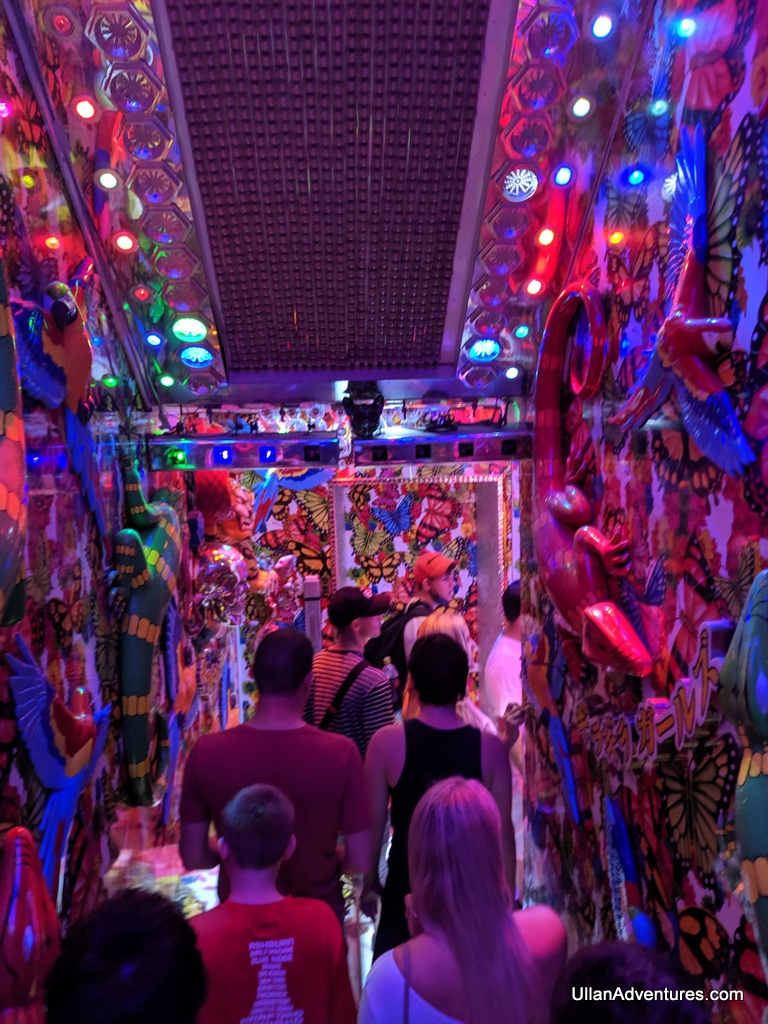 Walk down to the show 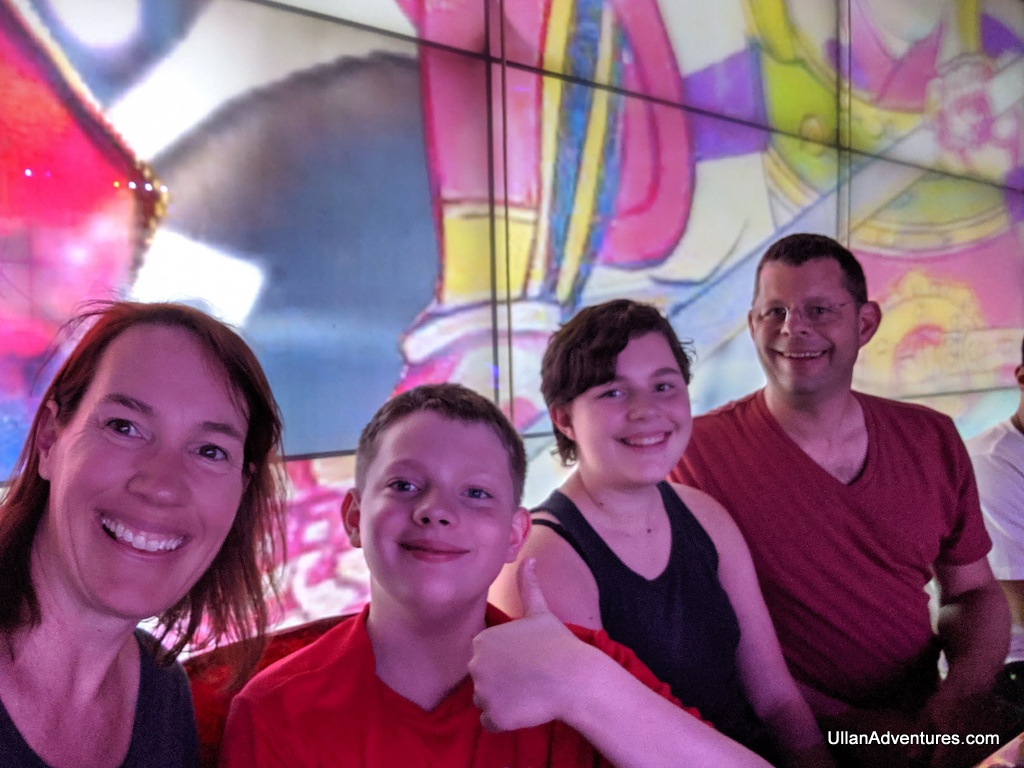 Before the show. We didn’t look quite this happy after it.

The show was just weird.  Weird floats, lasers, robots, dancing, Kung Fu Panda, Teenage Mutant Ninja Turtles, giant serpents, scantily clad women, and more.  It was so bad, but at first I could at least appreciate the spectacle of it.  But then it just kept getting worse and worse. 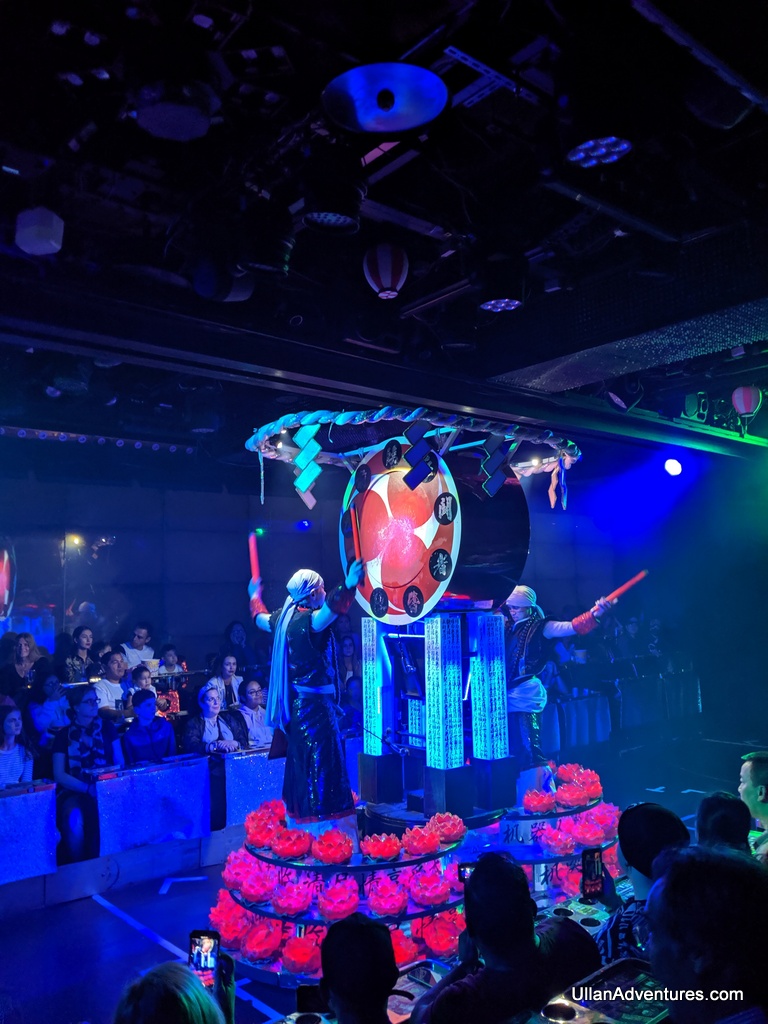 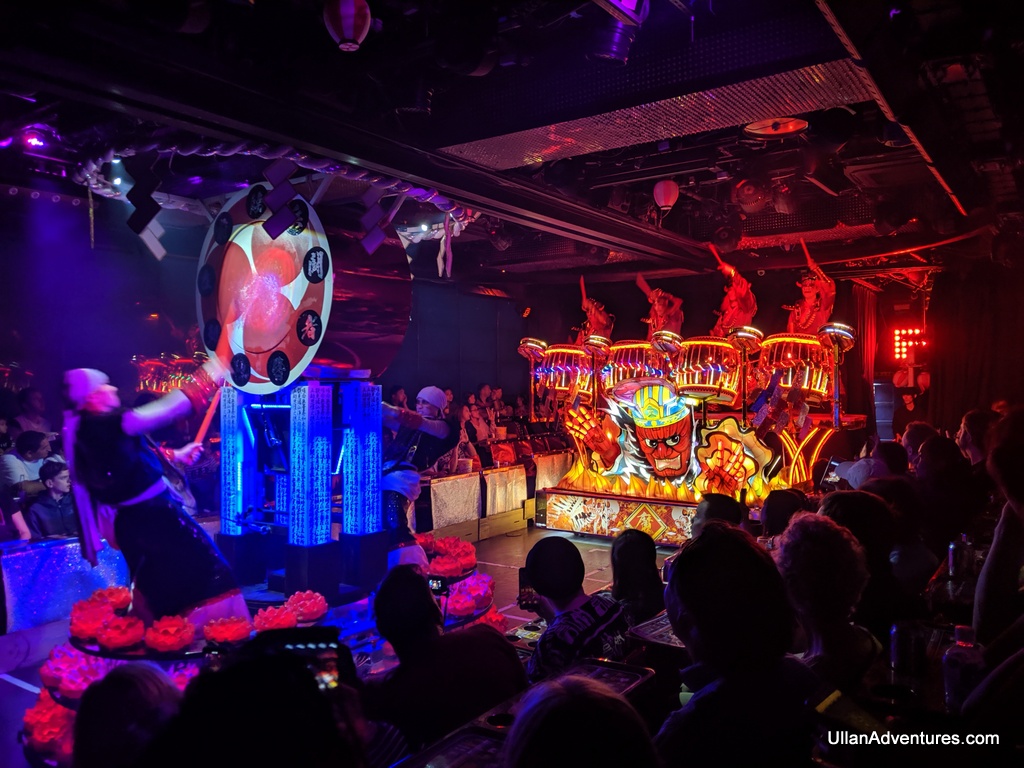 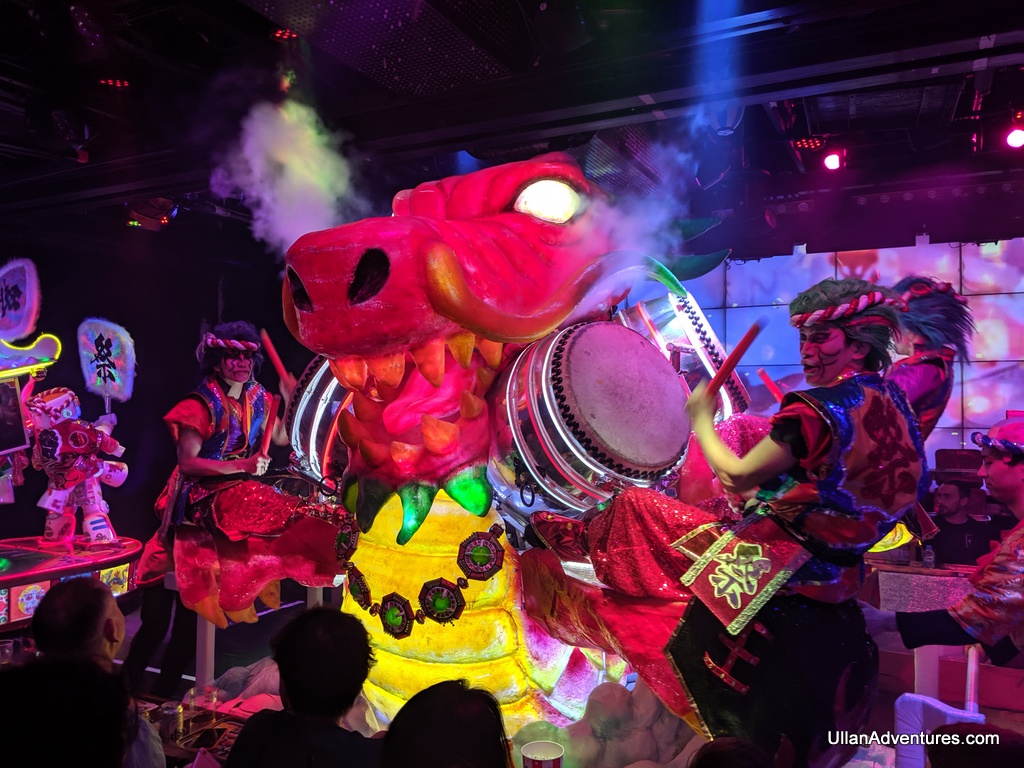 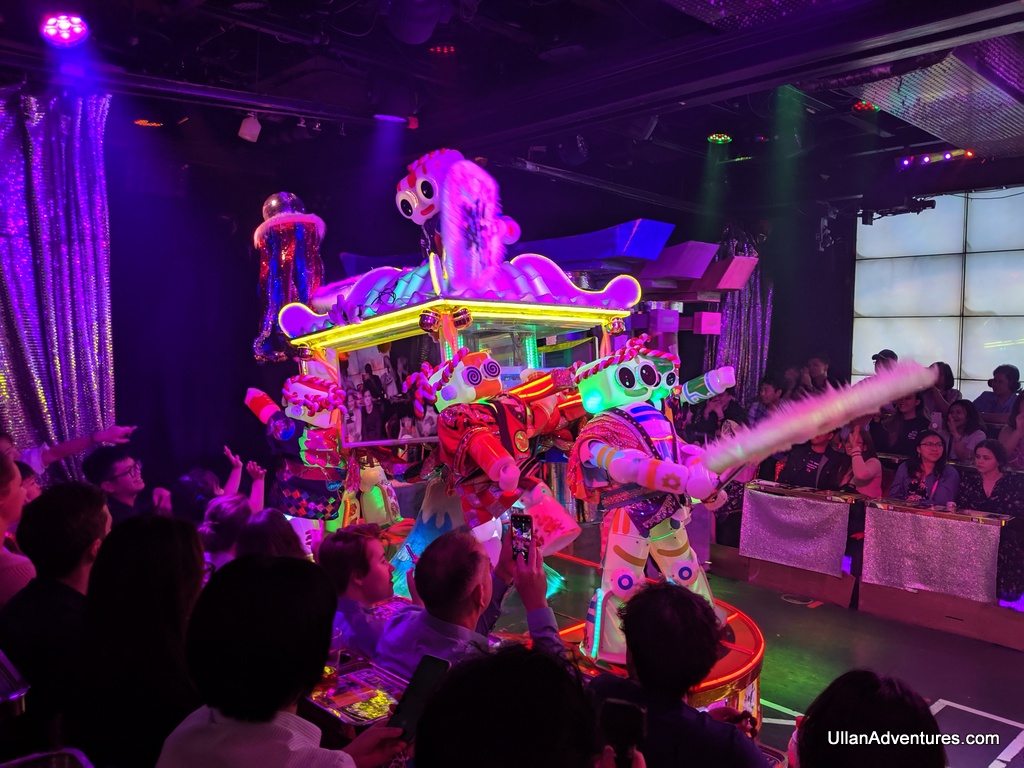 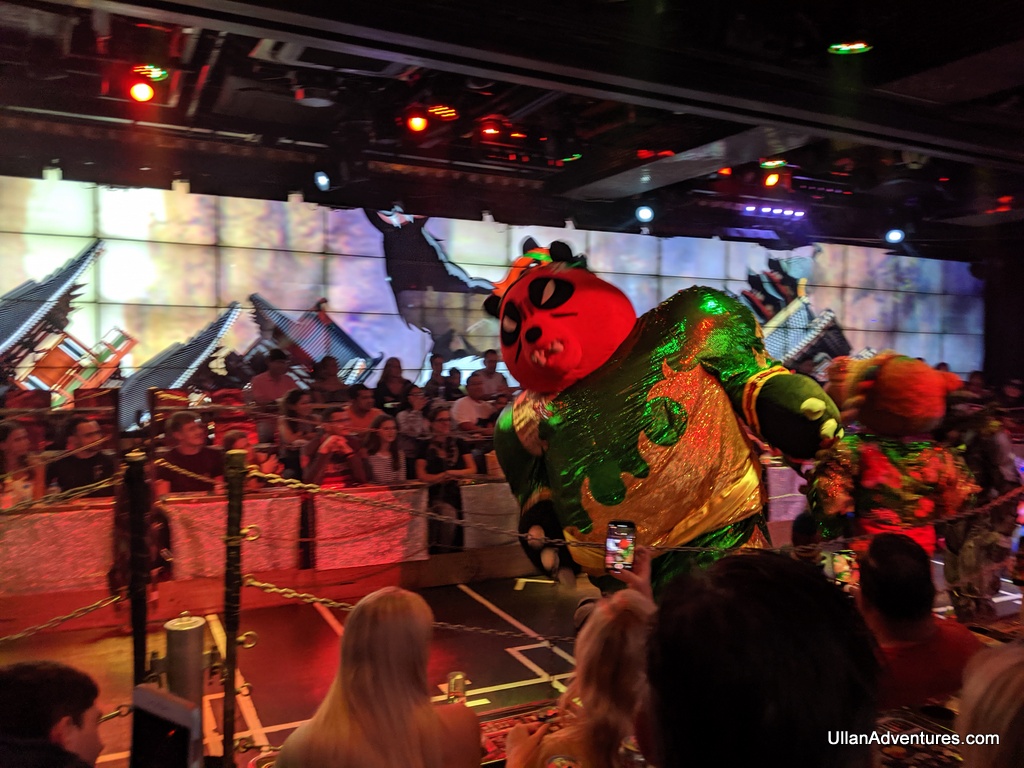 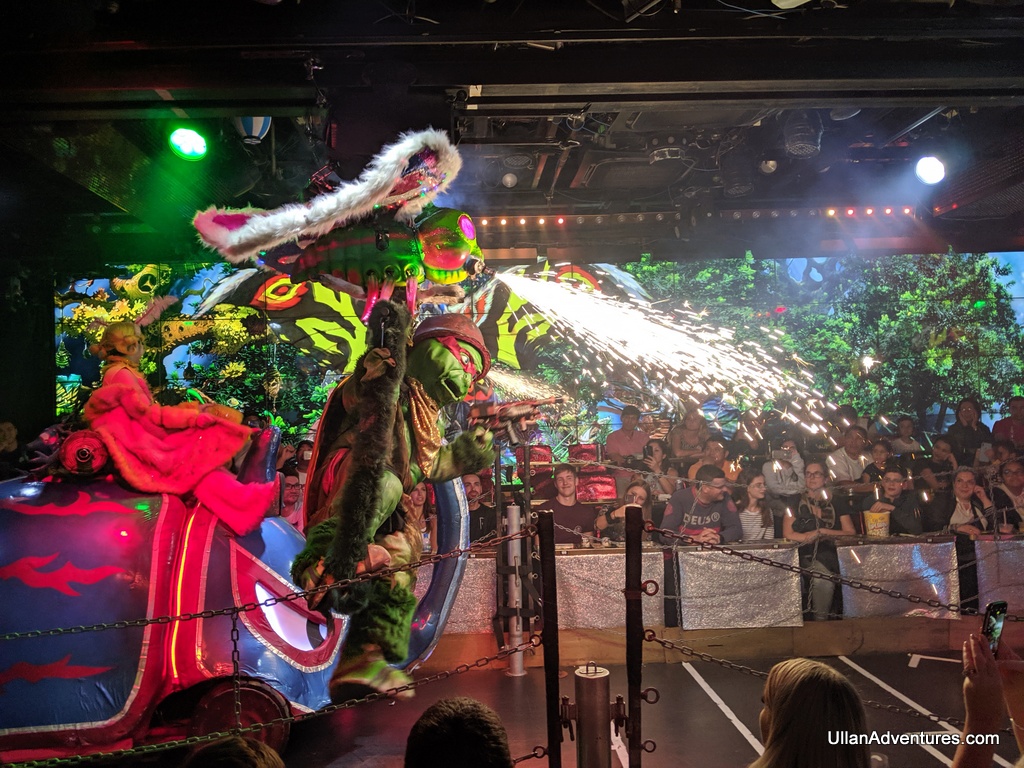 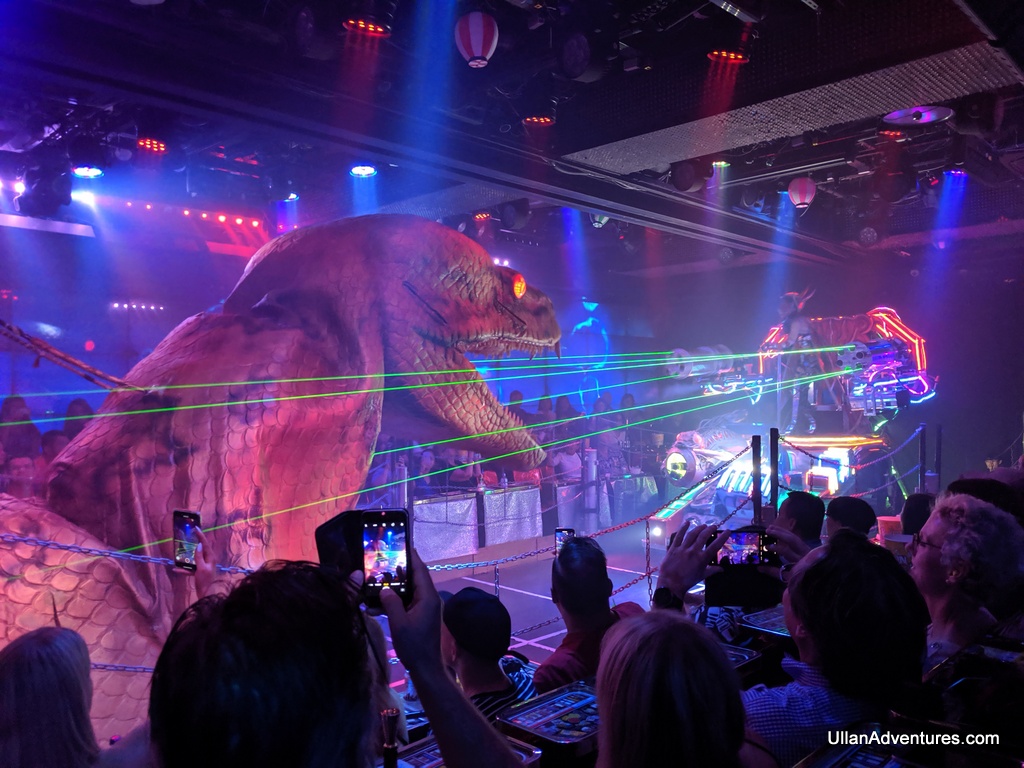 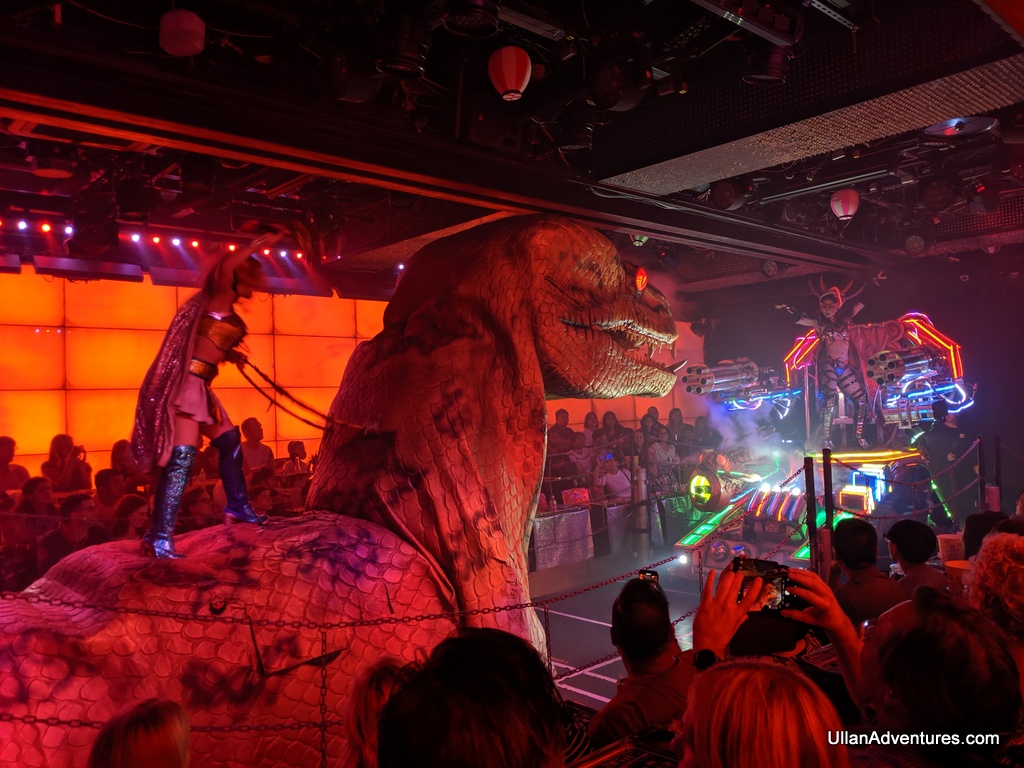 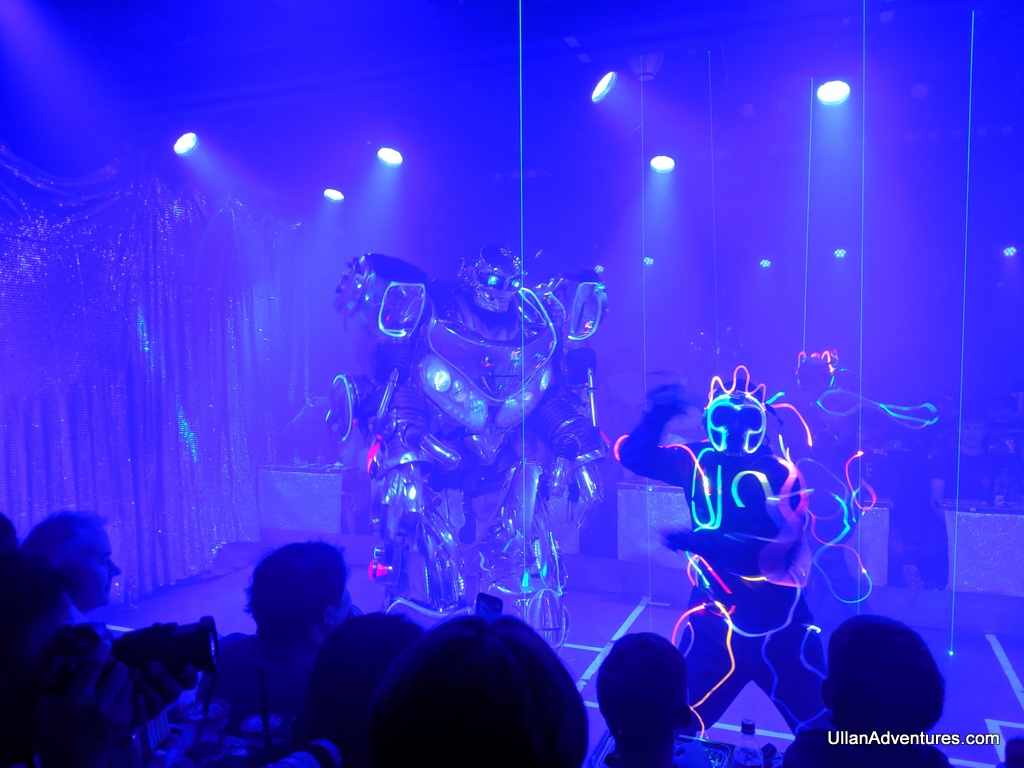 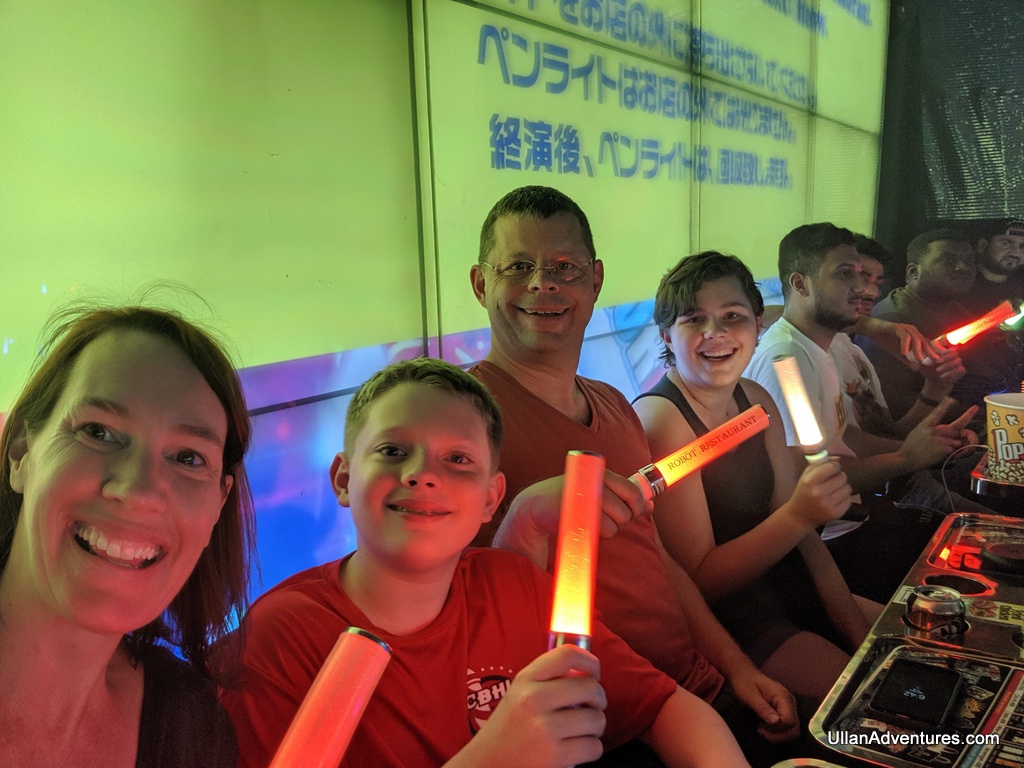 At the start of act 4, they handed out light sticks and I was looking forward to seeing the grand finale of robots and then having it be over.  Unfortunately, a wave of nausea and belly discomfort hit as soon as it started.  I needed to get to a bathroom ASAP, but couldn’t as the show started and we were gated in.  So I was stuck there trying not to… well… as the show went on and on and on.  I just put my head down to try to get thru it.  Occasionally I’d glance up and found it to be the worst of the 4 acts – girls dressed up weird and singing and I don’t even remember what else happened except that it was awful and I just wanted out of there so badly.  We all did.

Once the show was over, we had to wait for them to unlock our gates, then for everyone to clear out, then walk up the 5-6 stories (they closed the lower bathrooms), and then I come to find out there is no bathroom there, but I had to walk to the ticket office to find a bathroom only to find 2 single bathrooms with quite a line.  The whole thing ended up being a nightmare.  But even if I wasn’t feeling ill, it still was a waste of time and money to go and none of us were happy with the experience.  Though upon reflection, I’m kind of glad we went as it was such a crazy spectacle and unlike anything I’ve ever seen (or ever hope to see again).

At this point, we were starving so we wandered around Shinjuku looking for a suitable dinner.  This proved harder than you’d think, but eventually we found a great little restaurant that made each of us happy. 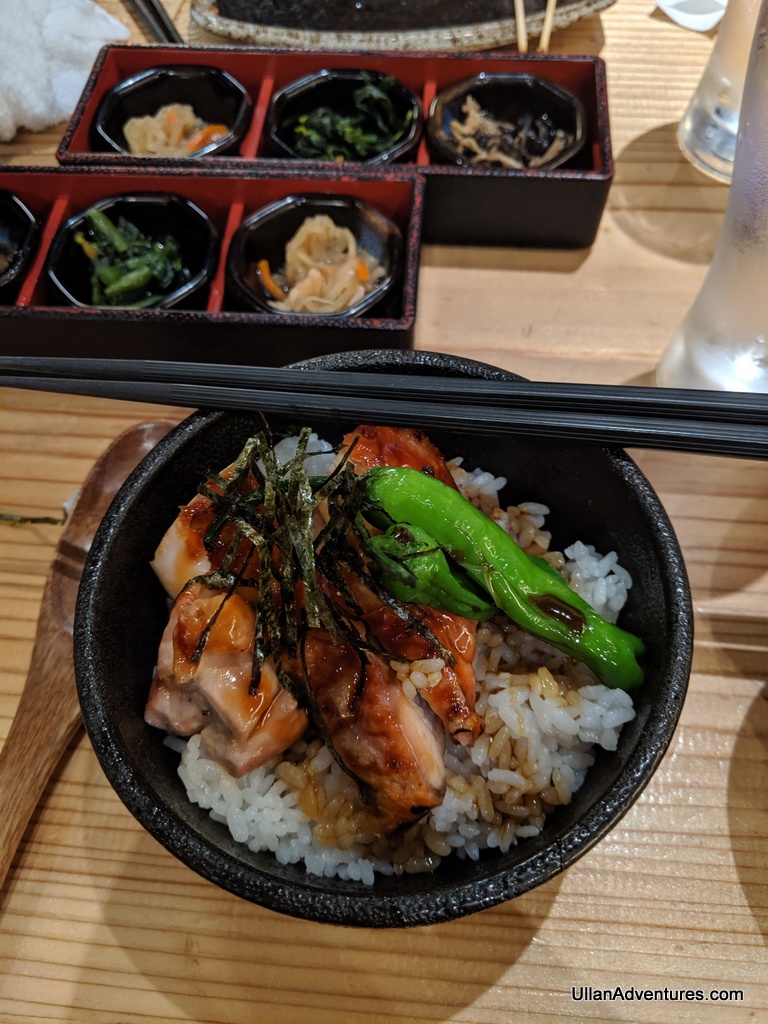 After dinner, we wandered around Shinjuku and got some great views of the giant Godzilla that attacks the area! 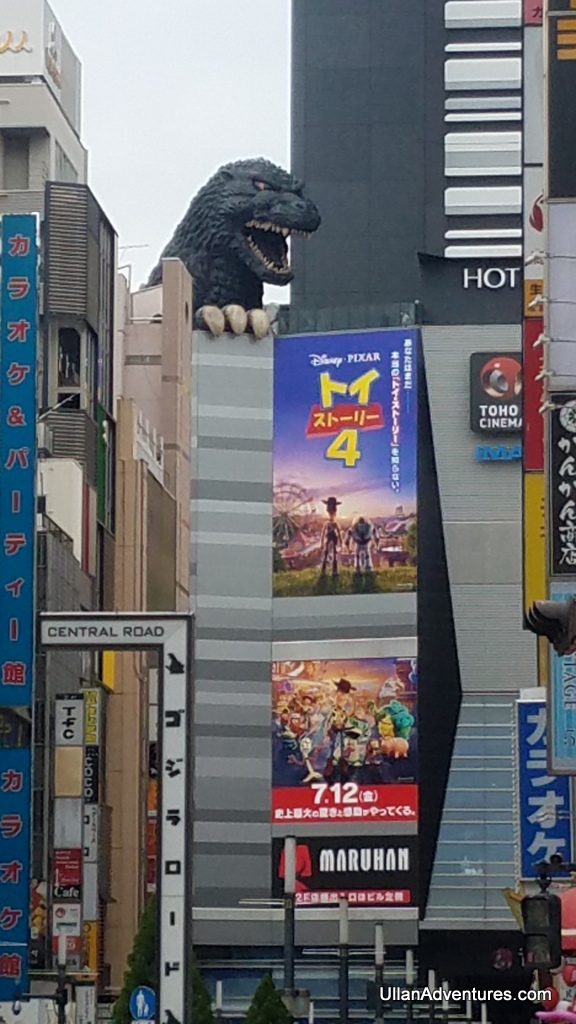 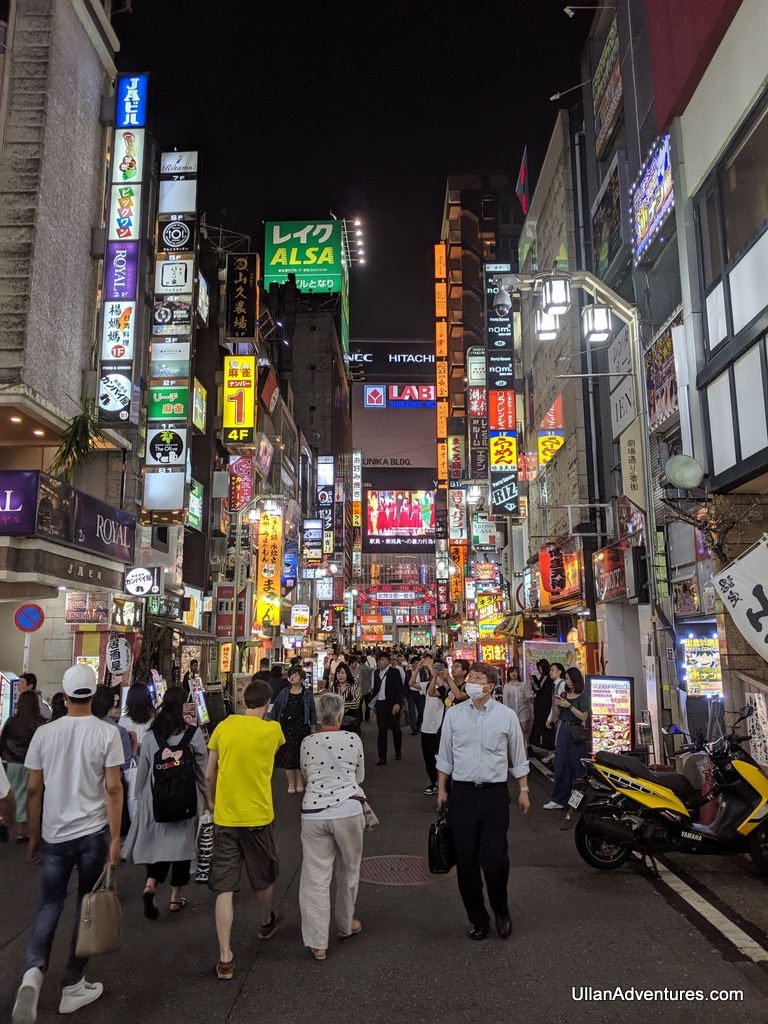 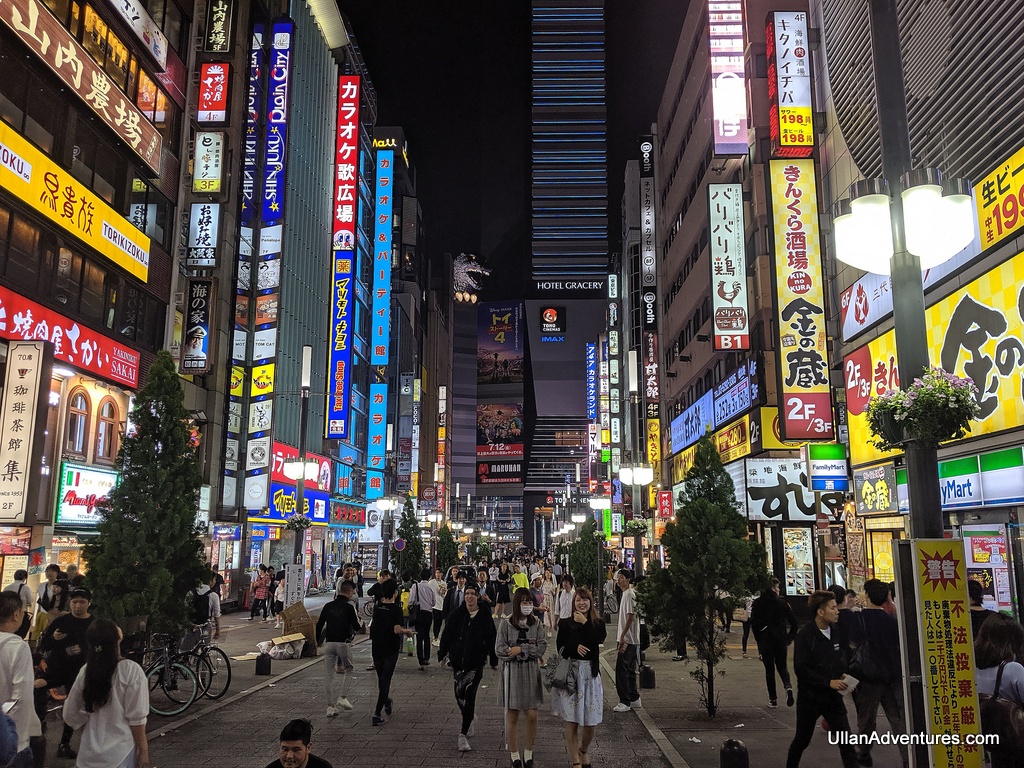 At this point, we were exhausted so we went back to the rental for some much needed rest and sleep.