You Sank My Battleship! 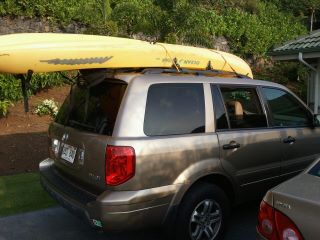 It seemed like a good idea at the time.

We’d just bought a Honda Pilot so we could haul things, and were looking for a kayak.

Kirsten found one at a yard sale a couple weeks ago and $160 later, we were the proud owners of a sea kayak.

This morning, we got a beautiful crystal-clear and breezy day, and decided to take the kayak on its maiden voyage.

About 11, Kirsten and I launched at Keauhou Harbor and headed down the coast a mile or two.  Some decent sized ocean swells, but nothing we couldn’t handle.

Houston, we’ve got a problem
By the time we got to where we wanted to jump out and snorkel, I noticed that water was pooling in the seating area.  (there’s a hole it should be draining through).  This seemed like a problem.

It was then I also figured out that we were sitting low in the water – we were definitely sinking!

Unfortunately, the area we visited was virtually all cliffs with rough rock to deal with, so bringing the kayak into shore wasn’t an option.  On a calm day, we might have been able to get out somewhere, but it was too dangerous today.

I tried getting into the water to see if reducing the weight in the kayak would help.  Learned a few things once I did that.

We had each brought our snorkel gear, so our basic idea was for Kir to get the kayak as far back towards the harbor as she could, and then we’d just swim the rest.  Hopefully we’d get a passing kayaker to get help.

Rescue Me!
After a couple minutes, Kirsten spotted one of the big Zodiac boats that give coastline and dolphin tours.  She was able to flag them down and they came by to see what we needed.

We were grateful when they agreed to help out.  They got Kirsten and her stuff out of the kayak, and then I climbed onboard out of the ocean.  One of the deckhands cinched our kayak to the side of their boat, and held on for added stability.  We then took about 15 minutes to cruise slowly back to the harbor.

Luckily it was the tail-end of the tour and we didn’t ruin the sightseeing for them.

Many mahalos (thanks) to the Captain Zodiac crew, who saved us from a really crappy afternoon!

Reflections
It may sound strange, but Kirsten and I both had a blast with the whole ordeal.

It wasn’t the safest situation, but neither of us perceived any mortal danger, and it ended well, so why not enjoy?

I don’t think about either of us as adrenaline junkies, but we do find a lot of fun in this sort of stuff.  And it was cool to finally get onto one of the Zodiac boats.  I’m sure the passengers of the boat got plenty of great pictures of 2 morons and a sinking boat.  I’m sure they were hoping the rescue would be more like Baywatch, but too bad for them.

And now we’ve got a kayak that seems to leak for reasons yet undiscovered.  Not sure if it’s worth paying to fix or if we just need to start over and pony up for a proper, seaworthy kayak.