I knew about triathlons especially since my best friend competed in them.  But it was never on my radar as something I wanted to do, largely due to my limitations in the past with biking and running.

That all changed when we moved to Kona and got to watch the Ironman World Championships in 2011 and 2012.  I was so inspired by the event and watching people with far more physical restrictions than I, complete that race.  I have never been so inspired in my entire life yet I still didn’t know how it could ever happen for me.  Chuck was equally inspired – so much so that he completed the Ironman Honu 70.3 in Hawaii in 2013.  It was incredible to cheer him on, yet it still left me on the sidelines.

That is until we realized that you can compete in some Ironman races as a relay team.  This changed everything!  I now had the chance to participate in a triathlon.  But not just any triathlon, an Ironman!  Team Trifecta was born: I would be the swimmer, Chuck would bike (his favorite of the 3 sports), and a friend of his, Dean, would run.

The first step?  Learning to swim distances.  I started swimming laps while living in Kona and even took some masters swim classes by a world class coach there.  But I still had never swam very far or had my technique correct.

My first session I made it about 400 yards (with many breaks).  My race distance was 1.2 miles or 2100 yards so I had quite a ways to go.  I found a swim plan to follow and loosely followed it to keep me on track.  However, there were some glitches along the way that kept me out of the water sometimes for weeks at a time, the worst being my left shoulder seizing up and preventing me from swimming.  Because of that, I put in the bare minimum amount of training.  To say I was undertrained and nervous come race day would be an understatement.

To add to that, I got a nasty cold leading up to the race and was so sick the day before I wasn’t sure if I could even compete. Chuck called Dean to see if he could swim in my place, but Dean wasn’t ready to swim 1.2 miles and neither was Chuck.  So with our fingers crossed, we headed to the race and hoped I would feel good enough the next day.

If I couldn’t swim, Chuck and Dean wouldn’t get to compete at all.  I would be taking all their training, and hard work away without letting them even participate.  The pressure on me felt enormous.

The night before the race I was still quite sick, but at this point, the race hinged on me just doing it regardless of how I felt.  My shoulder was still quite bad so that was a huge wildcard as well.

Race morning we were up around 4am.  We headed the 45 minutes to Dean’s rental house where he made us breakfast.  The house was about 5-6 blocks from the race start, so we walked there around 6am.  After getting body marked, I ventured out into the water for a warm up swim.  The water was cold enough to make the race wetsuit legal (yay!), yet it wasn’t as cold as I feared. 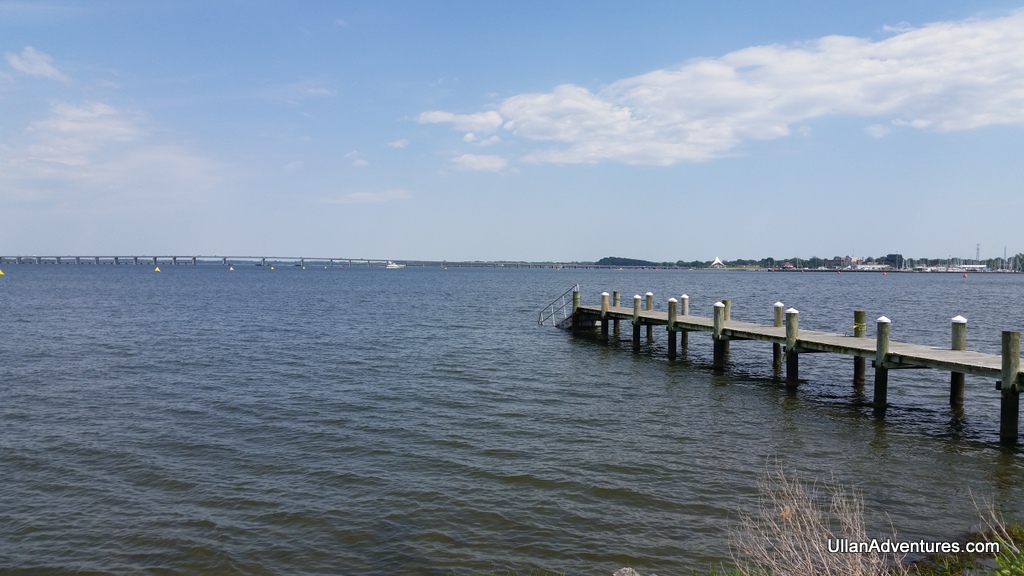 The swim course – see the yellow buoys way out there?!? 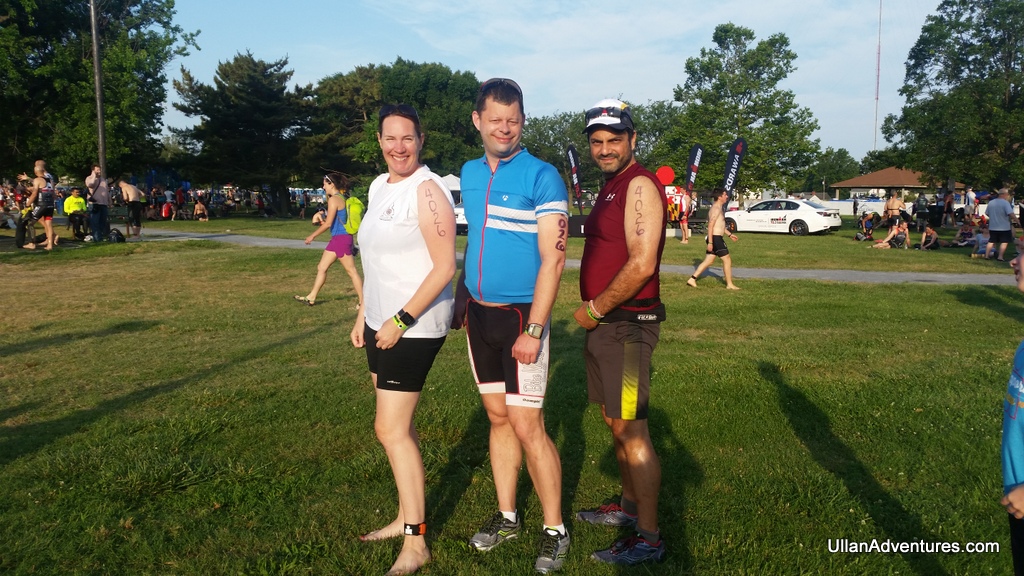 Then it was time to wait.  The pros started then the amateur competitors started in waves.  I was in the last wave so I had to wait around for about an hour. 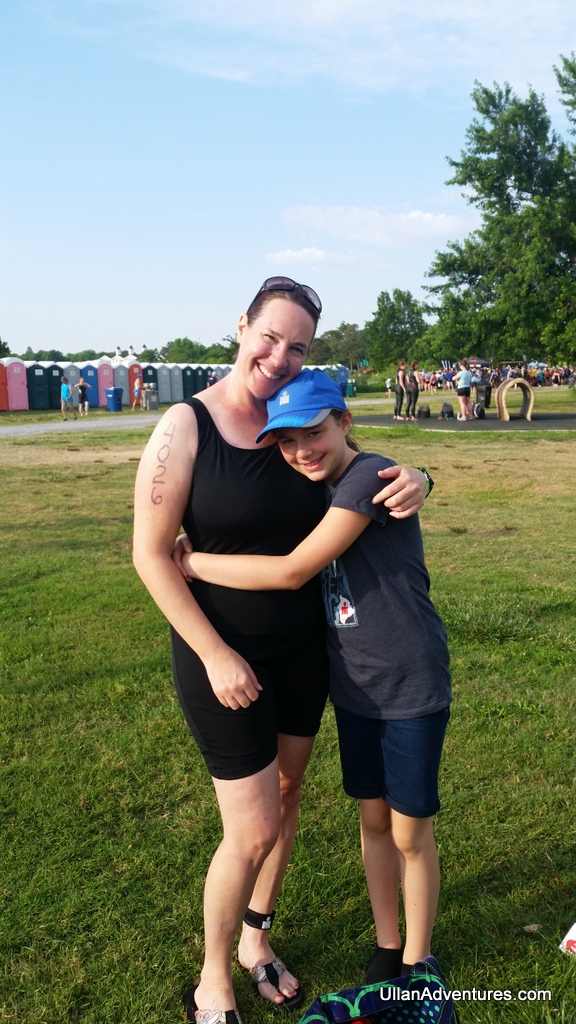 Getting some pre-race love from my girl 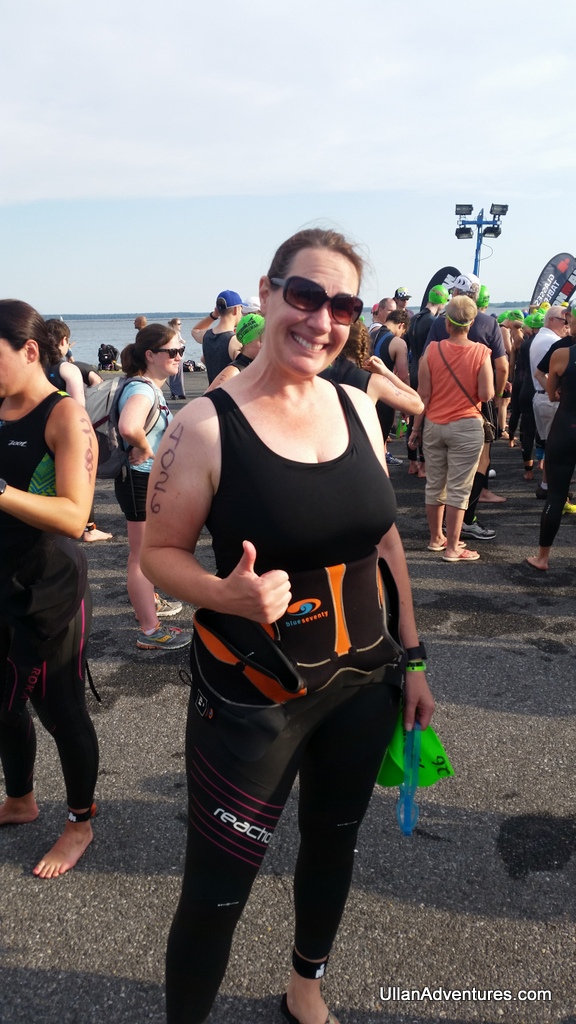 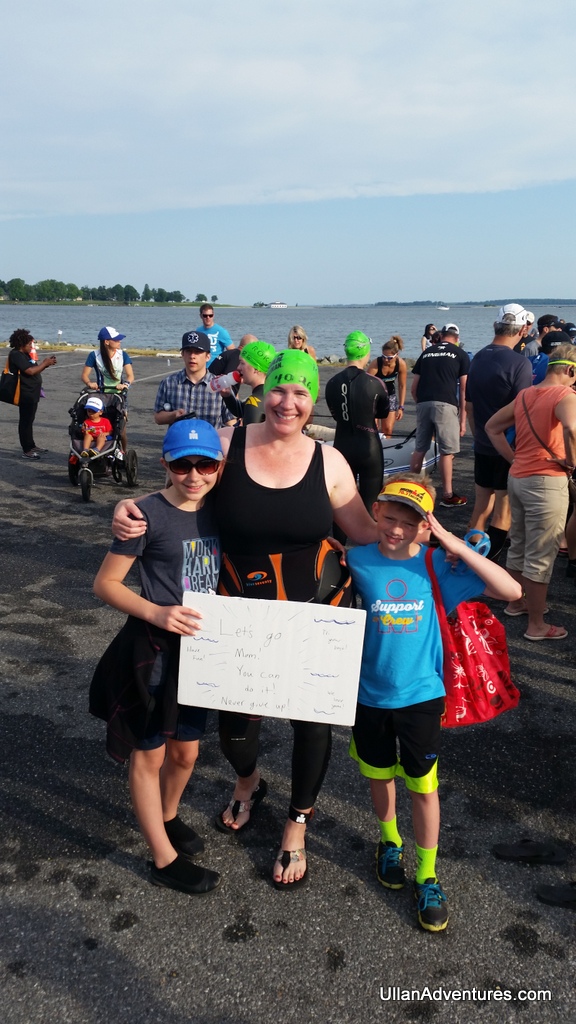 The kids giving me some encouragement! 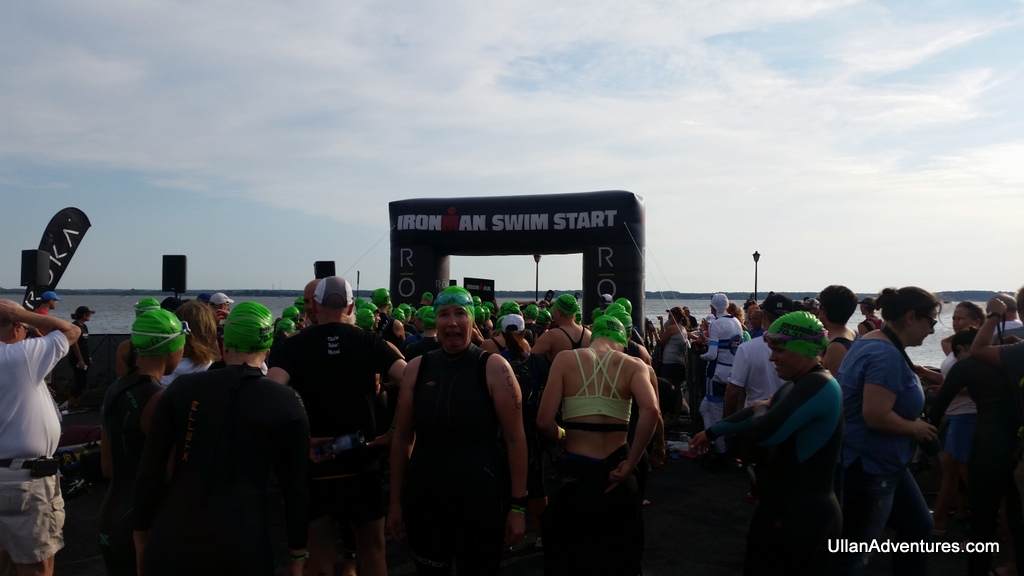 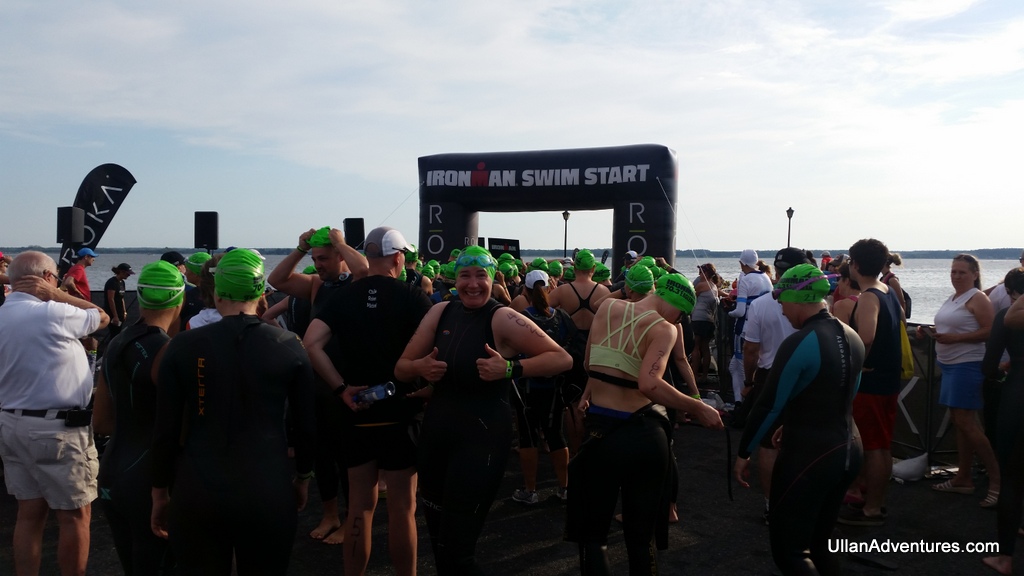 At last it was time.  We walked down the boat ramp, lined up behind the start buoys, and waited for the starting horn.  Then we were off! 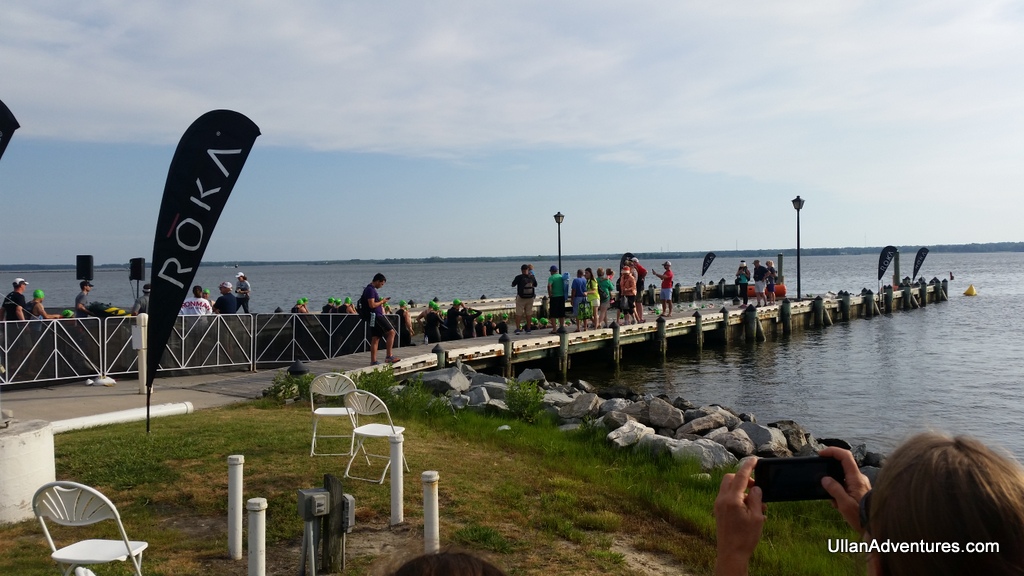 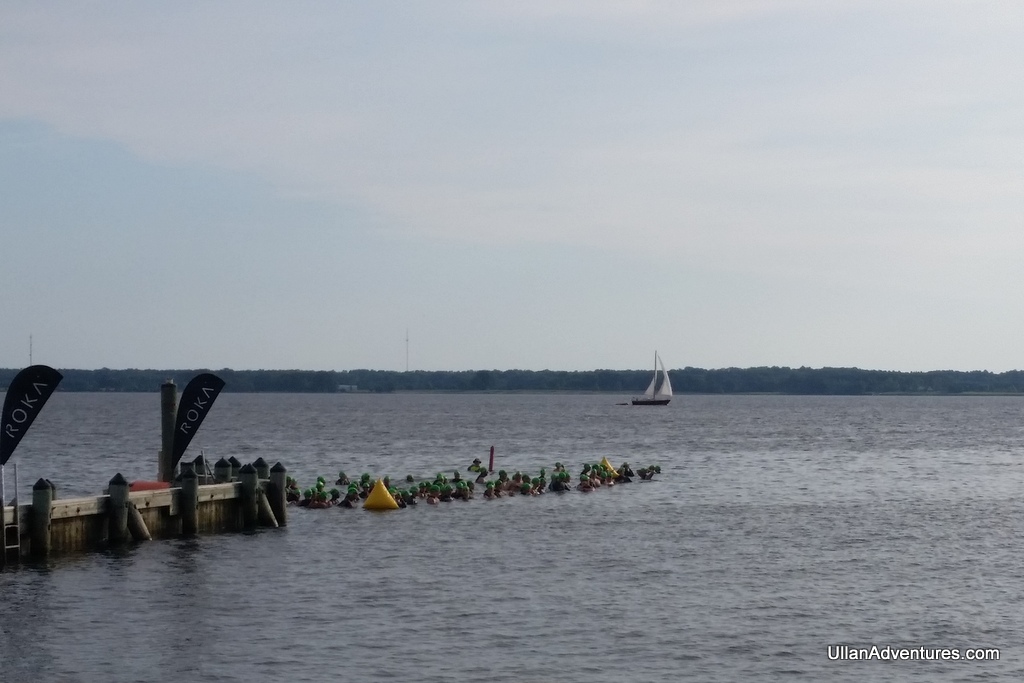 I stayed towards the back, which still didn’t help me from being run over by one of the swimmers and getting caught under the boat he was tugging.  After the initial flurry, I found myself alone in the back.  I knew I had 1 swimmer behind me, but I think that was it.  And given that we were the last wave, I think I was the 2nd to last person out there on the course.

My biggest concern was making the cut off time of 1:10.  I was pretty sure I could do the distance as long as my shoulder held up, but I wasn’t sure how fast I could swim given the conditions and how sick I was.  And I didn’t have a lot of buffer time as I’m not a very fast swimmer.

I got maybe 200 yards (out of 2100) and realized I was exhausted.  I was just completely spent.  If I didn’t have Chuck and Dean’s race hinging on my swim, I would’ve quit then.  And anyone that knows me, knows that I never quit anything unless I have no choice.  But frankly, I felt I had no choice but to keep on swimming.  Dory’s “keep on swimming” line kept going thru my head over and over.

To make matters worse, my goggles fogged up instantly so I couldn’t see.  I also pretty quickly realized how bad I was at spotting the buoys so I was swimming pretty blind.  I even started closing my eyes because it didn’t make any difference.  Of course this caused me to go completely off course the entire way – I kept getting near the water patrol and they’d send me back towards the course over and over again.

There were buoys every 100 yards so I would take a few second break at every buoy to clear my goggles, check my time, and take a break.  Of course, every time I did, the current would push me backwards and off course so I’d have to re-swim the distance back.

The good news was when I realized a few hundred yards in that I was on record pace (for me!).  I was swimming faster than usual so I as long as I could keep it up, I was in no danger from getting picked up or missing the cut off.  This took a HUGE load off my mind so then I could just focus on swimming.

Once I hit the first turn, everything got worse: the current picked up and pushed me even further out into the river and I was exhausted beyond all belief.  Luckily since I was the 2nd to last swimmer, the water patrol and boaters were all cheering me on, telling me how much time I had, and helping me stay on course.  A woman in a kayak came up and offered to let me hold on to take a break – at first I declined, but finally gave in and held on for about a minute to catch my breath.  In the Ironman, you’re allowed to hold on to the water patrol, you just can’t use them to make forward progress.

I owe the rest of my race to this lady.  She stuck with me the rest of the race and became my eyes, time keeper, and cheerleader all in one.

Once I got to the turn for home – with about 700 yards left – I had plenty of time, but I was cooked.  Plus, the wind picked up and kept blowing me off course.  But with this kayaker beside me, I was able to spot off of her and she kept me from going all over the place.  She also kept me abreast of the time and distance I had left and I knew I would make it if I just kept going even though every part of me wanted to quit.

Eventually I made it to the end of the course and, after thanking my kayak angel, I ran up the ramp and across the timing mat!  1:03:25!  I DID IT! 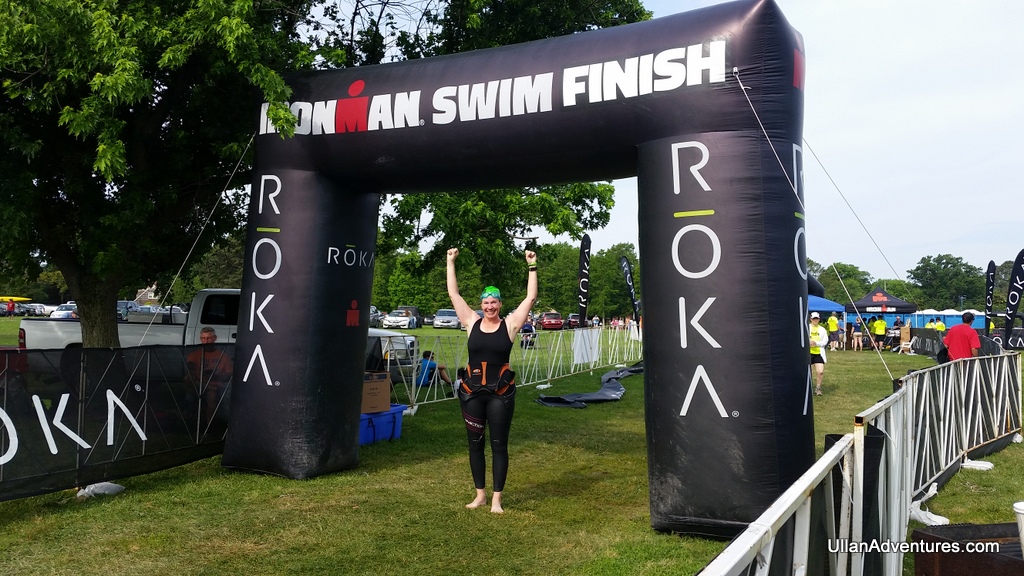 I heard the kids ringing their cowbells and cheering for me, but I still had to run thru the chute to the relay tent to tag Chuck for the bike.  He gave me the best hug and said he knew I could do it, grabbed the timing chip from my ankle, and took off for the bike.

I then found the kids who gave me big hugs.  And Mara took my victory picture above.

The bike started off well, as I was reasonably trained and the course was very flat, allowing me to get into the groove.  Heading out on the bike loop, the wind was in my face and I raced a bit hard, trying to set a good pace.  That worked for a while, but I bonked about 20 miles in, causing me to get faint and spend a few minutes alongside the road recharging and hydrating.

Down the road a few minutes, my energy recovered, but then I started with cramps in my right foot, causing me to get off the bike for a bit every few miles.  All else was good, but it added up to a slow race when I had hoped to be sub-3:30. 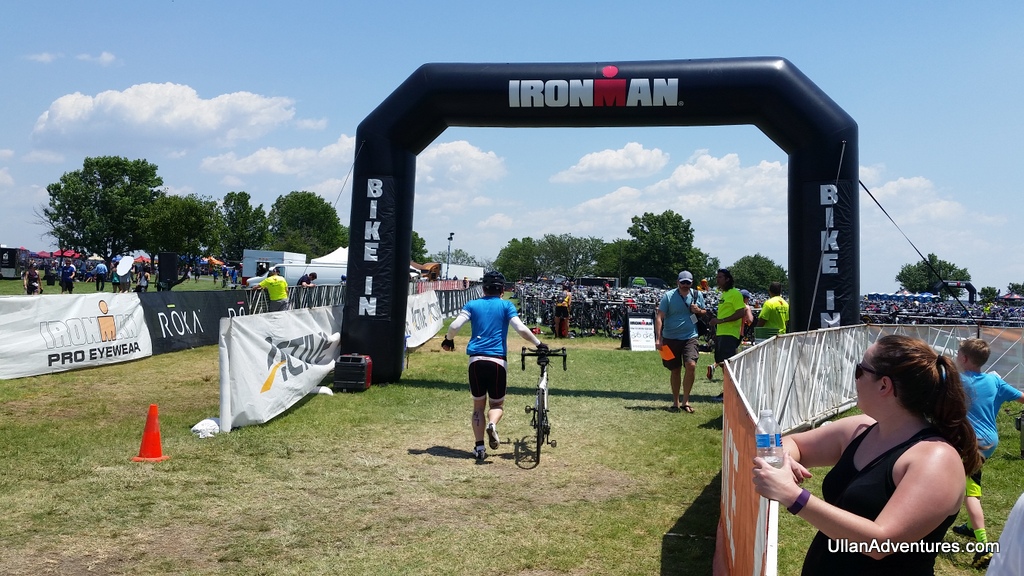 Once Chuck racked his bike, he tagged Dean who went off on his 13.1 mile run.  It was about 1pm at this point and brutally hot.  Many of the competitors coming in looked so haggard from the sun and heat, so we really felt for Dean.

While he was out there running, Chuck, the kids, and I found some shade to relax in and took advantage of the free food for the athletes.  Chuck and I finally were able to relax at this point as our part was done and we’d both finished.

As it got to Dean’s estimated finish time, we headed over to the finish so we could cheer him home.  It was so great hearing our team name announced as he crossed the finishing mat!  Team Trifecta Finish Time: 7:45:25.  And 23rd out of 26 teams! 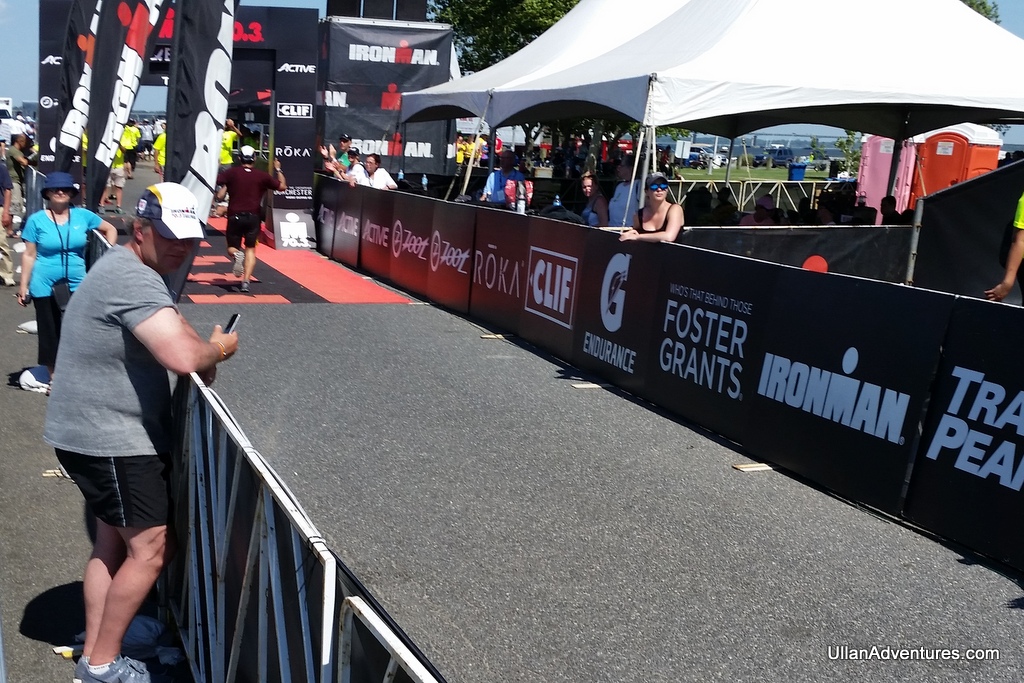 We met him at the end of the finish chute where he had each of our medals and a hat. 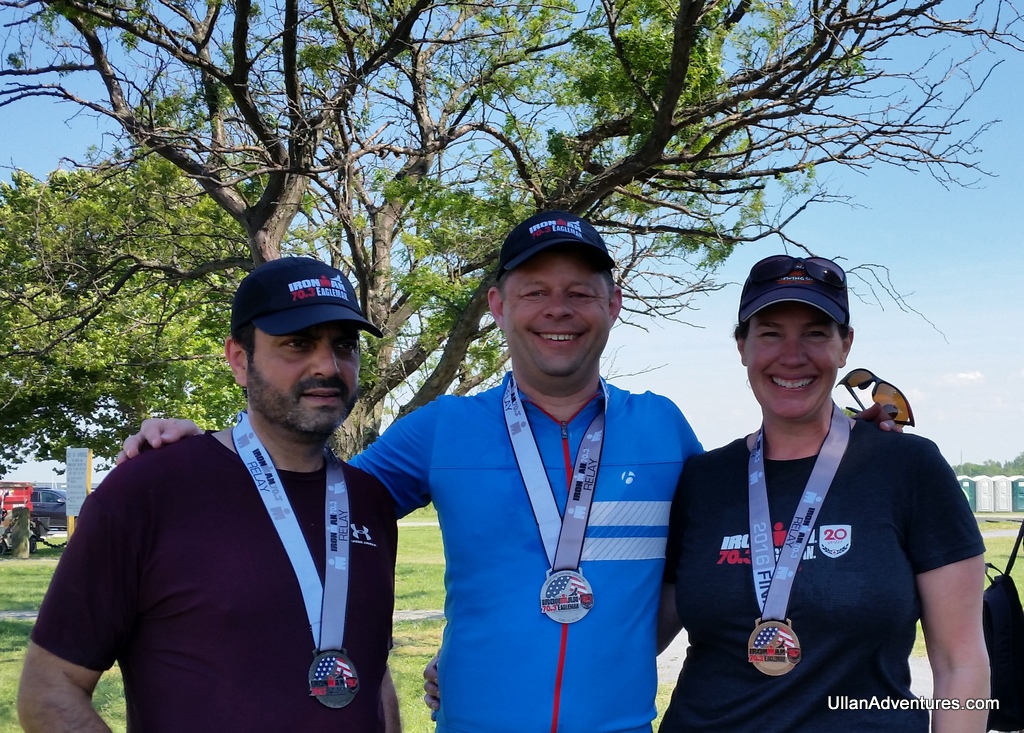 Once the race was over, we all left pretty quickly so we could get home at a decent hour as the kids had school the next day and Chuck had to go into work.

I was elated the entire day and evening from the experience.  Unfortunately, I got even more sick on the way home and was even worse the days that followed.  But that didn’t damper my excitement over having competed in an Ironman and finishing!  I’m still so proud of my (our) accomplishment and know that I’m even tougher than I thought.