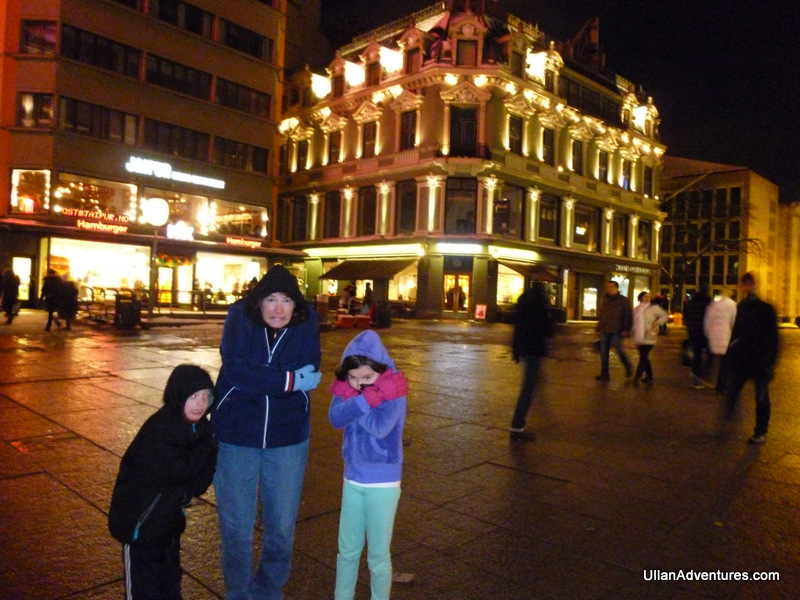 Once we made our decision to come to Spain in the winter of 2014, we started checking airfares from Bangkok to Spain.  We found it was cheaper to return to the USA using our frequent flyer miles then fly to Spain from the US.  I then found an incredible deal to fly one way from JFK to Oslo, Norway on Norwegian. We knew we could drive or easily get to JFK AND that we could fly from Oslo to Spain pretty cheaply.  So, another long layover plan was hatched.

Due to airfares only being cheap for one day, the crazy cost of things in Oslo, and the fact that it was Norway in January, we only opted to stay one night in Norway.  We arrived in the morning and had that entire day, one night and most of the next day as our flight to Spain didn’t leave til 7pm.

I kept hearing that Norway was expensive but I figured it was like San Francisco or London or Paris expensive.  Imagine my shock when we arrived, went to get breakfast and saw that a stack of pancakes was over $20USD.  A cheeseburger and fries was $30USD.  Granted this was at the airport, however, the prices were pretty indicative of how much things cost everywhere.  Yeouch!

We ponied up for a taxi which was $115USD from the airport to our hostel in the center of town.  After a quick nap, we ventured out and let me tell you, it was COLD!  Even though it was the same temperature it’d been a few days while we were back in the US, it felt even colder.  Bone chilling cold.  Of course, the Norwegians didn’t seem to care and we saw many people eating outside in 15 degrees even though it was snowing and there were icicles hanging from the awnings. 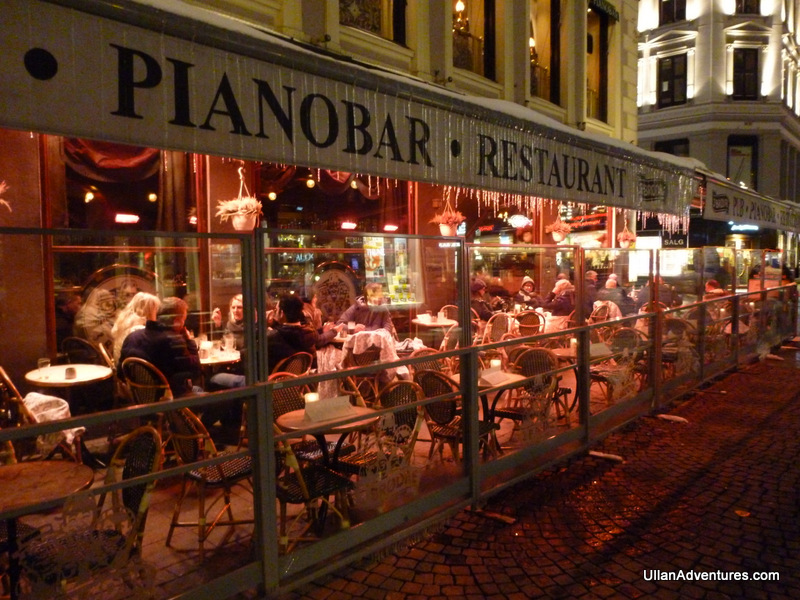 Note the icicles on the awning

The next day we headed to the Viking Ship Museum.  Part of the 3rd grade curriculum I’m using covered the Vikings and Norse Gods and Goddesses, so I taught the kids about Vikings and then took them to the museum to see real Viking ships.  It was pretty darn cool. 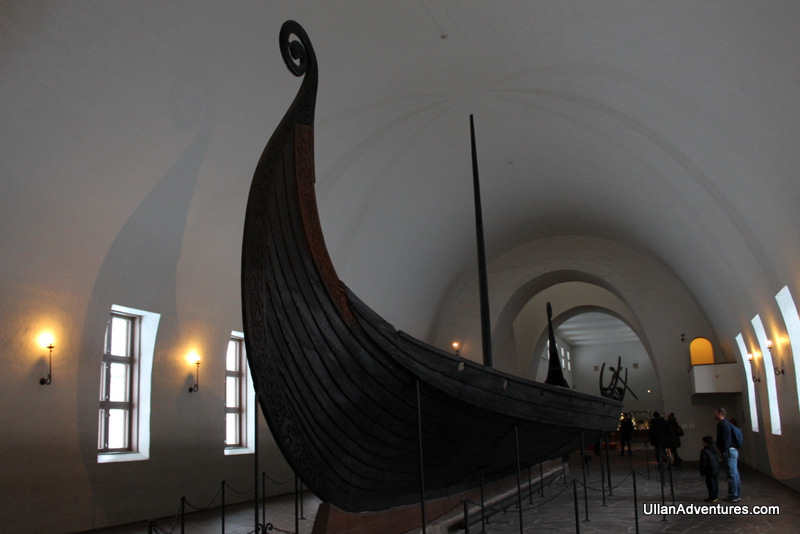 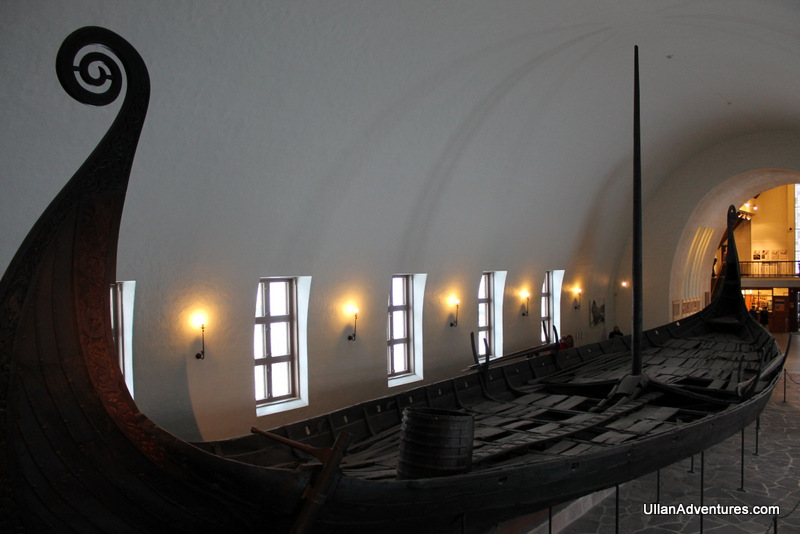 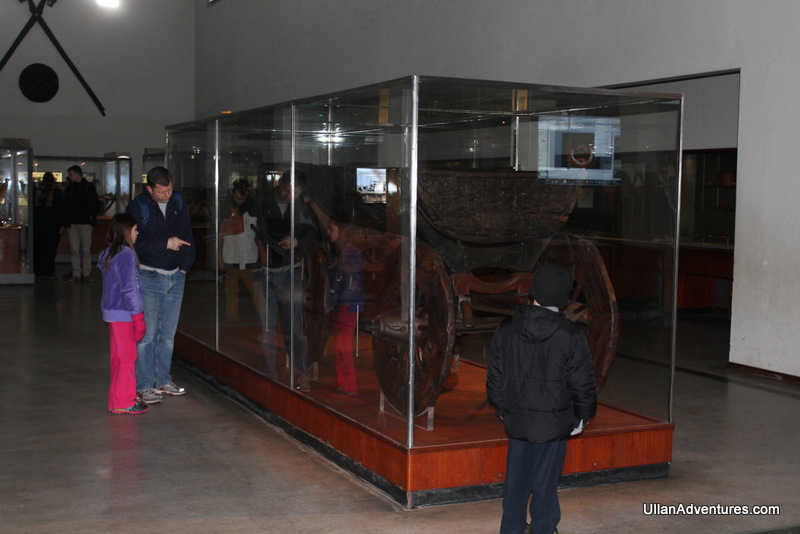 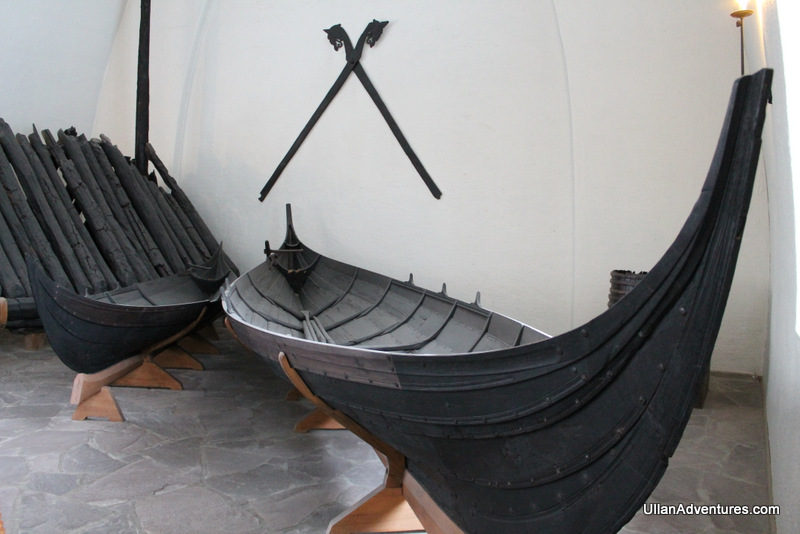 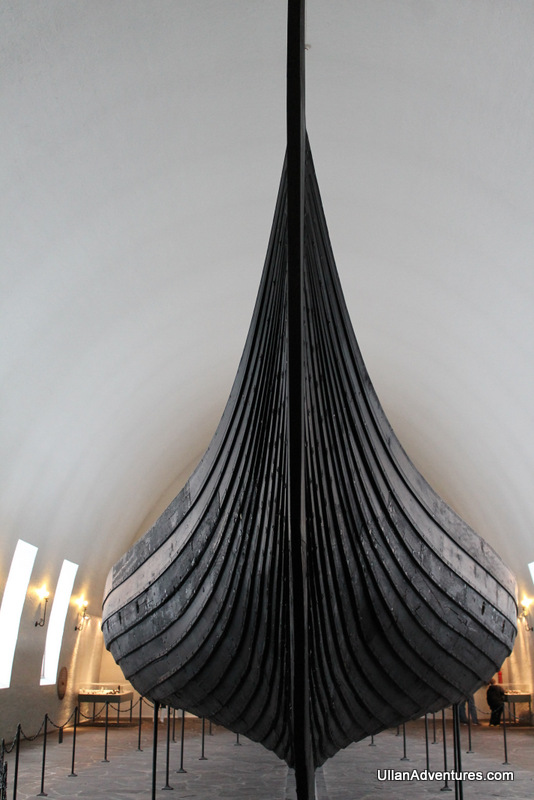 Then, of course, Beckett had to go all Viking-style: 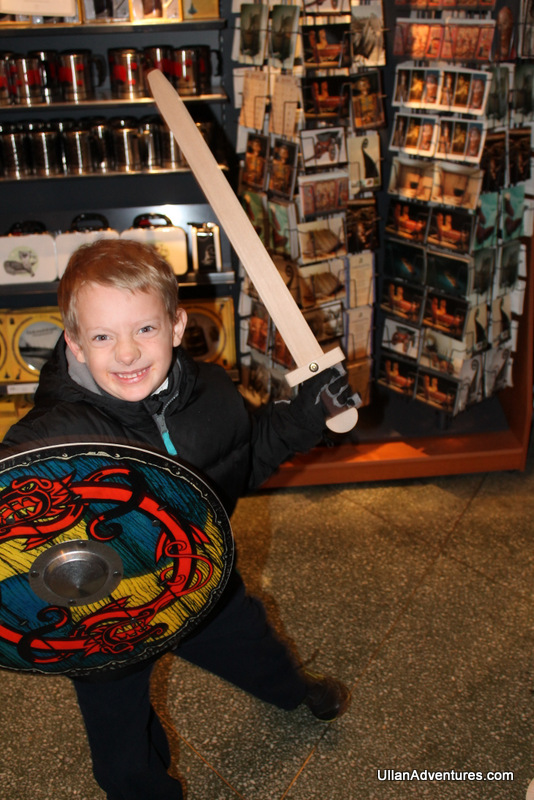 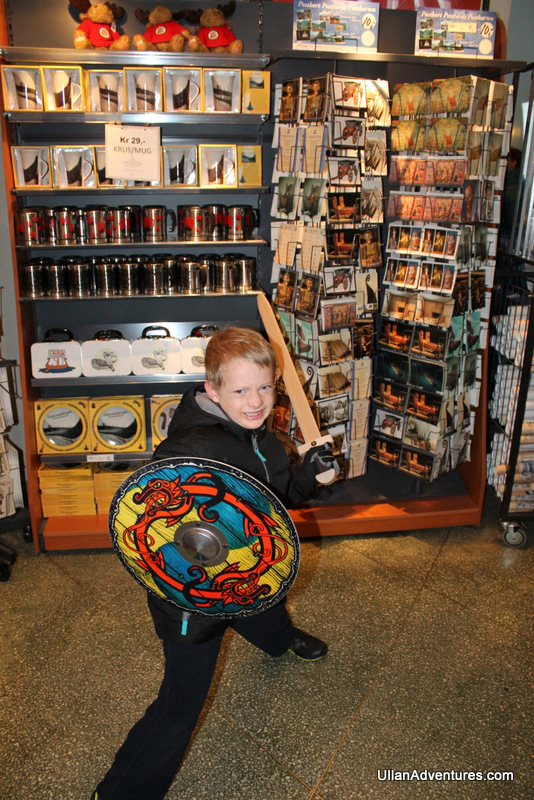 After the museum, we took the bus into the center of the city, got lunch and wandered around a bit.  I loved the downtown and can’t wait to go back in the summer to hang out (and eat outside in more normal temps). 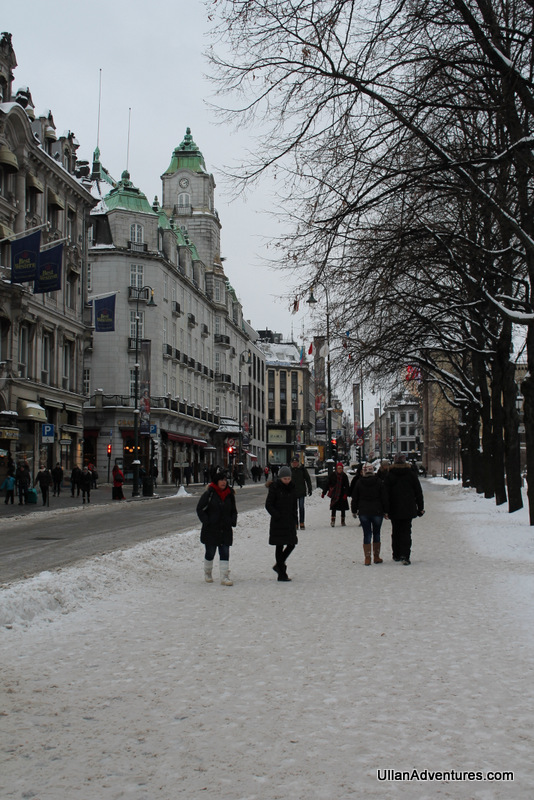 Love that they don’t shovel the sidewalks or even lay anything down. 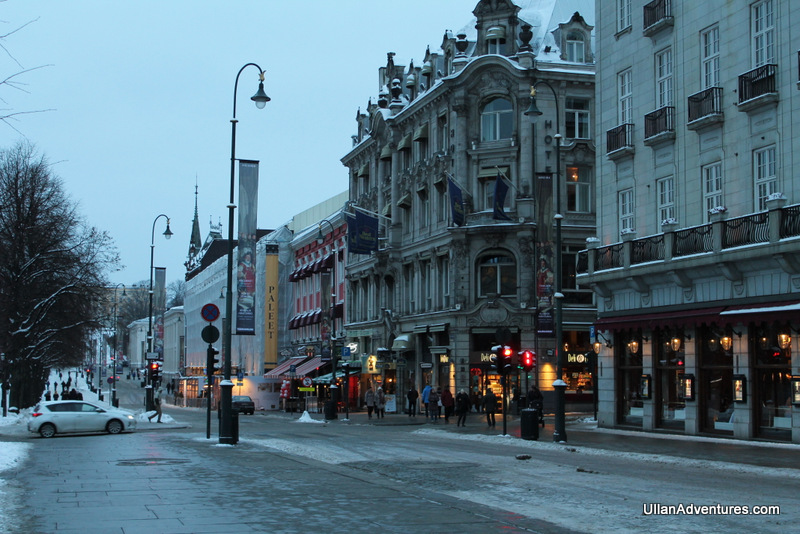 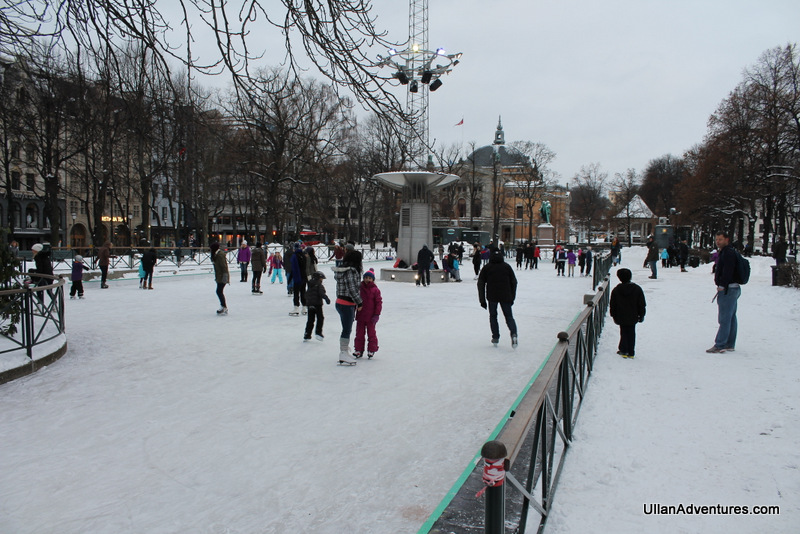 Loved this outdoor ice rink. However it was way too expensive (and too cold) to try it out.

Then our time was up and it was time to grab our bags, take the train to the airport (only $60US instead of $115!) and off we went to Spain.

Beck on the train to the airport. This is how we all felt!

Logistics: As mentioned above, Oslo is extremely expensive so don’t expect to go there on a budget.  When we arrived at Gardermoen airport (OSL), we opted to take a taxi into town even though it was the most expensive option.  We did this because after traveling from DC-JFK then taking a red-eye to Norway, we didn’t feel like schlepping 4 suitcases, 4 carry-ons and 4 tired people to the train then walking a half a mile to our hotel.  The taxi trip took about 45 minutes and cost $115USD.

We stayed at the Oslo Hostel Central downtown in their Family Room which was a private room and had 2 twin beds and a set of bunk beds.  The room was really big, had a little sitting area, had a view and had a huge private bathroom.  It also included breakfast which was your standard European hostel breakfast.  We booked it via Booking.com and it cost about $190.  Yes, almost $200USD for a hostel.  I told you it was expensive!

We took a taxi from our hostel to the Viking Ship museum for about $50USD which was astonishing.  So we took the bus back (there is a bus stop about a block away from the museum) which cost about $10USD if we remember correctly.  You can buy a ticket on-board from the bus driver although I think its cheaper to buy the tickets ahead of time.

We didn’t want to spend another $115USD to get back to the airport, so this time we hauled our bags the 1/2 mile to the Oslo Central Station (Oslo Sentralstasjon).  You can buy tickets at the ticket booths there and the kids rode free with a paying adult.  We took the FlyToGet train which took about 20 minutes and cost about $60USD.  Definitely the way to go if you don’t have too much stuff or have to walk very far.

Next post: Going to a FC Barcelona Fútbol Game