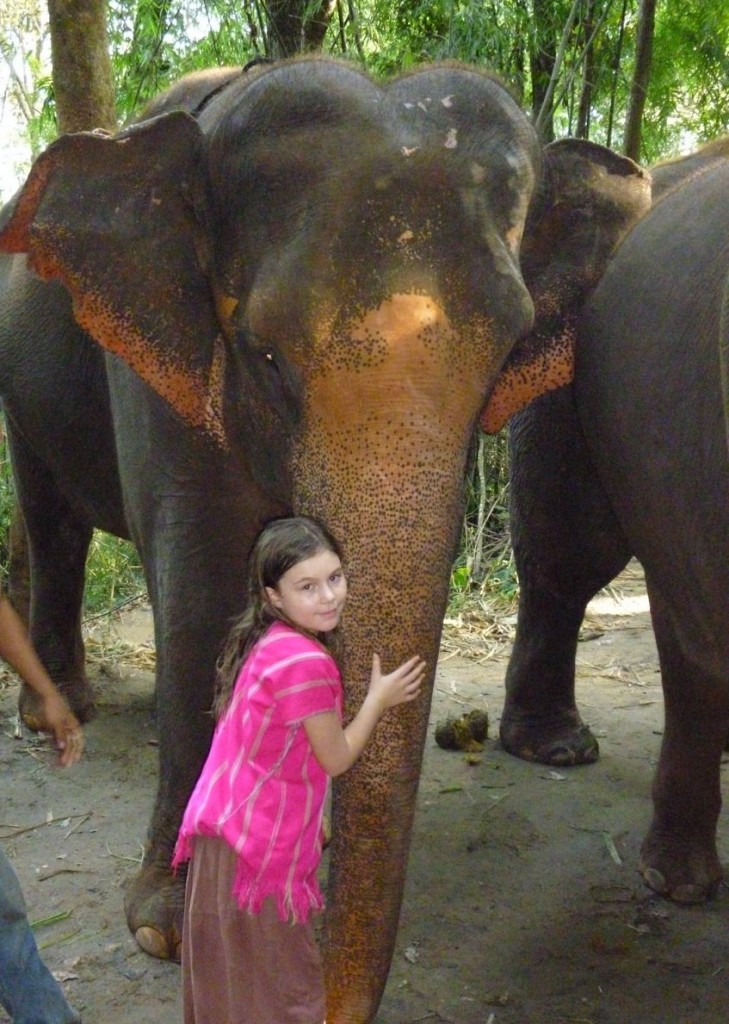 Sadly we had to deal with Mara’s first love and first heartbreak all in a single day.  Her name is MaeKwan and she’s an Asian Elephant that Mara got to take care of for the day.  Leaving her at the end of the day was such heartbreak for Mara and she refused to leave and couldn’t stop hugging her.

And that pretty much sums up the day.

Once again, I lack the adjectives to fully describe our day at the Patara Elephant Farm.  Amazing. Educational. Incredible. And dare I say that this day will have a lasting impact on my kids.

They picked us up at our house, then drove about 20 minutes to part of their farm/reserve.  There we were able to meet, feed, interact with and even get run over by some mamma and baby elephants. 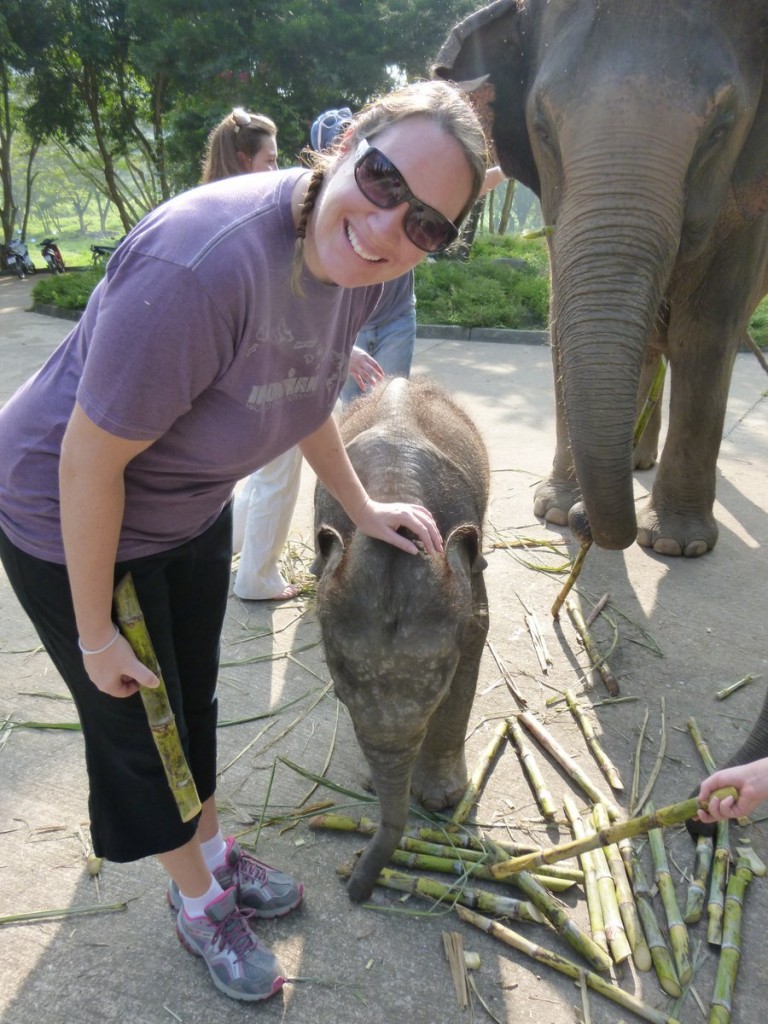 This little guy was so playful and rammed into me a few times. Stepped on my toe too but it didn’t hurt.

We even got to interact with a baby elephant that was only 6 days old.  So. Freaking. Cute! 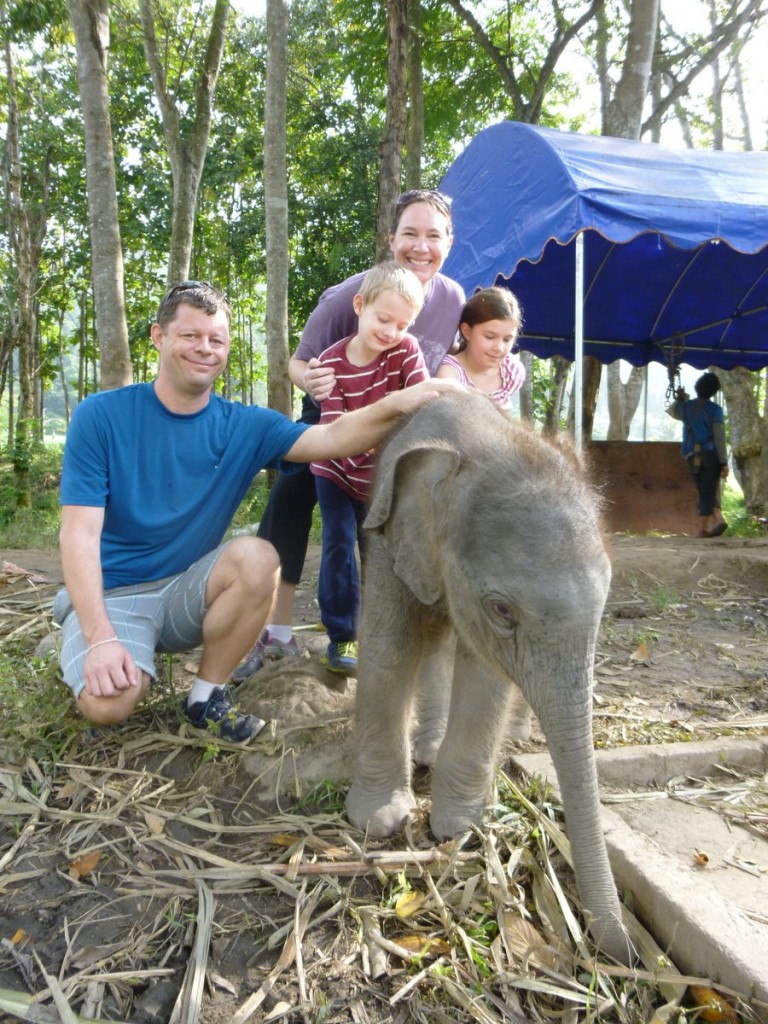 After meeting these guys, we drove about 5 minutes to the main event.  We started with a presentation by the owner about elephants, conservation, their mission at Patara, and some of the realities of the elephant population.  He gave a great talk that was neither preachy or dramatic but set a great tone for the day and made what we were about to experience even more meaningful.  It also made me regret going to the Maesa Elephant Camp which I’d already had mixed feelings about.

After getting our mahout clothes we went to our camp area and got to meet our elephants. (Mahouts are the elephant caretakers.  At Patara, these guys are from the Karen hilltribe and the women of the community make these shirts and riding pants.)

First up was learning how to tell what mood they were in, how to approach them and how to make friends with them (Hint: have lots of sugarcane).  We then fed them and learned their names and some Thai words to communicate with them. 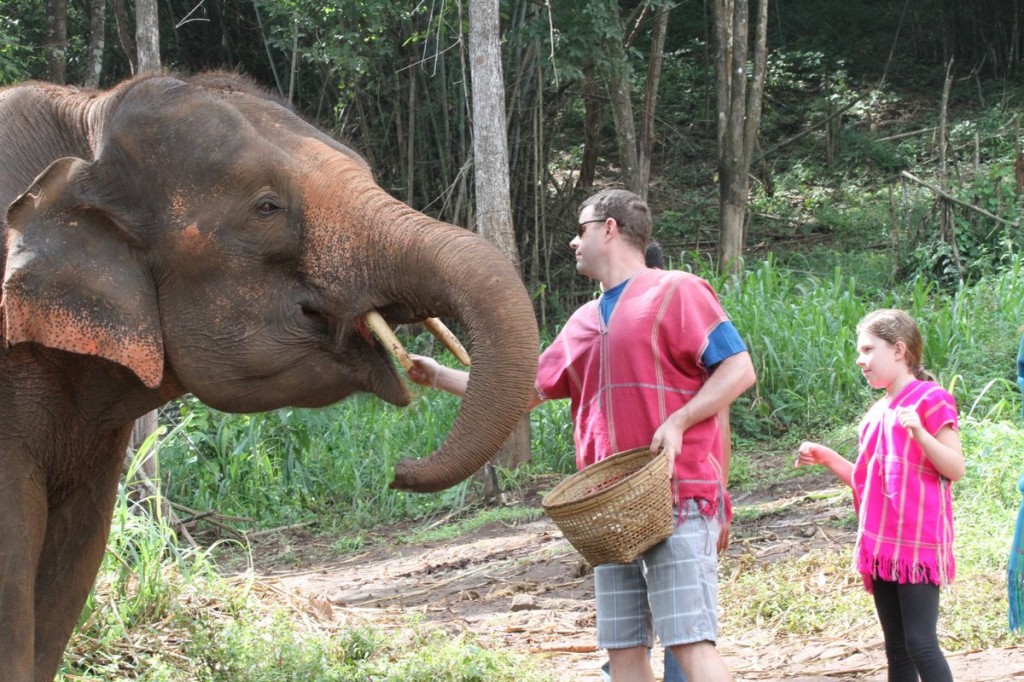 Meeting and feeding MaeKwan.  You can stick the sugar cane way back into the elephant’s mouth. 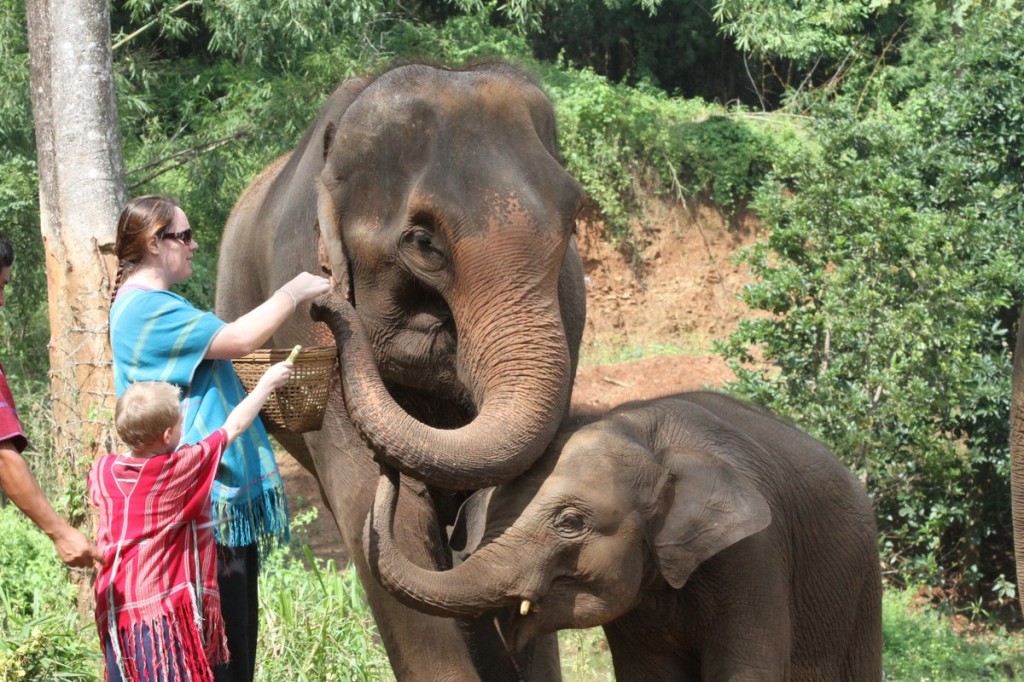 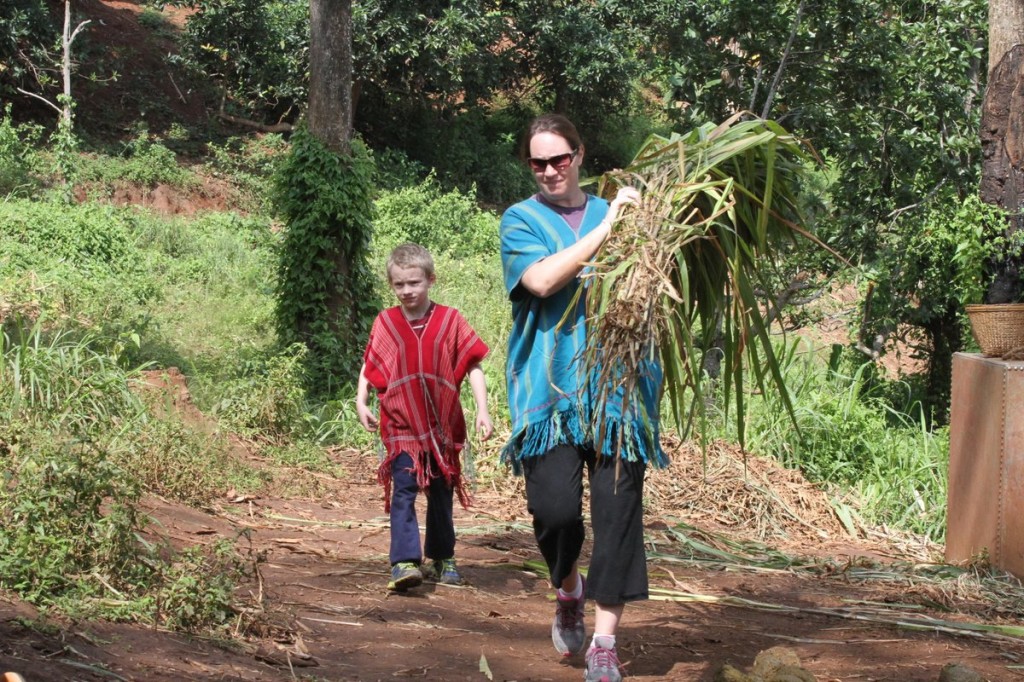 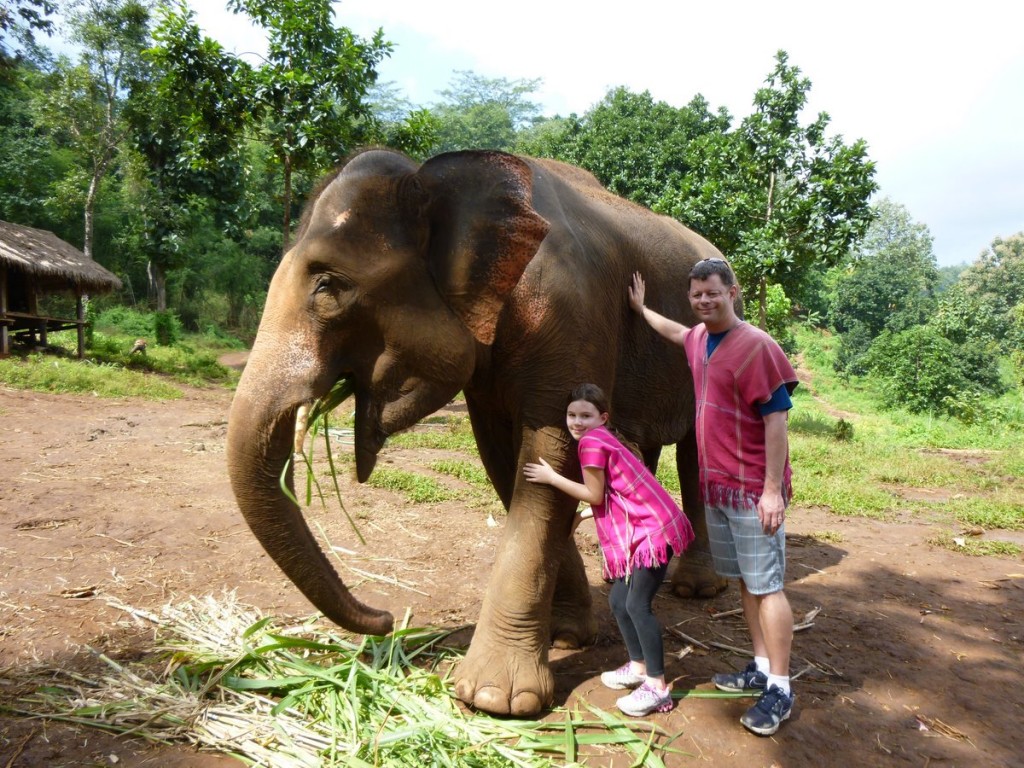 Then we learned how to check their health.  We learned to inspect dirt marks on each side of them (to make sure they’re sleeping evenly on both sides), checking their toenails for sweat (they only sweat thru their toenails), check the tear marks under their eyes and of course, the ins and outs of checking their poop.  How many poops?  Color?  Size of fibers inside the poop?  Smell?  Squeezing it to make sure it holds moisture.  Yeah, seriously.  But it is an important part of taking care of them and really can tell you (well, them) a lot. 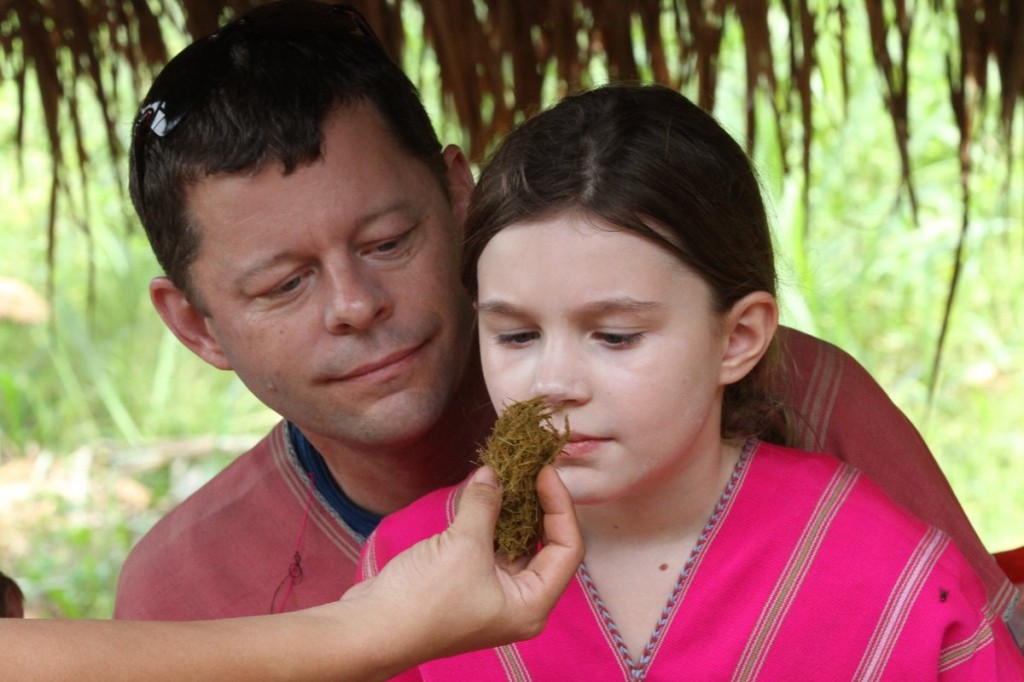 After we checked to make sure they were healthy, it was time to clean them off.  This entailed whacking them with bunches of leaves to remove the dirt they blow over themselves.  Then we walked them to the shower hose and hosed them down. 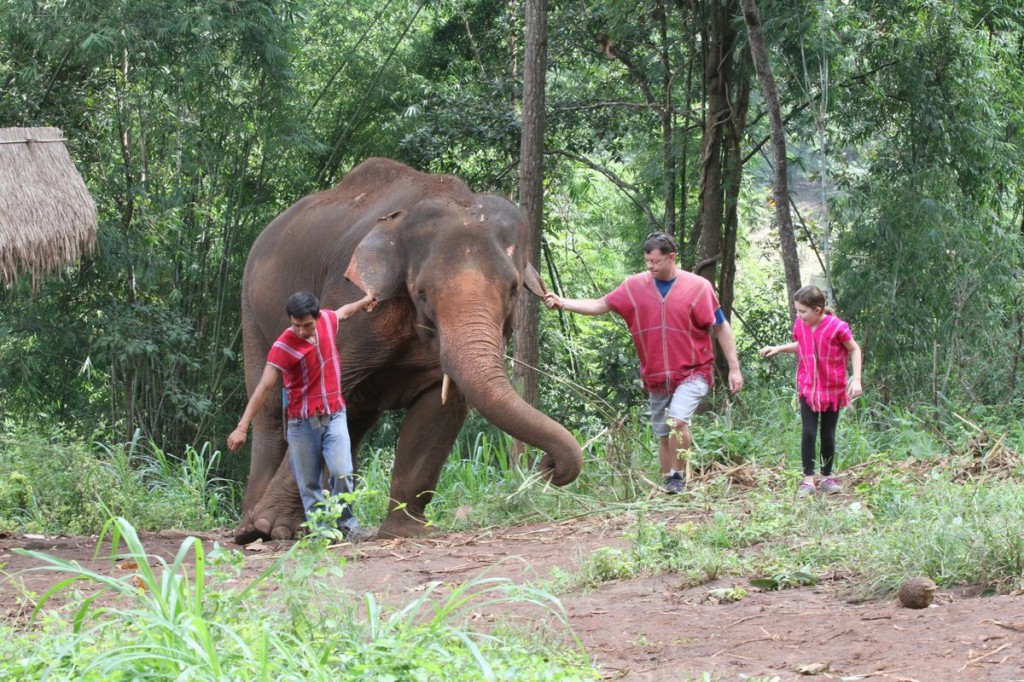 Taking MaeKwan for a walk 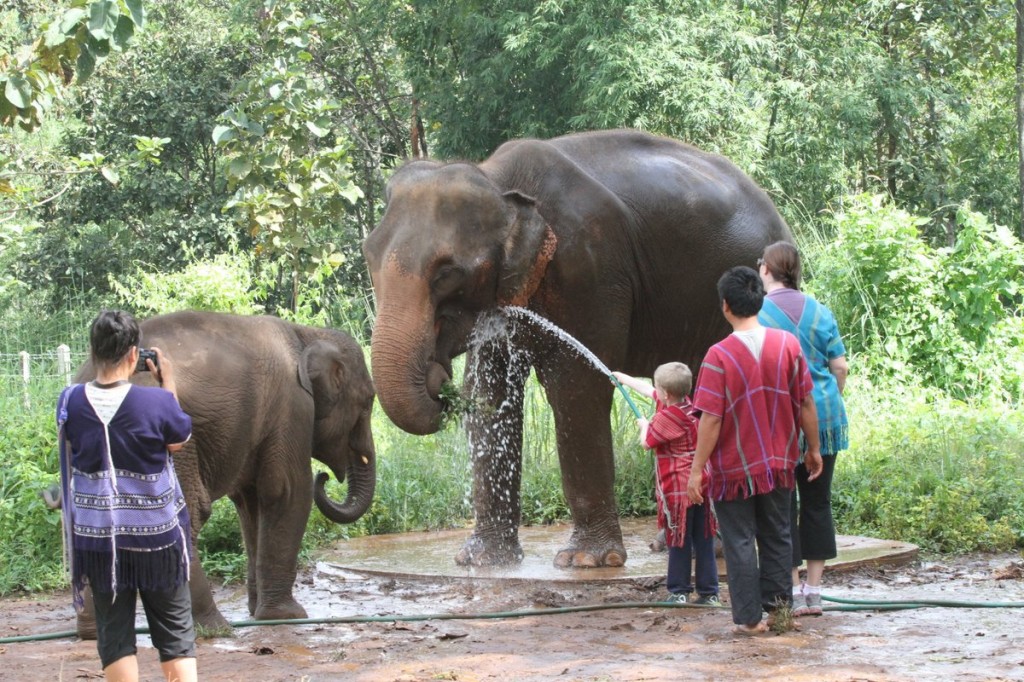 We rode them for 45 minutes out of camp, up a muddy, steep hill and down the other side.  Eventually we rode them along the road (what a treat for the drivers driving by) then down another muddy hill to the waterfall.  I have to say, riding an elephant is EXHAUSTING!  You’re trying to hold your legs up over its ears while balancing as its climbing up and down (and ripping various plants out of the ground to eat while its walking) all while holding onto a rope behind your body.

It was made tougher because I had Beckett in front sitting on the elephant’s head and he was holding onto my legs and nothing else.  If the elephant dipped her head and he wasn’t holding onto me well, he would’ve slid down her trunk like a giant slide.  So I’m holding on for dear life to him in front and the rope behind so we both didn’t fall off.  After a while my legs started to tremble so I had to shift position which made it easier to maintain my balance.

Despite all this, at one point the elephant dipped to the side and turned its head which caused me to start to fall off sideways.  A quick yell for help and the mahout came to my rescue and hoisted me back on top.

Once we were almost to the waterfall, Beck got off and walked because he was too tired of holding onto me.  It was MUCH easier to ride after he got off, however, everyone seemed so worn out when we arrived at the camp!

Despite all that, it was such a cool experience.  The scenery we went thru was gorgeous and the elephants can handle hills and mud much better than I can. 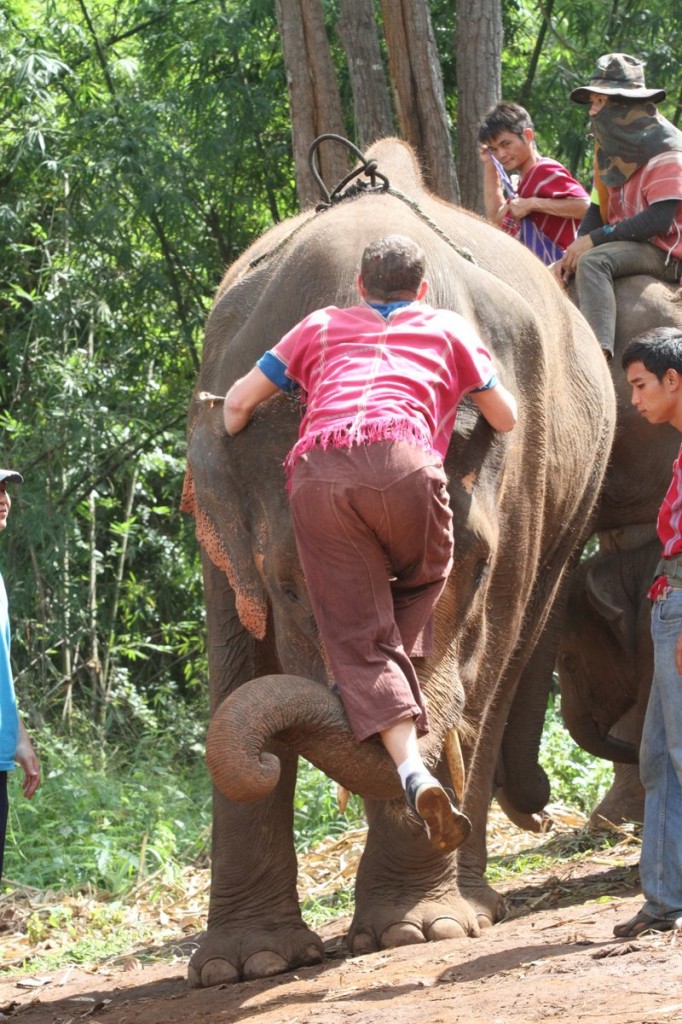 Chuck mounting MaeKwan via the trunk 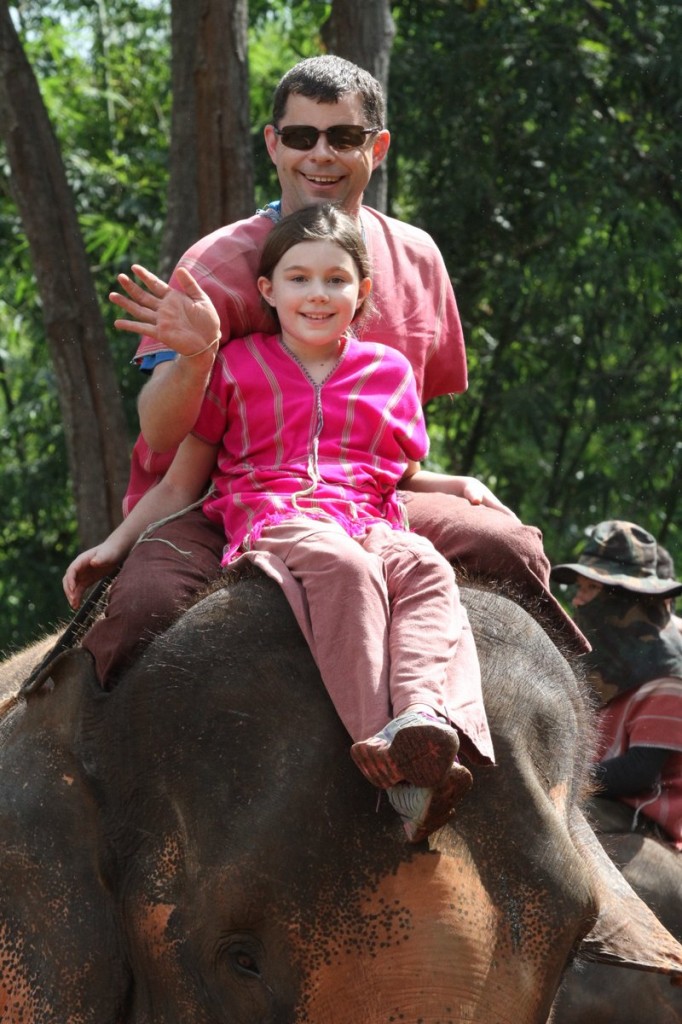 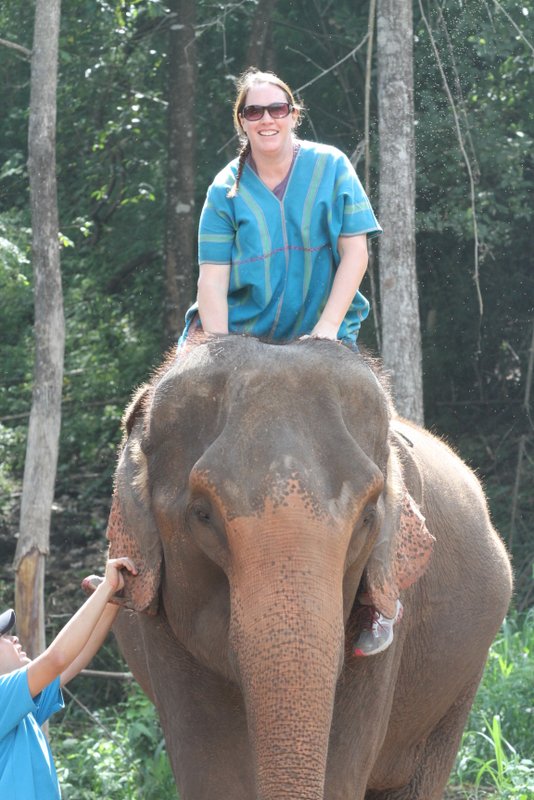 I’m on an elephant! 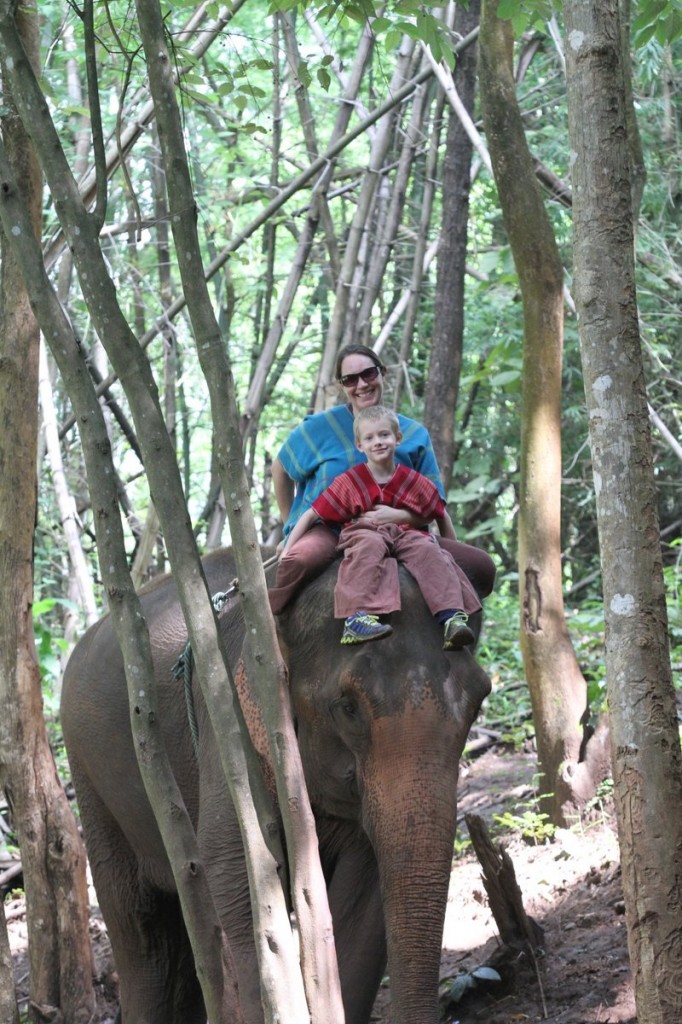 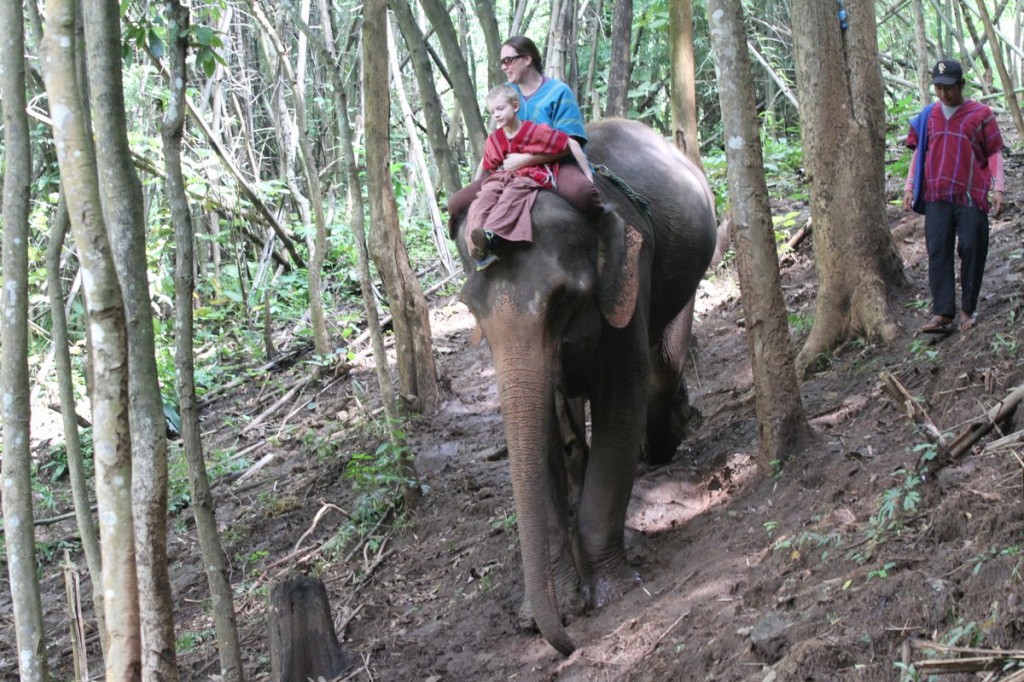 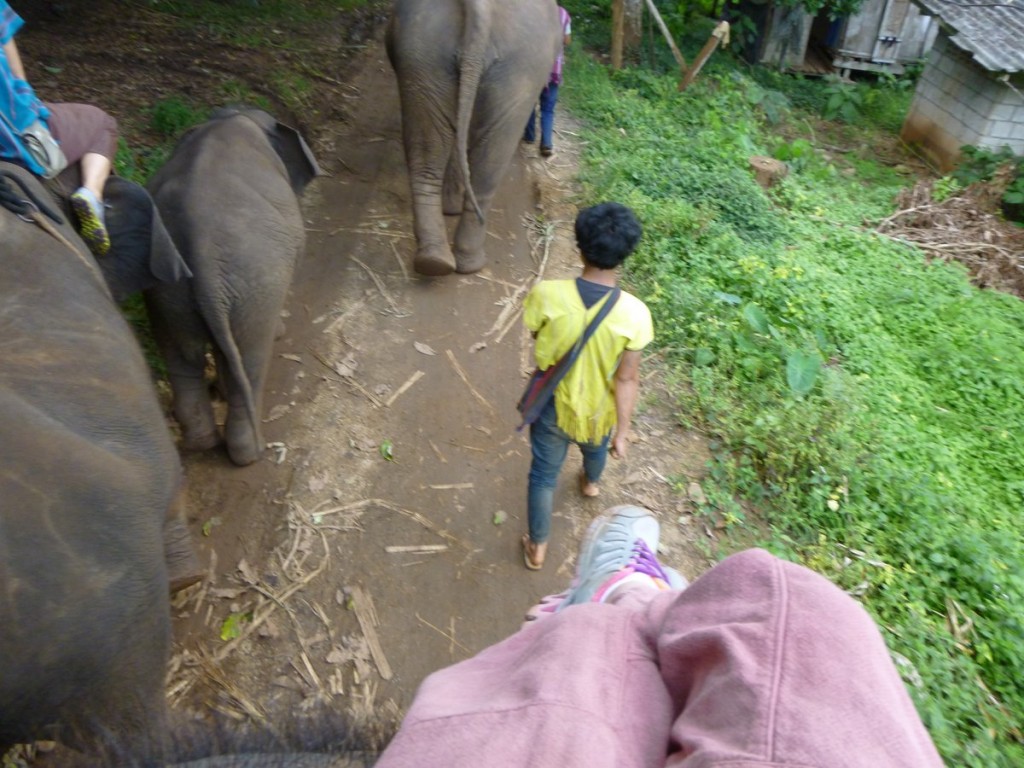 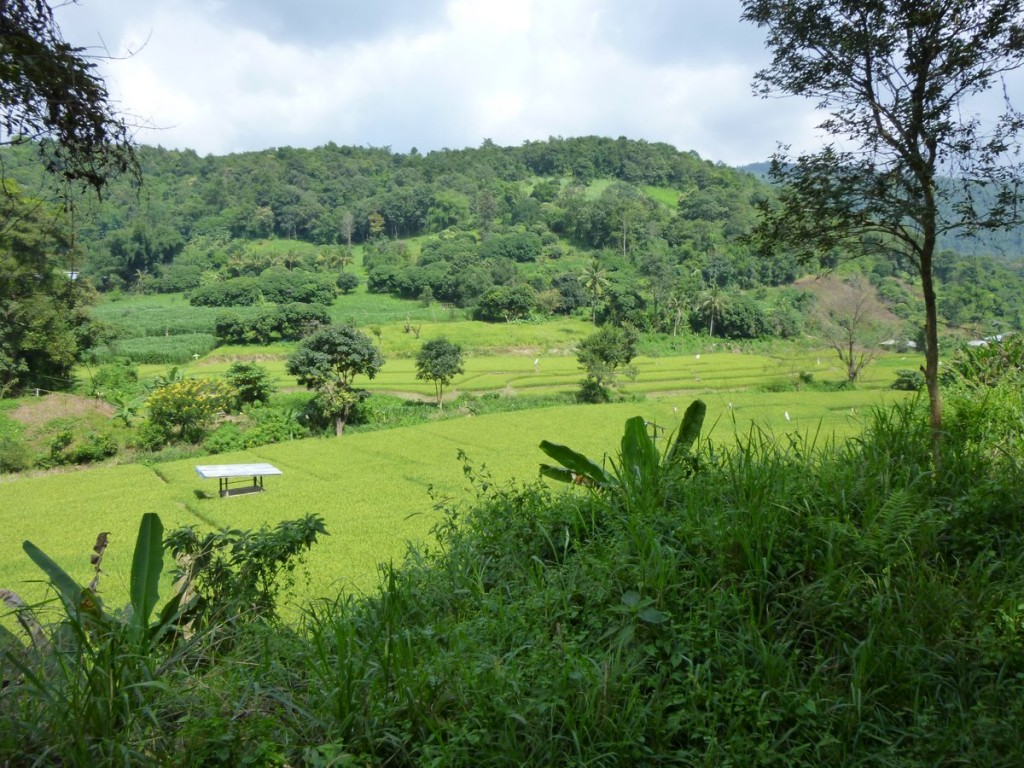 Luckily when we arrived at the waterfall it was time for lunch.  I gorged myself on fried chicken, coconut and other yummy things. 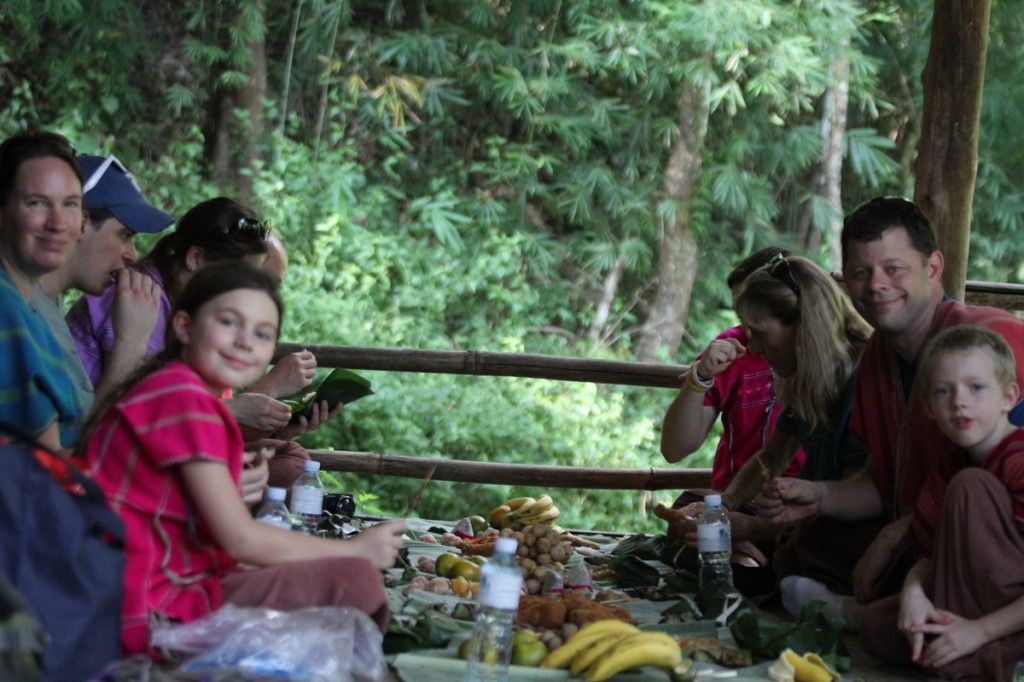 After lunch, we changed into our bathing suits and bathed the elephants in the water.  The elephants seemed to love being in the water and were lounging around as we scrubbed them down. 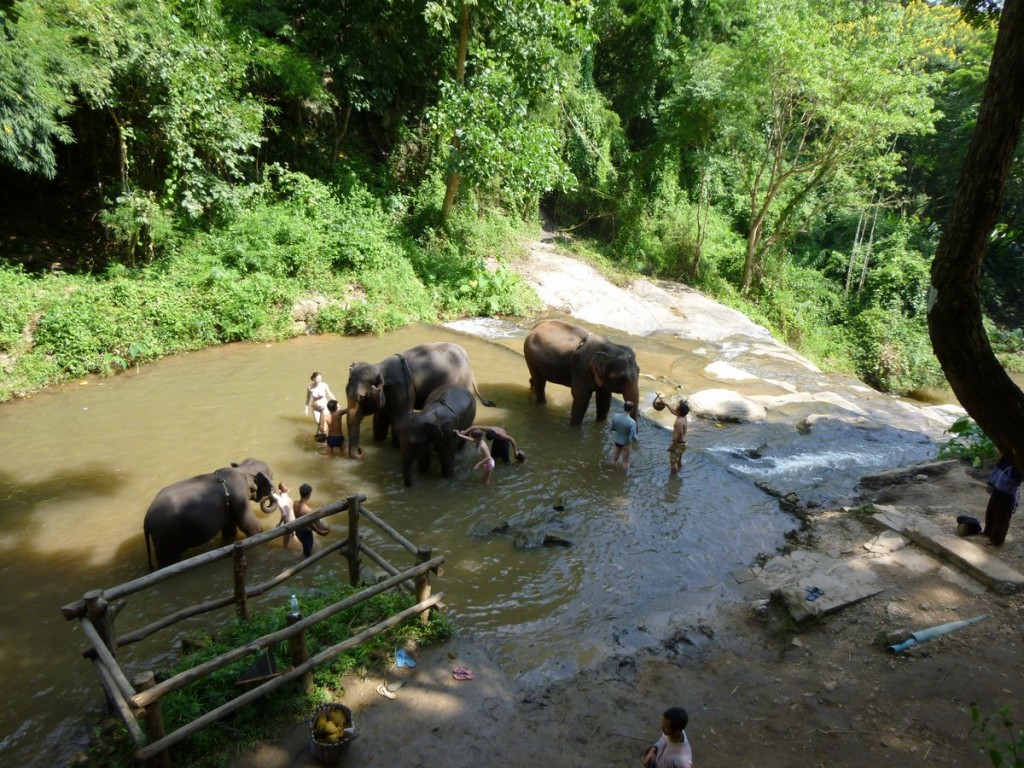 Scrub a dub dub, 8 elephants in a tub 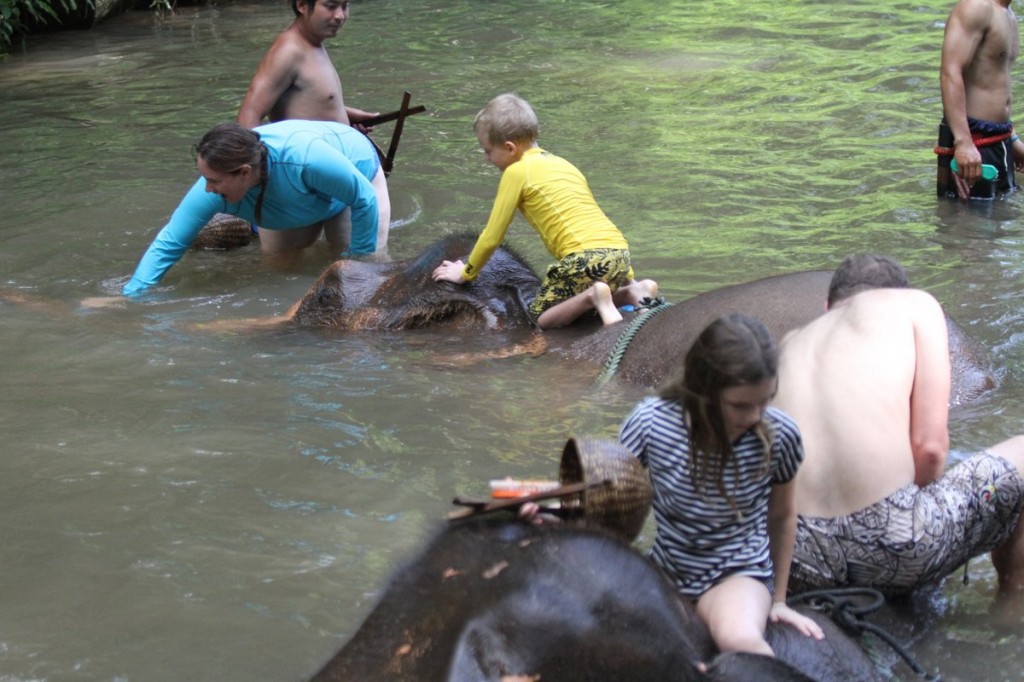 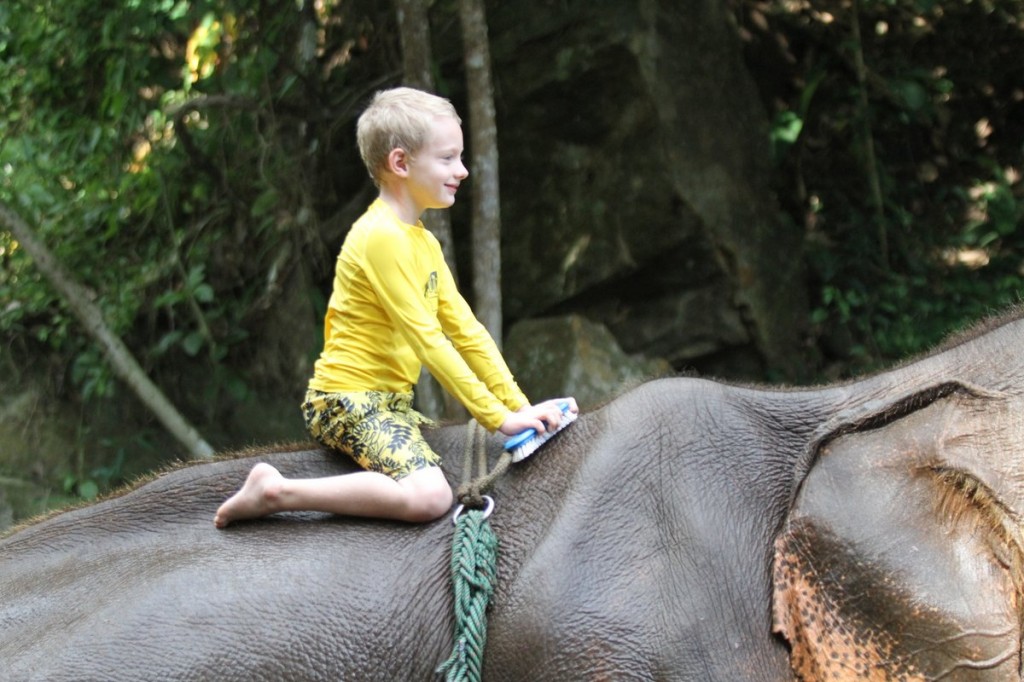 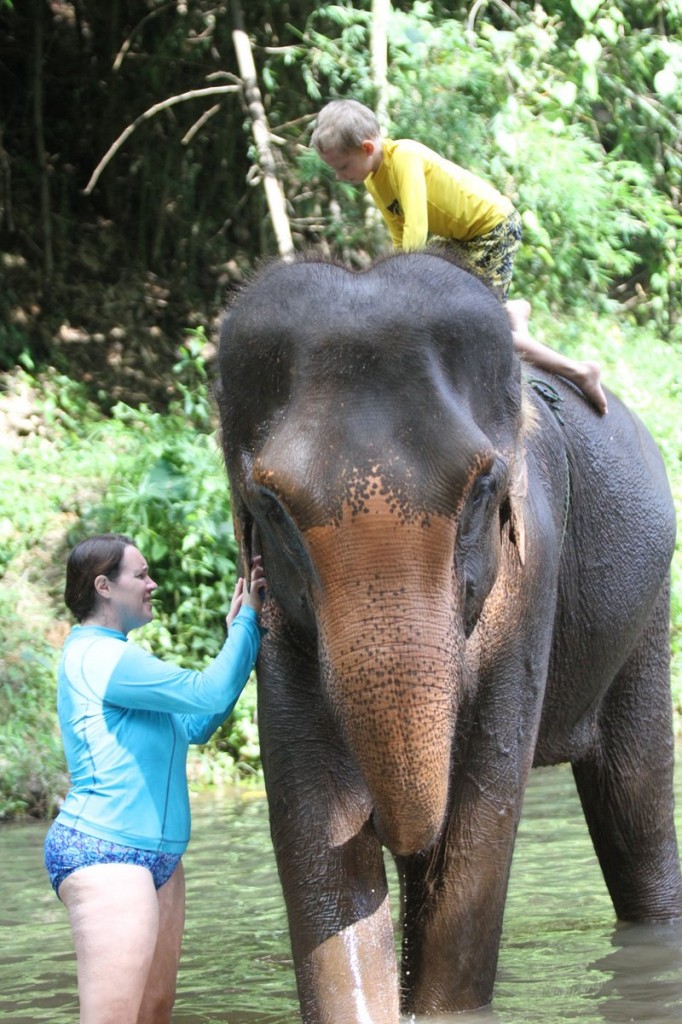 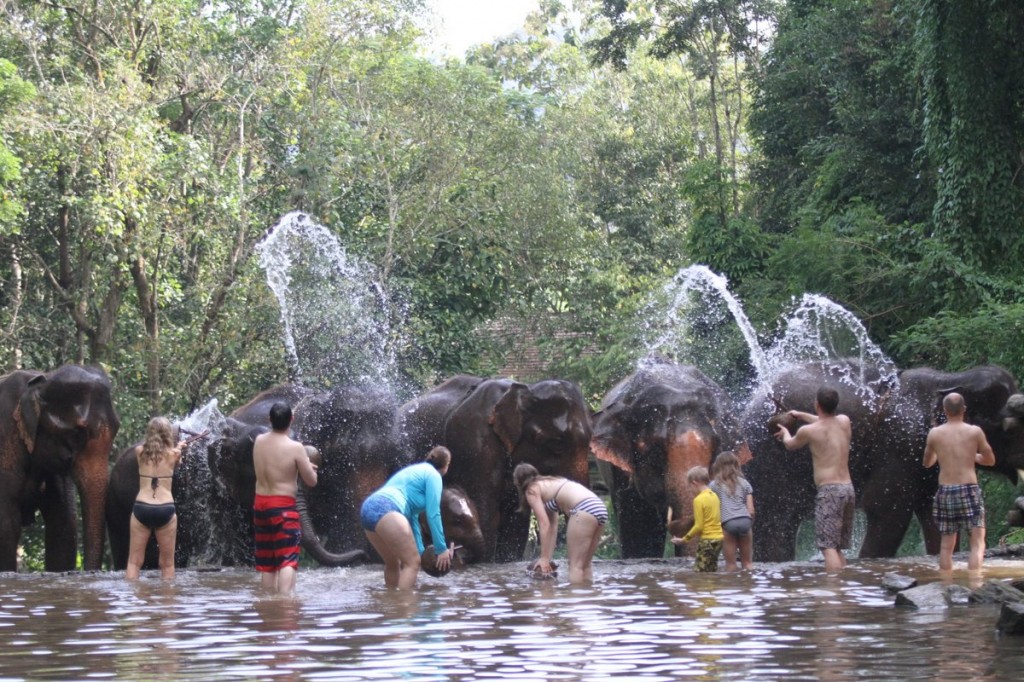 Then it was time for some group photos where we got sprayed by the elephants.  I must say that I loved this part! 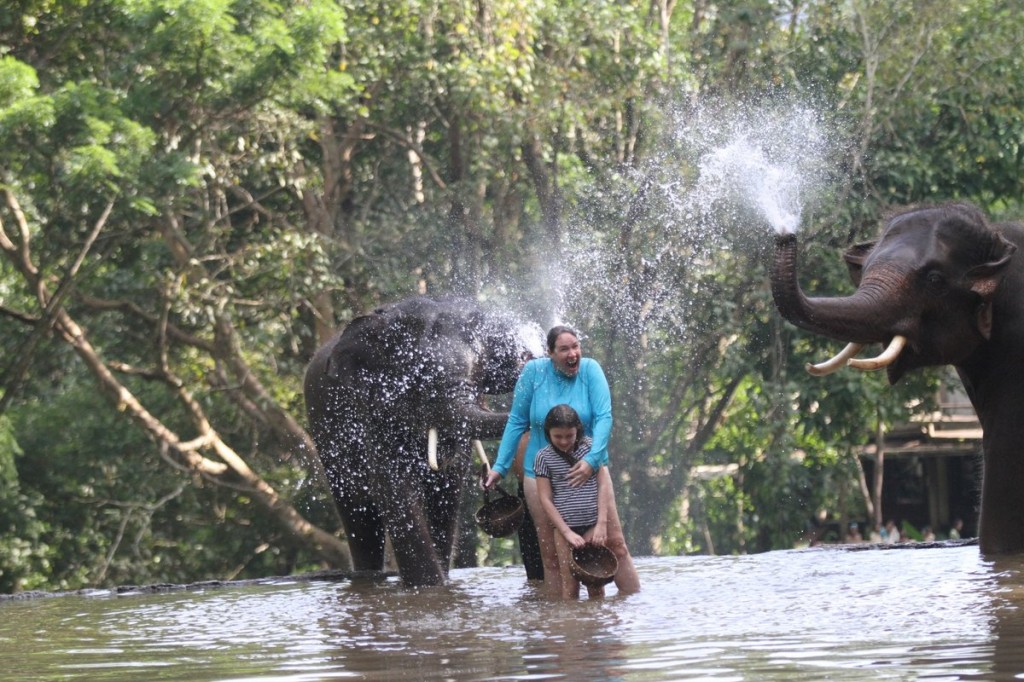 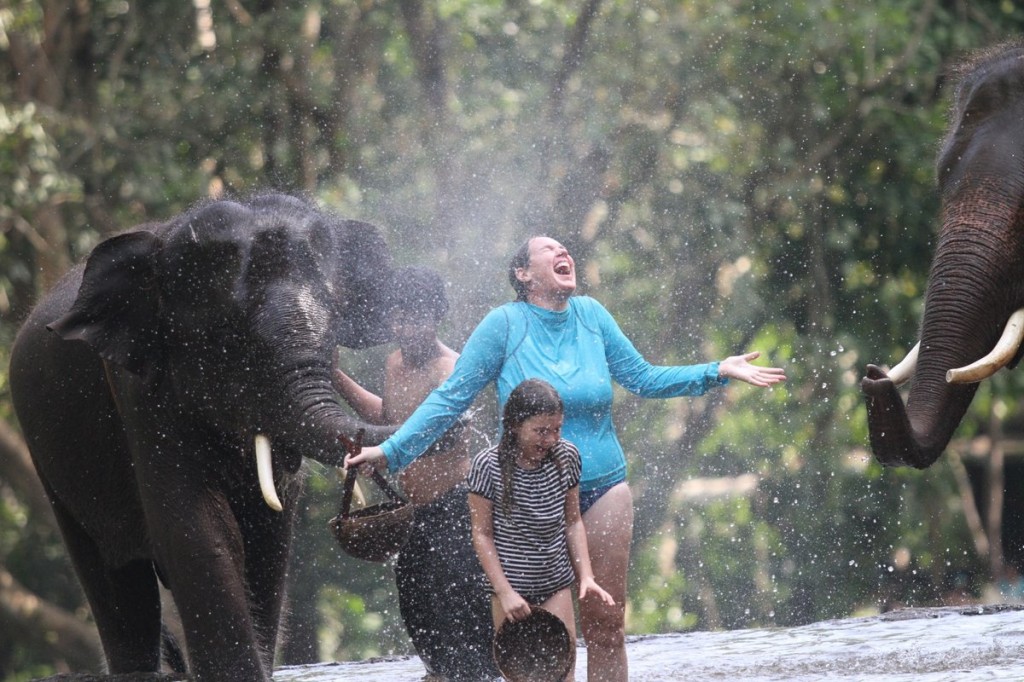 One of the highlights of the day for me

Sadly, our day with the elephants came to a close and after a brief final ride, it was time to say goodbye.  As a parent, this part was heartbreaking to watch.  Mara refused to take off her mahout clothes, kept hugging MaeKwan and kept saying she wouldn’t leave.  Beckett then gave MaeBonChon a goodbye pat and burst into tears.  Both kids had to be led away and Chuck had to carry Beckett and put him in the car.  He proceeded to sob the entire ride home. 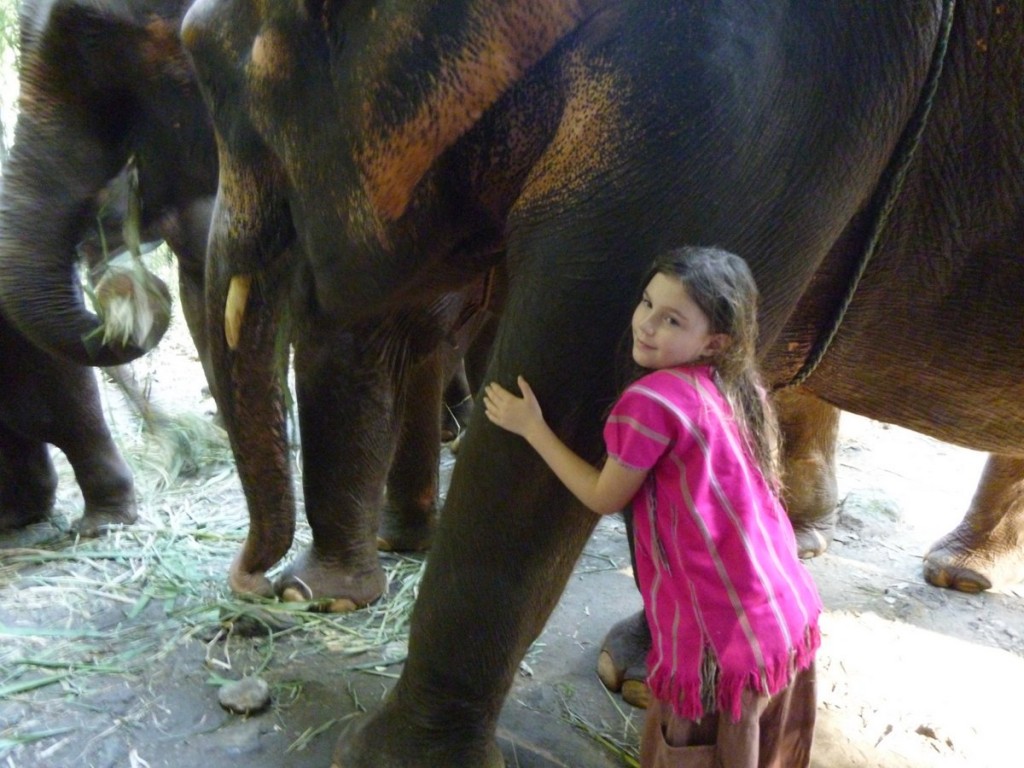 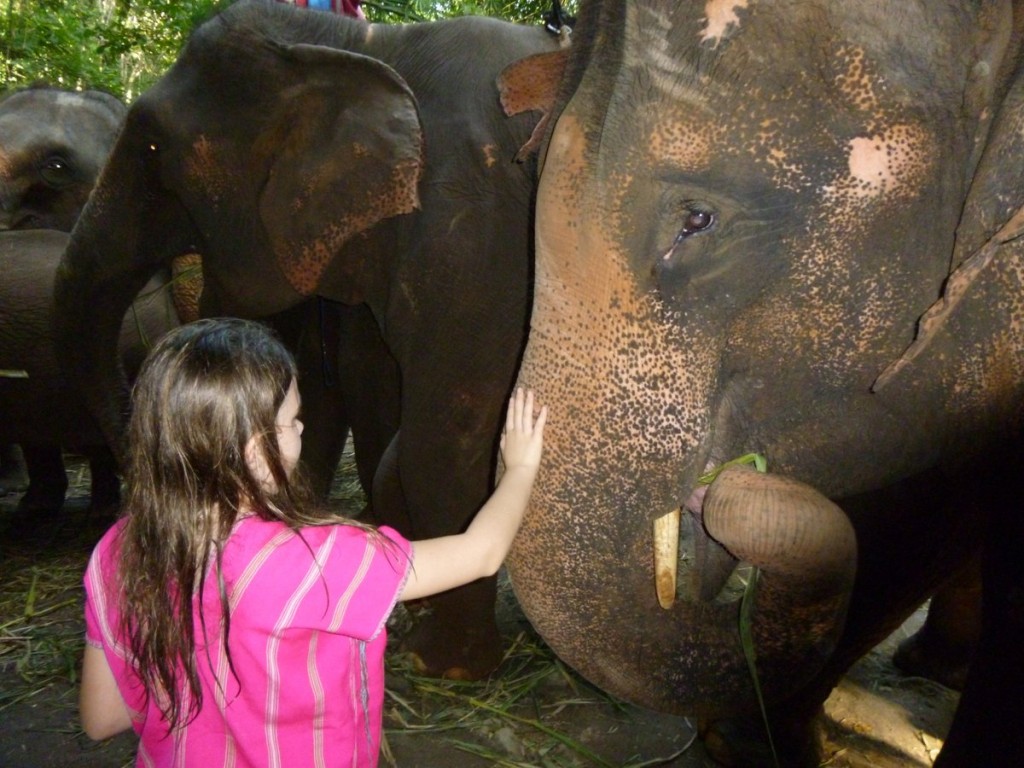 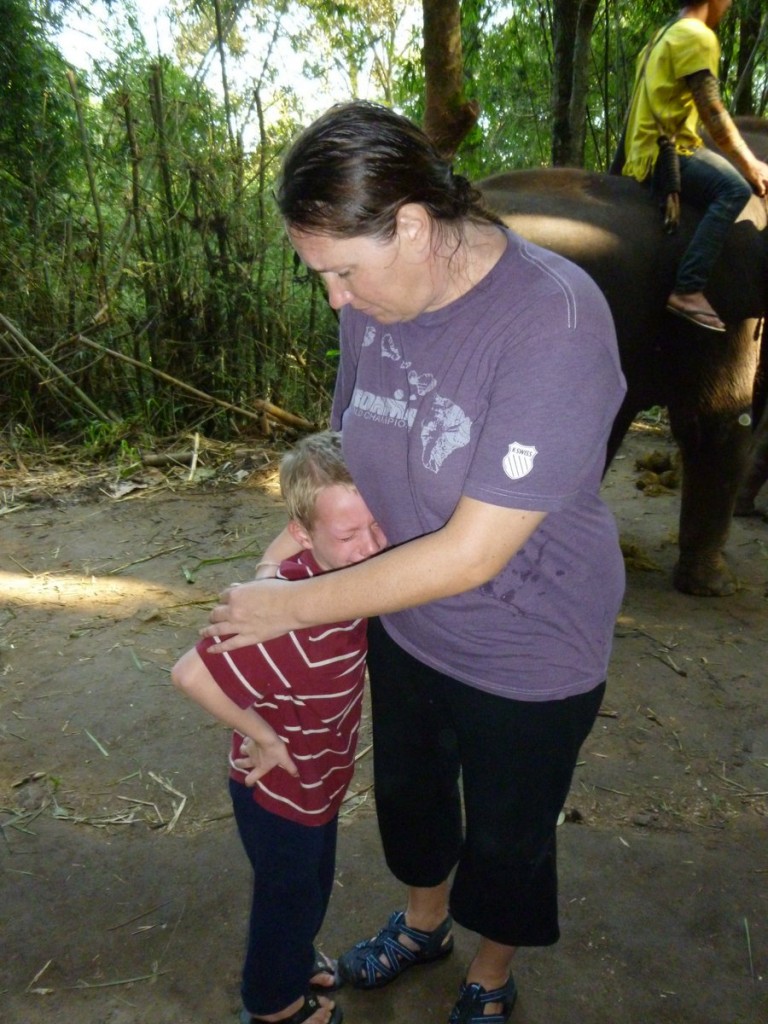 To say that this experience had a big impact on them is an understatement.  We didn’t just see elephants like you do in a zoo or feed them in passing.  We got to know them a bit, earned their trust and spent a day helping these gentle creatures.

Mara said her favorite animal is now an elephant and I hope that she carries a little piece of this experience and her love of animals for the rest of her life.

Logistics: Patara Elephant Farm has earned its ranking as the #1 activity in Chiang Mai on TripAdvisor.  The work they’re doing is awesome and if you’re ever looking to support an animal charity, please support them.  Its a very pricey day out but money well spent.

The normal price for this program is 5,800 Baht per person ($190).  However I read a blog post elsewhere about a a cheaper option (4,200 Baht pp) where 2 people share 1 elephant instead of everyone getting their own.  I doubt adults can do this (each adult needs their own) but if you have young kids, this is the way to go.  I’m kind of glad each kid didn’t have their own elephant as I think they got more out of it by sharing one with mom or dad.

I’m also so happy our kids were old enough to enjoy this activity (Beck is 7 and Mara is nearly 9).  I actually wouldn’t take kids much younger than this although I know some do and have a great day.

– I’d recommend wearing light long pants.  They do give you mahout clothes to put over your clothes but I wore capris and their pants were short on me (darn long legs 🙂 ) and I got chafed while riding the elephant.  If you’re petite, you should be fine, but if not, longer pants are probably better.  Chuck wore shorts and was fine though so long pants aren’t necessary.

– They take photos and videos all day (our CD had 981 photos from our whole group) so you really don’t need to bring your own.  They give it to you for free at the end of the day.

– Take or wear a bathing suit and bring a towel.  They move your bags for you while you’re riding the elephant and there are changing rooms at the waterfall so you can change there.  After bathing them, you have the chance to towel off and change back into regular clothes.  I had strap-on water shoes which were nice to have in the water (there are some rocks in there) but Chuck and the kids went in barefoot and were fine (flip flops in there isn’t a good idea).

– They provide water throughout, there is access to a bathroom except during the ride and you’re provided with a big lunch so no need to bring much unless you have allergies or need snacks frequently.

– Sunscreen and bug repellent is a good idea as well.