Chuck went to the meditation retreat the week before I did and had such a good experience that it seemed like I should go too.  So the following Tuesday, off I went.

At the beginning, you sit in room and learn about Buddhism and some basics on meditation and how the two go together.  The monk used some really great analogies in explaining things.  For example, when he explained the different types of Buddhism (Theravada, Mahayana, and Vajrayana) he said its like if you’re trying to go to Bangkok, you can go by bus, train or plane.  All will take you there a different way, but they all get you to Bangkok.

One of my favorite things he said (and frankly it was an epiphany) was when he asked what would happen if we didn’t shower for a week or a month.  Well, our bodies would get dirty and people wouldn’t want to be near us because we’d smell bad.  So what happens to our mind if we don’t “clean” it regularly?  Well it gets stressed and overwhelmed and chaotic.  Meditation is just a way of “cleaning” our mind and fits into taking care of your body.

As an American, its not acceptable to say you’re working on your mind.  It’s considered weird or that you must have mental issues or its seen as a sign of weakness.  But for Buddhists, meditation is just taking care of your mind on a daily basis.  It’s not a negative but a positive.  You clean your body, and you take care of your body by eating right and exercising (or at least knowing you should do those things) but we don’t take care of our minds!

For the first time ever, feeling stressed or being mentally exhausted was no longer a negative.  It was just a symptom of not caring for your mind just as a broken leg would be a sign to rest and take care of your body.

As an aside, you don’t have to be a Buddhist to meditate.  Anyone can meditate.  Meditation doesn’t have a religious bent to it so while the monk teaching us was Buddhist and we learned about Buddhism, he wasn’t converting us to Buddhism or changing any of our thoughts or beliefs.

After the 1:30 introduction, we road 45 minutes to the meditation retreat.  We paired up with someone else and had some time to change into our white clothes before we started the actual meditation practice.

We began by learning a walking meditation.  You begin by standing, arms clasped in front of you or behind you, eyes open and focusing on your breathing.  Then he’d repeat, slowly, “Standing” 3 times.  Then he’d say “Intending to walk”. Then he’d say “Right foot, touch” at which point you’d slowly move your right foot forward and touch it to the ground when he’d say “touch”.  Continue on for the left foot and you’re on your way.  It seems a little silly when you start (and reading it probably sounds pretty dumb) but its actually not.  You focus on your breathing and your walking which clears your mind.  I actually found the meditation like this to be the easiest because you can concentrate on your body and the feeling as your foot hits the ground.

We then learned the sitting meditation, standing meditation and even a lying meditation.  Over the 2 days, we practiced each type as a group but were also given lots of free time where we could practice whichever meditation we wanted.  We also practiced outside and were free to wander the grounds (silently) and practice wherever we felt comfortable. 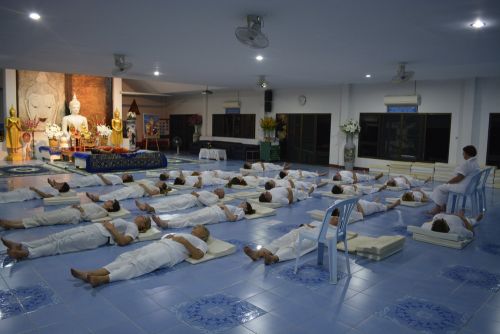 I found the first day the easiest.  I would start to meditate and focus on my breathing and whenever I noticed I was thinking about something else, I’d yank my focus back to my breathing.

The 2nd day started at 5 am and if you know me, you know I don’t do mornings well at all.  Surprisingly I did ok, at least at the beginning of the day. We started outside in the dark and did some meditation and even some yoga as the sun rose and lit the sky. 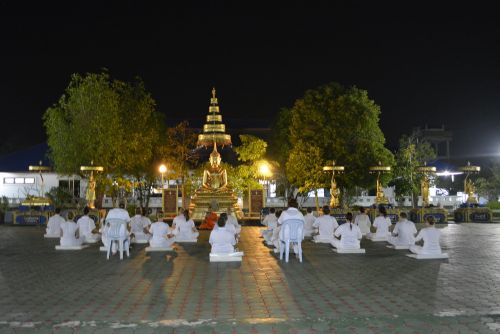 We then offered rice to the monk then had breakfast (Thai vegetable soup with rice and toast which was delicious.  I seriously need to start eating this soup for breakfast!).

All the meals were supposed to be eaten silently and Chuck’s group followed that direction.  However, some of the people there (there were 25 of us total) could not help themselves from talking despite being told repeatedly to eat in silence.  It was still much quieter than it would’ve been if talking was allowed.  All the meals were vegetarian and quite filling and seriously delicious!

We were given 1:30 to practice our meditation after breakfast and by this point my mind was exhausted.  I was too tired to yank my thoughts back and after about 1:15 of practice, I gave up and went to my room.

Next up was a discussion with the monk.  This turned out to be one of my favorite parts of the entire weekend.  We were allowed to ask the monk anything and everything and so we did.  I also found out that others felt exactly as I did: the walking meditation was the easiest and we all did better the first day but did horribly on the 2nd day.

Then he said something that changed it all for me: The goal is not trying to have no thoughts, the goal is to notice the thought you are having, acknowledge the thought, let it pass and return to focusing on your breathing.  So instead of yanking my thoughts back to my breathing everytime they strayed, I started saying “I’m thinking about X” and then guided my thoughts back to my breath or gave the thought time to float away.  It became a much more fluid thought process and was a lot less exhausting.  No longer was I concentrating so hard at not thinking but just noticing and being mindful. 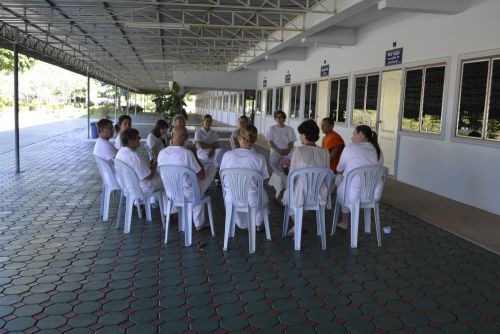 After a lunch of potato curry eaten in not even close to silence, I went to find the monk to ask more questions.  Since we’ve been in Thailand for so long, I’ve noticed a lot of things around me or in wats or in the culture but I didn’t understand them.  I sat by the monk and started asking him everything from why I see one Buddha image for each day of the week at the wats but an extra one for Wednesday Night, can my family give alms to the monks in the morning and if so, how/when/where/what.

Most of the group came and sat behind me and listened in.  It was such a great experience – I know and understand so much more about Buddhism and even the Thai culture and understand more about what is happening around me.  Buddhism plays a MAJOR role in the daily lives of the Thai people so you see these things everywhere and all around.

I also learned that meditation can be adapted to your personal life.  Maybe sitting on the floor doesn’t work for you but sitting in a comfy chair does.  Or maybe you want to informally meditate doing a different activity.  Its all good.

In the last sessions, I actually meditated the best and had some epiphanies about some things which are too personal to share here.

Eventually the day came to a close and we all headed back to Wat Suan Dok and I was happily greeted by my kids. 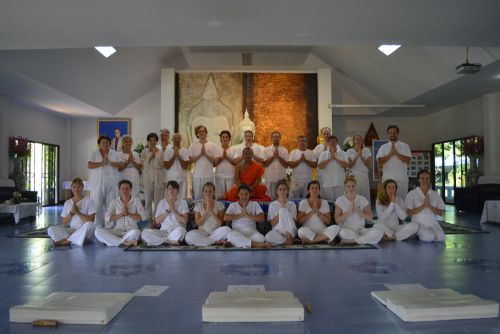 Its too early to say (only 24 hours later) if this was a life changing experience for me or just a really cool experience.  I’m not sure I’m going to formally meditate every day but I do plan to informally meditate more often.  I also have a new perspective on some things and some things I viewed negatively I can see positively now.  I realized that I need to take more time for myself, take better care of my body and my mind and be kinder to myself.  And needing that time isn’t because I’m weak but because my body and mind deserve to be treated better.

If you’re in Chiang Mai and want to do the retreat, more information can be found on the Monk Chat site.  The 2 day/1 night course is 500Baht (about $16USD).  You can purchase a t-shirt and white pants for 150Baht each ($5USD each) when you arrive.

Bring your toiletries, a towel, toilet paper, hand soap and, of course, your white clothes and an open mind.  Water is provided whenever you want it however a water bottle is nice to have so you can fill it and have water in your room.

Warning: On the morning of the 2nd day you’ll do yoga.  He asked if anyone ever did yoga so I raised my hand and next thing I  knew I was standing in front of everyone and being asked to lead the class.  I was so confused at first that he called someone else forward and they led the class thru a yoga session.  SO, if you don’t want to teach, don’t raise your hand!

To make a reservation, email thaimonkchat@yahoo.com or you can call or stop by in person.