While my mom was visiting, we decided to take a cooking class.  We went with the Red Chili Cooking School which had nothing but 5 star ratings on TripAdvisor.  The instructor Aon was awesome and deserves every 5 star rating.

He has a different set menu for each day of the week and I picked Thursday because we’d be learning to make a couple of our favorite Thai dishes – Pad See Ew and Massaman Curry.

He picked us up around 9am and we headed to a locals market where he explained what different vegetables and foods were and what they were used for.  I knew most of them since I’d been here for 4 months and we had similar items in Hawaii, however, I still found it educational and learned some things.

He then bought fresh items for our class that day and we took a songtaew to his home where he has a great outdoor kitchen/cooking area.

First up was making Tom Kha Gai (Coconut soup with chicken).  We would first assemble our ingredients, then he’d show us how to cook it all at his station.  Next it was our turn to cook our own bowl and we could customize the sweetness and spiciness as we wanted.  He then showed us how to garnish the dish to make it expensive looking.

It wasn’t something I thought I’d ever order, but I loved the soup.  It was so complex.  Sour, sweet, kick of spice.  The flavors kept changing and it tasted so Thai.  Yum.  And the fact that I’d just cooked it myself was the icing on the cake! 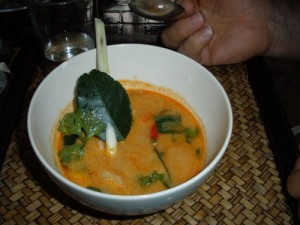 Next up was Pad See Ew (Stir fried wide rice noodle with black soy sauce).  He taught us how to make sure the noodles didn’t stick together and what we could substitute back home if we couldn’t find certain ingredients.  Overall this was a pretty easy dish to make and since it’s my kids’ favorite, I can definitely see making this one at home.  It also made me wish Chuck had come along so he could cook it too.  Super yum! 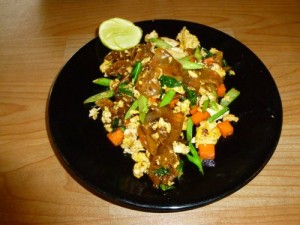 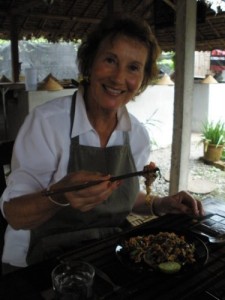 After devouring my plate, we moved on to making Massaman Curry paste.  Wow.  This takes a lot of work.  First off, there are probably 20 different ingredients that go into making the paste and there is much smashing and cutting before you wear yourself out with the mortar and pestle smashing it into a paste.  Everything went into this from star anise to toasted clove to lemongrass to garlic, cinnamon and shallots and lots of other things from those spice collections that you never actually get to use.  After much pounding (and some help from Aon), we had beautiful, thick paste. 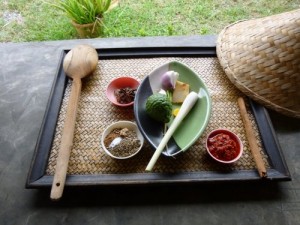 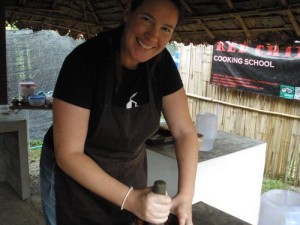 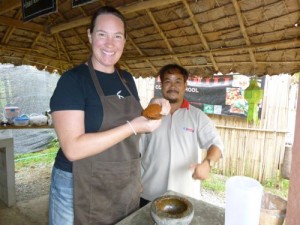 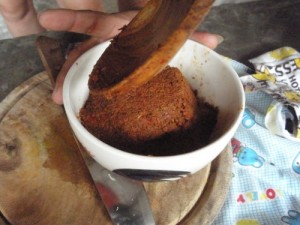 AFTER all of that work, then we could begin to cook the dish.  First you boil the paste in oil and then that is mixed with a whole host of ingredients from shallots, potatoes, chicken, coconut milk, palm sugar and more.  It boils for a while and then, finally, you have your Massaman curry.  Oh so much effort, but oh so good! 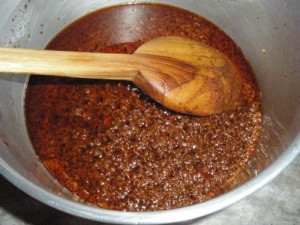 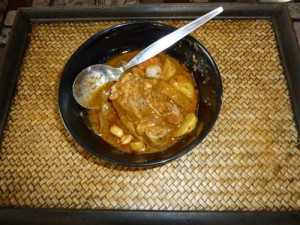 After that it was time to make spring rolls.  He actually started by making Pad Thai minus the noodles.  Then we used the Pad Thai ingredients as the filling for the spring rolls.  We rolled them up, fried them, let them cool and then bon appetit! 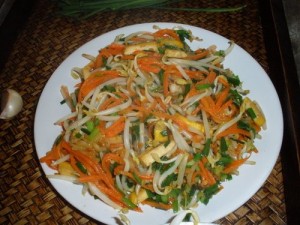 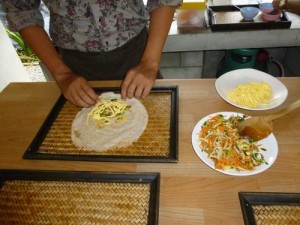 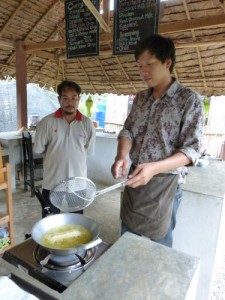 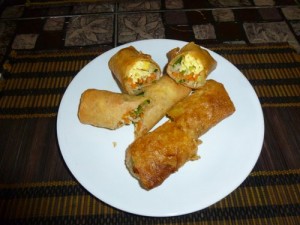 Finally, he showed us how to make Mango with Sticky Rice (Kaow Niew Mamaung).  First you steam the rice in a rice cooker.  While that cools, you make a coconut syrup of sorts using coconut milk, palm sugar and some Paladan(?) leaves.  Then you mix the two, let the rice absorb the syrup and you’re ready to eat once the mango is sliced. 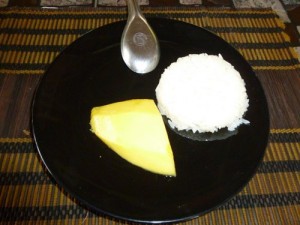 After the class, Aon drove us home.  We had so much food that we took it home and ate it for dinner that night.

It was such a great class that I almost want to send Chuck and then go back myself when he’s teaching how to make Penang Curry, Pad Thai and Khao Soy Gai. 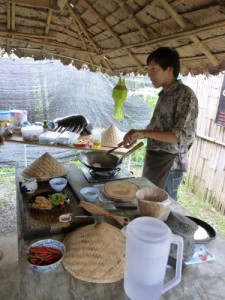 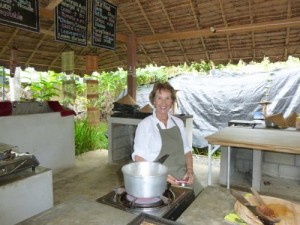 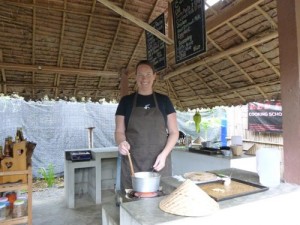 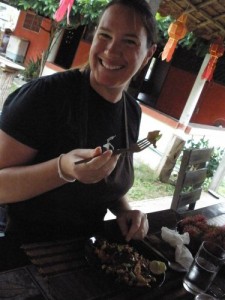