In early October, we did our second border run to the Myanmar border at Mae Sai, which is about 4 1/2 hours from Chiang Mai.  We drove up to Chiang Rai the first day, then planned to do our crossing on day 2, hit the Monkey & Fish Cave right afterward, then jet back to Chiang Mai.

Our border crossing was uneventful, but we spent way more time than we expected with the monkeys, putting us in a bit of a rush.  The mountains between Chiang Rai and Chiang Mai have a lot of twists and turns, and people drive CRAZY on them, so we didn’t want to go through them at night.

We’re jamming back towards Chaing Rai and all of the sudden the car loses power in the middle of the highway.  Luckily I was able to coast to the side and get out of the traffic lanes.  I tried restarting the car a couple times and had no luck.

Then we smelled gas, and bailed everyone out of the car, along with all our important stuff.

After a few minutes of gathering ourselves, I decide to go see if I can put the car into neutral and move it up a little bit to a better spot.  When I turned the ignition to free the gear shift, I could hear gas pouring out of the bottom of the car.  Again, I got out hastily and saw a wide pool of gas coming from underneath the car.

So there we are, about 30 minutes from the nearest city, and about 3 1/2 hours from home.  No phone, don’t speak Thai.  No clue what we’ll do about the car or what we’ll do that night.  Definitely an “awww, shit!” moment, but both Kirsten and I were fairly calm about it, for no good reason.

There was a building nearby with what looked like a small restaurant and store, and we figured we’d go in and call the company we rented the car from, then figure out housing.

I followed her over and sure enough, around the side of the building was a little shop for a guy who does auto repair!

I wandered back there on my own and tried to indicate that my car was broken down right outside.  He was pretty confused, but followed me partway out to the street.  The lady who sent us to him, then poked her head out of a window and told him what was going on.

He came out front, looked under the car, and found some part of the fuel line that had come off.  He then stuck it on, and had me drive back to his shop.  Seemed weird to start up the car while sitting in a puddle of gas, but hey, I lived to tell about it.

Meanwhile the lady from the shop had a couple friends there who came out and checked out the kids.  Many Thais love to touch our kids, especially Beckett with his blond hair.  They also brought out water for Kir and the kids so they could stay comfortable while waiting.

Back in the shop, he jacked it up, pulled another part off the car, then got some rusty wire and bound the whole assembly back together.  You hear the phrase about things being build with duct tape and baling wire – that was actually the case here.   Verrrry confidence-inspiring. 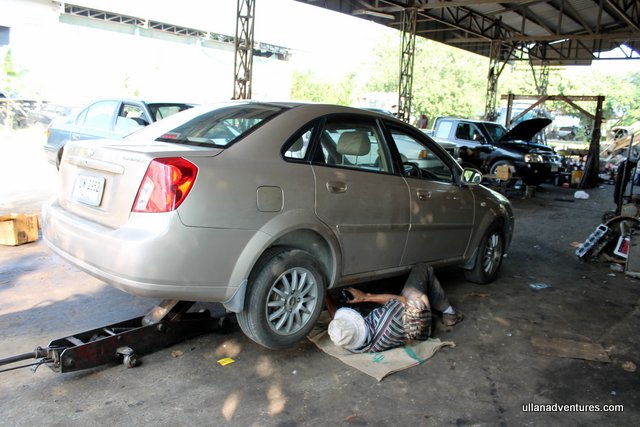 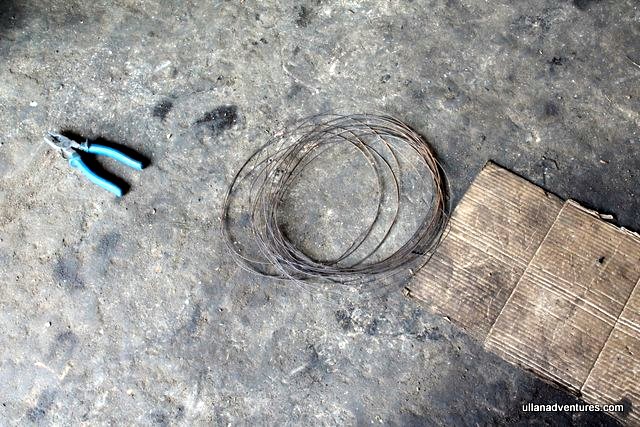 Here’s the part for my car. Just a coil of rusty wire. 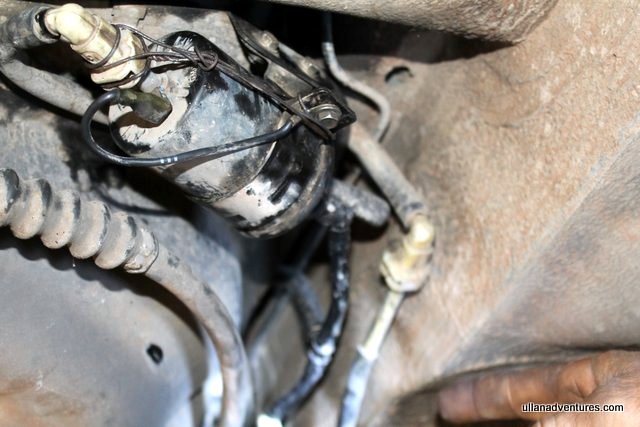 The final repair job. What could go wrong?!

So after about 30 minutes he puts the car down and indicates he’s done.  Someone else at his shop spoke limited English and indicated it was OK to drive to Chiang Mai as the car was, but that we should get it repaired there. 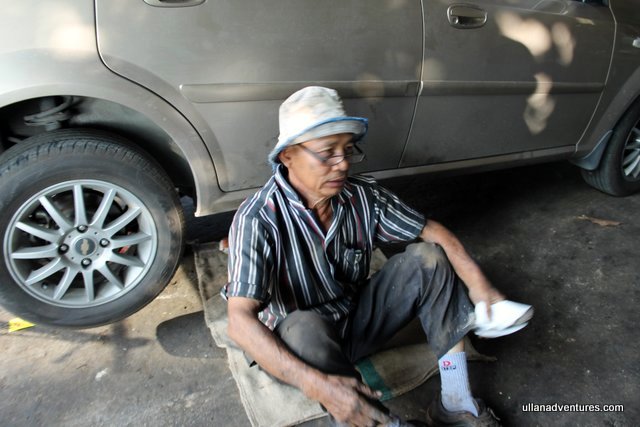 I’m figuring the fix is going to cost me $20-30.  Costly for Thailand, but damn reasonable for a man stuck in the middle of nowhere!  I gestured about “how much” to him and he shook his head.  He wouldn’t even take money for fixing me up.  Crazy!

I drove back out to the street, loaded up, and said goodbye to our new friends.

At this point, it was 4 pm and we were never going to make it back to Chiang Mai during daytime, plus now we have this gas leak repair of dubious integrity.

What to do?  Well, we decided to use the last of my Starpoints and go spend one more night at the Le Meridien in Chiang Rai, then drive back to Chaing Mai in the morning.  Took a little bit of funky logistics, but we got it all worked out.

So about 90 minutes after staring disaster in the face, we were poolside ordering cocktails and food from room service.   Can’t believe we were lucky to break down next to an auto shop, on a day he’s open, at a time he’s open, when he could handle us right away, with a car problem he could actually fix.   Once we  were forced from the car due to gas fumes, we knew we’d have some sort of story, but didn’t see this ending coming!

Here are a few shots of our stay at the Le Meridien Chiang Rai, which was far better than being stuck roadside! 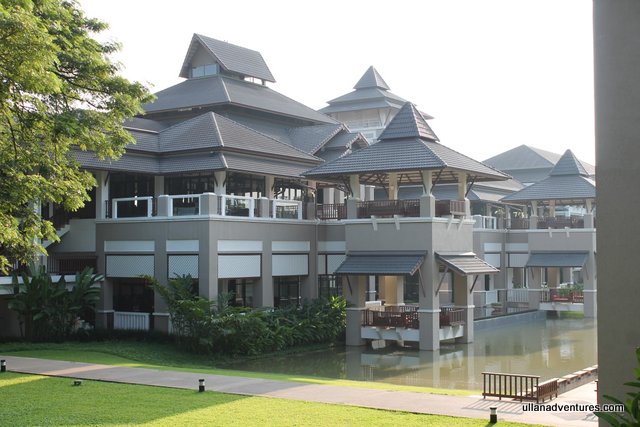 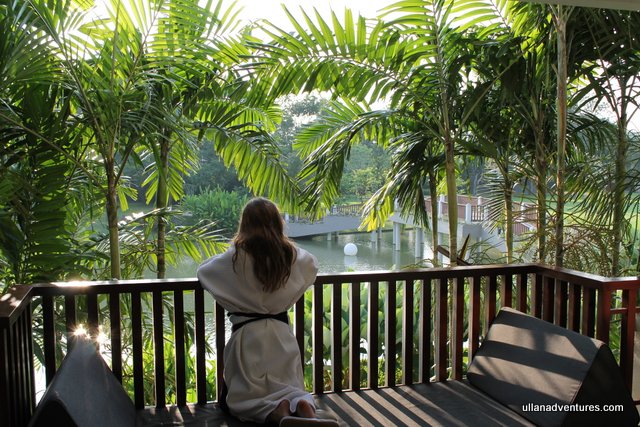 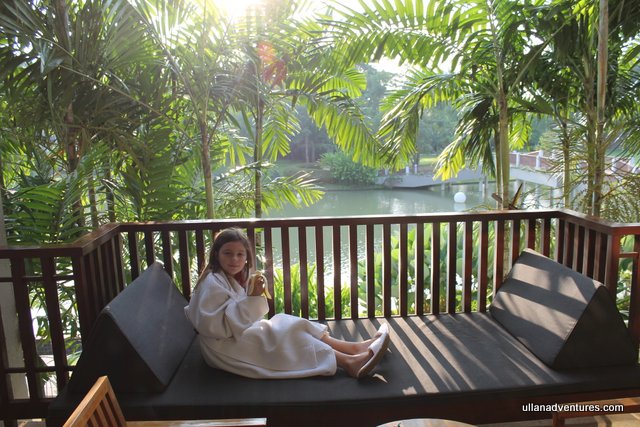