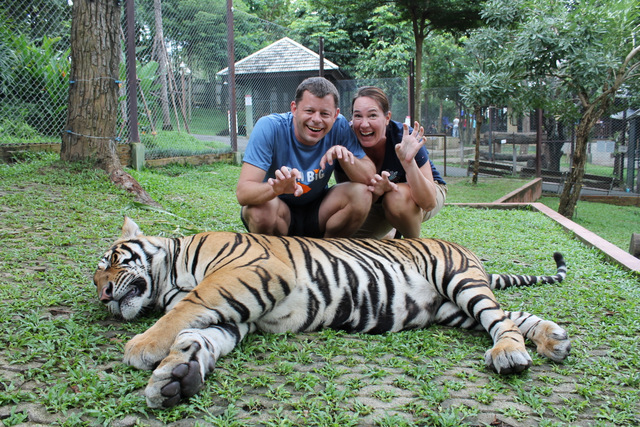 One of the must-do things on our list was to visit Tiger Kingdom.  When else do you get a chance to get up close to ginormous tigers?!?

I know what you’re thinking and I thought it too.  “They must drug the tigers.”  Upon researching articles and lots of comments about them, I came to the conclusion that they don’t or at least it doesn’t appear that they do. They say that the tigers are nocturnal, and that’s mostly why they’re mellow.

Despite feeling bad about exploiting animals, I was happy to see that the animals appeared healthy and alert.  And there were no chains or guns or ‘weapons’ used either.

So despite a few reservations, we decided to go there on my birthday.  It was such a treat!

Mara, Beckett and I were able to spend about 15 minutes in a cage with baby tigers.  OMG they are so cute and playful and I just wanted to stay and play and cuddle with them! 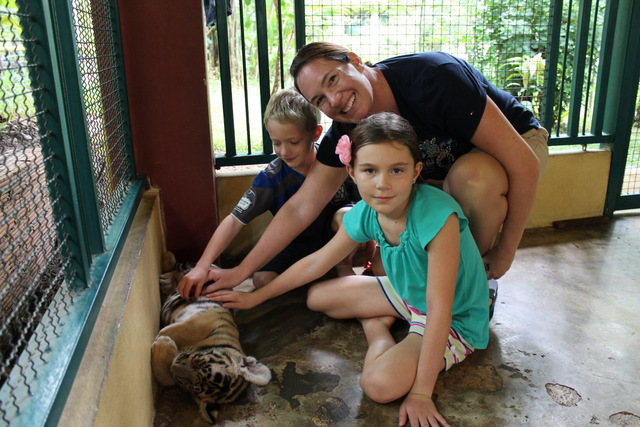 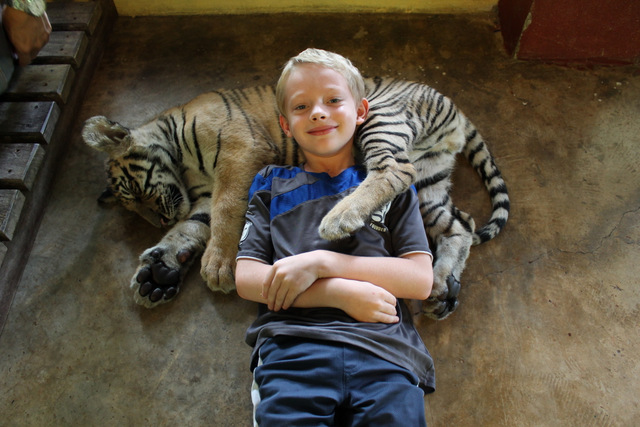 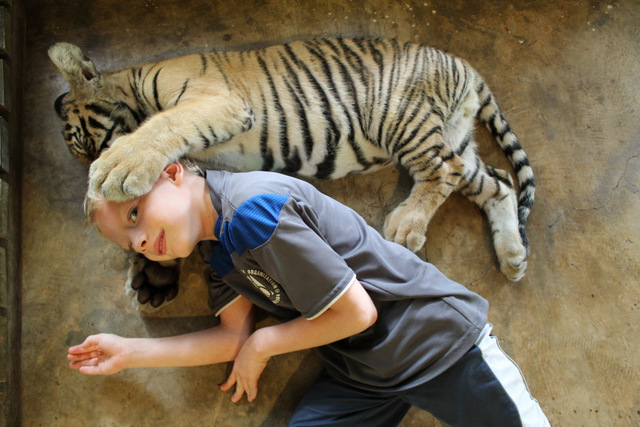 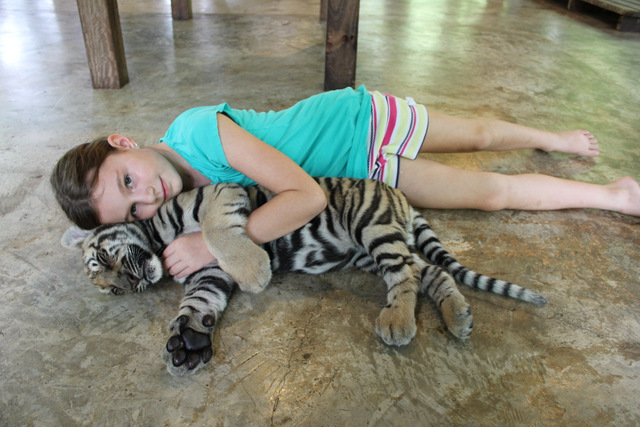 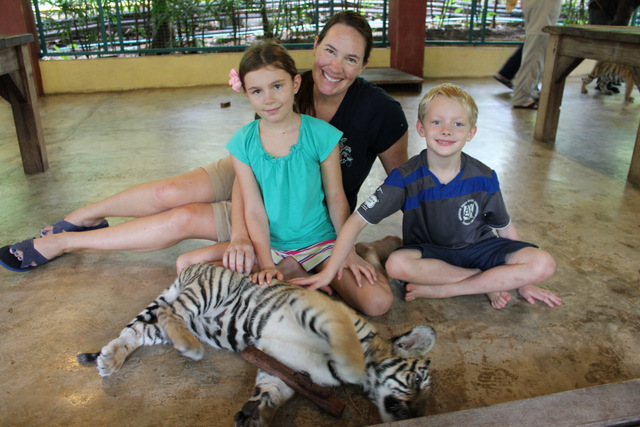 After that, Chuck and I went in the cage with the adult tigers.  The kids weren’t allowed in – too ‘bite sized’.

Holy smokes these are BIG tigers!  These guys could take me down in seconds.  It was awe-inspiring to be this close to wild creatures that could kill you so easily if they’d wanted to.  To see how big they were up close.  To feel how heavy and strong they are. 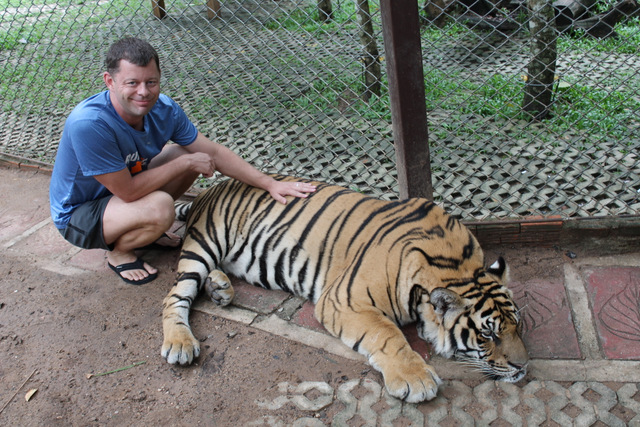 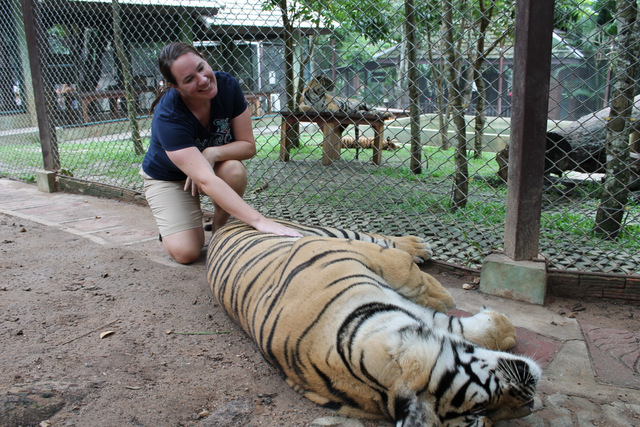 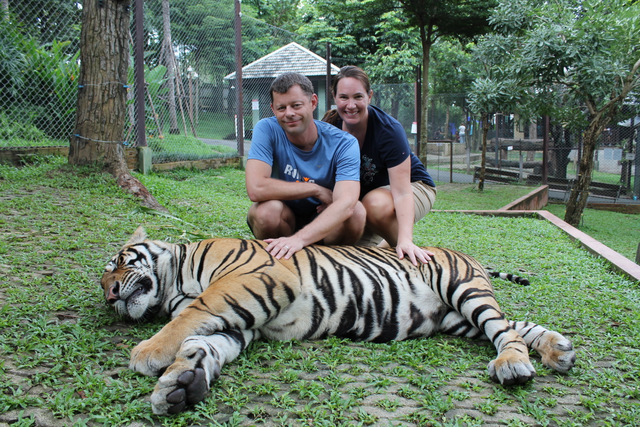 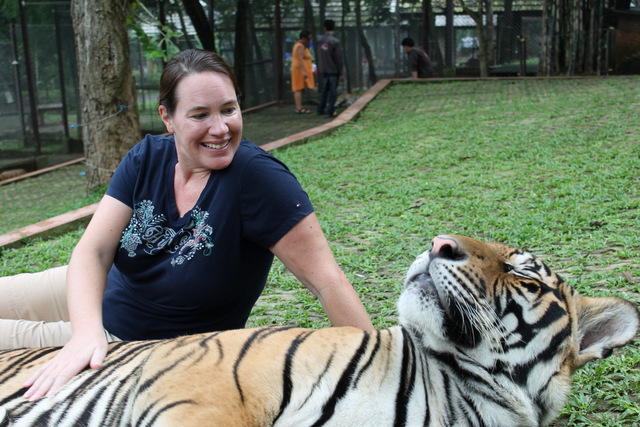 It’s a little hard to reconcile our feelings about the visit.   The tigers are clearly not in their natural habitat.  But it looks like they are well-cared for and there’s a breeding program going on.  It’s also such a big tourist attraction that it feels more like a factory than something like our visit to Pattara Elephant Farm.  We definitely felt bad for the tigers having a parade of people snuggle and move the tigers around while they’re trying to sleep.  I know I wouldn’t want 100 people handling me and taking pictures while I was sleeping.

After the visit, we talked to the kids about the feelings we had.  Excitement, guilt, and wondering about the overall good/bad of it.

It was definitely a huge thrill to go, even with the reservations I hold.  I can’t say I feel great about it, but it was an amazing experience to get so close to these magnificent cats.