Within the medina (old city) in Marrakech, Jamaa el Fna Square (hereafter, “the square”) is at the heart of the action.  This is what you picture when you think of Marrakech and is what you see in movies and TV shows.

It’s a huge open area, ringed by restaurants and shops.  During the day, it’s populated by snake charmers, henna ladies, monkey wranglers, and orange juice salesmen.  We didn’t take any pictures of the monkeys because it was really appalling how they were chained by the neck and dragged around.

We’d heard a lot about how aggressive the entertainers were and it was fairly true, but not a big deal if you’re prepared.  When you take your pictures with the snake people or others, whatever you offer, they’ll try to get 5 to 10x as much.  You just say no and ask if they want what you’re offering or nothing.  Then they’ll just back off, take it, and move on.

To some extent, they can sense who’s uncomfortable and will probably pressure you more if you are.  At the end of the day, you have the power because you have the money.  It’s not like you have any contract to give them a certain amount.  I gave the snake guys about 20 dirham ($2.50), but it’s not like there’s a posted price.  Just seemed reasonable to me.

In the late afternoon, the cobras and monkeys clear out, restaurant stalls set up, and the crowds build.  We visited the square several times during our 2 days in Marrakech and have stitched together a photo tour to give you an idea of what’s going on.

Here’s the snake charmers.  There were about 3 little setups like this in the square.  The guy standing up makes the noise you associate with snake charmers, but it’s really just to draw a crowd.  It has nothing to do with “charming” the cobra. 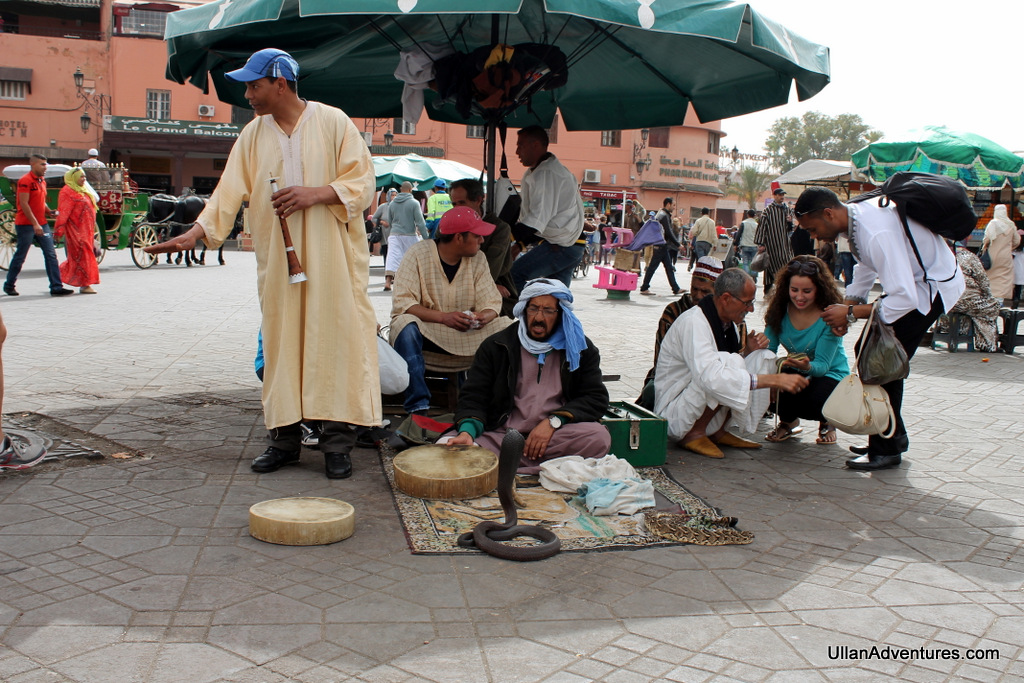 Step right up and see the cobra! 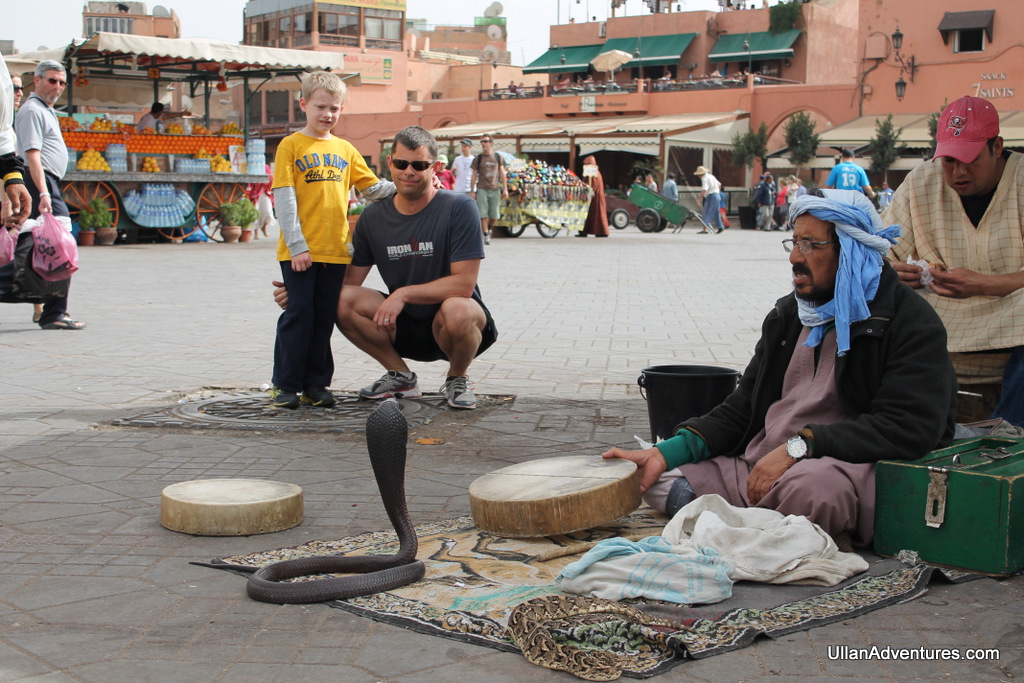 Beckett was fascinated by the cobras, but didn’t want to get too close. They’ll let you sit really close if you want to. 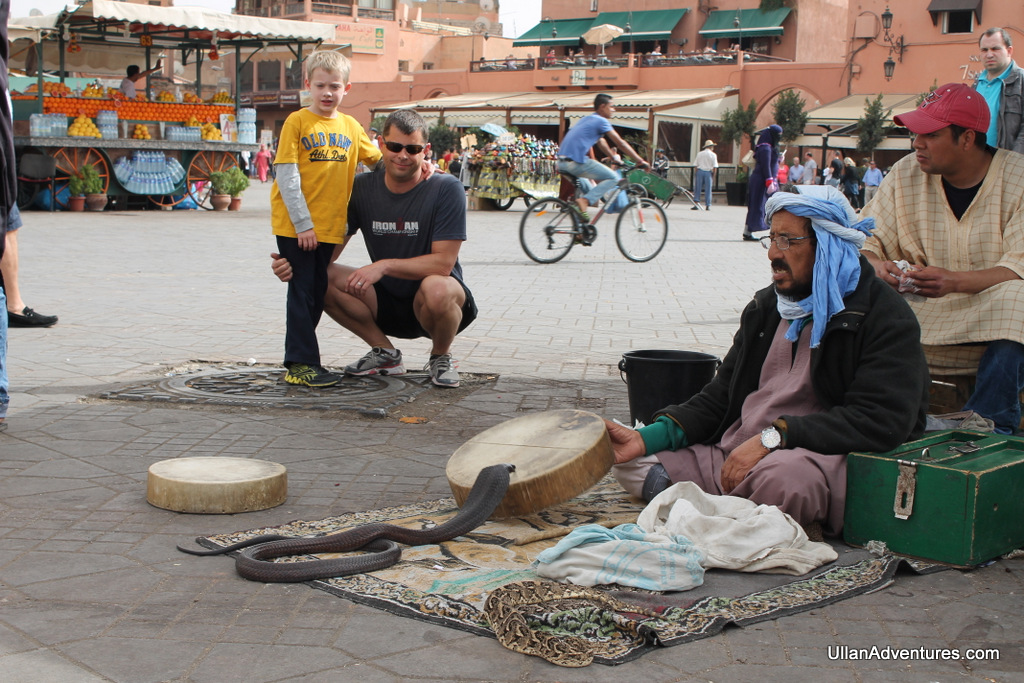 And who doesn’t want to wear a fez? 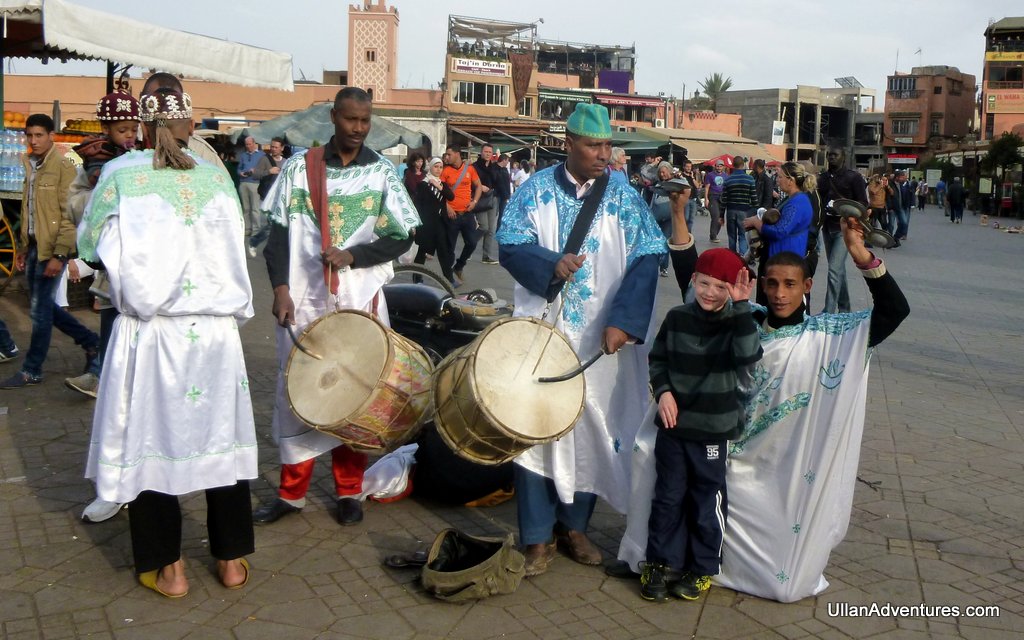 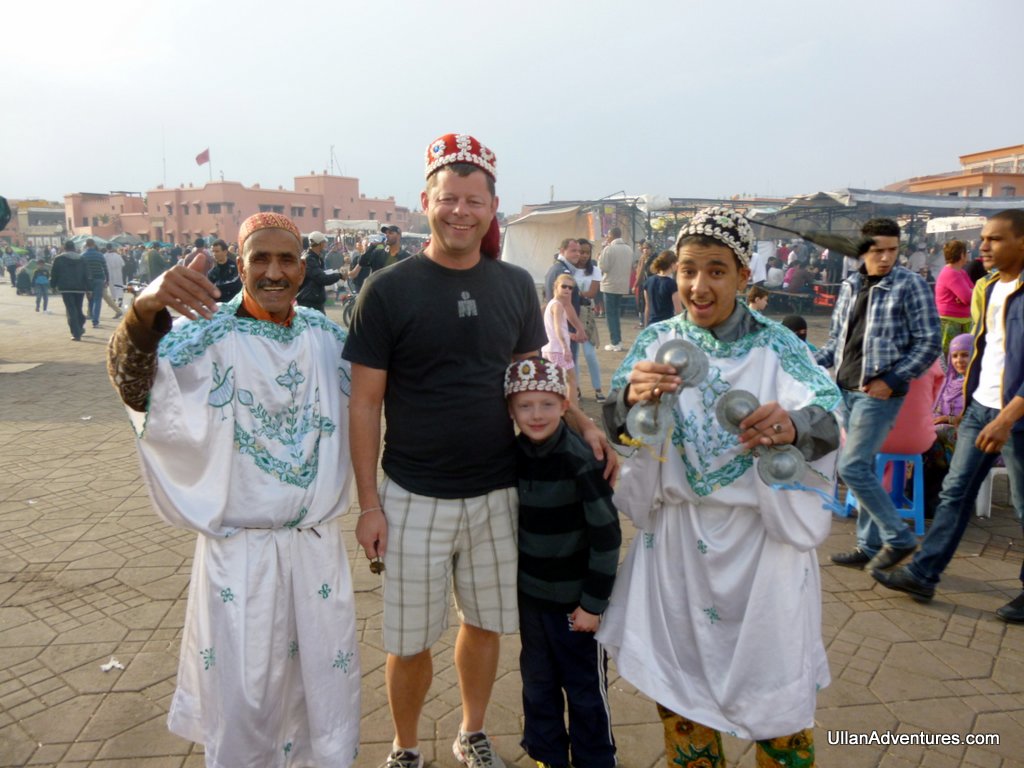 Here’s a glimpse of more of the daytime action at the square: 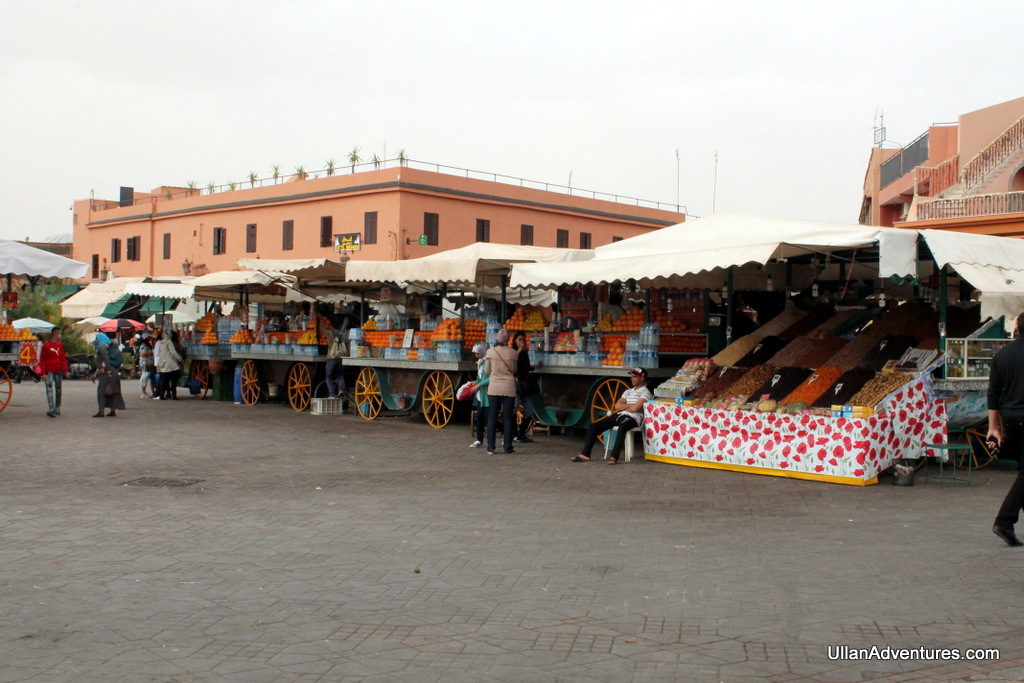 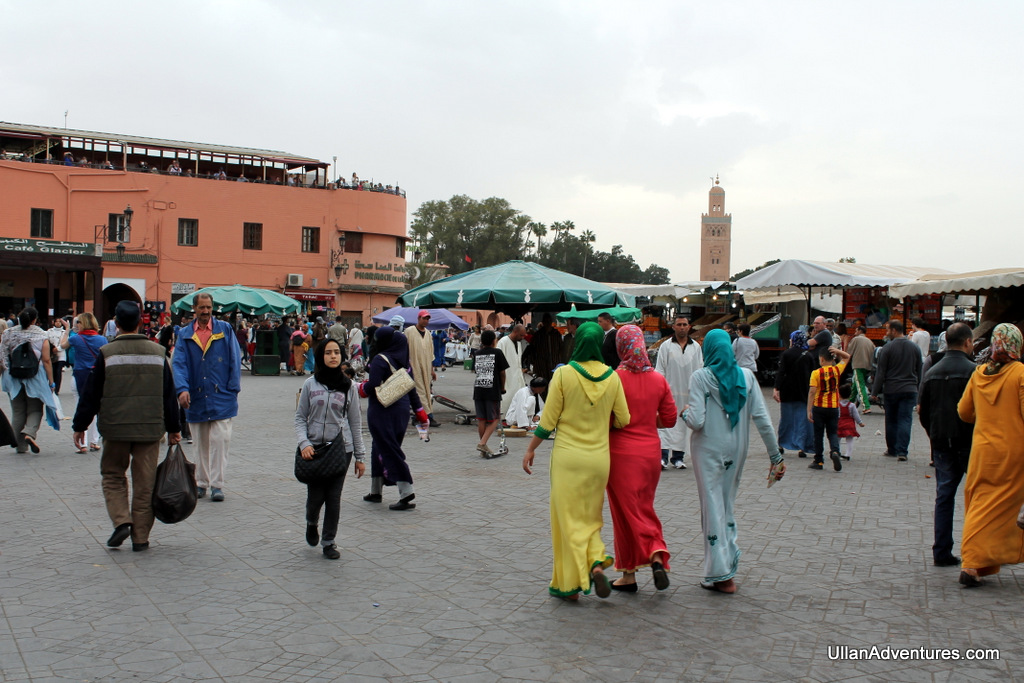 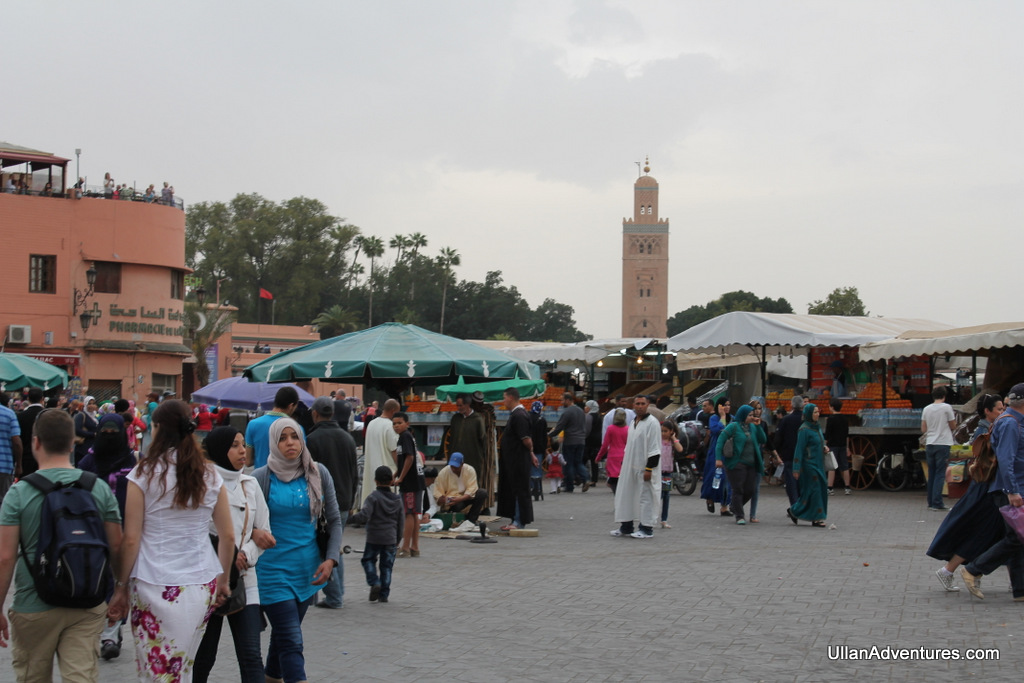 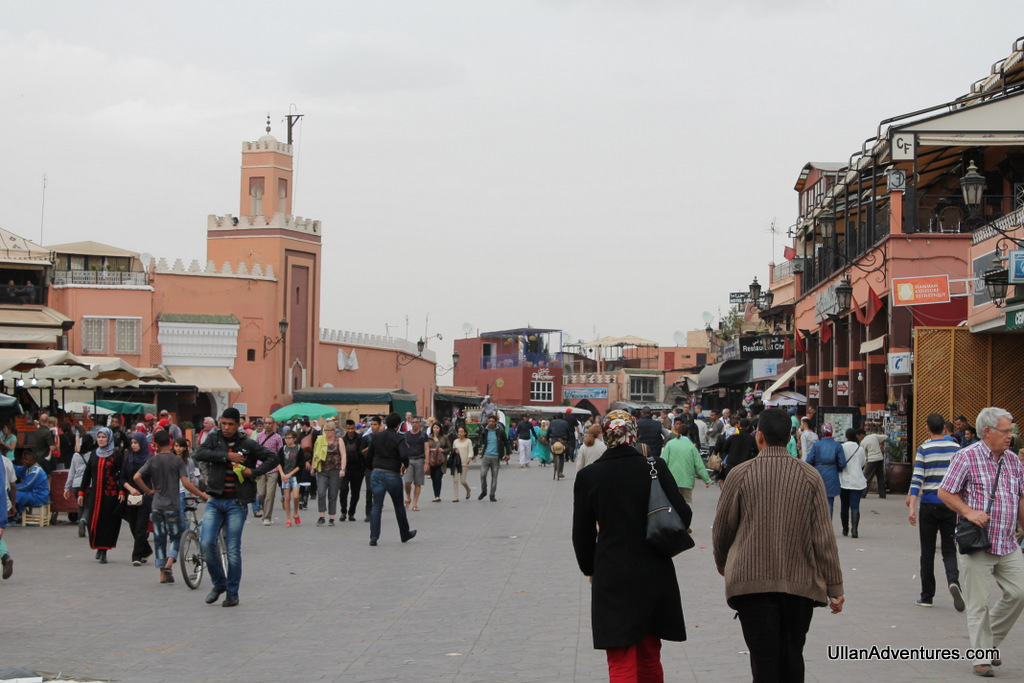 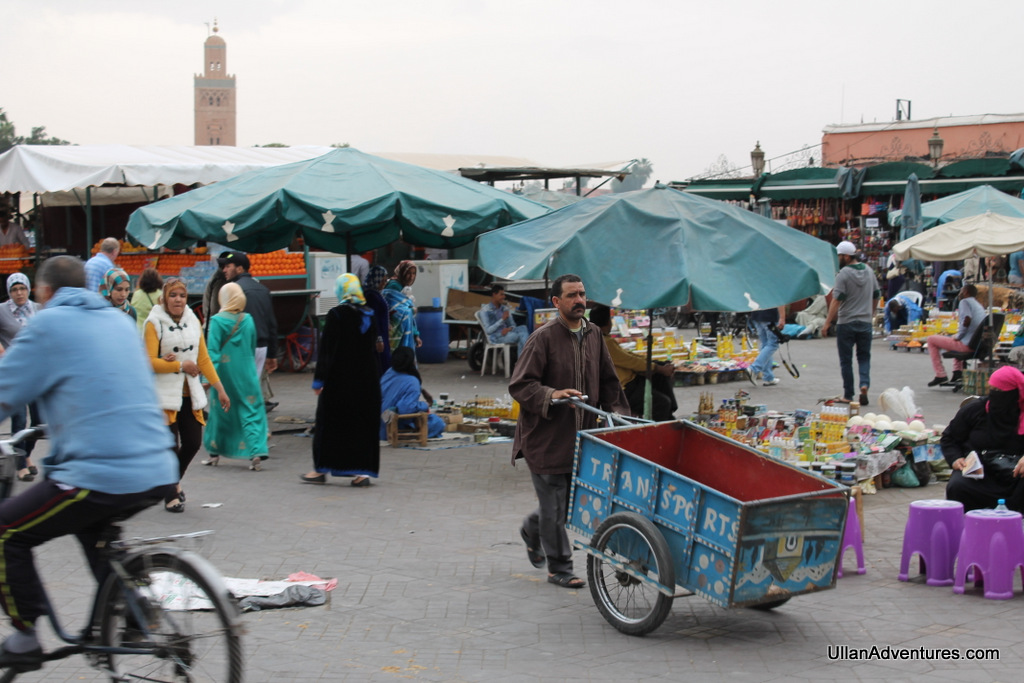 Around 4ish, a huge cluster of pop-up restaurants start to assemble in the middle of the square. 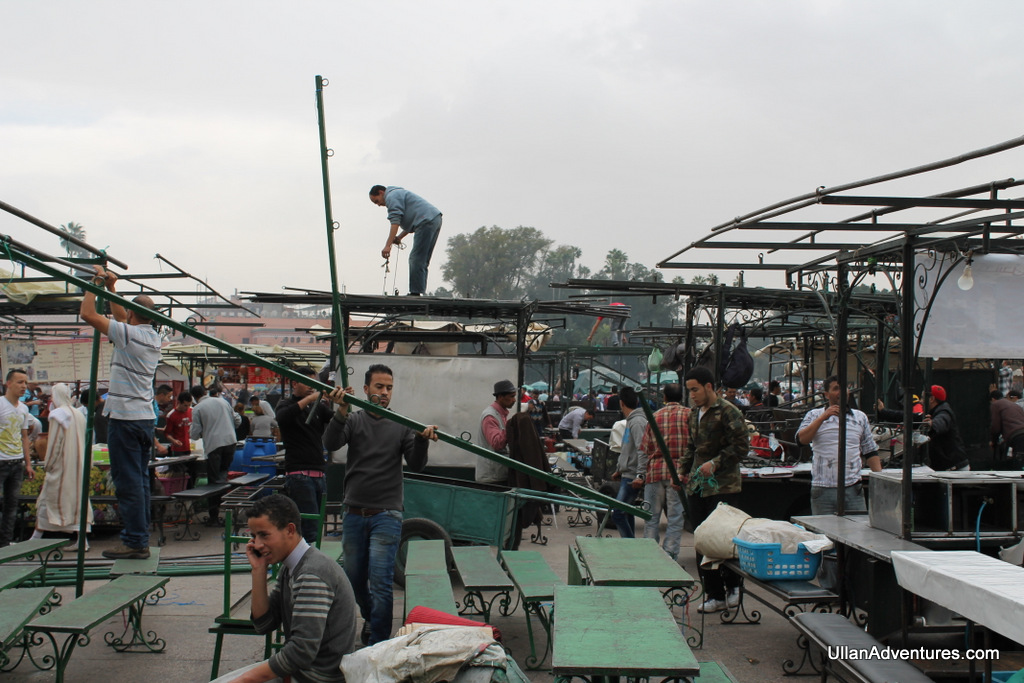 They assemble and take down these stalls every day.

Night falls, the crowds pick up, and the restaurants are in full swing. 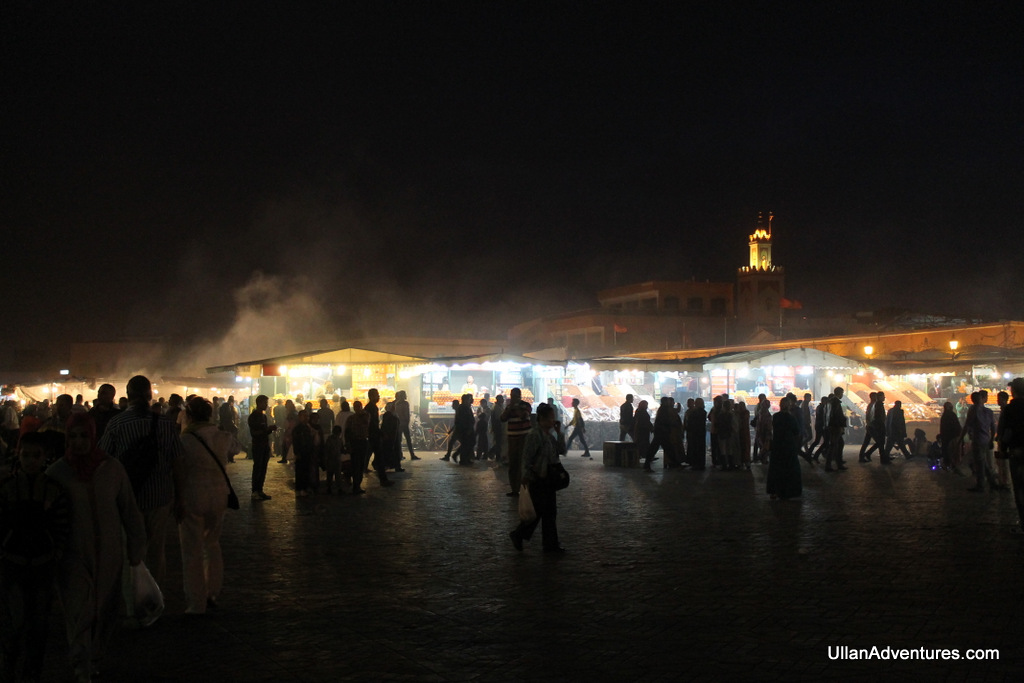 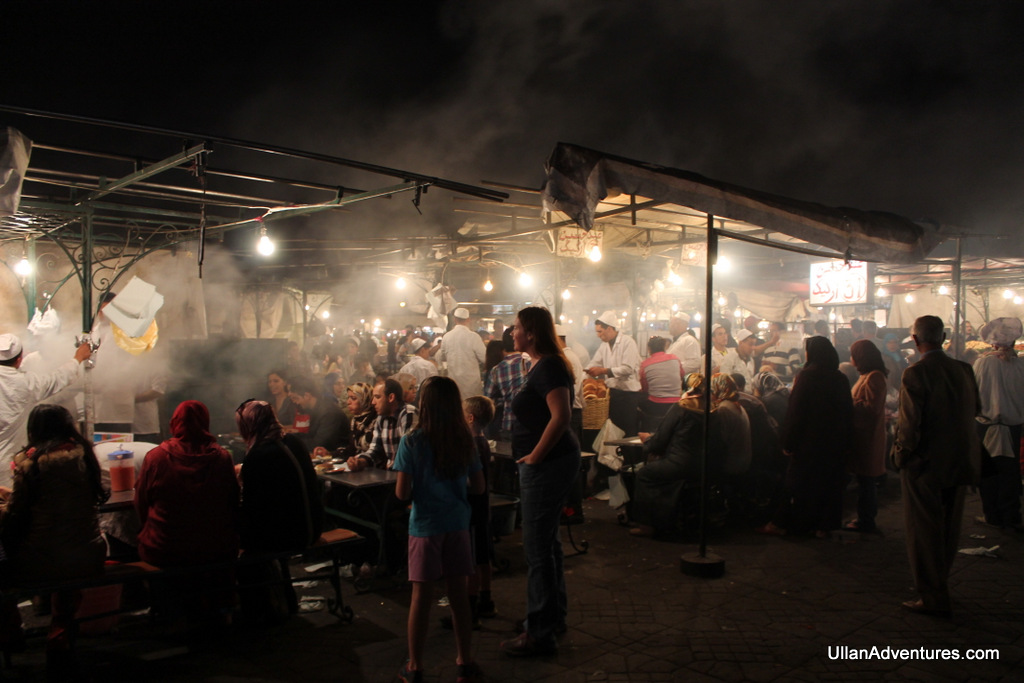 As you walk through the restaurant stalls, each place has one or two wranglers that shove a menu in your face and try to get you to eat there.  Mostly you just walk by them, but it’s annoying when you actually want to read the posted menus and they won’t leave you alone for 2 seconds.

We stopped and got kebabs, tagine, bread, couscous, and fritters for about $17 total. 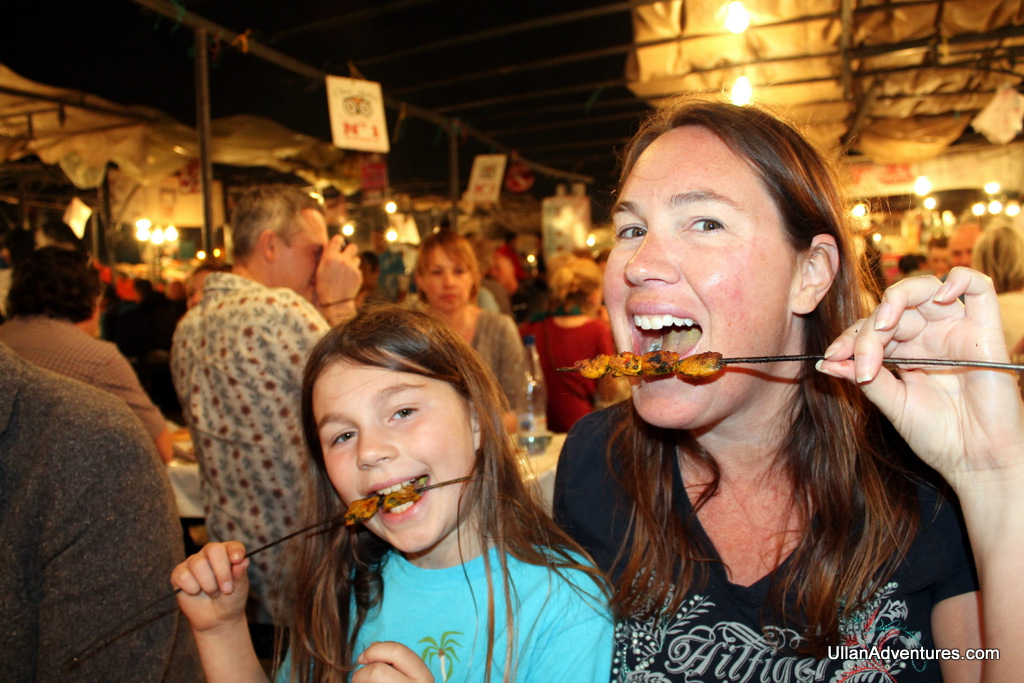 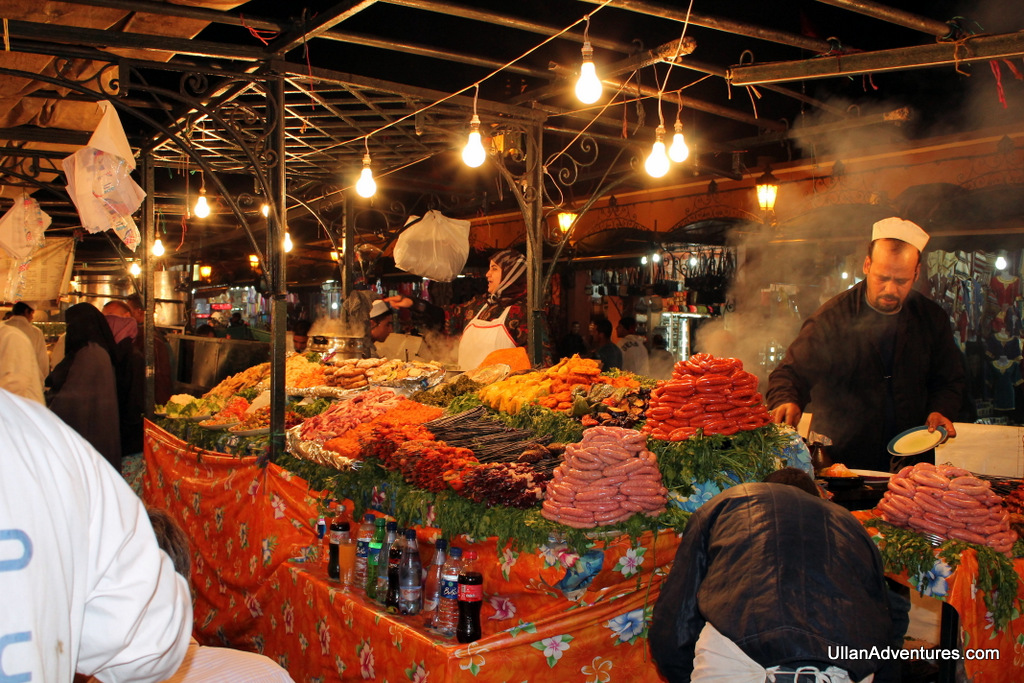 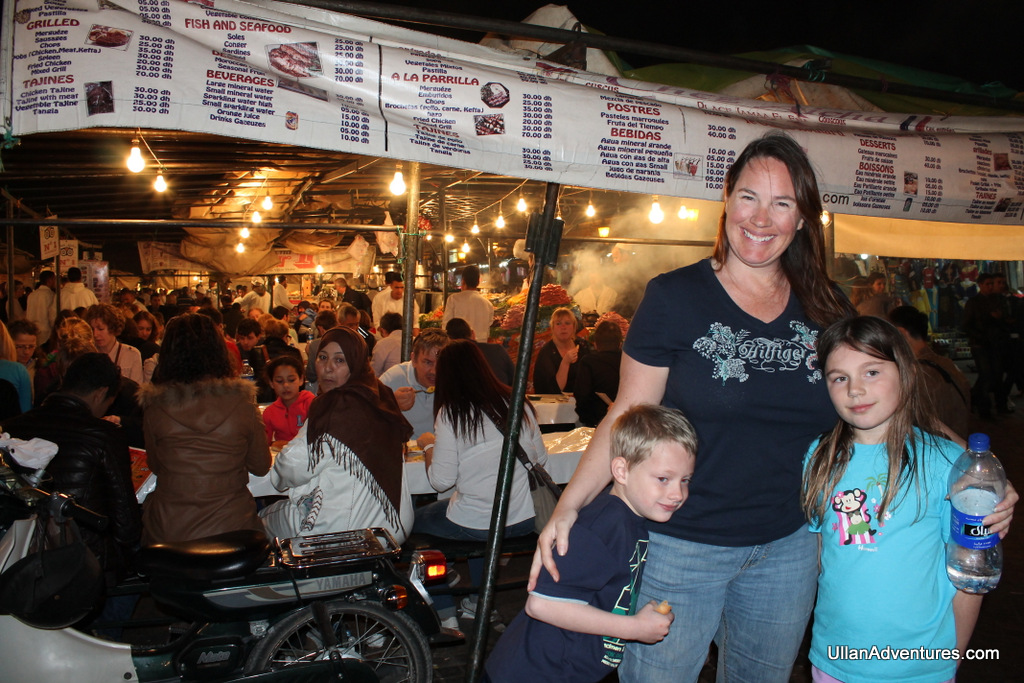 We also had a separate stop for some mint tea and dessert. 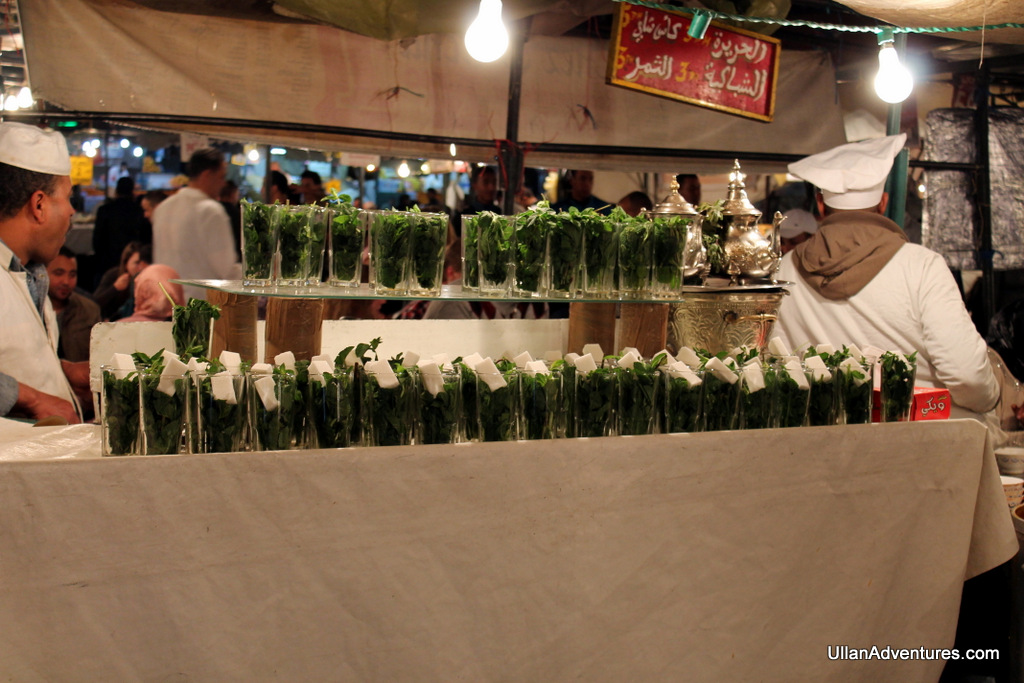 A few more random pictures of the action: 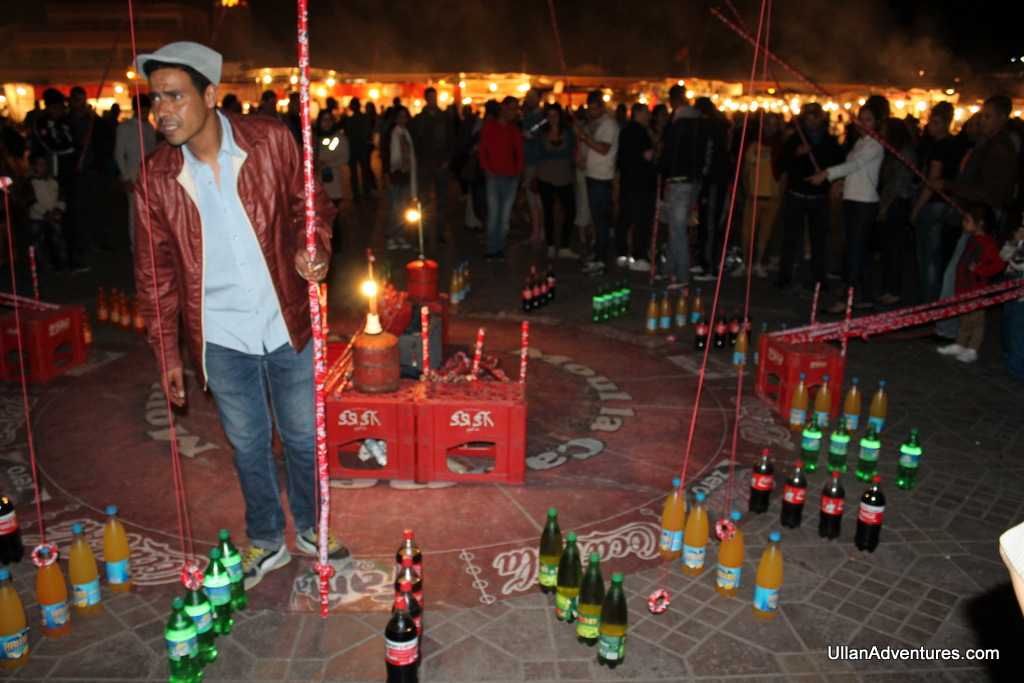 Finally, here are a couple videos where I pan around the square.

Be sure to see our other 4 posts about Marrakech

Next post: A Photo Tour of the Streets of Marrakech

Previous post: A Photo Tour of the Souks (shops) of Marrakech